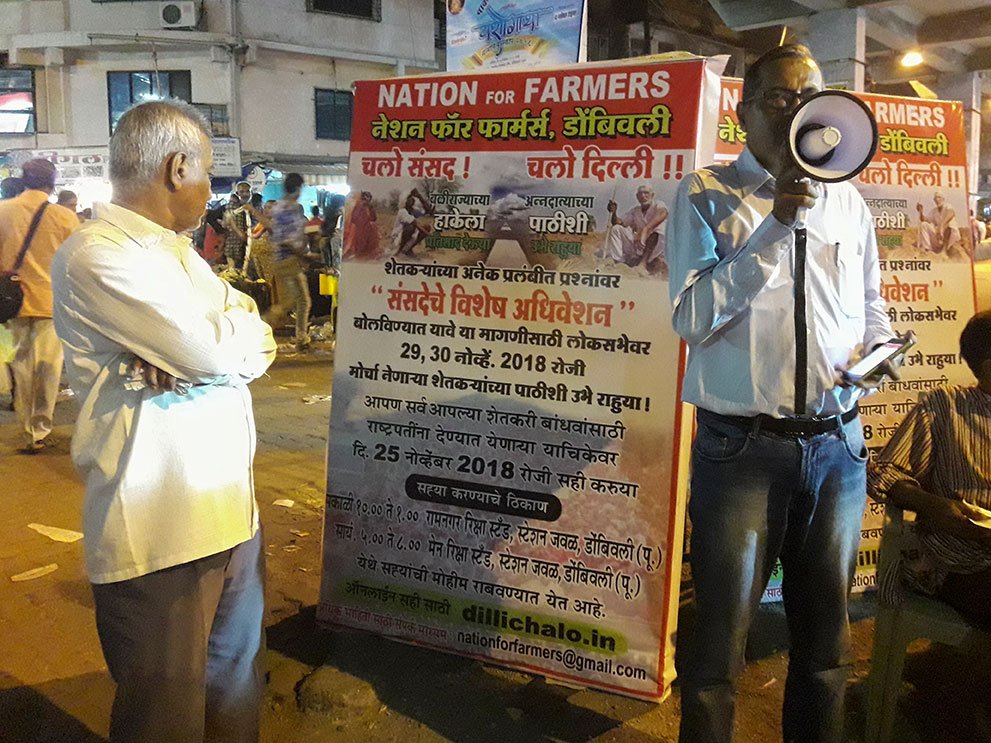 Driving autos and causes in Dombivli

On Sunday, autorickshaw drivers in Dombivli came together to ask commuters to sign a petition demanding a special session of parliament on the agrarian crisis, and support the farmers' march in Delhi later this week

"The president of India also needs food to eat. It doesn’t matter how much money you have. You can't eat money, you need food,” said Sikandar Ghulam Nabi Sheikh. “And who brings you food?" he asked.

Sheikh, 36, is an autorickshaw driver in Dombivli. On Sunday, November 25, 2018, he joined his colleagues of the Kalyan-Dombivli twin cities (around 45 kilometres from Dadar in central Mumbai) for a petition campaign to create urban support for the farmers of India.

The drivers assembled outside Dombivli (East) station at Ramnagar rickshaw stand from 10 a.m. to 2. p.m., and at the main rickshaw stand from 4 p.m. to 9 p.m. A team of 7-8 rickshaw drivers, their friends and union activists placed a ‘Nation for Farmers’ hoarding on the ground that called for a special session of Parliament.

Others sat at a table with pamphlets and copies of the petition in Hindi, English and Marathi. The petition, addressed to the president of India, seeks a special session of Parliament to discuss the country’s persisting agrarian crisis , as well as the escalating problems of other labour groups.

Dombivli station is on the Central line of the Mumbai suburban railway network. Thousands of commuters hurry in and out of the station every day, taking trains across the vast Mumbai metropolitan area. Much like every suburban station, outside Dombivli East too are shops selling apparel, jewellery, stationery and more. There are banks, ATMs and printing services. Street vendors are parked on the pavements selling mobile phone covers, fruits, vegetables and numerous other items. There are tea shops and coaching classes.

To captivate people’s attention here amid the bustle and crowds, you must have something compelling to say. 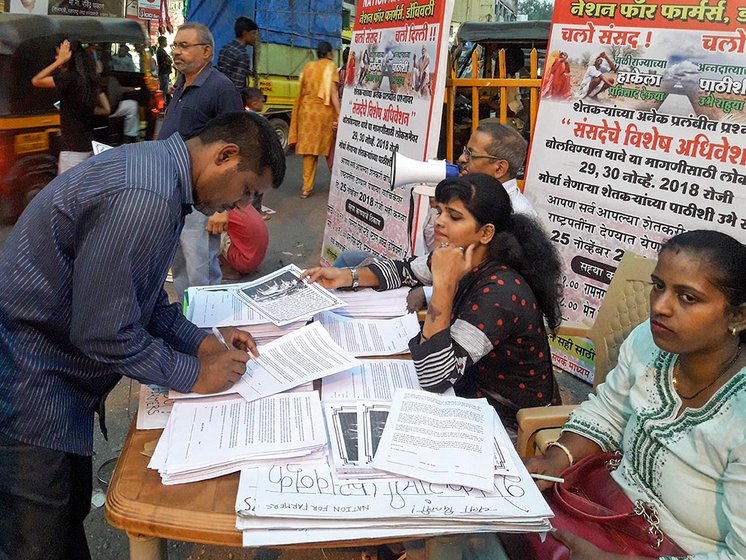 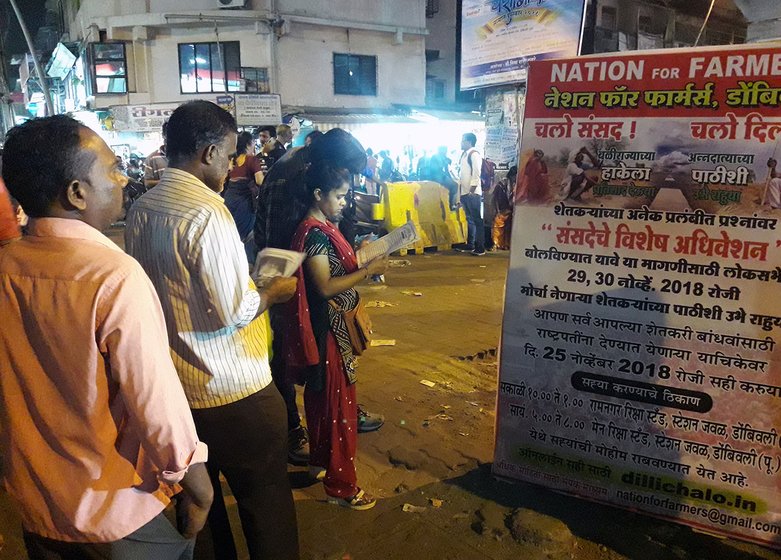 A team of rickshaw drivers and activists placed a ‘Nation for Farmers’ hoarding on the ground; others sat at a table with copies of the petition

When Sheikh and his friends spoke into a megaphone, describing the farmers’ problems, people stopped and listened. They paused in their hurry and read what the hoarding said. Others had questions for the volunteers at the desk. And many walked to the desk and asked, “Where do I sign?”

The autorickshaw drivers had come together though the Lal Bavta Autorickshaw Union, of around 1,000 Dombivli-based members, affiliated to the Communist Party of India. A week before this railway station campaign, on November 17, the Dombivli chapter of the Nation for Farmers was formed at the union’s office at Tilak Chowk, around a kilometre from the station.

"The Kisan Long March had a profound impact on national polity. When its architects appealed to take it further to city folks, I felt it a duty [to participate]," said V. Devan.

When around 40,000 farmers had marched for 180 kilometres from Nashik to Mumbai, in March 2018, the middle class residents of Mumbai and Thane had been very supportive. It was an inspiring milestone, and over the last several weeks, ‘Nation for Farmers’ (NFF) groups have come up in many cities and towns, including Aurangabad, Bengaluru, Chennai, Delhi, Hyderabad, Kolkata, Nagpur and Pune. Like the NFF group in Dombivli, these groups too have urged citizens to sign a petition to the president.

These efforts are a part of the All India Kisan Sangharsh Coordination Committee’s call – supported by around 200 farmers' groups and other organisations – for a march to Parliament in Delhi on November 29-30 .

To get the Dombivli NFF group moving, Devan and Kalu Komaskar, president of the autorickshaw union, invited friends, colleagues and fellow activists to a preparatory meeting. Devan is originally from Irinjalakuda town in Thrissur district of Kerala and a Dombivli resident for 38 years; he runs a small machinery business.

"I saw a news story of a farmer who committed suicide in Maharashtra. I broke down watching the faces of his family members," said an emotional Sujata Khairnar, a teacher who responded to Devan’s invitation. “If we don't have it in us to care for farmers, let us at least think of their families.” 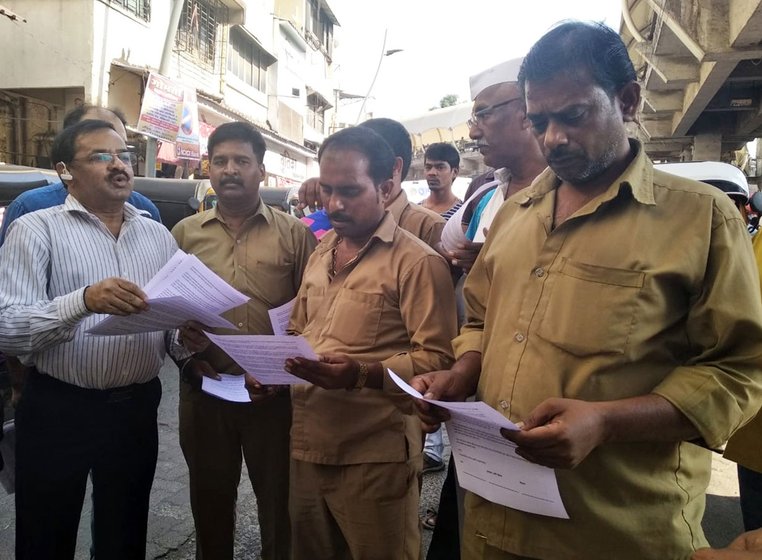 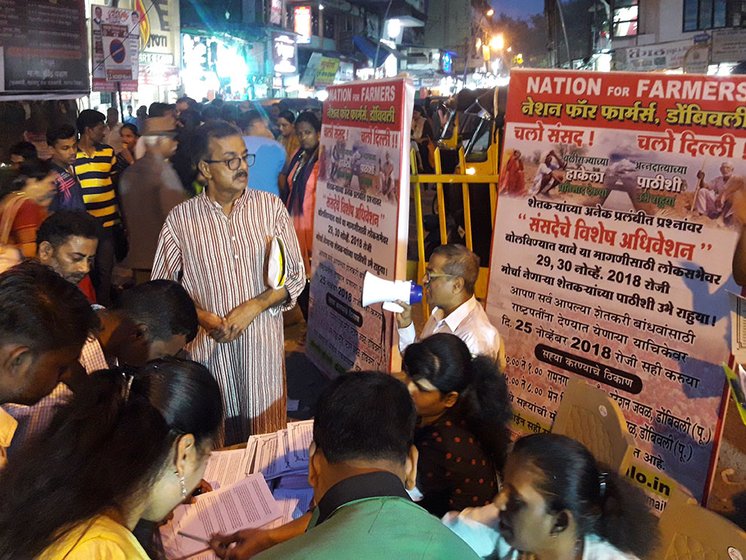 Left: Kalu Komaskar, president of the autorickshaw union, invited friends, colleagues and fellow activists to a preparatory meeting. Right: V. Devan who initiated Nation For Farmers, Dombivli, looks on as Sujata Khairnar and her teammates at the desk assist Dombivli citizens signing the petition

Jalinder Bhoir, for example, a 52-year-old driver, said, "I am a son of a farmer. We still have a small piece of land where we grow rice, on the rural outskirts of Dombivli. Today my fellow farmer, my 'Bali Raja' [a mythological farmer king] is in peril. The number of suicides has doubled. This is because of wrong policies. I will make every passenger of mine aware of this crisis. I will do this with all my heart and passion. It is my duty. In my heart I know that the residents of Dombivli will respond."

So on Sunday, November 25, the NFF team led by the autorickshaw union, gathered in front of the two big rickshaw stands at Dombivli station, inviting people passing by to sign the petition.

And, just as Bhoir predicted, the people responded. On that first day of campaigning, in a day, there were nearly 1,000 individually signed petitions to the president. The same number of signatures were collected on Monday.

Among those who signed was Deepak Gupta, 48, a shopkeeper. "Farmers drown in debt and suffer. It is because of their toil that all of this is running,” he said, pointing at the neon lit boards, restaurants and shops. “They have to get the right price for their produce."

'I will make every passenger of mine aware of this crisis. I will do this with all my heart and passion. It is my duty. In my heart I know that the residents of Dombivli will respond'

Watch video: ‘Our biggest issue today is the crisis in farming’

Among those in the bustle that evening at the station was also 80-year-old Shantabai Vaghri, who has been selling vegetables and flowers on the streets of Dombivli for 60 years. "Our generation has been working on the streets of this city. The government does not cooperate with the farmers, with the worker, nor with the salaried people. I request the government to assist the farmer. Give them water. Assist them with seeds, cultivation and yield. Do good for your good citizens."

Many who signed the petition are from farm families too, or their parents were once farmers, such as Deepali Vare, 25, from Kalyan, who works at the Anandprem Credit Cooperative Society in Dombivli. “My family were rice farmers in Bhor in Pune district,” she said, “The farmers have my full support."

"We had been hearing of the farmer's plight. We saw this board on our way home from work and said to ourselves that we need to educate ourselves about this," said her colleague, 21-year-old Swati More."

"We lost our land… ” said Seema Rajan Joshi, from Kirloskarvadi in Sangli district, who has lived in Dombivli for 30 years and works as a cook. “I feel great pride and joy to associate with farmers. Farmers need to be given a fair price or debt relief.” 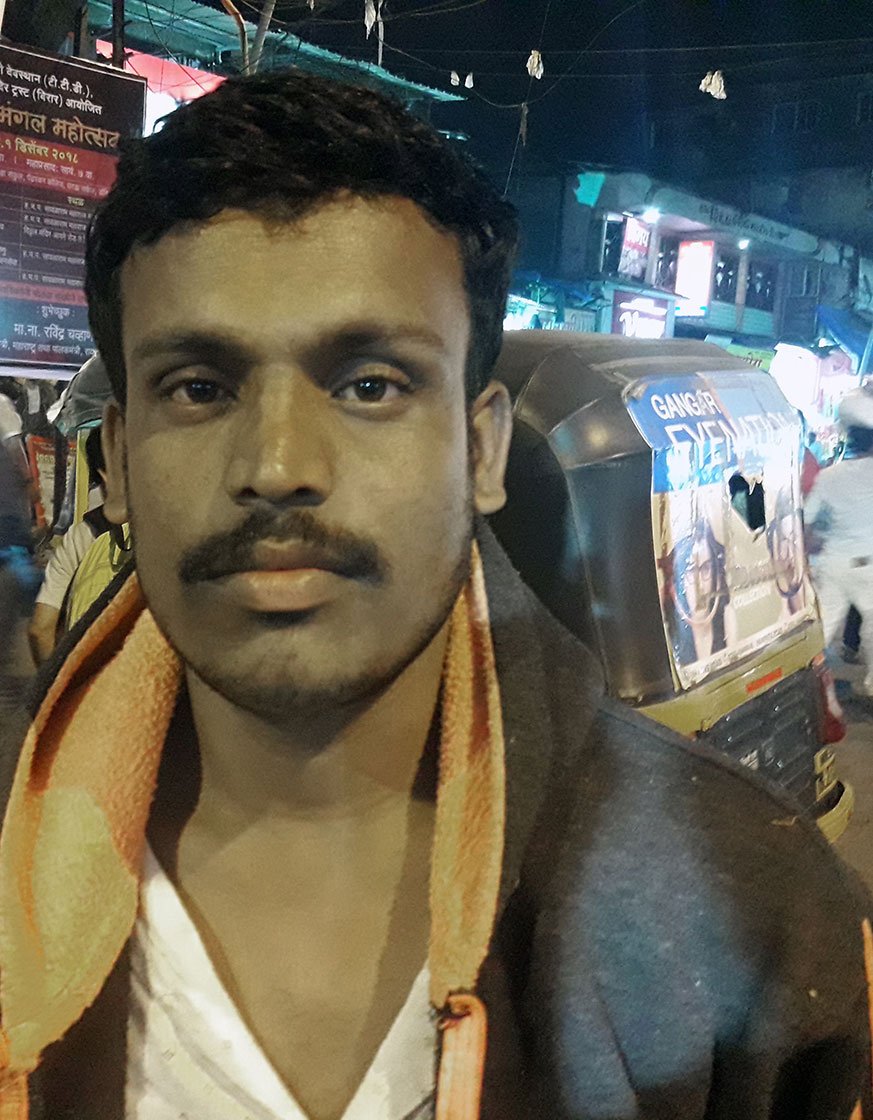 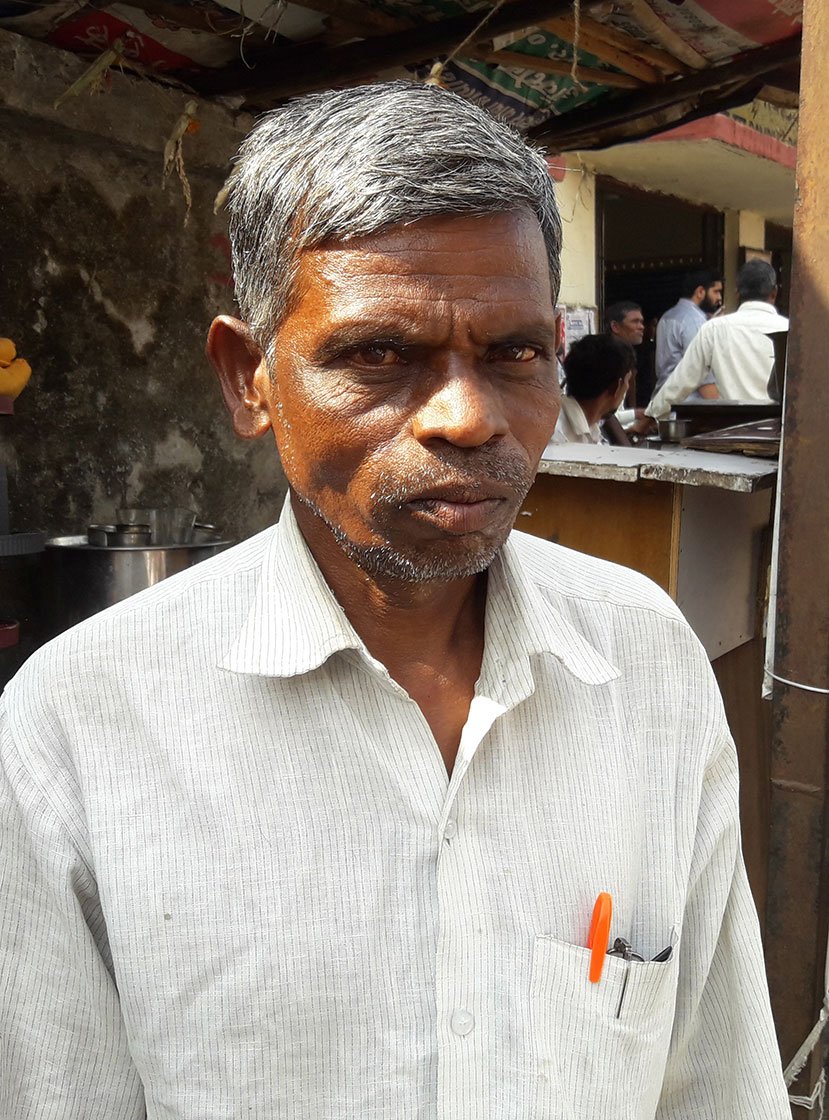 'Only a farmer knows what he goes through', said Nandkishore Argade (left) of Jalna district, a farmer looking for a job. Ashok Garud (right), a labourer from Aurangabad district, said, 'I want to go with the farmers to Delhi but my family needs money. I haven't been paid yet'

One of the petitioners, Nandkishore Argade, 28, grows cotton on his five-acre farm in Ambad taluka of Jalna district. "Only a farmer knows what he goes through. There is no water. For four years there has been no rain. We have a loan of Rs. 1.5 lakhs. We have applied but received no debt relief and no help". Nandkishore is wandering around the city searching for a job. “I have an interview tomorrow and nowhere to stay. I will be sleeping at the CST station in Mumbai tonight,” he said.

Ashok Garud from Dhamangaon village in Khuldabad taluka of Aurangabad district was brought to Dombivli by a contractor to fit tin roofs at the railway station. He cultivates bajra and cotton on five acres in his village. This year’s cotton yield has been destroyed by the pink bollworm, he said. He has a loan of Rs. 70,000 from a cooperative bank and a private moneylender. He has been working at the station for the past week, and said, “I want to go with the farmers to Delhi but my family needs money. I haven't been paid yet. I have to work.”

The petition campaign was the “first step to engage Dombivli’s citizens,” says Kalu Komaskar. “We will take this further. Each of our drivers will pass on these petitions to their regular passengers. They will have a conversation on the farming crisis and urge them to send the signed petitions directly to the president.”

But what is to be done of the thousands of signed petitions? "It is too heavy to post them,” says Devan. “Maybe we will personally hand them over to the president of India when we march with the farmers in Delhi on the November 29 and 30."