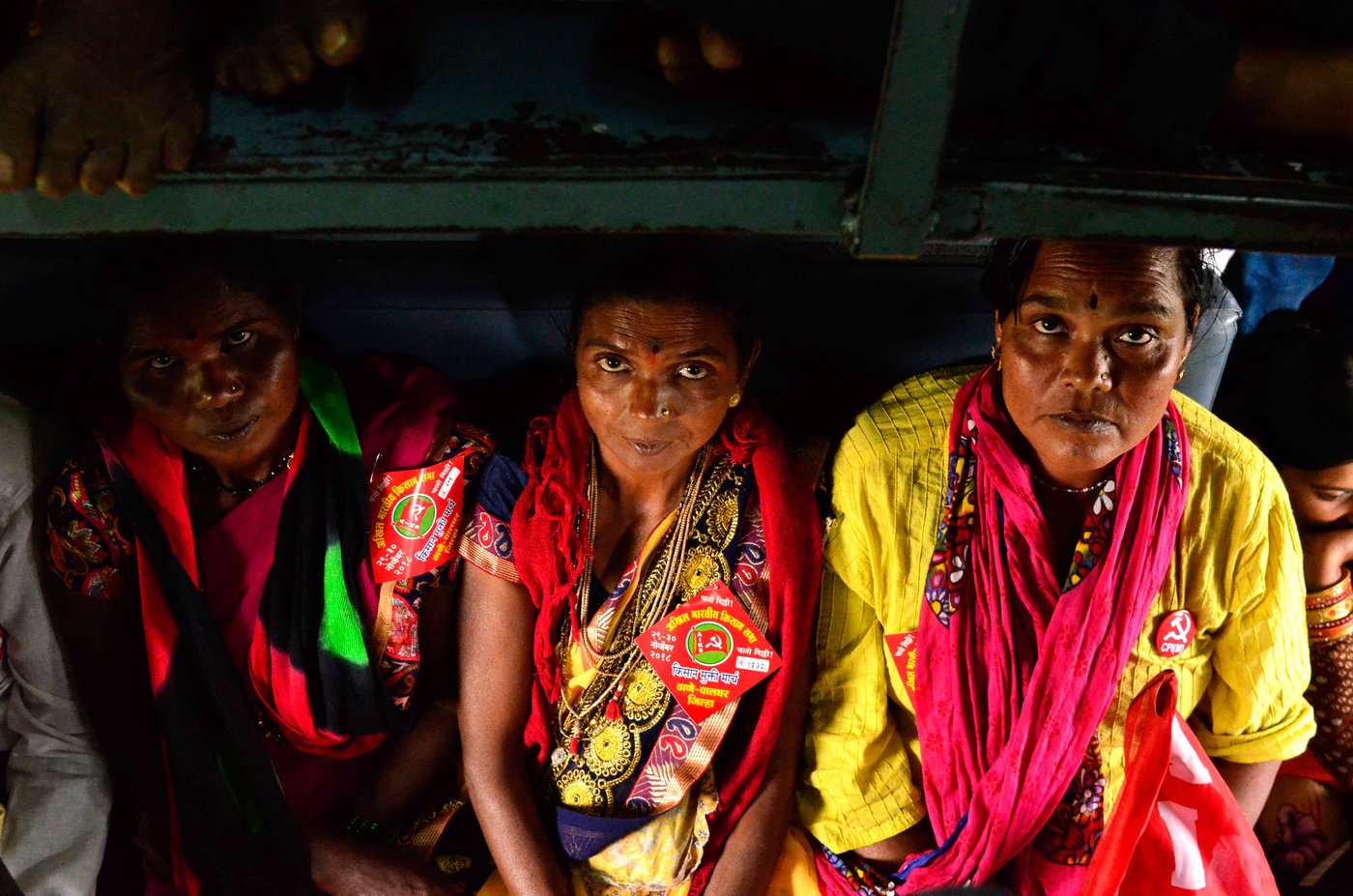 Dahanu to Delhi, struggling for space and more

Warli women farmers from Palghar district took three trains to reach Delhi for the farmers' march on November 29-30. In the crowded compartments, their songs of protest lightened the long journey

Not long after hearing the call of ‘Dilli Chalo’ – march to Delhi – Warli Adivasi farmers of Palghar district in Maharashtra started their journey on November 27, 2018. They took a suburban train from Dahanu to Virar station, then another train to Mumbai Central, where they took a third train to reach Delhi.

They were coming to Delhi for the landmark farmers’ protest on November 29-30, organised by the All India Kisan Sangharsh Coordination Committee, an umbrella group of 150-200 farmers’ and workers’ organisations. Prominent among these is the All India Kisan Sabha, which, because of its leadership during the historic Warli uprising led by the legendary Godutai Parulekar, commands wide support among the Adivasis.

After travelling continuously for over 24 hours in a compartment packed to crushing capacity, the nearly 100-strong Palghar contingent reached Hazrat Nizamuddin station. This is a record of that journey. 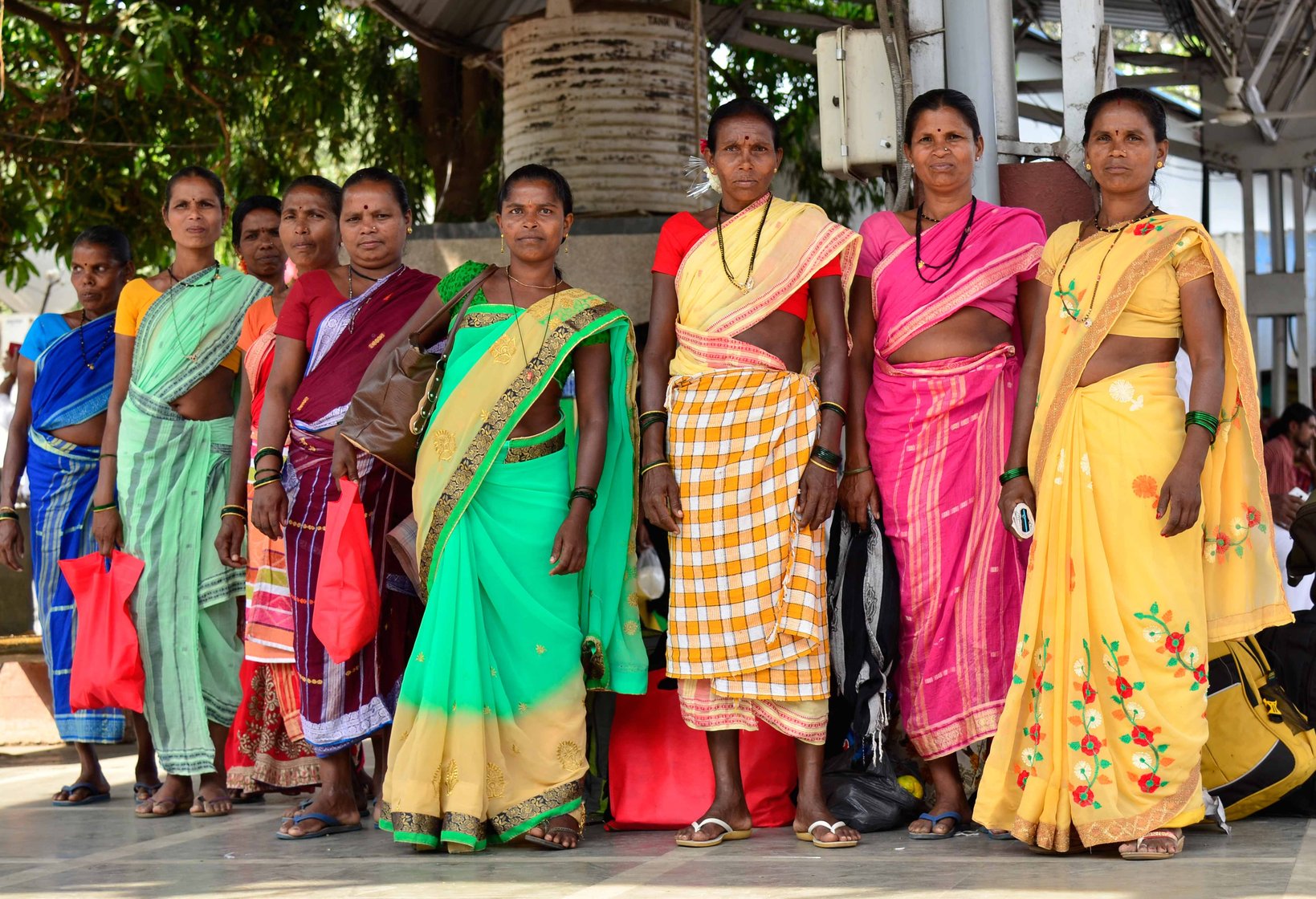 Meena Barse Kom, Sakhari Vansad Dandekar and others from Dahanu taluka of Palghar district assemble at Dahanu Road Station in the afternoon of November 27. 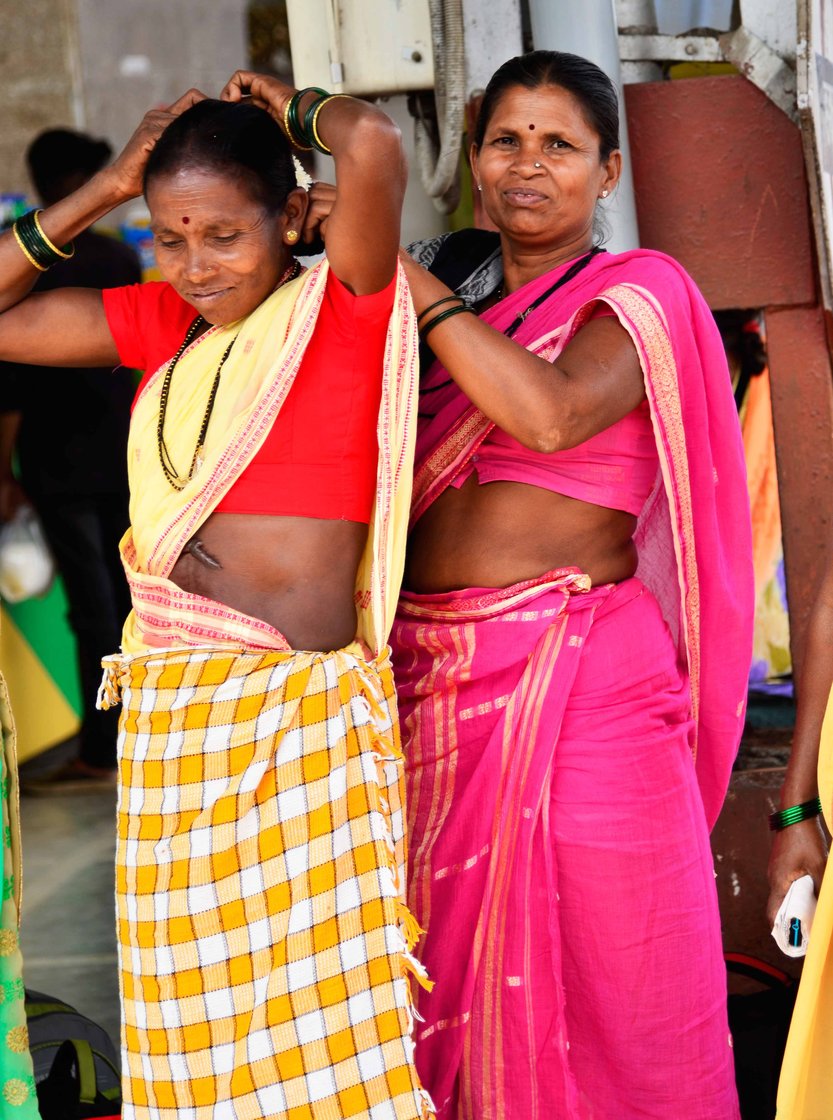 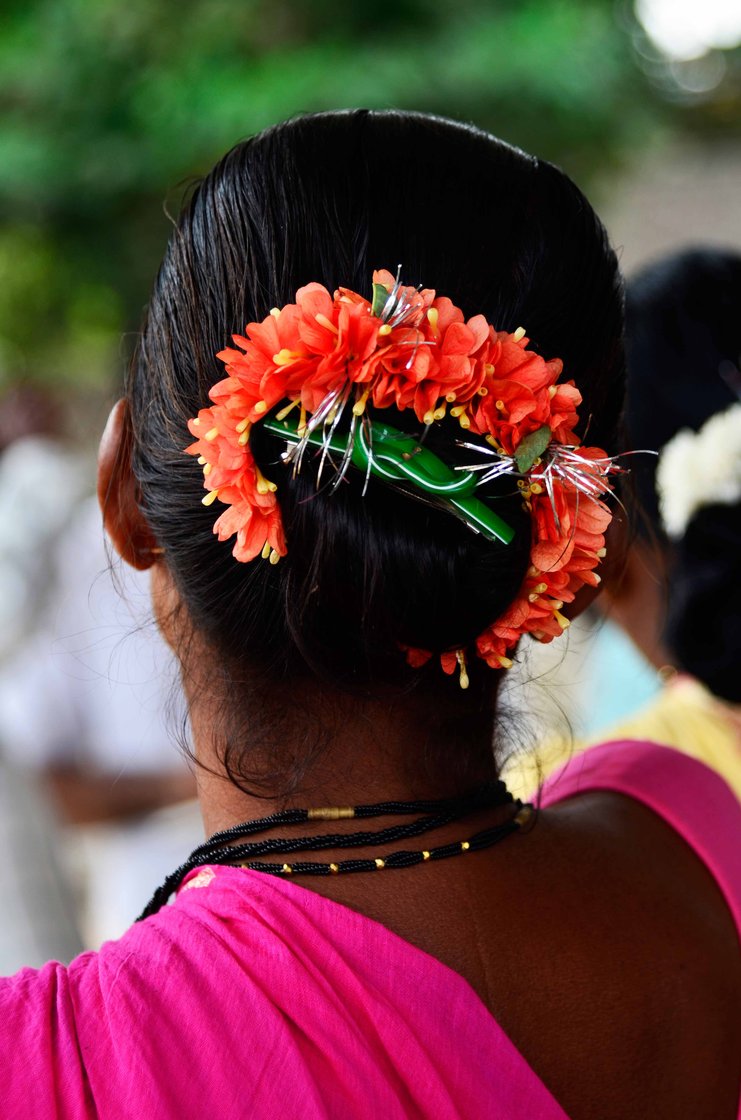 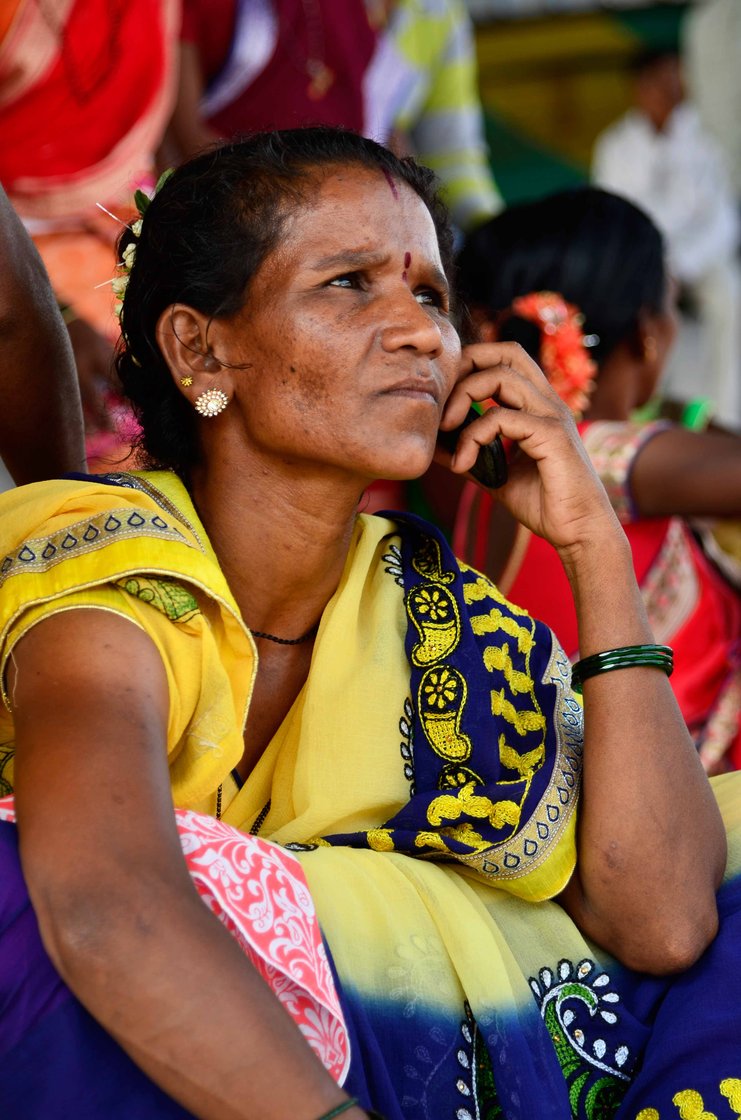 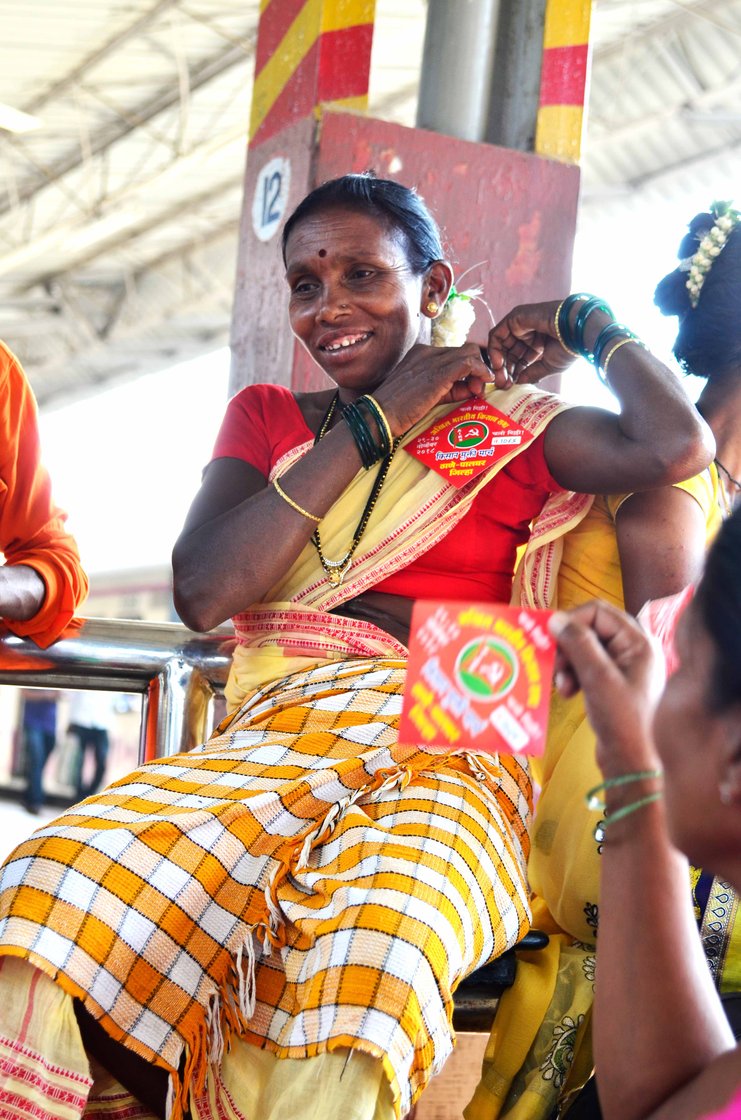 Neelam Prakash Ravte will be away from home for nearly a week. Her three children already miss her. Her youngest had fallen ill when she was at the Kisan Long March in March this year. He keeps phoning her. Meena has been associated with the Kisan Sabha for a long time. 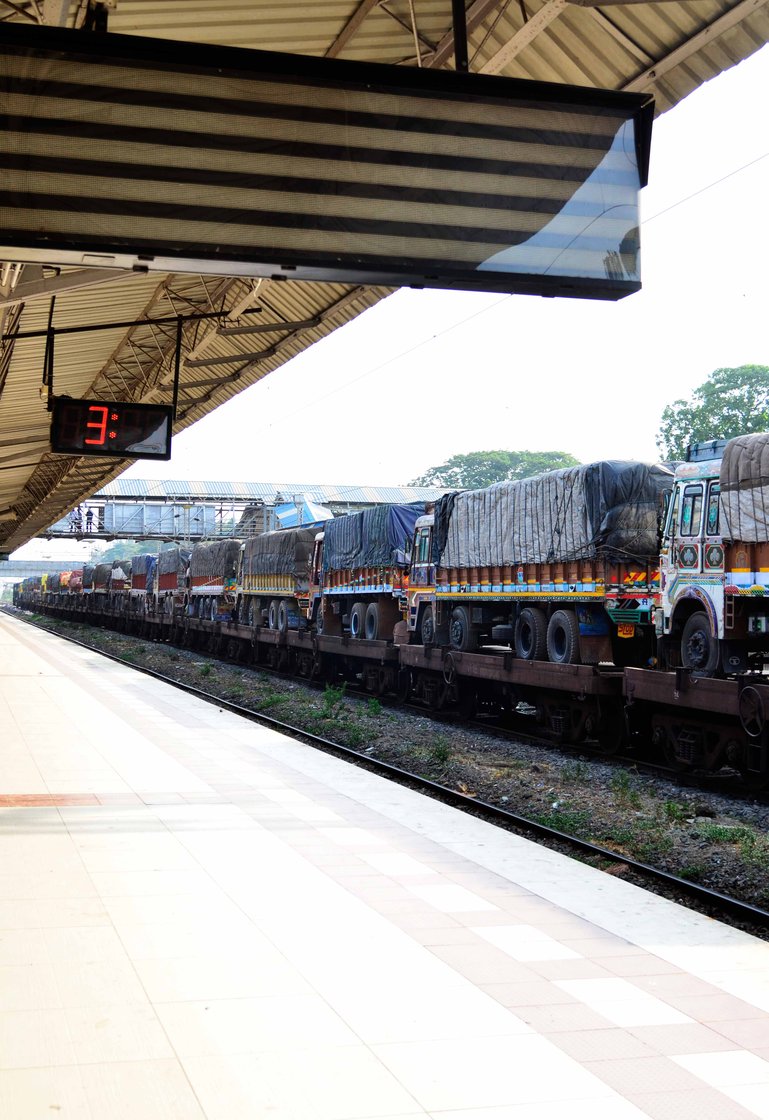 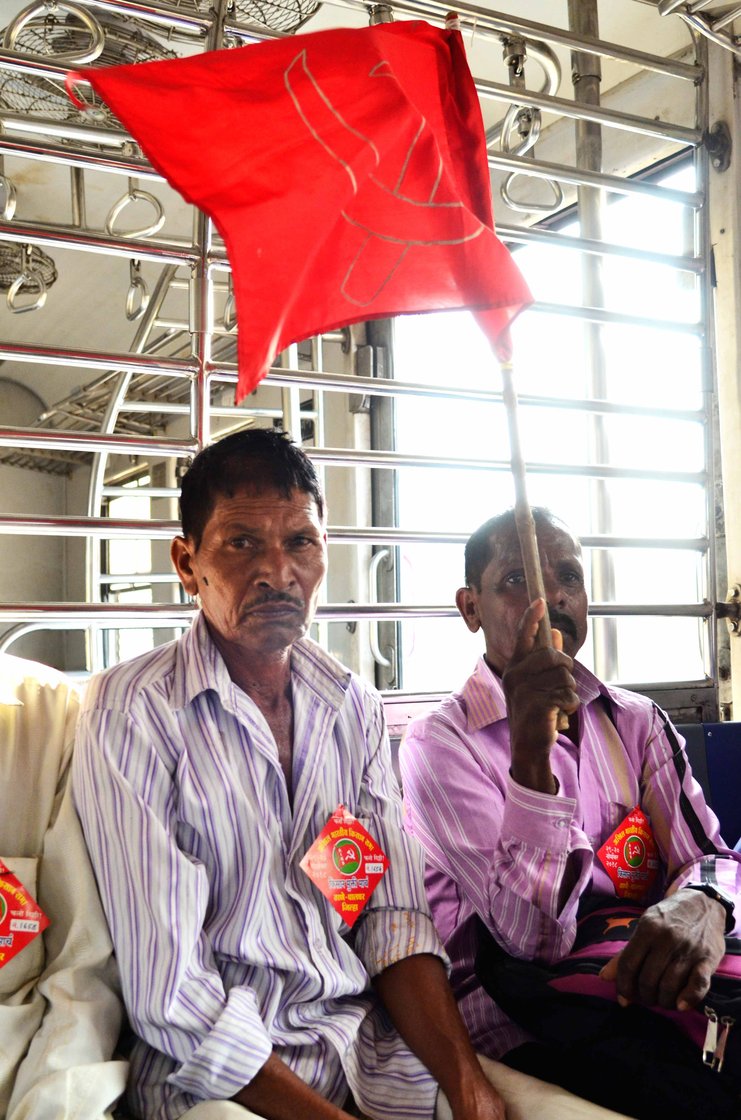 Dahanu Road station, around 144 kilometres north of Mumbai Central on the western line of Mumbai’s suburban railway network, is a busy line that ferries freight trains to and from Mumbai and the western states of India. 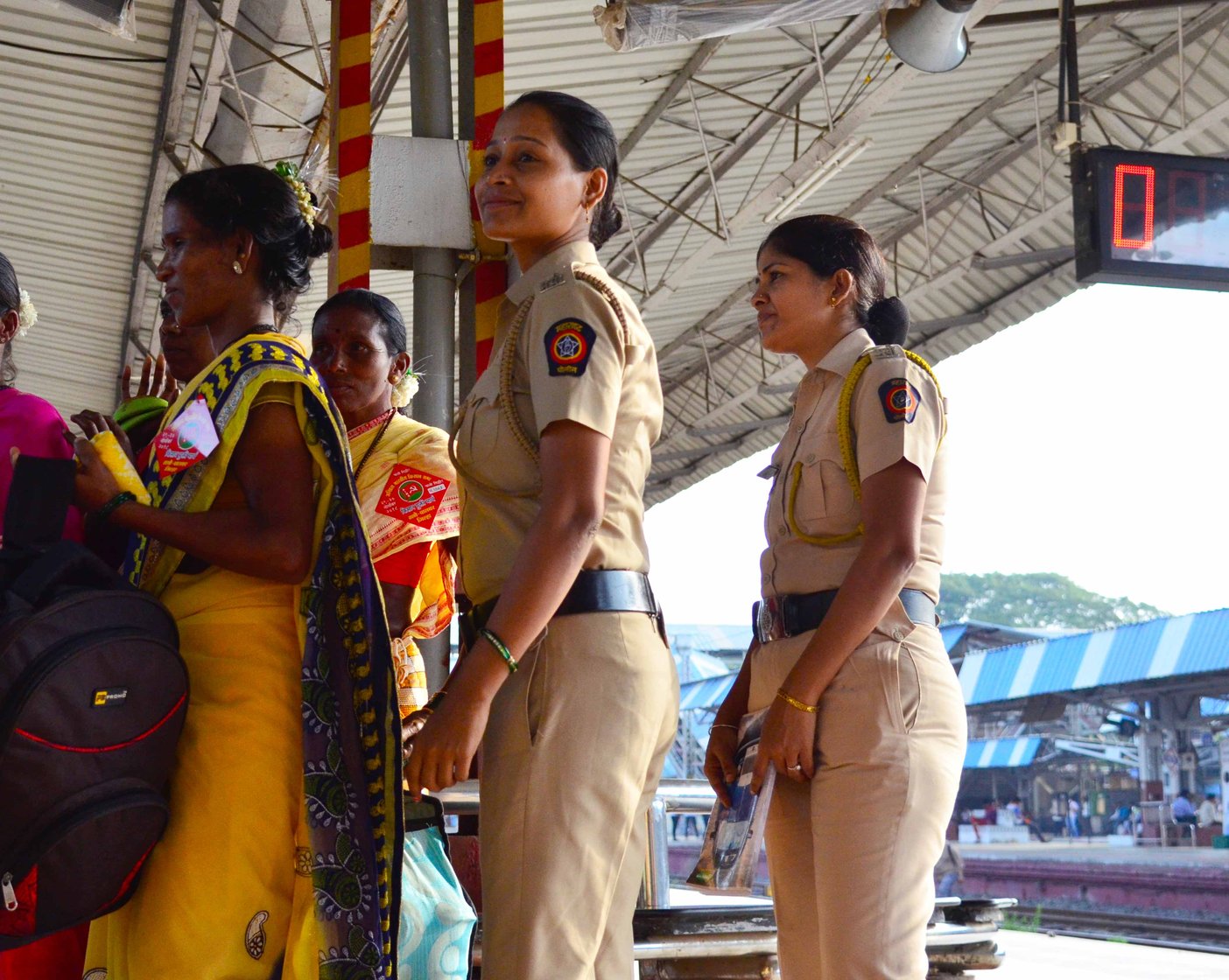 A gathering of Kisan Sabha activists attracts the police, who note down details of the march and the participants 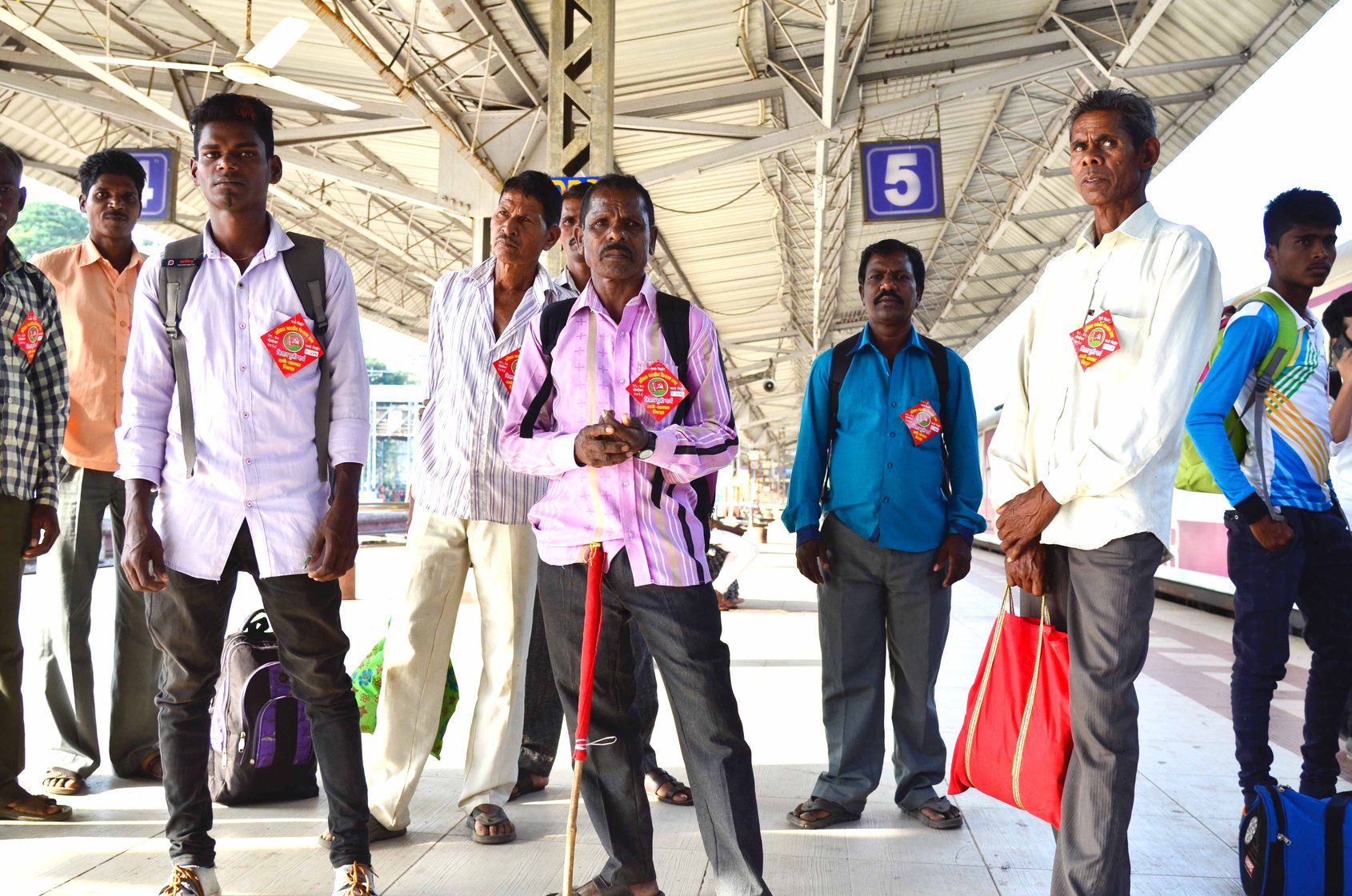 Farmers from other talukas of Palghar join their women comrades at Dahanu station. These men are from Vikramgad 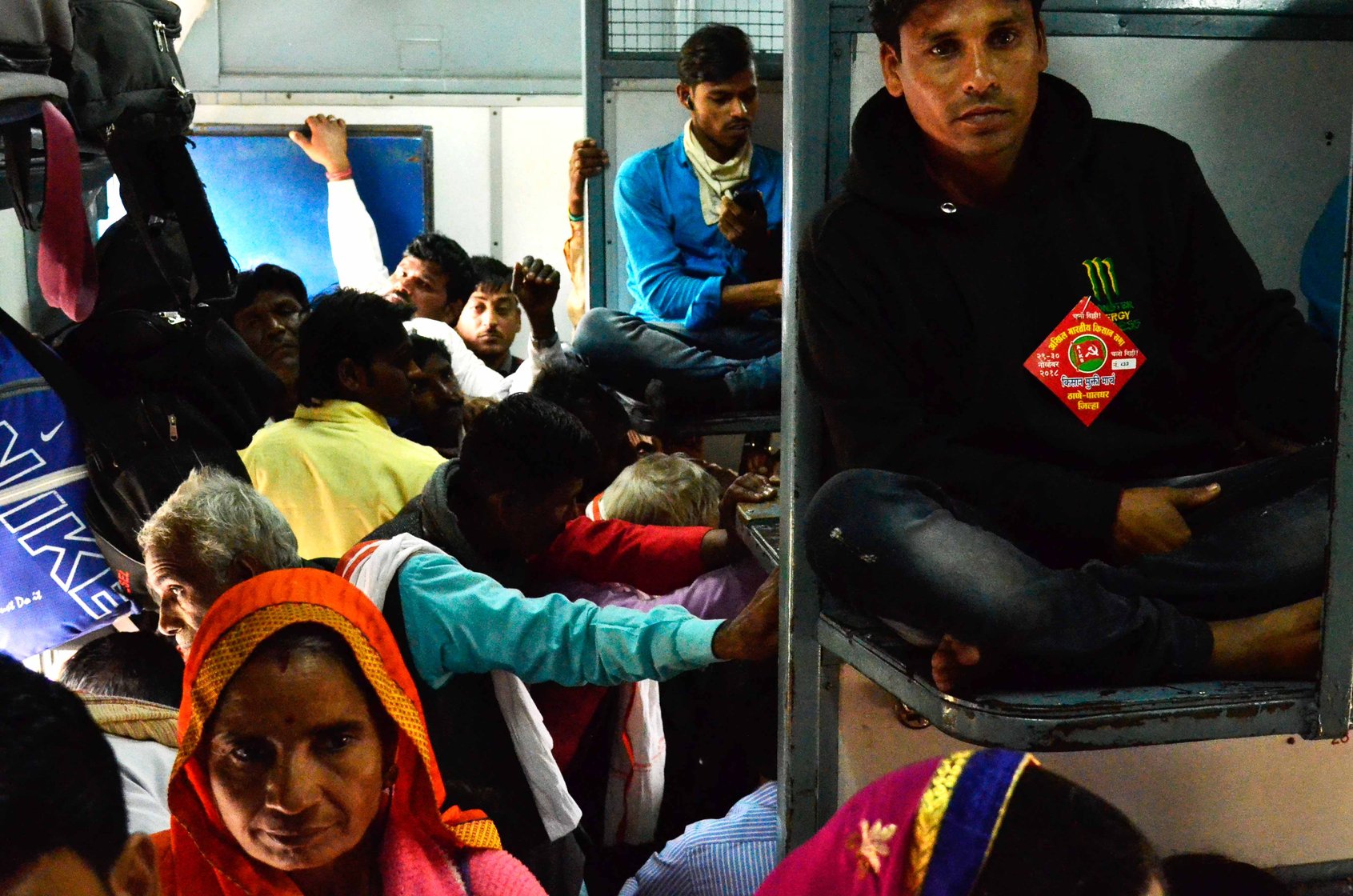 The train journey to Delhi is difficult. In one overcrowded general compartment,  200 passengers cram for nearly 21 hours. Around 100 of them are farmer-activists from Palghar. 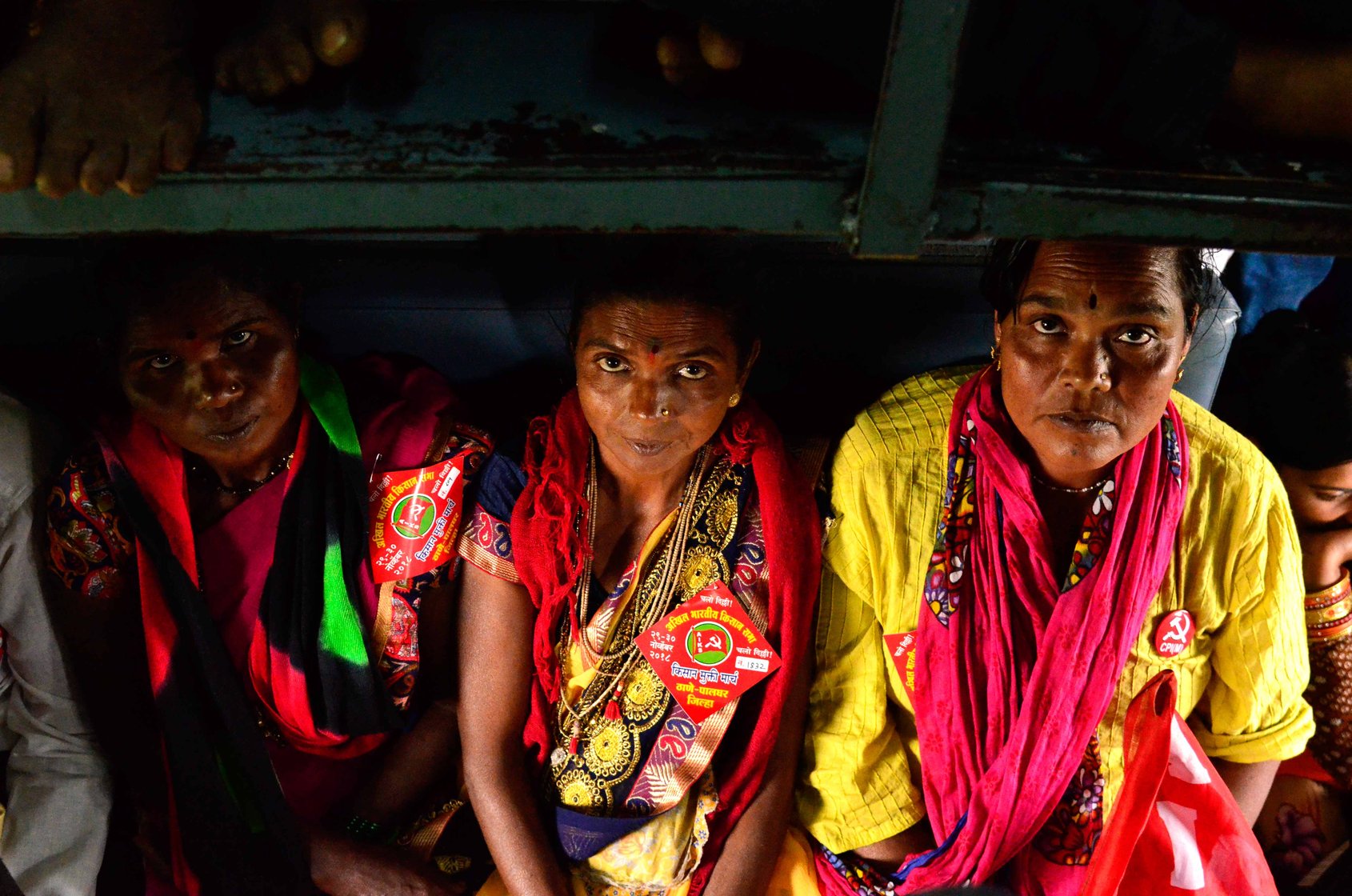 Sunita Walwi, 40 (first from right), from Dhamangaon village in Dahanu taluka of Palghar will sit in the same position for over 21 hours. A trip to the toilet involves literally stepping over many co-passengers sitting crushed-together in the passageway. Since they are all travelling in the unreserved compartment, they will lose their seats if they get up even for a toilet break. 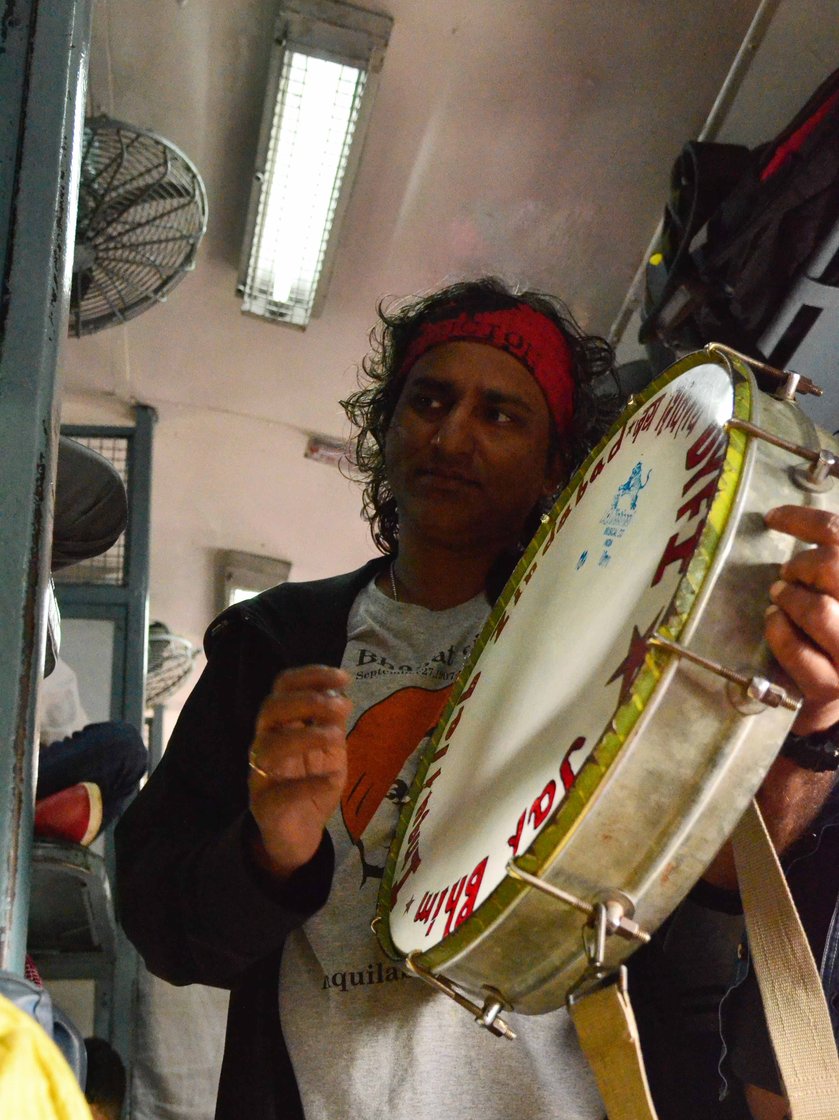 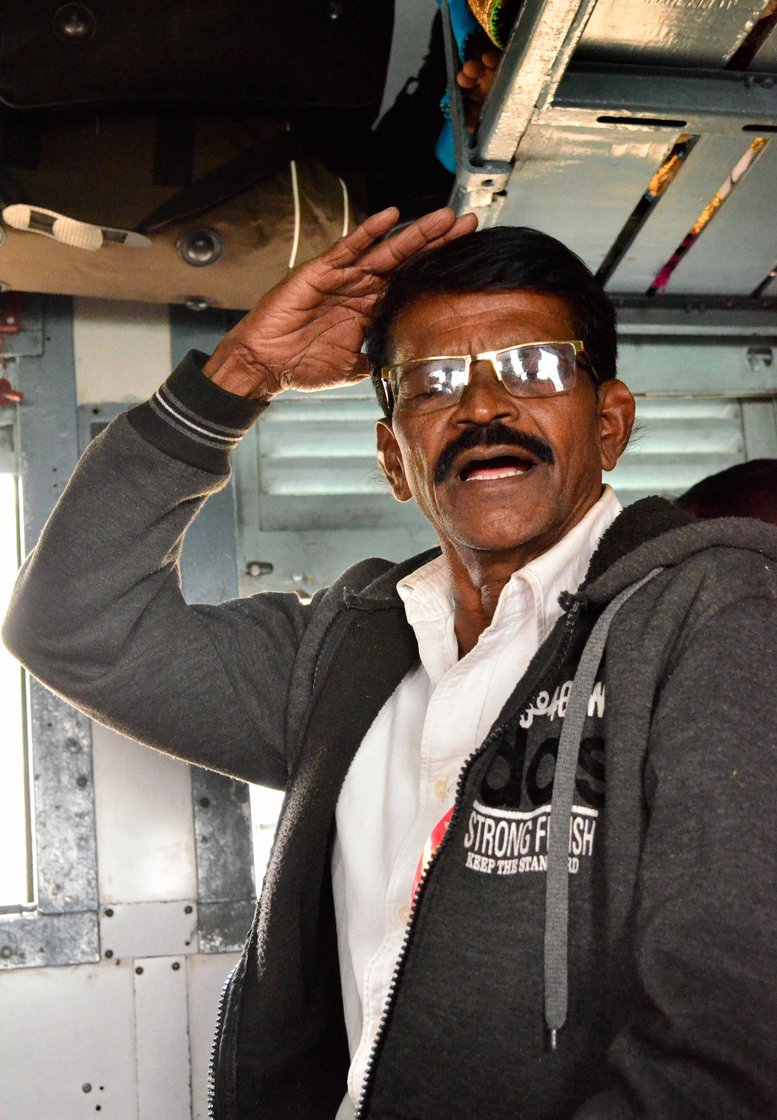 Despite the cramped compartment, the farmer-activists sing revolutionary songs to pass the time during this long and difficult train journey. Raja Gehla, a former Zilla Parishad member, sings songs he has written on the agrarian crisis.

Sanjeev Shamanthal from Jogeshwari, Mumbai, is one of the many middle class Mumbaikars going to Delhi to march in solidarity with the farmers. 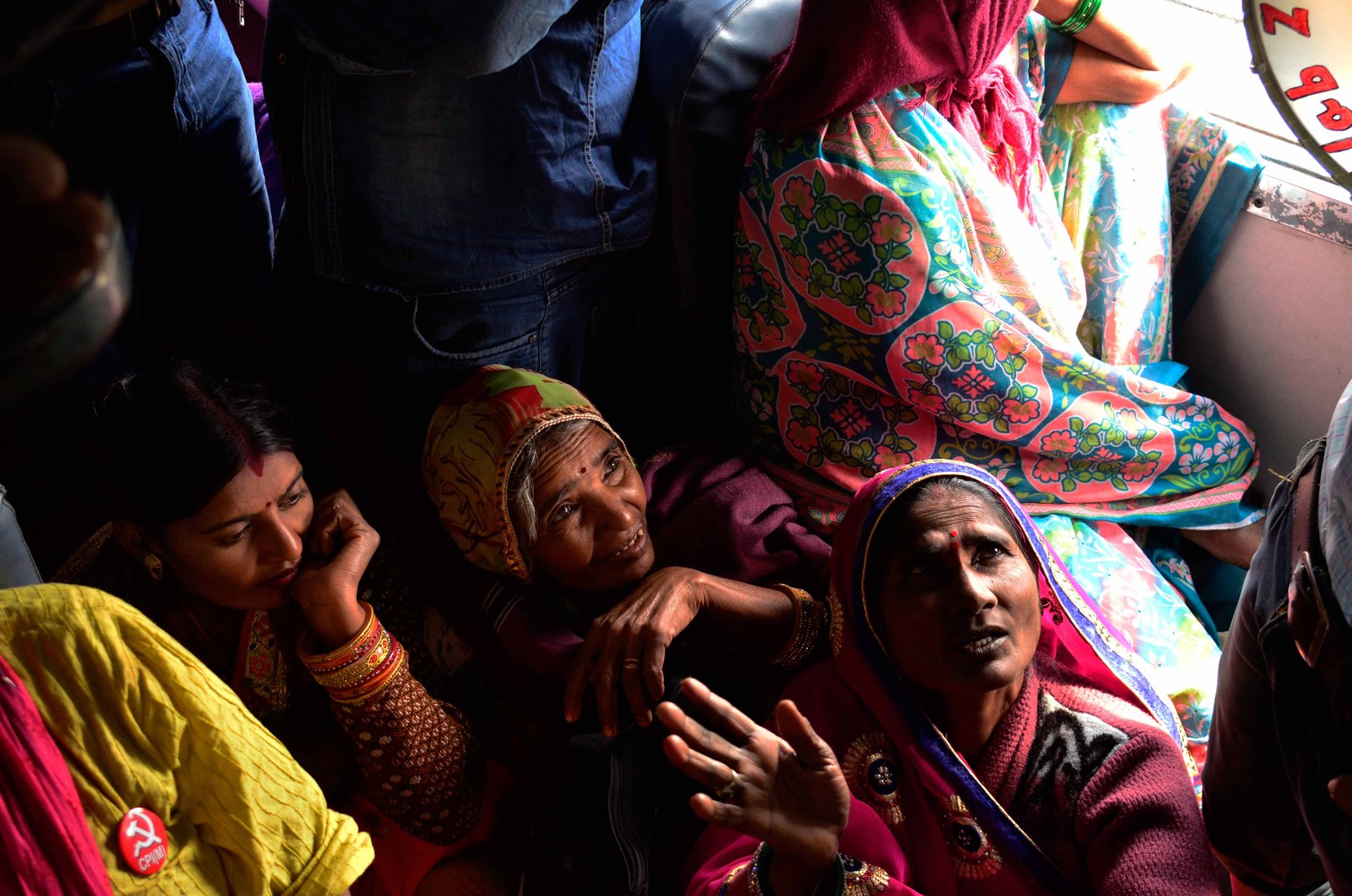 Women passengers from Rajasthan are curious about the discussions and slogans of the Palghar farmers. They are farmers as well. Manbhari Devi from Dablana village in Hindoli tehsil of Bundi district of Rajasthan tells us about how drought and dry canals have destroyed their jowar and wheat crops. Prembai of the Todabhim tehsil in Karauli district of Rajasthan says that the price of her farm produce never matches the input costs and her family has to also work as labourers on other farms to sustain themselves. A minimum support price for crops and mitigating the water crisis are among the major demands of the farmers’ march in Delhi. 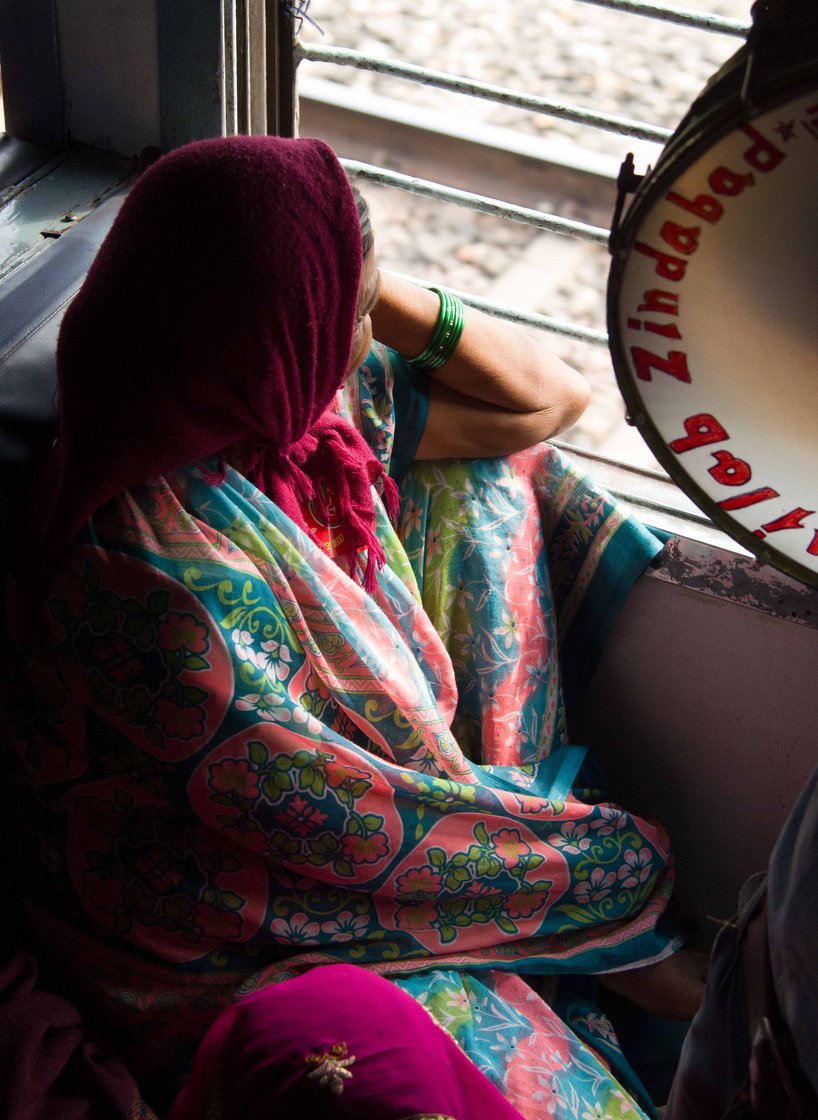 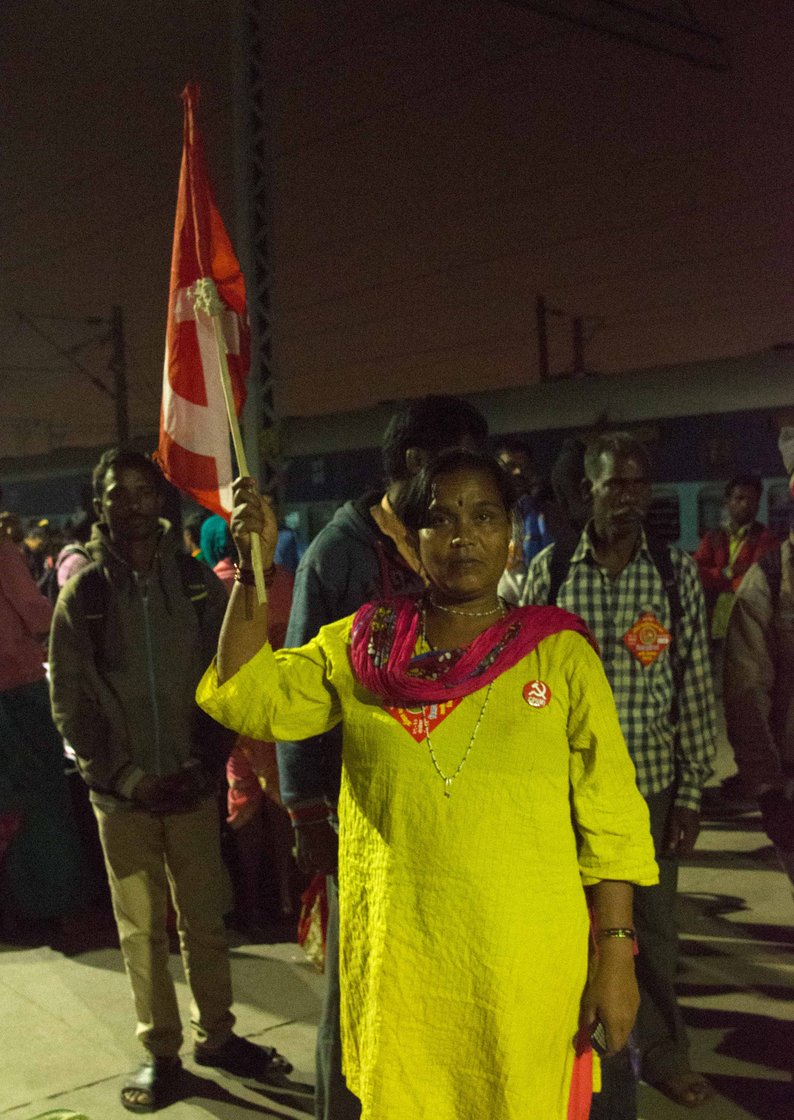 The two-day train ride is particularly hard on women passengers who sometimes have to face aggressive male crowds.

Sunita Walwi’s father was a Kisan Sabha activist. She was part of the Nashik to Mumbai Long March earlier this year, and said, ‘We will keep marching until our demands are fulfilled’ 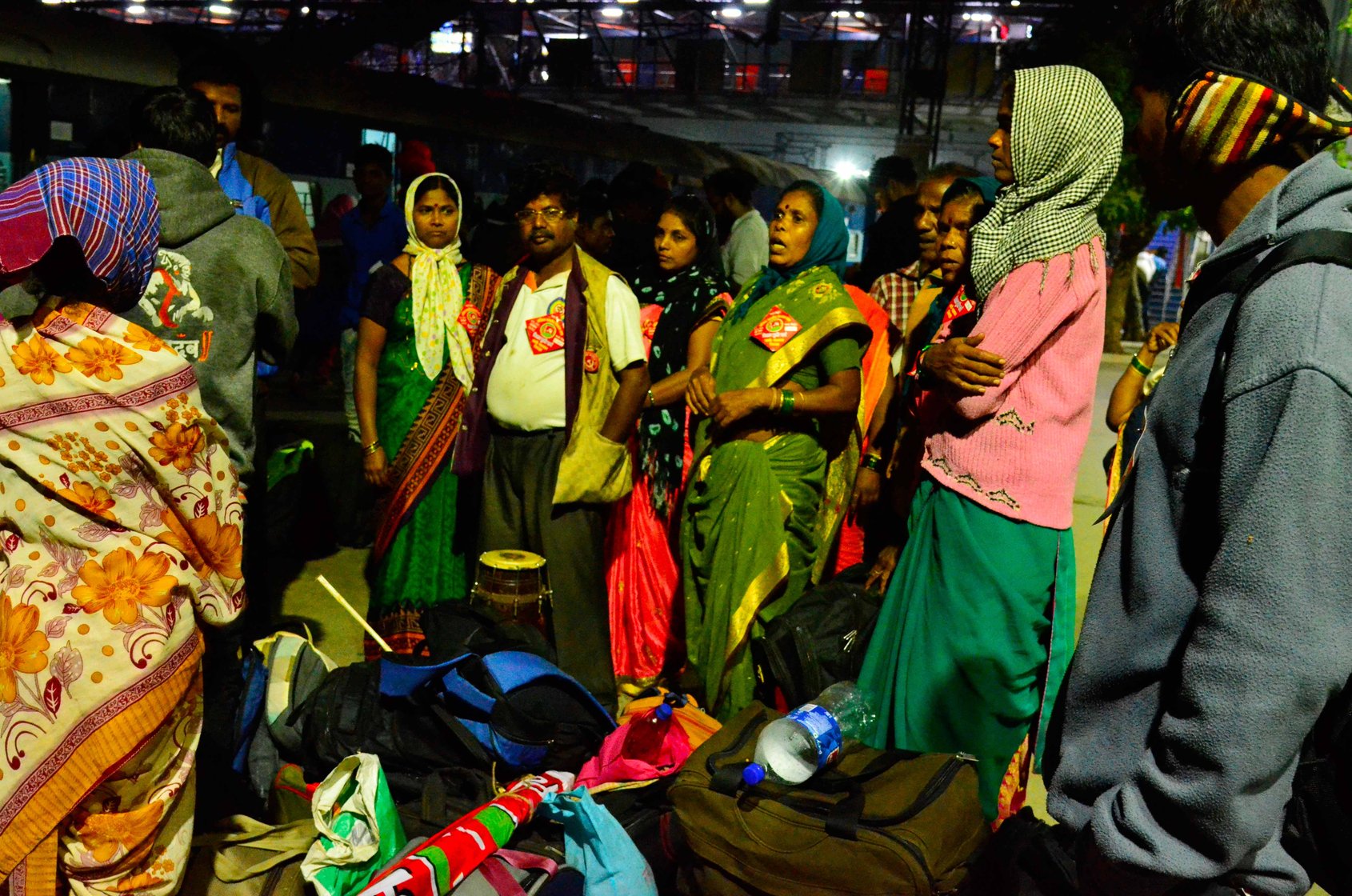 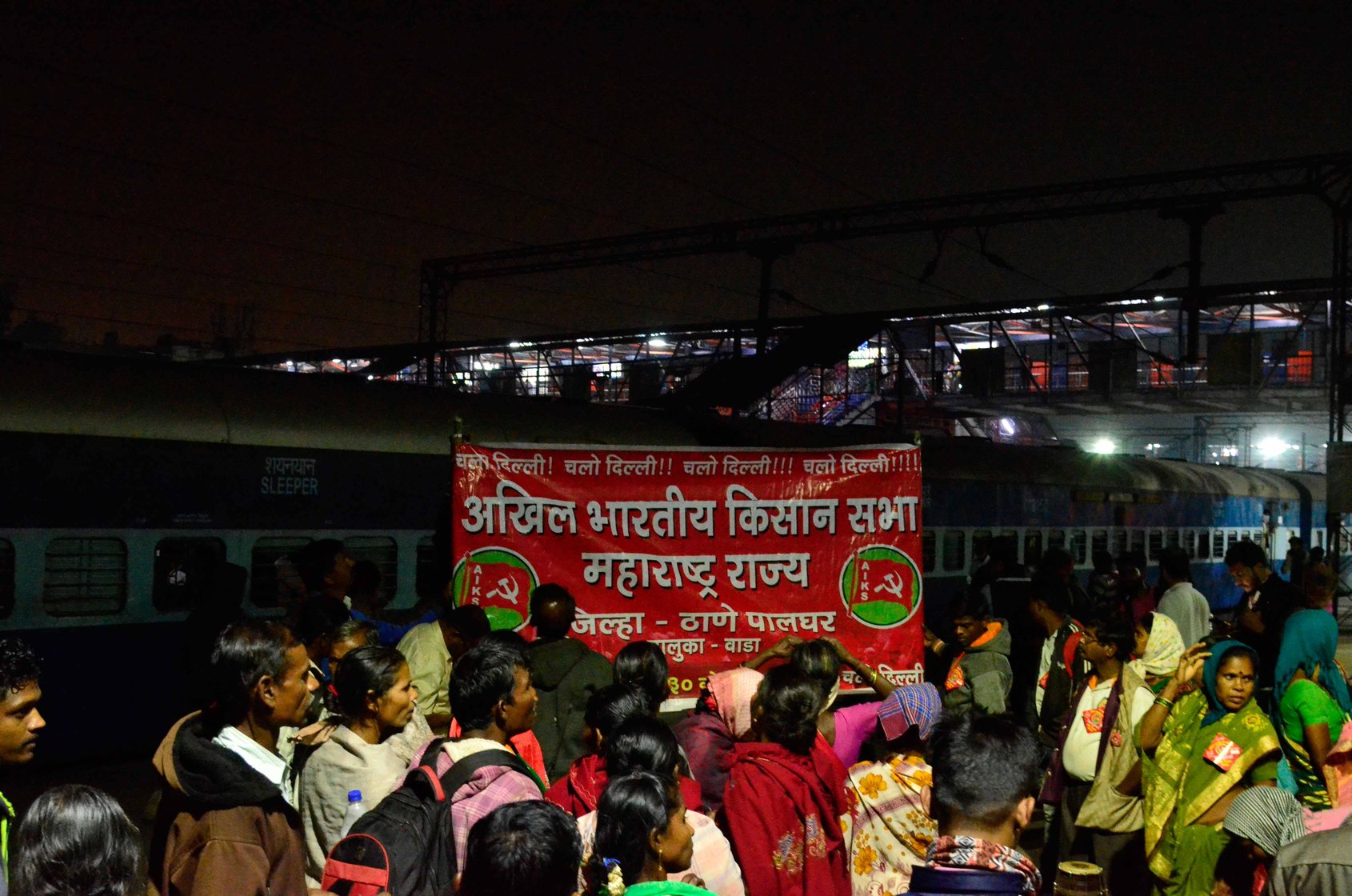 When large contingents travel together in trains, there is always a possibility of getting lost. The Kisan Sabha banner is displayed at Nizamuddin for everyone on the long 24-coach train to assemble at one place. 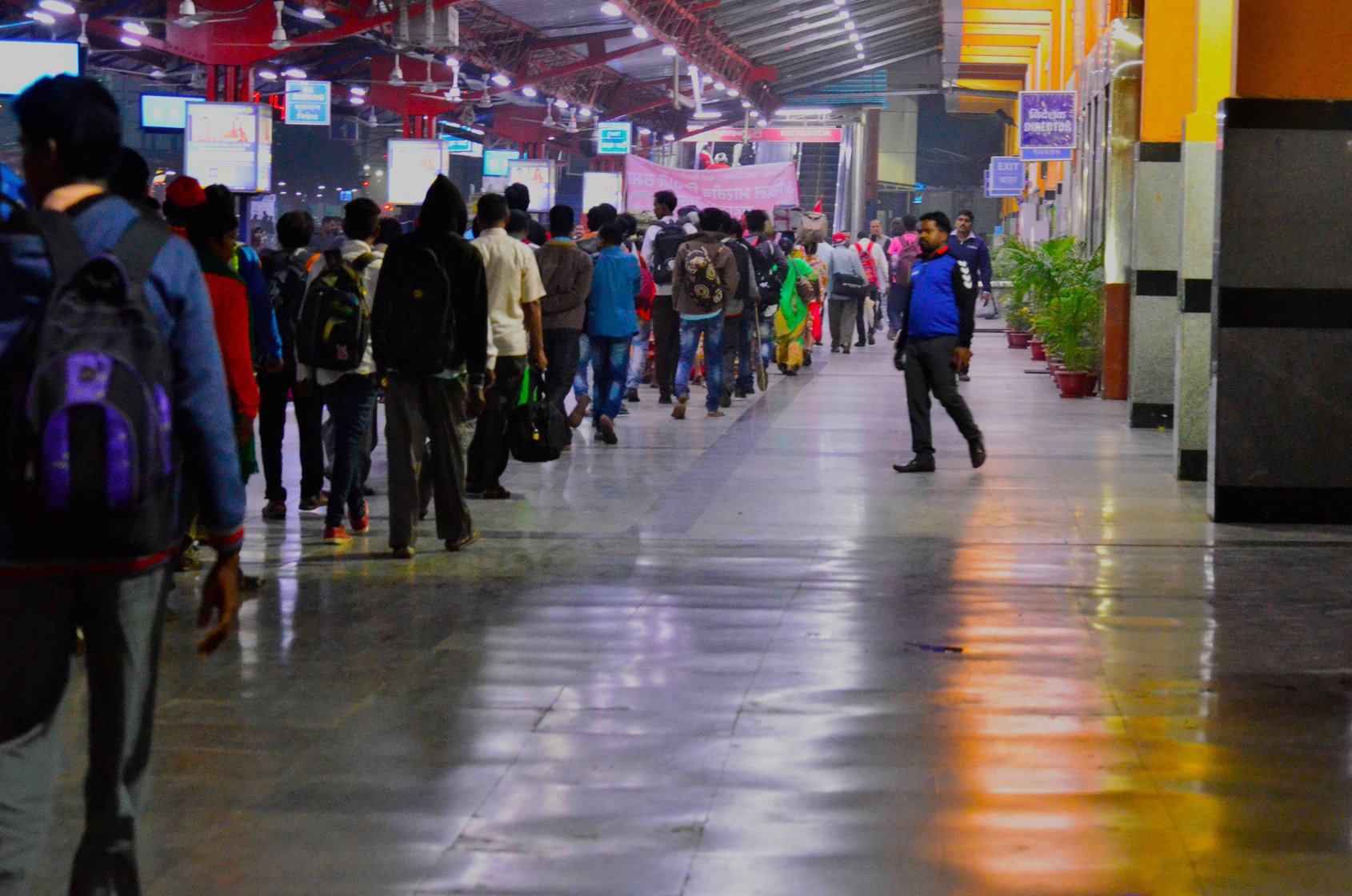 There are 100 people by now in the Palghar contingent. They will walk to the nearby Gurudwara Shri Bala Sahibji where Nation For Farmers volunteers have arranged accommodation and food at the Sikh langar . 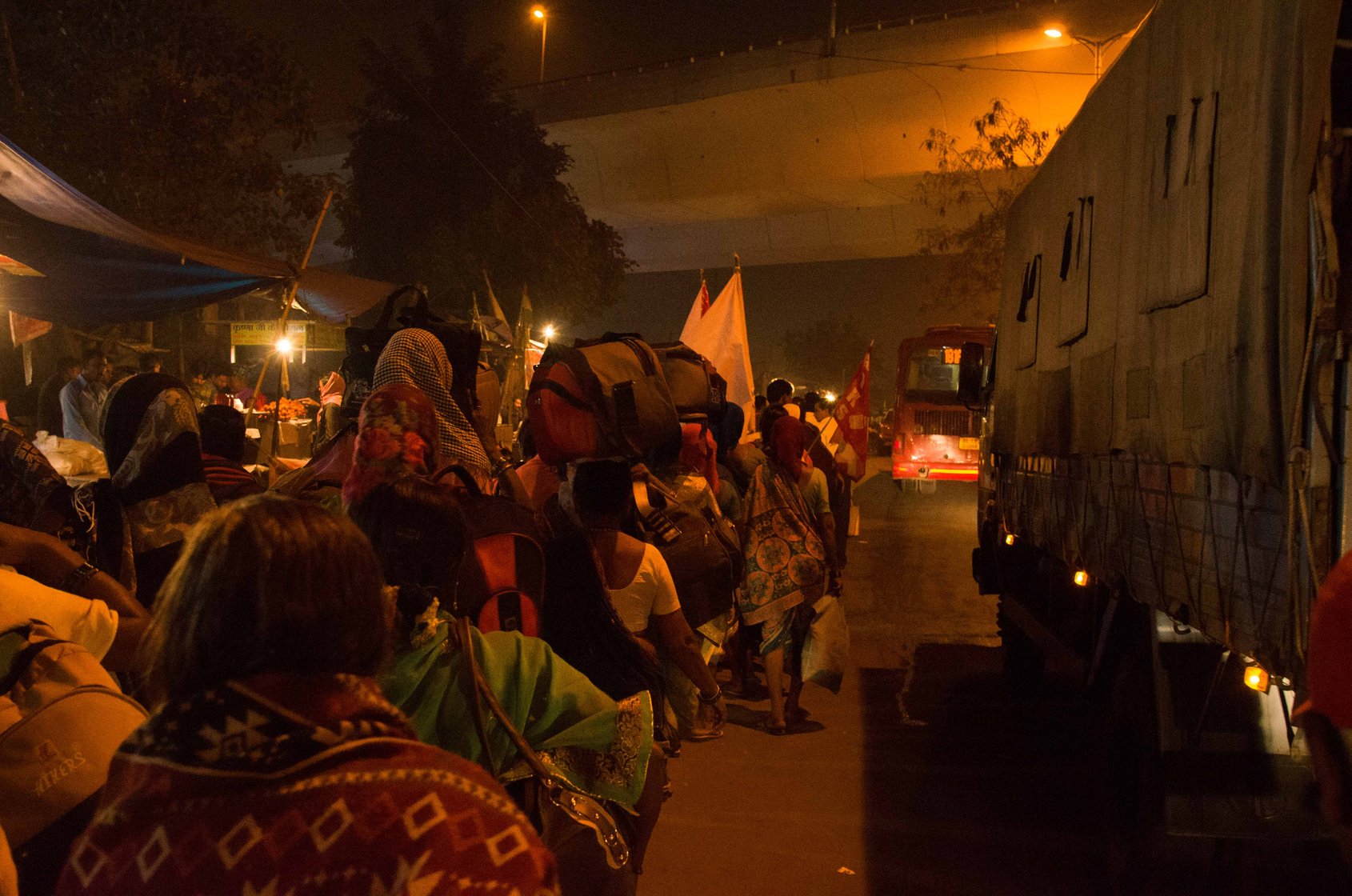 The 20-minute walk from Nizamuddin to the gurudwara takes the farmers through the heavy and unrelenting Delhi traffic. There will be occasions in the coming days for some delicious Delhi street food. 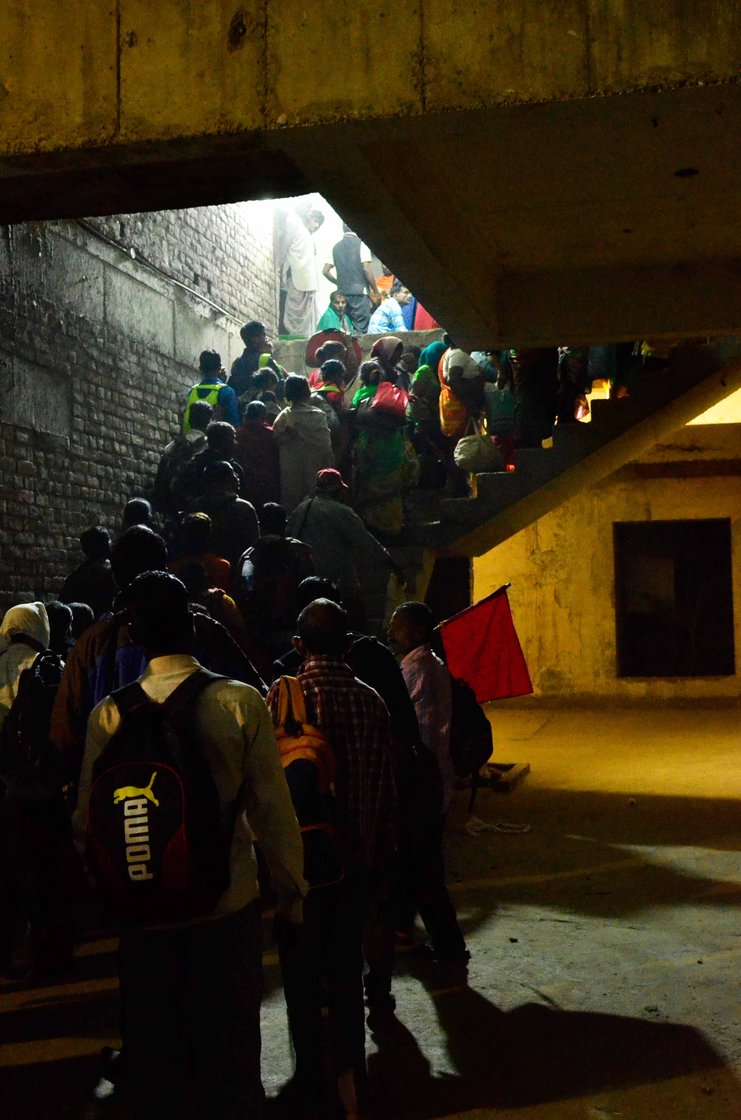 Volunteers of Nation For Farmers, an urban solidarity group, Kisan Sabha volunteers and the Gurudwara Shri Bala Sahibji administration, have helped ready this unfinished building with some carpets, electrical points, water and mobile toilets for their guests from Maharashtra, Karnataka, Andhra Pradesh, Telangana and other southern states. By the afternoon of November 29, a 5,000-plus strong southern contingent of the Dilli Chalo march will walk to Ramlila Maidan, nine kilometres to the north of the gurudwara . This is one of the five routes that farmers from across the country will be taking to reach the Maidan. On November 30, everyone will together march towards Parliament.