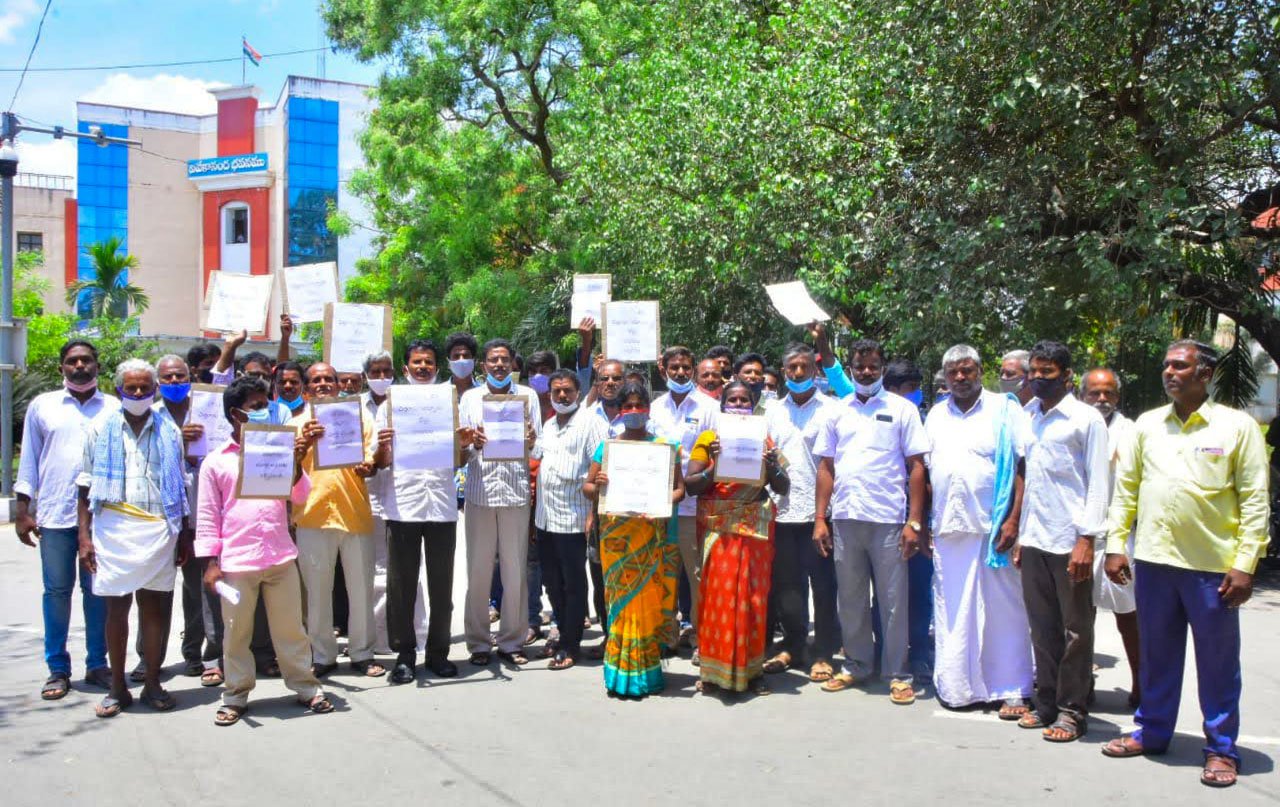 For nearly two years, sugarcane farmers in Andhra Pradesh's Chittoor and YSR districts have been waiting for sugar factories to pay them. Many have taken loans and gone into debt in the meanwhile

It was the sixth dharna that C. Venkata Subba Reddy was attending to demand the money owed to him. For more than 18 months, the farmer from YSR District in Andhra Pradesh hadn’t been paid for his sugarcane.

R. Babu Naidu, who was also at the dharna , has been waiting for his payment of Rs. 4.5 lakhs from the sugar mill. He grows sugarcane in Ganeshpuram village, in Chittoor’s Ramachandrapuram mandal , where he rents eight acres from a relative. He has left his own land fallow because the bore well had dried up, he says. “I paid Rs. 80,000 [in 2019-20] to cultivate the land, but I was charged less by my relative. The rent is usually Rs. 20,000 per acre.”

Out of the total of Rs. 8.5 lakhs that Babu Naidu was owed, Mayura Sugars had paid him only Rs. 4 lakhs. “The balance is pending. Farmers need money to run their farms.”

In Chittoor and YSR District (also known as Kadapa), sugarcane farmers are still waiting to be paid by Mayura Sugars. “We wanted to intensify our protest but we couldn’t do that,” says Subba Reddy adding that the Covid-19 lockdown in March 2020 had prevented them from organising more protests last year. 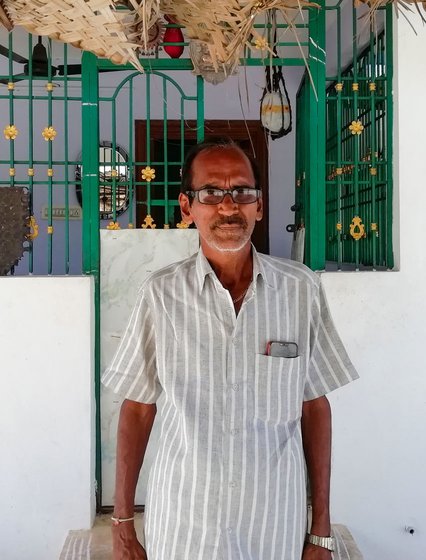 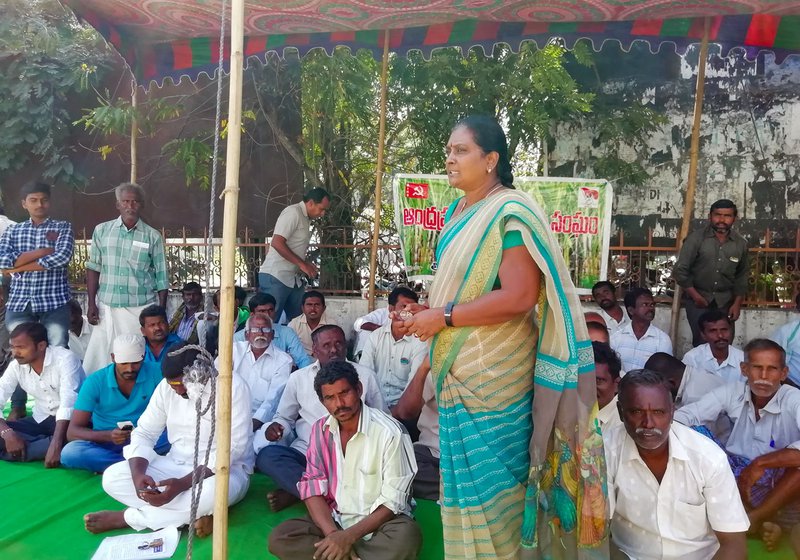 Left: A. Rambabu Naidu grows sugarcane in his 15 acres of land in Chittoor district. Right: Farm leader P. Hemalatha speaking at a dharna in Tirupati

The farmers should have received their dues within 14 days of supplying the sugarcane to the factory. The Sugarcane (Control) Order of 1966 mandates that if a mill fails to pay farmers within 14 days, it must pay them with interest later. And if that too does not happen, the cane commissioner can auction the properties of the factory under the Andhra Pradesh Revenue Recovery Act, 1864.

But Mayura Sugar Factory, located in Chittoor’s Buchinaidu Kandriga mandal , suffered a lockout in 2018 and shut its operations in February 2019. Even though the factory’s management paid farmers in tranches until August 2019, the company owed them Rs. 36 crores.

So to recover the dues, the state government attached 160 acres of the factory’s land, which is worth Rs. 50 crores, says John Victor, assistant cane commissioner of Chittoor district. Seven notices were sent to Mayura Sugars before its properties were put up for auction on November 4, 2020. But only one bid was received, which was too low, adds Victor. Mayura then submitted a banker’s cheque to the cane commissioner. “The management of Mayura Sugars gave me a cheque dated December 31, 2020,” Victor says. “But it bounced when we deposited it.”

The cheque was for Rs. 10 crores. “But Mayura Sugars owes the farmers Rs. 36 crores,” says P. Hemalatha, a committee member of All India Sugarcane Farmers’ Federation. “We were told that the company’s management would pay the dues by January 18 [2021] after selling the company’s assets, but the farmers haven’t received any money.”

Mayura is not the only sugar mill in Chittoor to have kept farmers waiting for their money. In Nindra mandal , the factory owned by Natems Sugar Private Limited hasn’t paid farmers for the cane it procured in 2019-20.

According to Dasari Janardhan, secretary of Natems Sugar Factory Farmers Association, the Natems management had assured farmers that they would be paid. “But the lockdown [in 2020] gave us a jolt. They said that the dues could not be paid because the managing director was stuck in London.” 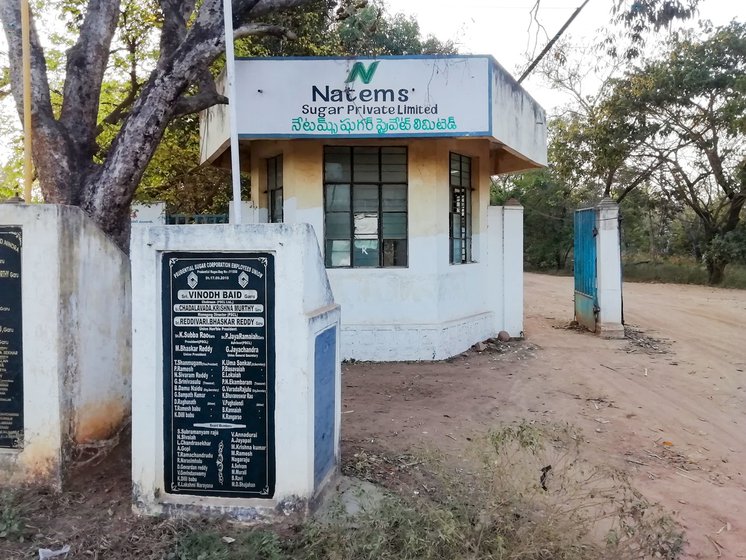 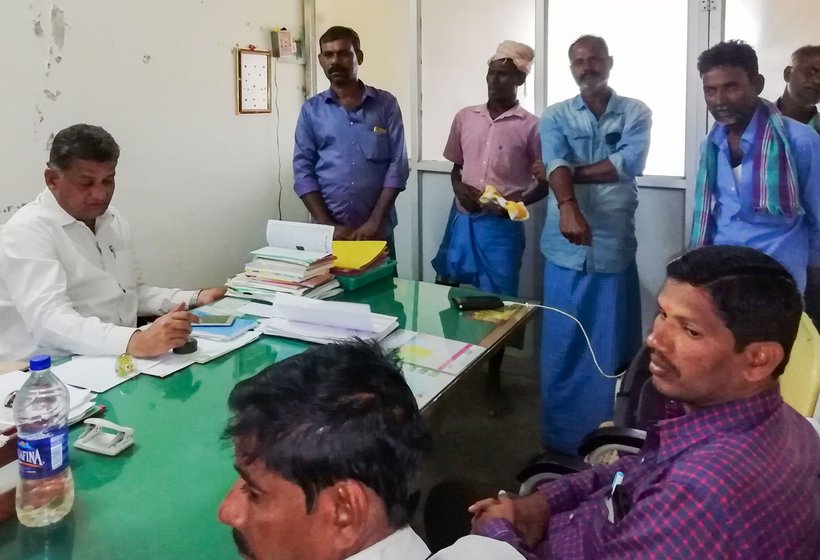 As of September 2020, Natems owed the farmers Rs. 37.67 crores, says Victor. The factory’s machinery was to be auctioned on September 19, 2020. “But the company got an interim stay order from the High Court.”

Natems cleared some of the dues by January 2021. “We owe Rs. 32 crore to farmers as of now,” said the company’s director R. Nanda Kumar that month. “I am arranging the funds. We will pay farmers by the end of the month [January] and start crushing cane. I am gathering the resources to save the company.” But the farmers didn’t receive anything.

The condition of sugar factories in Andhra Pradesh is not good, says Nanda Kumar. He is also president of the AP chapter of Indian Sugar Mills Association (ISMA). “From 27 sugar factories once, we have just seven working in the state.”

Farm leaders say that faulty policies are at the root of the issue. The mismatch between the retail price of sugar and the Fair and Remunerative Price for sugarcane is one of the main problems.

In a presentation made to the Niti Aayog’s task force on sugarcane and sugar Industry in 2019, ISMA noted that the cost of sugar production was higher than its selling price. “It costs Rs. 37-38 to produce a kilo of sugar. But it is being sold in Chennai for Rs. 32 and in Hyderabad for Rs. 31,” explains Nanda Kumar. “We lost Rs. 50 crores last year [2019-20] and Rs. 30 crores the year before.”

A. Rambabu Naidu, who grows only sugarcane in his 15 acres of land in Gurappa Naidu Kandriga village of Nindra mandal , feels that the industry should be allowed to decide the retail price of sugar. “Why can’t sugar be sold for Rs. 50 per kilo? Other industries get to decide the rate of their products then why can’t the sugar industry?” 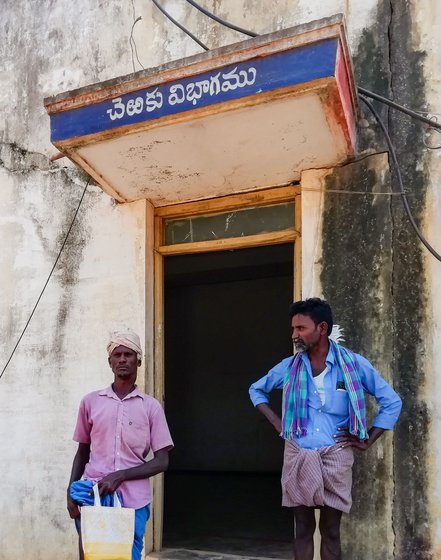 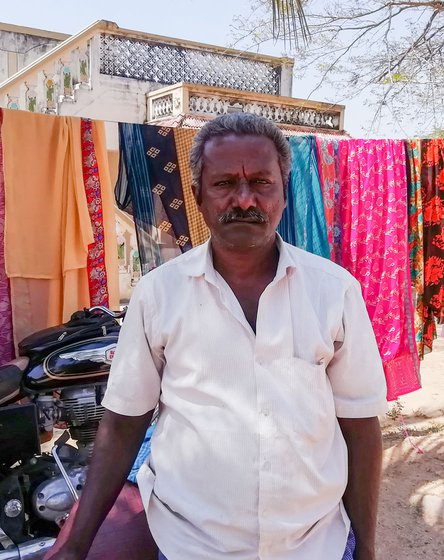 Left: K. Venkatesulu and K. Doravelu making the rounds of Natems to collect their payment. Right: V. Kannaiah, a tenant farmer, could not repay a loan because the factory had not paid the full amount that was his due

The sugar industry is also strapped for cash. “Finance from the scheduled banks has become non-existent,” Nanda Kumar says. “Credit is not available even for working capital.”

Little institutional credit is available to farmers, who have had to take personal loans for their requirements. “We had to buy fertilizers on loan for our other crops,” says Janardhan, who also borrowed money to pay the farm workers. “The sugar factory normally pays labour charges to the farmers so that they can pay the workers. But I had to borrow Rs. 50,000 to pay them. I am paying interest on that money now.”

Low sugar prices benefit companies producing packaged food and beverages, says Mangati Gopal Reddy, the state president of Federation of Farmers Associations. “The prices serve the interest of the large companies.” Companies producing soft drinks and confectionery have grown in the last three decades in the country and changed the pattern of sugar consumption. These bulk consumers use 65 per cent of the sugar produced, states ISMA’s report to the taskforce.

According to Nanda Kumar India generates surplus sugar. “It has to be reduced. Some of it is being exported and some is being diverted to produce ethanol now. The market will stabilise if this trend continues.”

The industrialist is banking on the union government’s Ethanol Blended Petrol programme, through which private sugar mills can supply molasses – a byproduct of sugar production – to the public-sector oil marketing companies. “Diverting sugarcane for ethanol production will reduce the glut in the market,” says Nanda Kumar.

In October 2020, with a view to improve the sugar industry’s ability to pay farmers, the union government fixed a higher price for the ethanol derived from sugarcane-based raw materials,

But farm leader Janardhan remains unconvinced. “The diversion of money by sugar factory managements for other purposes is making matters worse,” he says. 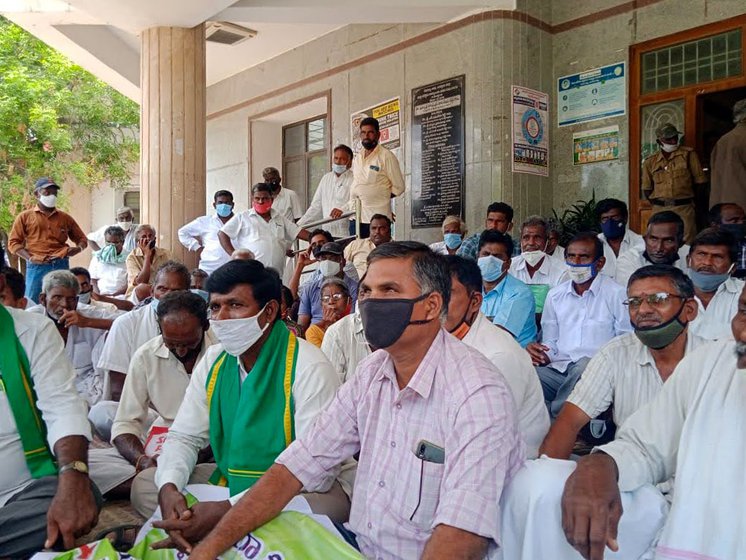 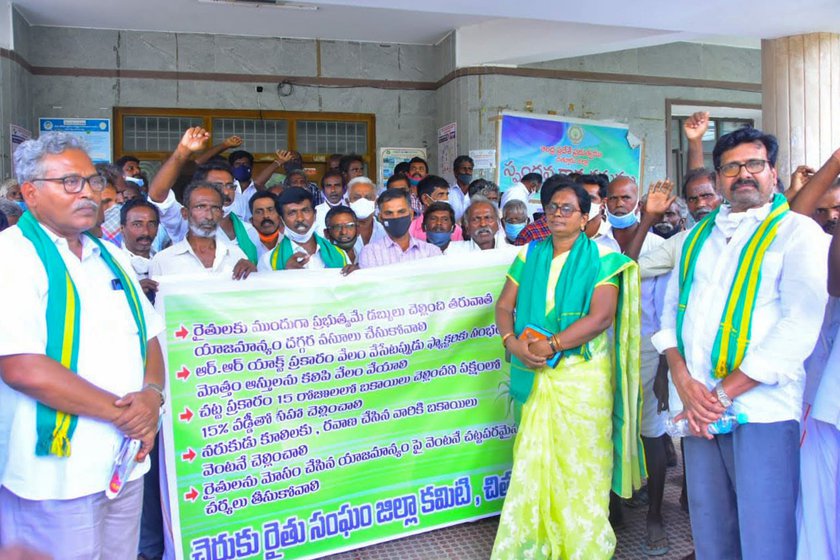 Sugarcane farmers protesting in Chittoor in April 2021, seeking the arrears of payments from Mayura Sugars

Natems’ investment of Rs. 500 crore for a cogeneration plant is a source of concern for the company too. The surplus power generated by the sugar factory was to have been sent to the electricity grid. “We have an installed capacity of 7.5 MW in the factory, but we are not supplying power because the [state] government is not willing to purchase power at our rates and the rates in the power exchange are down to Rs. 2.50 to Rs. 3 per unit,” says the company's director, adding that the rates were below the production cost.

Cogeneration plants of many sugar mills have become non-performing assets, explains Nanda Kumar. “Having invested in it, we don’t have an alternative. We scaled down our plan of setting up a 20 MW plant because of government policy. We have to survive until the policy changes and the situation improves.”

But the situation has had far-reaching consequences in Chittoor – AP’s second-largest sugarcane producing district. The district administration’s records show that cultivation in Chitoor’s 66 mandals has reduced by nearly half in eight years – about 28,400 hectares of land in the district was under sugarcane cultivation in 2011, and by 2019 sugarcane was grown in only 14,500 hectares.

With the delays in receiving their payments, sugarcane farmers – who must sell their crop to only the mill assigned to them – have been trying out other crops, but without much success. The cost of cultivating the crop has made it non-remunerative for farmers, says Subba Reddy.

For Babu Naidu, it has meant seeking help from his extended family. “My relatives had to pitch in and help my daughter get admitted to an engineering college in Chennai,” he says. “If I had got my dues I wouldn’t have needed their help.”

Subba Reddy feels farmers have little choice in how the sugar factories treat them. He says, “But our children are being sent back home due to non-payment of fees. In these circumstances, won't farmers think of suicide?”