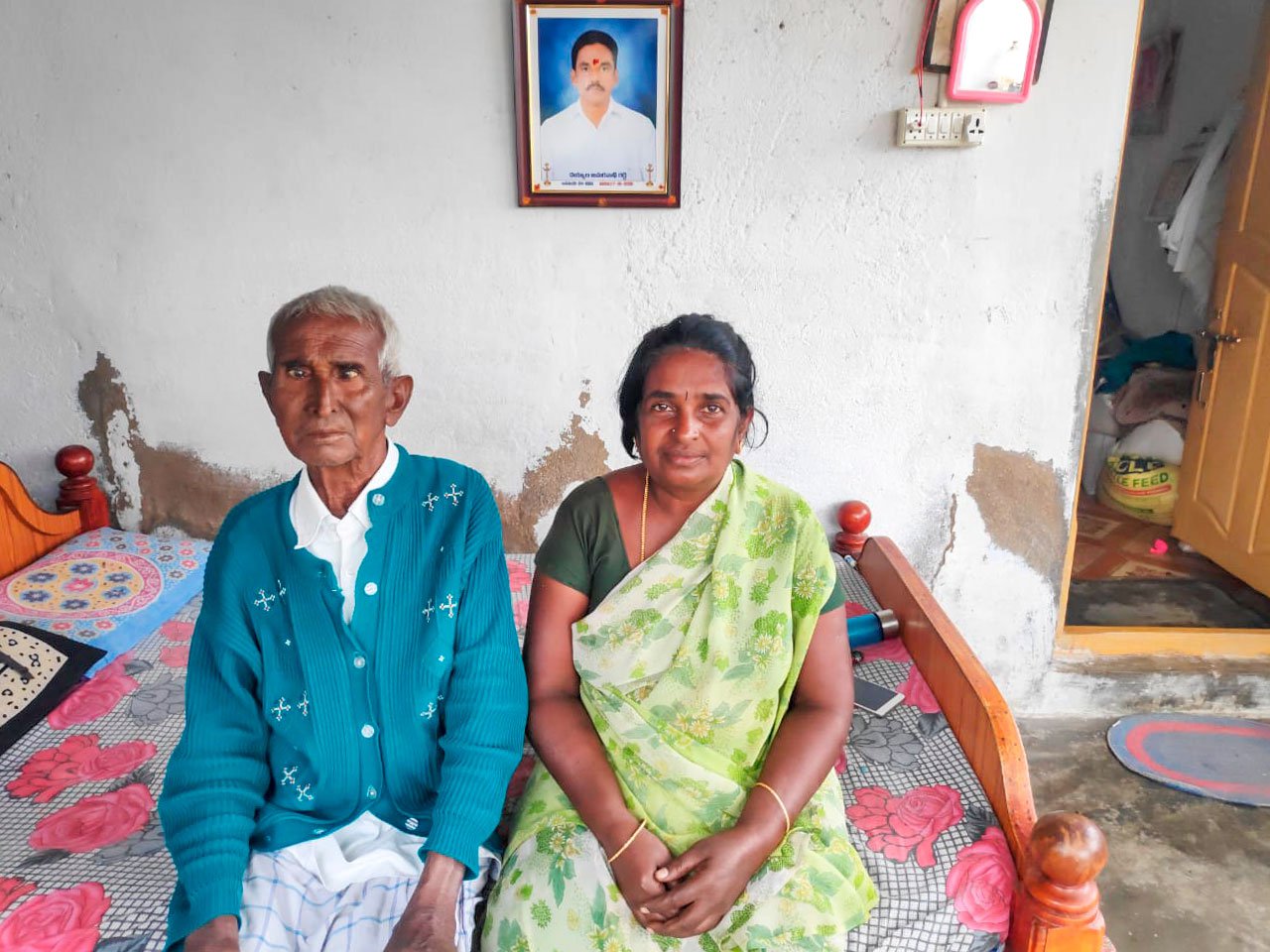 Drought, fluctuating prices and excess rainfall have been dealing a harsh blow to tomato growers in Andhra's Rayalseema region. The pandemic made it worse for farmers like Amarnath Reddy and Chinna Reddappa

When his third borewell also ran dry,  D. Amarnath Reddy had to fall back on rains to irrigate his land. But rainfall had been unpredictable in Andhra Pradesh's drought-prone Rayalseema region where the 51-year-old farmer cultivated tomatoes. So, he spent Rs. 5 lakhs on borewells for his three-acre farm in Chittoor district's Mudivedu village. He borrowed from private lenders to finance the drilling. After the first well failed, he tried again. By the third time, his debt had grown but water remained elusive.

Amarnath anxiously waited to harvest his crop in April-May 2020, and pay back some of his loans. He was in debt of Rs. 10 lakhs – from his expenditure on the borewells, a loan for his elder daughter’s wedding and also a crop loan. But the sudden lockdown announced by the prime minister on March 24 last year thwarted his plans. Not able to pluck and sell his  tomatoes, he watched them ripen and rot away.

“He must have felt that things would not get better during the pandemic, and lost all hope,” says Amarnath’s wife, D. Vimala, trying to explain why he consumed poison on September 17, 2020. “He tried to take his life 10 days before that, too. We took him to a big hospital in Bengaluru [180 kilometres away] to save him. We spent Rs. 1 lakh then,” says Vimala, who had pleaded with Amarnath not to do it again.

Borewell failure is one of the top reasons noted in the police reports of farmers' suicides in Chittoor. The others are failure of tomato crop and agricultural debt. An order from the state government on compensation to the families provides more reasons: “The reasons for committing such suicides may be due to various reasons like failure of borewells, raising of commercial crops with high cost of cultivation, non-remunerative prices, oral tenancy and ineligibility to avail bank loans, private lending with higher interest rates, adverse seasonal conditions, heavy expenditure incurred towards children education, ill health and marriages.”

For many, the situation was exacerbated by the unplanned lockdown last year. In 2020 alone, 34 farmers in Chittoor district took their lives – the highest number since 2014. Of them, 27 died between April and December. 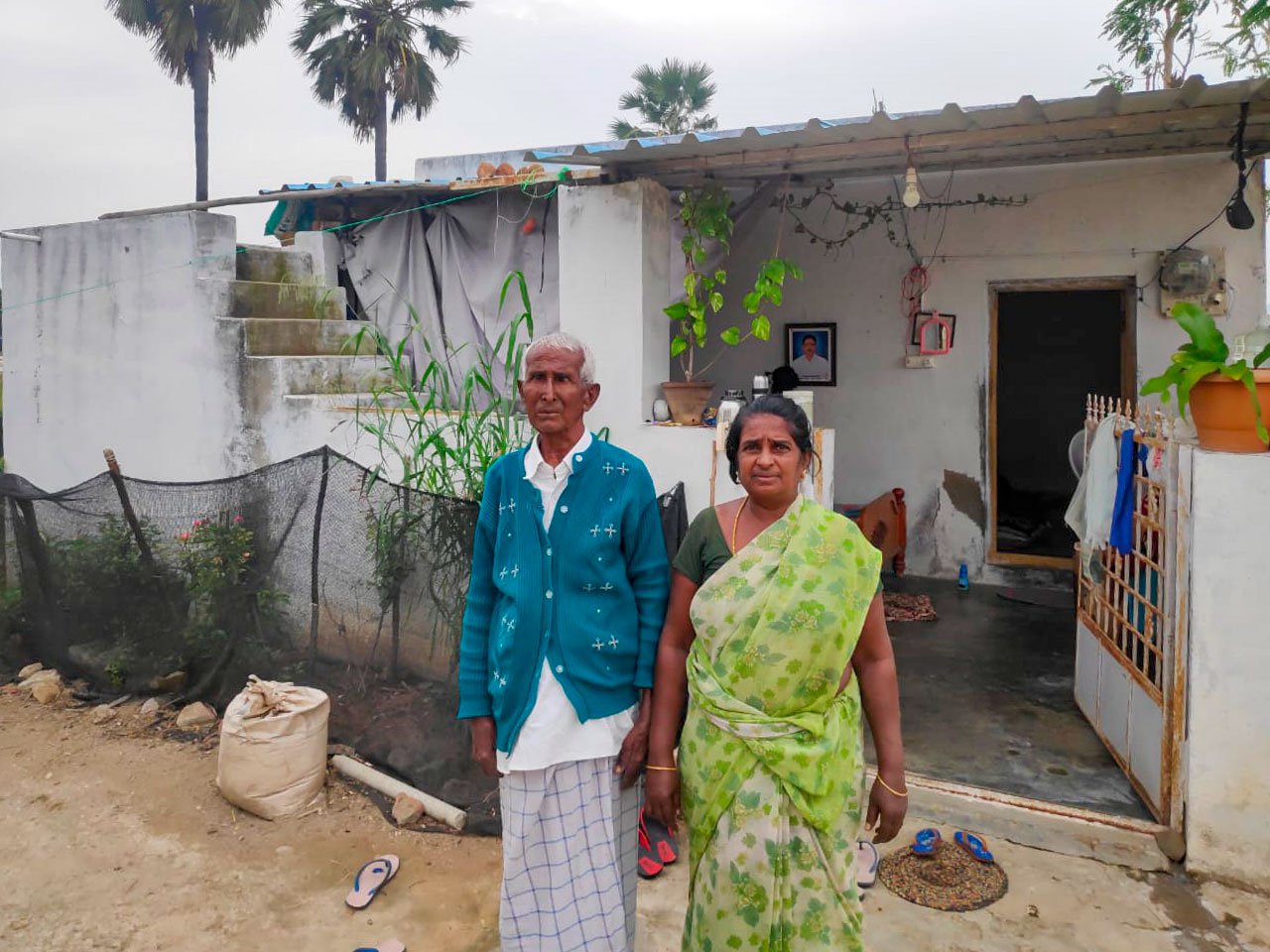 D. Vimala (right) and her father, B. Venkata Reddy, in Mudivedu, Chittoor. Vimala's husband, D. Amarnath Reddy, could not harvest his tomato crop because of the Covid-19 lockdown

The situation was not much better before the pandemic. In 2019, the average household debt of farmers in Andhra Pradesh – Rs. 2.45 lakhs – was the highest in the country. The recently released Situation Assessment of Agricultural Households and Land and Livestock Holdings of Households in Rural India, 2019 notes that 93 per cent of agricultural households in the state were in debt that year.

On the street next to Amarnath and Vimala’s, P. Manjula, 27, has been trying to make sense of her late husband’s mental state. He showed no signs of distress, she says. In the eight years they were married, he would often discuss his plan for cultivating their 10-acre farmland. “But he never mentioned the extent of his financial troubles. The debt [Rs. 8.35 lakhs] was a surprise to me.” Her husband, 33-year-old P. Madhusudhan Reddy, hanged himself from a tree and died on July 26, 2020.

The tomatoes that Madhusudhan had cultivated on half an acre of land remained unplucked. Most of the debt came from expenses on four borewells installed in their farmland, says his father, P. Jayarami Reddy. The 700-800 feet boreholes had been dug over a period of eight years and interest had accrued on the borrowed amounts.

To pay back some of the loans, Madhusudhan's family sold two acres of the land after his death. They are now cultivating paddy on half an acre, drawing water from a borewell jointly used by seven families in the area. “The groundnuts we sowed did not give good yield because of heavy rains this year [2021] . We won’t get back our investment. The remaining land is fallow,” says Jayarami Reddy.

Farmers in the district are switching from tomato to paddy because of excess rains since 2019, says B. Sreenivasulu, the deputy director of horticulture in Chittoor. However, for seven years in the decade between 2009-10 and 2018-19, parts of the district – like Kurabalakota mandal where Mudivedu is located – were declared drought-hit, says N. Raghava Reddy, the mandal 's assistant statistical officer. 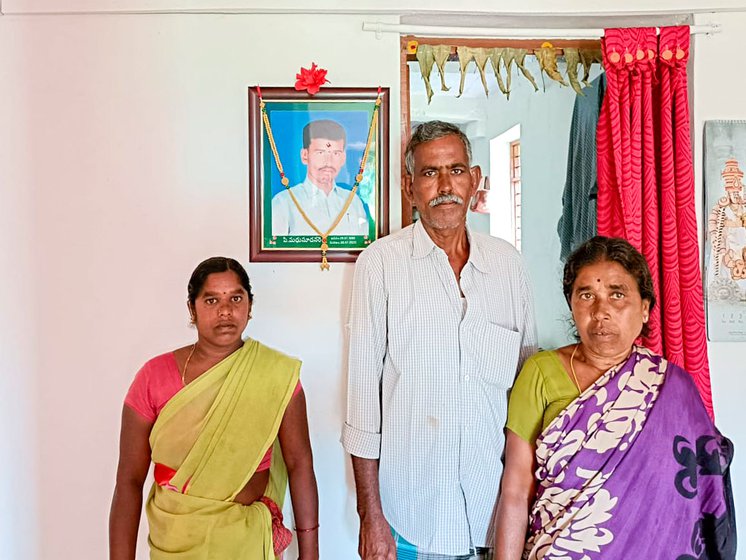 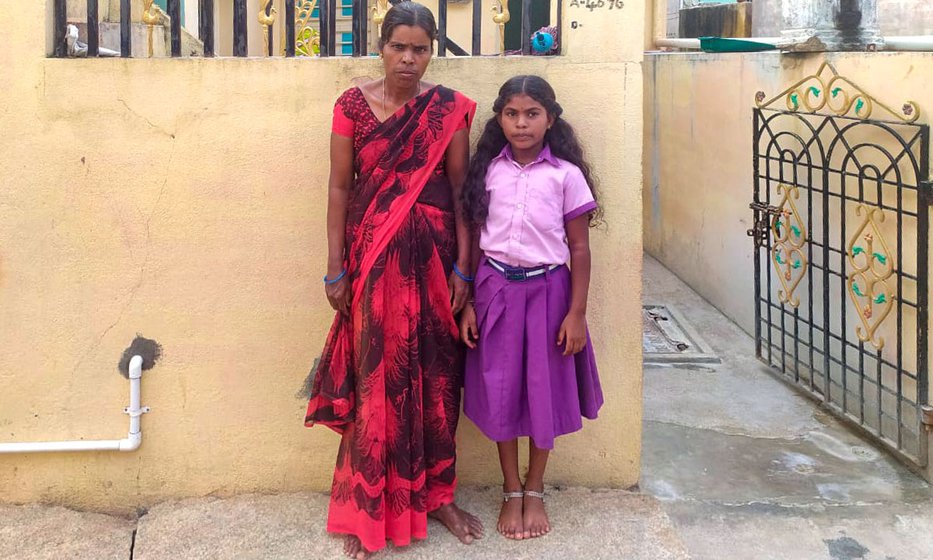 Farmers' deaths by suicide have shot up in Chittoor since 2019. According to data compiled by the District Crime Records Bureau, the number was 7 in 2018, but it went up to 27 in 2019. In 2020, when Andhra Pradesh recorded the third highest number of farmer suicides in the country – 564 including 140 tenant farmers, according to National Crime Records Bureau (NCRB) – 34 were from Chittoor.

A Dalit tenant farmer, M. Chinna Reddappa, was one of them. He had cultivated tomatoes on 1.5 acres of leased land in his village, Sampathikota, in Pedda Thippasamudram mandal , which he rented for six months at Rs. 20,000. The Covid-19 lockdown, says his wife, M. Eswaramma, did not give him the chance to sell. “We were left with a debt of three lakh rupees after the crop just wilted in the fields.” The couple had neither property nor savings to see them through the loss of income. On December 30, 45-year-old Chinna Reddappa ended his life.

Eswaramma and her daughter, Pooja, a student of Class 5, shifted to her parents' home in Deganipalli hamlet in B. Kothakota mandal. “Now I survive by doing labour on farms for 200 a day, and have no means to repay the debt,” says Eswaramma, adding, “Creditors keep calling me and troubling me even though I am barely surviving.”

A Right to Information application in February 2019 by Rythu Swarajya Vedika (RSV) brought to light that between 2014 and 2018,  1,513 farmers had died by suicide in Andhra Pradesh. But only 391 families had received the state government’s compensation of Rs. 5 lakhs. The state government ordered an enquiry after this was reported in the media . “The government agreed to pay compensation to only 640 more, and the remaining 482 farmers' families did not receive anything,” says B. Kondal Reddy, secretary of RSV, a farmers' organisation which helps families that are denied compensation. The state government, in October 2019, announced an increase of Rs. 2 lakhs to the compensation for families of deceased farmers. But neither Vimala, Manjula nor Eswaramma have received any of it yet.

In 2019-20, Chittoor district contributed 37 per cent to state's share of tomato production – Andhra Pradesh was the second largest producer in the country that year. Both hybrid and local varieties are cultivated throughout the year. Many tomato growers in Chittoor and other districts in Rayalseema (YSR Kadapa, Anantapur, Kurnool), and also from neighbouring Karnataka, sell their produce at the Madanapalle tomato market in Chittoor, one of the largest market yards in the country. 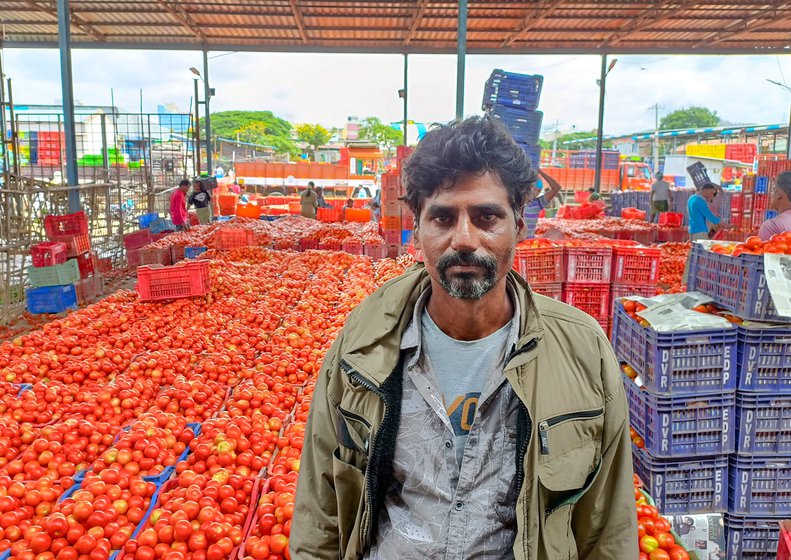 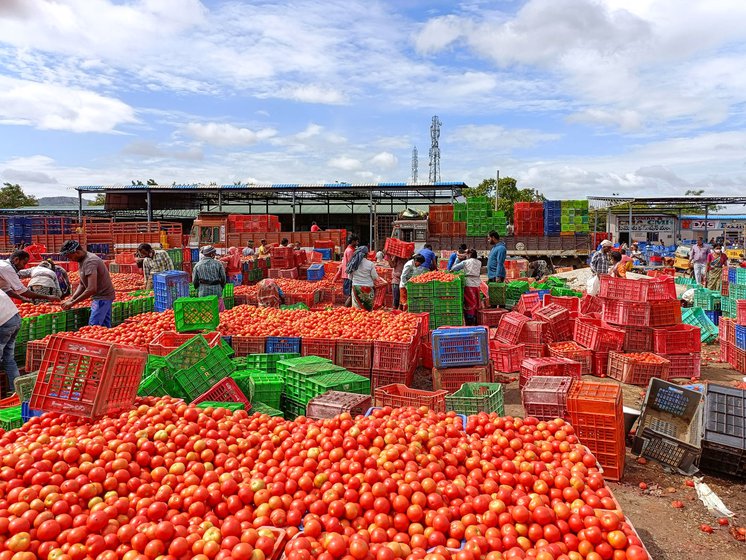 S. Sreenivasulu from Anantapur (left) sells his produce at Madanapalle market yard in Chittoor. The market yard is one of the largest trading hubs for tomatoes

At Madanapalle, wholesale prices are decided by auction, and the rate depends on several factors. For example, a spell of rain the night before will bring down the price the next morning. When prices are good, more arrivals of produce at the market can cause the auctioned rate to drop that day. This happened on August 29, when this reporter met S. Sreenivasulu, a farmer from Malreddipalle village in Anantapur district’s Tanakal mandal , who was selling at the Madanapalle yard. “The rate for a 30 kilo crate came down to Rs. 390 from Rs. 500 yesterday after farmers brought more tomatoes to the yard due to the good price,” he said.

“Investment per acre of tomato can vary from Rs, 100,000 to Rs, 200,000," says R. Ramaswamy Reddy, a farmer from Allugundu village in Nallacheruvu manda l of Anantapur. "The yield could be higher with more inputs, and if nature [rains] didn’t damage the crop,” he adds. Losses accrued over 2-3 years can only be recovered in the fourth year.

Tomatoes have become riskier to cultivate in the last three years, says N. Sahadeva Naidu, a lawyer from Madanapalle whose family cultivates the crop on 10-15 acres of leased land. “Rates have not remained the same for even a week in my 20-year experience," he says, adding that input costs have increased 7-10 times in the last two decades, but the rate of tomato has hovered in the range of Re. 1 to Rs. 60. However, the potential of high returns on the crop attracts cultivators who can take the risk. Producing more has helped Naidu's family deal with the fluctuating prices. “We cultivated the crop by leasing land and sold the tomatoes throughout the year, and so were able to shield ourselves against losses,” he explains.

This year, heavy monsoon rain in September and October, and unseasonal rainfall in excess of 255 per cent since mid-November, have damaged thousands of acres of crops across Rayalseema. The reduced supply of tomatoes have been driving up prices  in Madanapalle since October. The higher quality hybrid tomato, which was selling at Rs. 42-Rs. 48 per kilo last month, sold at Rs. 92 a kilo on November 16. And the price kept climbing, until it hit a record high on November 23 – Rs. 130 per kilo.

Though some farmers went home relieved that day, for many it was yet another reminder of their precarious livelihood.


If you are suicidal or know some in distress please call Kiran, the national helpline, on 1800-599-0019 (24/7 toll free), or any of these helplines near you. For information on mental health professionals and services to reach out, please visit SPIF’s mental health directory .
#lockdown #Covid-19 #Madanapalle-market #November-floods #Rayalseema #tomato-farmers #borewells #farm-debts
G. Ram Mohan
@mnirm