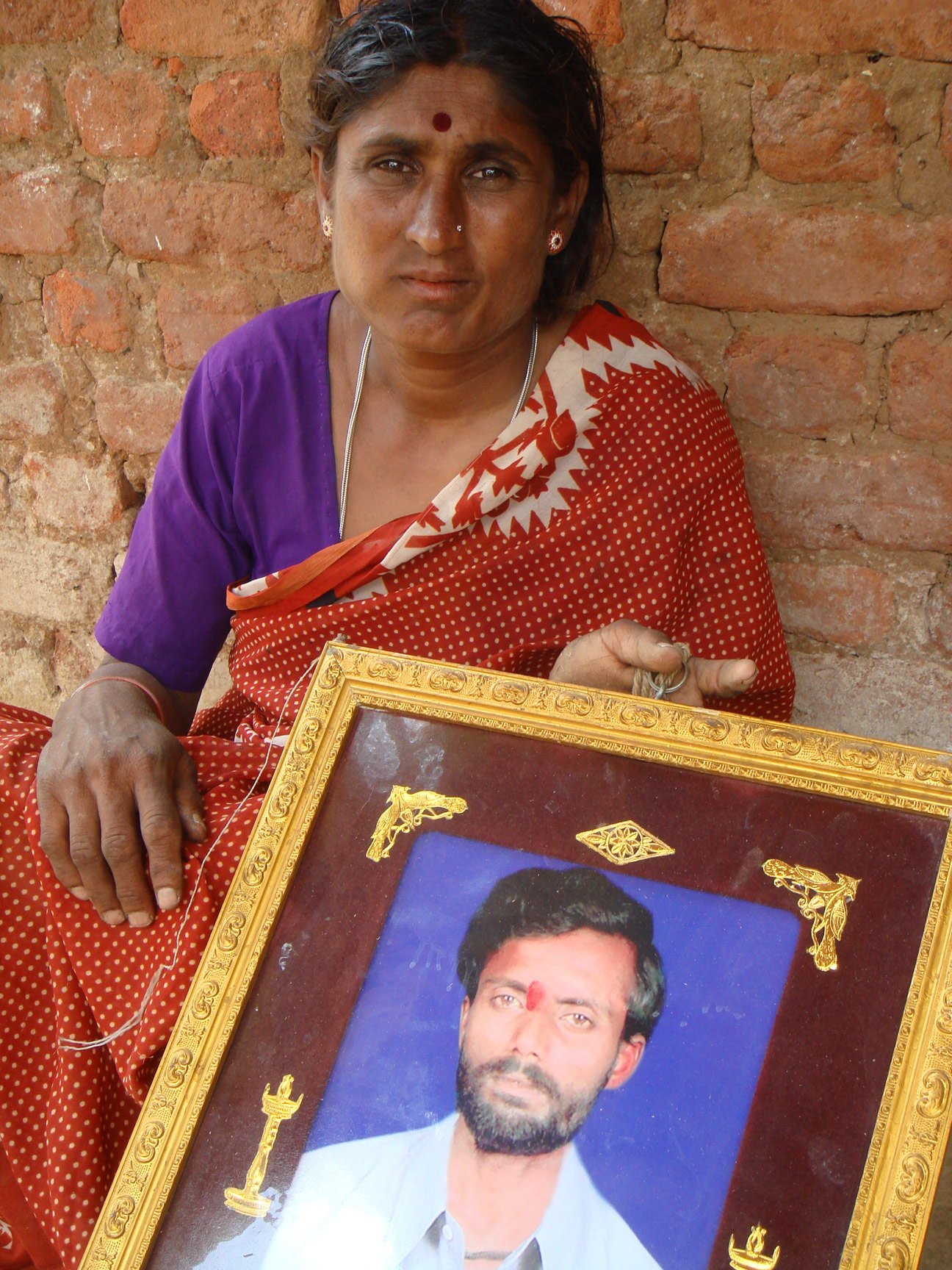 Farmer's diet worse than a convict's

Several women in Karnataka's Mandya district like Jayalakshmamma, whose husband committed suicide four years ago, still stand up to the unending pressure with incredible resilience

When Jayalakshmamma finishes her 12 hours of labour on those days she can find work  she's entitled to less than a fourth of the rice given to a convict in prison. In fact, the rice she gets on average for a whole day is far less than what the incarcerated offender gets in a single meal.

Jayalakshmamma is not a convict in prison. She's a marginal farmer whose husband H.M. Krishna, 45, killed himself in Huluganahalli village of Mandya district four years ago. This district was among the worst affected by the farm suicides of 2003 in Karnataka. In this State, her BPL (below the poverty line) card entitles her to only four kg of rice (and a kg of wheat) a month. True, those four kg are subsidised by the State. But she cannot afford to buy a lot more than that at prevailing market price. She is also one of over a lakh of women across India who have lost their husbands in suicides arising from the farm crisis these past 14 years.

"Four kilograms a month means about 135 grams a day," says T. Yashavantha, who is from a farming family of the same district. He is also State vice-president of the Students Federation of India. "Even an undertrial or convict gets more." What's more, they get cooked rice. She gets four kg of grain. Jail diets in the State vary according to whether the prisoner is on a "rice diet," a "ragi diet" or a "chapati diet." Jail officials in Bangalore told The Hindu "those on rice diets and doing rigorous imprisonment get 710 grams of cooked rice per meal. Those on non-rice diets get 290 grams of rice. Undertrials and those doing simple imprisonment [who are on rice diets] get 505 grams of rice per meal."

The convict doing rigorous imprisonment does eight hours of labour. Jayalakshmamma does 12 or more. "But her entitlement is 45 grams per meal if she has three a day," points out Mr. Yashavantha. She doesn't have the time, though, to make comparisons. Her daughter now works at breadline wages in a Bangalore garment company. "At most she can send us Rs.500 in a year," she told us at her village. This leaves her son and herself at home. Their joint entitlement on the BPL card would yield 270 grams per day. That is: they would together still get less rice than even a prisoner on "ragi diet" gets 290 grams or more. 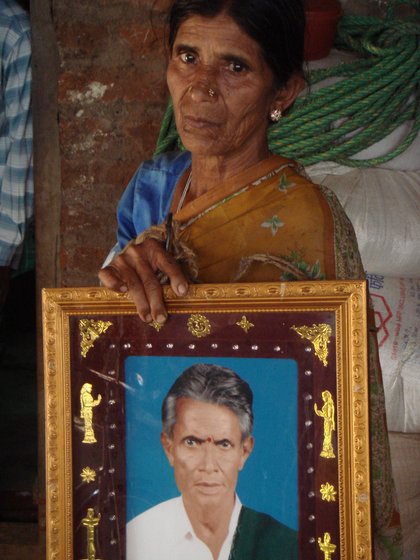 They own around 0.4 acres and had leased two acres before Krishna's suicide. "On the former we grew vegetables. On the latter, we had sericulture. Vegetable prices have been terrible. Once, we got Rs.1 a kilo for tomatoes. And water costs came to Rs.9,000 (or Rs.70 per hour) over six months." Now they have only the 0.4 acres. "We also sold all our livestock after his death." They have been paying off his loans and most of the compensation they received appears to have gone this way. "My boy Nandipa grazes the goats of others but there's no daily income from it." Instead, they will share the offspring of the animals if any with the owner. "I myself make Rs.35 a day working this off-season."

"I wanted Nandipa to study. But he was in despair. Three years ago, then aged 12, he ran off to Bangalore and worked in a hotel. There he was beaten by the owner. He ran away, took the wrong train and landed up in Mumbai. After a while, he was brought back."

"All widows have problems. But those bereaved by the farm crisis suffer worse," says Sunanda Jayaram, president of the women's wing of the Karnataka Rajya Ryuthu Sangha (Puttanaiah group) "Even after losing her husband she has to maintain his father and mother, her own children and the farm  with no economic security for herself. And she is saddled with his debts. Her husband took his own life. She will pay the price all her life."

In Bidarahosahalli village, Chikktayamma's state exemplifies this. Her husband, Hanumegowda, 38, killed himself in 2003. "The debts are all we're left with," she says, without self-pity. "What we earn won't pay off even the interest on loans to the money lenders." She's struggled to educate her three children  who might be forced to drop out though all want to study further. "The girls should study, too. But later, we'll have to raise lots of money for their marriages as well."

One girl, Sruthi, has done her SSLC exams and another, Bharathi, is in the second year of her pre-university course. Her son Hanumesh is in the 8th standard. Her husband's mother and a couple of other relatives also live in this house. Chikktayamma is the sole breadwinner for at least five people. "We have only 1.5 acres [on part of which she grows mangoes]. So I also work as a labourer when I can for Rs. 30 a day. I had a BPL card but they [the authorities] took it from me saying `we'll give you a new card.'" It never came back, says Mr. Yashavantha. "Instead, they gave her an APL [above the poverty line] one." 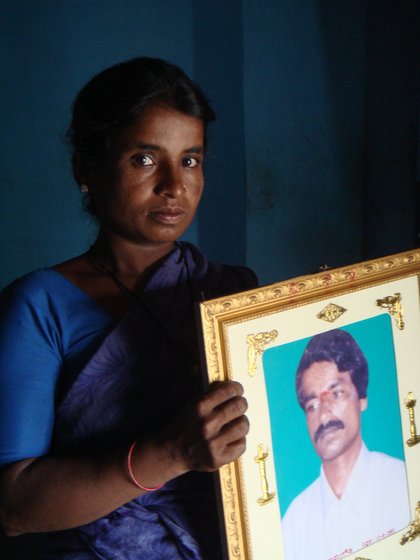 In Huligerepura, Chenamma and her family grapple with a debt of over Rs.2 lakh left by her husband Kadegowda, 60, who took his life four years ago. "Sugarcane just sank and it crushed him," says his son Sidhiraj. "We have only three acres," says Chenamma. "It's hard to generate a living from that now." But she and her sons still try. And the family plans to shift to paddy this year.

In Thoreshettahalli, Mr. Yashavantha's father, Thammanna, a farmer for decades, says the farm crisis is biting deep. "Most cane growers are not recovering the cost of production. Input costs go upwards, incomes downwards. Also, some 40 borewells were drilled in this village last month but only one succeeded. People are giving up. You will find farmland lying unused even during season."

What about self-help groups? Jayalakshmamma has paid an initial amount "but the group has not yet launched. And I cannot afford the Rs.25 a week. Nor the 24 per cent interest each year." Chikktayamma cannot think of making such payments regularly. "The SHG concept is a good one," says KRRS leader K.S. Puttannaiah. "But in some cases, they've also become moneylenders. Meanwhile, after the initial compensations, the State has no plan for widows and orphans of farm suicides. When have they even thought about it?"

"Remember, these and all other farm women are breadwinners and have always been so," says Ms. Jayaram. "Yet, they have no land rights and no land security. Even in agricultural labour, they are paid far less than men. Those widowed by the suicides are in constant tension. There are debts hanging on their heads which they did not incur. There are daughters whose marriages are pending. The pressure is unending." It is. But all the three women and many more like them in Mandya stand up to it with incredible resilience and still try to run their farms and feed their families with dignity and respect.