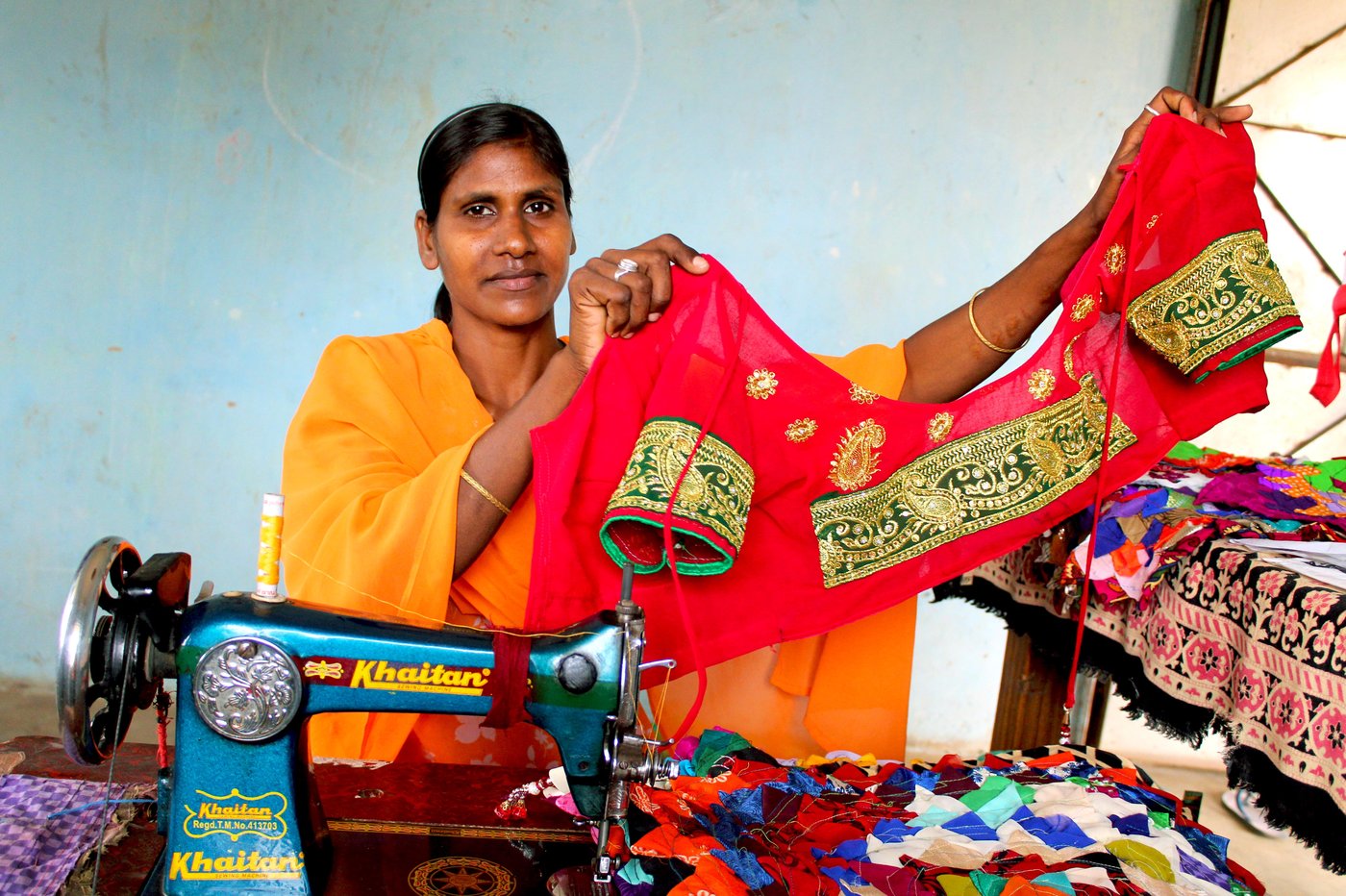 Sunanda committed two crimes – the original sin of love and demanding a legitimate share of her family’s land in village Nihal Prasad of Dhenkanal district in Odisha. And she has paid a heavy price

“Did you hit the dog?” they asked. Before Sunanda Sahoo could answer, a wooden rod landed on her head. Her next memory is of waking up in a hospital.

The dog was an excuse. They did not like him. The brothers who had plaited her hair and called her a doll had become vicious strangers many years before Sunanda adopted the stray mongrel. “Die or run away – they would say every day. Petting the dog took away some of my loneliness. I called him Kaalu,” she says.

The beating came six years after Sunanda returned home in 2010 and two months after her ailing and bedridden father Krishna Nand Sahoo passed away. He had wordlessly watched his daughter’s humiliation by his two sons, their wives and three children. His wife, Kanaklata, had also chosen silence.

To Sunanda, it was made clear that she was neither welcome nor needed. “They did not even give me soap and oil,” she says. Food was severely rationed. It was then that a concerned neighbour alerted a social worker, who encouraged Sunanda to seek help from the village panchayat. Relief came in the form of the state’s monthly pension of Rs. 300 for distressed women. Also, supplies of 25 kilograms a month of subsidised rice under the Antyodaya Scheme.

In the village of Nihal Prasad (Gondia tehsil , Dhenkanal district, Odisha), many had tried to subtly reason with Sunanda’s brothers. “They did nothing,” shrugs 45-year-old Ramesh Mohanty, one such concerned villager.

The brothers offered no sympathy to the sister, who they believed had tarnished the family’s reputation. “Their wives threatened to leave them if they had anything to do with me,” Sunanda says.

This punishment was for Sunanda’s original sin – love. But it was when she made a far worse, second transgression, that they decided to deal with her even more cruelly.

In May 2016, Sunanda, then 36, demanded her share in their deceased father’s nine-acre farmland. Her case was simple: “Land had been sold to finance the marriages of my two sisters. Since I had not married, I had an equal claim to a portion of the remaining land.”

Sunanda’s demand was unacceptable and unpardonable. This is a country where, the All-India Report on Agriculture Census 2010-11 tells us, male operational land holdings (excluding institutional plots) account for 87.2 per cent of the total. Women hold just a tiny slice of 12.8 per cent.

The brothers thrashed her one afternoon under the pretext that she had beaten up Kaalu in a fit of rage. “Tomorrow she will start hitting us,” they shouted while bringing the rod down on her. 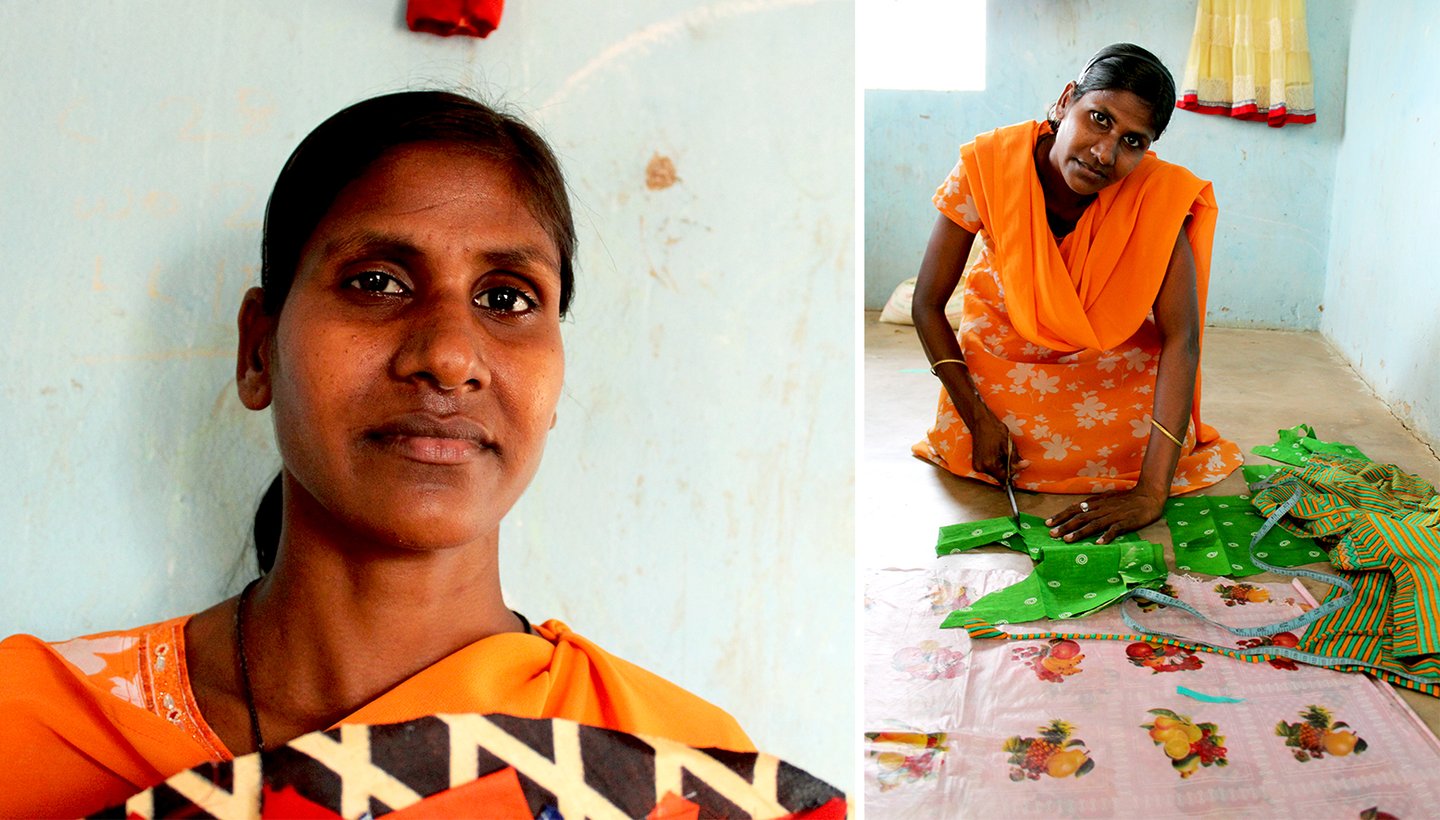 Sunanda in the room given to her by the panchayat in the village community centre. (Right) At work cutting fabric to make garments

There’s a slim brown file with Sunanda’s case details, some 90 kilometres from her home. That’s at the Women’s Support Centre, located in the Superintendent of Police’s office in Dhenkanal. “Head Trauma. Now complaining of head reeling. Recommended CT scan,” reads a medical report in the file. It’s from the SCB Medical College and Hospital, Cuttack, to which she was referred after initial treatment at Dhenkanal.

Bhanumati Pani, the social worker who helped Sunanda approach the panchayat, is a counsellor at this centre, set up under the Protection of Women from Domestic Violence Act , 2005 . Some 1,212 women have sought help here between its launch in April 2009 and March 2016, says a white flex poster at the centre. This help, as envisaged in the Act, has come mostly through counselling and mediation. Very few women formally approach the police or courts directly. The scale of emotional and physical violence in Sunanda’s case prompted Bhanumati to arrange legal aid for her. And a case was filed under several Sections of the Indian Penal Code against Sunanda’s brothers and their adult children.

The case ensured that Sunanda and her mother were granted two rooms in the most rundown portion of their seven-room home. Her brothers made overtures of peace. The two sisters vacillated between supporting them and Sunanda. A fragile peace was bought.

“Life would have been so different if I had known my options earlier,” Sunanda rues.

That ‘earlier’ is March 2007 – the month Sunanda, then 27, was brutally assaulted by Biswajeet Dhala. This once charming, then persistent and later angry lover had been shadowing Sunanda since she was an 18-year-old student of Class 10. He would whistle, throw letters at her, shine a torch beam on her face and sing as she walked by. Scared, she had confided in her mother, who explained the display of affection as good-natured teasing. “I began to enjoy his presence. He made me feel good,” Sunanda says. Wrapped in that euphoria, it did not matter to her that Biswajeet was 20 years older than her. Or that he was unemployed.

Euphoria morphed into despair when her family first broached the subject of marriage. “His sister said I was ugly and had trapped her brother,” Sunanda remembers. For a young girl who had, till then, been doted upon by her parents and siblings, this was unacceptable. “I felt like a nothing,” she whispers. Biswajeet still persisted, but thereafter Sunanda was unmoved.

“He tried to lure me with promises. He wrote long love letters saying he would wait forever. He also sent mediators to my father, but I had decided not to marry into a family which had rejected me for my looks,” Sunanda says.

Her resolve was made firmer by the memory of her grandfather Shorya Charan Sahoo, a freedom fighter. “I could never imagine doing anything that brought shame to him,” she explains.

The 2007 attack was in retaliation for her constant refusal to marry. When she stepped out of home one night to relieve herself in the fields, she had felt a vice-like grip around her throat. 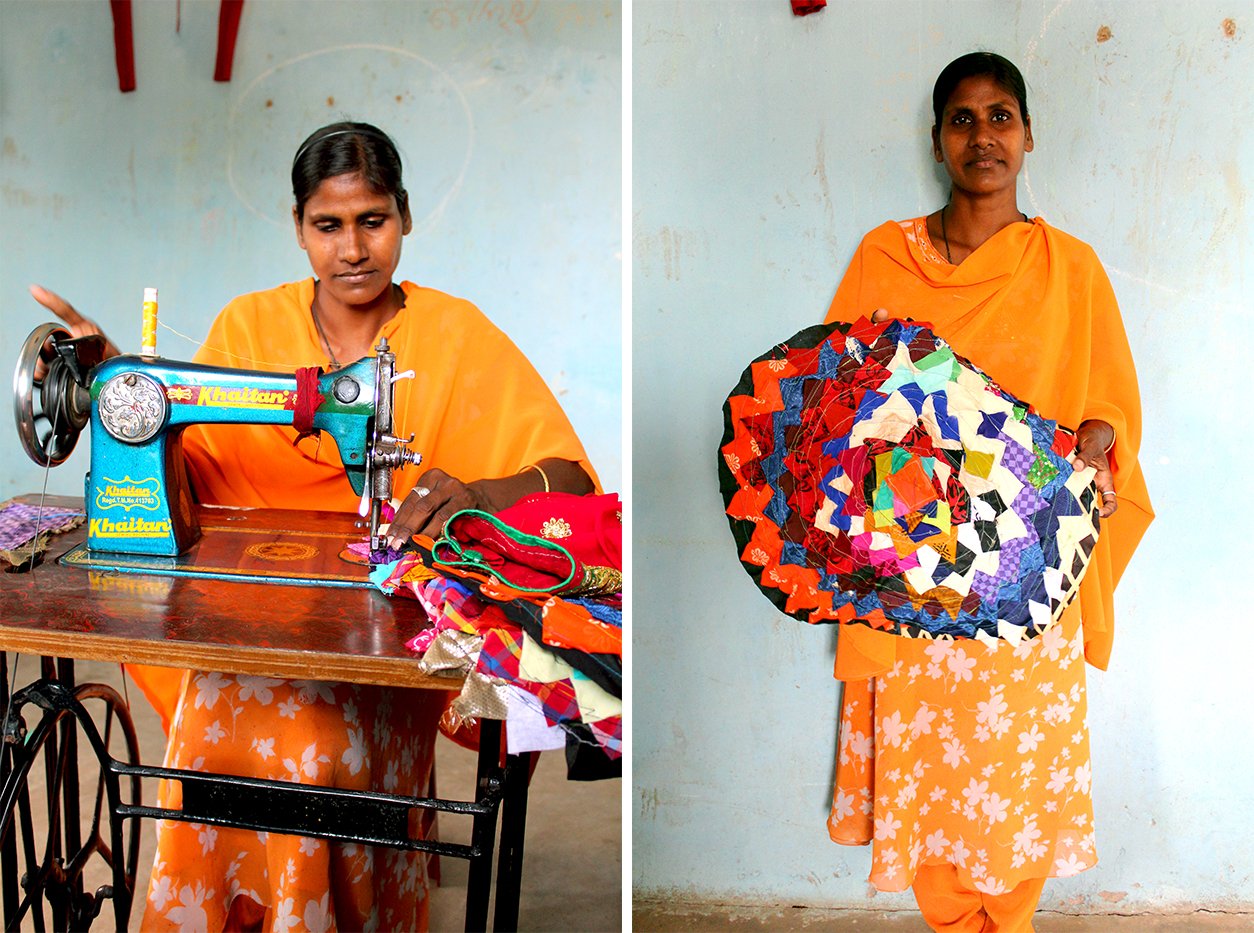 The sewing machine she uses was given to her by a charitable organisation. (Right) With a just finished product

Two days later, she woke up at the Community Health Centre, four kilometres away from home. “I do not remember if I was raped, but my clothes were torn. The police refused to listen. No tests were carried out on me,” she says. Sunanda’s own family brushed aside the need for police help and asked her to marry Biswajeet as the only means to repair a family reputation tarred by her audacity. Their actions were goaded by Biswajeet’s complaint of forced entry and destruction of property against Sunanda – a complaint they feared could singe them as well.

In the absence of police help and family support, Sunanda was unable to bring Biswajeet to justice. Two months after the attack, he married an 18-year-old.

Sunanda, meanwhile, was asked to stay away from home till the other sisters were married.

For the next three years she was tossed around shelter homes and relatives. The only brief slice of succour came when she learnt tailoring while staying with a relative in the neighbouring district of Jajpur. A charitable organisation gave her a sewing machine.

That machine now sits in a dusty room attached to the village community centre. This has been Sunanda’s workshop since January 2016, when the panchayat gave her permission to use the centre. It’s where she stitches blouses and salwar-kameez sets – a couple of which hang on the walls. She also fashions circular rugs from leftover scraps of cloth, painstakingly matching colours and prints.

On good days she earns Rs. 200, on average ones, Rs. 25. That, coupled with the money she makes from selling goats, adds up to a monthly income of Rs. 3,000 – enough to look after her 75-year-old mother but not enough to buy new clothes for herself. The bright orange outfit she wears today is a hand-me-down from one of her sisters.

She is steadfast in her refusal to marry despite her mother’s insistence that it will ensure ‘respectability.’  “Marriage is no guarantee of happiness,” she says. 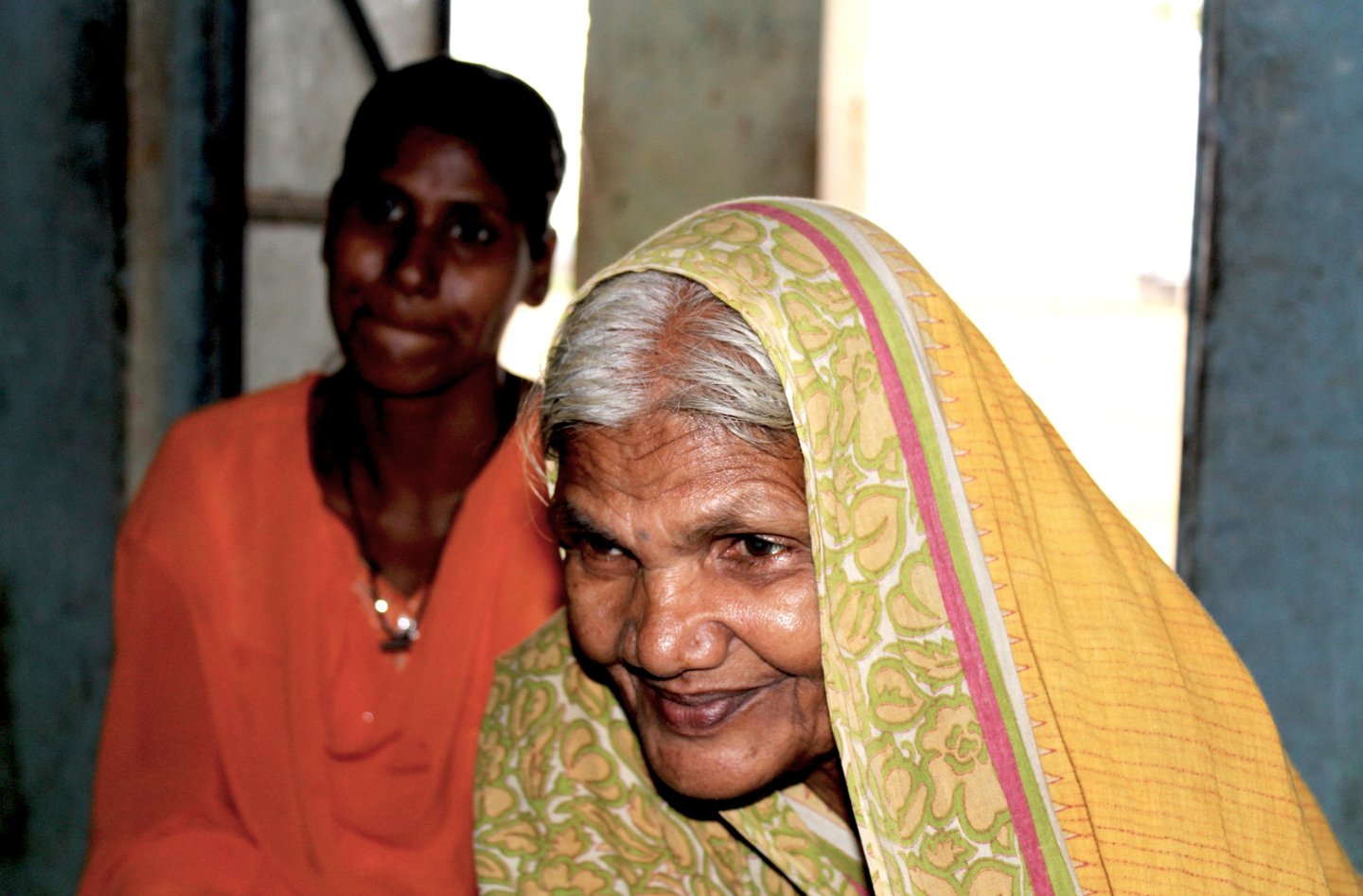 Though the rejection of the family has made Sunanda bitter, she has never been subsumed with guilt. “I did no wrong,” she insists.

Once the police case is disposed of, she plans to legally fight for her share of land. She wants to take her mother on a pilgrimage, plans on dairy farming and hopes to grow flowers, including her favourite rajnigandhas . “Maybe I could become an anganwadi helper,” she adds.

She would also like to adopt a dog. “Just like Kaalu. He passed away last year,” she smiles.