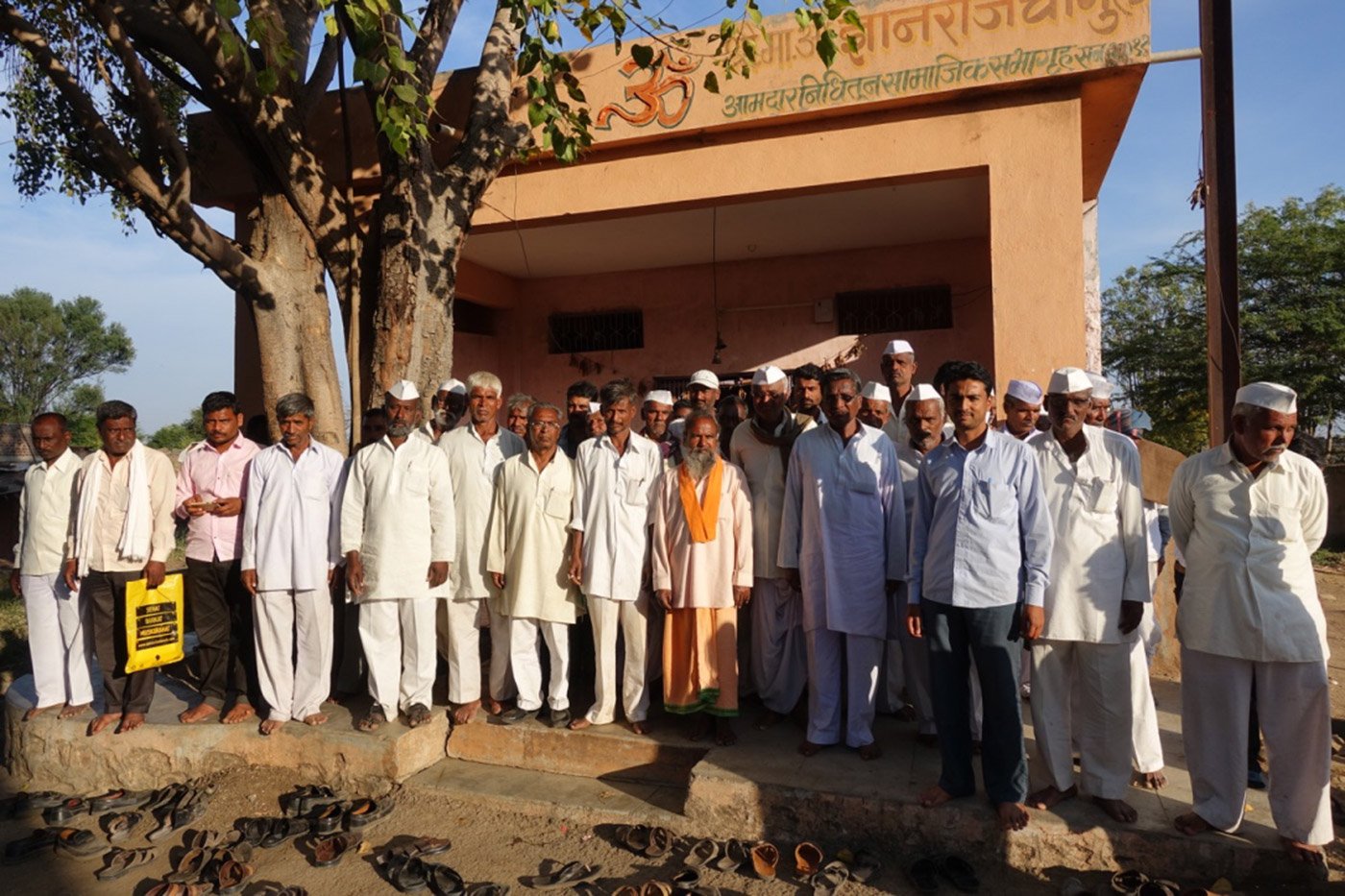 As demonetisation woes deepen, an Osmanabad bank does little to recover Rs. 352 crores owed by two sugar factories, but threatens 20,000 farmers who owe it Rs. 180 crores with public humiliation

The bank has “decided to use Gandhigiri to try and recover the loans [from you].  For this the bank has decided to do one of the following: 1) Put up a tent opposite your house to protest, 2) Make use of a band, 3) ring bells.

“Due to these actions, your standing and image in society are likely to be in danger.”

That is the Osmanabad District Central Cooperative Bank (ODCC) promising 20,000 of its clients public humiliation and ridicule. Those clients, mostly farmers, have seen many years of distress. Sometimes from crop failure, sometimes from a glut or price crash. A crippling drought and water crisis have further hit their loan repayments.  On top of that, the government’s recent scrapping of Rs. 500 and Rs. 1,000 notes has left them unable to pay their labourers’ daily wages. “Farm workers have not been paid a single paisa in cash since November 9,” says S.M. Gavale, a small farmer from Khed village. “All are hungry.”

The bank’s letter ( see translated excerpts at the end of this story ) tells farmers they are to blame for its depositors being unable to withdraw cash. And warns them: “You should be aware that if any depositors commit suicide for such reasons, you will be held responsible…”

In this situation, village visits by bank ‘recovery teams’ that threaten farmers and their families spur mounting tension and despair. Oddly, the 20,000 farmers together owe the ODCC some Rs. 180 crores. Just two sugar factories, Terna and Thuljabhavani, together owe the same bank Rs. 352 crores. But the tactics the bank plans to use on small peasants vanish when it comes to companies controlled by the powerful. “The factories are shut,” says the ODCC’s executive director Vijay Ghonse Patil. So no ‘Gandhigiri’ there. Nor has the valuable land these outfits own been seized or auctioned by the bank.

“This ‘Gandhigiri’ plan was inspired by Shri Arun Jaitley’s speech.” So says Ghonse Patil, author of the letter that has sparked outrage in the villages. Speaking to us at the bank’s headquarters in Osmanabad town, he defends his action: “It draws on the union finance minister’s warning of action against  defaulters during Parliament’s budget session.” 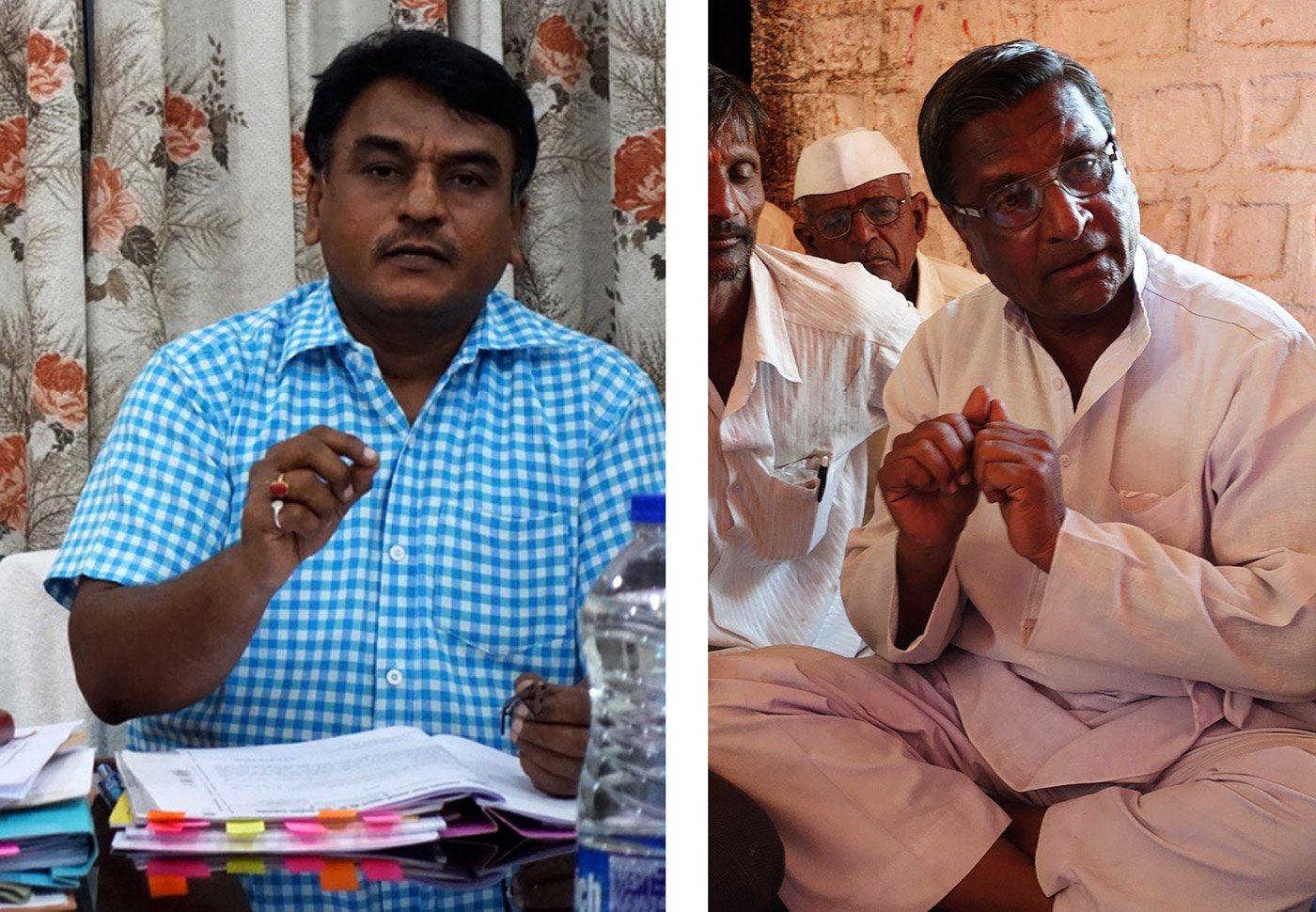 Left: Vijay Ghonse Patil, executive director of the ODCC, at the bank's headquarters in Osmanabad town. Right: A farmer in Lohara block explains the problems they face

“I drafted the letter,” says Ghonse Patil. “And I am serious about it. We need to bring non-performing assets (NPAs) below 15 per cent (of total advances) by March 2017. I have to pursue this strongly. I have no other way.” He admits it was drafted without legal advice and “submitted to the Bank’s Board of Directors, which okayed it.”

Several of the letters bear an October date but the farmers scoff at this. “They were delivered at our homes after November 15.” In other words, these letters came out after the demonetisation. Ironically, one of those ‘receiving’ the letter  on December 2 was Manohar Yelore. He was a small farmer in Lohara village who committed suicide in 2014, unable to repay the Rs. 68,000 he had borrowed from the bank.

In Nagur village of Lohara block in Osmanabad, farmers gathered from many villages tell us they are shaken: “We will have no option but to take our lives if subjected to such humiliation.” In the state government’s own count, Osmanabad and Yavatmal rank as the worst districts for farmer suicides in Maharashtra. And the state itself has suffered more farm suicides than any other in the country – at least 63,000 between 1995 and 2014, according to the National Crime Records Bureau.

Here, demonetisation has hit both the bank and its clients alike. The cash crunch has squeezed both. Cooperative banks were allowed to accept the banned notes and exchange them for new ones for only three days. All other banks could do this till November 29. The Osmanabad District Central Cooperative Bank was already in big trouble with its giant defaulters repaying not a paisa of the Rs. 352 crore they owe. “And they’re taking it out on us,” say farmers here. “We are people who’ve tried to repay something.”

With no cash at all, the farmers, labourers and shopkeepers here have worked out a fragile survival strategy after November 9. S.M. Gavale of Khed explains it: “If the labourers don’t have cash, they cannot eat. But we stand guarantee for them with the shopkeepers. They pick up provisions on credit.”

Video: Farmers from Nagur, Khed, Kasti and other villages display the letter from the ODCC threatening to humiliate them with 'Gandhigiri' tactics; November 29, 2016

The local shop owners themselves are bringing in their stocks on credit from wholesalers based elsewhere. So the labourer, the farmer and the shopkeeper could all be locked into a disaster waiting to happen.

There’s another huge problem. A few years ago, the bank started collapsing ‘crop loans’ and ‘term loans’ and rewriting the figure of what was owed by the farmer. The ODCC seems to have done this repeatedly over several years. The result is an explosion in the size of  the amounts owed by farmers. It is these inflated loan figures the letter asks the farmers to repay. Indeed, the Rs.180 crore sum the 20,000 farmers together owe is a post-‘re-phasement’ figure. The original amount borrowed by them was Rs. 80 crores.

A crop loan is a short-term borrowing by farmers in the form of cash credit. This is directly tied to their immediate agricultural activity or season. They might buy their seeds, fertiliser, pesticide and other inputs, and pay labourers, from of this sum. They  withdraw cash against this loan as and when required, within the limit of the sanctioned sum.  Interest rates on crop loans normally don’t exceed seven per cent (of which four per cent is to be borne by the state government). These loans have  to be renewed each year.

Term loans are those taken for capital investment – for purchase of machinery, irrigation, and other such expenses. These loans can be repaid over a period of 3-7 years. They are given at (compounded) rates of interest that could be double of what crop loans attract.

Dhananjay Kulkarni, general secretary of the Bank of Maharashtra Employees Union, Aurangabad, is with us and has studied the ODCC’s letters and notices. “What the ODCC (and other banks) have done,” he says, “is to collapse or club together the crop and term loans of these villagers and convert them into ‘new’  term loans. Under the title of ‘re-phasement’. The ODCC, like other banks, struck an interest rate of 14 per cent on these. However, an additional 2-4 per cent interest was added on at the level of the coop societies through whom the loans were delivered. Finally, the borrower pays 18 per cent (compounded)  interest.” 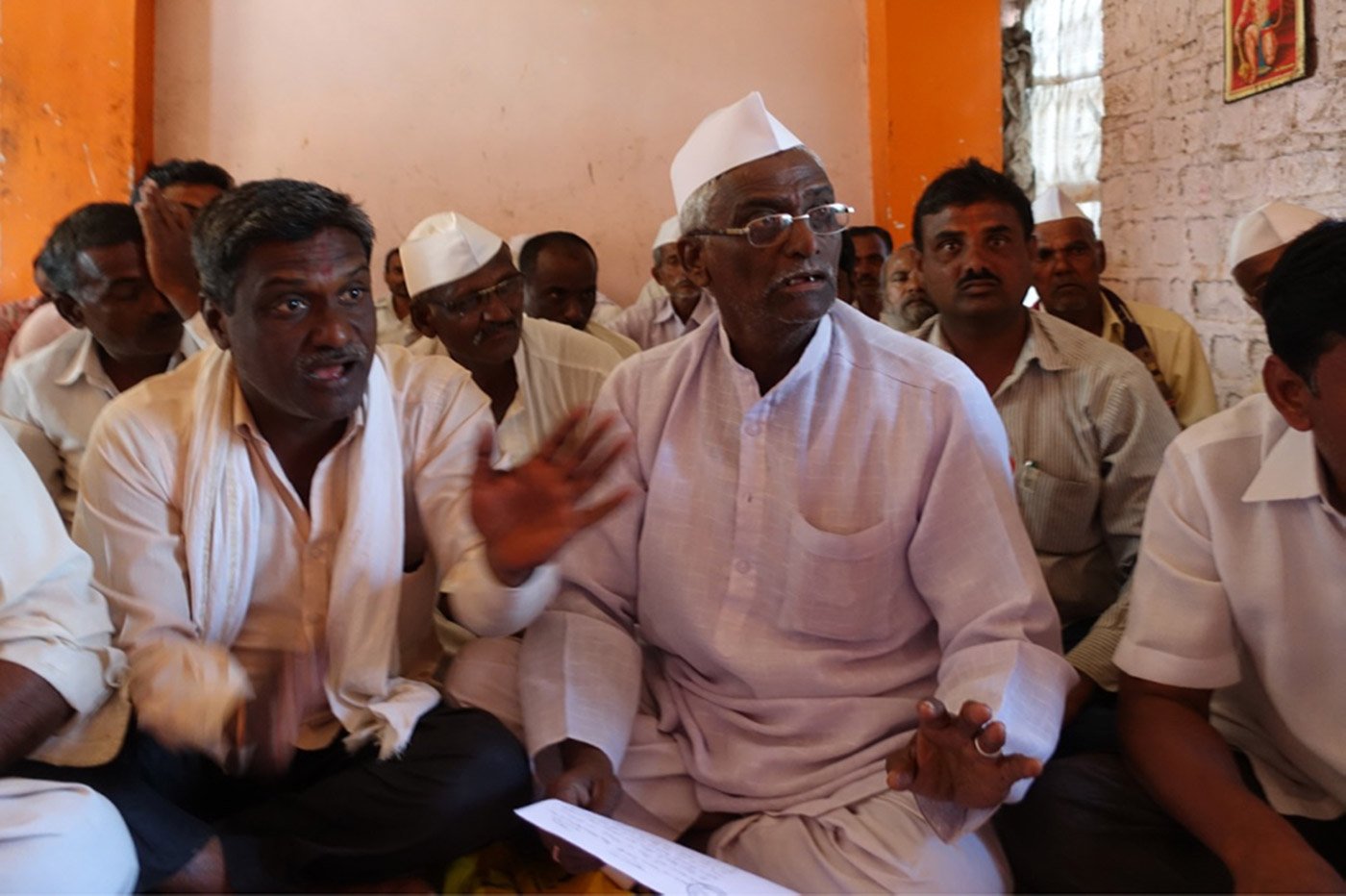 In Nagur village, agitated farmers explain that the loan amounts have been inflated

Shivajiraosaheb Patil from Khed village had borrowed Rs. 1.78 lakh in 2004 to pay for an electric motor and installation of a pipeline. He paid back Rs. 60,000 in the early years. But this was then clubbed with his crop loan and ‘re-phased’ in the jargon of the bank, more than once. And “now they tell me I owe over Rs. 13 lakhs,” he says angrily. Suddenly, dozens of farmers are on their feet, speaking at the same time. They’ve all brought along the notices the ODCC has sent them.

“We accept we owe the bank money,” says Babasaheb Vithalrao Jadhav, a farmer of many decades in Nagur. “And indeed we must pay. But we are unable to right now. Because of good rains this year [after many bad seasons], farmers here have had a decent kharif crop and expect a good rabi crop too. So we could pay in instalments from next year. Paying this year would kill us. ‘Re-phasement’ was a fraud that violates even bank rules. It has doubled, even quadrupled our loans. The government is giving waivers to corporates (NPAs) and the super-rich. But cracking down on distressed farmers.”

Many of these loans and their ‘re-phasing’ were also badly timed. They seem to chart the course of the agrarian crisis in Maharashtra. Starting around 1998, making a huge leap in 2003-04 and exploding after 2011. “For four  years,” says Shivajirao, “I had 300-400 tons of excess sugarcane crop I was unable to sell. The factories were flooded with cane and declined to lift it. I went bankrupt. Now I’m  faced with this demand.  I have sold 15 acres of our family’s (un-irrigated) land. But I still can’t handle the burden.”

Most of the rabi crop was sown in these villages before November 8. But transactions thereafter have taken a hit. Kharif crop prices have tumbled with traders “offering us the right amount only if we accept old notes,” farmers say.

Back at the bank, the atmosphere is now much more sober, even sombre, as we discuss the possible consequences of the ODCC acting on its letter. 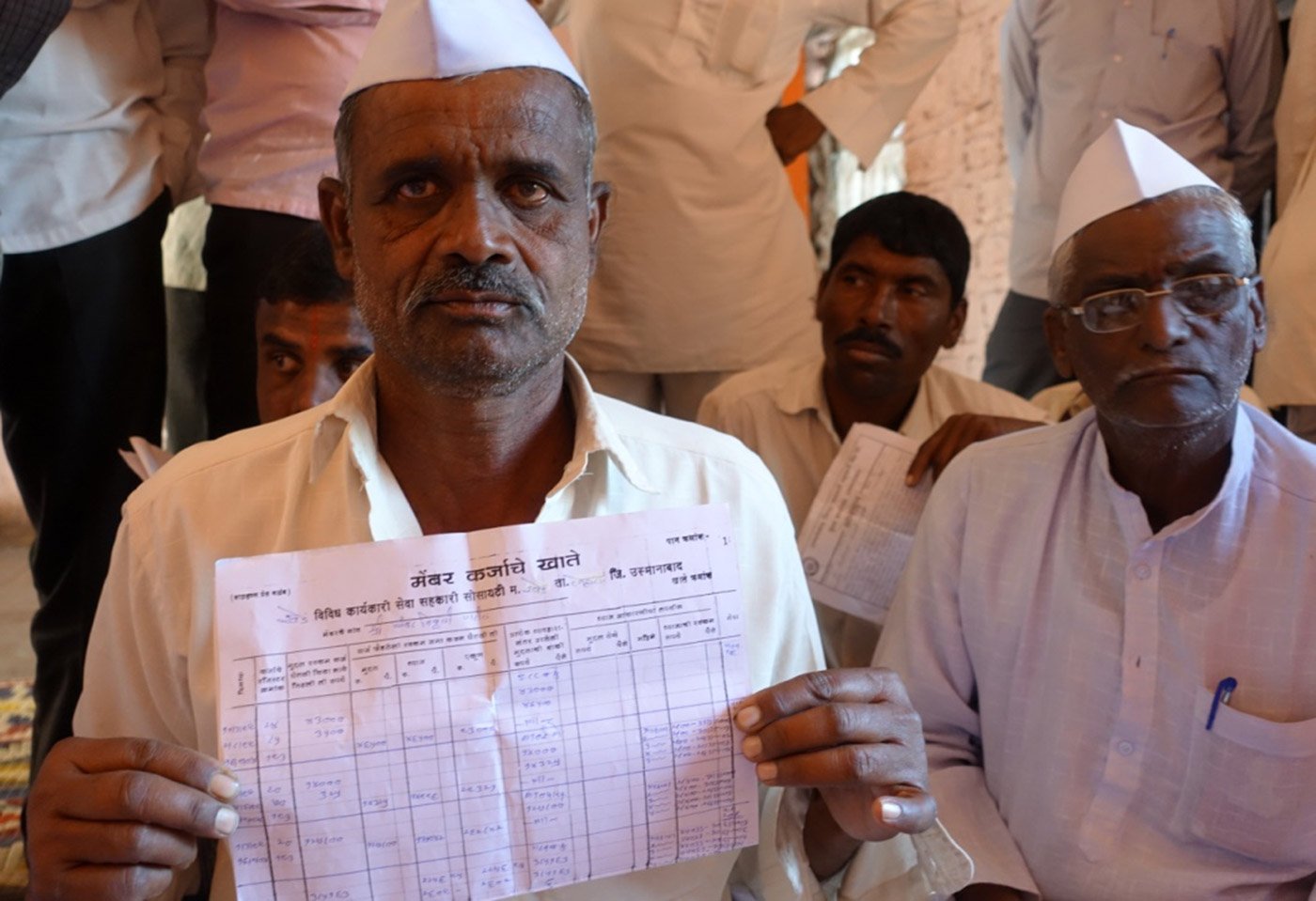 A farmer in Nagur holds up an extract of his loan account from the credit cooperative society; further interest of 2-4 per cent gets added at the level of the societies

Executive director Ghonse Patil himself faces a notice for un-refunded advances from a cooperative bank in another district. He and some of his senior officers only now  seem to grasp that things can go very wrong from here. What if there was a spurt in farm suicides? What if those are blamed on the bank and its letter? But, says Ghonse Patil, as we part, “We have no other way out but to go for this recovery abhiyan .”

Translated excerpts from the ODCC’s letter in Marathi to nearly 20,000 farmers in Osmanabad district

You must be aware of the economic situation of the Osmanabad District Bank. Since the bank is in financial difficulties, the bank depositors have their full focus on the bank. Due to the increase in overdue unpaid loans there is the fear of loss of liquidity for the bank which is now caught in this quagmire. At least at this time, the only option the bank has to improve its situation is to recover the overdue loans. Naturally, due to the pending loans with you, the bank is unable to pay its depositors the amounts they want to withdraw whenever they want to withdraw. As a result, the depositors are very disappointed with the bank operations.

Similarly, many depositors, when they are faced with the prospect of being unable to withdraw their own money from their accounts are sending us statements that if they cannot withdraw their money, they will be forced to commit suicide and you should be aware that if any depositors commit suicide for such reasons, you will he held responsible and you should understand this.

…Because of your overdue loan, the bank is facing a cash crunch and the bank cannot conduct its operations effectively. The bank's management committee, senior officers and employee association have decided to use Gandhigiri to try and recover the loans. For this, the bank has decided to do one of the following: 1) Put up a tent opposite your house to protest 2) Make use of a band  3) Ring bells

Due to these actions, your standing and image in society is likely to be in danger. Therefore, to avoid such a situation, you should immediately repay your overdue loans with interest in the concerned bank within 30 days and take a receipt for such payment else, the recovery team will take action as explained above.

We are deliberately writing this to you so that you are aware of the situation.
We are in no doubt that you will repay your loan and avoid any unpleasant events from happening.
Expecting your cooperation.
Details of Overdue Loans:
Type of loan, Principal: 136300  Interest: 348930. Total: 485230
[loan details for each farmer follow in the original letter].