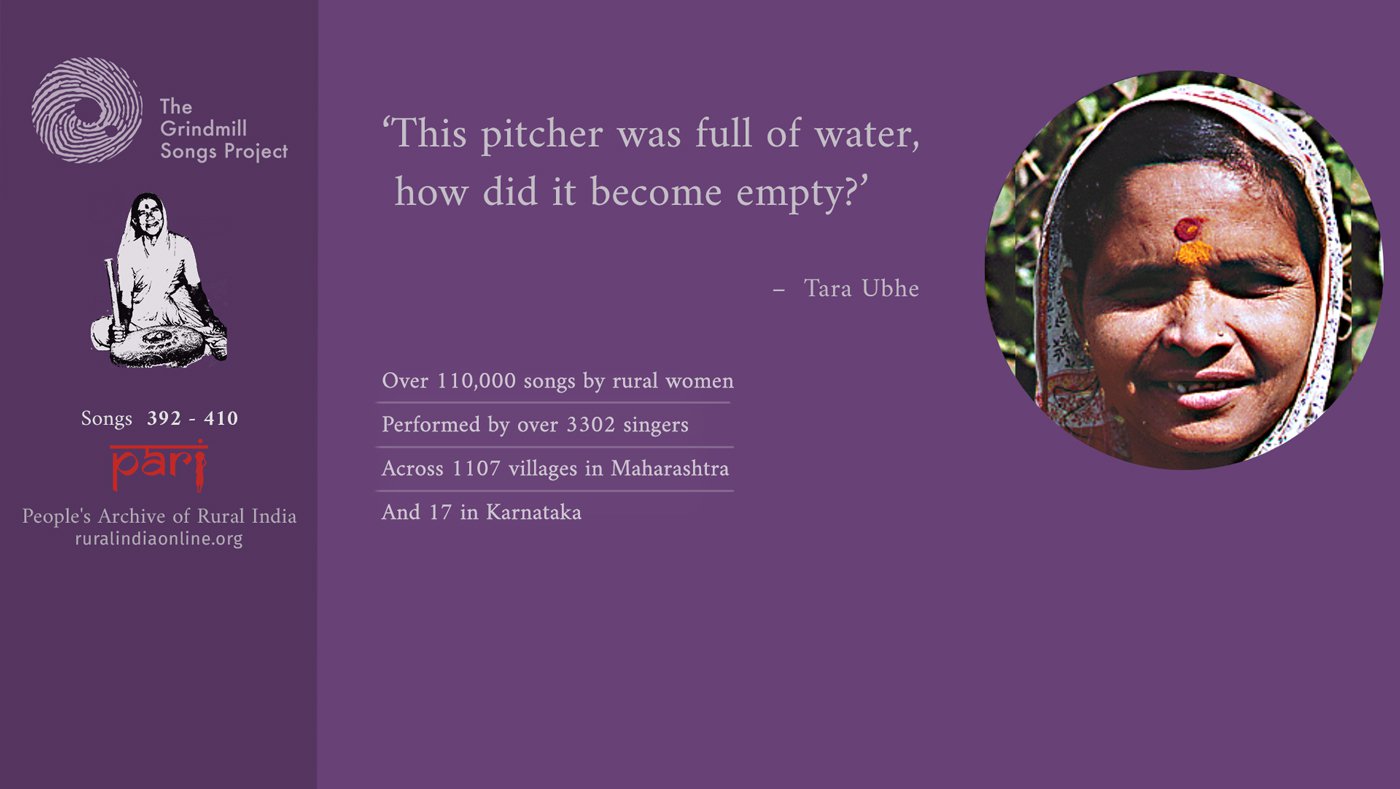 Women, patriarchy and songs of rivalry

Three women from Mulshi taluka in Pune sing grindmill songs about the impact of a young and attractive woman’s behaviour on a married woman’s husband or son. They see in her a threat to their own happiness

Patriarchal society doesn’t just oppress women, it constantly pits them against one another. The grindmill songs cover a wide range of experiences of women who live in rural communities where the framework of patriarchy dictates every aspect of life. The women who sing these songs cry out in protest against society’s norms, where the birth of a girl child is a calamity for the parents. Their songs question why, when the  sons and daughters are like oranges of the same tree, their treatment differs – and why the work that a woman performs holds no value. And yet, there are also songs which present marriage as the ultimate goal, the route to happiness for women.

The grindmill songs are a fine example of a cultural practice that connects and divides women, reproduces and questions a social order, and liberates and conditions a generation of singers and listeners. It is in this environment that friendship and a sense of sisterhood among women is celebrated – as many of the songs do.

However,  there are also grindmill songs that reveal rivalries between women and reflect on them. Often,  rivalry is presented as jealousy arising from women sharing the influence on a man – either a husband or a son. They give a succinct picture of the vulnerabilities that mark the lives of women, whose very existence depends on the recognition and attention that they get from the men in the family –  a father or brother, and, as in the songs presented here , a husband and son.

In these ovi , an older, married, and therefore a respectable woman, is placed against a younger, unmarried woman who is looked upon with suspicion, especially because she is both attractive and outgoing. In the first three ovi , a woman – younger – is accused of indecent behaviour. To describe her actions, the verse alludes to a Marathi proverb: “A slanderous woman has let the water from the eaves seep into the  thatched roof of a home.” Her wicked deeds are said to be so many that “a pot of water has been emptied … [and] the woman has slipped a tortoise into the well water.” The phrases imply the deliberate nature of her behaviour that destroys the happiness of another woman. 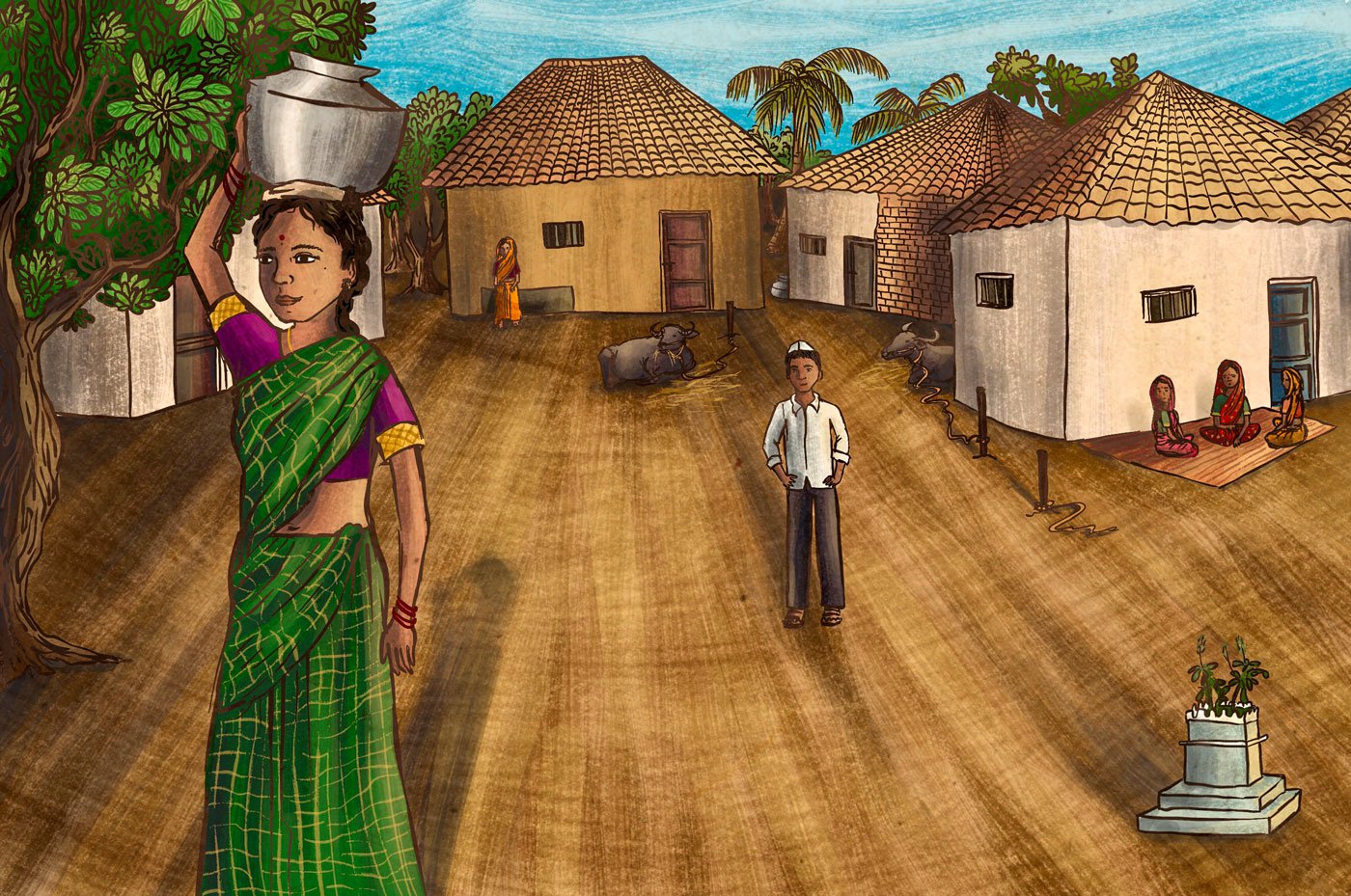 "Guavas float in her pitcher, as the woman goes to fetch water, My son jokes with her, to provoke smiles and laughter"

In the next 14 couplets, the singer elaborates on the conduct of a woman in the prime of her youth. The narrator fears that her husband might fall prey to the younger woman’s beauty. The wife, therefore, tries to diminish her attractiveness by saying, “Your youth is only worth as much as my saree… [or] my toe-ring.” The singer also comments on her son’s attempt at flirting with the young woman. She speaks of this with affectionate indulgence, by addressing her son as raaghu (parrot), a term of endearment used in the grindmill songs to refer to a son or younger brother.

The last two longer stanzas stand out from the previous 17 couplets. Here, the woman wants to find a solution to the many distractions in her son’s life. Comparing her son to a tiger who cannot be tamed or tied to a chain, the narrator ardently wishes to get him married. She wants to welcome his bride, her daughter-in-law, into their home. This will elevate her own stature as the mother-in-law and bestow her with some authority over the younger woman. Hidden, perhaps, is a need to protect her son from getting into relationships outside the traditional, marital and patriarchal structure. Or an innocent belief of a mother that marriage will keep her son from straying.

Several of these ovi end with a phrase “ na bai… ” which communicates the conversational nature of these songs. Very much like the words “you know what happened …” It is as if the singer is sharing the stories within the songs with other women at the grindmill.

Three singers from Mulshi taluka of Pune district sang these nineteen ovi : Kusum Sonawane and Shahu Kamble of Nandgaon village, and Tara Ubhe of Khadakwadi hamlet in Kolavade village. The songs were recorded on October 5, 1999 in Pune, in the meeting room at the bungalow of Hema Rairkar and Guy Poitevin, founders of the original Grindmill Songs Project.

The slanderous woman, her behaviour is outrageous, for sure
She took water of the eaves to the thatched roof, the evil-doer

The notorious woman, very often she behaved indecently
This pitcher was full of water, how did it become empty?

The slanderous woman, so many times she behaved salaciously
Friends, what could I say, she released a tortoise into the well, slyly

A young woman in the prime of her youth, frequents my home
My son, my raaghu , is youthful like a golden champak blossom

O woman in the prime of youth, stand here and talk to me
For me, your youth is not worth a whit more than my saree

The young attractive woman, who has crossed me
The value of your youth is the same as my toe-rings

O woman full of youthful beauty, don’t be so showy
Flies will hover over you, when your youth fades away

Speaking to me, the young woman doesn’t care to be humble
Her brocade saree is not comparable to mine, which is simple

O young woman, to whom do you show off your youth?
Why do you apply a black spot below your kunku ?

O young woman, you are attractive, your beauty is jaalim [strong]
Beware, along the path you go to fetch water, is my son’s taalim [gymnasium]

O young woman, tone down your youthful attraction
The son of my womb, Bansi, is filled with confusion

Guavas float in her pitcher, as the woman goes to fetch water
My son jokes with her, to provoke smiles and laughter

She frequents my house, the young woman in her prime
O woman, she looks for my son’s cap on the clothes line

The woman goes to the tank, not the well, to fetch water
My son, as alert as a soldier, is waiting at the corner

The woman goes to fetch water, to the draw-well, not the well
Like a guard on watch-duty, my son is standing there

She frequents my house, the young woman in her prime
I am fed up, how often do I tell her, my son is not at home

My baby’s clothes are drying in my home’s courtyard
She [barren woman] crosses them, let her youth burn

O young woman don’t wander about freely
Fetch the horse, decorate it, let the wedding procession go
Let me welcome my son’s bride into my home

My brave young son, like a tiger, has no leash
O Rakhu, what can I tell you, he is so distracted [by women],
Even on the wedding day, as the ceremony goes on
Fetch the horse, decorate it, let the wedding procession go
Let me welcome my son’s bride into my home 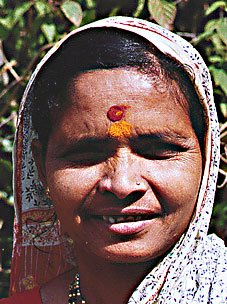 Occupation: Farmer. Her family owns one acre of land and grows rice, wheat, ragi and some little millet. 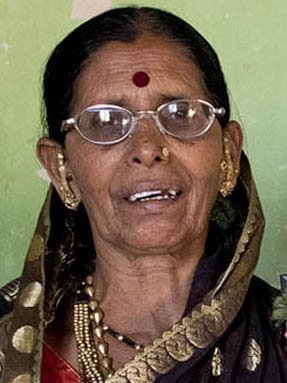 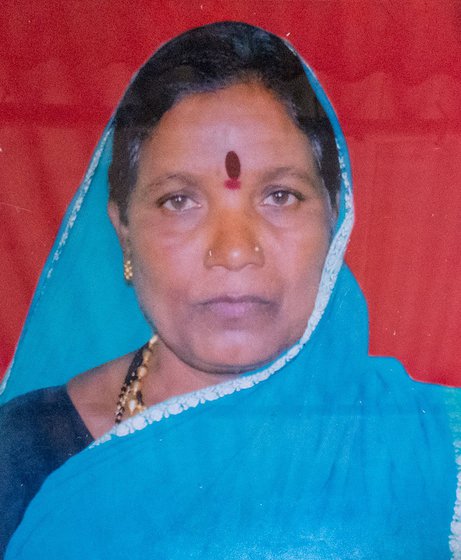