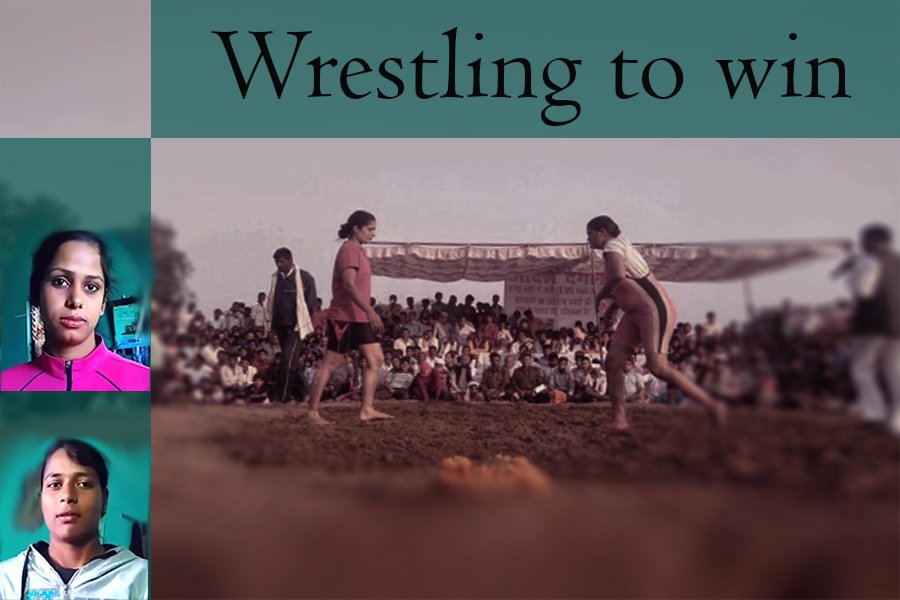 ‘Women – they should be everywhere’

At a recent wrestling competition in Faizabad, UP, open to women for the first time perhaps due to the popular Hindi film ‘Dangal’ – two confident young wrestlers, Shivangi and Anjali, signed up

With its takeover of box office records, the film Dangal has been an inspiration not just in Haryana, but for girls interested in wrestling elsewhere as well. It has brought excitement and a new wave of energy – and we witnessed this up-close in Faizabad, in the pit and off it, in our chat with contestants Shivangi, 19 and Anjali, 20.

An annual wrestling event, with the no-nonsense title of ‘Mahadangal’ [mega wrestling competition], is organised in Gosaiganj, Faizabad, Uttar Pradesh, usually in January and February. It’s little wonder that for the first time in the four years since the event began, this year it was open for girls who wanted to contest. Shivangi from Gorakhpur and Anjali from Lucknow signed up.

We first saw them somersaulting through the air and managing seemingly impossible manoeuvres, while we caught up on the buzz about who has a better chance at winning the title, who’s going to get better at her game.

Shivangi, a national-level player from Gorakhpur, exudes confidence. A professional wrestler, she tells us that she has some 70-odd medals lying around her house. “I have never lost a state level match”, she smiles. “Every contest I take part in, I win.” Shivangi spent years practicing in Gorakhpur, which does not have a proper wrestling ground. But, she tells us, “there are always mats.” She was chosen for trials during the selections for state-level matches, and is now getting more formal training. Initially, her family was not supportive, but then gave in – what with having to make space for those 70 medals. Shivangi now also trains younger girls in wrestling as well as athletics, which she says is her other love.

Watch video: The two wrestlers, Shivangi and Anjali, are confident about winning

Anjali is a big city girl; she speaks of relatively more encouragement at home, but says that rewards are appreciated only when they can be seen. Like Shivangi, she is extremely confident about her wrestling career: “I am doing quite well now. I am positive that if I continue like this, there will be bigger and better opportunities that will come my way.” (Anjali won the Gosaiganj Mahadangal girls title this year)

The organisers of the Mahadangal, Hanuman Prasad Soni and Surajbhan Singh, had clearly factored in the ‘Aamir Khan effect’ with this year’s contest. We heard about lucrative ticket prices, and about ‘positive channelling of youthful energy’. Singh spoke of the social bonding that comes alive during dangal time and threw in this message: “There is such rampant alcoholism among the youth today. We sincerely hope that this inculcates in them a healthy outlook to life.”

Soni said he looks to the people of Faizabad and beyond to “take it [wrestling] to greater heights… This is our traditional sport, and we have it in us to do more for it.”

When asked about the participation of women, he nodded and said, “Women are representing our country internationally in sports. They are protecting the nation’s borders. So why not here? That’s why we thought we should have them participate and fight. Women – they should be everywhere.”

A slightly different version of this story in Hindi was published in Khabar Lahariya on February 1, 2017.