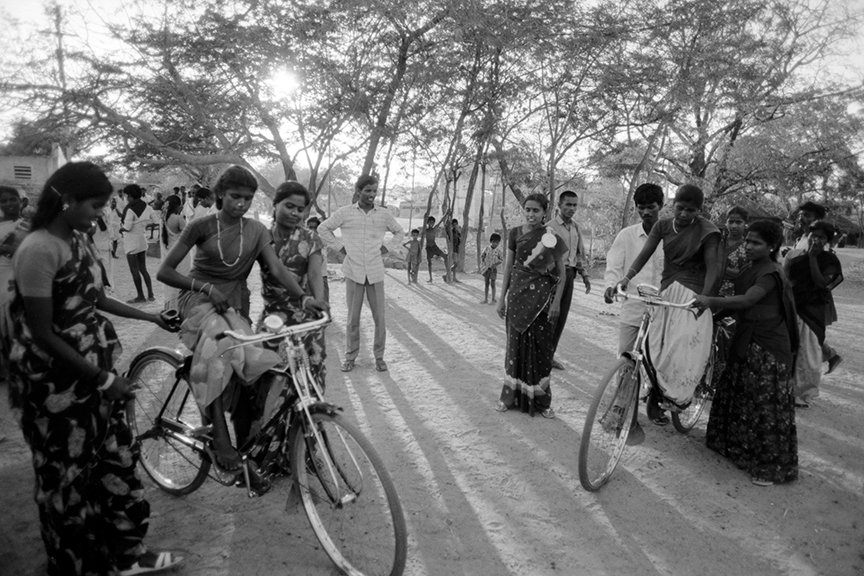 Where there is a wheel

Cycling as a social movement? Sounds far-fetched. Perhaps. But not all that far – not to tens of thousands of neo-literate rural women in Pudukkottai district of Tamil Nadu. People find ways, sometimes curious ones, of hitting out at their backwardness, of expressing defiance, of hammering at the fetters that hold them.

In this, one of India’s poorest districts, cycling seems the chosen medium for rural women. During the past 18 months, over 100,000 rural women, most of them neo-literates, have taken to bicycling as a symbol of independence, freedom and mobility. If we exclude girls below 10 years of age, it would mean that over one-fourth of all rural women in this district have learnt cycling. And over 70,000 of these women have taken part in public ‘exhibition-contests’ to proudly display their new skills. And still the training camps and desire to learn continue.

In the heart of rural Pudukkottai, young Muslim women from highly conservative backgrounds zip along the roads on their bicycles. Some seem to have abandoned the veil for the wheel. Jameela Bibi, a young Muslim girl who has taken to cycling, told me: “It’s my right. We can go anywhere. Now I don’t have to wait for a bus. I know people made dirty remarks when I started cycling, but I paid no attention.”

Fatima is a secondary school teacher, so addicted to cycling that she hires a bicycle for half-an-hour each evening (she cannot yet afford to buy one – each costs over Rs. 1,200). She said: “There is freedom in cycling. We are not dependent on anyone now. I can never give this up.” Jameela, Fatima and their friend Avakanni, all in their early 20s, have trained scores of other young women from their community in the art of cycling. 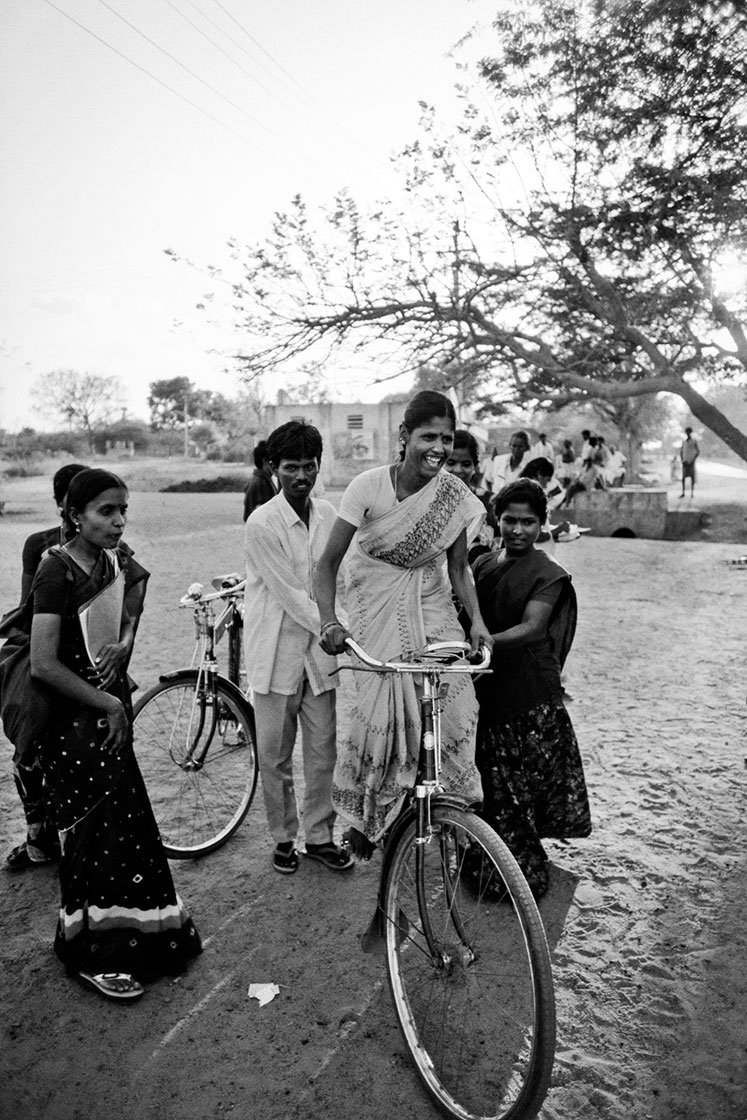 All the prospective learners at this Arivoli 'cycling training camp' had turned out in their Sunday best. The teachers, too, were very smartly attired

Cycling has swept across this district. Women agricultural workers, quarry labourers and village health nurses are among its fans. Joining the rush are balwadi and aanganwadi workers, gem-cutters and school teachers. And gram sevikas and mid-day meal workers are not far behind. The vast majority are those who have just become literate. The district’s vigorous literacy drive, led by the Arivoli Iyakkam (Light of Knowledge Movement) has been quick to tap this energy. Every one of the neo-literate, ‘neo-cyclist’ women I spoke to saw a direct link between cycling and her personal independence.

“The main thing,” said N. Kannammal, Arivoli central coordinator and one of the pioneers of the cycling movement, “was the confidence it gave women. Very importantly, it reduced their dependence on men. Now we often see a woman doing a four-kilometre stretch on her cycle to collect water, sometimes with her children. Even carting provisions from other places can be done on their own. But, believe me, women had to put up with vicious attacks on their character when this began. So many made filthy remarks. But Arivoli gave cycling social sanction. So women took to it.”

Early among them, Kannammal herself. Though a science graduate, she had never mustered the courage to cycle earlier.Visiting an Arivoli ‘cycling training camp’ is an unusual experience. In Kilakuruchi village all the prospective learners had turned out in their Sunday best. You can’t help being struck by the sheer passion of the pro-cycling movement. They had to know . Cycling offered a way out of enforced routines, around male-imposed barriers. The neo-cyclists even sing songs produced by Arivoli to encourage bicycling. One of these has lines like: “O sister come learn cycling, move with the wheel of time…”

Very large numbers of those trained have come back to help new learners. They work free of charge for Arivoli as (oddly-named) master trainers. There is not only a desire to learn, but also a widespread perception among them that all women ought to learn cycling. In turn, their experience has enriched the literacy movement. The neo-cyclists are bound even more passionately than before to Arivoli.

The whole phenomenon was the brainchild of the popular former district collector, Sheela Rani Chunkath. Her idea in 1991 was to train female activists so that literacy would reach women in the interior. She also included mobility as a part of the literacy drive. This flowed from the fact that a lack of mobility among women played a big role in undermining their confidence. Chunkath pushed the banks to give loans for the women to buy cycles. She also got each block to accept specific duties in promoting the drive. As the top official in the district, she gave it great personal attention.

First the activists learned cycling. Then neo-literates wanted to learn. Every woman wanted to learn. Not surprisingly, this led to a shortage of ‘ladies’ cycles. Never mind. ‘Gents’ cycles would do just as nicely, thank you. Some women preferred the latter as these have an additional bar from the seat to the handle. You can seat a child on that. And to this day, thousands of women here ride ‘gents’ cycles. Thousands of others dream of the day they will be able to afford any bicycle at all.

After International Women’s Day on March 8 in 1992, this district can never be the same. Flags on the handle bars, bells ringing, over 1,500 female cyclists took Pudukkottai by storm. Their all-women’s cycle rally stunned the town’s inhabitants with its massive showing.

What did the men think? One who had to approve was S. Kannakarajan, owner of Ram Cycles. This single dealer saw a rise of over 350 per cent in the sale of ‘ladies’ cycles in one year. That figure is probably an underestimate, for two reasons: one, a lot of women, unable to wait for ‘ladies’ cycles, went in for men’s bikes; two, Kannakarajan shared his information with me with great caution. For all he knew, I was an undercover agent of the sales tax department.

In any case, not all males were hostile. Some were even encouraging. Muthu Bhaskaran, an Arivoli activist, for instance. He wrote the famous cycling song that has become their anthem.

When, in the blazing heat of Kudimianmalai’s stone quarries, you run into K. Manormani, 22, training others, you know it’s all worth it. A quarry worker and Arivoli volunteer herself, she thinks it vital that her co-workers learn cycling. “Our areas are a little cut off,” she told me. “Those who know cycling, they can be mobile.” 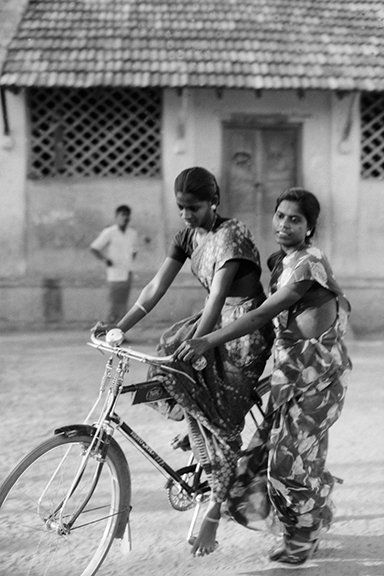 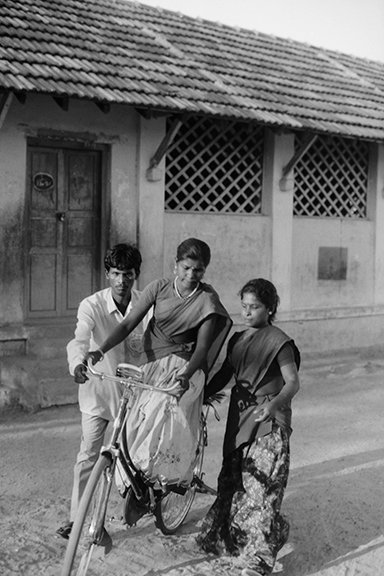 Over 100,000 women in Pudukkottai district learned cycling in 1992-93. It had positive economic implications for them, but for the women, the bicycle wasn't just about that. It was a metaphor for freedom

In a single week in 1992, more than 70,000 women displayed their cycling skills at the public ‘exhibit ion-contests’ run by Arivoli. An impressed UNICEF sanctioned 50 mopeds for Arivoli women activists.

Cycling has had very definite economic implications. It boosts income. Some of the women here sell agricultural or other produce within a group of villages. For them, the bicycle cuts down on time wasted in waiting for buses. This is crucial on poorly-connected routes. Secondly, it gives you much more time to focus on selling your produce. Thirdly, it enlarges the area you can hope to cover. Lastly, it can increase your leisure time too, should you choose to take a few moments off.

Small producers who used to wait for buses were often dependent on fathers, brothers, husbands or sons to even reach the bus stop. They could cover only a limited number of villages to sell their produce. Some walked. Those who cannot afford bicycles still do. These women had to rush back early to tend to the children and perform other chores like fetching water. Those who have bicycles now combine these different tasks with nonchalance. Which means you can, even along some remote road, see a young mother, child on the bar, produce on the carrier. She could be carrying two, perhaps even three, pots of water hung across the back, and cycling towards work or home.

Yet, it would be very wrong to emphasise the economic aspect over all else. The sense of self-respect cycling brings is vital. “Of course it’s not economic,” said Fatima, giving me a look that made me feel rather stupid. “What money do I make from cycling? I lose money. I can’t afford a bicycle. But I hire one every evening just to feel that goodness, that independence.” Never before coming to Pudukkottai had I seen this humble vehicle in that light – the bicycle as a metaphor for freedom.

“‘It is difficult for people to see how big this is for rural women,” said Kannammal. “It’s a Himalayan achievement, like flying an aeroplane, for them. People may laugh. Only the women know how important it is.”

I suppose the norms of standard journalism demand at this point some “balancing” quotes from men opposed to the cycling movement. Frankly, who the heck cares? There are a 100,000 neo-literate women cycling out there and that’s the story.

Those men opposed to it can go take a walk – because when it comes to cycling, they aren’t in the same league as the women.

Postscript: When I returned to Pudukkottai in April 1995, the craze was still on. But a large number of women were unable to afford bicycles – each now cost around Rs. 1,400. And a new generation was coming up that was too young to gain from the first round. But Pudukkottai remains unique among Indian districts for the stunning proportion of women who have taken to cycling. And the enthusiasm for gaining the skill among the rest.

This story was originally published in P. Sainath’s 1996 book Everybody Loves a Good Drought.