'What should my family do?'

In the Adivasi cluster of Boranda village, Vanita Bhoir and her family, who migrate to work in Maharashtra's brick kilns, have run out of work, food and money due to the lockdown – and are running low on hope too

“My two eldest sons worked for two days for the patil [farm owner] and earned Rs. 150 each. They used that money to buy kanyaa from him,” said Vanita Bhoir. She opened a yellow plastic jar and took out a few rice fragments in her hand to show me. These are collected when the harvested paddy is threshed to separate the chaff, and are cheaper than the rice grain. Along with these kanyaa , there was a week’s stock of salt, chilli and turmeric powders, cooking oil and a few potatoes in 52-year-old Vanita’s straw-and mud hut. Even these had been given to the family by local social workers.

“Those who have ration cards, are given grains by the government. They also got rice for free [every month, since the lockdown started in March]. But I don’t have a ration card. What should my family do?” asks 55-year-old Navsu Bhoir, Vanita’s husband. “The government doesn’t help me. Our work has also stopped. What do we eat?”

Navsu never applied for a ration card because, he says, “We migrate every year in search of work. I don’t know how to apply for it.” He is uneducated; three of his and Vanita’s children have, over time, dropped out of school – Anand, 18 and Shiva, 12 after Class 3, and Ramdas, 16, after Class 4. Their two younger children are in school – Krishna, 8, in Class 2 and the youngest, Sangeeta, 4, goes to the local anganwadi .

The Bhoir family lives in Boranda, a village around 20 kilometres from Vada town in Palghar district. They live in a cluster of roughly eight huts of the Katkari Adivasi community.

In November last year, the family of labourers migrated to Bhiwandi taluka to work at the brick kilns there. Work at a kiln means slogging through the day and night. Once a week, with Rs. 400-500 as kharchi (expenses) from the kiln owner, they used to buy rations and other essentials. At the end of the work months at the kiln, when their wages are calculated, these expenses are deducted from their total earnings. If the family does not have any debts, they get about Rs. 10,000-12,000 in hand after working for seven months, from November to May. 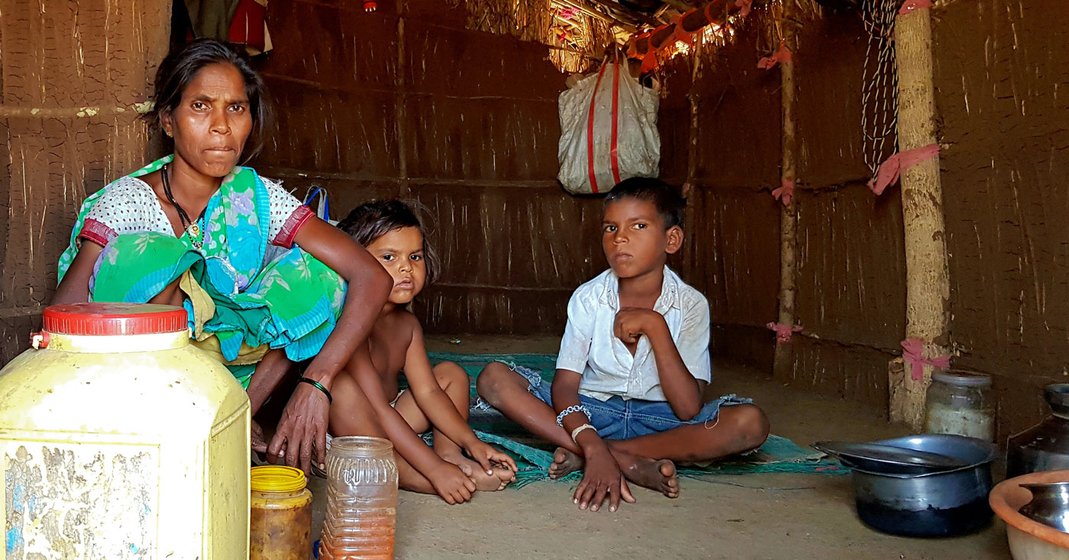 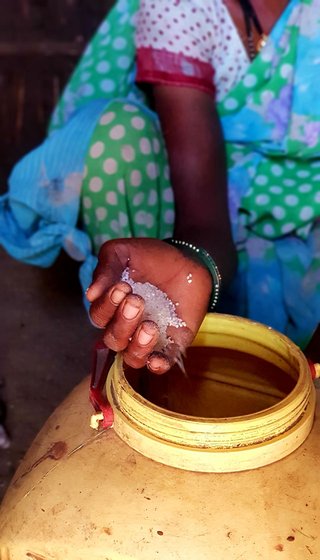 They use this money to buy provisions for the monsoon months. Some amount is also needed for house repairs. And there are expenses for the children’s education. This is how it is all the time.  But if there are ‘major’ unpaid loans, they don’t get even a rupee in hand. Instead, there is more debt to be borne – to survive through the next few months, they have to borrow again from the brick kiln owner.  To repay all this, they have no choice but to migrate the next time around and work for the same moneylender.

The work that goes on till May each year stopped in March this year because of Covid-19. Vanita, Navsu and their children returned home. “The money we earn in the early months of work [at the kiln] is spent on the weekly expenses. The income from the later months gives us some money in hand. But this year, the work stopped earlier and the sheth gave us just Rs. 2,000 when we left.  How long will that last? Nothing is left of it now. We repaired the hut – it has a roof covered with plastic to keep away rainwater – after we returned. Some money went on the travel [back to the village by tempo],” Vanita explains, quietly.

When they were leaving the kiln at the end March to return to Boranda, the contractor had not calculated all their earnings and expenses. So they don’t really know how much they earned and what amount is due to them. And Vanita and Navsu are worried – they have to provide for their family of seven – husband and wife and five children. They are landless labourers who barely subsist, and have no alternative but to keep looking for work. But during this period what work do they do – that is the worry confronting the Bhoir family.

Agricultural labour in and around their village is sparse – farmers have small plots of land and can offer at most two weeks of work during the sowing and harvesting periods, for a daily wage for Rs. 150. At times, if someone needs firewood fetched from the forest, the Bhoirs and others might hope to earn another Rs. 150. If they are lucky, they will find work at nearby construction sites for Rs. 250 a day – but only sometimes. 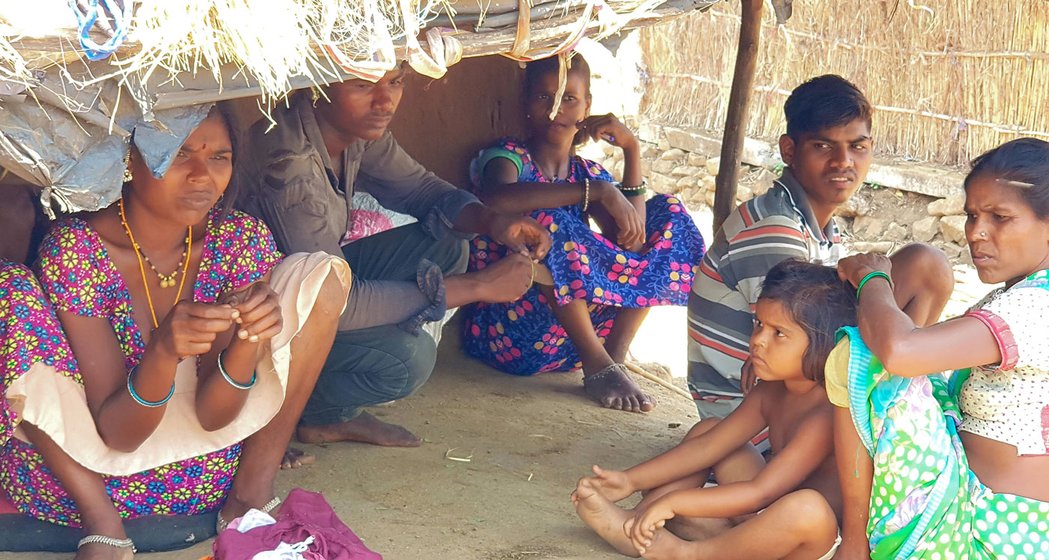 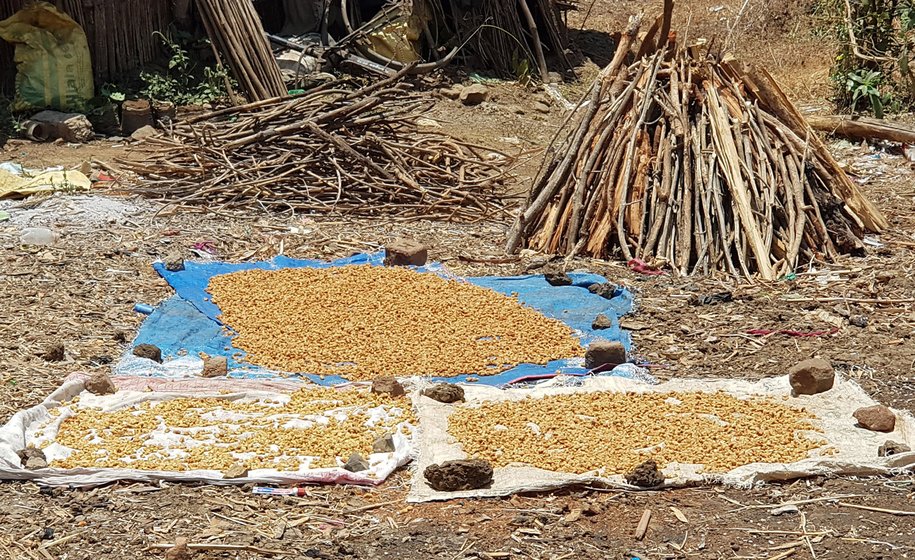 In Boranda, a group sat talking about the present situation. The annual market, where some of the Katkaris sell mahua (right), was cancelled due to the lockdown

Usually, in times of crisis, families like theirs take a loan from the sheth . But this year, all the brick kiln owners had told them that payment would be made only for work done. So even their hopes of getting a loan sank.

In Boranda, in front of some of the huts, during one of my visits, some 8 to 10 women and men sat on a low platform outside the huts, chatting. It was around 2 in the afternoon. “The government gave rice to many families [after the lockdown]. We heard they also sent Rs. 2000 to their bank accounts. That’s what people tell us. But we will have to go to Kharivli village for that [to the nearest bank, around four kms from Boranda]. And there’s this disease. What to do? How can we go out there? There isn’t even any transport,” 65-year-old Baiji Bhoir, who lives next door to Vanita, was telling the others sitting with her.

Outside some of the huts, mahua flowers were spread out to dry on the ground that day. What will they do with these dried mahua flowers, I had asked. “Before the rainy season, the uroos is held. We will sell these flowers and buy onions-potatoes with the money we get,” a woman replied.

The uroos is a large market that runs for 10-12 days in the month of May, before the start of the monsoon. This year, the uroos was not held due to the lockdown and fear of the spread of Covid-19.

In other years, on sale here are food grains, masala , onions, potatoes, fish, household plastic items and more. People from many villages gather for this market in Kudus town in Vada taluka – around 35 kilometres from Boranda. Adivasi families sell mahua flowers and dinka (natural gum) here and buy a few essential items to last the monsoon season, when it’s not possible to get much work. They see those days through on these stocked grains.

Vanita and Navsu had held on to the same hope this year – of managing the next few months with stocked provisions. But the grains in their hut are nearly over.

Mamta Pared (1998-2022) was a journalist and a 2018 PARI intern. She had a Master’s degree in Journalism and Mass Communication from Abasaheb Garware College, Pune. She reported on Adivasi lives, particularly of her Warli community, their livelihoods and struggles.