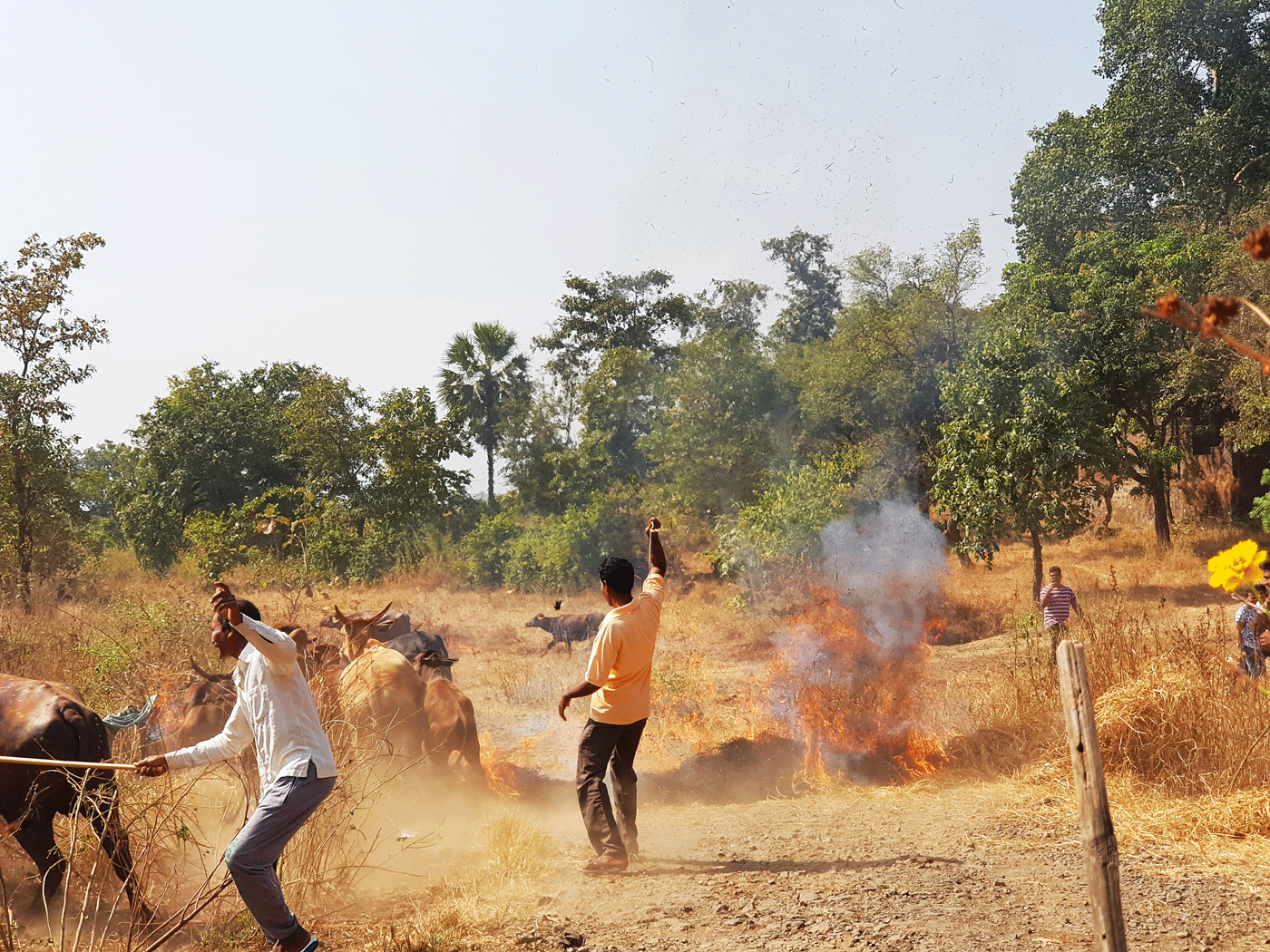 Recalling a recent Diwali in a Warli hamlet

Away from the fireworks and city lights, in an Adivasi pada just outside Mumbai, my family celebrated Diwali this year like they do every year, with traditional delicacies, community rituals, reverence of nature, and joy

At the foot of the Saprya hill in Nimbavali village of Thane district, around 95 kilometres from central Mumbai, is our Garelpada. This small hamlet of the Warli Adivasis has only a handful of houses, around 20-25.

Like every year, this year too, the pada celebrated the festival of Diwali in its own traditional way. Early this month, everyone became busy preparing for the festival.

Waghbarsi, Barki Tiwli, Mothi Tiwli and Balipratipada are the four important days of Diwali for our community. We celebrated these from November 5 to 8 this year.

The Warlis regard the tiger as a god, and on Waghbarsi, we pray to the tiger. Adivasi padas are usually situated in the forest. In the past, the Warlis were completely dependent on the forest for survival. They would take their livestock for grazing in the jungle, as many still do. They prayed to the tiger to not attack them – and out of fear came reverence. 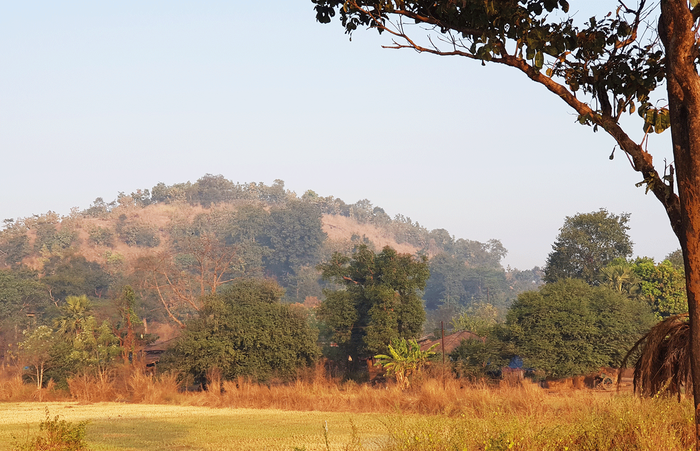 At the foot of the Saprya hill in Nimbavali village of Thane district, around 95 kilometres from central Mumbai, is our Garelpada. This year too, the pada celebrated Diwali in its own traditional way

In the Gaodevi temple, there is a wooden plank with a tiger engraved on it in the centre. Villagers break coconuts, light incense sticks and a lamp here to worship their god. At some distance in the forest near the pada , a large stone smeared with vermilion paste is our Vaghaya (tiger) shrine.

On the day of Barki Tiwli (‘small lamp’), my mother Pramila gathers some chiroti from the forest. My mother is 46-years-old; she worked in the brick kilns, and would make and sell wine made from dark jaggery, but now farms on our plot of forest land. She cuts the wild fruit – chiroti is from the cucumber family, but smaller and bitter – in halves and scoops out the insides to create a small bowl to use as a lamp.

Cow dung and mud are mixed to make a round, hollow holder for the lamp called a bowala , moulded on to a wall at some height. The holder is decorated with marigold flowers. In the evening, the lamp is placed in this bowal a and lit. Since it is placed high up, the lamp lights up the whole place. 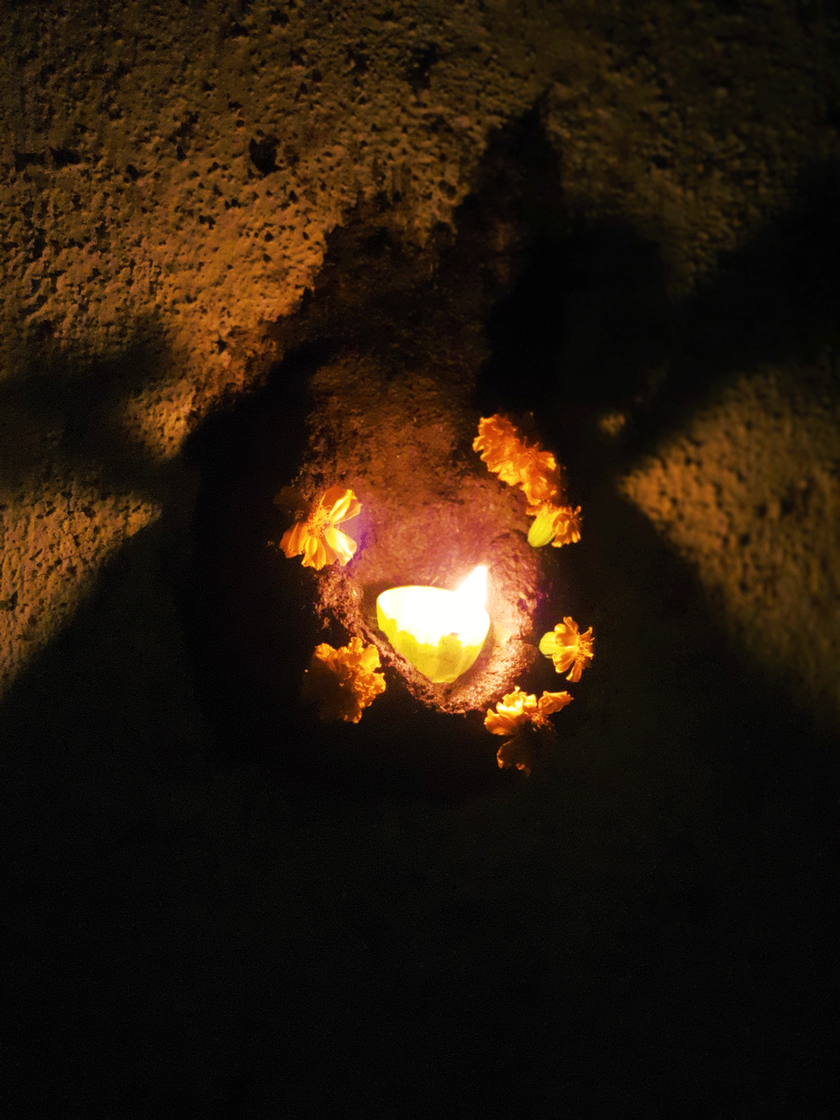 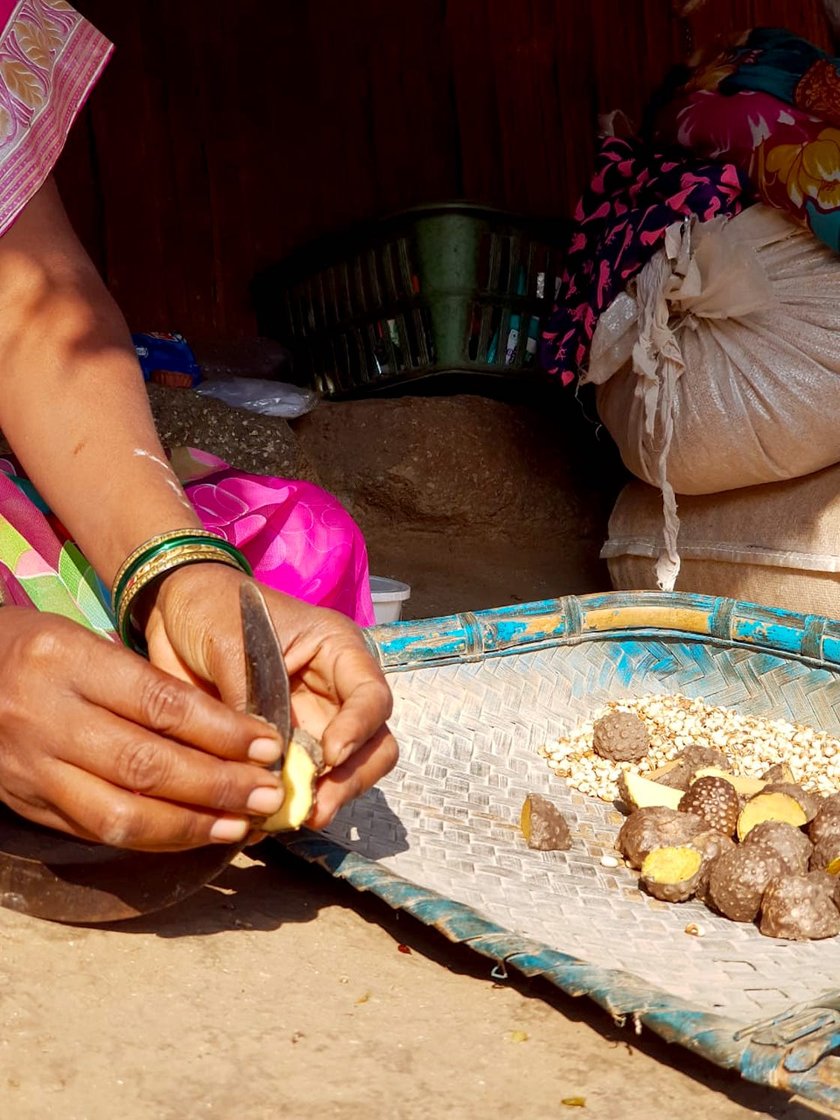 Left: On the day Barki Tiwli, a lamp made from a scooped-out bowl of a wild fruit is placed in a mud and dung bowala on the wall. Right: Karande, harvested from our fields, is one of the much-awaited delicacies

In the past, all houses in our pada were made of karavi sticks and wood. The roof was also thatched. At that time, the dung bowala would protect the hut from catching fire. (Around the year 2010, families in our hamlet started building cement and brick houses under the Indira Awaas Yojana.)

On both Barki and Mothi Tiwli (‘big lamp’), lamps adorn the front walls of the houses in the hamlet. On both these nights, the light from the tiwli s wards off darkness in the pada – in the cattle shed, in the shenkai (the cow dung store) and on the ledge of the community well – everywhere, flames  are seen swaying by the breeze.

On Balipratipada, the festivities begin at dawn. It used to be the day of the ‘ damb ’ prank, where a lit beedi was used to (harmlessly) singe unsuspecting family members. “Everyone must rise early, finish bathing quickly. A damb was delivered to wake sleeping people up,” says Ram Pared. He is my uncle, 42-years old. His family used to work on the brick kilns; now he is a contract labourer and during the monsoons he farms on the forest land. 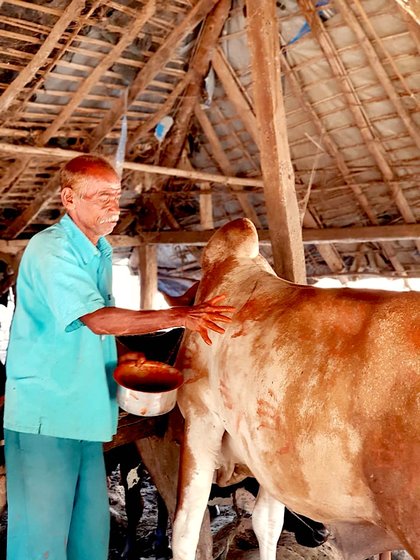 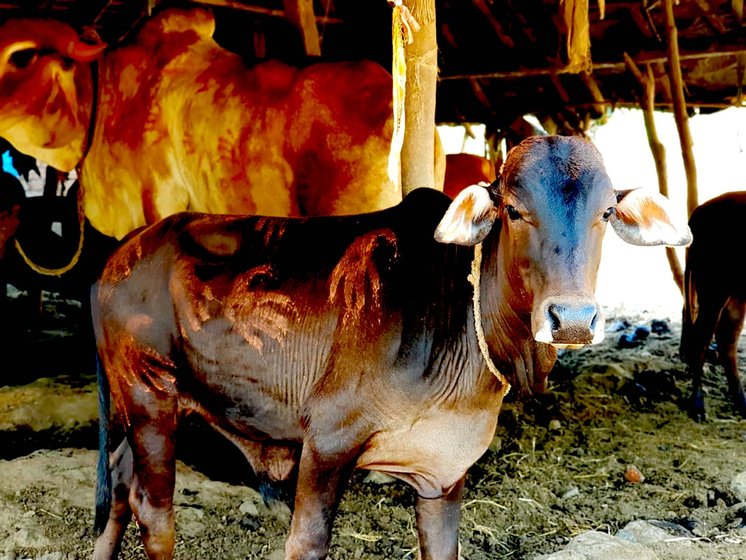 On Balipratipada, our cattle are decorated and offered prayers. 'This is an Adivasi tradition', says 70-year-old Ashok Kaka Garel (left)

On Balipratipada, everyone’s front yards are coated in a thin layer of cow dung and the cattle sheds are cleaned. All our livestock are decorated and worshipped. “This is an Adivasi tradition,” says Ashok Kaka Garel, around 70 years old, and a cattle herder, his hand dipped in a thin solution of geru mud with rice starch. This reddish-brown colour is used to decorate the animals with palm prints. Their horns are also coloured with the same paste.

While the men in the pada are busy decorating cattle, the women are engrossed in making food specially cooked during Diwali. Panmodi , chawli and karande are the much-awaited delicacies. These are all made using ingredients the Adivasis have grown themselves.

“The newly harvested paddy from our small plots is ground to make a fine powder. To this we add grated cucumber and some jaggery. This dough is then placed between a folded chai leaf and steamed,” my mother Pramila explains the process of making panmodi . “And while this is being prepared, the house must not be swept. Or else the panmodi will never get cooked!” 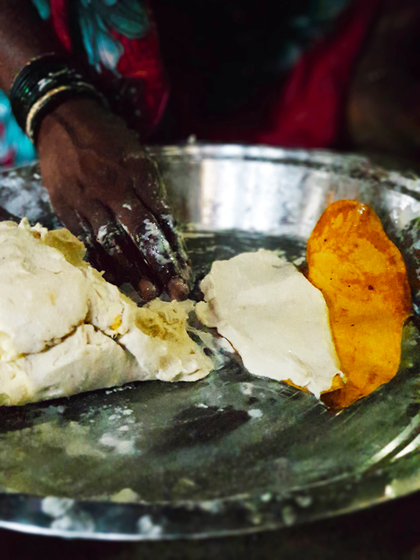 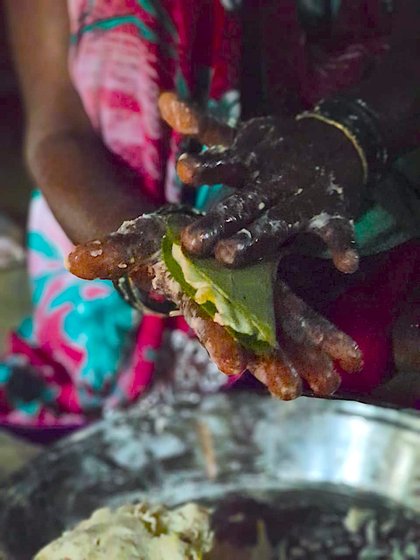 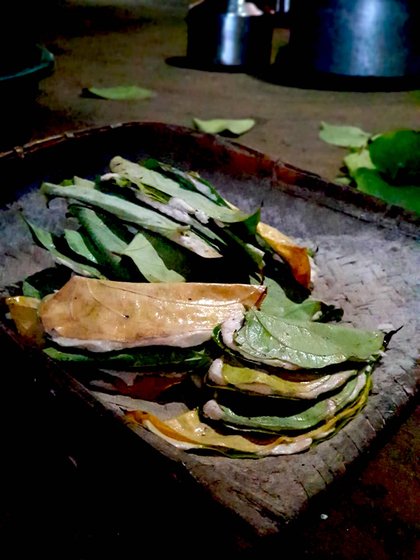 The delicious pandmodi is made from a dough of rice from our fields, grated cucumbur and jaggery, placed between a folded chai leaf and steamed

To sow the karande , a small, flat mound of soil is created during the monsoons.  The new karande grow on creepers by Diwali time. Some are dark, others are white, some are round, others are uneven. They taste like potatoes. And in a part of the forest plots, dry leaves, hay and dry dung cakes are lit to make the area ready for cultivating chawli . The land is ploughed and chawli (black-eyed beans), which we call chawla , is sown there. On Balipratipada, diced karande and chawla are boiled in water with some salt.

After they are done with cooking, the women turn to the cattle sheds. Stalks of paddy, a pestle, an iron rod used for digging and some marigold flowers are kept outside. As soon as the cattle step out, the chiroti fruits are thrown under their feet. It is said that the seeds of a chiroti that has been crushed under the hooves of the cattle will bear sweet fruit.

Cattle are integral to farming; they toil alongside farmers to bring the harvest home. This, the Warlis believe, prompts evildoers to curse their cattle. To ward off evil, the Adivasis perform an ‘ agni puja’ or fire ritual where all livestock in the hamlet – cows, bullocks, buffalos and goats – are rapidly led to step through a 'wall' of fire lit by the community using paddy straw. 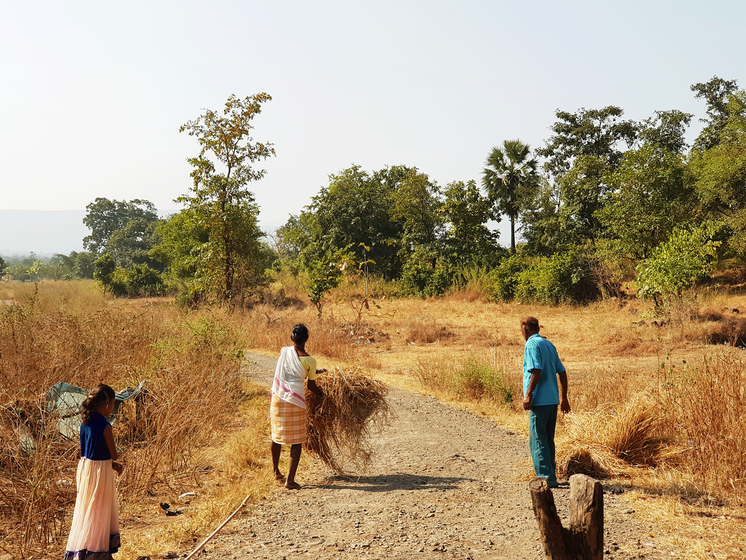 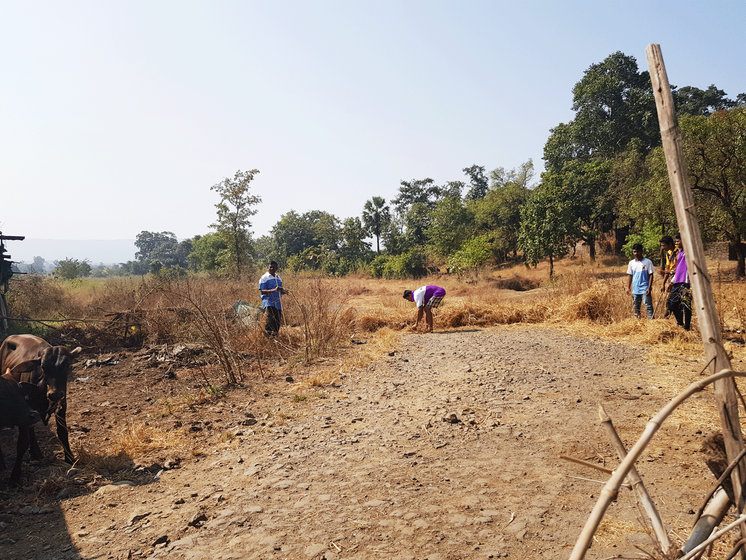 During Diwali, the Warlis also perform a fire ritual where all livestock in the hamlet are rapidly led to step through a paddy-straw fire lit by the community

On this day, the Warlis worship their gods – Vaghaya (tiger), Hirva (greenery), Himaai (the mountain goddess), Kansari (grains), Narandev (the protector) and Chedoba (the god who safeguards from evil). Marigold flowers are first sacralised and then offered to the gods along with the chawla, karande and panmodi . From this time onwards, many Warli women may wear marigold flowers in their hair till the monsoons set in. After that, marigold flowers will not be used for praying or adornment until the next Diwali.

Adivasis toil in their small forest plots all monsoon. They work hard to cultivate even in the rocky terrain of the hills. By the time of Diwali, the crops – rice, urad , jowar and others -- are ready to be harvested. If, by the grace of nature, the yield is good, some families even manage to get a bit of an extra income by selling their produce. And in this joy, the Adiviasis celebrate Diwali. Only after they have worshipped the new harvest, they begin eating.

But after the monsoons are over, there is no work in the fields. It’s time to think about new ways to sustain themselves. Some turn to the brick kilns in nearby villages, or go to construction sites in Mumbai’s northern suburbs, others go off to  stone quarries and the sugar belt to toil for the next few months.

Translated from Marathi by Samyukta Shastri.