With uncertain weather, water scarcity and blight, my Kaka and Kaki, who live in our Warli hamlet in Palghar district, are struggling to grow vegetables – their only source of livelihood – on their hillside farmland

“It rained quite a lot this year. So I thought the water from the stream would last longer. I told my husband to stay back in the village. We could cultivate some more vegetables. Working on our own farm is much better than migrating for labour. But see what happened,” Jayashree Pared, my Kaki – my father’s brother’s wife – was telling me, looking at the cloudy skies. It was November 2019. “Winter has arrived, but there is no chill in the air. The monsoon is over, but the sky has yet not cleared. And my methi is on the verge of dying, so is the palak . The mustard was okay till yesterday, but today it too has bugs. What do we do?” Kaki was busy pulling out the infested plants while speaking to me.

“The weather has changed. We don’t get enough sunny days. That has caused all this [the infestation]. The shopkeeper selling these chemicals [pesticides] also says this. I am sure he knows a lot about this?” she said, looking for my nod. She was worried that the blight will spread all over their piece of land and all the vegetables will wilt. “I could have earned Rs. 200-250 by selling vegetables from this one muddy patch. But most of it died while sprouting. Now even what is growing is dying. I have a lot of tension because I can’t tell how much I will earn from this. The ghevda and waal were flowering, but then all the flowers wilted and fell off. The beans too are infested,” Kaki continued.

She sells the vegetables sitting by the streetside, after carrying them in baskets on her head for two kilometres to Ganeshpuri, or sometimes takes a bus to the markets at Vasai; this fetches my uncle and aunt around Rs. 1,000 a week, at most. That’s their only source of income. 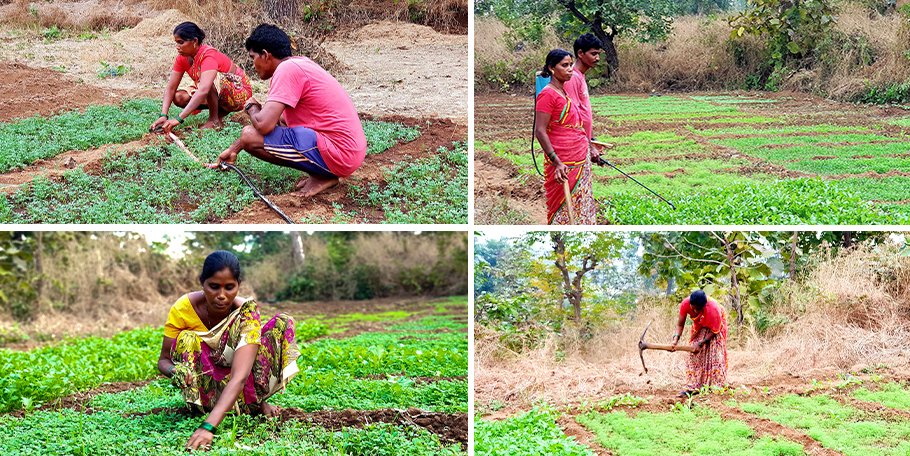 Jayashree and Ramchandra Pared grow vegetables and paddy; with the land title they received under the FRA, they no longer have to migrate to the brick kilns

Kaki, 40 years old, and Kaka, my uncle Ramchandra, who is 43, own one acre on a hill slope near Garelpada in Nimbavali village. Most of the families in this hamlet of around 85 houses in Vada taluka (also listed as Wada) of Palghar district in Maharashtra, like my aunt and uncle, are Adivasis; they belong to the Warli community. Most of them work at nearby brick kilns, on construction sites or in the factories of Vasai and Bhiwandi, and cultivate small plots of land.

We too own some land on the hill, an acre. In the monsoon, our families together cultivate paddy. This we don’t sell in the market; it’s for our own meals. We also cultivate other crops like cucumber, ridge gourd, karande , long beans, jowar , sesame, Niger seeds and yam. On the hill are various types of trees, among them jamun , aalav , koshimb and toran , which all bear wild fruits and berries. A lot of wild vegetables also grow here during the rains.

A stream flows by our land. Once the monsoon is over, Kaka and Kaki grow vegetables using water accumulated in a trench in one part of the stream. When that dries up, with a shovel and spade, they dig 5 to 6 feet deep, both working for a few hours on this every day for four days, to dig a ditch and collect some water. 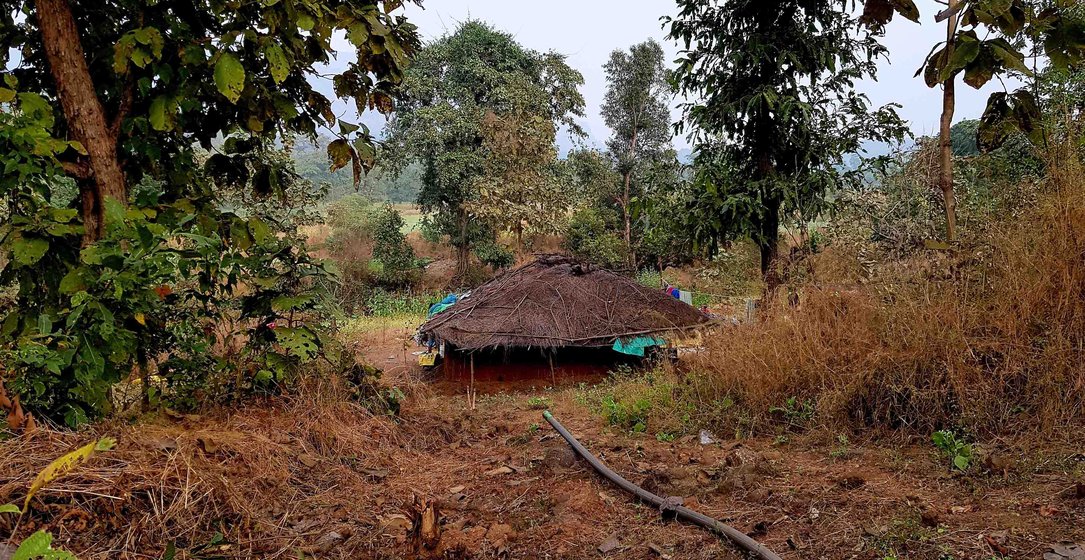 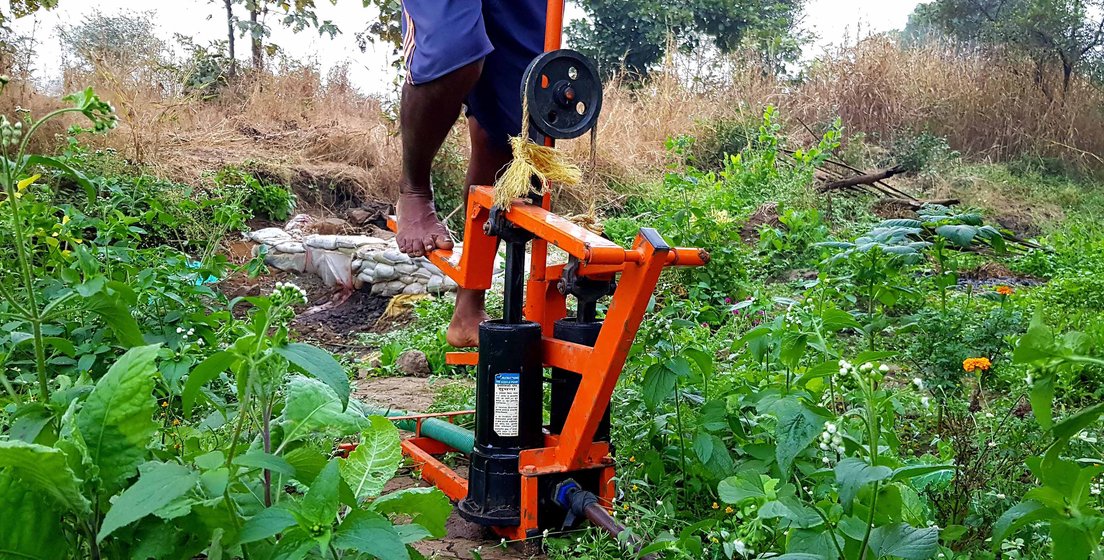 Left: 'We have not evengot permission to construct a house on the plot'. Right: The plot is uphill, near their old house, so a paddle machine that lifts water eases their labour

“We wanted to dig a bigger trench by hiring a JCB [for Rs. 1,800 for the two hours the machine will have to run]. But the forest department does not allow this. The land, they say, can only be used for cultivation, not for digging wells or constructing a house. We made two visits to the local forest department office but could not meet the main officer. We met another official who told us to keep digging with our own hands. This will take a long time. We have to do all the other field work too,” says Kaka.
He and Kaki have tried to stop the flow of water and store it by creating a bund using plastic sacks filled with mud. “When we built this in October on this stream, we thought the water will last long. But see, it is almost over now,” says Kaka. In the past, Kaka-Kaki would carry water in various containers to their patch on land on the hill slope; some months ago, a local NGO gave them a foot paddle-operated machine, which lifts water uphill. That has eased their labour somewhat, but the water remains scanty.

“We have not even got permission to construct a house on the plot,” Kaka continued. “Soon, a highway [the Mumbai-Vadodara Express Highway] will pass through our village and our house will be demolished [eviction notices were served in 2018 to all families in the hamlet]. We will be relocated. But we do not know where. Whatever we have is here. So I wanted to re-build my home here. I requested the officer. But he refused. He said build a hut to live in.”

Kaka and Kaki need a steady water source for farming. If they can get water and the scarcity decreases, they won’t be forced to migrate again

Watch video: ‘How do we survive'

Though Kaka got the title to the one-acre in 2011 under the Forest Rights Act , he and his family are being deprived of the right to habitation in the forest land, that the Act promises. And he and Kaki need a steady water source for farming. If they can get that, if the water scarcity does not grow, they won’t be forced to migrate again.

While busy at work, Kaka told me of the many years he laboured at brick kilns near our village. Kaki never went to school, her education was zero. Kaka did not clear Class 10. It so happened that just as the exams were to start Kaka was hit by a bull. He was confined to bed for many days. He could not sit up or stand on his feet. And so he could not appear for the board exam. His dream of getting an education remained incomplete.

Some time after Kaka got married at the age of 22 – Kaki was 19, and from Thalyachapada hamlet in Vasai taluka – their first child, Archana, got very sick. They don’t know what the illness was and tried all kinds of medicine, but nothing worked. Finally, they consulted a bhagat (a local traditional healer). They tell me he cured her. The bhagat asked them to sacrifice a goat. But where was the money? Kaka said that they thought about it day and night. Finally, they asked a relative. He gave them Rs. 1,200 for the animal sacrifice. When it was time to repay the money, he started asking. Kaka and Kaki wondered how to repay that loan, they did not have even that amount. That is when they took an advance from the brick kiln owner, paid back the relative’s loan, and migrated to the kilns. 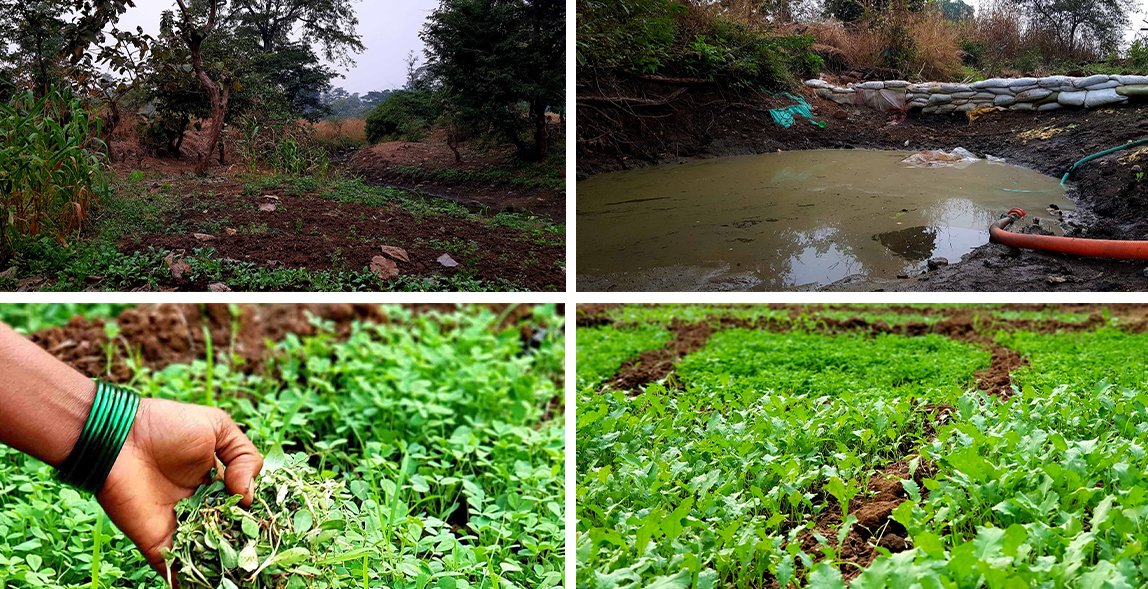 Top row: The stream that flows by their land has a trench at one end to store water. It is created by a bund made from sacks. Bottom row: Methi and palak are some of the vegetables that the Pared family cultivates

“It was the first time in my life that I went to a brick kiln, because of these circumstances,” said Kaki. This was in the year 2001. “I continued working at the kiln for many years. But now I can’t bear it. My back hurts. My lower back is painful. I don’t think I can do that work anymore.”

Kaka-Kaki have three children. The elder daughter, 20-year-old Archana, has passed the Class 12 board exams and has learnt sewing-tailoring, 18-year-old Yogita is in Class 12 now, and their son, 16-year-old Rohit, is in Class 10. Both of them are at tribal ashamshalas (hostels). Kaka and Kaki feed their family by working on their farm. They have led difficult lives – and their children should not have to spend their days in the same way. That is their dream.

Without much of an education, Kaka could not find any other work but hard labour. And he does not have any skill that will fetch an income. The plot he received under the FRA is all that the family has. With a steady water supply, they could perhaps develop their land, and with enough work and income, lead a content life. That is what they hope for.