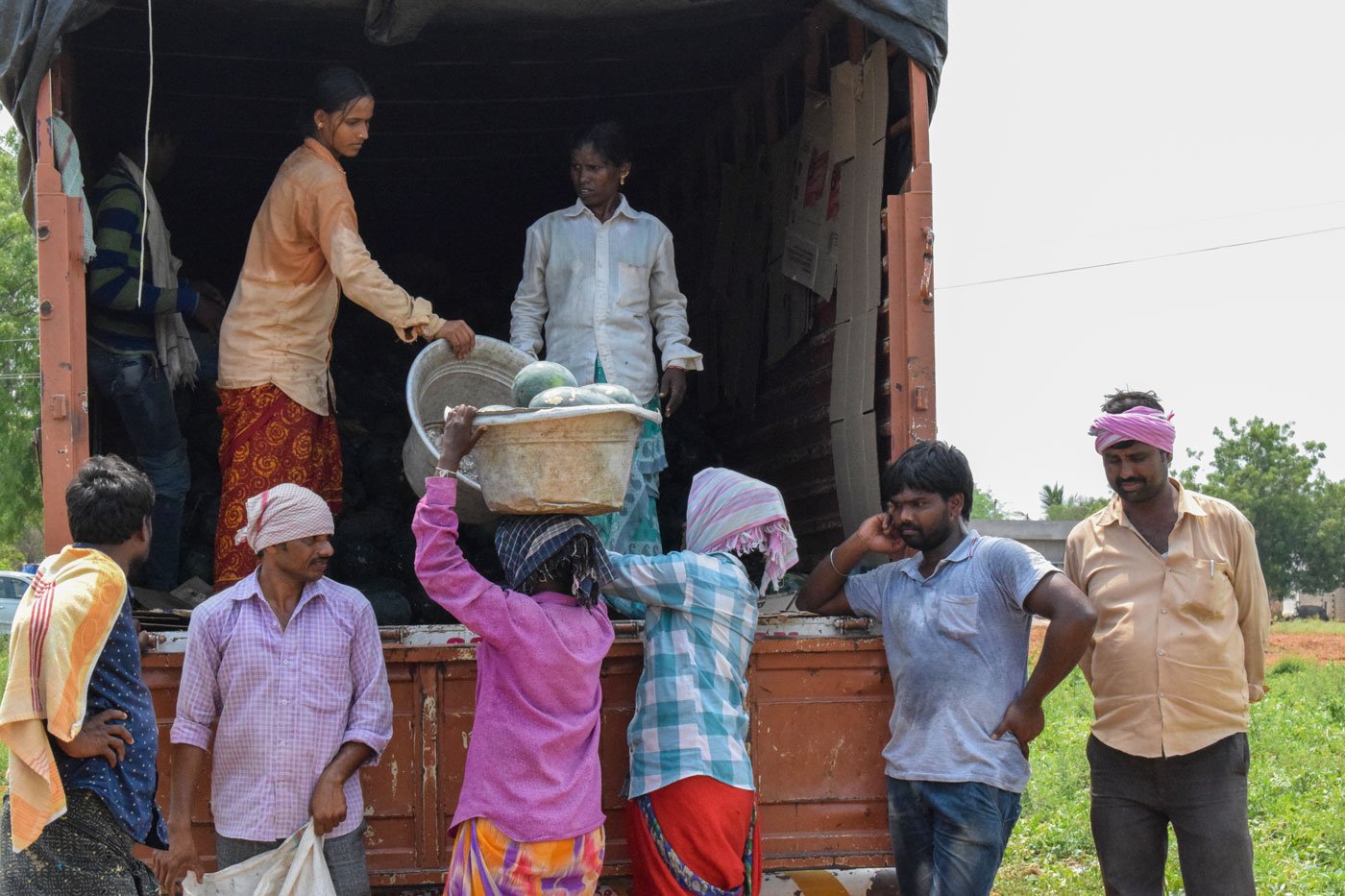 Watermelon farmers: left with no juice

Even before the Covid-19 crisis, watermelon cultivation in Telangana was risky, with high inputs and falling rates – and now, with the lockdown, farmers, labourers and traders are facing a bleak season

Gudapuri Balaraju removes the rear seat in his autorickshaw and loads the vehicle with around 700 kilos of watermelons. He has just purchased them from a farmer in Vellidandupadu hamlet of Koppole village, around 30 kilometres from his own village, Vempahad.

He then drives around to various villages in Nidamanur mandal in Nalgonda district, and manages to sell a few melons, weighing between 1 and 3 kilos, for Rs. 10 each. It’s an uphill sales day for Balaraju, who also ferries passengers in his autorickshaw when he is not selling fruit. The villagers are reluctant to let him in. “Some are calling it ‘corona kaya ’ [melon],” says 28-year-old Balaraju, “They say ‘Do not come here. You are bringing the virus with the melon.”

After March 23 – when the Covid-19 lockdown started in Telangana – he has made barely Rs. 600 a day from selling the melons. Before the lockdown, he was earning nearly Rs. 1,500 a day for some weeks after the harvest. Watermelon is usually planted here by early January and harvested two months later.

With the falling sales and people’s comments, Balaraju says he does not wish to go out after he has managed to sell the batch of melons he bought on April 1. Like him, many farmers, labourers and traders involved in producing and marketing watermelons have taken a hit due to the Covid-19 crisis.

The labourers, most of them women, who pluck the fruits and load them onto truck, depend on daily wages. For loading a 10-ton truck, a group of 7-8 women earns Rs. 4,000, which is equally distributed among them. On most days, a group manages to load two trucks, sometimes three. However, as the number of trucks transporting fruits to the cities of Telangana has reduced after the lockdown, their wages too have shrunk. 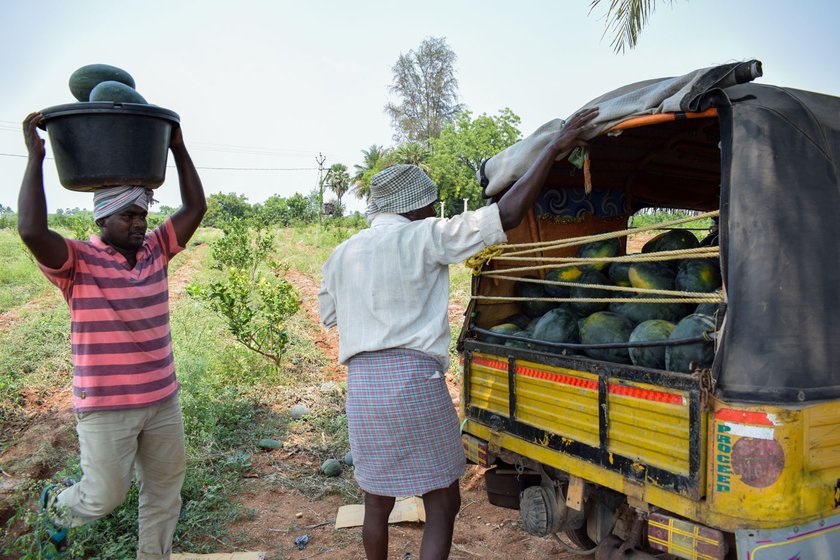 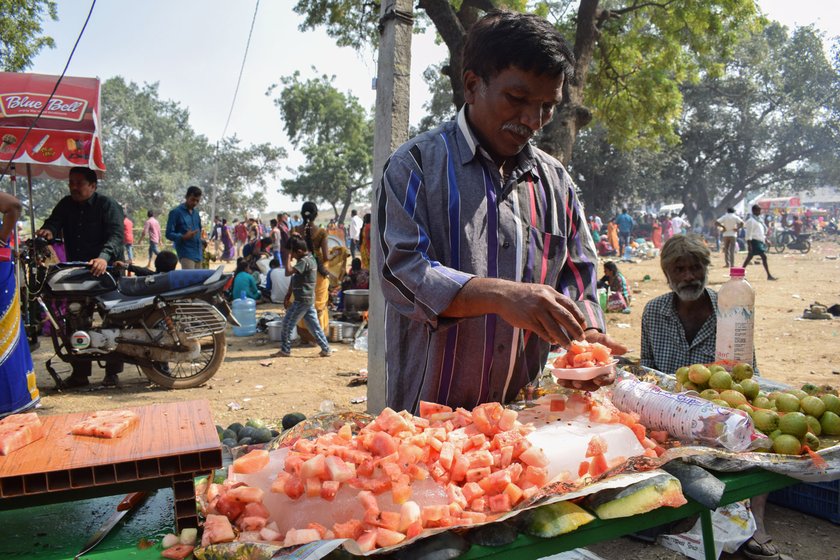 Left: 'Some are calling it ‘ corona kaya’ [melon]', says Gudapuri Balaraju, loading his autorickshaw with watermelons in Vellidandupadu hamlet. Right: The decline in the trade in watermelon, in great demand in the summers, could hit even vendors

On March 29, only 50 trucks of watermelons reached Kothapet market in eastern Hyderabad, local news reports say. Before the lockdown, every day during watermelon harvest season, 500-600 trucks would arrive at Kothapet from various districts in Telangana, particularly Nalgonda and Mahbubnagar, estimates Madhu Kumar, a trader from Miryalaguda town. Each truck carries nearly 10 tons of watermelons. “Many trucks [would] go to Chennai, Bengaluru and even Delhi,” says Kumar, who sells the melons to wholesale dealers in towns and cities.

The wholesale price of watermelons too has crashed with the lockdown. From Rs. 6,000-7,000 per ton before the lockdown, by March 27 Kumar was offering Rs. 3,000 per ton to Bollam Yadaiah, a farmer in Buddareddy Guda hamlet of Koppole village in Nalgonda’s Gurrumpode mandal . Buying at that price, he sent two trucks of fruits from Yadaiah's farm to a fruit vendor in Miryalaguda.

However, these lockdown-induced hits have only worsened the mounting losses many watermelon farmers were already facing in the state. Among them is 25-year-old Bairu Ganesh of Turka Palle village in Kangal mandal of Nalgonda district.

The watermelon Ganesh cultivates is an investment-heavy hybrid variety, which is extremely sensitive to weather and pests. The cost of cultivation per acre is around Rs. 50,000 to Rs. 60,000 for seeds, fertilisers, pesticides, ploughing, weeding, mulching and so on. In the summer of 2019, Ganesh made a profit of roughly Rs. 150,000 – selling the melons for around Rs 10,000 a ton. 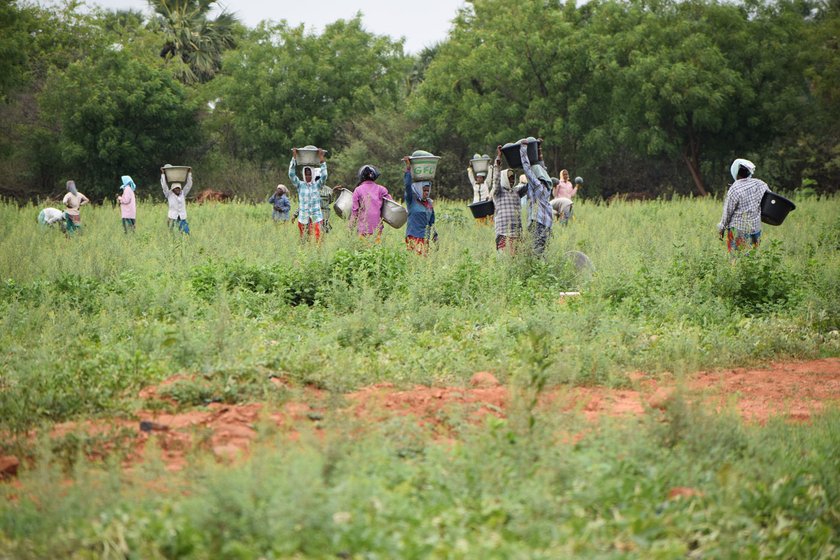 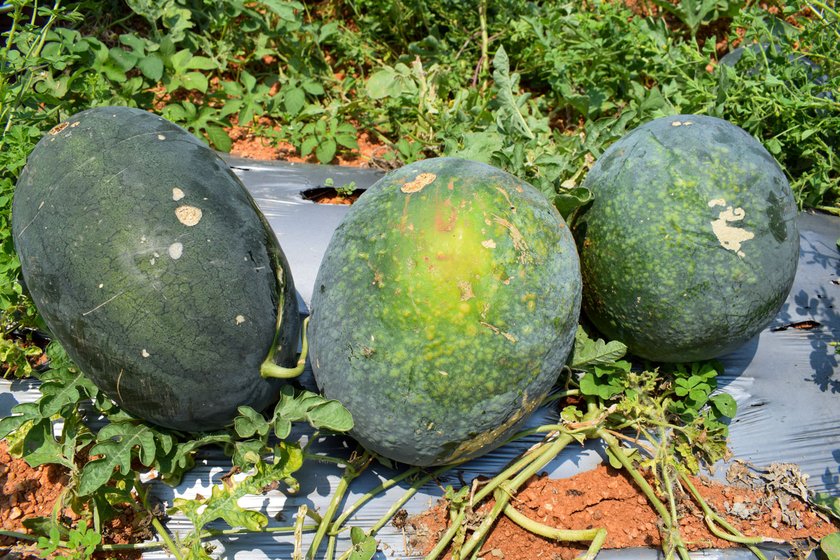 Left: The number of trucks taking watermelon to the cities of Telangana has reduced, so the wages of labourers who load the fruit have shrunk too. Right: Only the perfectly smooth and green melons are being picked up by traders; the others are sold at discounted rates or discarded

Ganesh was hopeful of similar profits this year too, and leased nine acres to cultivate the crop in three phases between March and June. One acre usually yields around 15 tons of watermelons. Of this, on average, 10 tons are perfectly shaped, smooth, of even size and weight, with no scratches. These are sent to cities and large towns by traders like Madhu Kumar. Part-time fruit-vendors like Balaraju (who loads the fruit in his autorickshaw) sell the ‘leftovers’ in small towns and villages, purchasing the melons at discount rates from the farmers.

Cultivating watermelon consecutively for a second time in a same plot reduces the average yield to seven tonnes – and with a third crop, it falls even further. If the fruits are not harvested between the 60th and 65th day after sowing, the entire produce turns overripe. And if either pesticides or fertilisers are not used repeatedly and exactly on time, then the fruit does not acquire that much-needed perfect shape, size and weight.

Those pesticides and fertilisers can be bought only if the farmer can pay the entire amount in cash. “Nobody gives these items on credit for watermelon. They give it for sweet lime and paddy. They know the risk involved [in watermelon],” says Chintala Yadamma, who started cultivating watermelons in 2019 in Turka Palle village. “It is easier to borrow money from elsewhere,” she adds, referring to high-interest loans from private moneylenders.

And even before the lockdown, prices were already falling, farmers here say, because of an increase in the cultivation of watermelons. Price fixing by traders, in a position to drive hard bargains due to the excessive supply, the farmers allege, was also a reason for the already low prices in early March.

Many farmers I spoke to compared producing watermelons to a gamble, to ‘playing cards’. But these risks did not stop many of them from cultivating the crop – everyone was hoping the harvest this year would work in their favor. 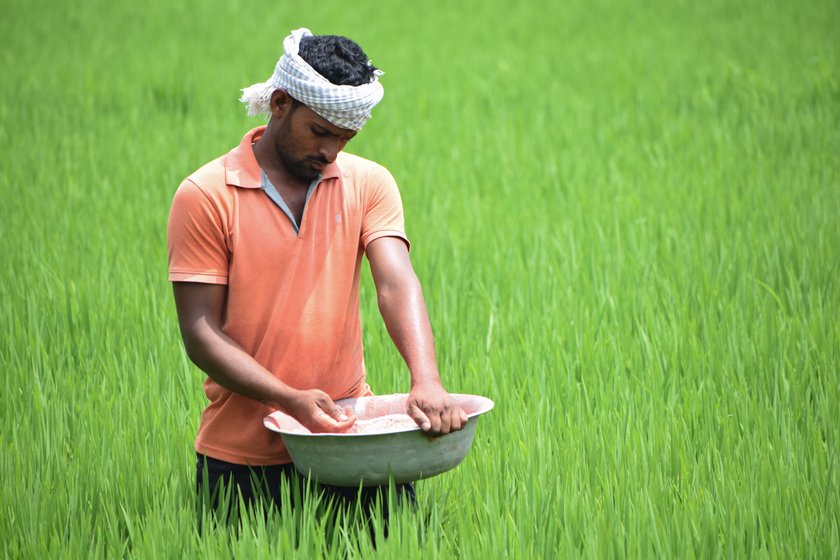 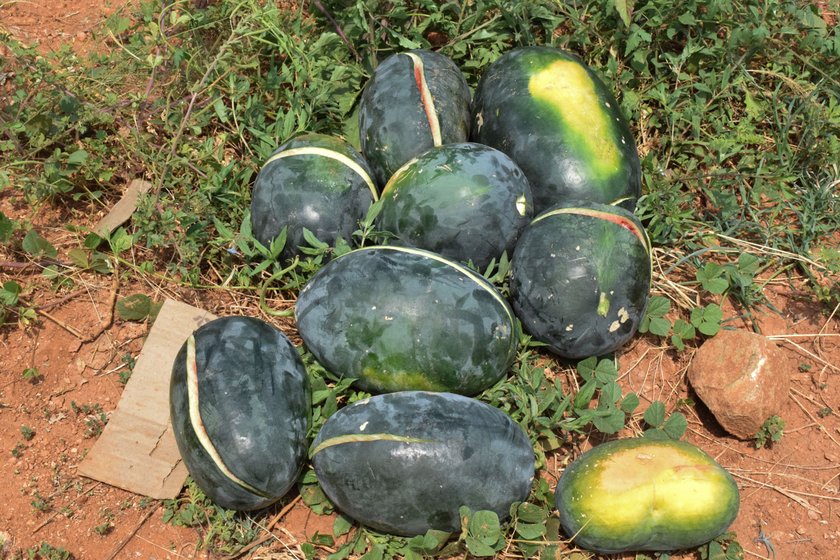 Left: Bairu Ganesh delayed harvesting his first three-acre crop by around a week – hoping for a better price. Right: The investment-heavy hybrid variety of watermelons grown in Ganesh's farm

Ganesh delayed harvesting his first three-acre crop by around a week – hoping for a better price. Plucking them and then properly storing so many tons of melons was not an option. “Around a truck-load [10 tons] fruits were not harvested [by early March],” he says, while he waited for someone to offer more than Rs. 6,000 a ton. In the meantime, his fruits over-ripened and their value dropped even more.

The trader who came to pick up his fruits in the first week of March discarded many of the melons. Ganesh kept quiet when the first, second and third fruits were dismissed. But when the fourth one was discarded, he lost his cool and hurled a stone at the person grading the fruits in his field.

“I took care of the crop like a baby. An entire month I slept here [in the field] protecting it from foxes. How can he throw like that? He could have gently placed them on the ground. I would have sold to someone else at a lower price,” says Ganesh. Reluctantly, he sold his ‘perfect’ fruits to that trader, and sold the ‘leftovers’ to vendors like Balaraju.

All this happened before the Covid-19 lockdown.

“Around 5,000 acres [of watermelons] will be cultivated in Nalgonda this year,” estimated Shankar, salesman of a seeds company, when I spoke to him in the first week of March in Vellidandupadu hamlet. If the price now continues to be Rs. 3,000 per ton, the amount at which Madhu Kumar bought the fruit from Bollam Yadaiah in Buddareddy Guda hamlet, farmers new to watermelon cultivation could lose around Rs. 20,000 per acre. Ganesh estimates a loss of at least Rs. 30,000 from his first three acres. He and the other farmers, in an even more vulnerable position due to the lockdown, simply can’t afford to negotiate a better price. 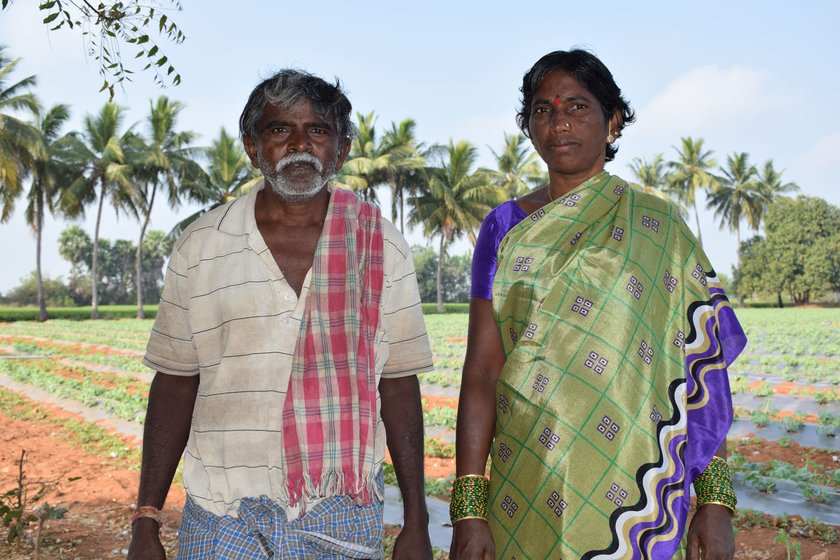 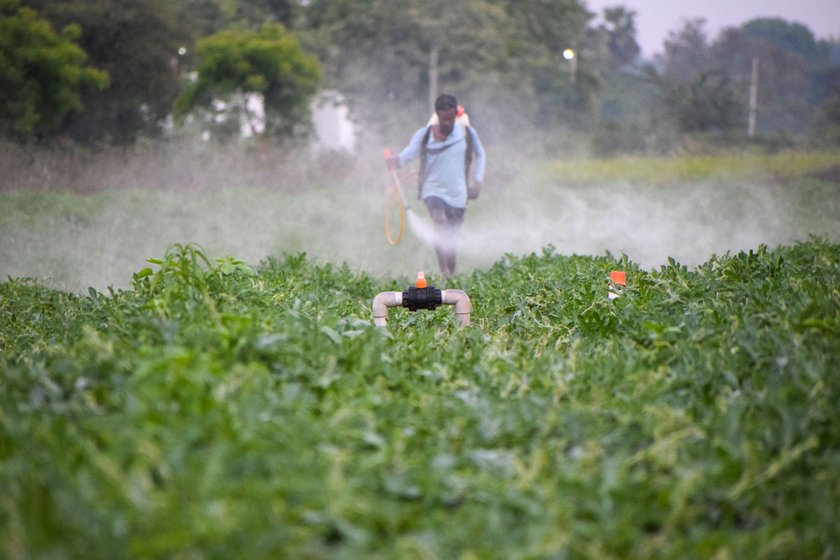 Left: Chintala Yadamma and her husband Chintala Peddulu with their watermelon crop. Right: 'How can I leave it now? I have invested Rs. 150,000 so far', says Bommu Saidulu, who was spraying insecticide in his three-acre crop when I met him

Besides, in this trade, the traders sometimes pay the farmers only after the fruits are sold in the market – and this practice of deferred payments is more widespread during the lockdown period, adding to the uncertainty.

Still, despite the Covid-19 lockdown and the various setbacks, some farmers are confident that the demand as well as the price will gradually increase through the summer months.

In an attempt to cut costs, many have stopped adding fertilisers – melons require these at regular intervals – but are continuing with pesticide-spraying and watering of the crop, hoping for at least a modest yield of ‘imperfect’ fruit.

Some can’t purchase the fertiliser and pesticide they need, unable to traverse through the travel restrictions and access dealers, though in its first and second addendum (March 25 and March 27) to the Covid-19 lockdown guidelines, the Ministry of Home Affairs exempted shops selling seeds, fertilisers and pesticides.

“How can I leave the crop now? I have invested Rs. 150,000 so far,” says Bommu Saidulu of Koppole village; he was spraying insecticide on his three-acre crop when I met him on March 27.

Ganesh, too, is awaiting a harvest from his second plot at the end of April, and has prepared the third plot for sowing.