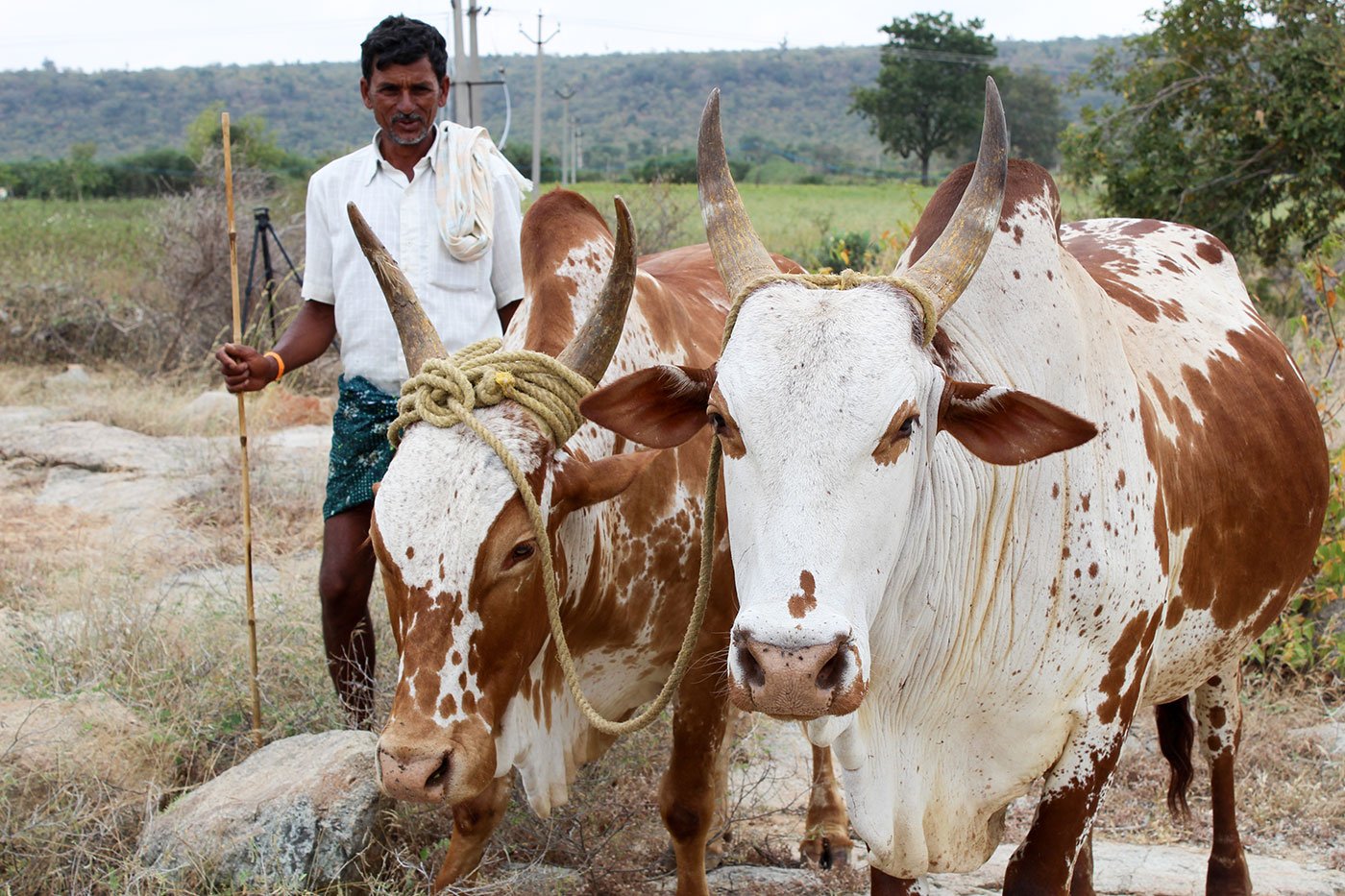 In villages near the Amrabad Tiger Reserve in Telangana, the indigenous Poda Thurupu cattle are a source of sustenance for breeder communities and farmers, and efforts are on to conserve the species

At 9 a.m., Eslavath Banya Nayak herds around 150 rugged cows across the Hyderabad-Srisailam highway near Vatwarlapalle village. They enter the Amrabad Tiger Reserve’s core zone in the Nallamala range of the Eastern Ghats, where a few cattle graze on the grass, while others try to reach the branches with tender leaves.

Nayak, 75 years old, is from the Lambadi community, and his animals – like those of many cattle breeders here – are Thurupu cattle. The Lambadi (a Scheduled Tribe), the Yadava (Golla) (an OBC) and Chenchu (a Particularly Vulnerable Tribal Group) are traditional breeders of the Thurupu. The animals have short, sharp horns and hard, strong hooves. They move easily in different kinds of terrain – on wet as well as dry stony soil, and pull heavy loads with ease. They can also survive the region’s heat with little water for long periods of time.

Since Amrabad sub-district is to the east of the villages on the Telangana-Karnataka border, from where many farmers come to buy these cows, and because the cattle have spots, people here call them 'Poda Thurupu' – in Telugu, ' poda ' means spot and ' thurupu ' mean the East. The Poda Thurupu are of great help to small and marginal farmers who cannot afford tractors and other farm machinery. 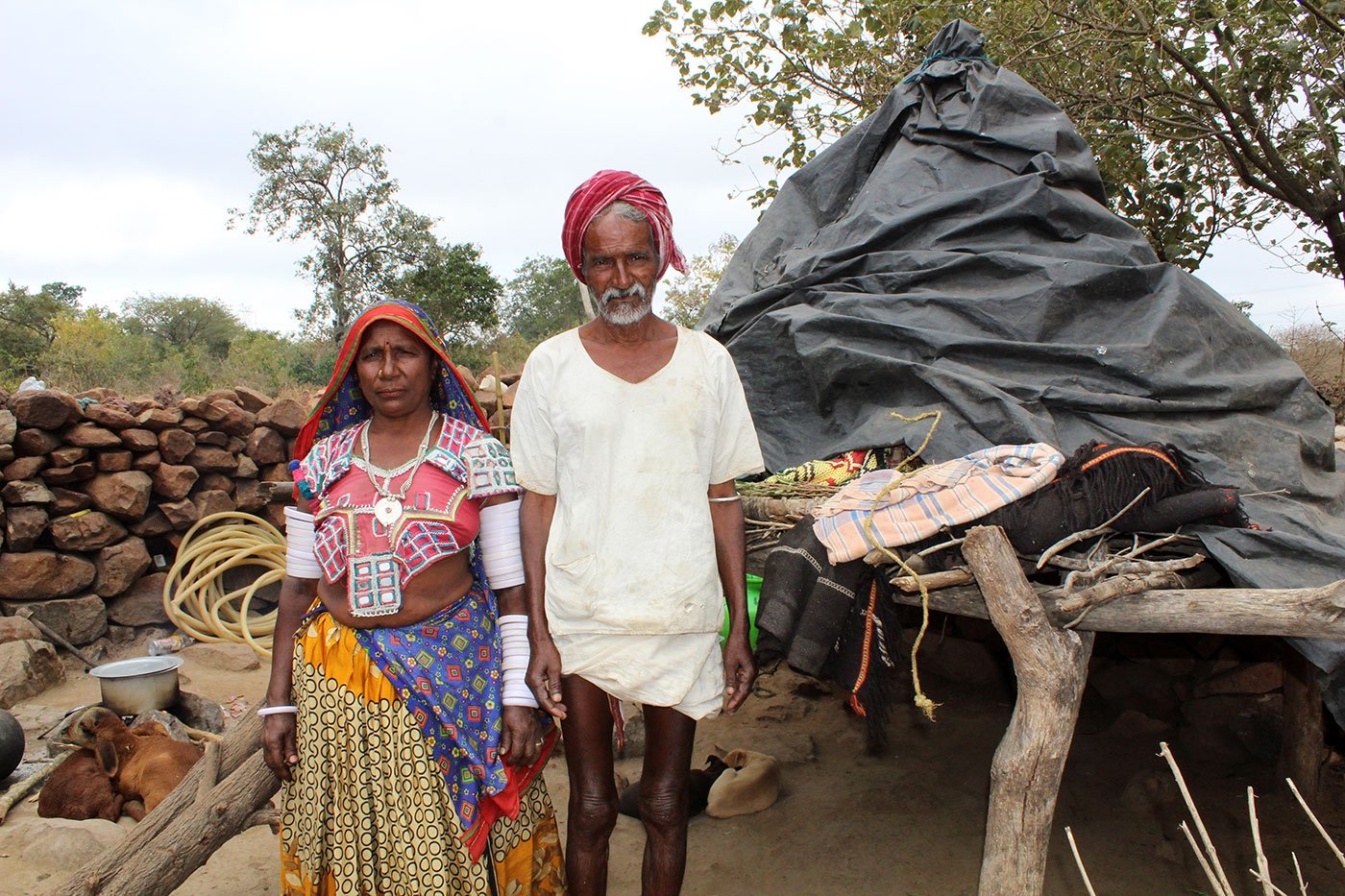 Eslavath Banya Nayak, 75, and his wife Eslavath Maroni, 60. Women don’t usually herd or trade cattle in the communities here, but look after them when the animals are kept in the sheds at home. At times, if the cattle are taken to nearby forests, the women accompany their husbands and stay there in temporary huts.

Every year, traders and farmers get together – usually in November, a few weeks after Diwali – for a trade in bull calves at the Kurumurthy Jatara, a local festival. This trade is part of a month-long fair that draws lakhs of visitors, and is held around 150 kilometres from Amrabad. The traders sell 12 to 18 month-old male calves purchased from breeders like Nayak for Rs. 25,000-30,000 per pair. Nayak sells around five pairs for the fair, and sometimes 1-2 more during the rest of the year. Buyer-farmers at the fair pay Rs. 25,000 to Rs. 45,000 for a pair. Sometimes, the traders are farmers too, who take the unsold cattle back to their villages and keep them for sale throughout the year on their farms.

However, maintaining the cattle can be time-consuming. Amrabad is a dry, deciduous forest covered with scrub, grass and bamboo. From June to October, there is enough food in the buffer zones of the reserve. But from November, the grazing grounds go dry. The forest department’s restrictions on entering the core zone make it difficult to find fodder for the cattle.

With this avenue closed, Nayak moves from his village, Mannanur, to Vatwarlapalle, his sister’s village,  around 25 kilometres away, in Amrabad mandal of Mahabubnagar (now Nagarkurnool) in Telangana. There, he has built a barn for seasonal use next to a stretch of forest that the animals can graze in.

Watch video: 'With a single command, all of them jump into the river'

Some cattle travel as far as 300 kilometres, towards Guntur, Prakasam and Nellore districts of Andhra Pradesh, where paddy hay of a third crop (either in February-March or May-June) is available. The herdsmen buy the hay or exchange it for manure, and the farmers allow the cows to sleep on their lands. The cattle come back to their home villages before the monsoon starts in July.

Banya Nayak and the other breeders sell only male calves. “We do not sell female calves. We do not even sell their milk. They are like a goddess to us,” says Nayak. However, he occasionally prepares a few bottles of ghee to sell in his village, and he sells the manure too.

To conserve and promote the cattle, the Lambadi and Golla communities have formed a society – the Amrabad Poda Laxmi Govu Sangam. In August 2018, the Sangam, with help from Telangana government officials, applied to the National Bureau of Animal Genetic Resources, which evaluates, characterises and utilises the livestock and poultry genetic resources of the country. After registration, the Poda Thurpu will become the 44th registered cattle breed in the country. This will bring benefits – among them, conservation, increased stock and more trade – under the central government’s Rashtriya Gokul Mission, started in 2014 to promote indigenous breeds.

The communities rearing the Poda Thurpu are waiting for this recognition.  “It will be very helpful and we will remember the help for generations,” says Ramavath Malliah Nayak, 60, a breeder from Mannanur village. 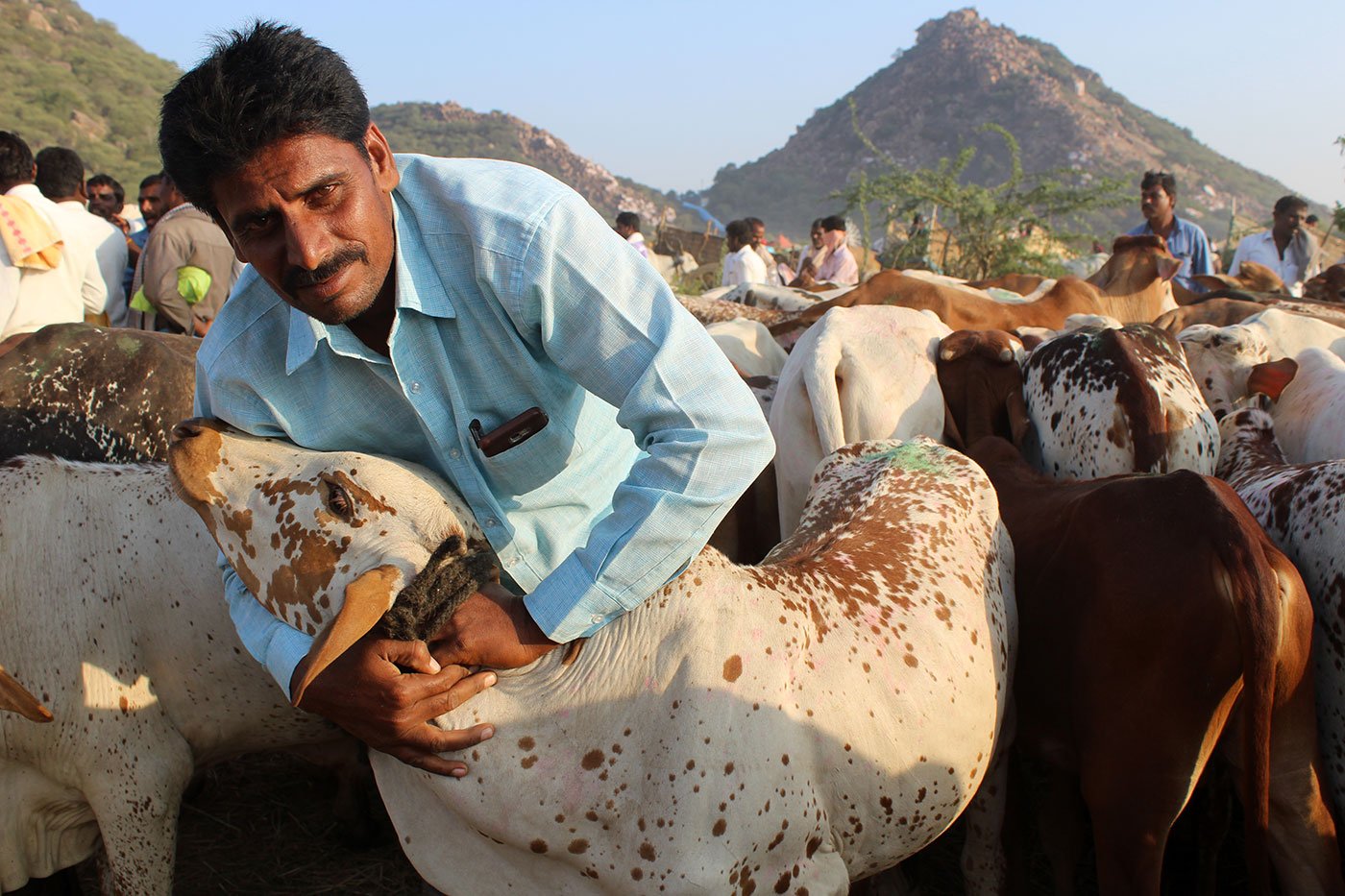 "We have an association with the cattle. We love and look after the calves like our children. These cattle have been with us for generations. Our lives depend on them. Our parents depended on them, we depend on them, and now our children too," says 38-year-old Gantala Hanmanthu. He is from the Lambadi community and president of the Amrabad Poda Laxmi Govu Sangam in Lakshmapur (B.K.) village in Amrabad mandal of Nagarkurnool district. 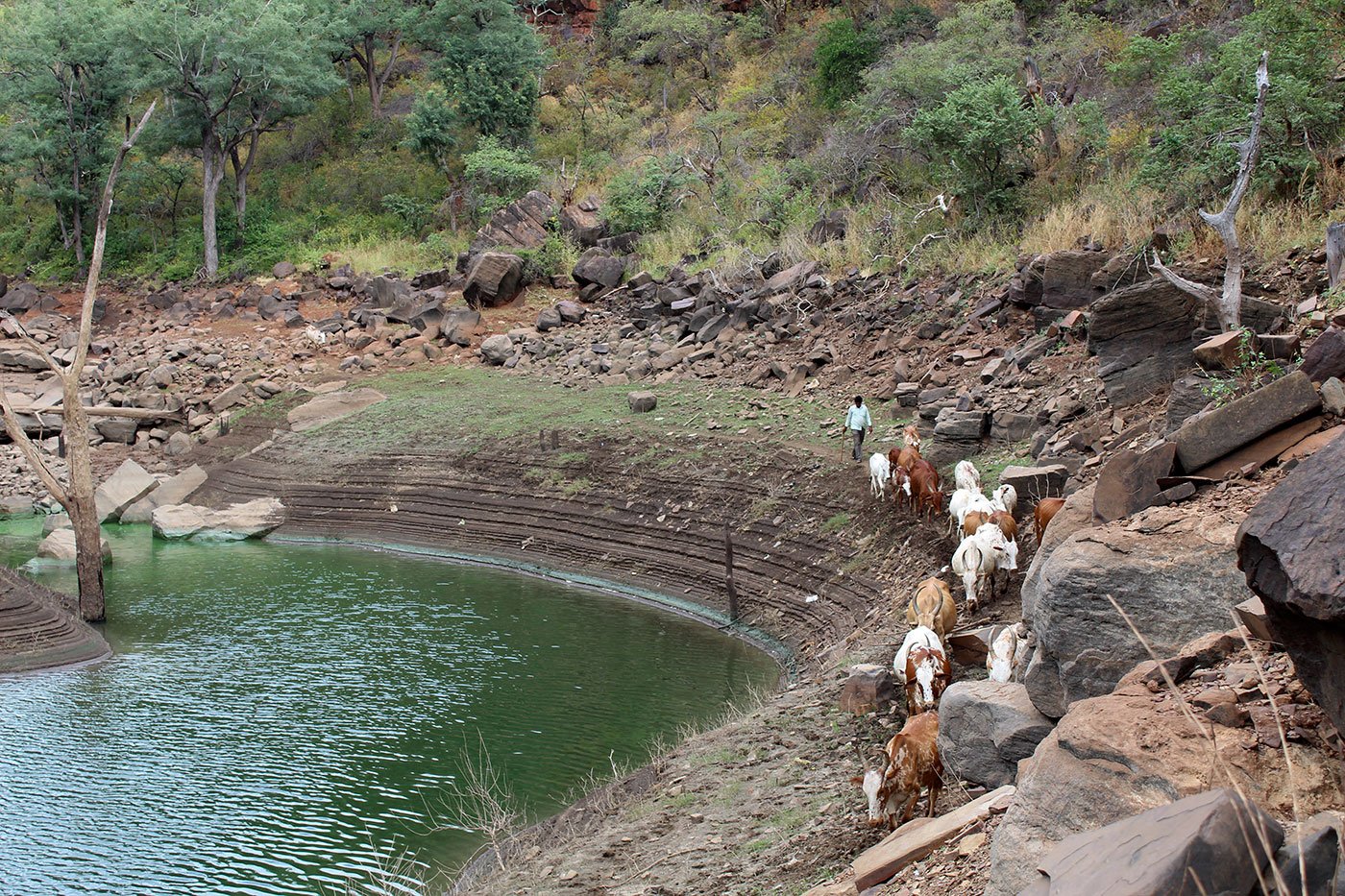 "We take the cattle for a minimum of 6-8 kilometres for grazing, and then come back. They can easily climb high hills to graze," says Hanmanthu. The cows were kept for a month at this spot 15 kilometres downstream from the Srisailam dam across the Krishna river, between Kurnool district of Andhra Pradesh and Mahabubnagar district of Telangana. 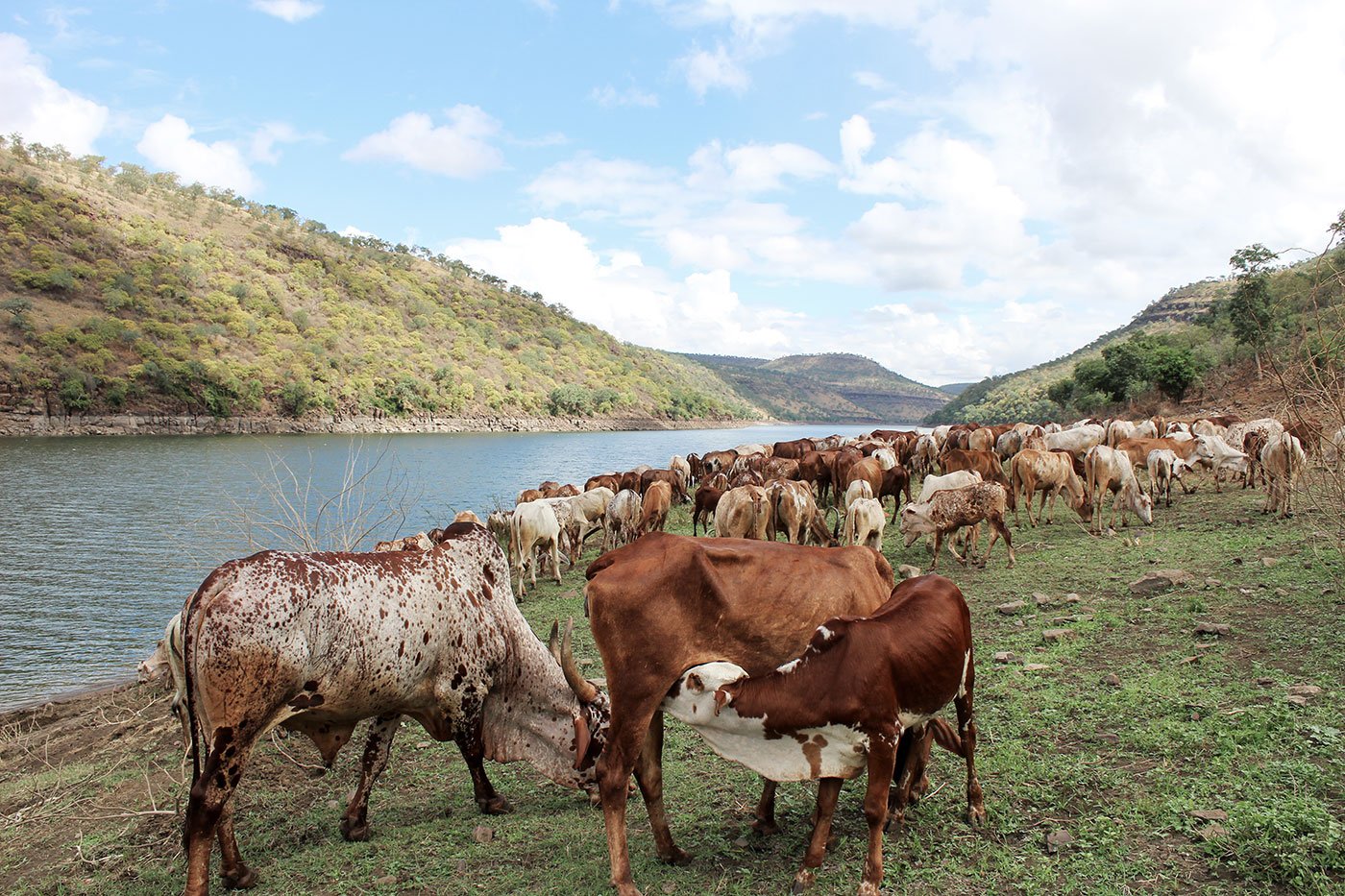 “In the forest, we set up a campfire, which is the sign for the cattle to identify their point of stay," says Hanmanthu. This is near Hanmanthu’s temporary shed, 15 kilometres from Srisailam dam, after the cattle crossed the river, which took them from Telangana to Andhra Pradesh. 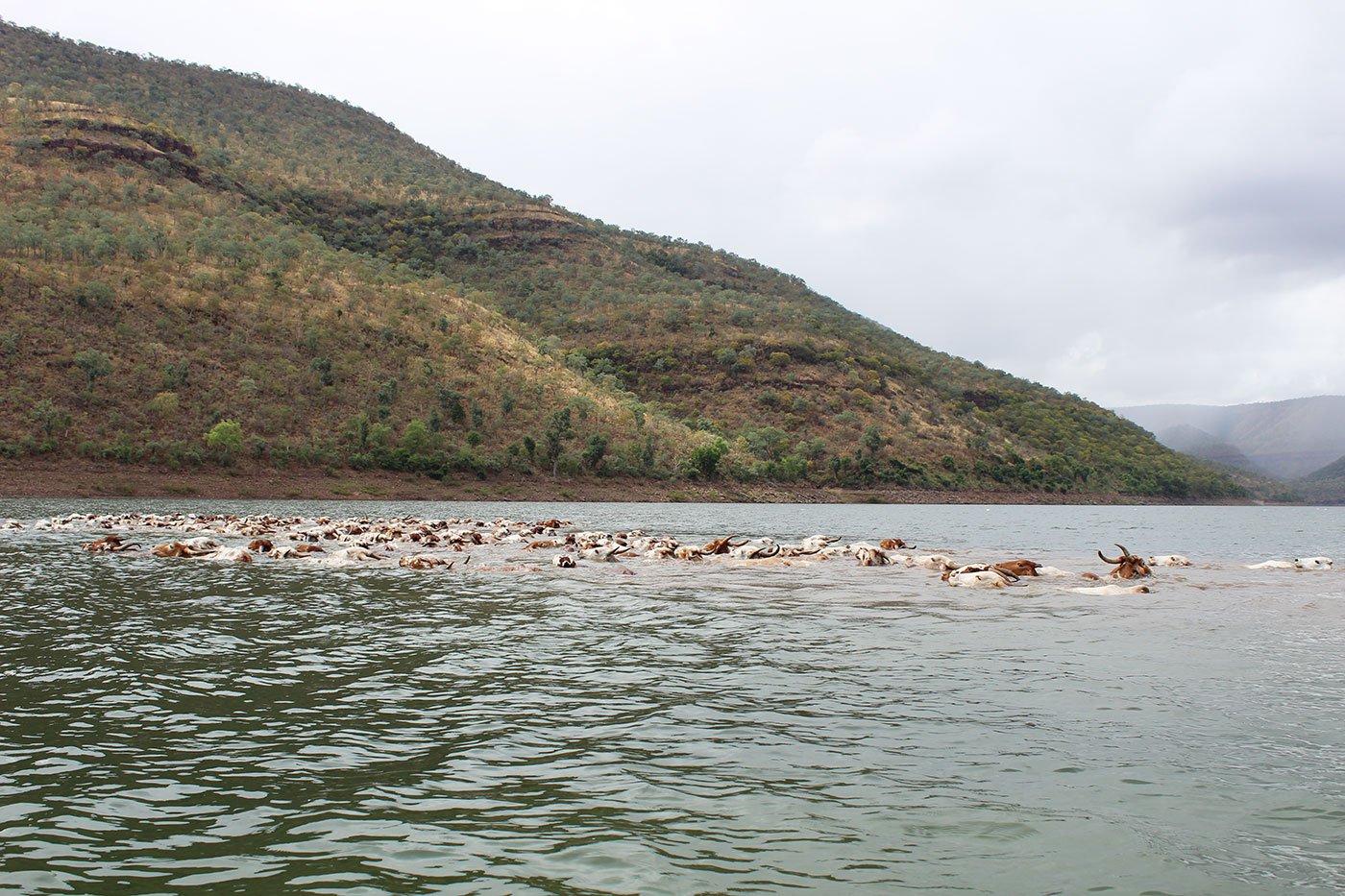 "They can easily cross the Krishna river. With a single command, all of them jump into the river. We do not beat them to follow our orders. A whistle is enough. Only the first one has to take the initiative. The rest follow, however far away it may be from the herd. We make a few sounds to communicate – it is a kind of language. If not all, at least a few notice and they respond,” says Hanmanthu. 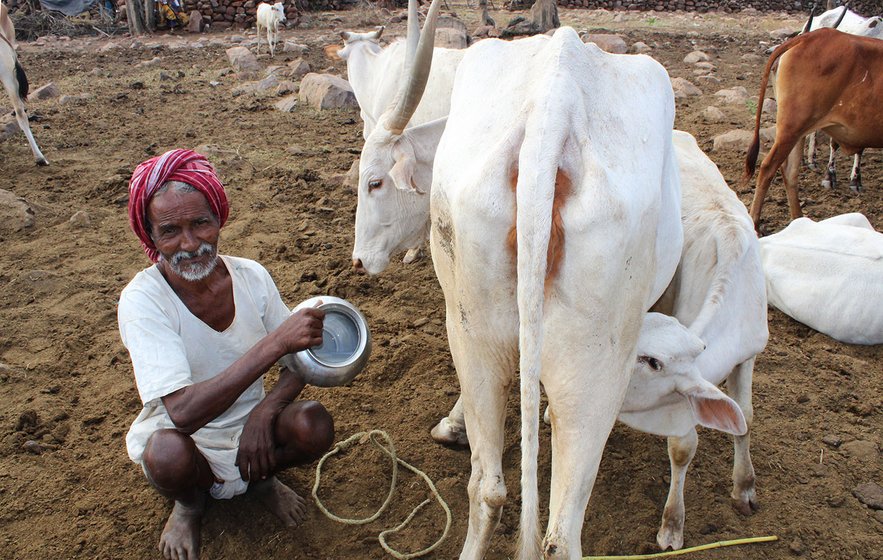 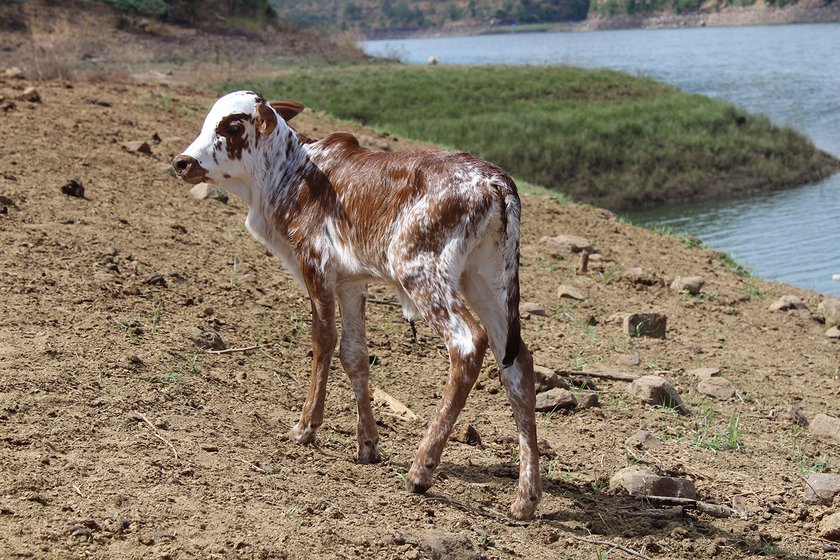 Left: Eslavath Banya Nayak keeps most of the cow’s milk for the calves to ensure they grow up healthy. Right: A two-week-old calf can swim too. However, for safety it is tied with a dry wooden log as a support during the swim. 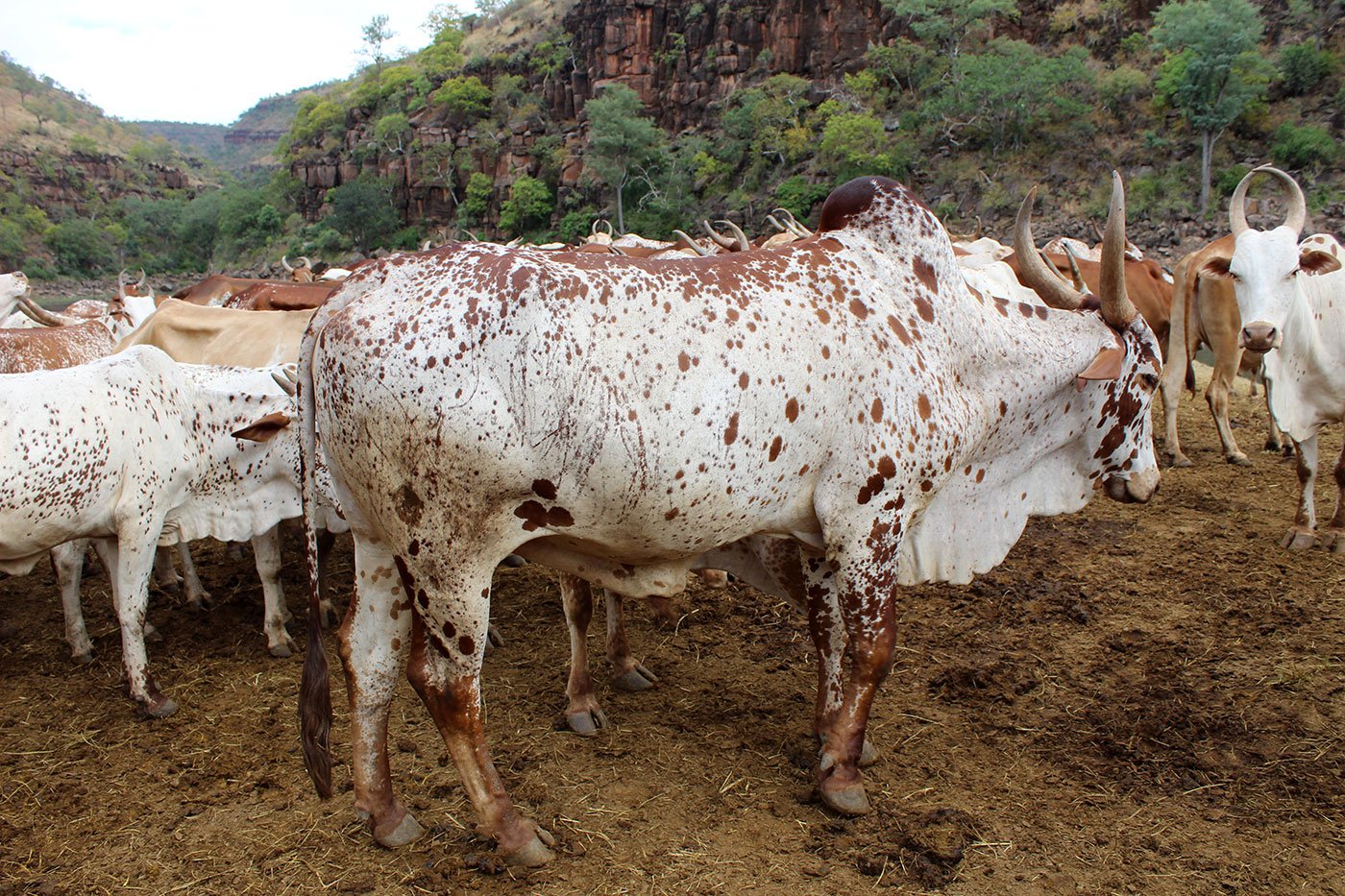 "When cattle stayed in the same barn for months in the past, even if the barns were waterlogged [because of the rains], their hooves would never soften. The hooves are unique and special to this variety,” says Hanmanthu. 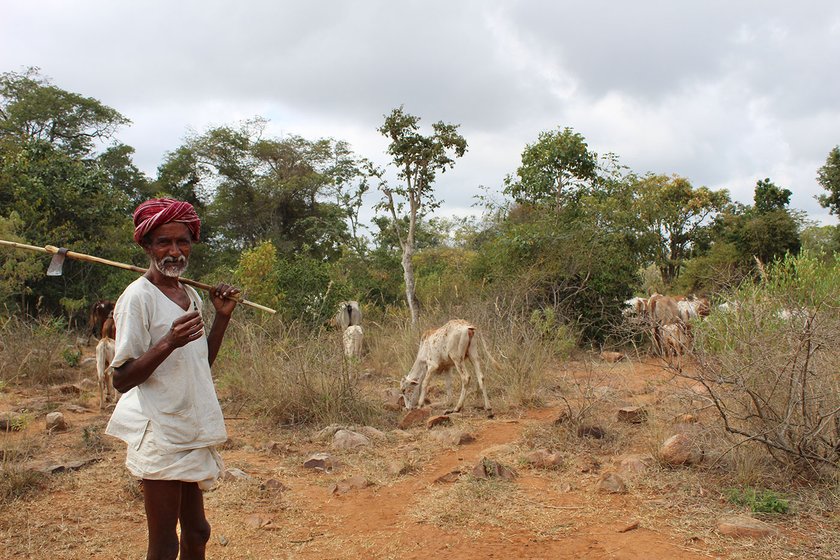 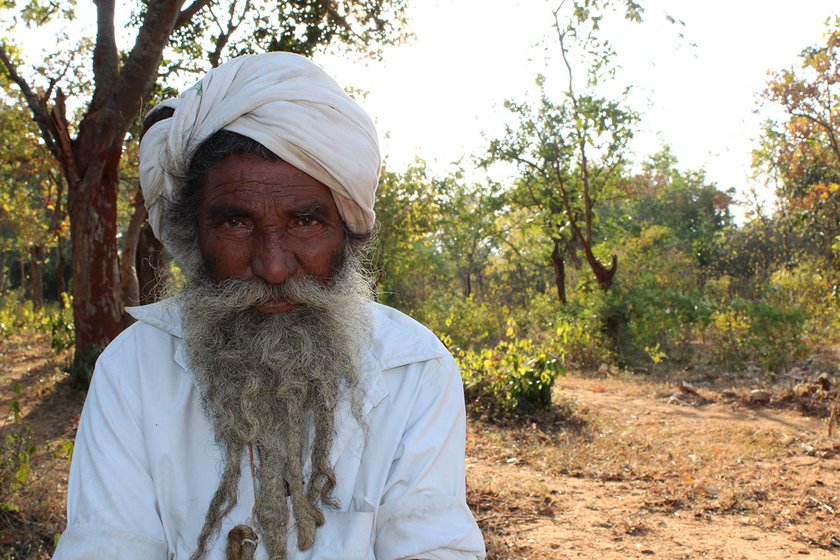 Since the Amrabad forest is a tiger reserve, often there is conflict between the forest officials and the herding communities. Moving in a large group, the cattle shuttle between the core and buffer zones for fodder. "In the forest, they can sense if a predator is close by. If it [a tiger, leopard, bear] is around, together they chase it away. If today they sense that a tiger is in Achampet [forest] zone, they move to Amrabad zone. If there is one in Amrabad zone, they move to Maddimadugu [forest] area,” says Ramavath Malliah Nayak (right), a breeder from Mannanur village. At times though, leopards (and, rarely, tigers) attack and kill the cows and the little calves too. 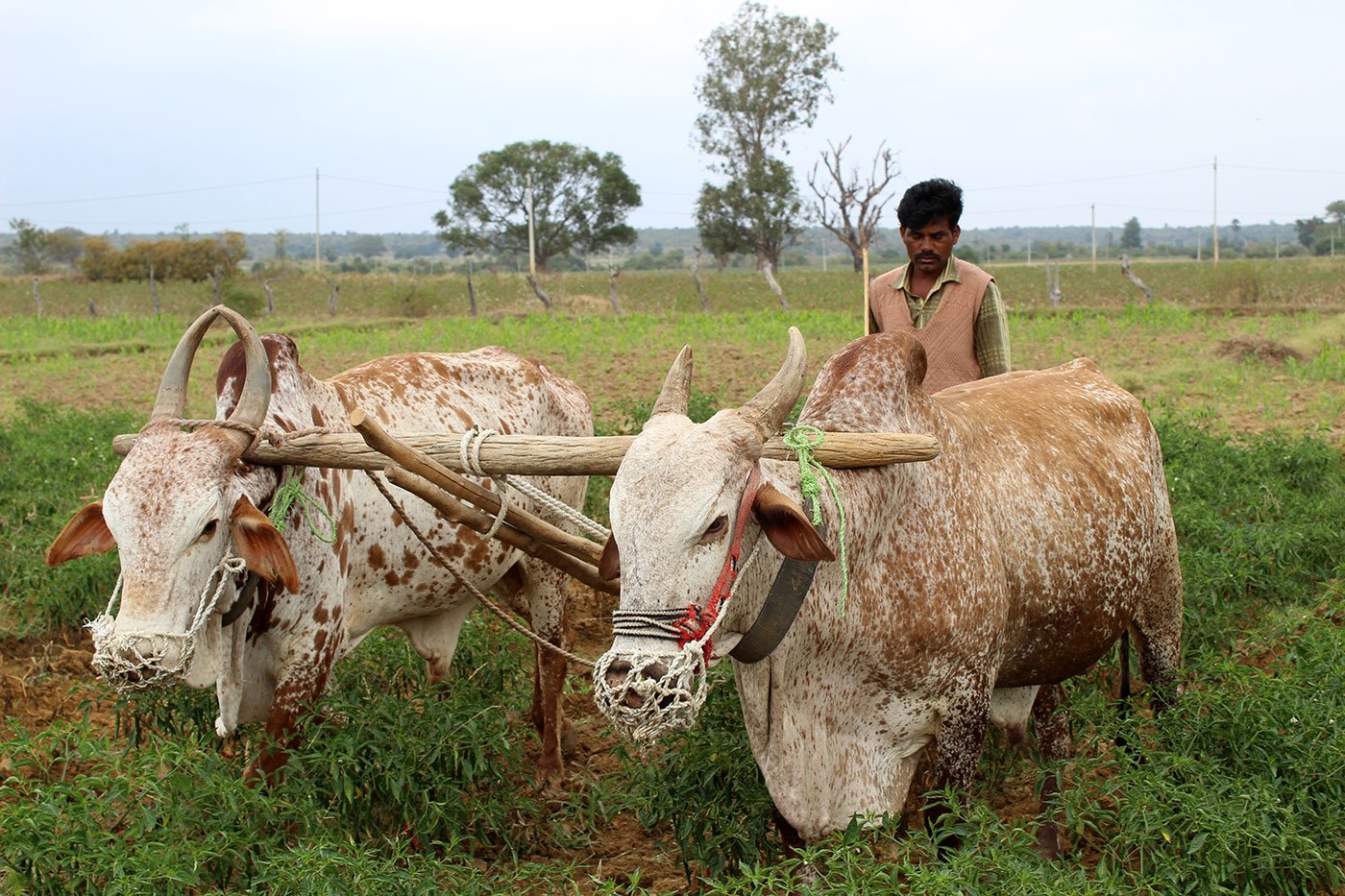 The Poda Thurupu cattle are of great help to small and marginal farmers like Rathnavath Ramesh (above) of Lakshmapur (B.K.) village. And, says Malliah Nayak, “They never go back on work, however tough it may be. Let us assume that it knows that it will die tomorrow. Then, it works all day, comes home and dies the next day." 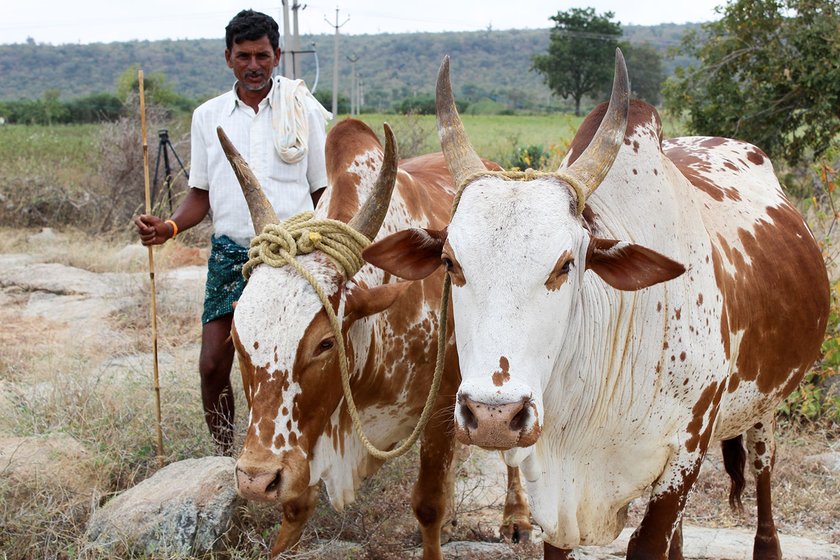 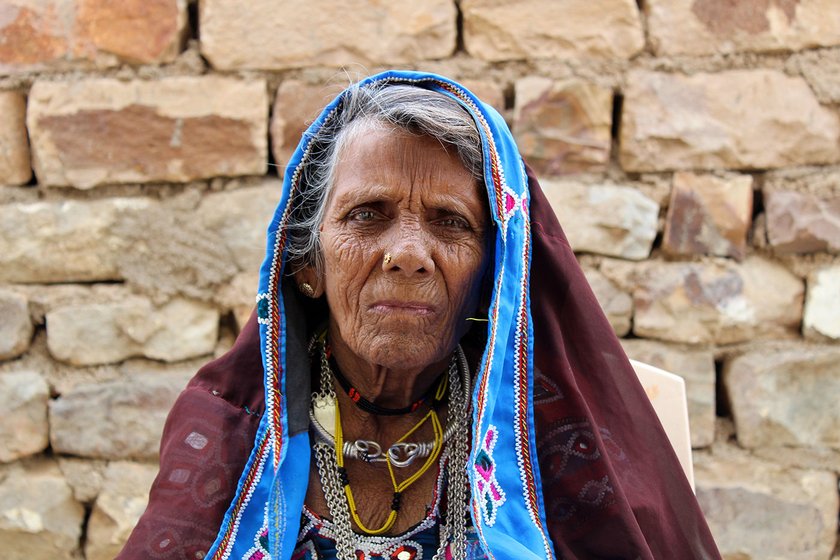 Left: Gantala Balu Nayak of Lakshmapur (B.K.) has six acres of land on which he cultivates cotton, chillies, millets and pulses, and depends on the Poda Thurupu . Right:  “I call them Palenki, Iddi, Bori, Lingi… they are the names of our goddesses,” recollects 80-old-year Gantala Gori, Hanmanthu’s mother. 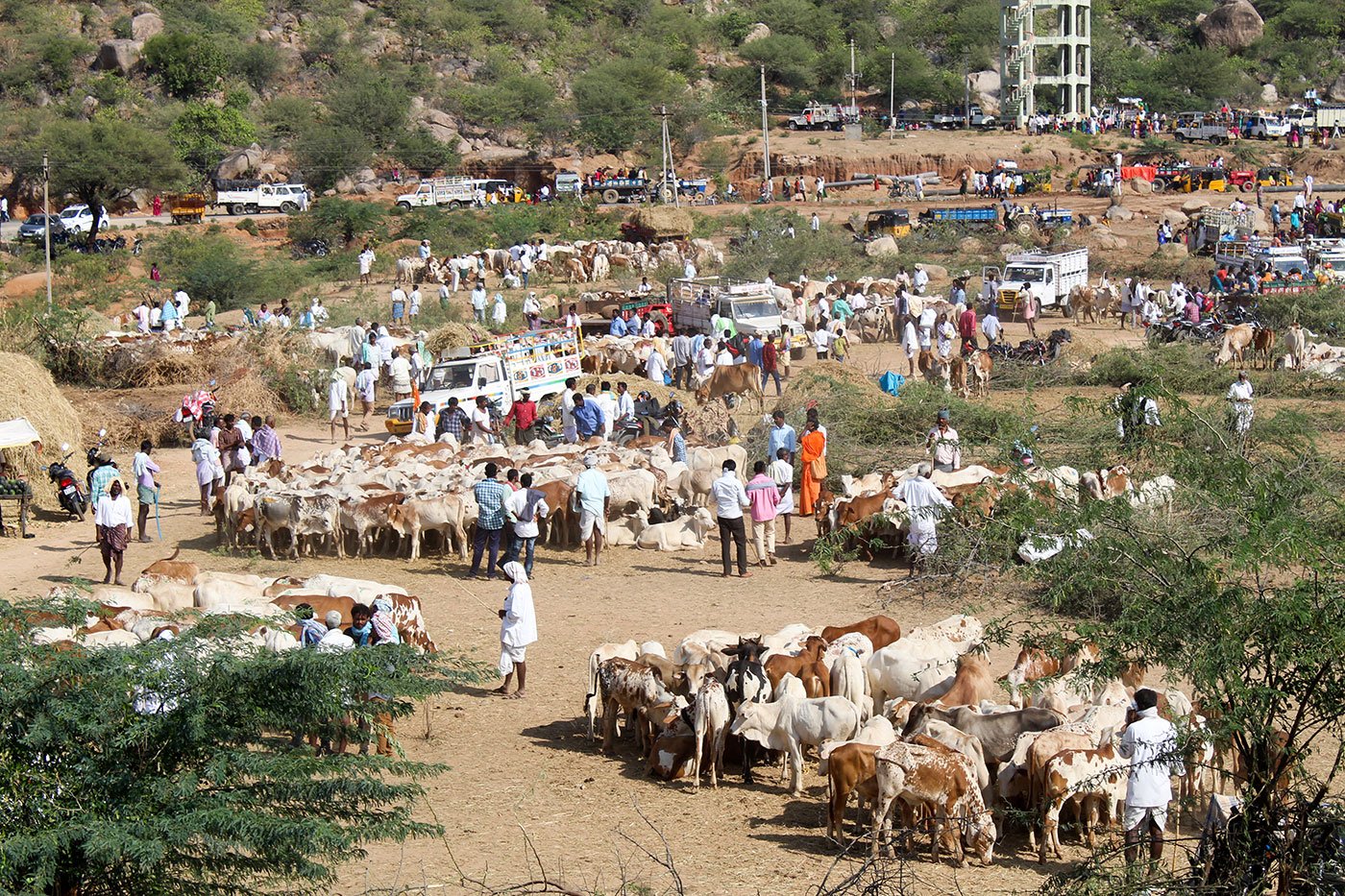 "Every year, we go to 'Kurumurthy Jatara' [a local festival in Ammapur village of Chinnachintakunta mandal in Mahabubnagar district] to sell the cattle. People come from Raichur, Anantapur and Mantralayam to buy the cattle. They believe that this variety is best suited for their farming,” says Hanmanthu.