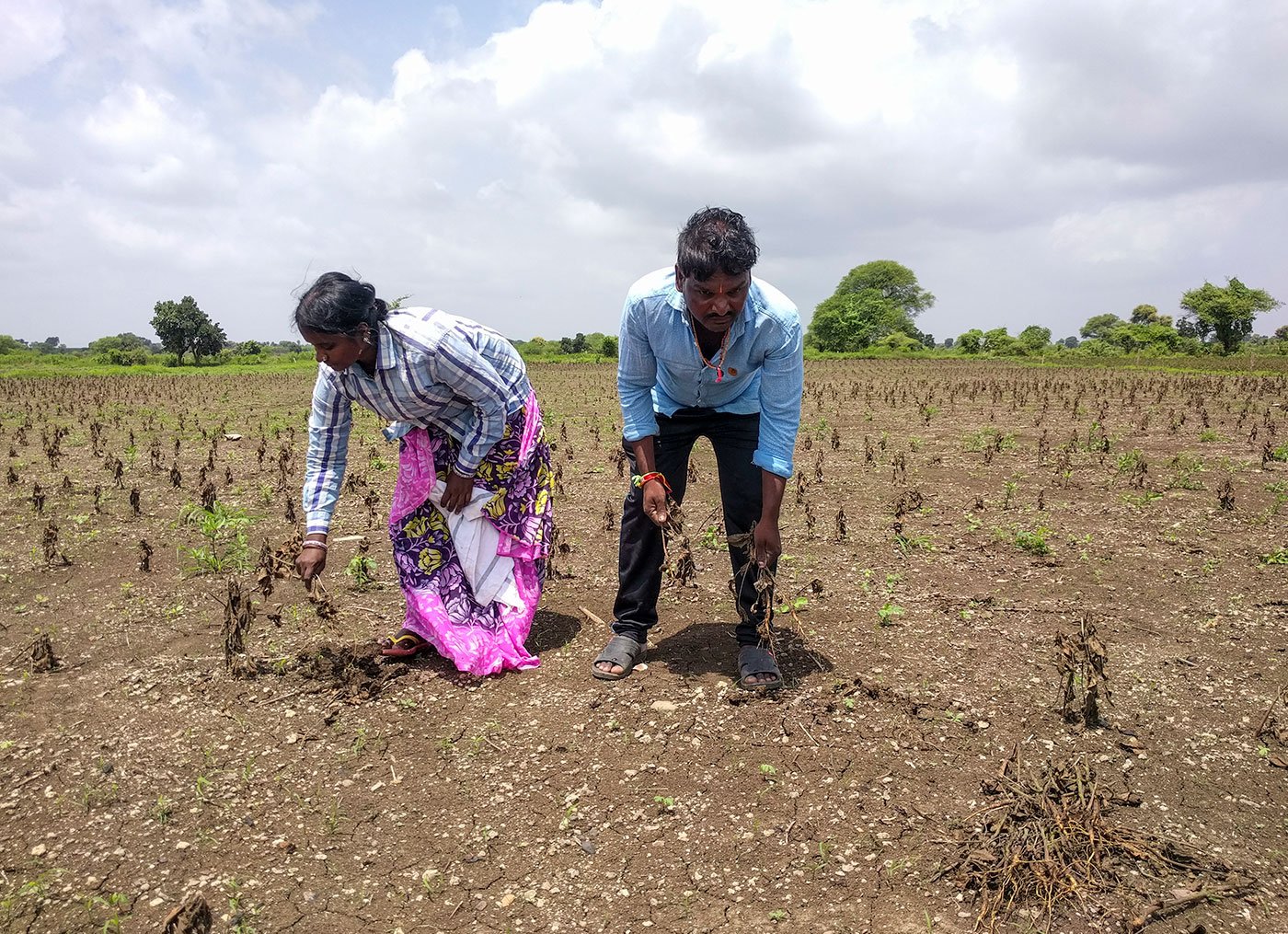 ‘It feels like the flood left mud in our mouths’

A downpour in August destroyed the cotton crop in the villages of Adilabad district. Many were first-time Dalit farmers with no insurance and heavy loans, now hoping for compensation and luck with the next crop

By the end of July, the Sathnala resevoir in Telangana’s Adilabad district was full. The farmers of Karanji village celebrated, hoping to irrigate their crops in both the kharif and rabi seasons. But a downpour on August 16 and 17 brought around 200 mm of rain. It flooded the fields on the banks of the canals, both upstream and dowstream of the reservoir on Sathnala river, a tributary of the Penganga, which eventually joins the Godavari. The flood washed away the crops – mainly cotton, a bit of soyabean – leaving only stones and sand in the farmlands.

Between June and August this year, Adilabad recieved 44 per cent more rain than the normal of around 880 mm for these months. Last year, during the same months, the district received 27 per cent less rainfall than the normal, shows data of the India Meteorological Department. So while for many farmers 2017 was a low-income year, 2018 has so far become a zero-income period.

Among them is Kuntawar Sangeetha of Karanji in Jainad mandal , a village of around 1360 people, located downstream of the Sathnala dam. In June, she and her husband Gajanan planted their first crop ever – of cotton – hoping to harvest it in January-February 2019.

Before this first sowing on her own land, Sangeetha was an agricultural labourer.  Gajanan too worked on an annual wage of Rs. 86,000 as a farm labourer. He was employed on the landowner’s condition that Sangeetha would work on the same land. Her work days were intermittent, and she earned Rs. 120 a day. “The last three years we worked with a malik (landowner),” she says. When they could not find work, wage labour through the MGNREGS helped. “Or I would load and unload sand onto tractors [from the Penganga, for a private contractor],” says Gajanan. 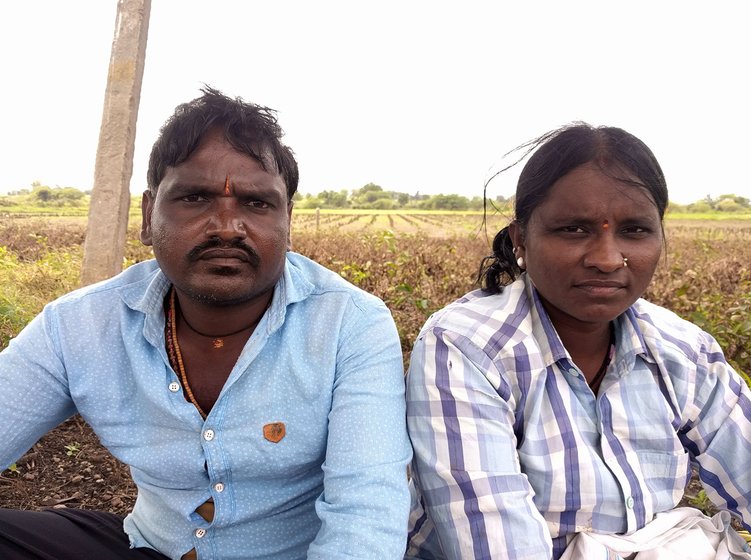 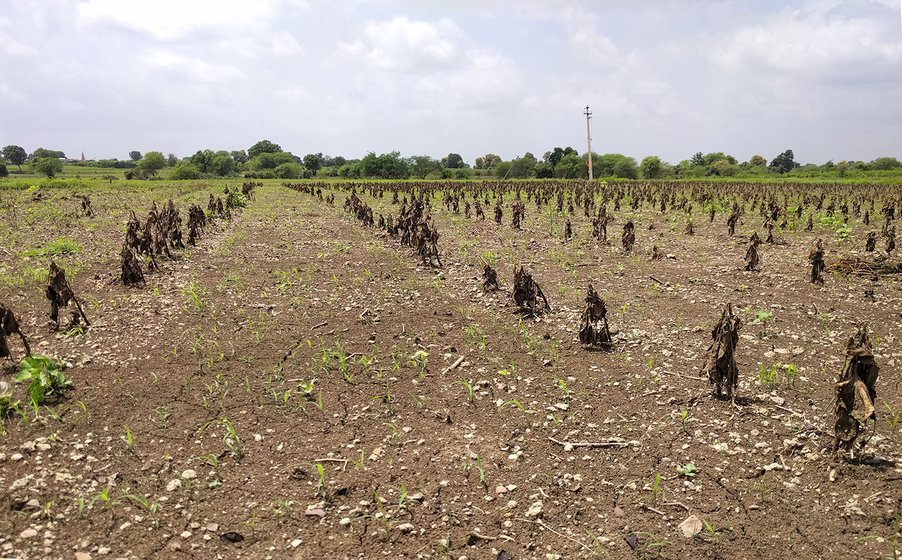 Kuntawar Gajanan and Kuntawar Sangeetha of Karanji village lost their crop (right) in the flood: 'We don’t know what to do… this is the first time we are cultivating'

In May 2018, Sangeetha was allotted three acres under the state government’s Land Purchase and Land Distribution Scheme (LPS), introduced in 2014 for landless Dalit women in families dependent on agriculture. Karanji village is home to 340 people from Dalit communities, 170 of them women – of whom 40 got land up to or less than three acres, depending on whether they had got land under previous schemes or if their families had bought any land.

When Sangeetha got her parcel of land to cultivate, she and Gajanan – and their three children, Soundarya, 16; Vaishnavi, 14; and Tanusha, 12 – were anxious. “As farm labourers, we didn’t know the processes in cultivation. We only knew how to carry out the tasks that malik assigned to us.”

But the rains swept away the Kuntawar family’s hopes.“We don’t know what to do… this is the first time we are cultivating,” says 35-year-old Sangeetha. “It feels like the flood has left mud in our mouths.”

Sangeetha has not got the land title yet – the Pattadar Passbook, a small bound book that contains details of the land owned by a person ( pattadar ). Digitisation of records at the revenue department could be one reason for this delay. This meant, at the time of sowing the cotton crop in June, she was was not eligible for a bank crop loan or support from the Rythu Bandhu (Agriculture Investment Support Scheme) of the Telangana government, which would have given her Rs. 4,000 per acre for each sowing season. Without the land title, she also lost out on crop insurance under the Pradhan Mantri Fasal Bima Yojana and the farmers’ life insurance cover under the Rythu Bima.

“We borrowed Rs. 30,000 from the gudem dalaari (village moneylender),” says Sangeetha. She and Gajanan used this amount to clear and plough the land and buy seeds, fertilisers and pesticide sprays. “We were to take our harvest to him at the end. He then deducts the loan plus interest on it and pays the balance. But the entire crop got damaged,” adds Sangeetha, who was not certain of the interest rate, though others here say it is 20 to 25 per cent for the 7-8 month crop season.

In a good year – when there are no adverse weather conditions, no pest attacks and a reasonable minimum support price — one acre here can yield 10 quintals of cotton and fetch a farmer Rs. 22,000 as profit.  Instead, in Karanji village, all the 40 Dalit women who got land under the LPS lost their crops this year.

Preliminary surveys by the agriculture department note that 73 farmers and 323 acres  were affected in Karanji. Across Jainad mandal , the flood impacted 5,845 farmers and 21,260 acres. 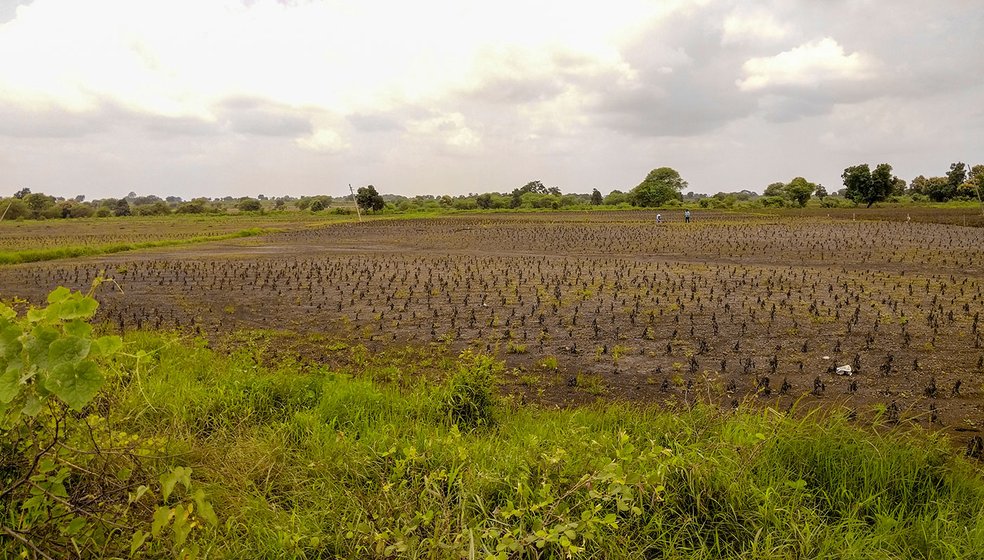 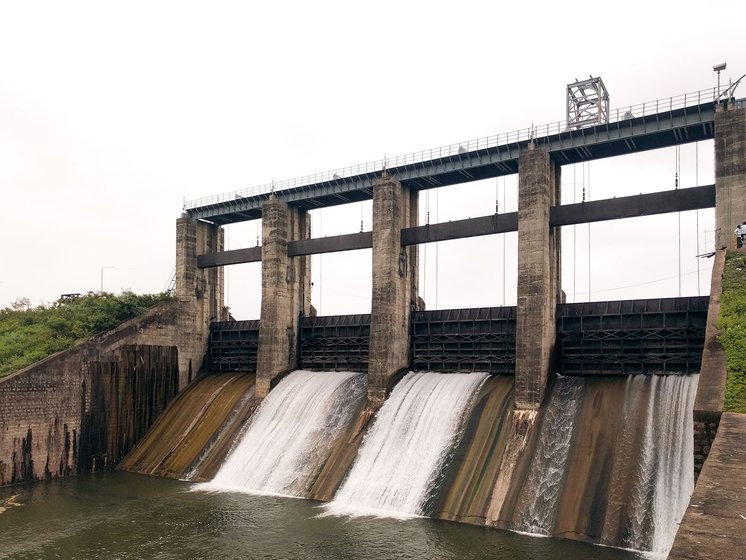 Left: A flood-damaged field in Karanji village. The new landowners' plots were perpendicular to the canal, and almost everything was washed away. Right: The Sathnala dam can irrigate up to 24,000 acres across 25 villages when it is full

In early August, Gajanan and Sangeetha applied for a loan from the Telangana Grameena Bank’s Karanji branch. They submitted land registration details (obtained from the Telangana Scheduled Castes Cooperative Development Corporation) and a certificate from the MRO (mandal revenue officer). By the end of September, they had received a loan of Rs. 60,000.

“We are thinking of growing chickpea in the rabi season [starting this month, October] and are removing the dead plants. We will have to borrow more money,” says Gajanan, who hopes to recover the expenditure on cotton and the money he invested on chickpea through a bumper harvest of chick peas.

Under the LPS, the recipients could choose the location of the land. In Karanji, only the land next to the canal was available. “All of us together have chosen these lands. They are very fertile. We can irrigate our crops even in the second season every year. That is why we were happy with the lands,” says Thallapelli Pochanna, whose wife Thallapelli Kavitha is one of the 40 Dalit women who was allotted land under the LPS.

“The [cotton] plants received sufficient water until before the floods. We prayed that the gulabi purugu [pink bollworm] should not attack. With enough water and no pest attack, we would have got a very good yield. But what can we do? If not the crops, at least the land remains,” says Chennur Ganganna, the husband of Chennur Srilatha, who too got land under the LPS.

“The land will not disappoint us. If not this year, we are hopeful of a good harvest next year. We get floods of varying magnitude once in five years, like elections. We will face it,” said a group of farmers gathered to tell their stories. 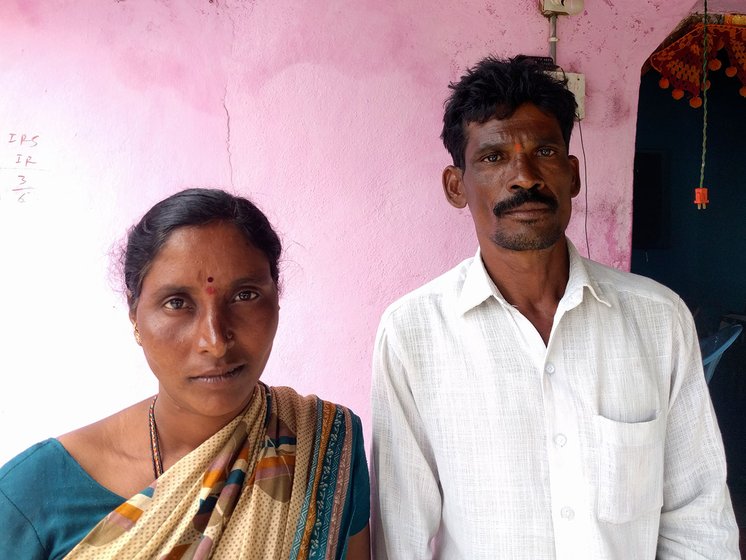 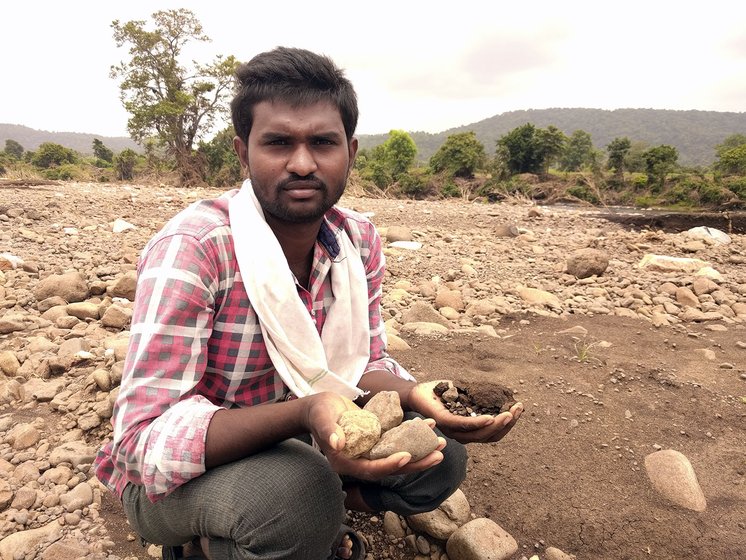 Left: Mentham Pentamma  and Mentham Suresh of Syedpur village were hoping to fund their daughter's education with the profit from the cotton harvest, but lost their entire crop. Right: As did Bavne Bhim Rao, who is now  now working as a labourer, spraying pesticides

The devastation is no less in the villages upstream, east of the reservoir. In Syedpur, a village of  around 1,700 people in Bela mandal , around 30 kilometres from Karanji,  crops as well as cultivable land were washed away. Most of the fields are now strewn with stones.

Among these is 35-year-old Mentham Suresh’s field. Every year, he cultivates cotton on the three acres he owns and on another 10 acres he leases. But this year, he took an additional 12 acres, expecting to make more than usual. He planned to use the profits to fund his daughter’s education. The rains turned everything upside down for the family. Instead of a profit, his debt has multiplied to Rs. 8.8 lakhs. He has to pay interest as well.

“My elder daughter scored more than 60 per cent in Class 12 and wants to study engineering. I asked my husband to select the land [to lease] next to the canal so that we can irrigate the crops and make some more money and pay her fees,” says Pentamma, Suresh’s wife.

Bavne Bhim Rao’s field in Syedpur was also destroyed by the flood. Of his seven acres, three were washed away, the [cotton] crops on one acre were uprooted and the [cotton] flowers on the remaining land withered. He cannot find a moneylender willing to give him a loan. So Bhim Rao – he and his wife Ujwala have a 14-month-old baby girl, Jayasree – is now working as a labourer, earning Rs. 200 a day spraying pesticides.

Some relief might be on the way, though. If the state classifies the flood as a natural disaster, the farmers could receive compensation under the State Disaster Response Fund — Rs. 2720 per acre for loss of standing crop and Rs. 4,880 for the removal of debris. “The officials inspected our crops. They assured us that we will get compensation,” says Sangeetha. She and the other farmers of Adilabad are waiting – and hoping.