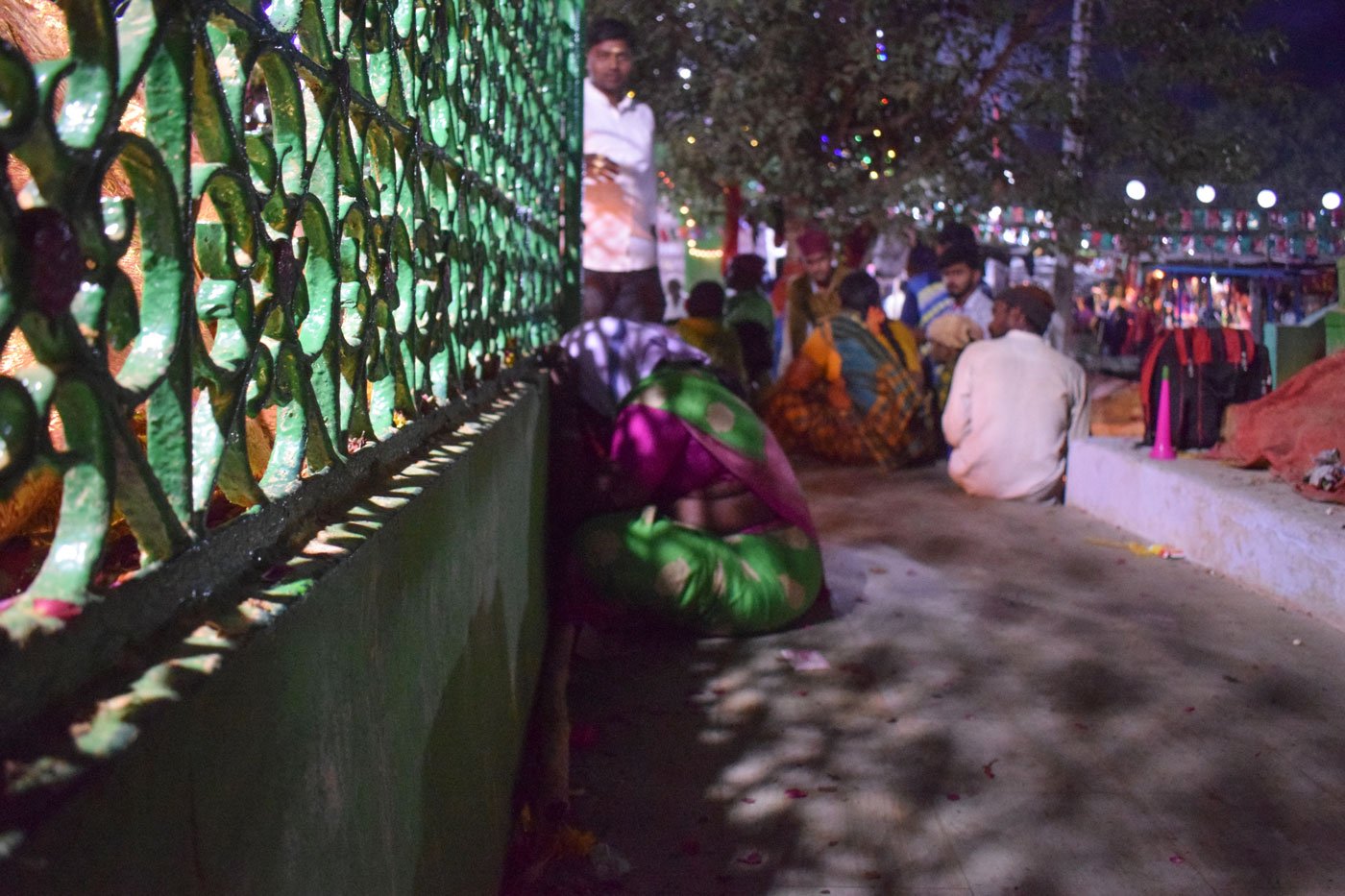 The ‘people’s god’ of Suryapet

Tens of thousands of pilgrims come from the villages of Telangana and Andhra Pradesh to the Urs of Hazrat Janpak Shaheed – many drawn by an enduring faith in the dargah, some for brisk business at the venue

Just before noon, a man calls out in Telugu over the loudspeakers: “Pandu Naik, your daughter Gayathri is with us. Please come to the control room immediately.” Scores of such announcements have been made for children as well as adults since the previous night. In the swirling crowds, a few usually get separated from their families and companions – and reunited after an anxious stretch of time.

The pilgrims and visitors have started streaming in from the previous night – at least 50,000 of them, estimate local media. By sunrise the next day, the lane leading to the dargah in Janapahad village of Telangana’s Suryapet district is nearly packed.

It’s the Urs, the death anniversary of Hazrat Janpak Shaheed, observed on the fourth Friday of the first calendar month – this year, on January 24.

The day draws people from many communities – Muslims as well as Hindus, and is an important festival for the Lambadis too, a Scheduled Tribe. The visitors come mainly from Khammam, Warangal and Mahbubnagar districts in Telangana, and from Guntur, Prakasam and Krishna districts in Andhra Pradesh.

Besides its secular appeal, this Urs also draw farmers seeking fortune for their land. “ Panta, pairu, pillalu [yield, crop and children] will be good. That is why we come regularly to the gandham [sandal] festival,” says Moilolla Anjamma, a farmer who belongs to the Rajaka community (a backward caste in Telangana). She, along with her husband Moilolla Balaiah, have come from Achampet mandal in Mahbubnagar district, around 160 kilometres from the Hazrat’s dargah in Palakeedu mandal . 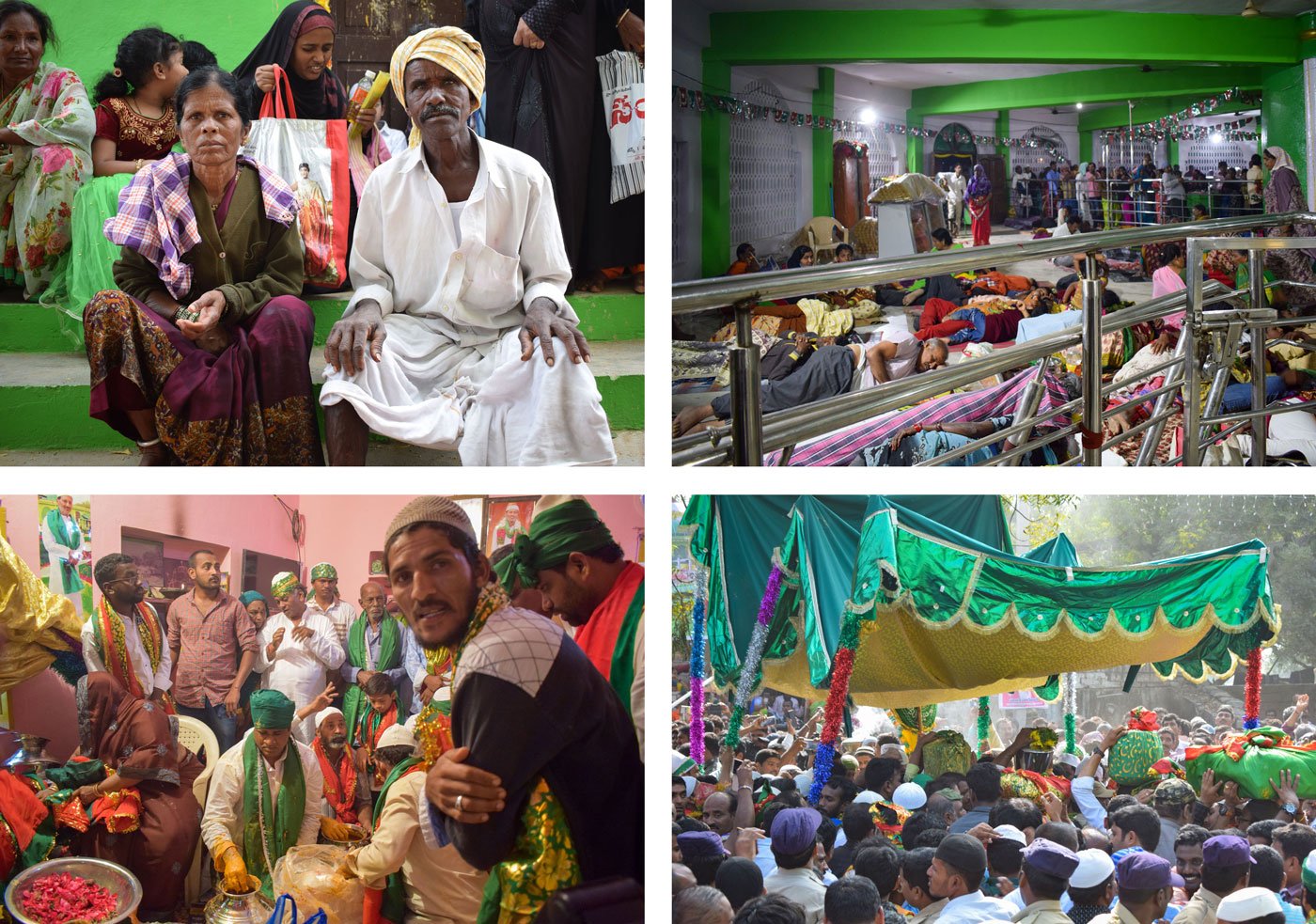 Top left: Moilolla Anjamma and Moilolla Balaiah have been devotees at the dargah for decades, drawn here by faith and hope. Top right: People keep streaming in from the previous day; many spend the night in an extended portion of the dargah , some as part of their vow. Bottom left: The next morning, the day of the Urs, o ne of the priests, or a family member, performs rituals inside the shrine. Bottom right: By 10 a.m., the hugely popular gandham (sandal ) procession begins

Anjamma, like many others, comes here with an enduring faith in Hazrat Janpak Shaheed – who locals refer to as Jan Pahad Saidulu. Some accounts say he lived here 400 years ago. A booklet titled People’s God , published by the dargah authorities, speaks of how, in the 19th century, a local landlord’s cattle went missing. He searched everywhere but could not find the animals. Then he came across the dargah of Saidulu, prayed there and promised to celebrate an annual festival at the shrine and construct a well – which still stands – to provide water to pilgrims. By the time he went home, his cattle had returned.

The booklet narrates other accounts – of how anxious couples have been blessed with children, alcoholism cured, illnesses relieved. The force of these stories of faith carries over to present times, bringing many like Anjamma to the Urs.

It's also why many parents name their children after the saint. Some say that Saidi Reddy, the MLA from Huzurnagar in Suryapet, and Jana Reddy, a former home minister, are also named after Jan Pahad Saidulu. Many visitors to the Urs have names like Saidulu, Saidamma, Saidiah and Saida.

The sandal procession that Anjamma attends begins around 10 a.m. that last Friday in January, from the priest’s house, around 100 metres from the dargah . Then it moves through various nearby hamlets, carrying sandalwood paste in steel vessels decked with jasmine and roses, under a cloth canopy held high by poles and pilgrims. The procession reaches the dargah by around 3 p.m., where the sandalwood paste is applied to the tombs – besides Hazrat Janpak Shaheed, it also houses his brother Moinuddin Shaheed's tomb.

Devotees make every effort to reverentially touch any object that is part of the gandham ritual – the vessels, the cloth, the pankha , and even the horse that leads the procession. Neither the dust on the roads nor the fear of a stampede stops them.

Devotees make every effort to reverentially touch any object that is part of the gandham ritual – the vessels, the cloth, the pankha , and even the horse

“Five years ago, my brother came here with his grandson. They fell down during the procession. The child [around three years old] could have died, but they somehow escaped from a near-stampede,” recollects Balaiah. While returning to their village, he and Anjamma, like many of the other devotees, take back some sandal paste, distributed by the dargah ’s functionaries in sachets, to apply on their fields, on their farm implements, and even on their clothes.

Anjamma and Balaiah’s faith goes back 30 years, when they built a small dargah on their eight-acre farmland, where they cultivate paddy and cotton. They say this was a form of prayer for their son’s health. They visit various temples too, from where, like the sandalwood paste from the dargah , they bring back a poster or a calendar. “And we also come here,” says Balaiah, travelling by bus from their village.

The Urs is also an occasion for shopping and joyrides. The area around the dargah becomes a fairground with ferris wheels, slides for children and other attractions, as well as a venue for brisk business. With word spreading that sales here can be profitable, a growing number of vendors try to find a slot – on carts, on the ground, in small shops and stalls – selling toys, bangles, posters, clay idols, imitation jewellery, eggs, milk, lottery tickets, handbags and more.

“We do not have time to even brush our teeth. At least three people have to attend to a cart,” says Rupavath Saroja, who prepares and sells snacks, including her signature concentric patti , made of chickpea flour. Food carts here also sell jalebis , boondi mixture, coconut halwa and various other items.

This year though, with the profusion of carts, Saroja is expecting lower sales than last year’s Rs. 30,000. She has a permanent small shop, not far from the dargah , which is open all days of the week – though sales are at a peak on the day of the Urs, and high on all other Fridays of the year, when Saroja makes between Rs. 5,000 and Rs. 10,000, she says.

“We get a profit of Rs. 15,000 [per pushcart] in a day on Urs,” says Misal (he did not give his full name), who sells bangles. He usually earns that amount in a month. This year, he and seven other vendors hired a truck for Rs. 16,000 to transport their pushcarts from Vijayawada to the dargah for the day’s business. 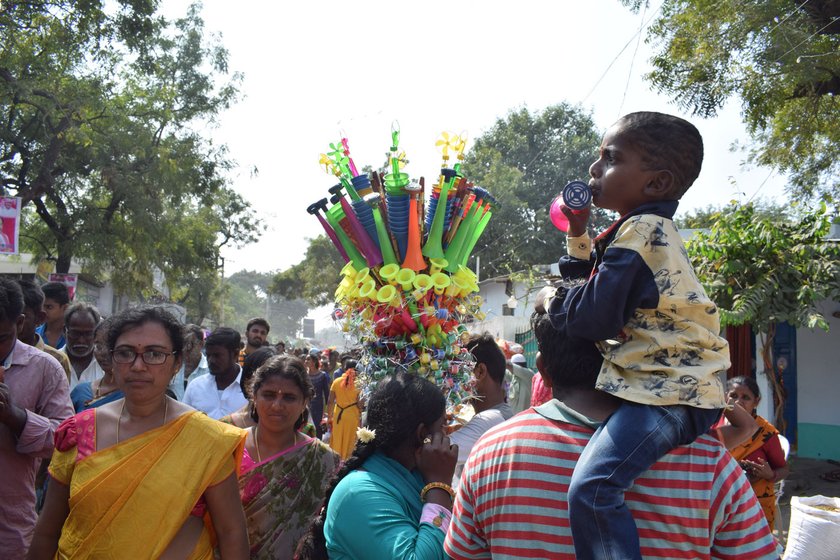 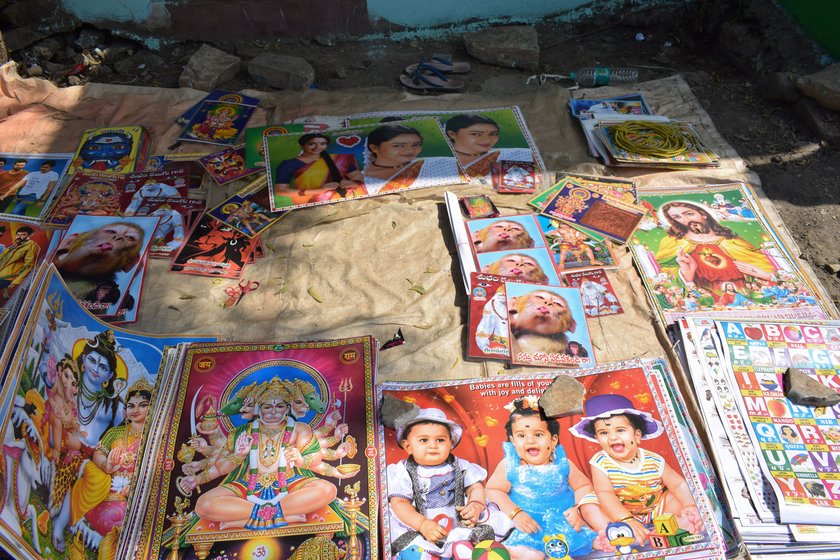 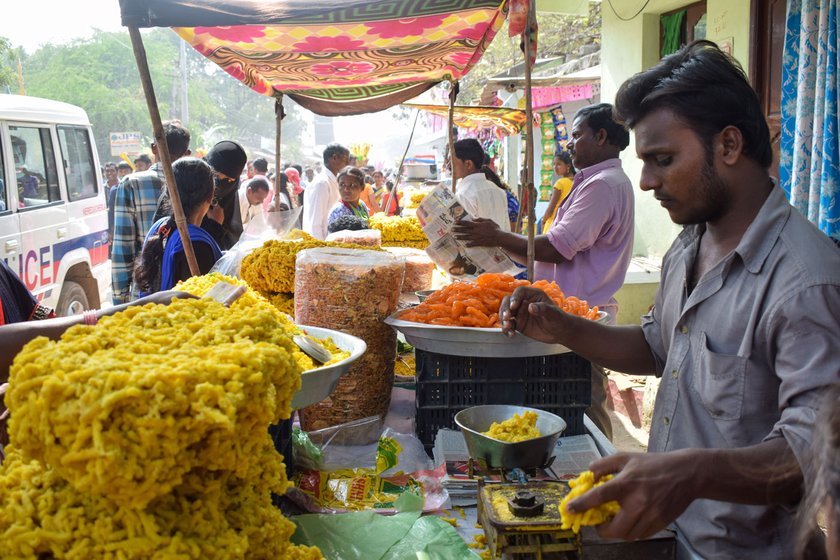 The Urs is also an occasion for brisk business. With word spreading that sales here can be profitable, a growing number of vendors try to find a slot

For people living in villages near the shrine too, it is an important occasion. “We pray our padi-panta [cattle and crops] will do well. Our main festival is the Urs,” says Bhukya Prakash, 48, who belongs to the Lambadi community. He lives in Kalmet Thanda, a hamlet two kilometres from the dargah , and cultivates cotton, paddy and chillies on 5.5 acres.

“My family spends around Rs. 30,000 [before and during the Urs],” adds Prakash, on buying clothes and jewellery, and for preparing flour-based snacks – expenses that, he says, they don’t undertake during other popular festivals such as Dussehra or Diwali.

Prakash is preparing for a rehearsal when we meet, reciting his dialogues for a drama that he and his team have been working on for 20 days. This is a recent addition to their celebrations. It’s a revenge story called ‘ Nidra lechina rudra simhalu ( Roaring lions that woke up ) , which will be be premiered for his entire village the day after the Urs, when the celebrations will continue.

For the Lambadis, the kanduru is especially important at the dargah – the offering of goats or sheep as thanksgiving or with hope – of securing a college admission, recovering from an illness, reaping a good harvest. But because of the crowds, many instead offer poultry on the day of the Urs, and cook it on makeshift wood stoves. Some bring their own vessels, others rent them along with firewood from local shops. The spicy aroma of food being cooked mingles with the sandalwood and dust. 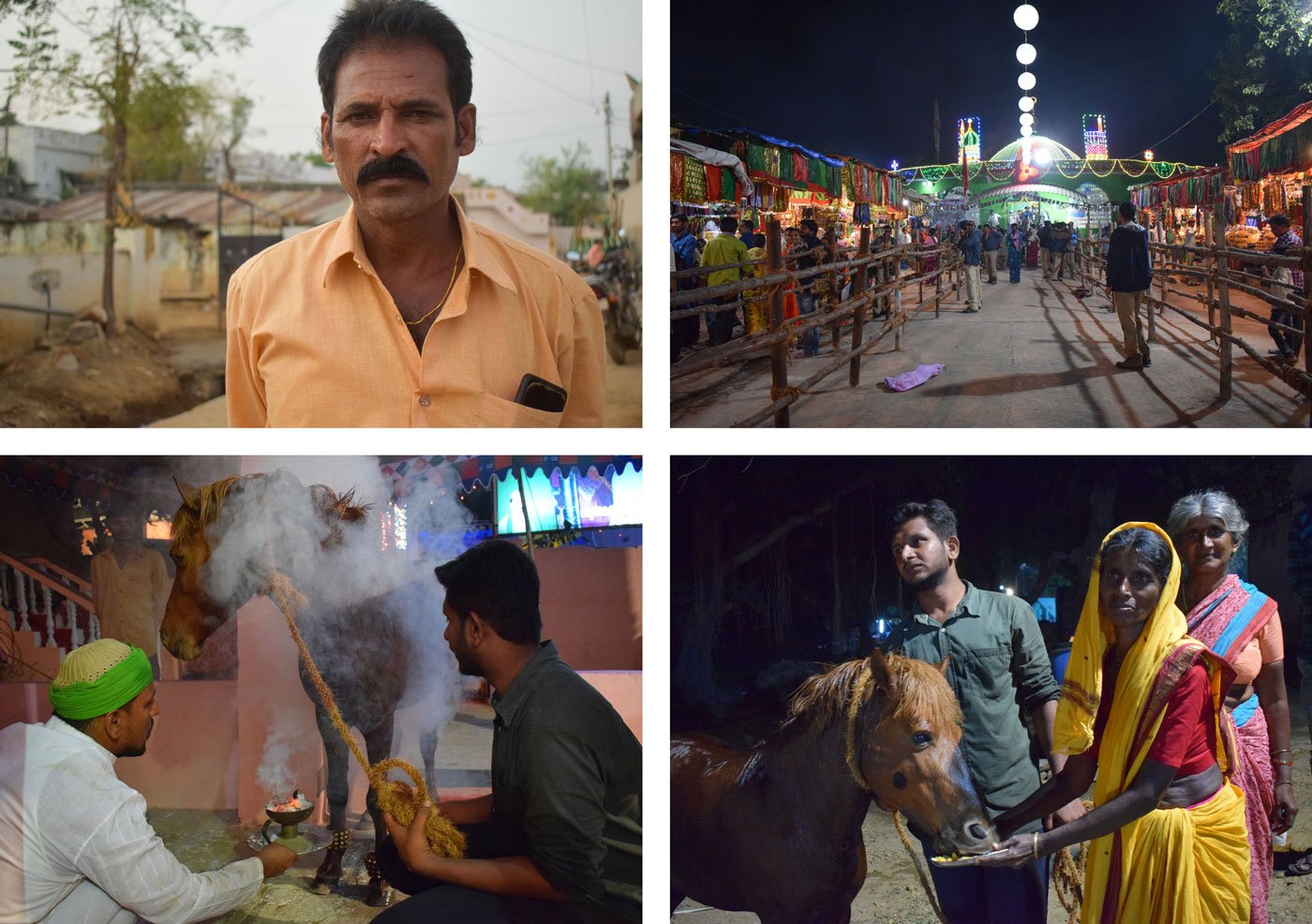 Top left: "Our main festival is the Urs,” says Bhukya Prakash, who belongs to the Lambadi community, a Scheduled Tribe. Top right: This is the lane where visitors can easily get lost in the growing crowds. Bottom row: The horse is readied for the sandal procession; people feed the animals at the venue as a mark of devotion

“This [the Urs] is just the beginning,” says Saida Naik, the sarpanch of Keshavapuram gram panchayat , around 15 kilometres from the dargah . He is referring to every Friday after the Urs, until the next cropping season in June-July, when people continue to pour into Janapahad village for kanduru , to offer goats and sheep.

A fee of Rs. 1,200 per animal is collected for slaughtering, and for later offering a cooked meal at the shrine along with the reciting of holy verses. Many say they cannot afford this amount. The money is collected by the dargah maintenance authorities or by sub-contractors (who get the rights for slaughtering, for selling coconuts, distributing laddoos , and for many other lucrative activities). The contracts are auctioned by the state Waqf Board.

Apart from the fees that many cannot afford, visitors speak of the poor sanitation at the venue and the lack of toilets. “Ministers, MLAs, collectors and RDOs [revenue divisional officers] all visit the place. We have informed them many times, but things don’t change,” says Saida Naik. In the past, the local media too have reported irregularities in the dargah ’s operations and the severe lack of facilities.

Yet, visitors come here, year after year, irrespective of their caste and religion – driven by faith, by hope, and perhaps by the prospect of a delicious meal.