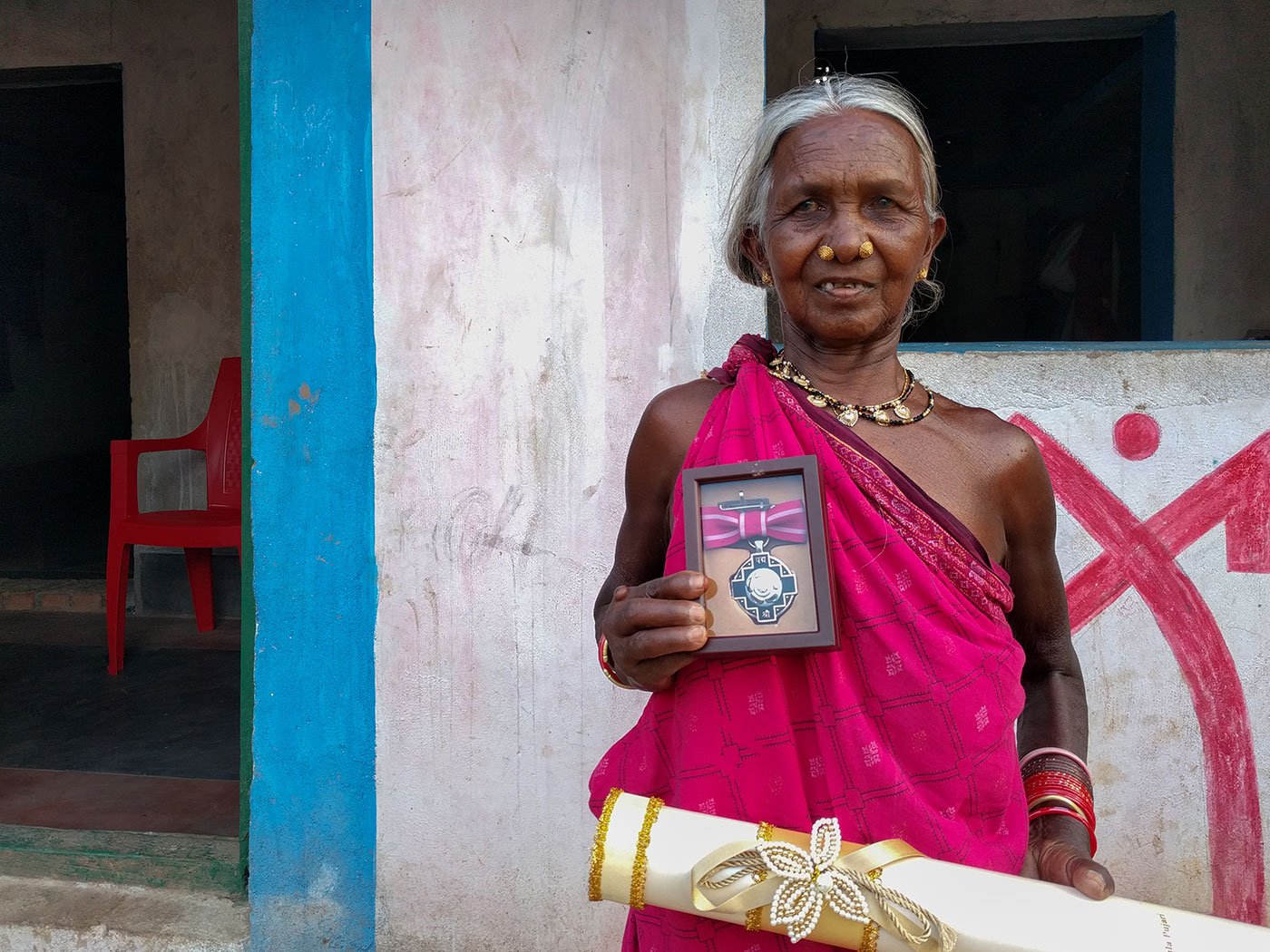 Earlier this year, Kamala Pujhari of Odisha's Koraput district received the Padma Shri for her work on seed conservation – an uphill task when many varieties of paddy in her village have vanished

“I was very happy. I said ' namaskaar '. He [the President] greeted me and said, 'Welcome to Rashtrapati Bhavan’,” says Kamala Pujhari, recalling her visit to New Delhi in March this year to receive the Padma Shri.

The award was given in recognition of Kamalaji’s work on seed conservation ( see the cover photo on top ). For her, it’s a journey that began over four decades ago when, after getting married, she moved to Patraput hamlet in Odisha’s Koraput district. At that time, she recalls, the villagers were cultivating around 15 indigenous varieties of paddy, and kalajira, gothia, haladichudi, umuriachudi, machhakanta, bhudei, dodikaburi and others were in abundance.

“Every family cultivated two or three types of paddy, different from each other,” she says. “At the end of the harvesting season, people exchanged seeds and grains. That way, the village had plenty of varieties.”

But around 25 years ago, the paddy varieties started dropping. “I noticed a decline in the cultivation of landraces [indigenous varieties]. I felt there was a need to protect them," says Kamalaji, who is in her late 60s and from the Bhumia Adivasi community.

The varieties reduced, Kamalaji says, because as joint families divided, smaller family units increasingly started using higher-yielding hybrids. But the shift was also promoted by policy. "All varieties are not procured at the mandi [the government procurement centre] as they do not meet their [‘fair average qualities’] standard,” says Kamalaji’s son Tankadhar Pujhari. “Sometimes, varieties like machhakanta , which are of fine quality,  can be sold at the mandi . But mostly, we cultivate machhakanta and haladichudi for household consumption, and ' sarkari dhan 1010’ [a new hybrid variety] for selling in the mandi ." 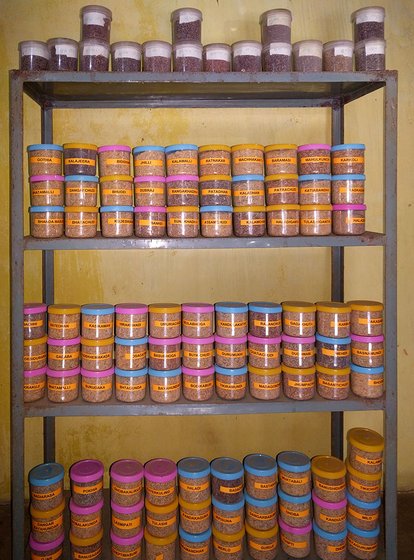 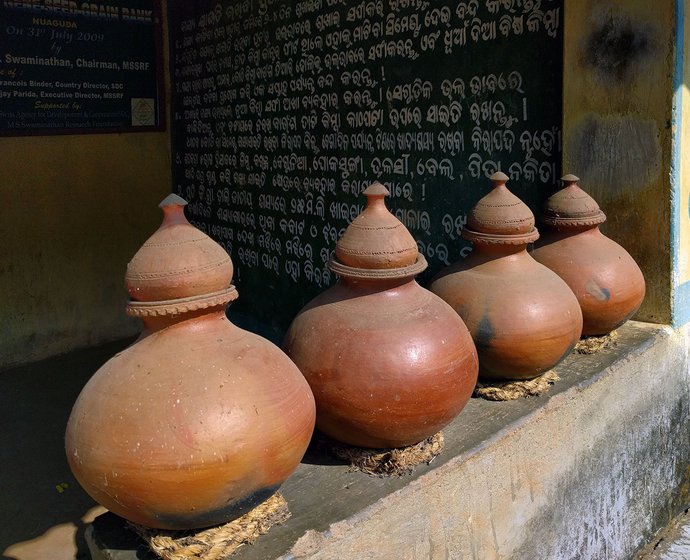 Many varieties of seeds and landraces have slowly disappeared from Koraput district, or are cultivated for special occasions on small plots. The others are now found only in seed banks like this one in Nuaguda village, which has 94 varieties of paddy and 16 of ragi

When she saw the landraces disappearing, Kamalaji began scanning villages within a 20-kilometre radius from Patraput, usually on foot, to collect seeds. “The routes were harsh, there was plenty of wilderness,” she recalls. Sometimes, she had to stay back in the villages where she went to collect seeds.

Kamalaji began storing the collected seeds at her house or sowing them on small patches of her family's two-acre land. Over time, she began storing them at a seed bank in Patraput set up in 2001 by the MS Swaminathan Research Foundation’s (MSSRF) branch in Jeypore, around 13 kilometres from her hamlet.

In most families in neighbouring villages, “only two varieties [ machhakanta and haladichudi ] are still being cultivated,” she says, when we meet in Patraput, a 119-household hamlet three kilometres from Kanjeipatraput village in the Dongorchinchi panchayat of Jeypore block. Of the village’s population of 966 (including the hamlet’s households), 381 belong to Scheduled Tribes.

In much of Kamalaji’s own two-acre field too, now cultivated mainly by her son Tankadhar, who is around 35, except for machhakanta and haladichudi on small patches, the family no longer grows traditional landraces. Tankadhar says they gradually shifted from local varieties to high-yielding hybrids over a decade ago. 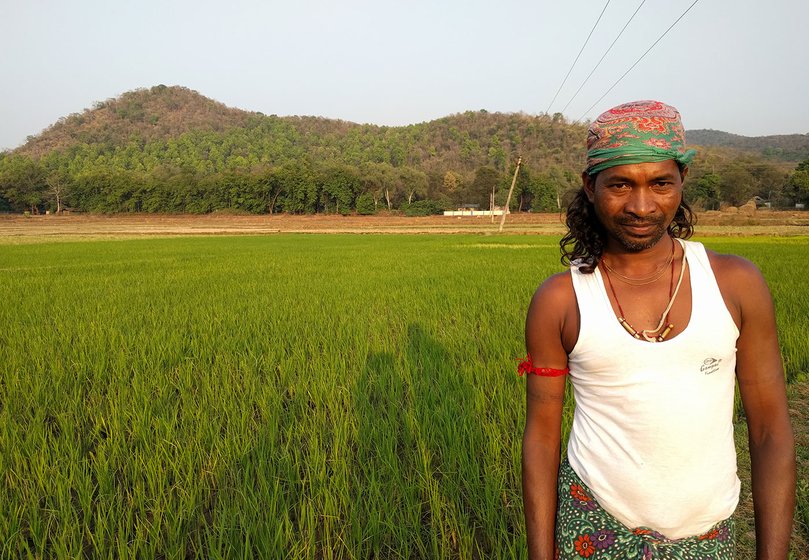 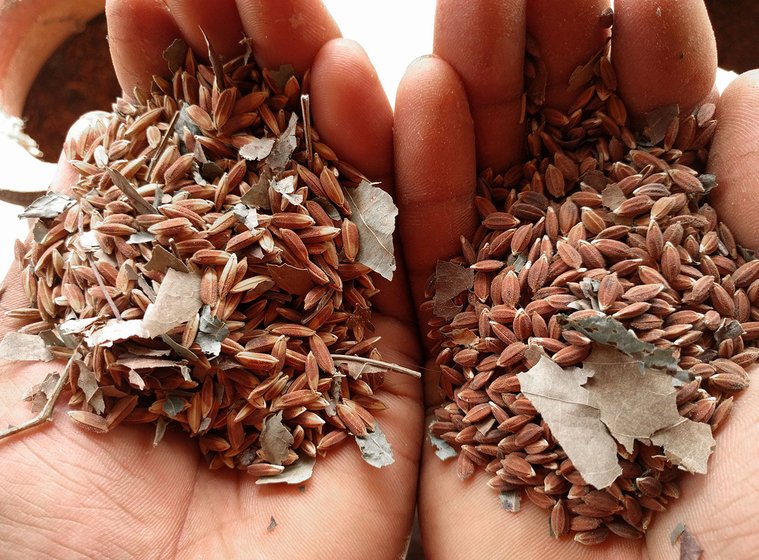 Left: 'Our income depends on how much we produce', says Tankadhar Pujhari. Right: Budra Pradhan shows us two paddy varieties

“Our income depends on how much we produce,” he says. “The yield from one or two traditional varieties goes up to 6-10 quintals. It is much less than what we get from high-yielding varieties [15-18 quintals]. How do I care for my family if the production is less? Besides, it is easier to sell one variety instead of many."

Still, alongside her own family’s compulsions, Kamalaji continued her seed preservation work, for which she has received awards. In 2002, she collected the 'Equator Initiative' award on behalf of the Adivasi communities of Jeypore. in Johannesburg. In 2009-10, on behalf of the Panchabati Gramya Unayana Samiti, (a rural development society set up in 2003 with help from MSSRF, of which Kamalaji was the vice president in the past), she received the ‘Plant Genome Savior Community Award’ set up by the Protection of Plant Varieties & Farmers’ Rights Authority (PPVFRA).

This award is given annually on the basis of applications received from farmers or community-based organisations for an established record for conserving plant agro-biodiversity. The PPVFRA is a government of India entity, set up under the Department of Agriculture in November 2005 to implement the PPVFRA Act of 2001. The Authority grants rights to breeders and farmers who have preserved, bred, evolved or developed landraces.

But neither the Padma Shri nor the PPVFRA award have helped Kamalaji in getting rights over the seeds she once cultivated and is now conserving. She did not even know of the PPVFRA and that she could claim rights. The rights over kalajira, for example, are with Jogendra Sahu from Harichandrapur, Odisha, since October 8, 2013 (and will remain with him till October 7, 2028). Jogendra’s application for rights on kalajira was advertised in June 2013 in the Plant Variety Journal of India . The Act says Kamalaji or any other farmer or community, who think they have rights, should have filed an opposition to the claim within three months. 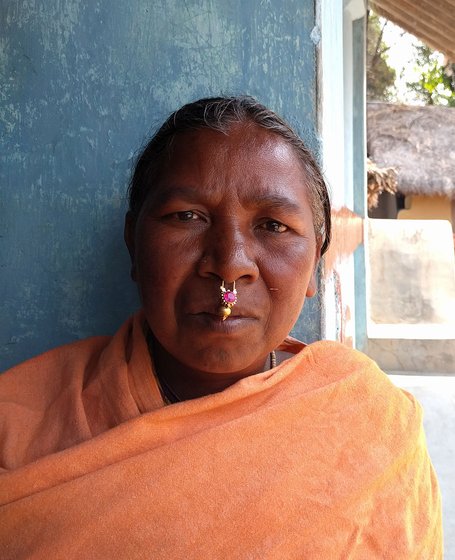 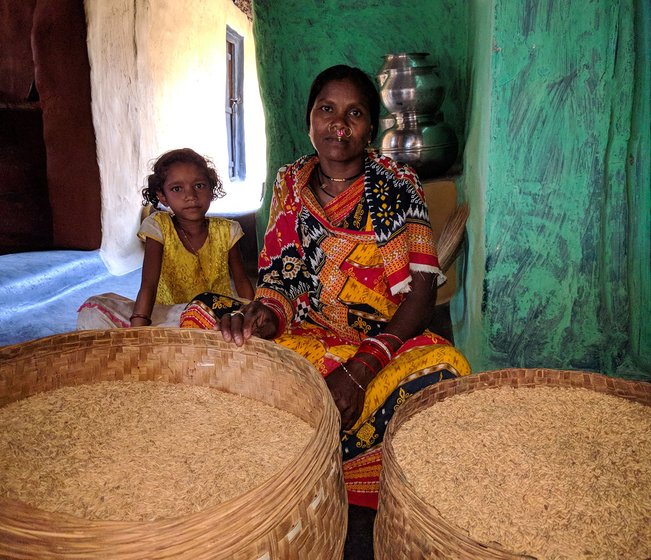 Left: Chandramma Masia of Nuaguda hamlet says her family too switched to an ‘improved’ variety from desi dhan. Right: Rukmani Khillo cultivates muktabali on half acre and machhakanta on two acres for local festivals

But Kamalaji does not read the journal. In fact, many farmers do not know of the PPVFRA or that they can claim rights to seeds they have been using for years. This means registration goes to whoever files a claim first. So Jogendra alone will enjoy the benefits of kalajira , if the variety makes commercial gains, for the next 9 years, at least. Till May 2019 the PPVFRA has issued certificates on 3,538 varieties – of which 1,595 are farmers’ varieties. The others are with private seed companies, research universities or individual commercial breeders.

Farm activists though point out that no individual farmer or community should have rights unless they have bred a new variety. “Seed thrives only if it is used in the fields consistently, season after season, and not otherwise [ by methods like rights and certification],” says Kamalaji.

Meanwhile, in the absence of robust cultivation, many varieties are vanishing. Chandramma Masia, 55, another Bhumia Adivasi farmer from Nuaguda hamlet of Limma village in Kundura block, around 35 kilometres from Kanjeipatraput, says her family too switched to an ‘improved’ variety from desi dhan (traditional varieties). “We got around 18-20 quintals [from this ‘improved’ variety]. Seeing the yield going up, farmers from other villages have been approaching me for seeds,” she says. Chandramma cultivates a 100-day upland landrace called pandkagura in half an acre only for her family’s consumption.

Similarly, 40-year-old Rukmani Khillo, an Adivasi farmer from the Paroja community, cultivates muktabali on half acre and machhakanta on two acres. “These can be harvested within 90 to 100 days from sowing day [as compared to 120-140 days for longer duration varieties], and there is a good demand for these short-duration varieties among farmers, locally,“ says, Rukmani, who is from Jholaguda hamlet of Limma village. 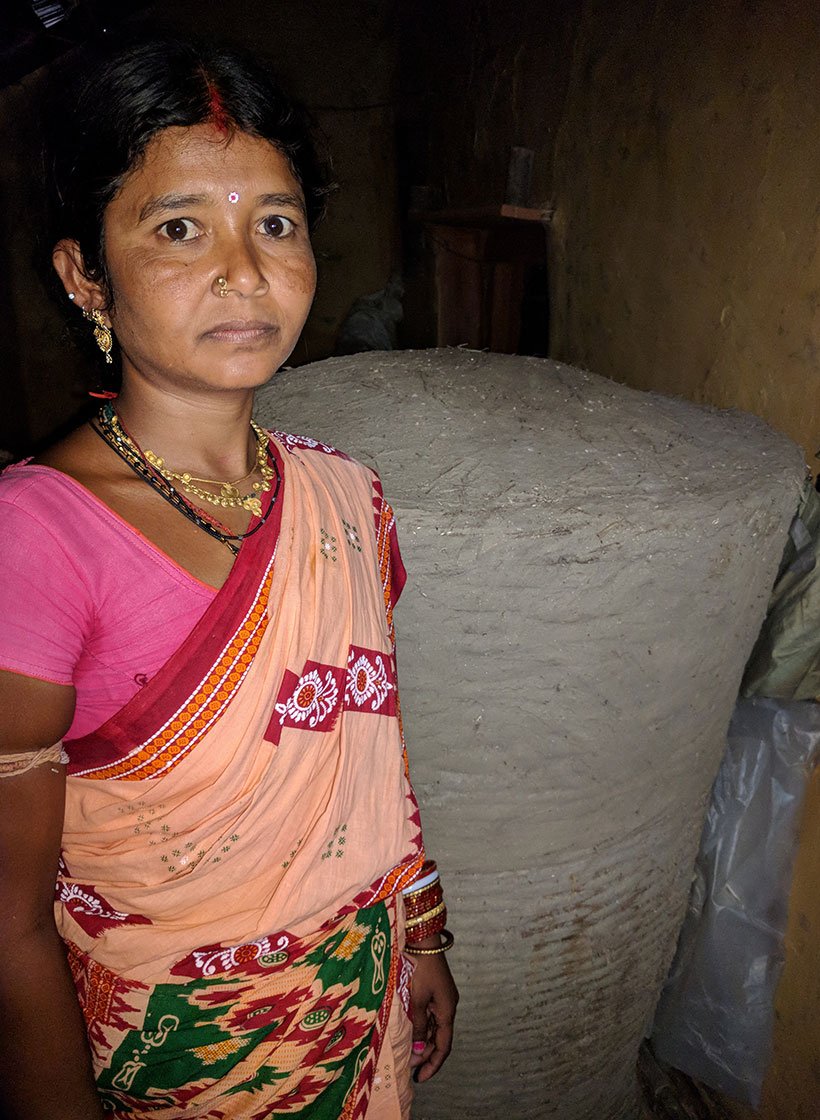 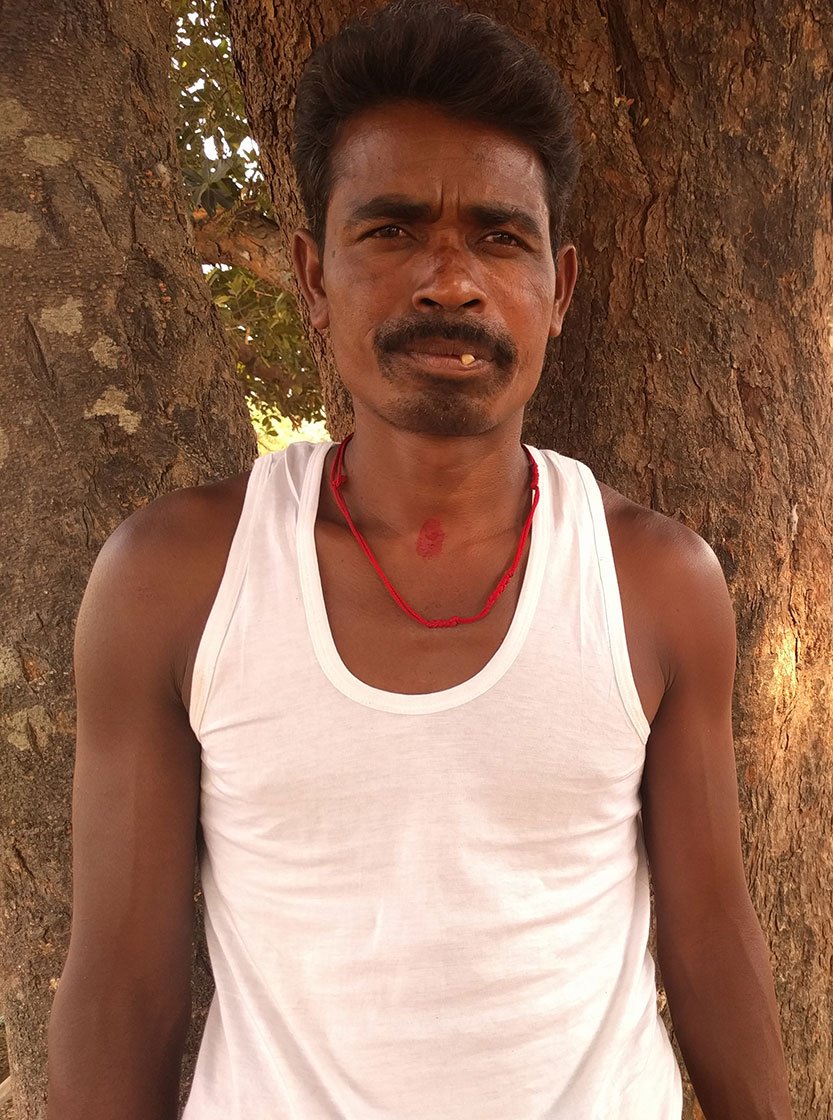 Left: Raimati Ghiuria has packed kalajira in a basket for the sowing and the Nuakhai festival. Right: “We have our first meal of the year cooked from grain harvested that year, after submitting the food to our village goddess," says Damu Paroja

And Kamalaji’ daughter, 42-year-old Raimati Ghiuria, cultivates just landraces on her family's six acres in Nuaguda, a hamlet around 35 kilometres from Patraput.. This year she has cultivated kalajira, machhakanta, haladichudi, gothia, dangar and bodikaburi . “Of the six acres, produce from two acres is enough for our family of 10. We sell the rest [to local farmers]. All these are short duration varieties,” says Raimati.

The short-duration varieties sell locally because they are central to an Adivasi festival, Nuakhai, celebrated for a few days around September-October. “We have our first meal of the year cooked from grain harvested that year, after submitting the food to our village goddess, Gaon Budhi Thakurani. That day, we do not eat machine-processed grain but eat hand-ground grain,” says Damu Paroja, 38, who belongs to Paroja Adivasi community and is from Kundura village in Kundura block.

All the other indigenous varieties are stored in seed banks – there are three community-run banks in Patraput, Nuaguda and Jholaguda villages (set up by MSSRF). “We have 94 paddy and 16 ragi varieties in the Nuaguda seed bank. Every year, all these are planted in a conservation plot. This year we have gathered more varieties from different places and increased the paddy number to over 110,” says Budra Pradhan, 25, a community resource person in the state government’s Odisha Millets Mission.

“In agriculture, seed has to be sown, grown, collected, stored, distributed. Of all the activities, I like distributing seeds to people. Even if I lose what I have, they will be safe with someone else,” says Kamalaji.  “The government’s support will take us a long way in protecting our seeds. I request their support in preserving the landraces for our future.”

Her son Tankadhar adds, “From next year, I'm switching to local varieties. Many people who come to visit my mother have been asking: how can you cultivate sarkari dhan when your mother got award for conserving landraces."