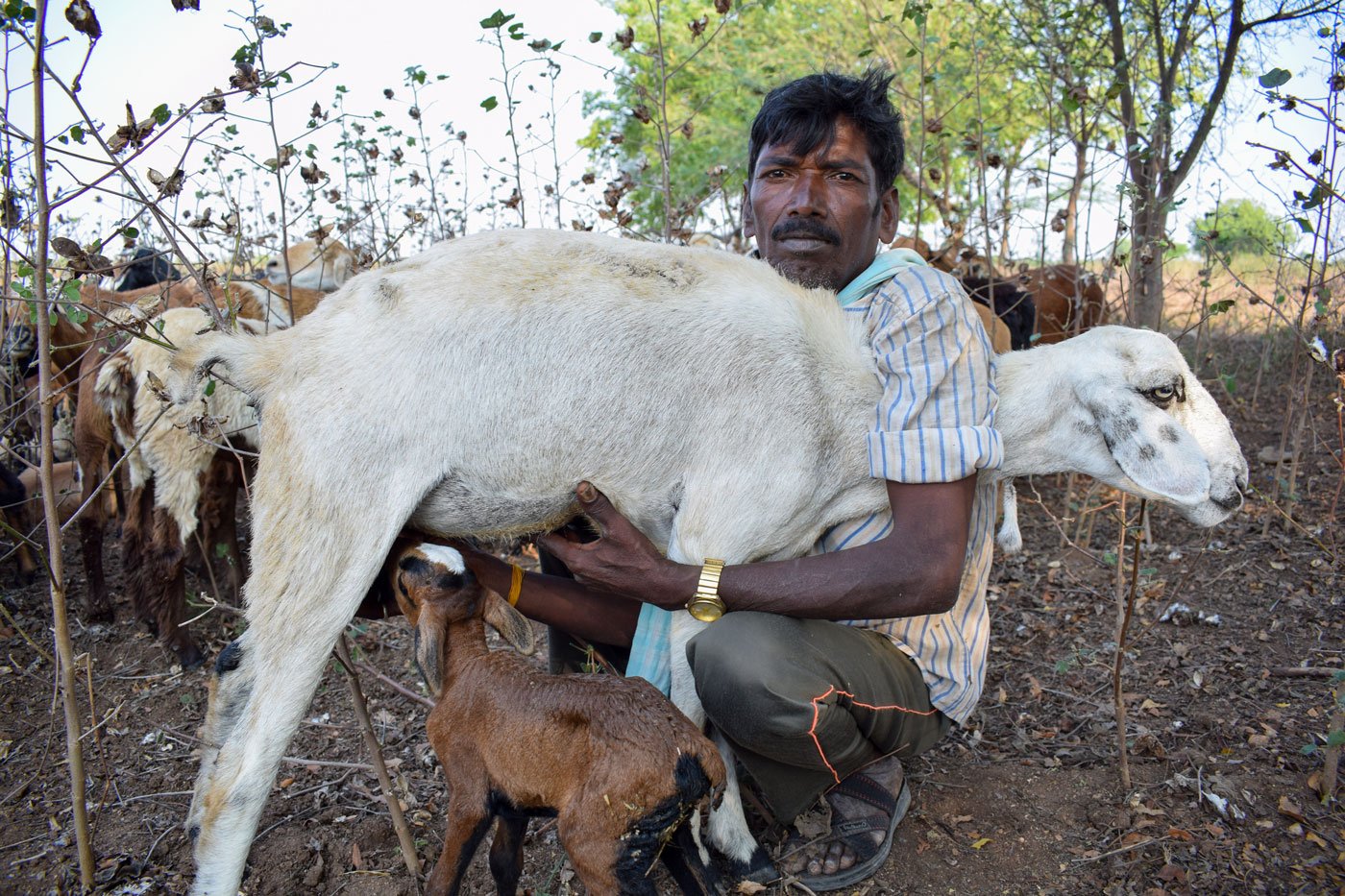 With the COVID-19 driven lockdown, Chenakonda Balasami and other pastoralists in Telangana, on the road for months, are finding it difficult to access food and new grazing grounds – or return to their villages

“How are you? What are you doing? How many days is this going to last?” Chenakonda Balasami asks his son on the phone. “Is it that extreme? Are police there at our place? Are people [agricultural labourers] going out for work?”

Balasami left his village Kethepalle, in Telangana’s Wanaparthy district in November, after Diwali, along with four other herdsmen. He is the caretaker of roughly 1,000 goats and sheep (he does not own any himself), and has been travelling ever since in search of fodder for the animals.

He and the other herders – all from the Yadava community of pastoralists, listed as OBC in Telangana – had reached Koppole village, some 160 kilometers from Kethepalle on March 23, two days before the country went into a lockdown to counter the spread of Covid-19.

In Koppole, a village in Gurrumpode mandal of Nalgonda district, after the lockdown, it has been difficult for them to buy rice, dal , vegetables, oil and other provisions that they typically do in small quantities every few days.

With the suspension of public transport services and uncertainty about the lockdown, the herders are finding it difficult – it’s almost impossible, they say – to purchase medicines for the livestock, to occasionally visit their own villages and families (as they usually do), recharge mobiles and find new grazing grounds for the flock. 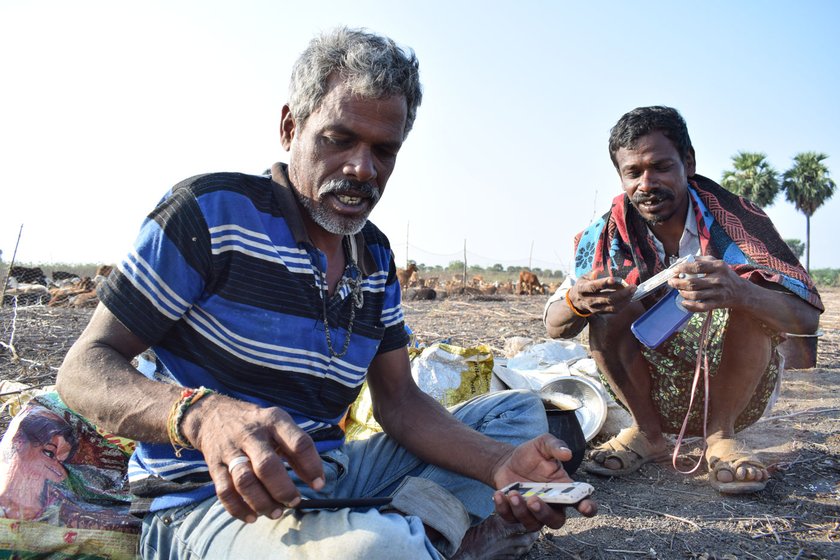 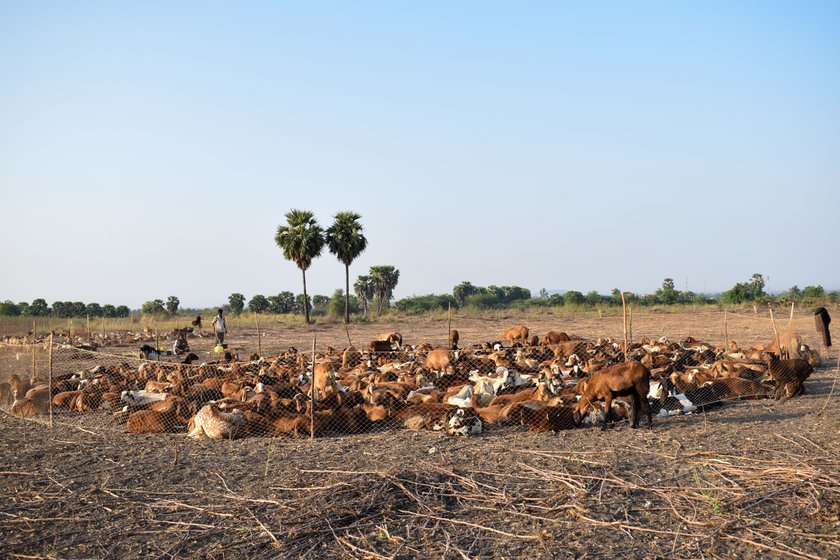 Chenakonda Balasami (left) , his brother Chenakonda Tirupatiah (right) and other herdsmen have been on the move since November, in search of fodder for the animals – that search cannot stop, neither can they move during the lockdown, nor can they return home

“Those in villages can manage [isolation]. How can those wandering like us deal with this situation?” asks Balasami, who is probably in his late 40s.

“We are not being allowed into the village to buy vegetables,” says Chenakonda Tirupatiah, another herdsman, and Balasami’s brother.

Fortunately, the owner of the land where their flock is grazing and waiting has been helping them with rice, dal and some vegetables.

But they will soon have to find another grazing field. “We came here four days ago,” Tirupatiah says. “There is not much fodder here. We have to look for new places.”

The pastoralists’ long journeys on foot are always arduous – and have become even harder now. They walk for several kilometres looking for suitable grazing lands, and then negotiate a deal with the landowner. This is an uphill task in an area with limited open land, where farmers might reserve tracts for their own goats and sheep. Now, with no transportation and travel restrictions, the herders’ search for fodder is even more difficult. 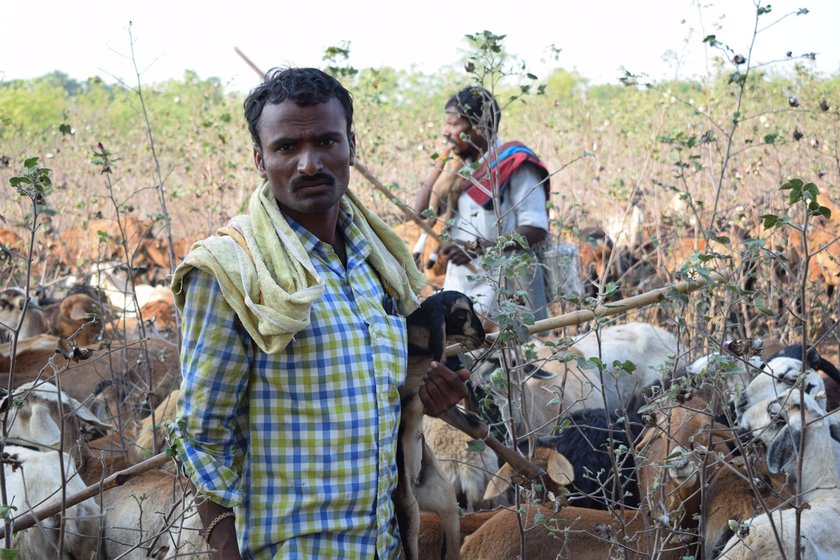 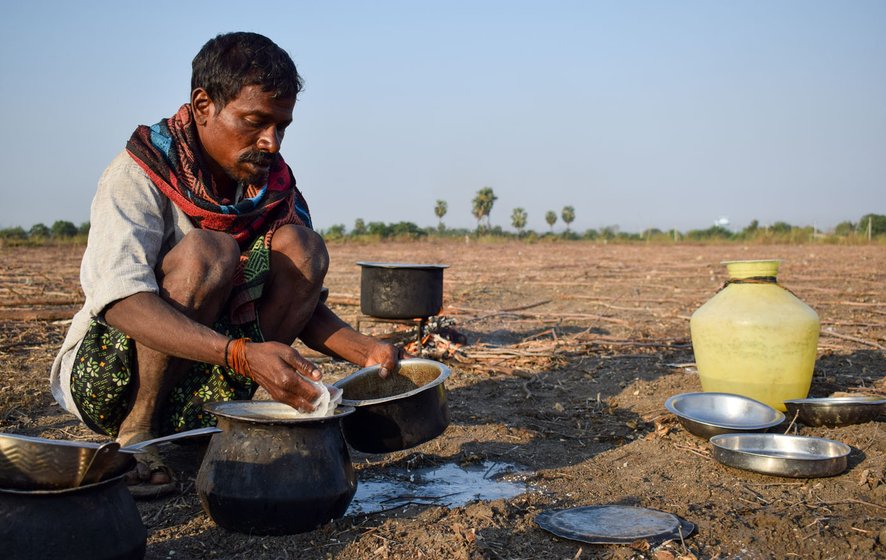 Left: Avula Mallesh and the other herders are not being allowed into the village to buy vegetables. Right: Tirupatiah preparing a meal with the rice, dal and vegetables given by the owner of the land where the flock was grazing

“We cannot even go on bikes,” says Balasami. At times, people from his village come on their bikes to where the herders are, and ferry them back to the villages or across some kilometres to look for grazing tracts. “It seems they [police] are hitting badly [people on bikes],” says Balasami, referring to the videos he has watched on his mobile phone.

Balasami was planning to go home this week to Kethepalle, his village in Pangal mandal . For his work as a herder, he receives Rs. 120,000 as annual salary from the owners of the animals. A visit back home is important not just to meet his family, but also to collect a part of his salary. Unable to travel back now, Balasami and the others will soon run out of money. “How can I meet my wife, children and mother? How can I buy uppu [salt] and pappu [ dal ]?” Balasami asks. “When do you think buses will resume?”

Sometimes, for cash, the herders sell one or two goats or sheep, but with the lockdown no one has approached them in the over a week. 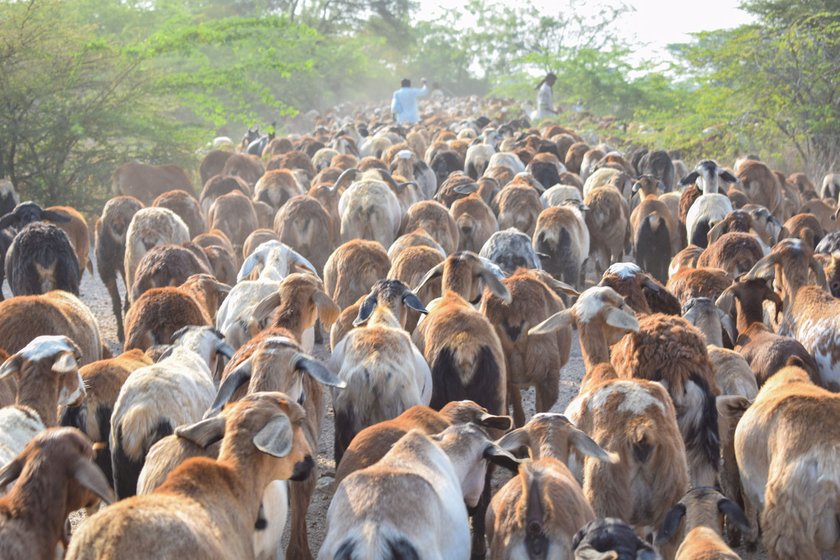 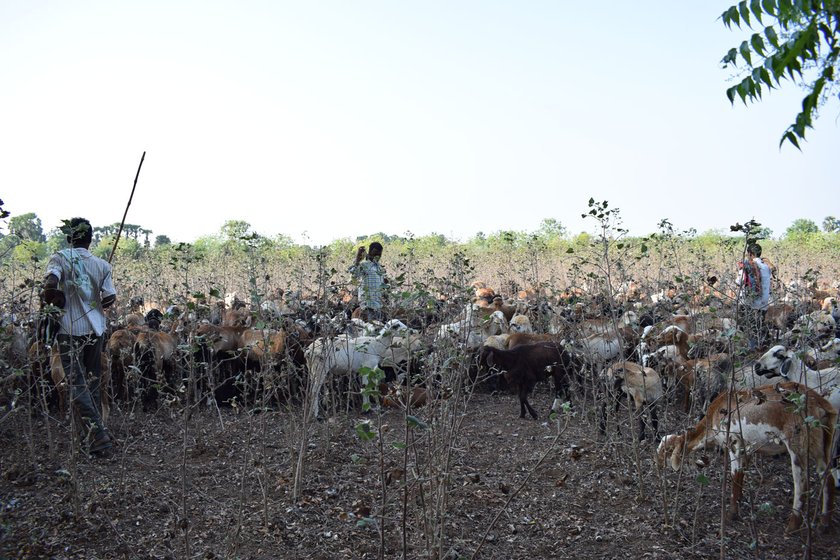 Left: The flock being herded away after a farm family wouldn't allow them to graze in their fields. Right: A harvested cotton field, with barely any fodder. The travel restrictions under the lockdown are making the herders’ search for fodder even more difficult

Usually, before travelling back to their villages, the herders reach Miryalaguda town, nearly 60 kilometres from where they are now, near Koppole village. The villages around the town have a lot of fodder during the paddy harvest in April. Without food and with travel restrictions, the journey to that last stop on the herders’ route now looks gloomy.

And since the animals have to be fed, the search for fodder cannot stop. Returning to their villages before the monsoon starts in June is not an option either, because there are few grazing grounds for the animals there. “There are many hills and hillocks in our region [which dry up by the end of October],” says Tirupatiah. “And there are too many animals – in our own village maybe nearly 20,000 goats and sheep. So we cannot avoid this journey.”

Balasami has been making every effort to inform his family of their well-being. “Are they going to shutdown phones [mobile services] as well?” he asks. “Then we will not even know if people are alive or dead. People are saying it [the lockdown] will last for three more months. If that’s the case, the lockdown itself will claim more lives than the actual disease.”