Waiting for the dust to settle

The people of Bhelonilodh – across caste and gender lines – are tired of the dust from a central road in their village, and desperately want it to be repaired and tarred

The men had cut tree trunks and placed them on the road. There were around 70-80 of them. They had met the night before to plan the protest against the broken road, full of pot-holes, which connects their village,  Bhelonilodh of Lalitpur district in Uttar Pradesh to Lalitpur town (around 40 kilometres to the south) and Jhansi city (around 90 kilometres to the north). They had protested before by writing letters, meeting government officials – this was the first time they were blocking the road.

The previous evening, Rajabeti Vanshkar, 25, had heard about the protest from the other women in the village. All morning, she had her ears tuned for sounds, but didn't hear much. Rajabeti is from the Basor community, a Scheduled Caste, who live at a short distance from the dominant Lodhis (an OBC) in the village of around 1,900 people. She moved to Bhelonilodh from Jamla Jot village in Siddharthnagar district 12 years ago, and adds around Rs. 1,000 a month to the family income by weaving bamboo baskets.

That day, long after her eight-year-old son and five-year-old daughter had gone to school, and husband had gone for farm labour, she heard something. “Around 11-12 am, I heard victory cries and chants of zindabad. Later in the afternoon, when I met the other women at the handpump, I found out from tayee [Meera Devi] what had happened. The sub-district magistrate sahiba had promised to get the road built in two days,” Rajabeti recalls. 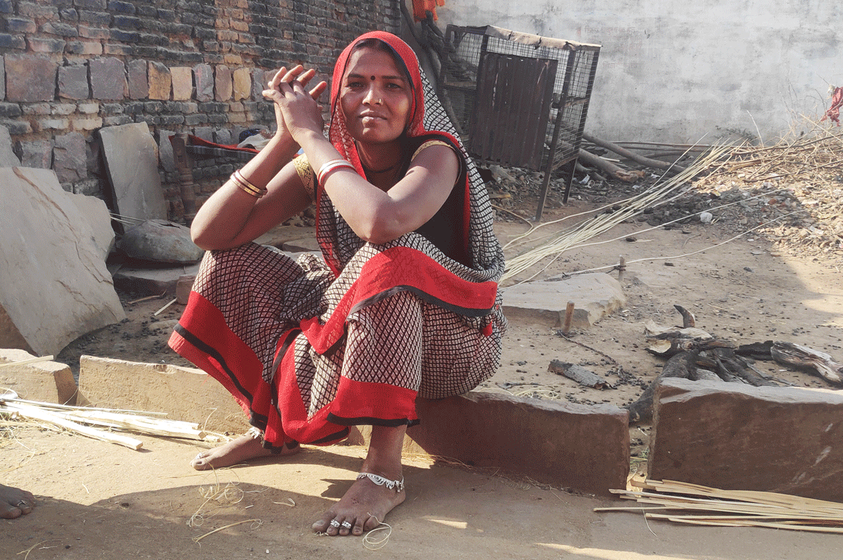 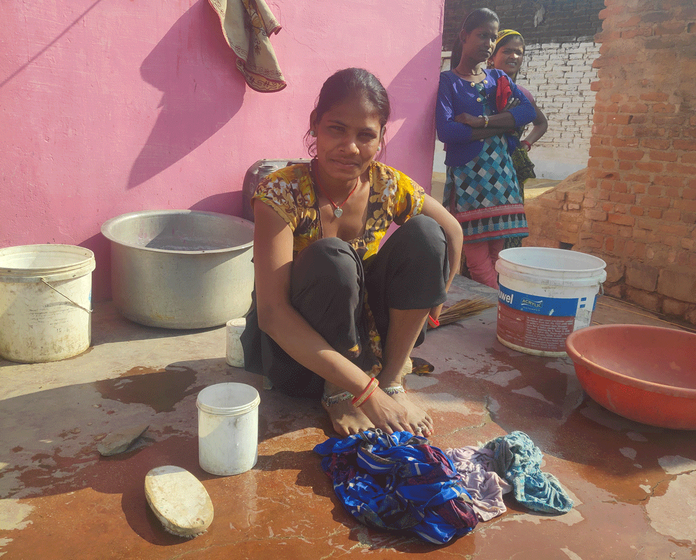 Rajabeti (left) and Sandhya (right) didn't venture out to protest, but both hope a tarred road will finally pass through their village

Meera Devi Vanshkar’s is the first Basor house in the village, around 100 metres from the end of the row Lodhi houses. Some windows in her house overlook the village centre where the men had gathered to protest.  She peeped from the kitchen window. “The men were sitting on the road, not letting any vehicles pass and then madam came,” says 51-year-old Meera Devi. “There was some talk and then she left. I came to my door and the boys outside told me that the protest was called off because the road will be built in two days. I hoped that’s true,” she says.

“Bekaar se bekaar gaon sudhar gaye [the worst villages are now better],” Sandhya Vanshkar, 23, says, “but look at ours. I wash clothes outside and the dust sticks to them. I have to use a veil because of the dust. The dust also sticks to the bamboo baskets we make here.” Sandhya’s father and two brothers are labourers, while she and her mother look after the house and earn a bit from making bamboo baskets.

The three women desperately want the road to be built, not because the bumpy, jolting ride bothers them (they usually only walk) but because they are tired of the dust that flows from the untarred road. 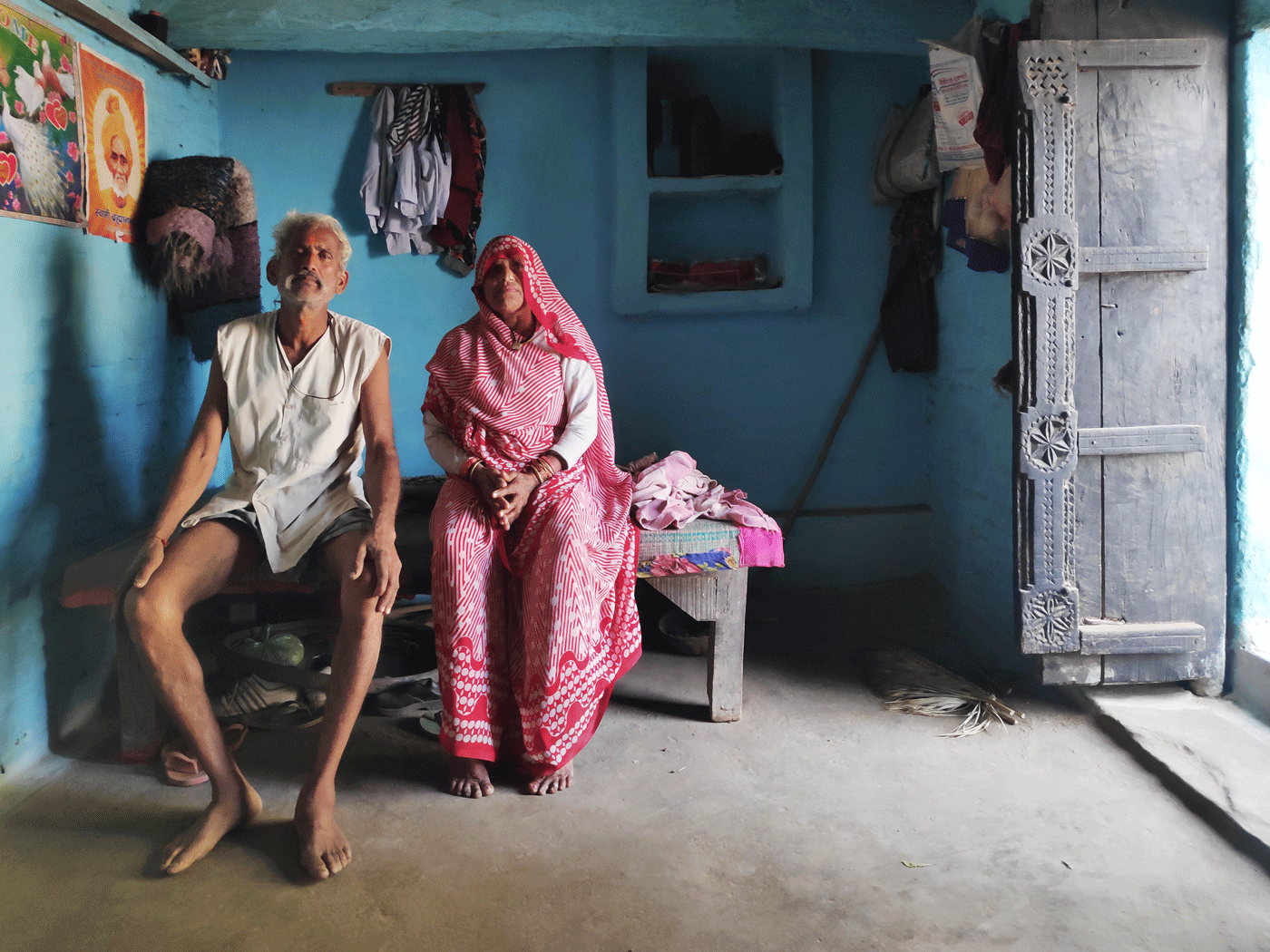 After the protest was called off, some men stayed outside to chat. Nanhibai Lodhi, 53, came to her door to call her husband Kehar Singh, 60, for lunch. A few months ago, as Kehar Singh was walking on the road, loose gitti ( grit or pieces of stone) from the poorly-built road were flicked out by a vehicle, and hit him. “I request him to be careful since then,” Nanhibai says. While there is no visible bruise, Kehar Singh complains of pain. “There's dust everywhere,” Nanhibai continues. “In the water. In the food. Our outside room [which faces the road] is practically unusable. There's keechad (dirt) in eyes, my eyes water, I sneeze, both my husband and I have problems breathing.” Their two daughters are married and two sons, 32, and 30, live and work in Delhi, where, Nanhibai hears, “the situation isn’t that much better. But that’s a big city, why should our village be so polluted?”

Despite her anguish, Nanhibai didn’t go out when the men were protesting. “Women don’t get out of their houses,” she says. “In any case, we all want the same thing: a new road.” She too heard that the sub-district magistrate’s arrival ended the protest. “She has promised to get the road built and maybe she will, because she looks like an honest officer,” she says, “If the problem persists, I will ask them to write to the PWD (Public Works Department). All villages can be improved, why can’t our village improve? Perhaps even I’ll go out on the road…”

Sandhya is not sure about venturing too far out: “The bade aadmi [big people; older men] sit there at the athai [village centre]. We don't go there.” Rajabeti adds, “I don’t know if anyone will stop us from going there, but we’ve never tried. All we want”, she sighs, “is freedom from this dust.”

The protest occurred on a Sunday morning in December 2018. The road has still not been built. 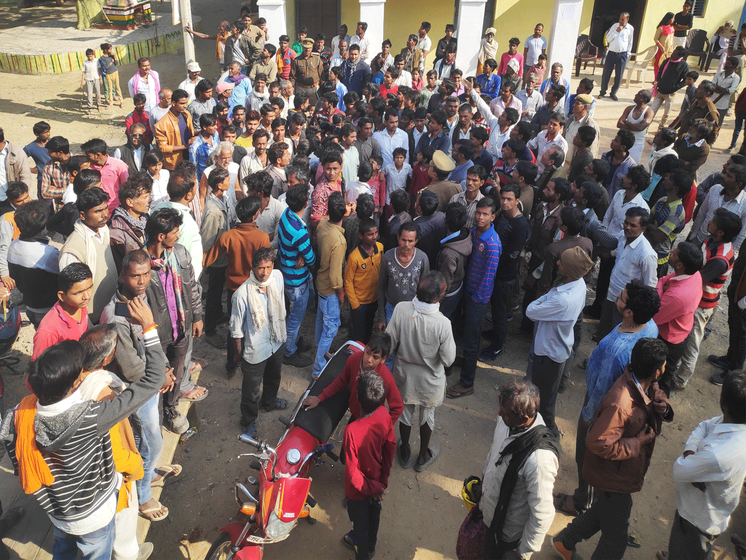 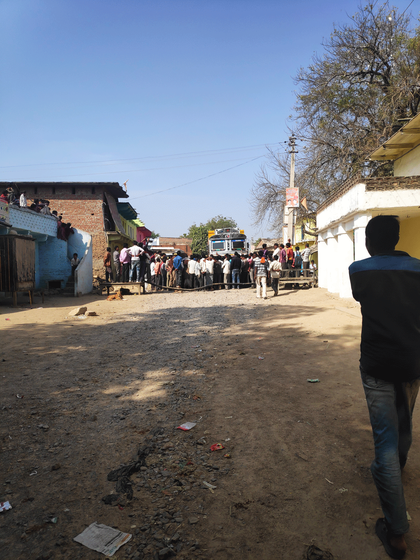