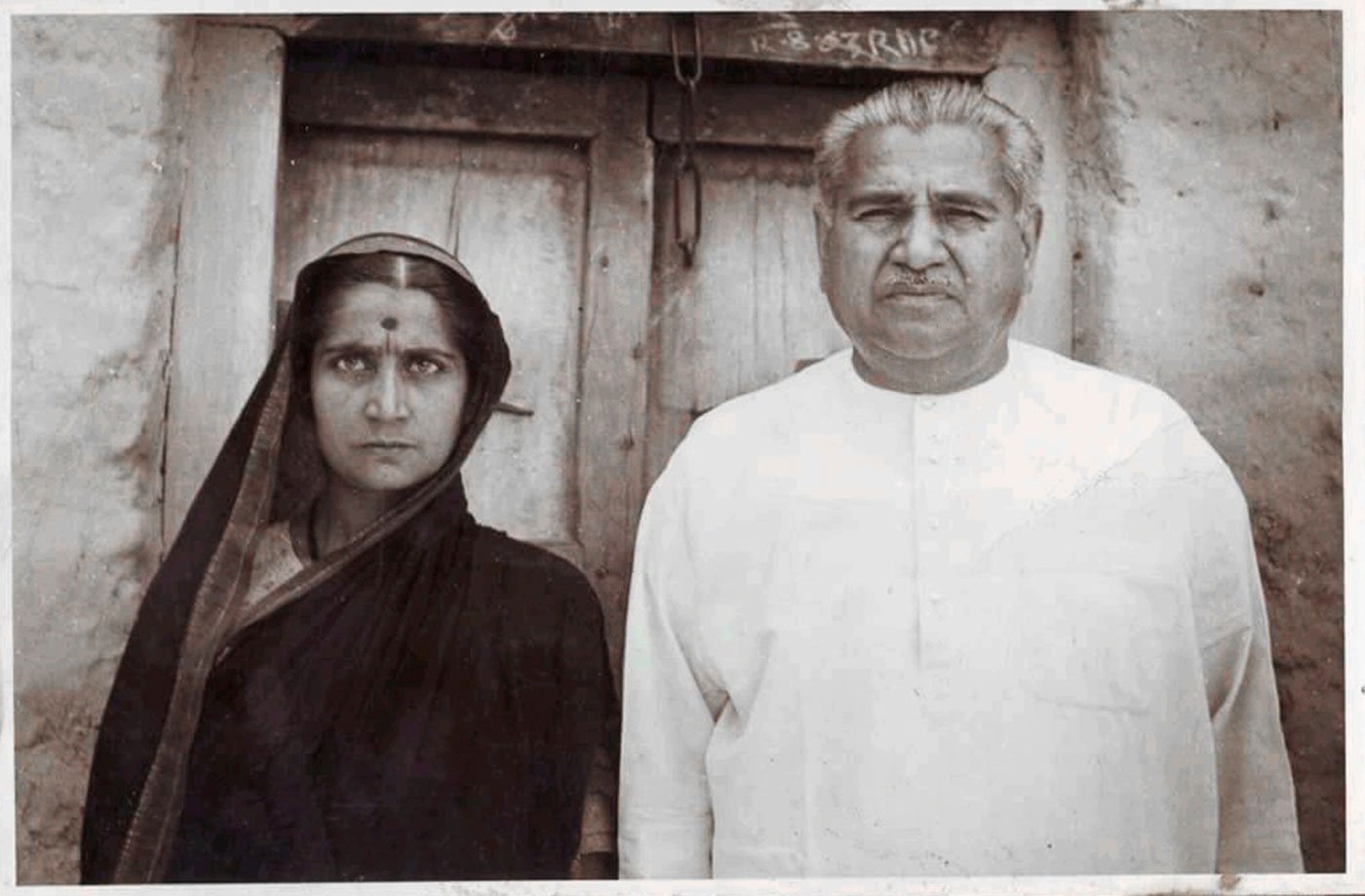 The unsung heroism of Hausabai

Hausabai Patil, now 91, was with the revolutionary underground that carried out audacious attacks on British offices, and looted armouries, buses and police stations in the Satara region in Maharashtra from 1943-46

It did not matter to him that he was attacking his wife in front of a police station. Hausabai Patil’s drunken husband began thrashing her mercilessly. “My back started to ache with all the beatings,” she recalls. “This was in front of the small police station at Bhavani Nagar [in Sangli].” But only two of the station’s four policemen were present.  “Two had gone out to lunch.” Then her inebriated husband “picked up a large stone. ‘Now I will kill you right here with this stone’, he roared.”

That brought the two policemen inside the station rushing out. “They tried to diffuse our fight.” At this point, Hausabai was trying to explain to her brother, also present at the scene, that she did not want to return to her abusive husband’s home. “I said I won’t go, I won’t. I will stay here, you give me a small space next to your house. Instead of going with my husband to a sure death, I will stay here and survive on whatever I get…I don’t want to suffer his beatings any more.” But her brother turned down her pleas.

The policemen counselled the couple at length. Finally, they escorted the reconciled pair and put them on a train to their village. “They even bought our tickets for us and put them in my hand. They told my husband – now if you want your wife to be with you, treat her properly, take care of her. Don’t fight.”

Meanwhile, Hausabai ’s comrades had looted the police station, lifting all the four rifles it had; the very reason why she and her fake ‘husband’ and ‘brother’ had staged the literally painful drama to distract the cops. That was in 1943, she was 17, married three years, and with a young child, Subash who she left behind with an aunt when out on anti-British Raj missions. She’s still annoyed, nearly 74 years later, with the fake husband for beating her so hard to make their spat appear genuine. Now 91, she’s telling us her story in Vita, in Maharashtra’s Sangli district “My eyes and ears pose a challenge for me [at this age], but I will tell everything myself.”

Watch video: Hausatai narrates the story of her life as a formidable freedom fighter

'I couldn’t fall asleep on the box, we couldn’t let the box sink. I could swim in a well, but this river was flowing water. That Mandovi river is not a small one'

Hausabai Patil fought for this country’s freedom. She and her fellow actors in that drama were part of the Toofan Sena (typhoon or whirlwind army). The Sena was the armed wing of the prati sarkar or provisional, underground government of Satara that declared independence from British rule in 1943. With its headquarters in Kundal, the prati sarkar actually functioned as a government in the nearly 600 (or more) villages under its control. Hausabai ’s father, the legendary Nana Patil, was the head of the prati sarkar .

Between 1943 and 1946, Hausabai  (more often called Hausatai; 'tai' is a respectful reference in Marathi to an elder sister) was part of teams of revolutionaries that attacked British trains, looted police armouries, and set ablaze dak bungalows. (In those times, these were post offices, rest houses for official travellers and even, sometimes, makeshift courtrooms). In 1944, she also took part in underground action in Goa, then under Portuguese rule, floating across the Mandovi river atop a wooden box at midnight, accompanied by comrades who swam alongside. But, she insists, “I did some little small work in the freedom struggle along with [my cousin] Bapu Lad. I did not do anything big or great.”

“My mother died when I was three,” she says. “My father at the time was already inspired by the struggle for independence. Earlier, too, he had been guided by the ideals of Jyotiba Phule. And also, subsequently, by Mahatma Gandhi. He quit his job as a talati [village accountant] and joined the struggle [full-time]... The aim was to bring our own government. And to [strongly] damage the British government so we could be rid of it.”

Warrants were out for Nana Patil and his associates. “They had to do their work underground.” Nana Patil moved from village to village, making powerful speeches inspiring people to revolt. “[Then] he would again go into hiding. There were about 500 people with him and they all had warrants in their names.” 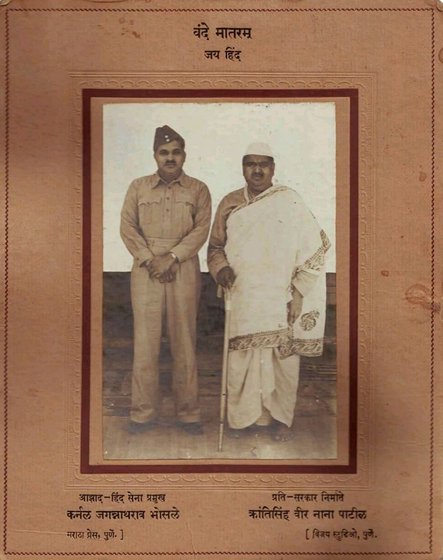 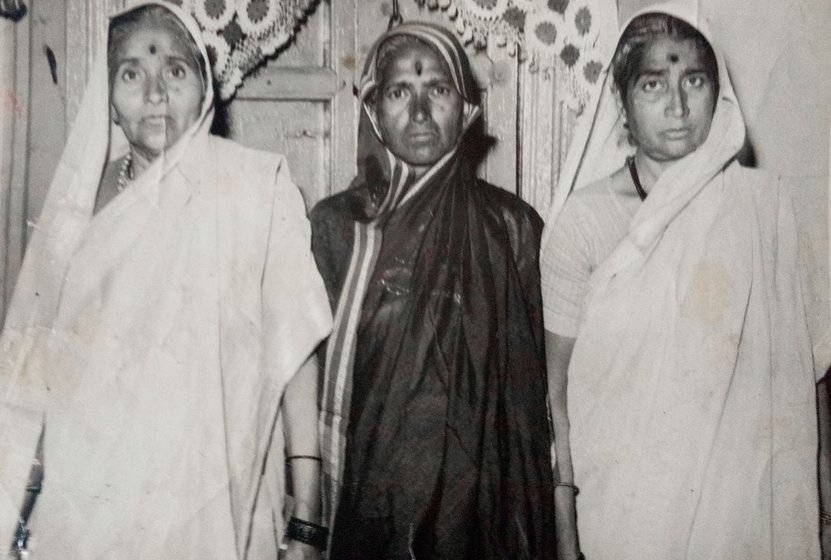 Left: Hausabai’s father Nana Patil in a photo from the 1940s with Col. Jagannathrao Bhosle (in uniform) of the ‘Azad Hind Sena’ (a force inspired by Netaji Subash Chandra Bose). Right: Hausabai (right) with her sisters-in-law Yashodabai (left) and Radhabai (centre) in a photograph taken sometime after Independence

There was a price to be paid for such audacity. The British confiscated Nana Patil’s farm and property. While he remained underground– his family suffered greatly.

“The government then sealed our home. We were cooking – there was bhakri and brinjal on the fire – when they came. There was just one room left for us. My grandmother, me, my aunt… so many of us lived there.”

The British tried to auction the confiscated properties of Hausabai ’s family, but found no takers. As she recalls: “Every morning and evening there would be a dawandi – a village crier – who would call out: ‘Nana Patil’s farm is to be auctioned.’ [But] people would say, why should we take over Nana’s farm? He has neither robbed anybody nor committed a murder.”

However, “we could not till that land…[so] we had to do some rojgar for a living.  Do you understand what I mean by rojgar ? It means we had to work for other people.” But other people feared reprisals from the Raj.  “So we didn’t find any work in the village.”  Then, a maternal uncle gave them a pair of bullocks and a cart. “So we could earn something by renting out our bullock cart.”

“We would transport jaggery, groundnuts, jowar. If the cart went to Takari village, about 12  kilometres away from Yede Machchhindra [Nana’s village] we earned Rs. 3. If it went all the way to Karad [over 20 kilometres away], then Rs. 5. That’s all [we earned from the rental].” 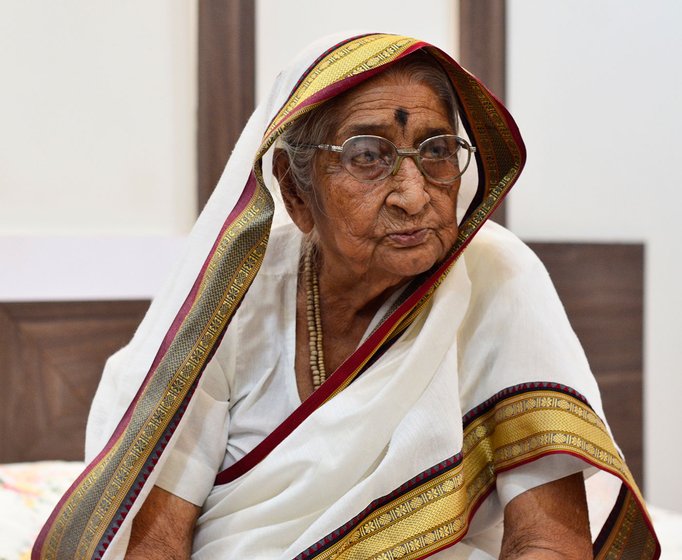 “My grandmother would dig out something from [the] fields. My aunt and I would feed the bullocks. Our cart [and lives] depended on them, so we had to feed the animals properly. The villagers wouldn’t talk to us. The grocer would not even give us salt, [saying] ‘get it from somewhere else’. Sometimes, we would go for pounding grain for some people, even if they didn’t call us – hoping to get something to eat at night. We would get umbryachya dodya [fruit of the ficus racemosa or Indian fig tree] and cook it to make a curry.”

Hausabai ’s job in the underground was mainly intelligence-gathering. She and others picked up information for attacks like the one at Vangi (in present-day Satara district) where a dak bungalow was set ablaze. “The task of finding out – how many policemen, when do they come and go – this was their work,” says her son, advocate Subash Patil. “Burning the bungalows was done by others.” There were many in that area. “They burned them all.”

Were there other women in the underground like Hausabai? Yes, she says. “Shalutai [the teacher’s wife], Lilatai Patil, Lakshmibai Naikvadi, Rajmati Patil – [those] were some of the women.”

Many of Hausabai ’s adventures were in the company of ‘Shelar Mama’ and the legendary revolutionary G.D. Bapu Lad. ‘Shelar Mama’ was the nickname of her comrade Krishna Salunki. (The original Shelar Mama was a famous 17th century Maratha warrior).

Bapu Lad, one of the top leaders of the prati sarkar and Toofan Sena, “was my cousin, my mother’s sister’s son,” she says. “Bapu would always send me messages – ‘Don’t sit at home!’ He and I used to work as brother and sister. And people don’t lose a chance to raise suspicions. But my husband knew that Bapu and I were truly like brother and sister.  And there was a warrant out in my husband’s name [as well]. When we went to Goa, it was only Bapu and me together.”

The Goa adventure was about freeing a comrade who had been arrested by the Portuguese police while transporting weapons from there for the Sena in Satara. “So, there was a worker, Bal Joshi, who was arrested while taking away weapons. He could have been hanged. Bapu said, ‘we cannot return until we get him released from jail’.” 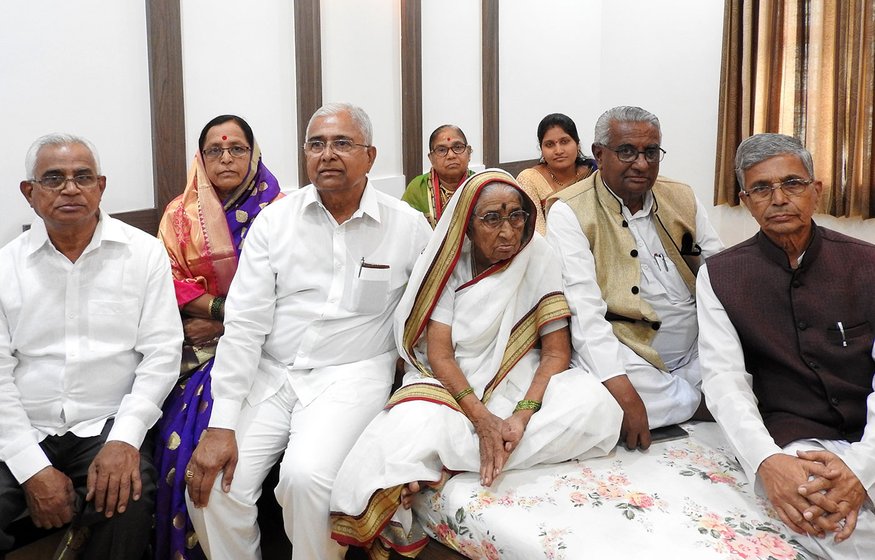 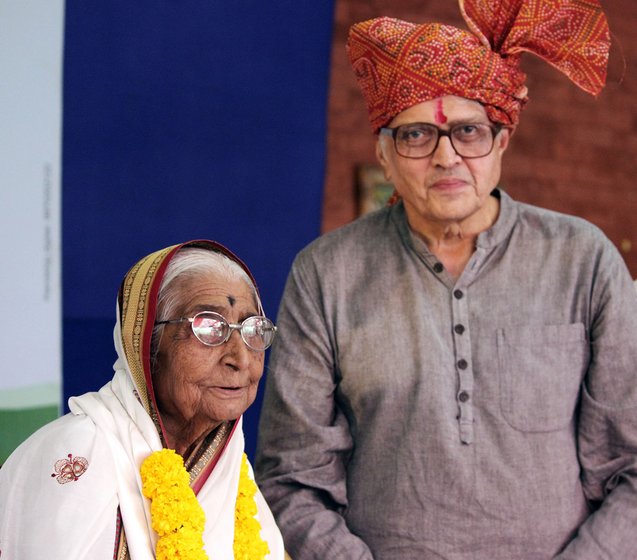 Hausatai with her family last year and (right) with Gopal Gandhi, former Governor of West Bengal – and grandson of the Mahatma – who came to Kundal to felicitate her and several other freedom fighters in June 2017

Hausabai met Joshi in jail, posing as his ‘sister'.  With an escape plan “written on a [small] paper I hid in my hair bun.” However, they also had to pick up weapons for the Sena, those that had not fallen into police hands. Now the return was risky.

“The policemen had all seen me and would recognise me.” So they chose road travel over the railways. “But the Mandovi river – there was no boat, not even a small fishing boat. Then we knew we had to swim across. Or we might get arrested. But how to go across? [We found] a big box kept inside a fishing net.” Lying on her stomach atop the box, she floated across the river at midnight aided by her comrades swimming alongside.

“I couldn’t fall asleep on the box, we couldn’t let the box sink. I could swim in a well, but this river was flowing water. That Mandovi river is not a small one. There were others [from our group] who were swimming… They tied dry clothes on their heads – to wear afterwards.” And so they crossed the river.

“[Then] we walked through the forest… for two days. Somehow, we found our way out of the wilderness. It took us all of 15 days to return home.”

Bapu and Hausabai did not collect the weapons themselves, but made arrangements for their transportation. Joshi succeeded in his jail break many days later.

Her eyes gleaming, Hausabai asks the PARI team as we wind up: “So, are you going to take me now?”

“To work with you all,” she says laughing.