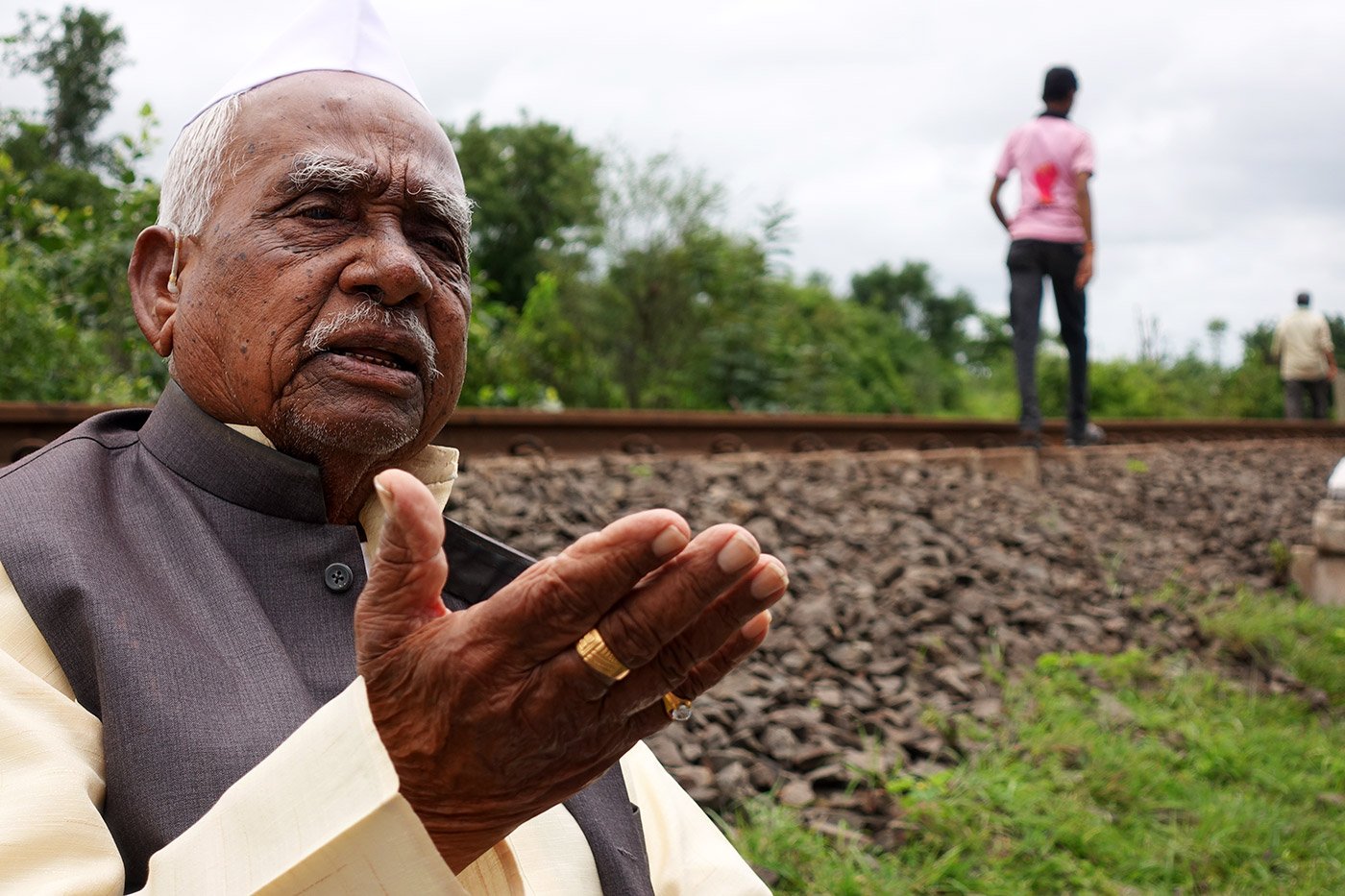 At 94, a forgotten hero of India’s struggle for freedom returns to the scene of his most daring exploit in the anti-British Raj uprising that saw a parallel government established in Satara, Maharashtra, in 1943

“Our squad attacked the train in two groups, one led by G.D. Bapu Lad, the other by myself. We stopped the train by piling up rocks on the track – right here where you are now standing. Then we piled up boulders behind it, so it could not retreat. We had no firearms, no weapons other than our sickles, lathis and a couple of unstable ‘country bombs’.  The main guard had a gun, but he was petrified and easily overpowered. We lifted the payroll and bolted.”

That was 73 years ago. But to hear  ‘Captain Bhau’ Lad tell it, it was yesterday. Now 94, Ramchandra Sripati Lad called ‘Bhau’ (brother or elder brother in Marathi) speaks with startling clarity about the attack he led on the Pune-Miraj train carrying the salaries of officials of the British Raj. “He hasn’t been this articulate in some time,” whispers Balasaheb Ganpati Shinde, a follower of the old freedom fighter. But memories come alive for the nonagenarian everyone calls  ‘Captain Elder Brother’ as he stands by the very spot on the track where he and Bapu Lad had led the  daring Toofan Sena  raid of June 7, 1943.

This is the first time he has returned to this site, at the village of Shenoli in Satara district, since that battle. For some moments, he is lost in his own thoughts, then it all comes back. He remembers the names of his comrades on the raid. And wants us to know: “The money did not go to any individual’s pocket but to the prati sarkar [or provisional government of Satara]. We gave that money to the needy and poor.”

“It is unfair to say we ‘looted’ the train,” he says with asperity. “It was money stolen [by the British rulers from the Indian people] that we brought back.”  His words echo what G.D. Bapu Lad told me in 2010, a year before he died.

The Toofan Sena  (whirlwind or typhoon army) was the armed wing of the prati sarkar – an astonishing chapter in India’s struggle for freedom. Springing up as an armed offshoot of the Quit India movement of 1942, this group of revolutionaries declared a parallel government in Satara, then a huge district that included present-day Sangli. Their sarkar, seen as a legitimate authority by the people of the region and in at least 150 villages – over 600, insists Captain Bhau – effectively overthrew British rule. “What do you mean underground government?” growls Captain Bhau, annoyed by my use of the term. “We were the government here. The Raj could not enter.  Even the police were scared of the Toofan Sena . ” 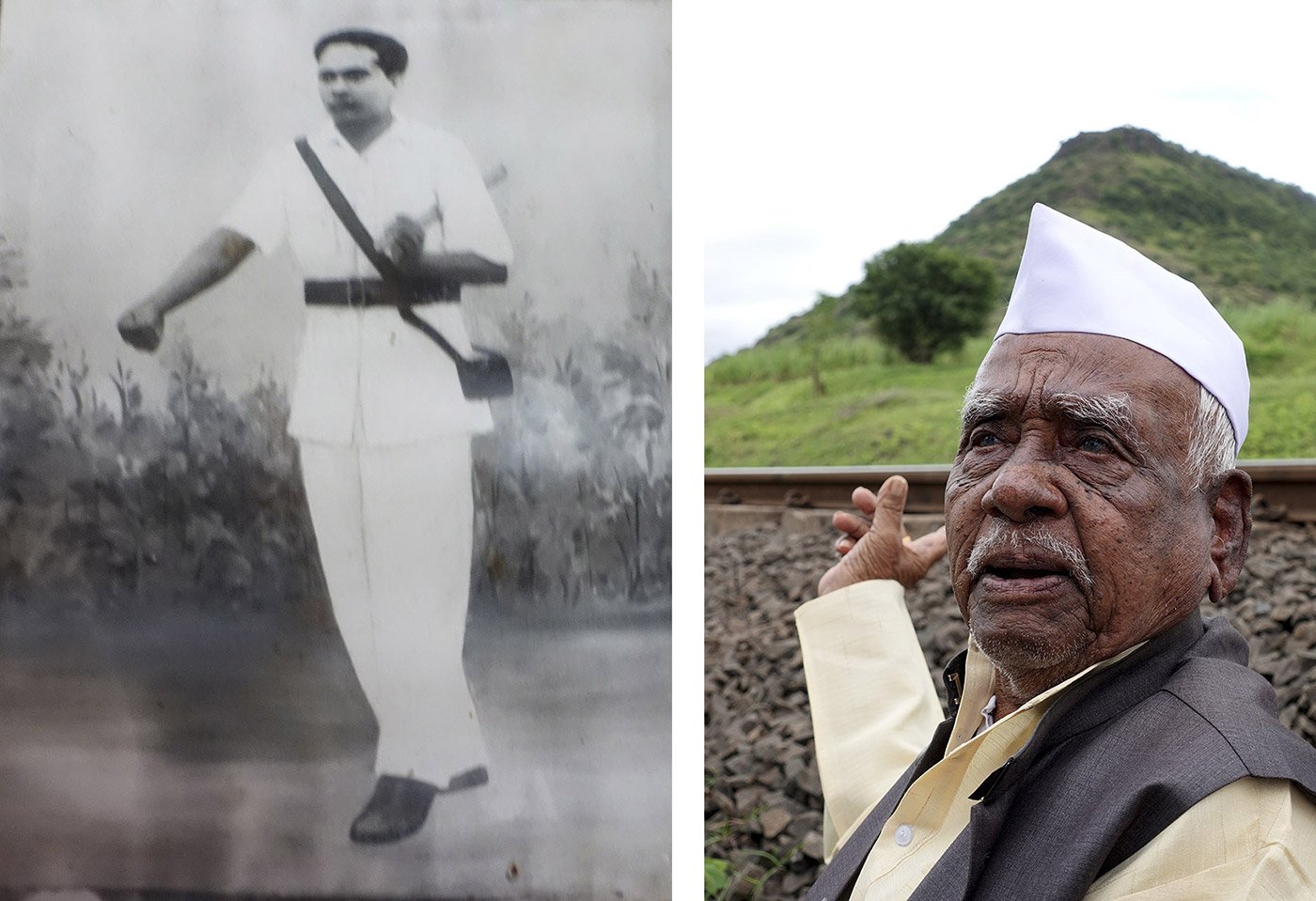 That is a valid claim. The prati sarkar , headed by the legendary Krantisinh Nana Patil,  functioned as a government in the villages it controlled. It organised supply and distribution of foodgrain, set up a coherent market structure and ran a judicial system. It also penalised moneylenders, pawnbrokers and landlord collaborators of the Raj. “Law and order was under our control,” says Captain Bhau. “The people were with us.”  The Toofan Sena  conducted daring strikes on imperial armouries, trains, treasuries and post offices. It distributed relief to peasants and labourers in great distress.

The Captain was jailed a few times. But his growing status saw even the jail guards treat him with respect. “The third time I went it was the jail in Aundh. It was like living in a palace as the king’s guest,” he boasts, laughing. Between 1943 and 1946, the prati sarkar and its whirlwind army held sway in Satara. As India’s Independence became a certainty,  the Sena dissolved.

And I've piqued him again. “What do you mean when did I join the Toofan Sena?” he grumbles. “I founded it.”  Nana Patil headed the government. G.D. Bapu Lad, his right hand man, was the ‘field marshal’ of the Sena. Captain Bhau was its operational head. Together with their followers, they dealt the colonial Raj a humiliating blow. That, at a time when similar uprisings in Bengal, Bihar, Uttar Pradesh and Odisha were proving hard for the British to handle. 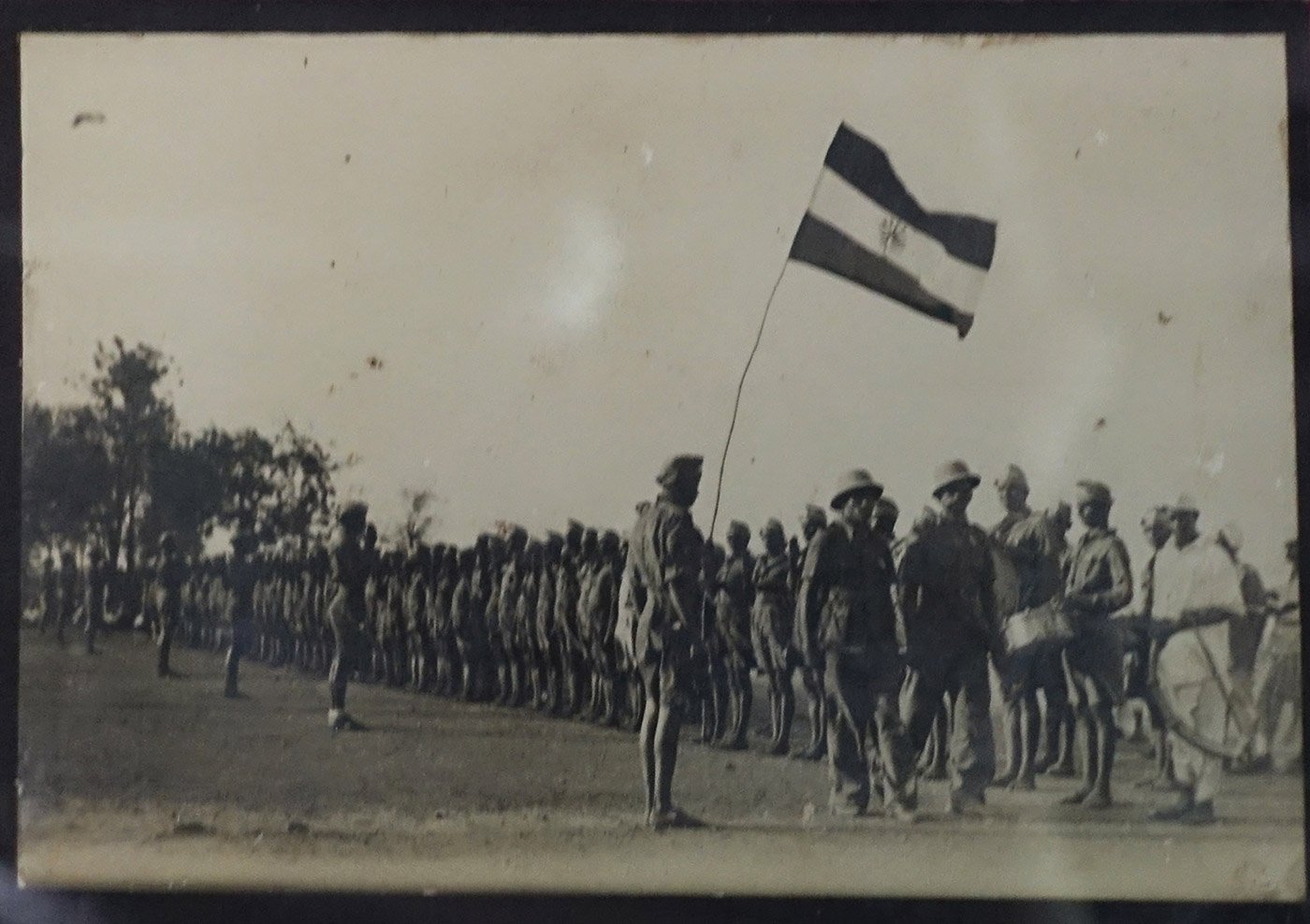 The captain’s drawing room at home is crowded with memories and mementos. His own room holds his modest belongings. His wife Kalpana, more than a decade younger than Captain Bhau, says bluntly of her legendary husband: “To this day the man doesn’t know where his family’s farm land is located. I, one lone woman, took care of the children, the household, the fields. I managed everything – with five children, 13 grandchildren and 11 great grandchildren to look after across all these years. He was in the jails of Tasgaon, Aundh and even Yerawada for a while. When free, he would vanish to the villages and return after months. I ran everything, I still do.” 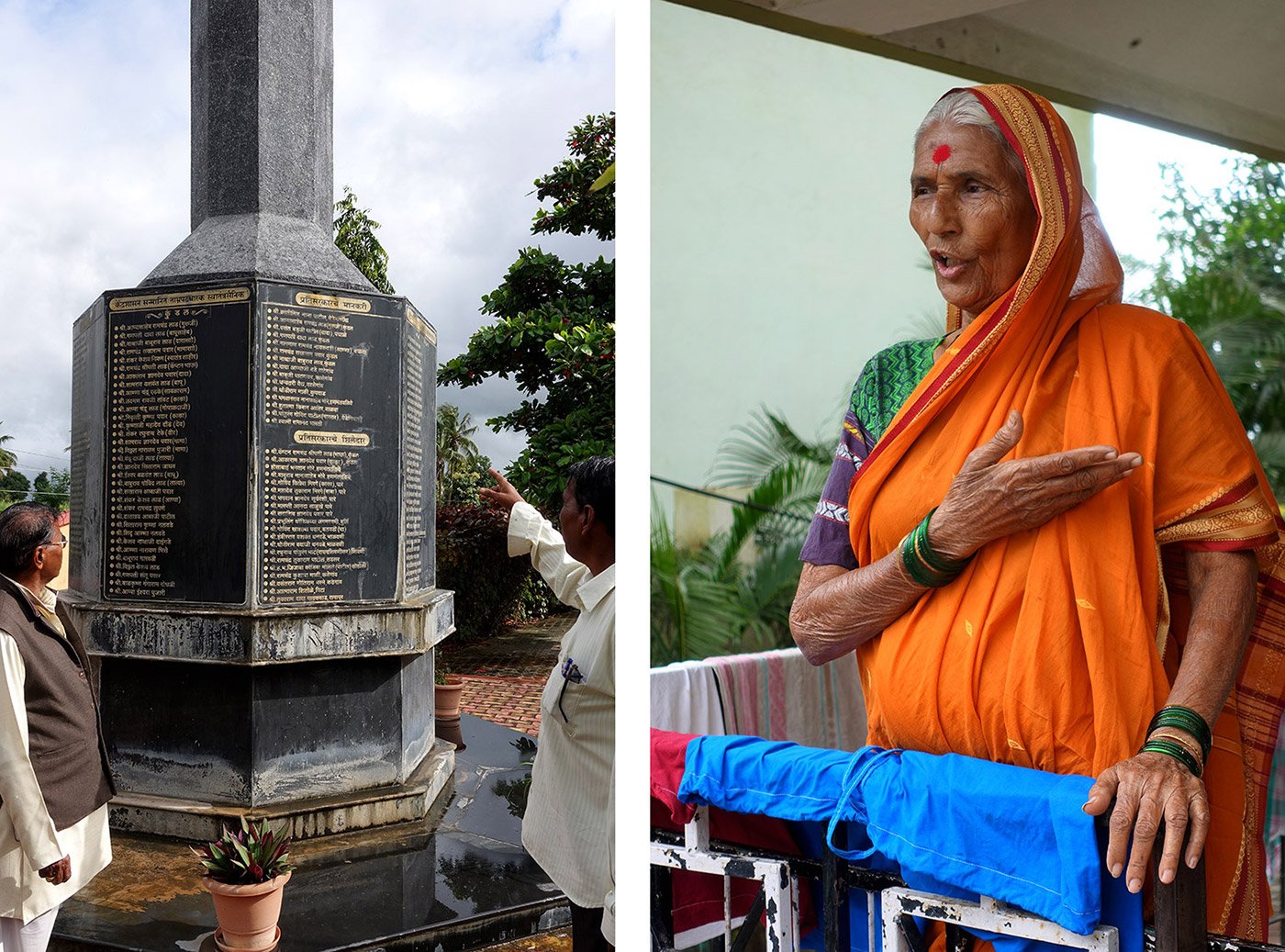 A pillar in Kundal lists the names of freedom fighters from different parts of Satara and Sangli. The Captain’s name appears sixth in the left row. Kalpana Lad, his wife at their home

The prati sarkar and Toofan Sena  threw up some of the most important leaders of India’s freedom struggle in Maharashtra. Nana Patil, Nagnath Naikwadi, G.D. Bapu Lad, Captain Bhau and many others. Most never got the importance they deserved after Independence. Different political forces operated within the sarkar and the Sena . Many were or became members of the Communist Party of India of the time. Amongst them, Nana Patil who went on to become president of the All India Kisan Sabha and was elected to parliament from Satara on a CPI ticket in 1957. Others, like Captain Bhau and Bapu Lad, went into the Peasants and Workers Party. Yet others like Madhavrao Mane were with the Congress. Almost all the living freedom fighters, irrespective of affiliation, mention the Soviet Union of the time and its resistance to Hitler as an inspiration for their uprising.

The 94-year-old is now tired but still reminiscing. “We dreamed of bringing freedom to the common man. It was a beautiful dream. We did achieve Independence.” And he is proud of that. “But I don’t think the dream was ever realised…today the man who has money rules. This is the state of our freedom.”

For Captain Elder Brother, in spirit at least, the whirlwind army still lives. “The Toofan Sena is still here for the people and will rise again when there is a need for it.” 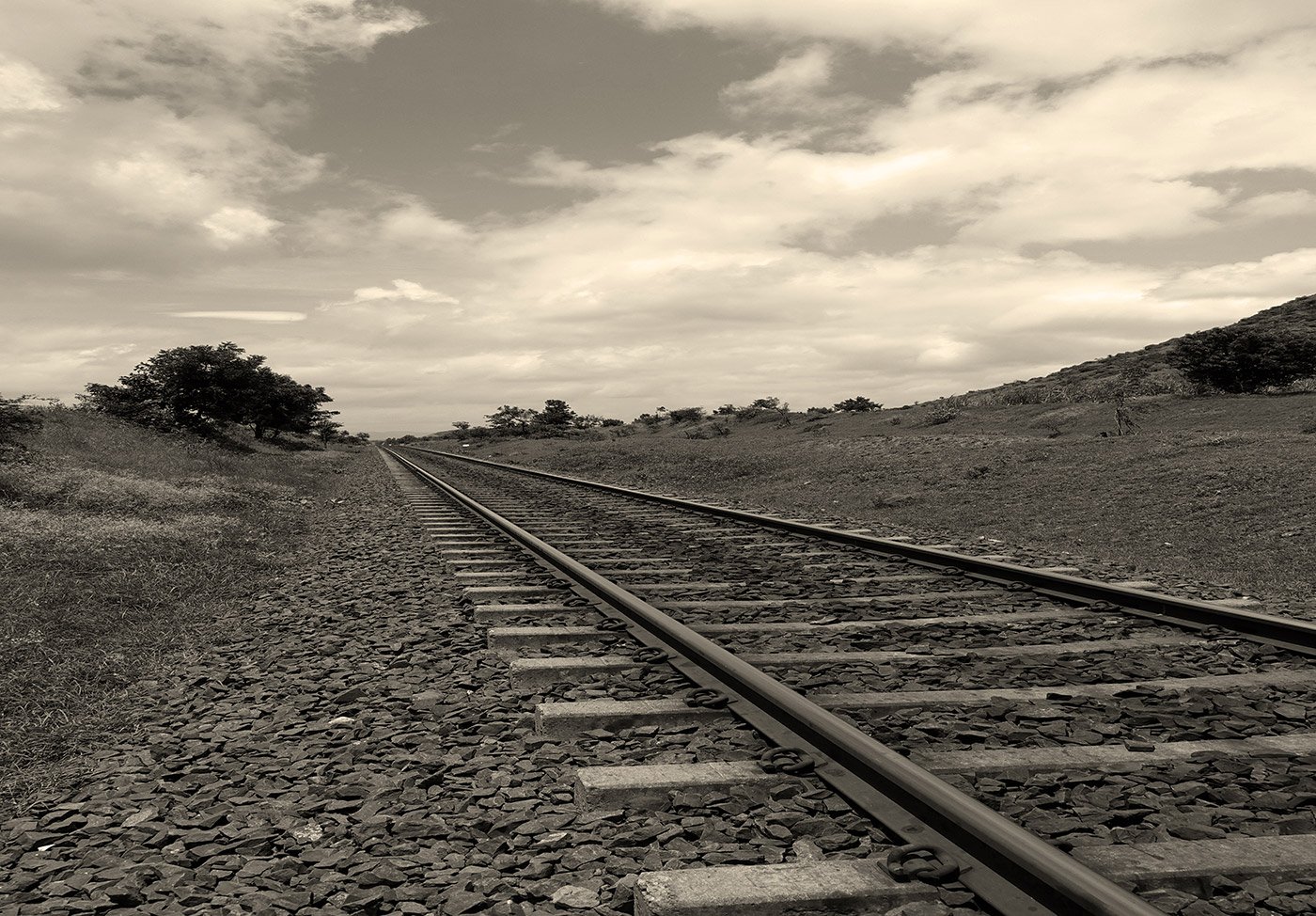