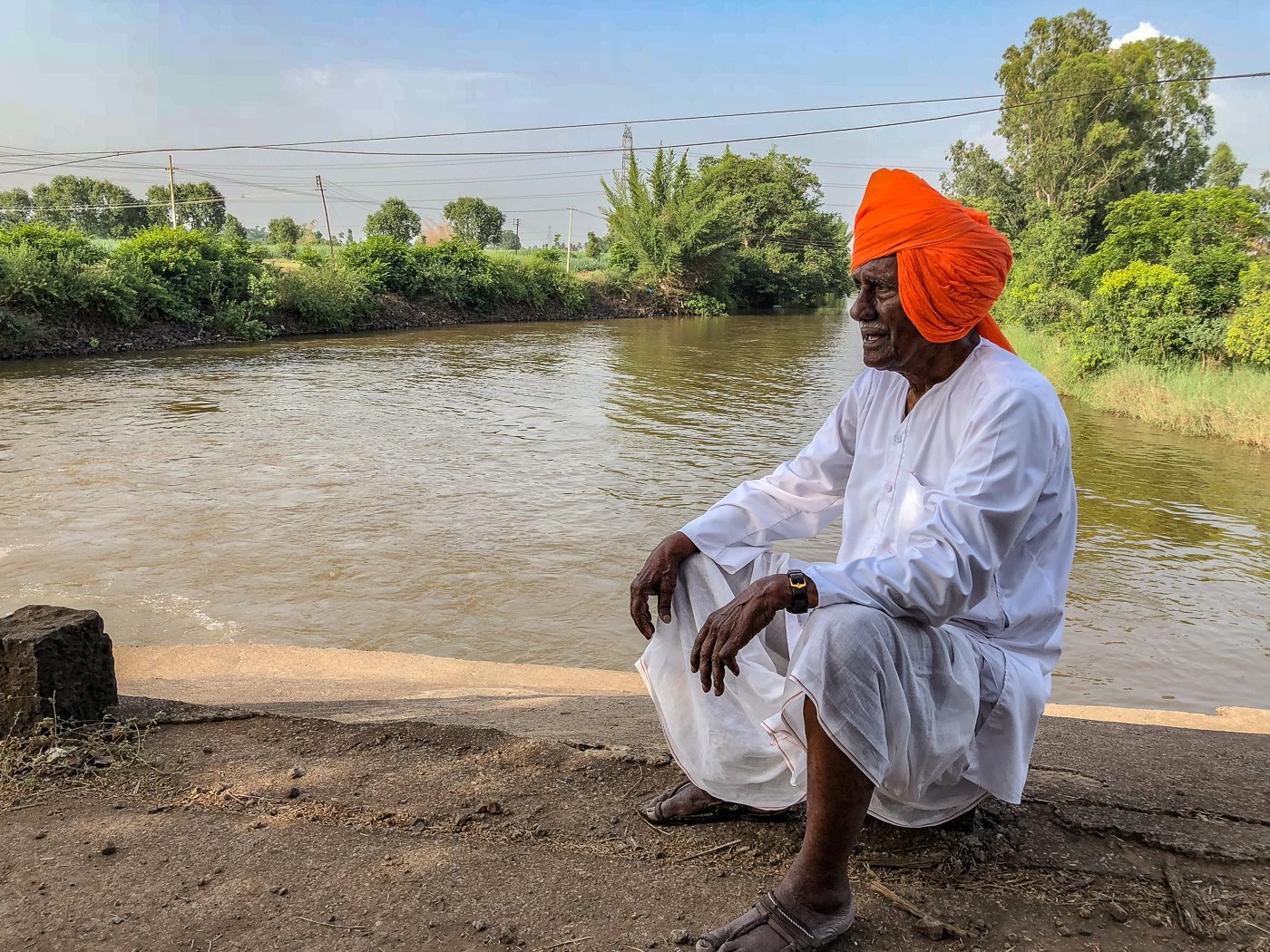 The courier and his anti-British barrage

Now 101 years old, Ganpati Patil recalls his quiet contribution to India’s freedom struggle and his more overt gift to the development of Maharashtra’s Kolhapur district after 1947

He sits calm and unruffled by the blazing heat on a small bridge atop this compact dam in Kolhapur that he brought into being over half a century ago. Patiently continuing to answer questions we had sprung on him earlier at lunch. He also walks, sprightly and energetic, all over the bridge with us – explaining how this barrage came to life in 1959.

Six decades later, Ganpati Ishwara Patil still has a grasp of irrigation, and understands farmers and farming. He knows the history of India’s struggle for Independence – and was part of it. He is 101 years old and among India’s last living freedom fighters.

“I was just a messenger,” he says, with striking modesty and humility about his life from the 19300s onwards. “A courier for the underground anti-British movements.” That included the banned networks of the communist revolutionary groups, of the socialists – and that of the Congress Party (around the time of the Quit India movement in 1942). He must have been good it – because he never got caught. “I did not go to prison,” he says, almost apologetically. It’s left to others to tell us that he also did not accept the tamra patra (inscribed citation) or even the pension given to freedom fighters after 1972. 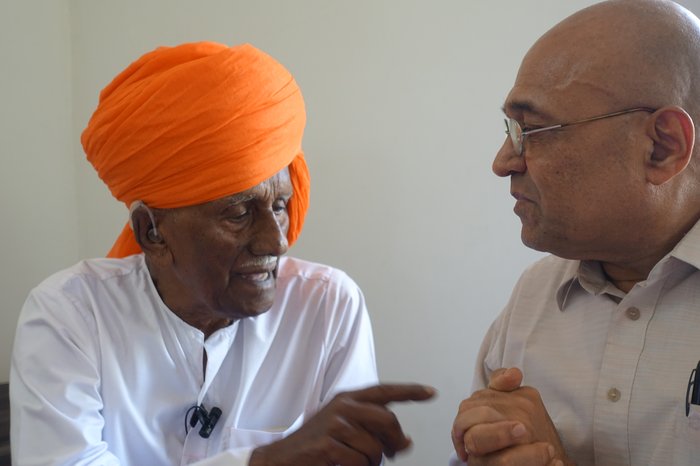 Ganpati Patil with Ajit Patil, the son of his old colleague, the late Santram Patil (a co-founder of the Lal Nishan Party)

'I did not go to prison', Ganpati Patil says, almost apologetically. It’s left to others to tell us that he also did not accept the tamra patra (inscribed citation) or even the pension given to freedom fighters after 1972

“How could I do that?” he says when we ask him about it at his son’s home in Siddhanerli village of Kolhapur district’s Kagal taluka . “Why ask for anything when we already had land to feed us?” He owned 18 acres at the time. “So, I did not ask, I did not apply.” He echoes what many other freedom fighters on the Left say: “We fought for this country’s freedom, not to get ourselves pensions.” And he keeps stressing his was a small role – though the courier’s task in the radical underground was dangerous, especially in war-time when the colonial power resorted to hangings of activists even more swiftly than usual.

Perhaps because those risks were not clear to her, his mother accepted his work as a courier – so long as he was not spotted in more publicly visible roles.  Except for his mother, his entire family was wiped out in a plague epidemic soon after they moved to his paternal home in Siddhanerli village in Kagal. At that time, Ganpati, born on May 27, 1918, at his maternal grandparents’ place in Karnoor village in the same taluka , was just “four and a half months old,” he says.

He became the sole heir to the family’s land and – his mother thought – should not be allowed to risk his life for any cause. “Only when I publicly participated in, or even organised marches [towards 1945], did people come to know of my political involvement.” And he used the farm in Siddhanerli to quietly hold meetings of activists in the late 1930s and early 1940s. “My mother and I were the only ones in the house – everyone else had died – and people had a soft corner for us and looked out for me.” 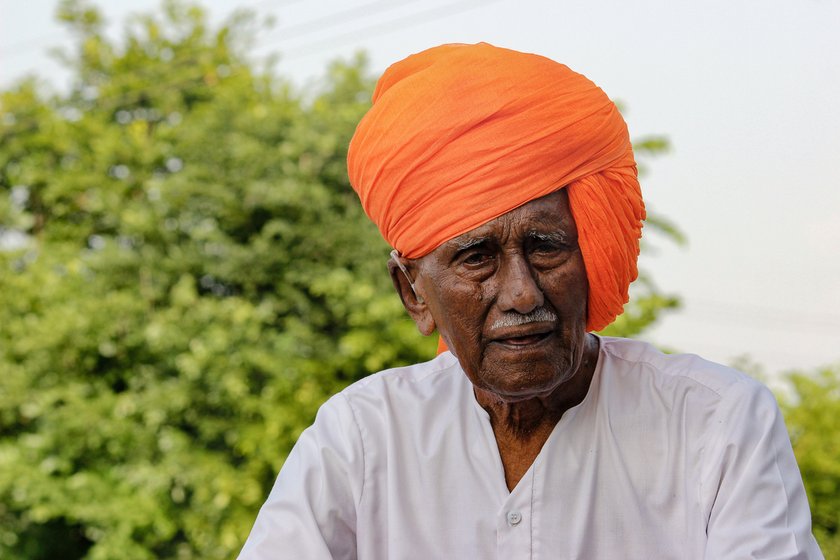 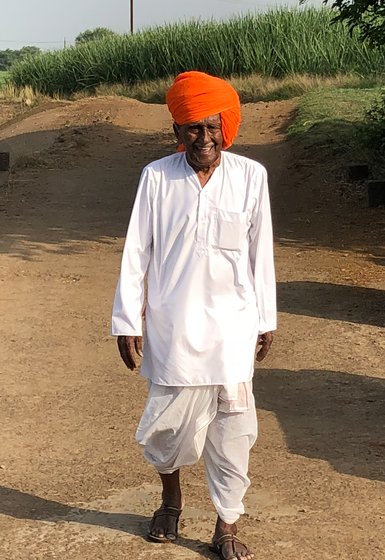 It all started when, at the age of 12, Ganpati Patil walked 28 kilometres from Siddhanerli to Nipani to listen to Mohandas Karamchand Gandhi speak

Like millions of others in his time, it all started when, at the age of 12, Ganpati Patil ran into a man already five times his age. Patil walked 28 kilometres from Siddhanerli to Nipani in present-day Karnataka – to listen to Mohandas Karamchand Gandhi speak. It changed his life. The young Ganpati even wriggled his way onto the stage at the end of the event and “felt happy just to have touched the Mahatma’s body.”

It was only in 1941, though, that he became a member of the Congress party, on the eve of the Quit India stir. At the same time, his engagement with other political forces continued. From 1930, when he went to Nipani, till he joined the Congress, his main links were to the socialist faction of that party.  In 1937 he attended a training camp in Appachiwadi in Belgaum held by socialist leaders S.M. Joshi and N.G. Goray. Nagnath Naikwadi of the future Satara prati sarkar also addressed the participants. And all of them,  including Ganpati, received some arms training too. (See ' Captain Elder Brother' and the whirlwind army and The last hurrah of the prati sarkar )

In 1942, he says: “Expelled leaders of the Communist Part of India like Santram Patil, Yashwant Chavan [not to be confused with Congress leader Y.B. Chavan], S. K. Limaye, D.S. Kulkarni and other activists formed the Navjeevan Sanghatan [New Life Union].” Ganpati Patil joined them.

At that point, these leaders did not form a separate party, but the group they created came to be known as the Lal Nishan (Red Flag). (It emerged as a political party in 1965. Only to split again in the 1990s).

Through all the pre-Independence turmoil, Ganpati Patil says he “carried messages, documents and information to our different groups and comrades.” He modestly waves away the specifics of those assignments, insisting his was not a central role. Yet, the old gentleman laughs (but is pleased) when someone at the lunch meeting in his son’s house suggests that his potential as a messenger and courier was discovered at age 12, when he quietly made that 56-kilometre walk to Nipani and back.

“After Independence,” Ganpati says, “the Lal Nishan joined with the Peasants and Workers Party [PWP] to form the Kamgar Kisan Party [Workers and Farmers Party].” This party split, with the legendary Nana Patil and his close colleagues joining the Communist Party of India (CPI). The PWP was reconstituted and the Lal Nishan regrouped once again. In 2018, the LNP faction Ganpati identified with merged with the CPI.

After Independence in 1947, Patil’s role in some movements – such as struggles for land reform in Kolhapur – was more central. Though a landowner himself, he fought for a fair deal for agricultural labourers and prevailed on other farmers to accept a decent minimum wage for them. He pushed to develop the ‘Kolhapur-type barrage’ for irrigation – its first dam (we’re sitting atop it) still serves around a dozen villages, while remaining within the control of local farmers.

“We funded and constructed this on a cooperative basis, mobilising farmers in nearly 20 villages,” says Ganpati. The stone masonry dam on the Dudhganga river irrigates a little over 4,000 acres. But, he says with pride, it was done without any displacement. Today, it would be classified as a state-level medium-irrigation scheme. 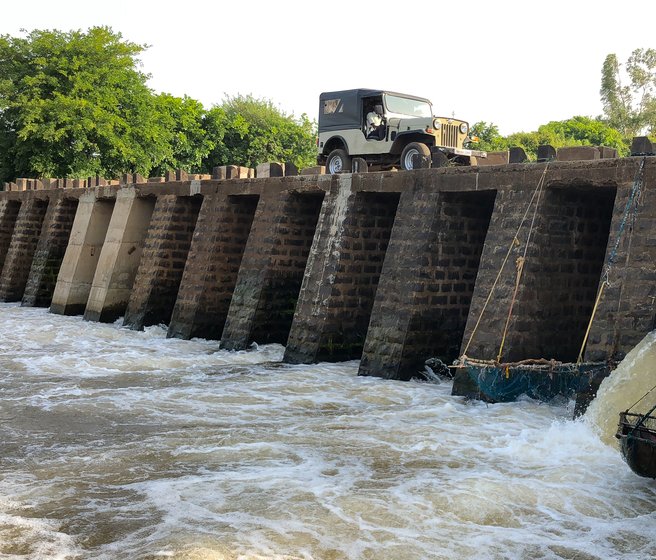 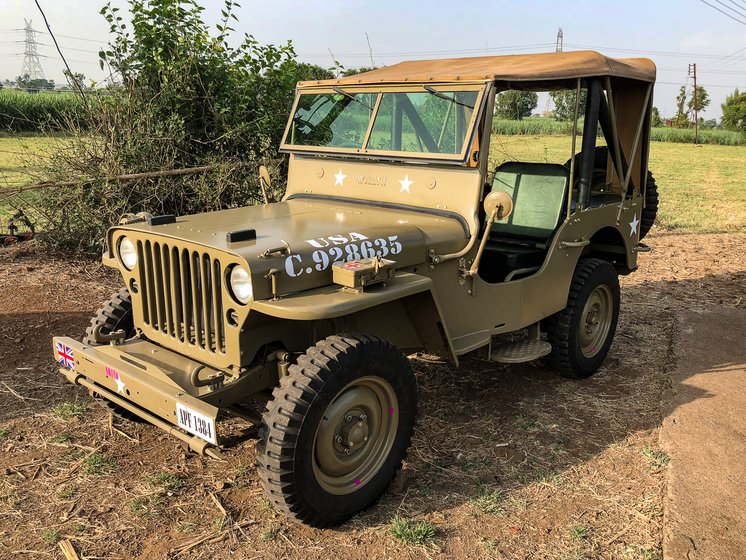 Left: 'A barrage of this type', Ajit Patil says, 'is low-cost, locally maintained, and does little harm to ecology and environment'. Right: Ganpati Patil's vehicle is an army surplus jeep gifted by a grandson or grandnephew. It has, ironically, a British flag painted on the front bumper

“A barrage of this type is constructed along the flow of the river,” says Ajit Patil, an engineer from Kolhapur and the son of Ganpati’s old colleague, the late Santram Patil (a co-founder of the Lal Nishan Party). “There was and is no submergence of land, and the flow of the river is not unduly restricted. The storage of water all around the year helps recharge the groundwater on both sides and augments the irrigation potential even from wells which are outside the zone of direct irrigation. It is low-cost, locally maintained, and does little harm to ecology and environment.”

And we do see, at the height of summer in May, a dam with appreciable levels of water, and the ‘doors’ of the barrage open for regulating the flow. There is also quite a bit of fish cultivation in the backwaters of the dam.

“We got this going in 1959,” says Ganpati Patil, with quiet pride. He does not mention – until we ask him – that he was cultivating on lease, several acres of farmland that directly benefitted from the dam. He simply cancelled his lease and returned the land to its absentee owner. It was important to him that “I should not be seen as doing this for my personal benefit.” That transparency and removal of any conflict of interest helped him persuade even more farmers to join in the cooperative effort. They built the dam taking a bank loan of Rs. 1 lakh, completed it within Rs. 75,000 – and returned the remaining Rs. 25,000 immediately. The bank loan they repaid fully within the stipulated three years.  (Today, a project the same size would need Rs. 3-4 crores, would suffer further from inflated cost overruns – and end up with unrepaid loans).

We’ve kept the old freedom fighter up and active the whole day, much of it in the mid-day heat of May, but he doesn’t seem tired. He’s happy to walk us around, address our curiosity. Finally, we step away from the bridge towards our vehicles. His is an army surplus jeep – gifted by a grandson or grandnephew. It has, ironically, a British flag painted on the front bumper and ‘USA  C 928635’ printed on the sides of the bonnet. Talk of generations apart.

This jeep’s main occupant though followed a different flag all his life. And still does. 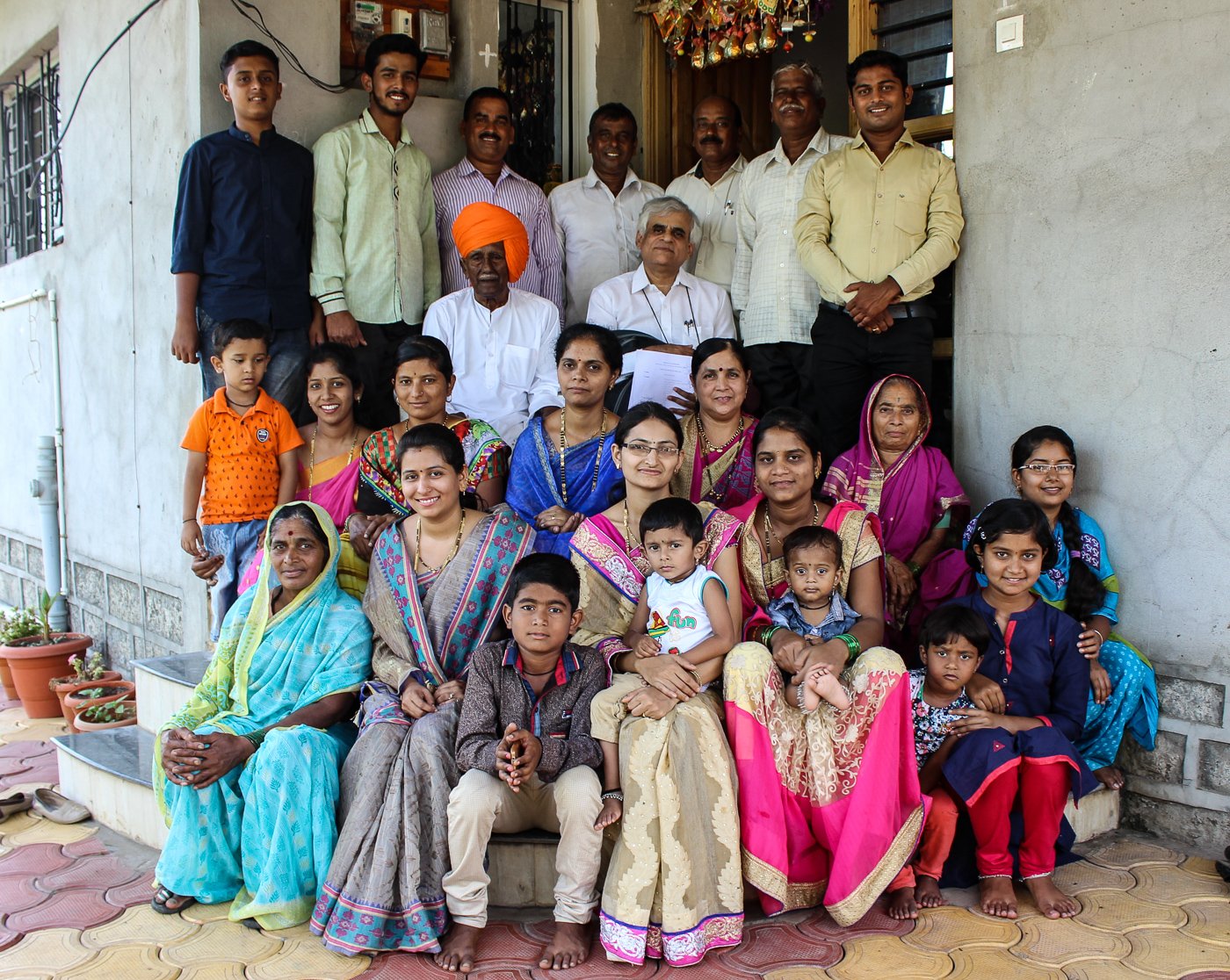 With Ganpati Patil's family, at his son’s home in Siddhanerli village of Kolhapur district’s Kagal taluka