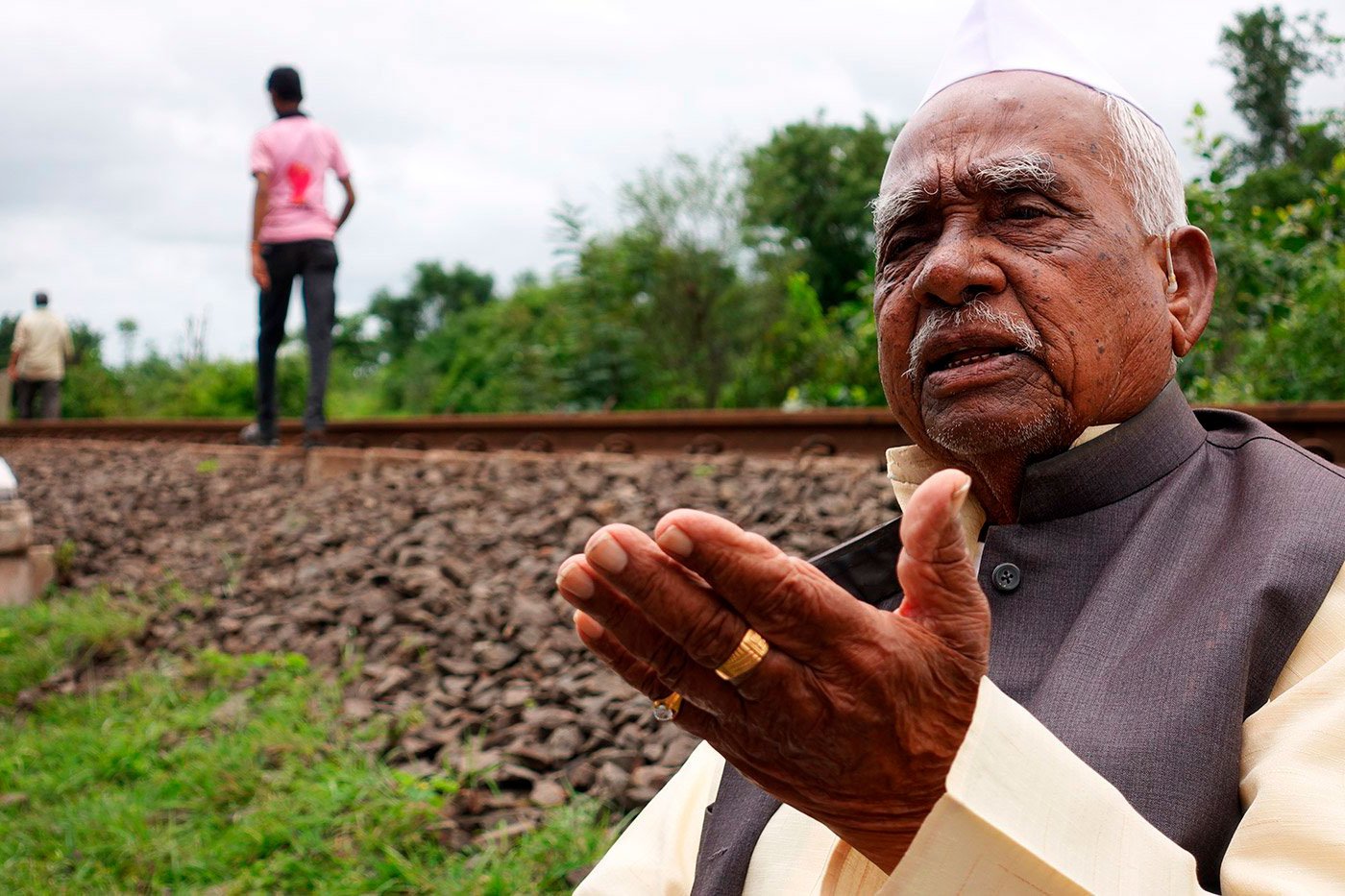 A moment in history dies with Captain Bhau

In the end, he went unhonoured and unsung by the nation he fought for, but venerated by the thousands who knew of this remarkable human being who with his comrades in the 1940s stood up to the mightiest empire in the world. Ramchandra Sripati Lad was an important part of the ‘ prati sarkar ’, the underground provisional government led by the legendary Nana Patil, which had declared Satara’s secession from the British Empire in 1943.

But Captain Bhau (his underground nom de guerre ) and his warriors didn’t stop at that. For three years, till 1946, they held off the British, and it was the prati sarkar that held sway in some 600 villages from where they ran their parallel government. In a sense, his death on February 5 marks the end of a sarkar that took on the Raj. 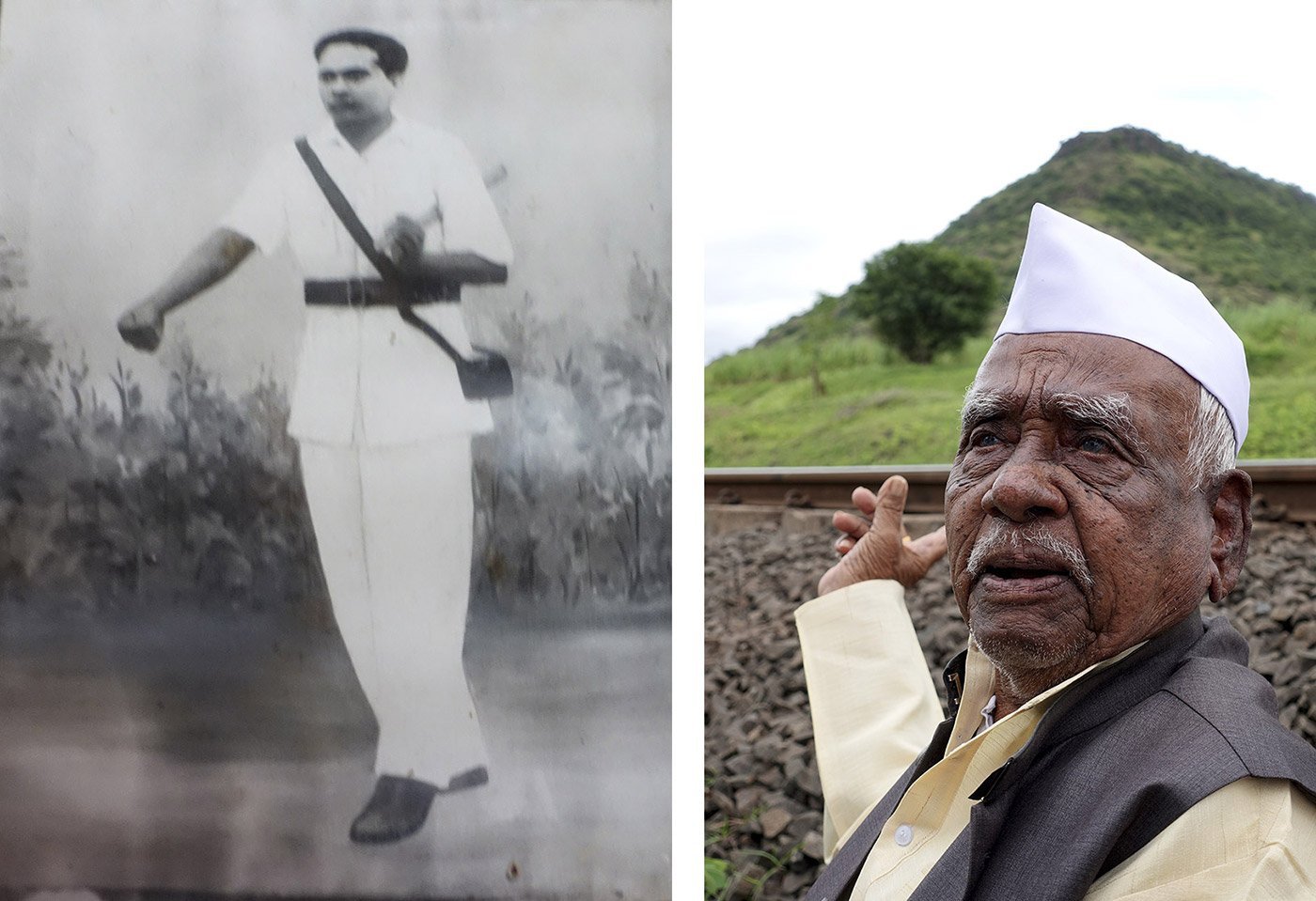 Ramchandra Sripati Lad, or 'Captain Bhau,' as he appeared in a 1942 photograph and (right) 74 years later

Captain ‘Bhau’ (‘elder brother’) headed the striking wing of the prati sarkar ’s underground armed force – the ‘Toofan Sena’ or whirlwind army. Together with his personal hero G.D. Bapu Lad, he led the attack of June 7, 1943, in Shenoli, Maharashtra, on the Pune-Miraj special goods train carrying the salaries of officials of the British Raj. The money they looted from it was mainly spent on helping hungry farmers and labourers in a year of scarcity and famine.

Decades later, when he and the prati sarkar had sunk into obscurity, PARI rediscovered Captain Elder Brother and had him tell us his story. That’s when he made the distinction between Independence and Freedom. India is independent. But freedom, he said, is still the monopoly of the few. And: “Today, the man who has money rules…he who holds the hare is the hunter – this is the state of our freedom.”

We also made a short film on him, primarily the effort of PARI’s Sinchita Maji, Samyukta Shastri and Shreya Katyayini (put together elegantly by Archana Phadke) that continues to mesmerise young audiences who have never seen, spoken with, or listened to a bona fide freedom fighter. In some colleges, the youngsters are in tears when they see this beautiful film, unable to believe that such selfless human beings still existed, that such role models had never once been held before their eyes.

In July 2017, at a meeting held to felicitate the last living freedom fighters of Satara and Sangli, Captain Bhau was to meet Gopalkrishna Gandhi, former Governor of West Bengal and grandson of Mahatma Gandhi. The warrior and one-time armed revolutionary was in tears as he gave the grandson of the Mahatma a warm hug. It was, he told me later, one of the most emotional moments of his life.

In November 2018, as over 100,000 farmers marched on Parliament, he sent them a video message through PARI’s Bharat Patil. “If I were in better health,” the old warrior thundered, at age 96, to the farmers, “I would be there marching with you.”

In June 2021, I decided I had better see him once more and reassure myself that he was surviving the pandemic. Together with my colleague Medha Kale, I went to greet him on his birthday. On behalf of PARI, we took him birthday gifts: a lovely Nehru jacket (he was always fond of them), a hand-carved hand stick, and an album of photos we’d taken of him. I was shocked to see how he’d shrunk since I’d last met him in 2018. The old warrior was weak, listless, could hardly speak a word – but he loved the gifts. He wore the jacket immediately – though it was blazing hot in the Sangli sun. And placing the handstick across his knees, absorbed himself in the photo album.

It was only then that we realised he had lost his partner of over seven decades, the redoubtable Kalpana Lad, more than a year earlier. And that had devastated the old gentleman for whom the loss was unbearable. I had the sense as we left that his own end could not be too far off. 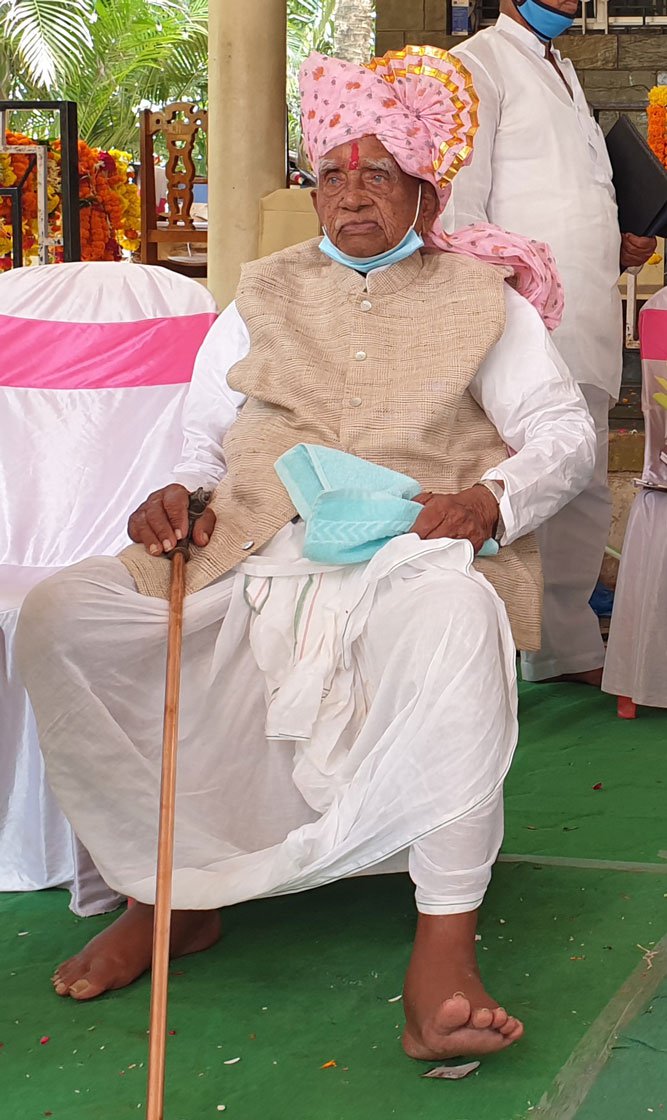 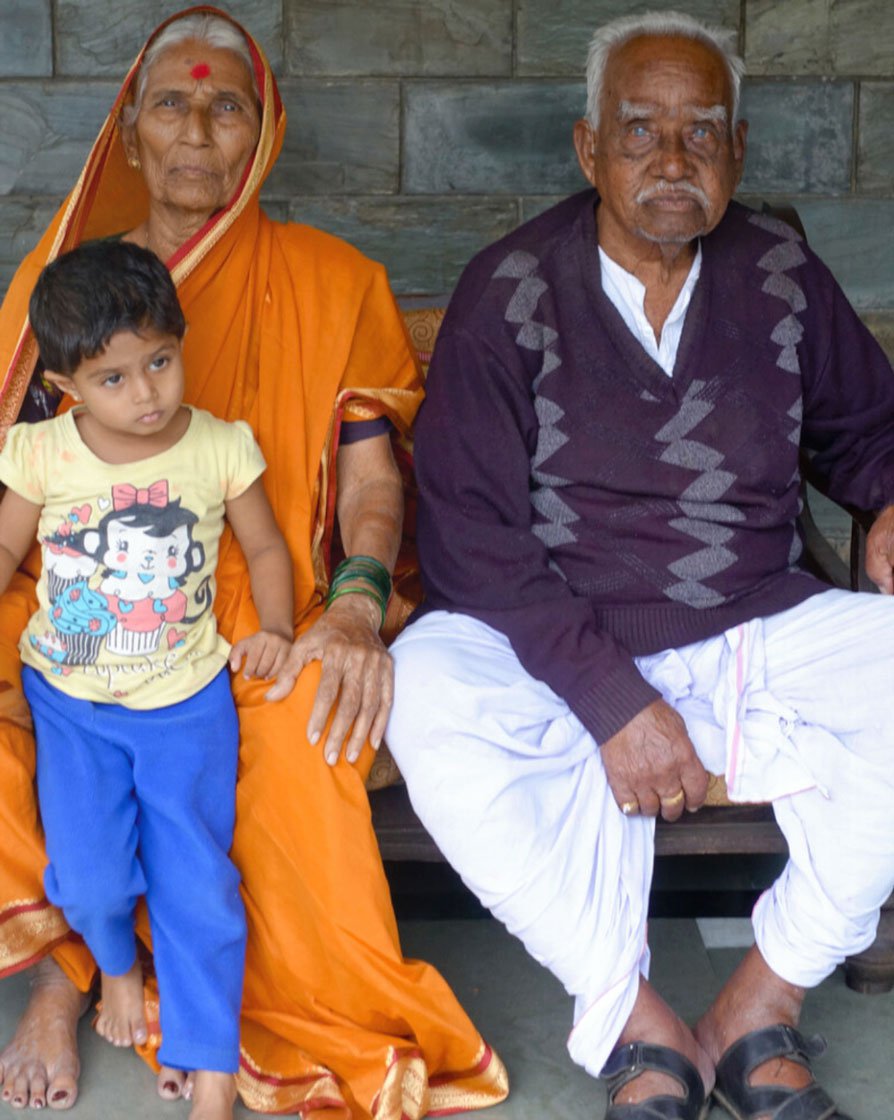 Left: Captain Bhau wearing the Nehru jacket and holding the hand stick gifted by PARI on his birthday in 2021. Right: Partners of over 70 years, Kalpana Lad and Captain Bhau seen here with a young relative. Kalpanatai passed away a couple of years ago

Deepak Lad phoned me to say: “He was wearing that very Nehru jacket when he passed.” The carved handstick too, was beside him. Deepak says officials had promised a funeral with state honours for Bhau, but it never materialised. Very large numbers of people, though, gathered for their Captain’s last journey.

PARI has won 44 national and global awards in our 85 months of existence. But I believe none has meant more to us than this single accolade from Captain Elder Brother after the film on him was shown in his hometown of Kundal. This is the message he sent us through Deepak Lad in 2017:

"The whole history of the prati sarkar was dead until P. Sainath and PARI revived it. That great chapter in our history was erased. We had fought for Independence and Freedom, then the years passed by, and our contribution was forgotten. We were abandoned. Sainath came to our home last year for my story. He went with me to the site in Shenoli of our great attack on the British train, to the very point on the tracks where we fought.

“With this film and article about me and my fellow fighters, Sainath and PARI have revived the memory of the prati sarkar and how it fought for the people, they have revived our pride and honour. They have restored us to the consciousness of our society. This was our true story. 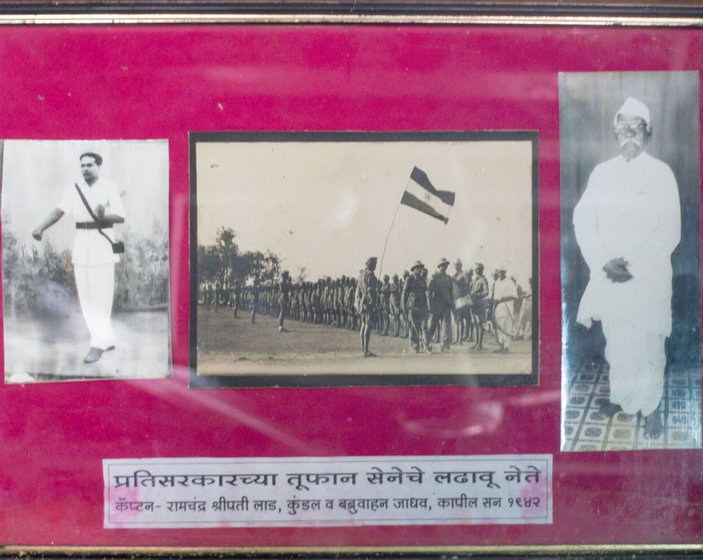 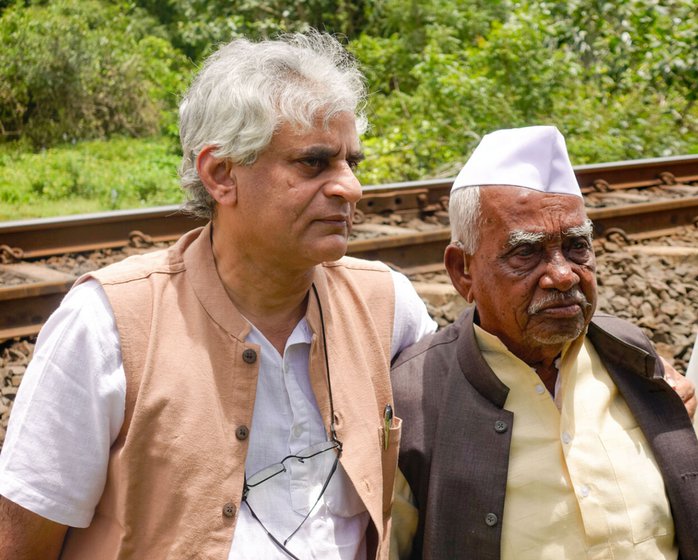 Left: Old photos of Toofan Sena and its leaders, Captain Bhau and Babruvahan Jadhav. Right: Captain Bhau with P. Sainath in Shenoli in 2016

“I felt very emotional watching that film. Earlier, most young people in my own village knew nothing, had no idea who I was or what my role was. But today, after this film and article came on PARI, even the younger generation look at me with a new respect and know now that my comrades and I played a role in making India a free nation. This, in my last and final years, has restored our respect."

With his passing, India has lost one of her greatest ever foot-soldiers of freedom – those who fought for this country’s liberation with no thought of personal gain, and fully conscious of the risks they were taking.

In 2017, more than a year after that first interview, Bharat Patil sent me a photograph of the old man marching at a farmer’s strike in Kundal. I asked Captain Bhau when I next saw him, what was he doing out there in the sun? What was he fighting for now? Invoking memories of the freedom struggle, he said:

Read also: ‘Captain Elder Brother’ and the whirlwind army and The last hurrah of the prati sarkar