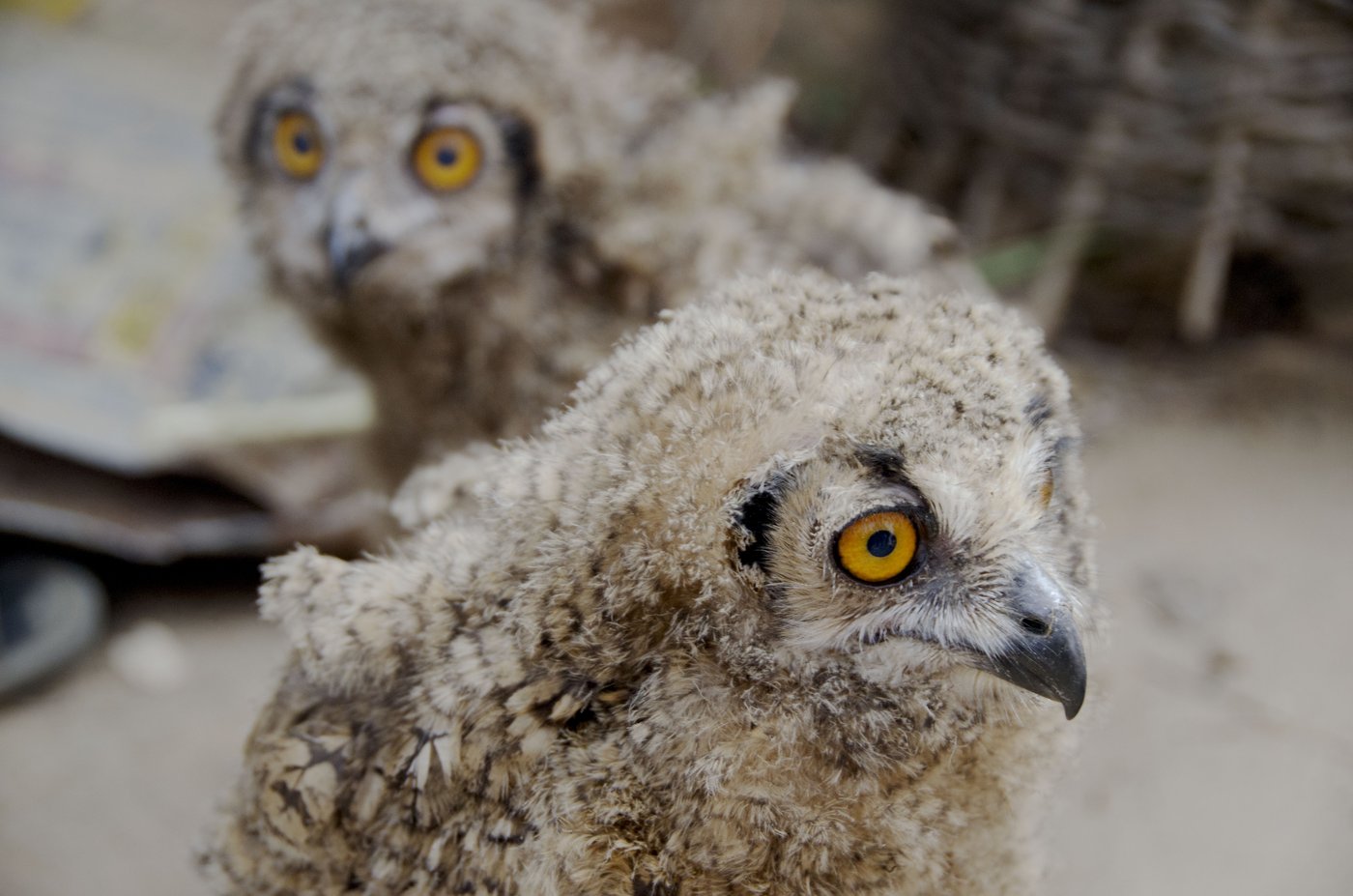 The Murmus do give two hoots

Madanlal Murmu, who lives in a hamlet near Chihutia village in Bihar, has two unusual ‘family’ members

"He is blind, yet he is looking at you,” says Madanlal Murmu, as a pair of round eyes, amber and aglow, captivate me – the only spot of intense colour in the otherwise dusty and mud-covered surroundings. I try to move closer to quickly get a photograph, but it turns away. I move around again and manage to click.

Madanlal makes a sound signalling something to them, and they seem to respond. He introduces me to his two pet owls,  Sidhu Murmu and Kanhu Murmu, with a smile. ‘They are a part of the family,” he says. 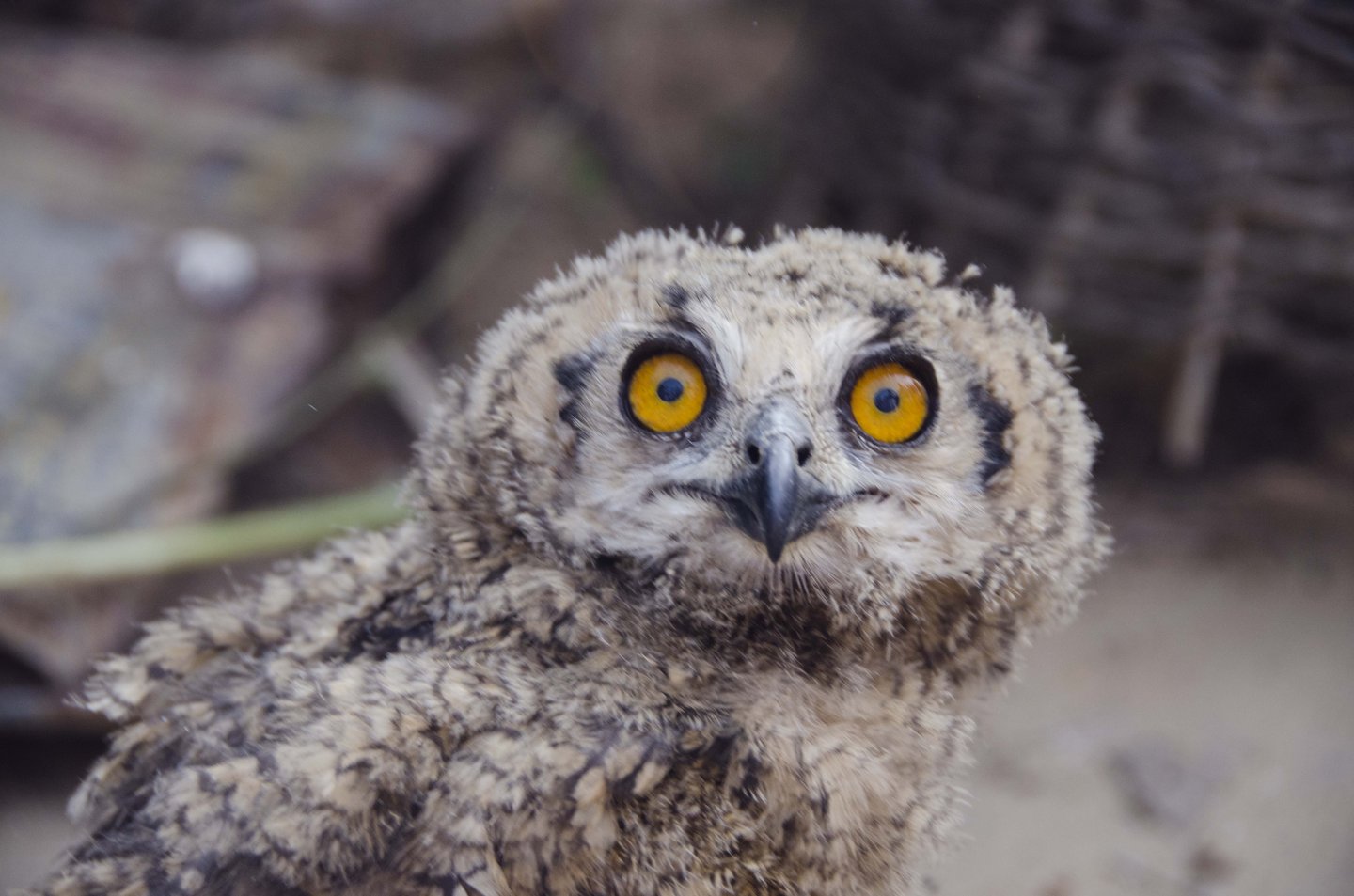 I  was in Banka district of Bihar, en route to Chihutia village looking for stories, when I came across Madanlal sitting on the ground busy making brooms. We talked for a while, then he walked with me to the edge of his hamlet, where I saw the two baby owls outside his house 'looking' back at me. (Owls are not sightless during the daytime, they just have better night vision). 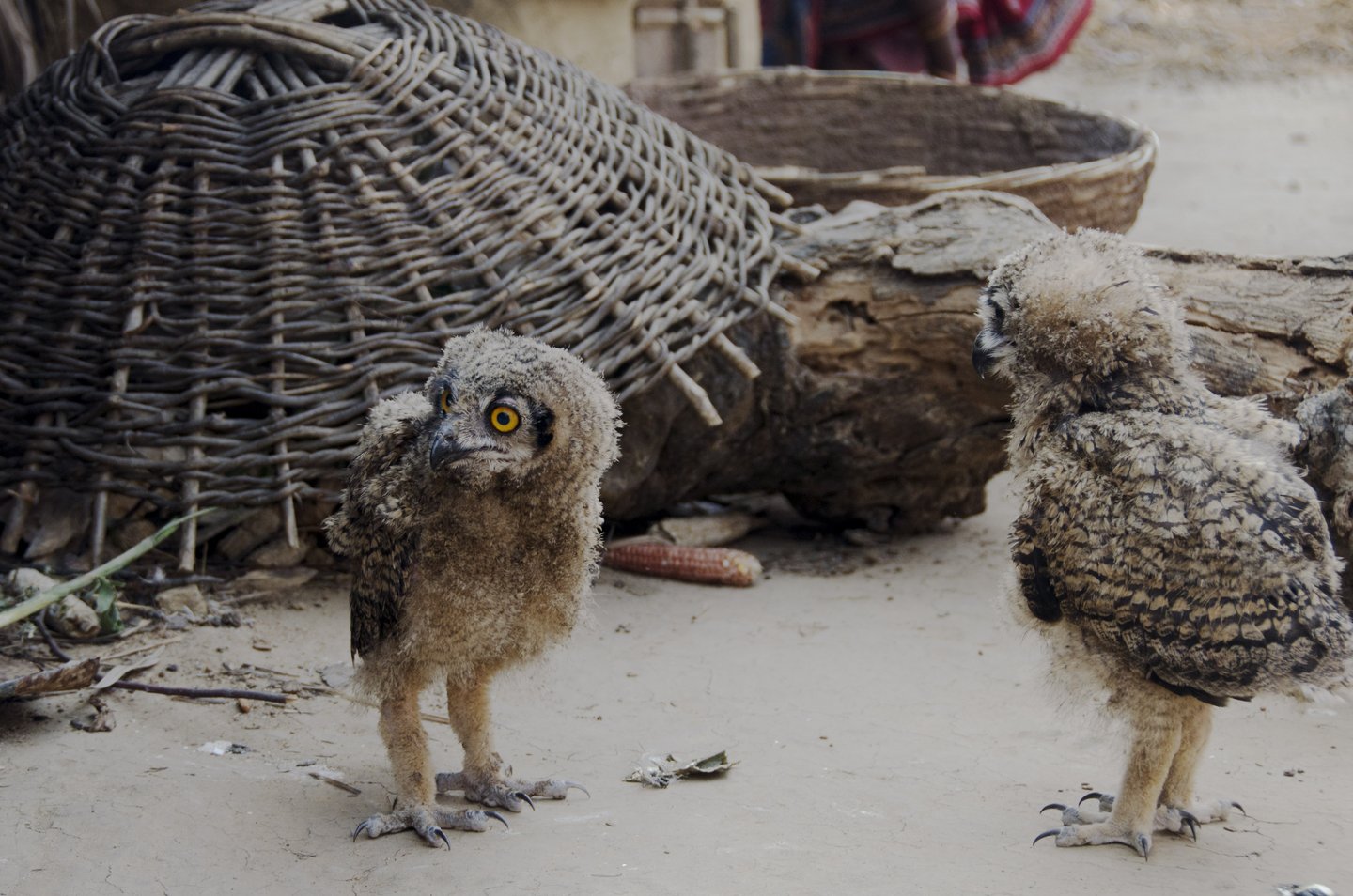 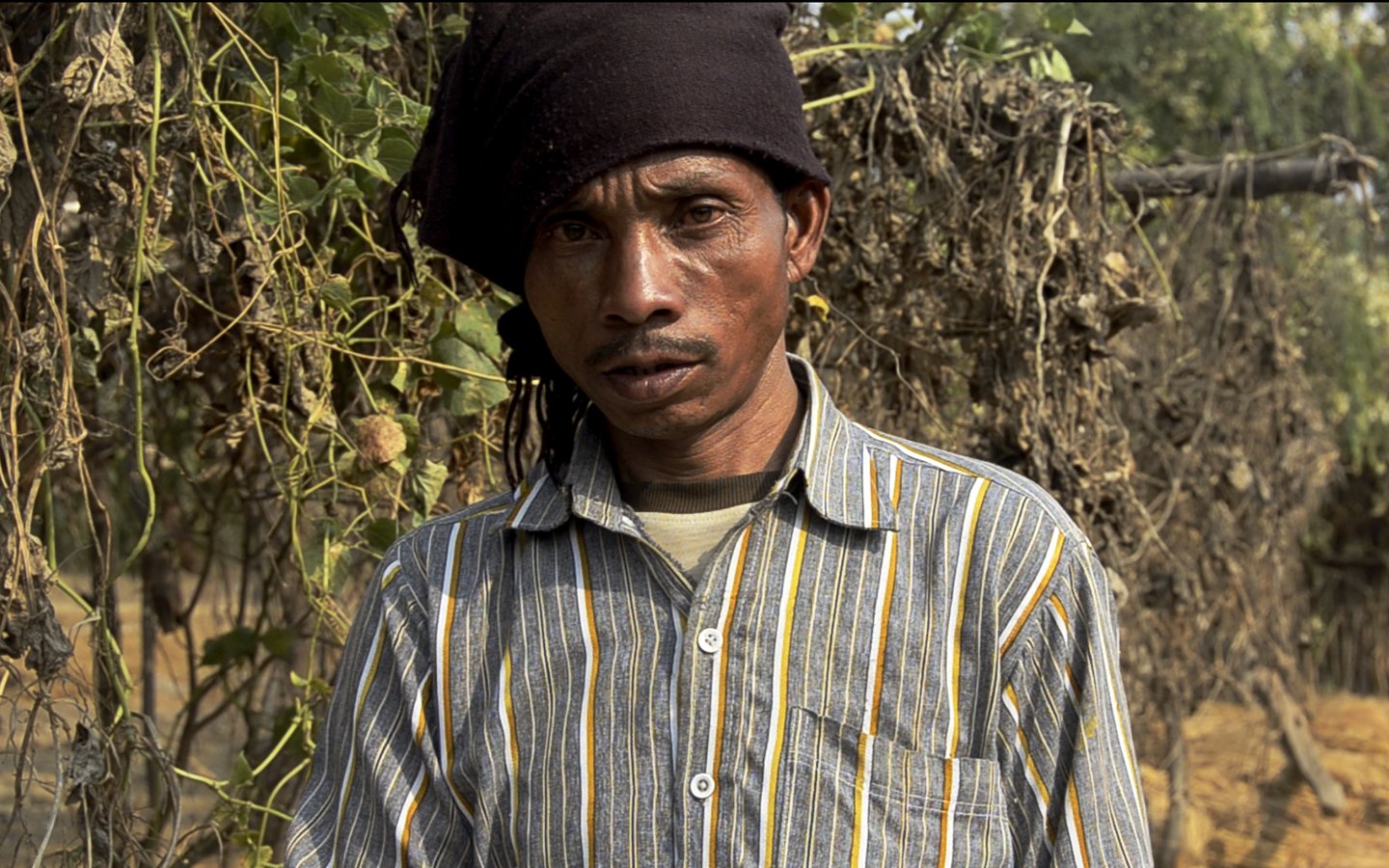 Madanlal, in his 40s, belongs to the Santal tribe. He does not own any land and lives with his wife in a sparse one-room mud-and-hay hut, on land that belongs to the forest department near Chihutia village of Kakwara tola in Bihar’s Banka district.

He makes brooms from the local kusha grass and sells them in nearby villages for Rs. 40 each; he also works on the farms in these villages during the sowing and harvesting seasons.

How did he find such unusual pets, I ask. “One day, I was in the forest collecting firewood,” Madanlal replies. “I found them there and brought them back with me.”

“We take special care of the pair. They are auspicious because they are Goddess Lakshmi’s vehicle,” says Murmu’s neighbor, sitting outside the adjacent hut. Murmu murmurs in agreement.  Besides, the birds can fetch a hefty price when they are older.

Kanhu and Sidhu are just over a month old now, and they weigh around one kilo each, Madanlal says. “They are going to grow bigger, more beautiful and heavier,” he adds, looking at them adoringly. The birds, although babies, have a large wingspan. They are too young to be able to fly much right now, and are not kept in cages. Their legs though look extremely strong.

Madanlal says he expects them to weigh between 6-7 kilos each when fully grown. If that is so, Sidhu and Kanhu will be huge creatures, far heavier than most owls that clock in at around three kilos or thereabouts.

Kanhu and Sidhu’s diet is carnivorous. “I give them a little rice, but they like insects,” Madanlal says; he expects that in around a month they will able to catch bigger prey like mice. 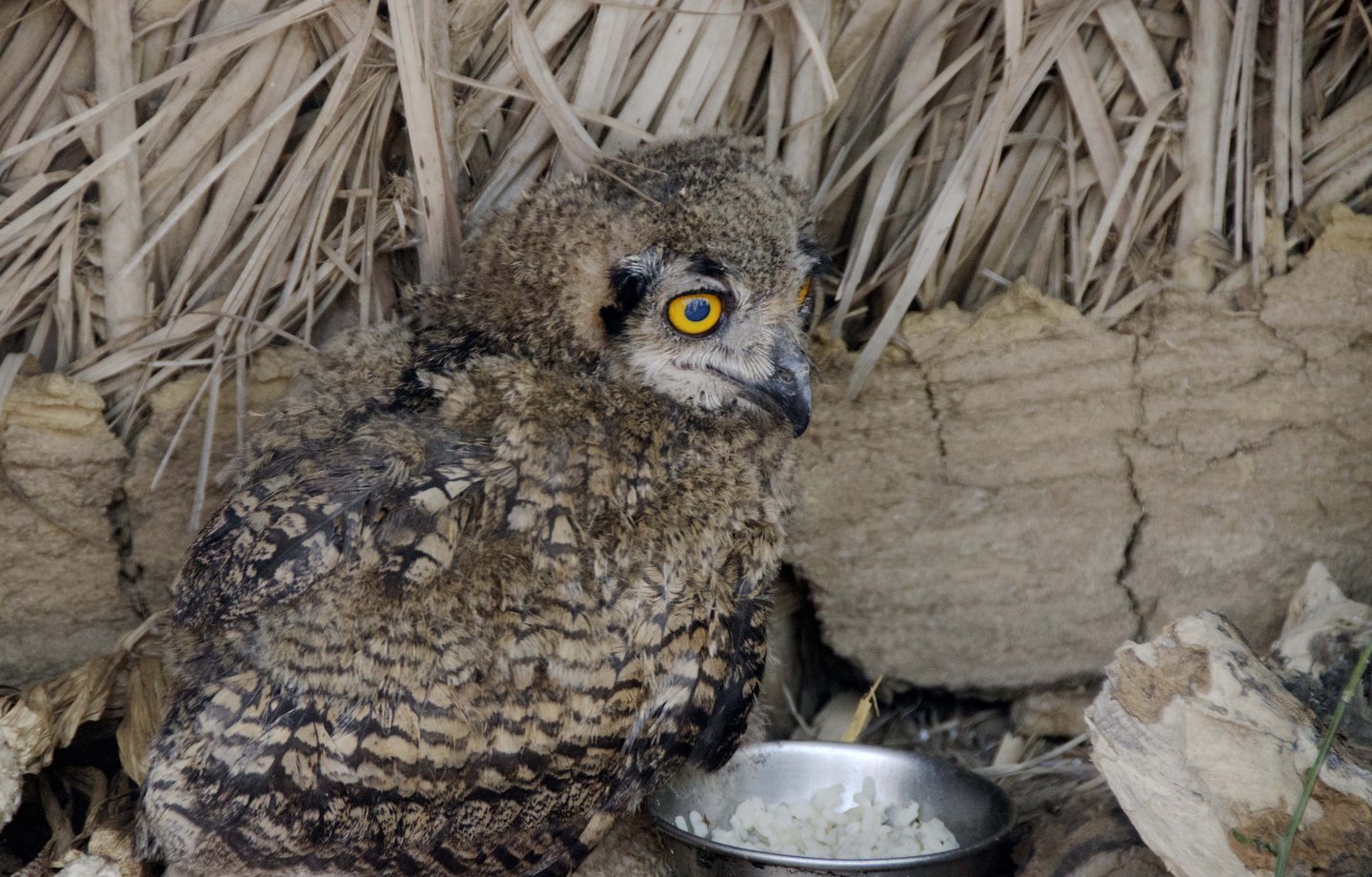 It is not the first time someone in the village has kept owls. In the past , Murmu’s neighbours say, ‘brokers’ have come and paid for the birds. This time too, Madanlal expects a broker to turn up and pay as much as Rs. 50-60,000, he says, for each bird. He is not sure what will happen to them thereafter. “I don’t know exactly, they use their kidneys maybe… the doctors use the owls for prayog [laboratory experiments].”

And so Sidhu and Kanhu will fall once again. This time at the hands of their countrymen.