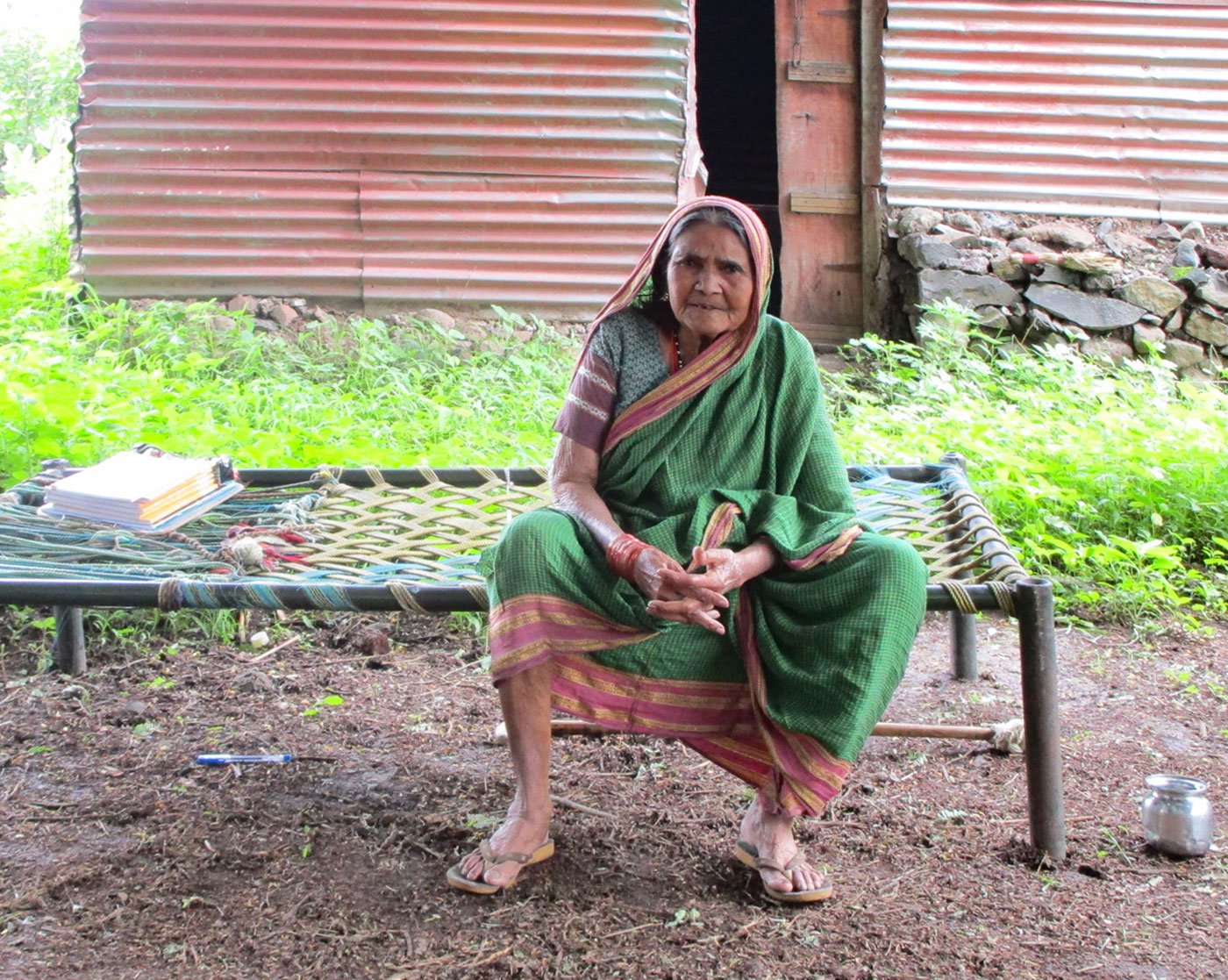 The magical hands of Gunamay dai

Gunamay Kamble, an expert midwife in Osmanabad district, attended hundreds of home births – even those with complications. But her skills born of long experience were devalued in the push for hospital births

“ Chaalun, chaalun , I help the unborn child move towards the birthing canal.”

Gunamay Manohar Kamble’s eyes sparkled as she recalled her days as a dai (midwife), bringing babies into the world. Her 86 years slipped away. She was, once again, the alert and attentive midwife. Describing the process of the baby emerging from the birth canal, she added lightly, “ Haatat kaakana ghalato na, agadi tasa! [Just like how we slip on bangles, that’s it!].” The red glass bangles on her wrists were tinkling as she gestured.

In the seven decades since she first started assisting women with childbirth, Gunamay, a Dalit resident of Wagdari village, had brought hundreds of children in Osmanabad district safely out of their mother’s womb. It is the magic of [the] hands,” said the veteran, who last assisted with a birth four years ago, when she was 82. She was proud that, “My hands have never failed. God is with me.”

Gunamay’s daughter, Vandana, recalls an incident in the Solapur Civil Hospital, when her mother told the doctors to watch her birth three babies that were due to be born by caesarean section. “They said, ‘you are more skilled than us, aji [grandmother]’.” Gunamay smiled recalling their surprise and awe.

Her skills extended beyond child birthing and she would get calls from places all over Maharashtra, such as Solapur, Kolhapur and Pune. “My grandmother is very good at removing things that sometimes get stuck in a child’s eyes, ears or nose. Be it a seed, a bead, people bring the child to her to have it removed,” said her proud granddaughter, Shridevi, when PARI met them a few months ago. The midwife saw these jobs as very much a part of her work as a dai , along with her knowledge of herbal remedies for stomach aches, jaundice, cold and cough, fever and more. 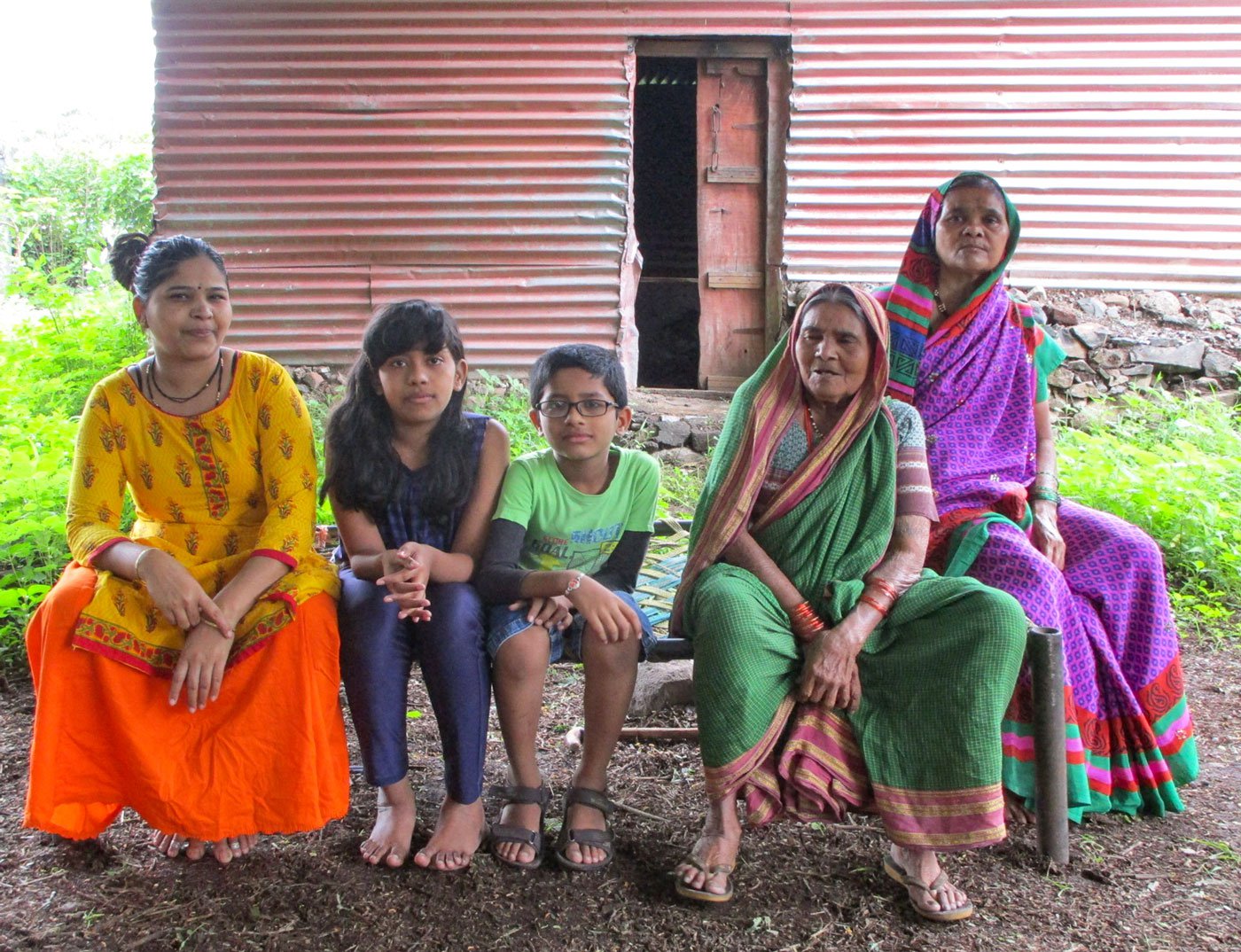 Gunamay Kamble (in green saree) with her family in Wagdari village of Tuljapur taluka . From the left: granddaughter Shridevi (in yellow kurta); Shridevi's children; and Gunamay's daughter Vandana (in purple saree)

Dais like Gunamay are traditional birth attendants (TBAs) who serve as midwives. They don’t have any modern training or certification, but women from mostly Dalit families have assisted several generations of mothers in villages and urban low-income settlements, assuring them, “Shaabut baalaateen hotees [You are going to get through this. It will all be okay].”

But in the last 3-4 decades, state incentives for institutional births have silenced dais . According to the first National Family Health Survey, in 1992-93 (NFHS-1), less than half the births in Maharashtra took place in a health facility. Three decades later, in 2019-21, the figure is 95 per cent (NFHS-5).

A skilled and experienced dai like Gunamay, who could birth twins and handle a breach presentation or a stillbirth, has been reduced to a person responsible for referring a pregnant woman to a public hospital or accompanying her to a health facility. For this the dai receives Rs. 80 per referral.

Despite her diminished role in child birthing, Gunamay had said, “People in the village are fond of me and call me for tea or give bhakar. But we do not get wedding invitations. We are given food after the programme is over.” Her social experiences underscored that while her work was acknowledged, caste barriers for Dalits like her remained.

Born in a Dalit family belonging to the Mang community, Gunamay’s father was educated and her siblings went to school, but she was married at the age of seven. She was sent to live in her marital home once she began menstruating. “I was just 10-12 years old, still wearing a zagaa [frock]. The Naldurg fort was conquered the year I came here to Wagdari,” she had recalled, referring to the year 1948 when the Indian Army took over the fort then under the Nizam of Hyderabad’s rule.

Wagdari is a small village of 265 households (Census 2011) in Tuljapur taluk a of Osmanabad district, and Gunamay lived on the outskirts of the village in a Dalit vasti (locality). Her one-room house was added with two more rooms in 2019 under the Ramai Awas Yojana, a state housing scheme for Dalits. 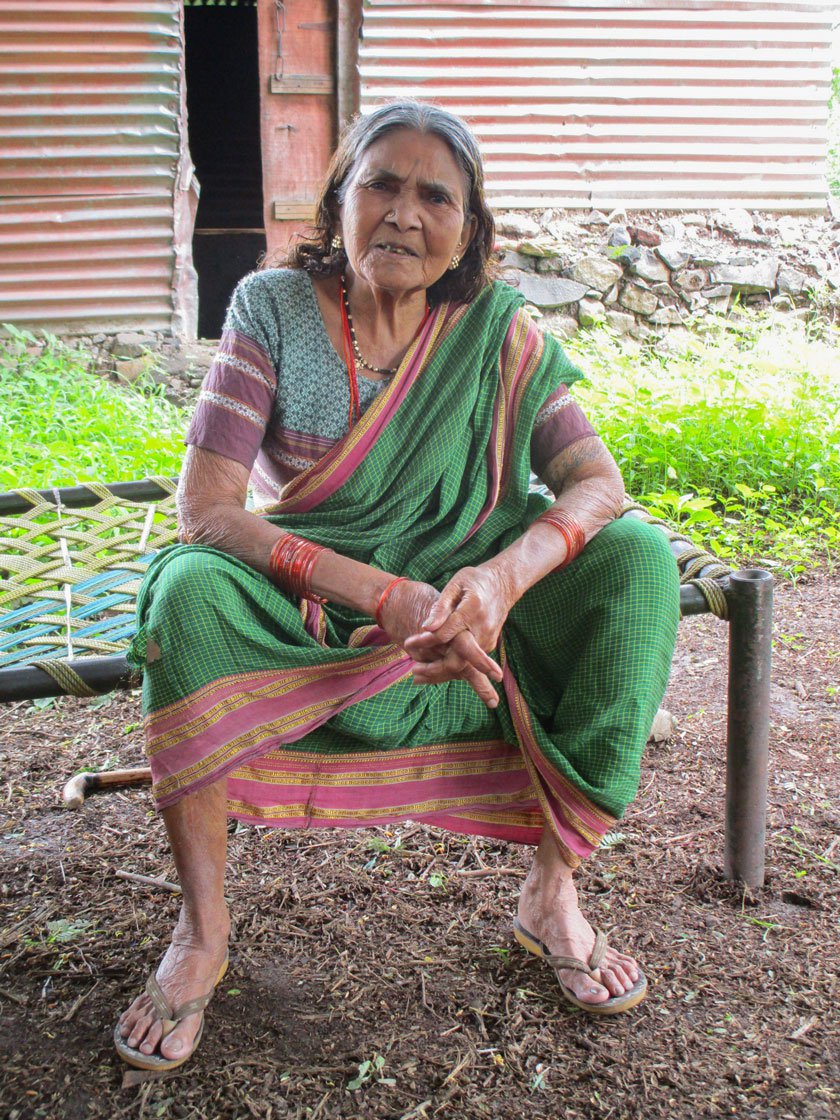 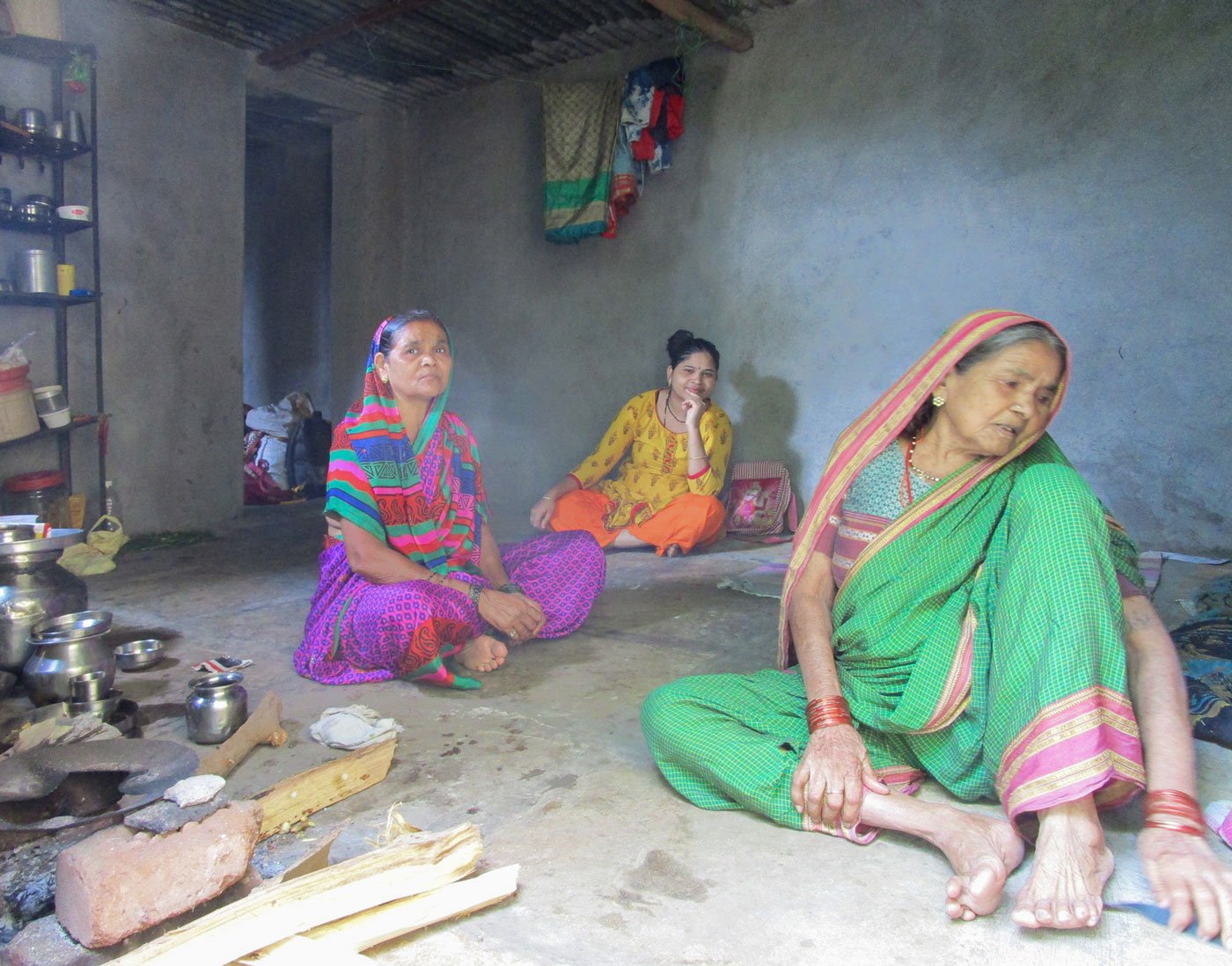 Left: Gunamay sitting on a metal cot in her courtyard . Right : Vandana and Shridevi with Gunamay inside her home. When she fell ill in 2018, Gunamay had to leave the village to go live with her daughters

When the young Gunamay came to the village as a bride, she lived with her in-laws in a mud-walled house. The family owned no land and her husband, Manohar Kamble, served the village and its chief. For his work, the family received payment in balutedari – a traditional barter system where they were paid in agricultural produce once a year.

But it was not enough to feed the family and so Gunamay raised goats and a few buffaloes; she also sold ghee made from the milk. Later, she worked under the Employment Guarantee Scheme introduced after the drought in 1972, took up daily wage work, and attended births.

“Child birthing is very risky work. It's hard to get a thorn out of one’s foot and here a whole body is coming out of a woman!” she had pointed out. But despite the serious and important nature of the work she did, “people paid on a whim,” she said. “Some gave a fistful of grain; some gave ten rupees. Somebody from a far-off village may have given even a hundred rupees.”

She would stay with a new mother through the night, bathe her and the baby, and only then leave. “I didn’t even drink tea or eat in anybody's home. I just took home that handful of grain, tied in the end of my sari ,” she recalled.

Eight years ago, Gunamay remembered that she was paid Rs. 10 by a lawyer’s family. She had sat through the night and assisted in the difficult birth of the daughter-in-law of the house. “In the morning, she gave birth to a baby boy. As I started to leave, her mother-in-law gave me 10 rupees,” said Gunamay. “I returned the 10 rupees and told her, ‘These bangles that I wear cost 200 rupees. Take your 10 rupees and buy a packet of biscuits for a beggar’.” 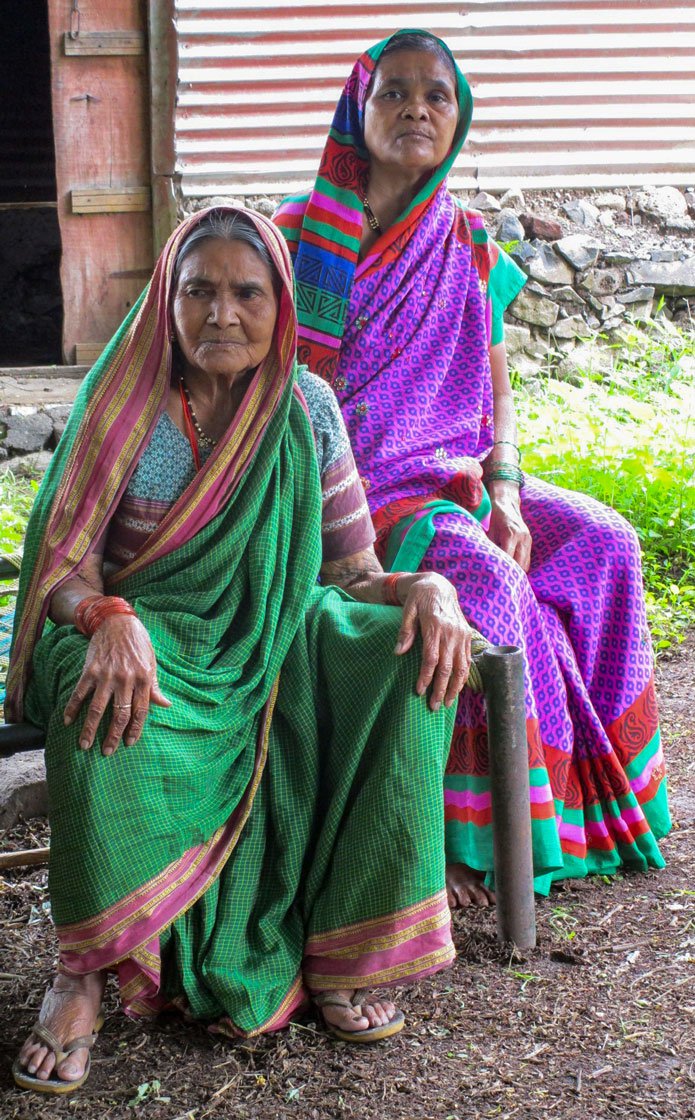 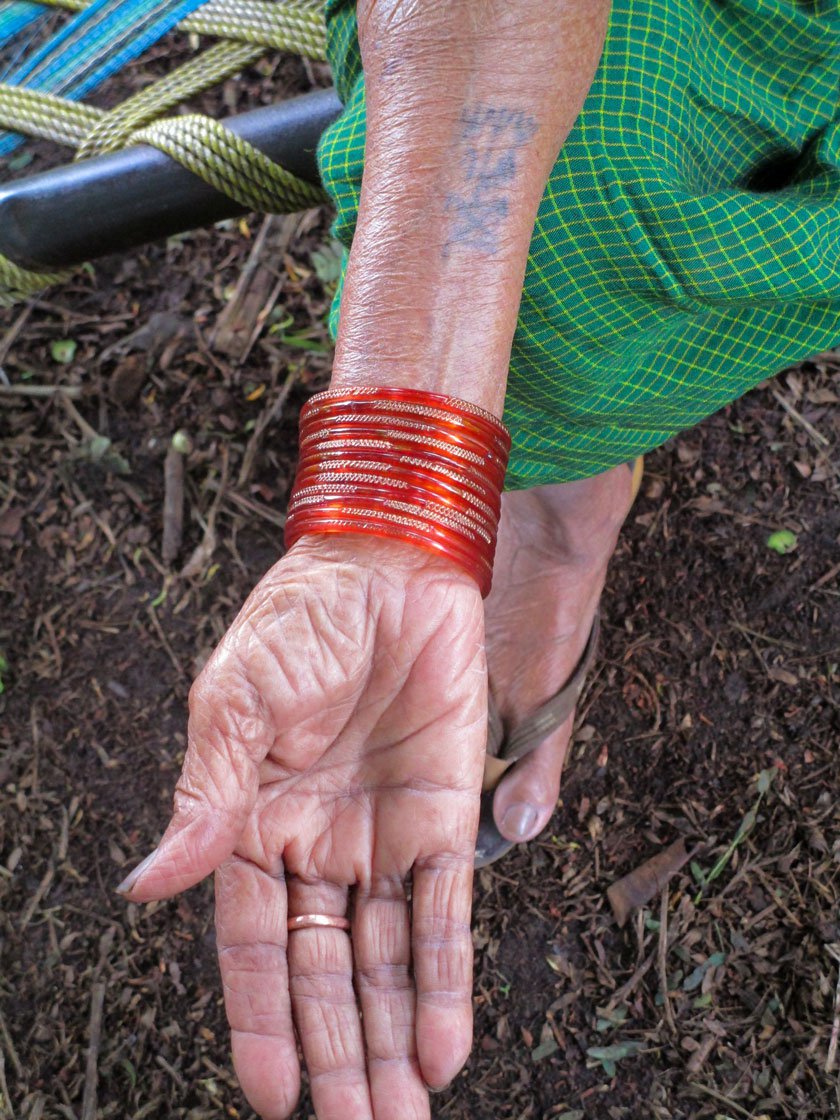 Left: Gunamay's daughter Vandana (in purple saree) says dais are paid poorly. Right: ‘The bangles I am wearing cost 200 rupees,' Gunamay had once told a lawyer's family offering her Rs. 10 for attending a birth. ‘ Take these 10 rupees and buy a packet of biscuits for a beggar '

The lack of acknowledgement and the paltry wages put off Vandana, Gunamay’s eldest daughter, from becoming a dai . “No one pays, not people, not the government. Why should I labour when there is no value? I had to feed my four children so I stopped and went for wage work,” said Vandana, who lives in Pune currently. She was trained by Gunamay but now only helps out with bathing a new mother and the newborn.

Vandana and her three sisters have a total of 14 children, and all but one was birthed by Gunamay. Gunamay’s third daughter underwent a caesarean procedure at a hospital that her husband had taken her to. “My son-in-law used to be a school teacher [now retired]. He just didn’t have faith [in home birthing and her skills],” she explained.

Gunamay had noticed with dismay how in the last 2-3 decades, an increasing number of women were opting to or being advised to undergo caesarean procedures. In Maharashtra, the number of such operations has been on the rise. NFHS-5 says that in 2019-2021, over 25 per cent of pregnant women underwent a caesarean section surgery at a public hospital. The figure for private hospitals was even higher – 39 per cent of women admitted for child birth had had the surgery.

“See, pregnancy and childbirth are natural processes,” Gunamay had said. She had strong views on what she termed unnecessary procedures like cutting and stitching: “They slice and then they stitch. Do you think a woman can get up or sit up after that? A birthing woman’s parts are delicate and tender.” She had repeated a common notion among midwives: “One should never cut the cord before the waar [placenta] is out, because [if you do] the placenta goes and gets stuck to the liver.”

Much of her learning about childbirth, she told PARI, was derived from her own time as a young mother. “I learnt from the births of my own children. To push hard during contractions, rub the [hers; the mother's] belly and push the child out,” she had said, recalling her teenage years: “I didn't allow anyone else near, even kept my mother outside, and when it was over I would call out.” 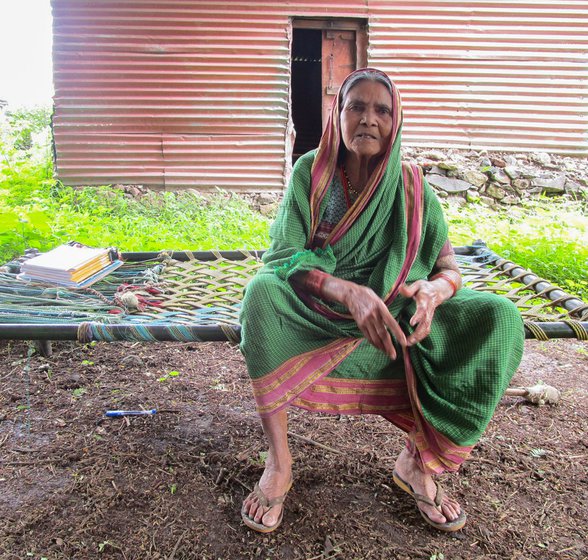 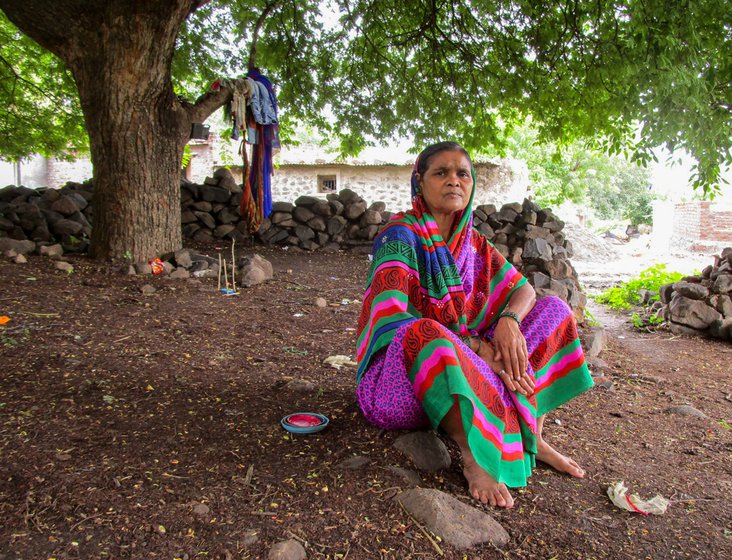 Gunamay (left) practiced as a dai for most of her 86 years . A lot of her learning came from her experiences of giving birth to Vandana (right) and three more children

Gunamay’s skills had been sought for stillbirths too. Recalling the case of a young woman who was in labour, she said, “I sensed that the child had died in the womb.” The doctor from a nearby hospital said the mother would need to go to Solapur for a caesarean operation to remove the dead baby. “I knew they were not in a position to afford it. I told them to give me some time, and by rubbing and pressing her belly I got the child’s body out,” she said. “This is especially difficult as there are no contractions,” added Vandana.

“I used to help women with a prolapsed womb, but only if it was just after birth. Later, one must see a doctor,” said Gunamay, who knew when to step back and hand things over to a medical professional.

A nationwide programme to train dais was launched in 1977 and around the same time many voluntary organisations also started training dais as part of their health programmes.

“I went to Solapur for training, but I don’t remember when,” Gunamay had said as she walked slowly out of her house to sit under the tamarind tree outside. “They taught us about cleanliness – clean hands, clean blade and clean dhaaga [thread] to cut the umbilical cord. I used a new kit for each birth. But we didn’t follow all that they taught,” she had said frankly, as her own knowledge, skill and experience surpassed it all.

In 2018, after an episode of fainting and a fall, Gunamay started living with her daughters – either in Kasai in Tuljapur block, or in Pune city. But she liked it best at her home in Wagdari, where, she had said, “I took over the work of child birthing in the same way that Indira Gandhi took over the reins of the country.”

Postscript: Gunamay Kamble was in poor health for the last few months. She died on November 11, 2022, even as this feature was being prepared for publishing.

An earlier version of this story appeared in As We See It , a Tathapi-WHO India publication, in 2010.