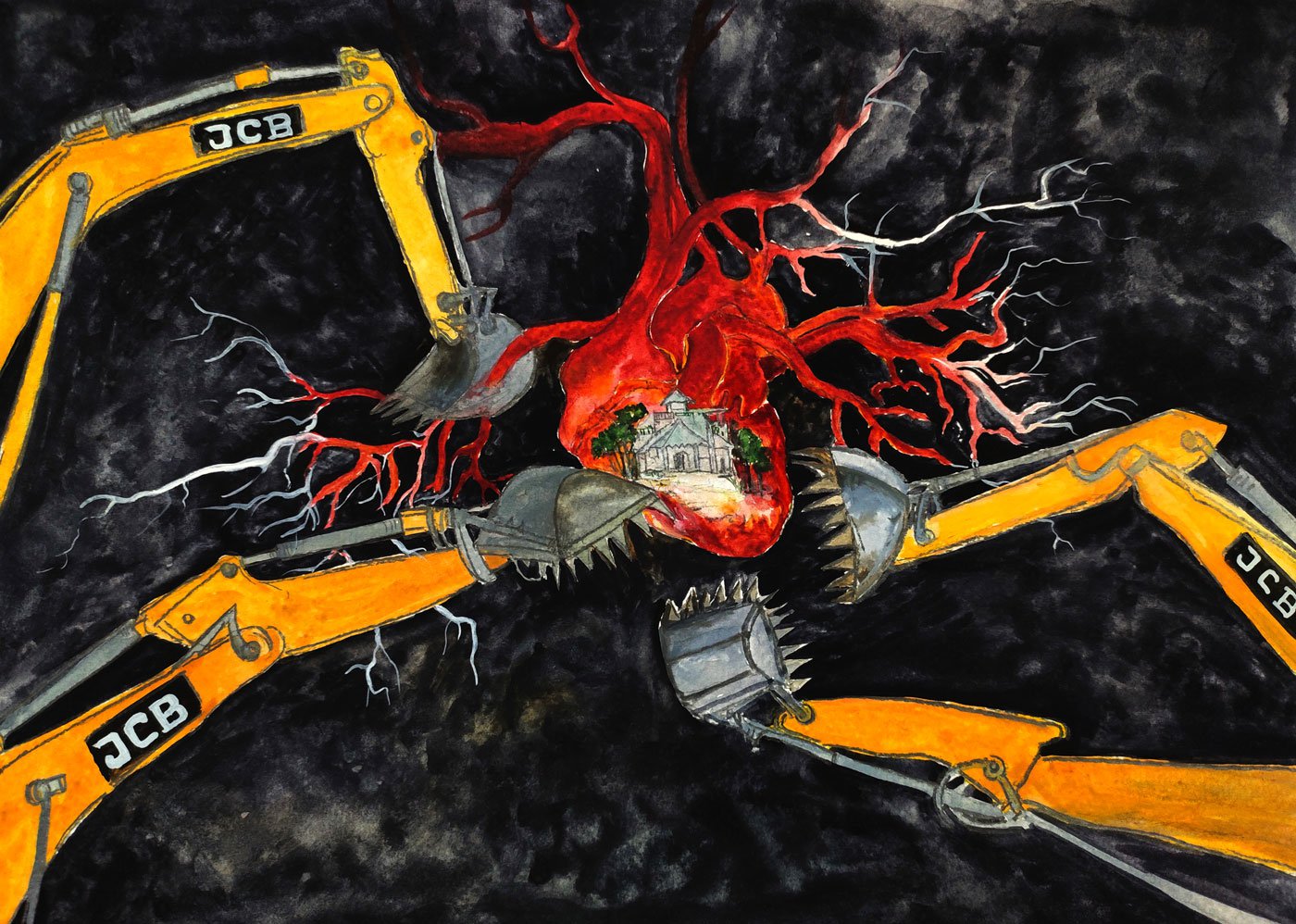 The beast, the begum and the bulldozer

‘For every heart the beast plucked, grew a new heart, a new flower, a new life, a new world’: a poem provoked by a series of selective demolition of houses and buildings across the country

A torn piece of paper flies across the jagged wall in the wind, the words ‘illegal’ and ‘encroachment’ barely visible on its pale yellow surface, the ‘eviction’ it warned of smeared with mud. A country's history cannot be contained within its walls. It floats beyond tenuous borders and into the ether – across emblems of oppression, bravery, and revolution.

She stares at the heaps of stones and bricks on the street. That’s all that is left of the shop that turned into her home at night. For 16 years, she would sip chai here in the evenings and sell chappals to many during the day. Her modest throne on the footpath lies amid the shreds of asbestos roof, slabs of cement and bent steel rods – like a ravaged tombstone.

There once lived another begum here. Begum Hazrat Mahal, the Queen of Awadh.  She valiantly fought to free her home  from British rule and was forced to seek refuge in Nepal. This anti-colonial freedom fighter, one of India’s first, remains long forgotten. Her legacy tainted and erased but for a forlorn cold stone in Kathmandu, on the other side of the border.

There are countless such graves, skeletal remains of resistance buried deep within the Indian subcontinent. But there are no bulldozers to remove the mud of ignorance and hatred, no machines to excavate these forgotten fists of resistance. No bulldozers that can smash colonial history and replace it with the voices of the oppressed. No bulldozer to stand in the way of injustice. Not yet.

A strange beast appeared
in my neighbour’s courtyard,
prancing in his yellow hide.
Blood and flesh from the last meal
still stuck to its claws and teeth.
The beast gave a howl,
raised his head
and pounced on my neighbour’s chest.
Reached through her ribs,
tore into her heart.
Unflinching, the King’s favourite pet
plucked out her heart
with his rusted hands.
Oh, the beast indomitable!
But to its dismay, a new heart grew,
in the dark hollow of my neighbour’s chest.
Roaring, the beast tore another heart.
When one more in its place just grew.
One more red, teeming with life
for every heart devoured there was one anew.
a new heart, a new seed,
a new flower, new life,
a new world.
A strange beast appeared
in my neighbour’s courtyard,
A dead beast with hands full of stolen hearts.