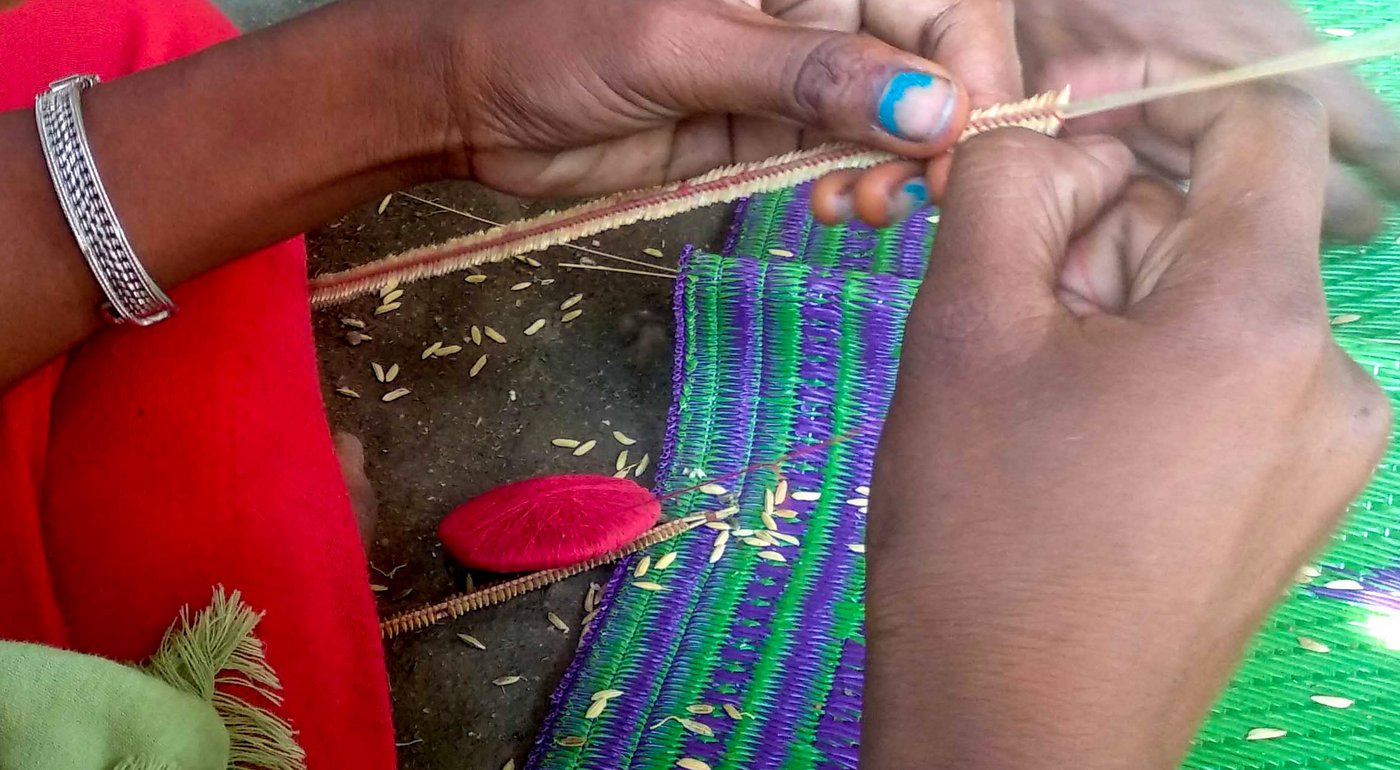 The bards of Nuapada and the goddess of grains

Although their craft tradition is waning and needs state support, the Debgurus in Odisha continue making idols and objects with paddy, and go from village to village reciting the Laxmi Purana

Sitting on a mat in the doorway of their two-room mud house, Kanti Debguru and her daughter Dhanmati are engrossed in knitting unhusked rice grains with red yarn. They then fasten it on a sliver of bamboo and stitch together garlands. These will be used by Kanti’s husband, Gopinath Debguru, to craft an idol of Goddess Laxmi.

Gopinath comes out from the house holding a string instrument. As Kanti and Dhanmati continue making paddy garlands, he plucks at the string and sings verses from the Laxmi Purana . “We practice the tradition of making paddy figures of Goddess Laxmi, the goddess of grains, and sing her glory,” explains 35-year-old Kanti. She and her family belong to the Debguru or Devgunia community of traditional bards, and live in Khudpeja village of Nuapada district in Odisha.

The Debgurus learn the Laxmi Purana from their forefathers, says 41-year-old Gopinath, showing me a palm-leaf manuscript of the text. The Laxmi Purana is a 15th-century poem composed by Balarama Dasa. It revolves around the mythology of Goddess Laxmi and her marriage to Lord Jagannath, and describes the rituals and fasts she observed. Gopinath sings the poem while strumming the single-stringed Laxmi veena (also known as the Brahma veena or Debguru bana ). The Debgurus craft the instrument, which is nearly three feet long, from bottle gourd and bamboo. 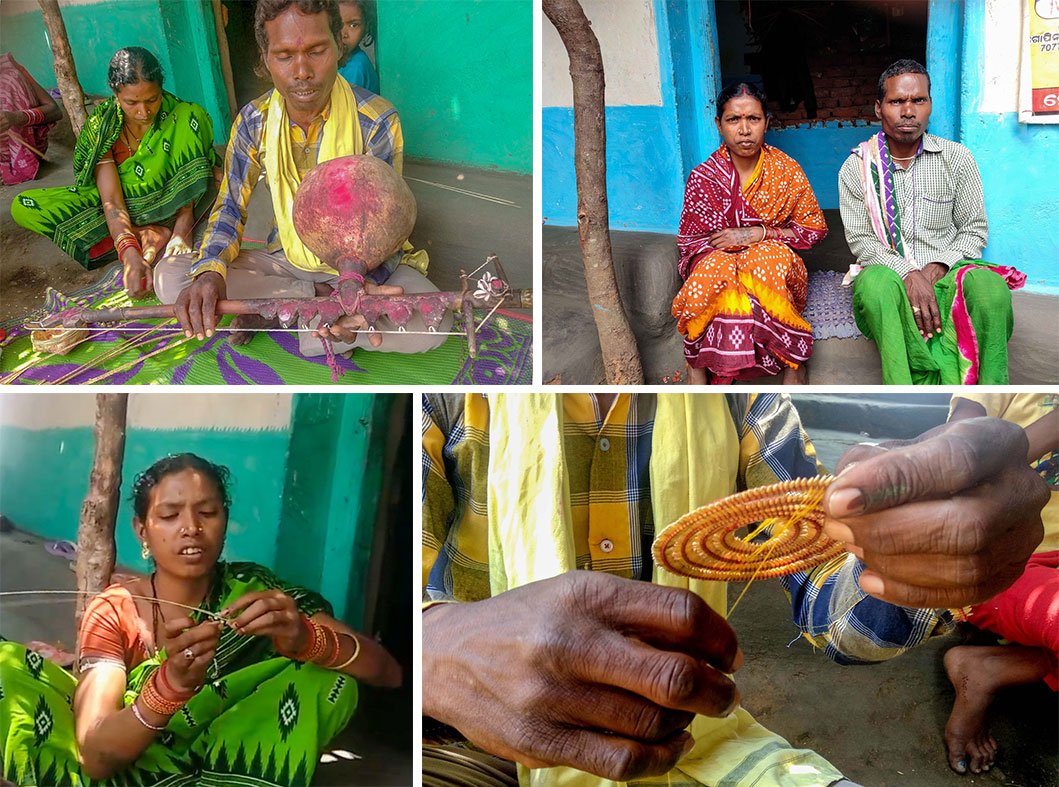 Top left: Gopinath Debguru sings a verse from Laxmi Purana with his Laxmi veena, while Kanti Debguru prepares garlands with paddy. Top right: Kanti and Gopinath at the doorway of their two-room mud house in Khudpeja, where they live with their three daughters. Bottom left: Kanti fastens the paddy with red yarn on bamboo slivers to make the garlands. Bottom right: Gopinath makes the base of the idol with the garlands

Besides singing the Laxmi Purana , the men in Debguru families also handcraft the idols and ritual objects for the worship of the goddess – temple-shaped altars, toy-sized chariots and palanquins, kalasa (urns), and other items – with the paddy garlands knit by the women in their families. They also make objects like mana (a paddy measure), winnowing fans, lotus-shaped items, flower vases and miniature elephant figures. “We have inherited this tradition [known as Dhan Kala or Dhan Laxmi] from our ancestors,” says Kanti.

The bards travel to villages within Nuapada district throughout the year narrating portions of the Laxmi Purana . The narration lasts for about three hours each time, but during the margasira month (November-December), the session can go on for 4 to 5  hours. The Debgurus also give lessons – their audience, they say, is usually married women in the households they visit – on how to observe fasts and other rituals associated with the goddess, and at times teach the Laxmi Purana Suanga , a drama based on the text.

“The work is difficult, but we do it to preserve our tradition. We move from village to village playing the Debguru bana , singing the Laxmi Purana . We present the idols and objects as bhet [an offering] to the households and motivate them to worship the goddess,” says Gopinath.

Some of the devotees accept the idols and ritual objects brought by Debgurus. Depending on the size of the item handed over, the bards receive Rs. 50 to 100 for each item, or they get grains, pulses and vegetables. But the Debgurus say they don’t insist on anything in return. "If she is motivated and becomes a devotee of Laxmi, we get our return,” says Gopinath’s cousin, also called Gopinath, 60, who too lives with his family in Khudpeja village, which is in Nuapada's Khariar block.

The bards travel within Nuapada district narrating portions of the Laxmi Purana. The narration lasts for about three hours each time

Kanti prepares around 40 garlands in three days and Gopinath makes 10 idols in a day. They usually use the paddy that they receive as alms. The bamboo stalks are procured from farmers in the village or from near the river in Khudpeja. At times, Kanti’s also works at brick kilns and on construction sites under the Mahatma Gandhi National Rural Employment Guarantee scheme. During the harvest season in December, she also works in the paddy fields of farmers in the village.

Only two Debguru families – of the Gopinath cousins – live in Khudpeja. Across Nuapada, says the older Gopinath, there are only around 40 families of the community, which is listed as an Other Backward Class (OBC) in Odisha.

In the past, the Debgurus were mainly invited by lower-caste Hindu families to recite the Laxmi Purana . Upper-caste women mostly purchase Laxmi idols from the Debgurus, especially during the margasira month. Over time, their tradition has found acceptance among Dalit and Adivasi communities too. (The text speaks against the evil of untouchability.) 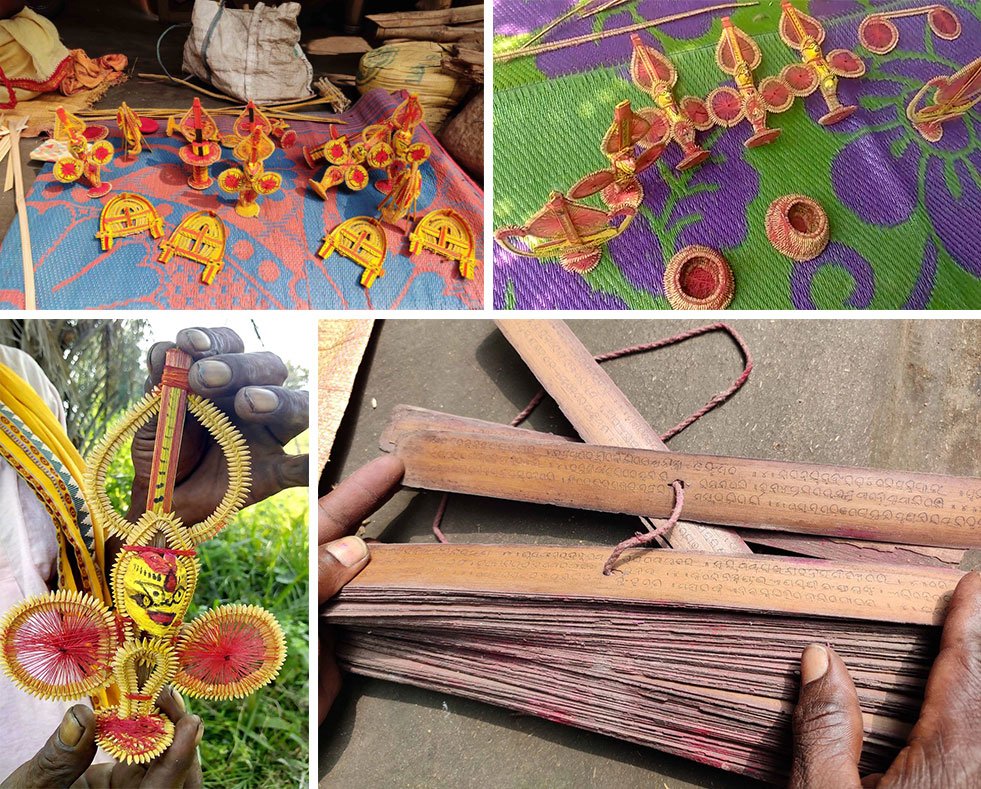 Top row: The paddy craft is a tradition inherited from their forefathers, say the Debgurus – they make altars, urns, toy-sized chariots and more. Bottom left: Gopinath holds up an idol of Laxmi he's made. Bottom right: A palm-leaf manuscript of the Laxmi Purana , which is passed down the generations

Gopinath heads out on his bicycle in the mornings and returns home by evening. But if his destination is far, he stays back for a day or two. His cousin, the senior Gopinath, covers distances more easily on a second-hand moped.

In the past, Kanti would accompany her husband on his journeys. This stopped some 7-8 years ago after they admitted their children – 13-year-old Dhanmati and 10-year-old Bhumisuta – to the government school in Khudpeja. “We sent them to school because education is free now. We want them to study and at the same time learn our traditional craft because it gives us an identity,” says Kanti. The school’s mid-day meal scheme was also a deciding factor. Their youngest daughter, four-year-old Jamuna,  attends the local anganwadi centre.

The Debgurus’ paddy craft tradition, however, is fading out. Kanti says that it needs support from the government. Schemes related to bank loans and rural housing remain out of their reach. “The government provided us with artisan identity cards,” says Kanti. “But what is the use of these cards, if there is no support?”

The reporter wishes to thank Ajit Kumar Panda, senior journalist based in Khariar, for his help with this story.

A version of this article was first published in the September 2019 issue of Grassroots by the Press Institute of India .

Ipsita Ruchi is from Khariar town in Nuapada district. She has recently completed an M. Phil in English from Berhampur University in Odisha.

Other stories by Ipsita Ruchi