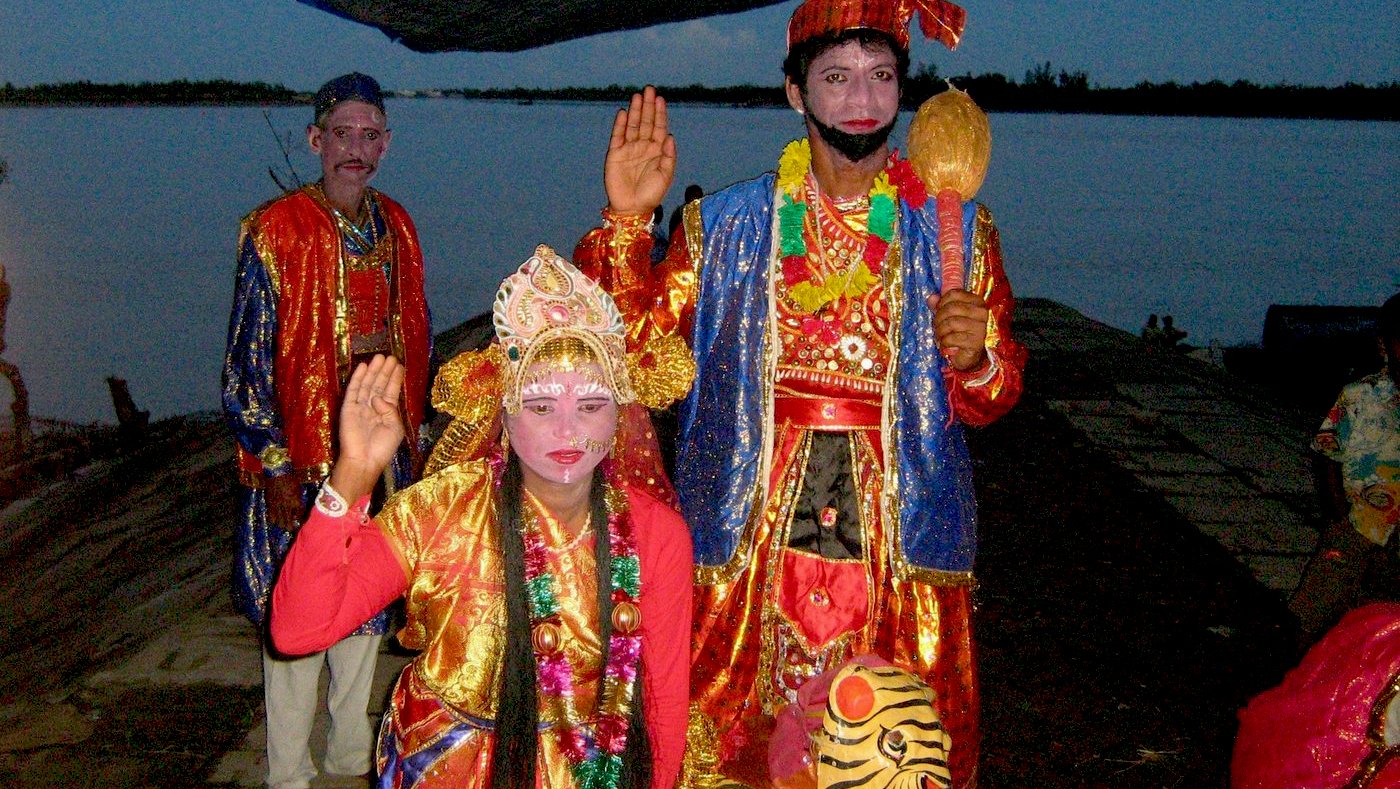 Land of eighteen tides and one goddess

A documentary that looks at how the blended mythologies of Ma Bonbibi and Dakshinrai aid the coexitence of humans, nature and the wild in the Sundarbans

Watch the documentary; it's underlying message is clear

The Sundarbans is the world’s largest mangrove forest, spread over 10,360 square kilometres in the South 24 Parganas district of West Bengal. It has vast stretches of wilderness across saline and fresh water bodies, which is teeming with animals, plants, and avian, reptile and mammal life. This complex and unique region has been declared a UNESCO heritage site.

Here, tales of Bonbibi are passed on from generation to generation, embedded in this land’s folklore. Legend says this deity of the forest was sent from far-off Arabia to the Sundarbans, the 'beautiful forest' – the atharo bhatir desh (land of 18 tides) – to save its people from the tyranny of Dakshinrai (locally also referred to as Dokhin Rai), a cruel Brahmin, who stalked, killed and devoured human beings in the guise of a tiger. Hindu and Muslim mythologies have blended here to ward off the shared perils of life. Religious differences have melded into a way of life only experienced in the Sundarbans.

Thatched shrines bearing the goddess mounted on Raja Dakshinrai, accompanied by her brother Shah Jangali, are a common sight along the riverbed. It is from these shrines that chants of “Ma Bonbibi Allah, Allah” effortlessly mingle with those of “Baba Dakshinrai Hari Hari” as the honey collectors and fishermen pay obeisance before venturing into tiger territory.

The islanders of the Sundarbans believe the forests are meant only for those who are poor and who have no intention of taking more than what they need to survive. They see life here as requiring both a ‘pure heart’ as well as ‘empty hands'. This ‘agreement’ between humans and other inhabitants permits both to depend on the forest, and yet each respects the requirements of all. The ‘purity of the heart’ means they enter the forest without greed or violent disposition. The ‘empty hands’ mean they will enter the forest without firearms.

Bonbibi is a personification of the forest itself and the overriding faith among the villages is a reaffirmation of their commitment to forest and tiger conservation. The Bonbibi jatra (enactments of the folk tales of the valour of the goddess, performed by local artists) has become an art form synonymous with the Sundarbans. These performances are melodramatic, yet the underlying message is clear: “If the forest exists, then the tiger lives and only then can we flourish.”

This documentary tries to focus on the concerns and spirit of the people who inhabit the world’s largest delta – the Sundarbans, the land of 18 tides and one goddess. It was an official selection in the Competition Section of the 13th Mumbai International Film Festival for Documentary, Short & Animation Films, 2014.

Malay Dasgupta is an independent documentary filmmaker; he heads the broadcast management department at the Calcutta Media Institute. Several films on folk art and culture, music and environment, produced and directed by him have been screened at national and international film festivals.

Other stories by Malay Dasgupta