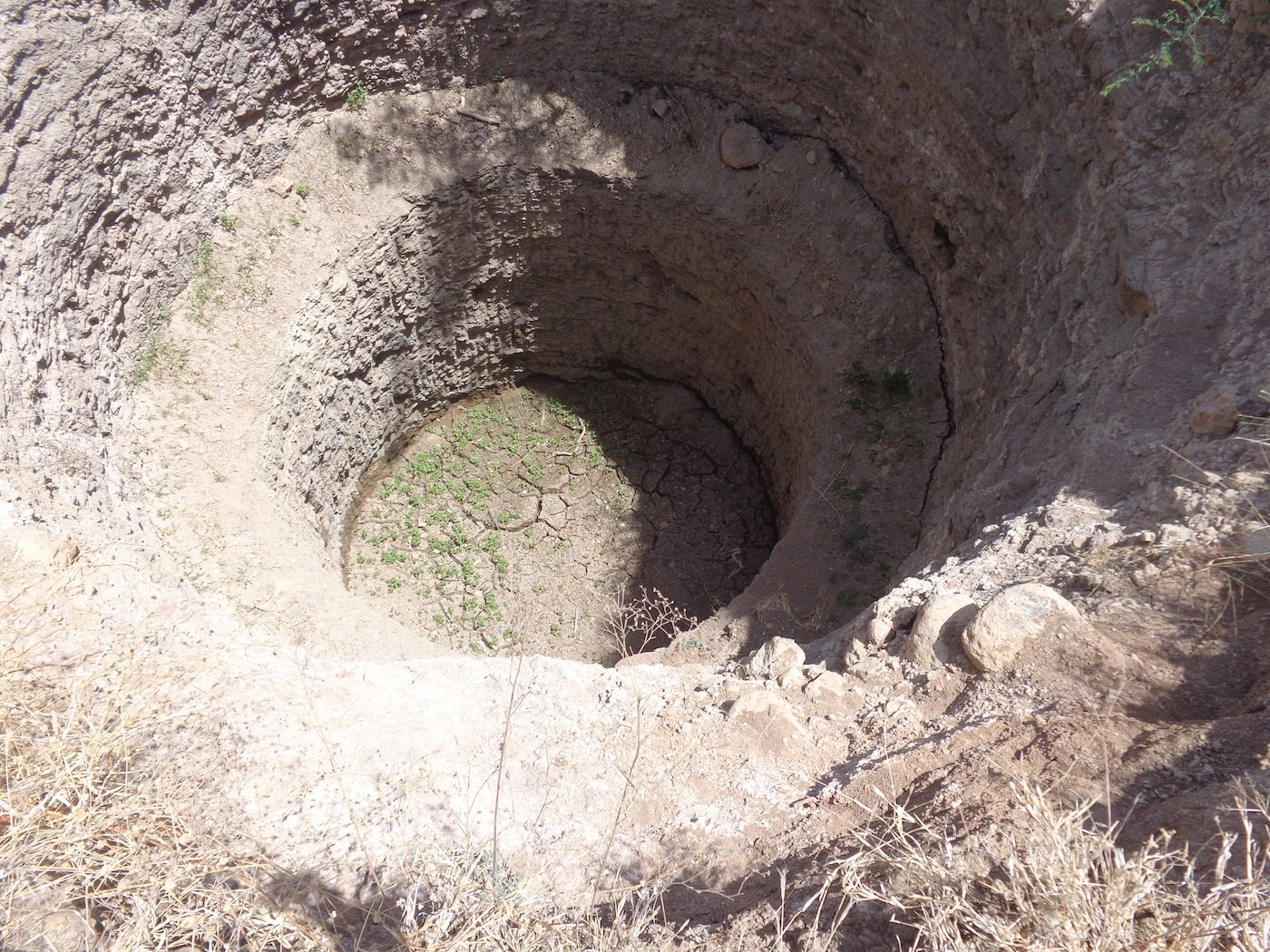 Every day, a half-complete well reminds Karbhari Jadhav of Ganori village of his loans, mortgaged land, debts, and labour, because pay-offs and visits to government offices for years did not bring any sanctioned funds

Karbhari Ramrao Jadhav’s application to sink a well was approved three years ago. For that, he was to have received a subsidy of Rs. 2.99 lakh from the district administration. Instead, he says, “I have never seen that money and have run up a debt of Rs. 1.5 lakhs trying to dig it myself.”

Jadhav, 48, lives in Ganori village in Aurangabad’s Phulambri taluka . He grows cotton and bajra on four acres, for which he gets water from a stream flowing from the nearby hills. But drought is common in the Marathwada region, and his own well, Jadhav thought, would make it easier to maintain his farmland and livestock.

So he submitted an application in early 2013. It required a bunch of mandatory documents related to his land. To get these, Jadhav had to visit various offices – of the talati (village accountant), the gram panchayat (village council) and the panchayat samiti (an intermediary body between the gram panchayat and the zilla parishad or district board). All along the way he was asked for bribes to procure the documents and get the work order from the zilla parishad. “A powerless farmer cannot afford to take on the administration,” he says. 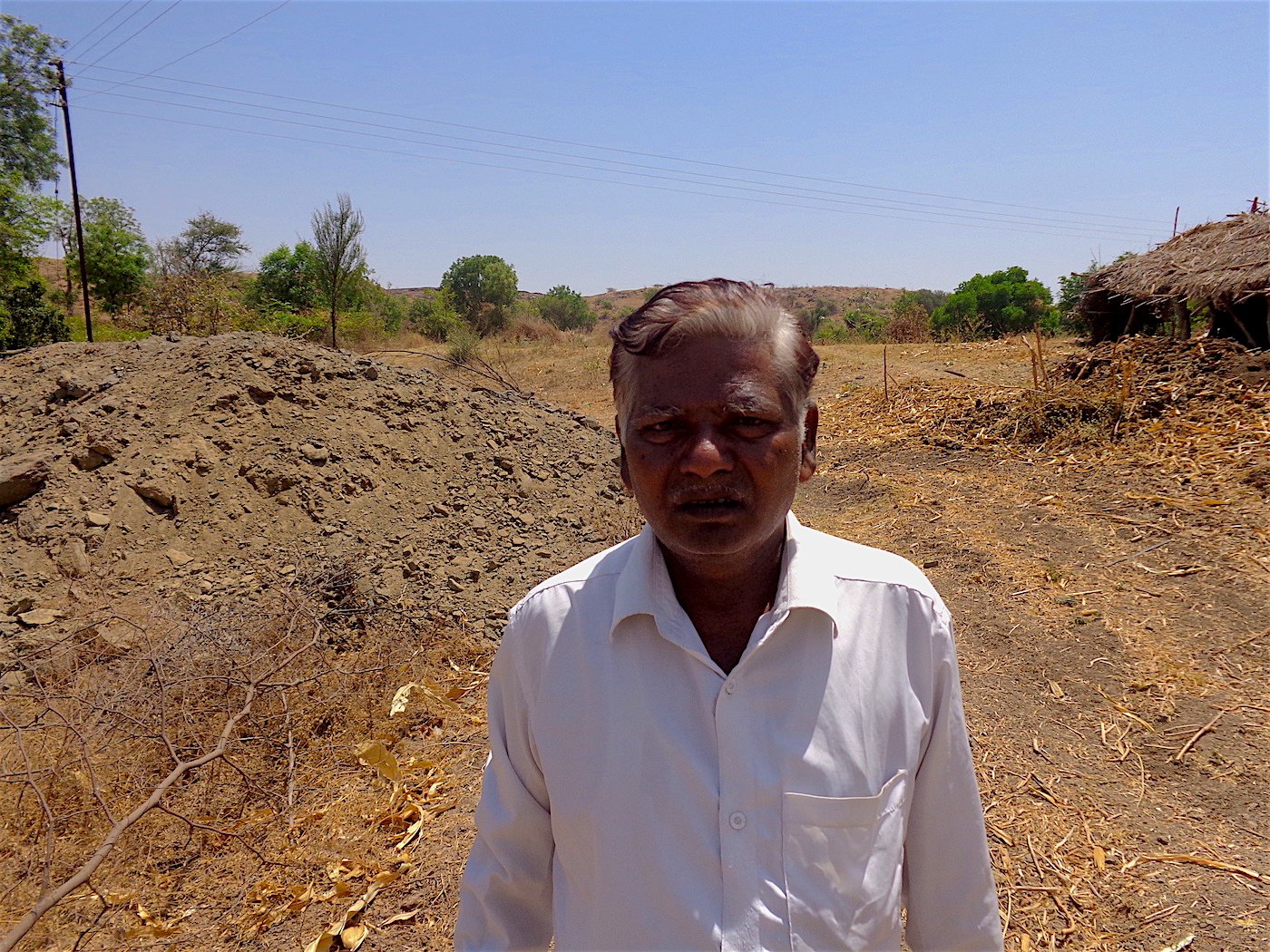 Karbhari Ramrao Jadhav: ‘A powerless farmer cannot afford to take on the administration'

The state government provides a subsidy of Rs. 2.99 lakhs under the Mahatma Gandhi National Rural Employment Guarantee Act (MNREGA) to farmers if their application to dig their own well is approved. From that amount, the farmers are expected to pay labourers and procure materials like pipes. These expenses can be claimed in instalments from the panchayat samiti .

But to get started – even to get his own land papers – Jadhav needed money. He approached a local moneylender, who gave him Rs. 40,000 at an interest rate of 5 per cent per month – a gigantic 60 per cent per annum. During times of drought in the past, Jadhav had taken loans from banks, but this was his first from a private source. “I paid 30,000 in bribes and kept 10,000 for the initial construction of the well,” he says. “I expected to repay the moneylender soon enough. The people I met had promised to get the job done.”

In February 2015, he got the administrative approval, and the work order that allows work to commence came soon after. It strengthened his belief in being able to repay the loan when he received the MNREGA funds. So he hired labourers and vigorously began digging a well not far from his farmland.

But Jadhav did not receive the money from the panchayat samiti in spite of the work order. He kept going to the samiti office at Phulambri, 15 kilometres from his house, on foot or in a shared rickshaw. No one there took note of his complaints. “Running around for the money has dented me not just financially,” Jadhav says, “it has also cost me in terms of work hours.”

The well, meanwhile, had gone 20 feet deep. A few more weeks of work and Jadhav expected to see water gushing out. But the official funds were still not released. The recurring delays ended Jadhav’s promising project. “The labourers backed out, and I do not blame them,” he says. “I could not pay their dues. Why would they continue?”

The half-complete well surrounded by rubble in front of Jadhav’s hut reminds him every day of his losses – of the loans, spiralling interest rates, labour costs and hours of effort – all for a well that has been reduced to a pit.

Watch video: ‘That’s my well, it abruptly came to an end…’

In Ganori though, this story is not uncommon. The village, with miles of farmland under a scorching sun in early April, is located 35 kilometres from Aurangabad city. It is wedged between hills that are permeated by water sources. The streams flowing through the hills have prompted many to apply for digging wells. Years later, like Jadhav, 17 other farmers are still waiting.

Musa Noor Shah, who owns four acres, had to sell 10 of his chickens and six goats to another farmer for around Rs. 50,000 to raise money for bribes. “I paid 20,000 rupees [to various people], after which I got the work order,” he says. “I began sinking the well, but they asked for more money, saying my documents were incomplete.”

Musa, uneducated and around 45, did not even have a bank account before he thought of digging a well. “They asked me to open one so the money for the well would be directly transferred,” he says. “I am paying the price for believing in state schemes. I have more debts and fewer animals now. It has disturbed my financial plans. My daughter’s wedding has been held up for a year.” 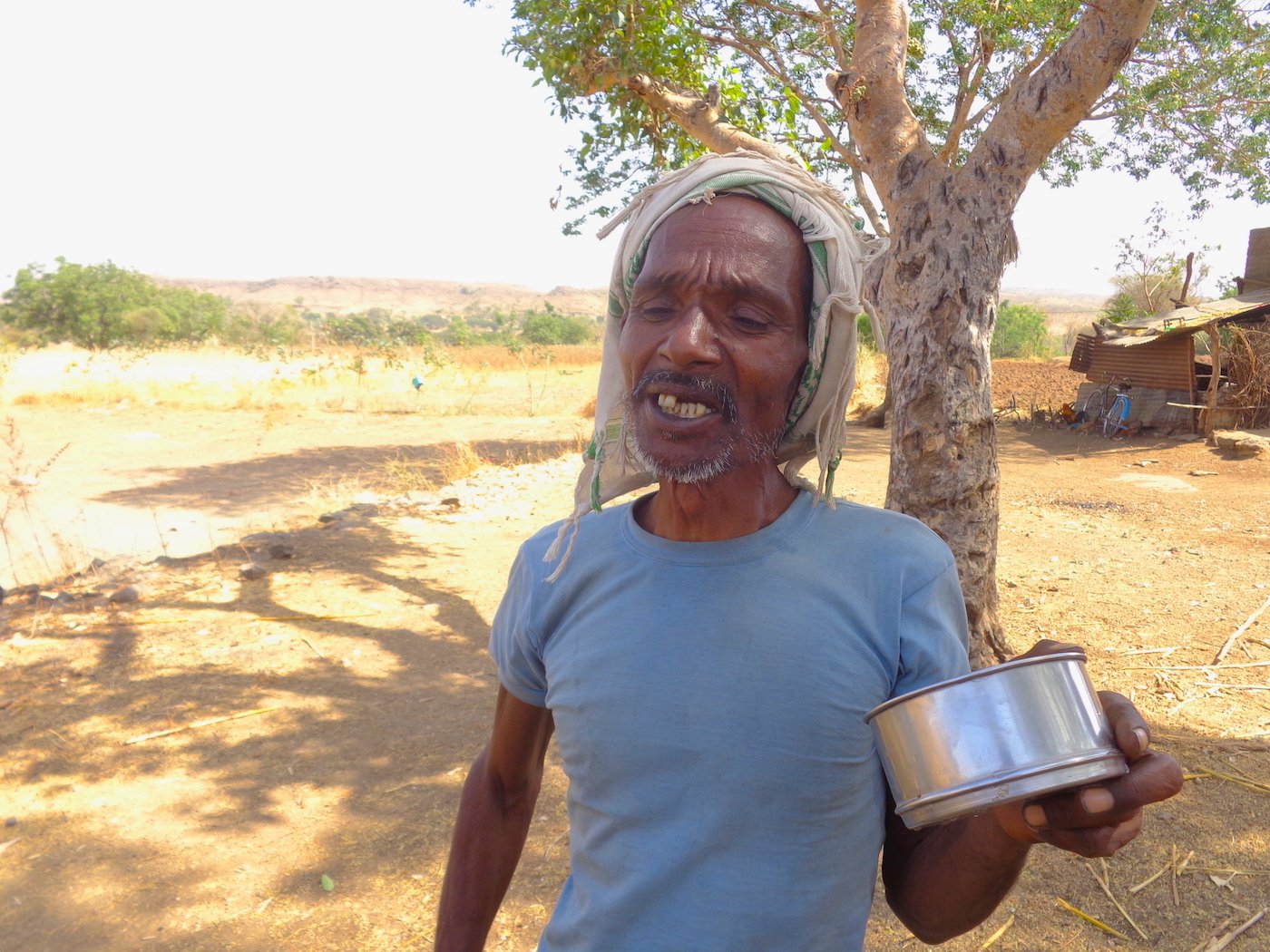 Tired of the injustice, Sunil Rothe, son of a farmer in Ganori who applied to dig a well, barged into the gram sevak’s office in the village in March. He was told that bribes had been paid by thousands of farmers, not just those in Ganori. Sunil recorded the conversation on his smartphone and put it on WhatsApp. After the local news media picked it up, in the second week of April the divisional commissioner Purushottam Bhapkar ordered an enquiry, and the administration has promised to resume work. Meanwhile, out of fear of reprisals, the farmers are denying that they paid any bribes to anyone.

But the enquiry may result in only a transfer or a suspension – and won’t make much of a difference on the ground. The farmers of Ganori made it to the local media only because of Rothe’s recording and because their projects did not move even after they had paid money. Had the funds for their wells been released, it would have been business as usual for the cycle of corruption in which they are caught. Many of the schemes aimed at helping farmers are instead virtually ruining them.

This is reflected in the low number of wells completed even after being approved on paper in the agrarian region of Marathwada. Since the inception of MNREGA in Maharashtra in 2008, according to data from the divisional commissioner’s office, 89,460 wells have been approved in the region, and only 46,539 completed. In Aurangabad district, 6,616 wells were granted permission but only 2,493 completed, and 562 have not even commenced work.

To rectify this dismal conversion rate, the state government and district administration set a target to complete 2,500 wells in Aurangabad district in the 2016-17 financial year. By March 31 this year, only 338 were completed. Similarly, 39,600 private ponds were approved in Marathwada, but only 5,825 have been completed. 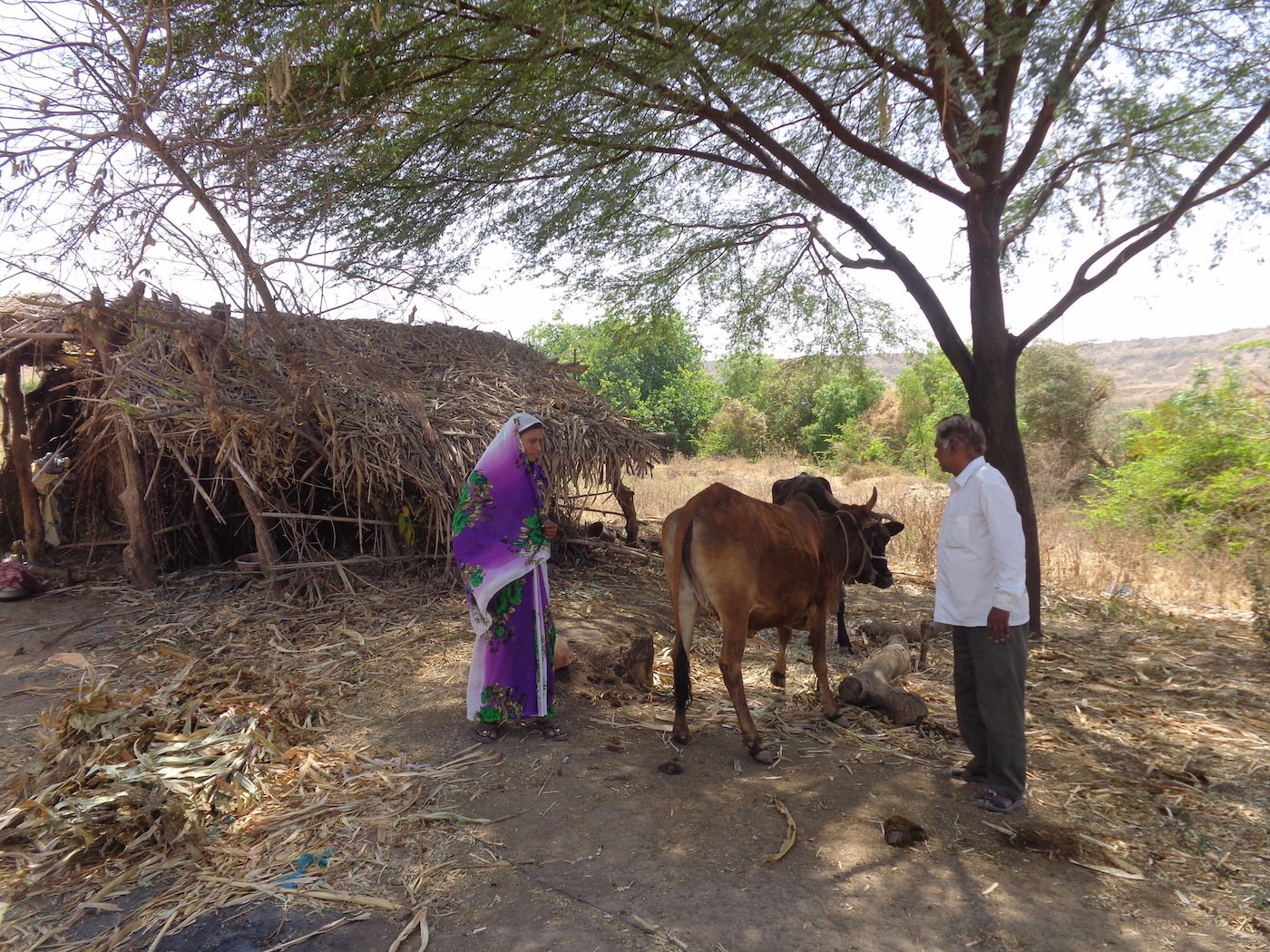 Back in Ganori, Jadhav mortgaged half-an-acre of his land in April 2016 to a  moneylender for Rs. 40,000 to pay labour costs that had run up to Rs. 60,000. He managed to clear the dues, but has not been able to earn the land back. He sold two of his four cows for Rs. 30,000 last year to raise money for the farming season; for this year, he needs more money.

“Before I dreamt of having a well of my own, I did not have a private loan on my head,” Jadhav says. “This well has ruptured my financial cycle. The interest rates are mushrooming, and I have to raise capital now for pre-monsoon preparations for the kharif season. I wonder who will give me credit now…”