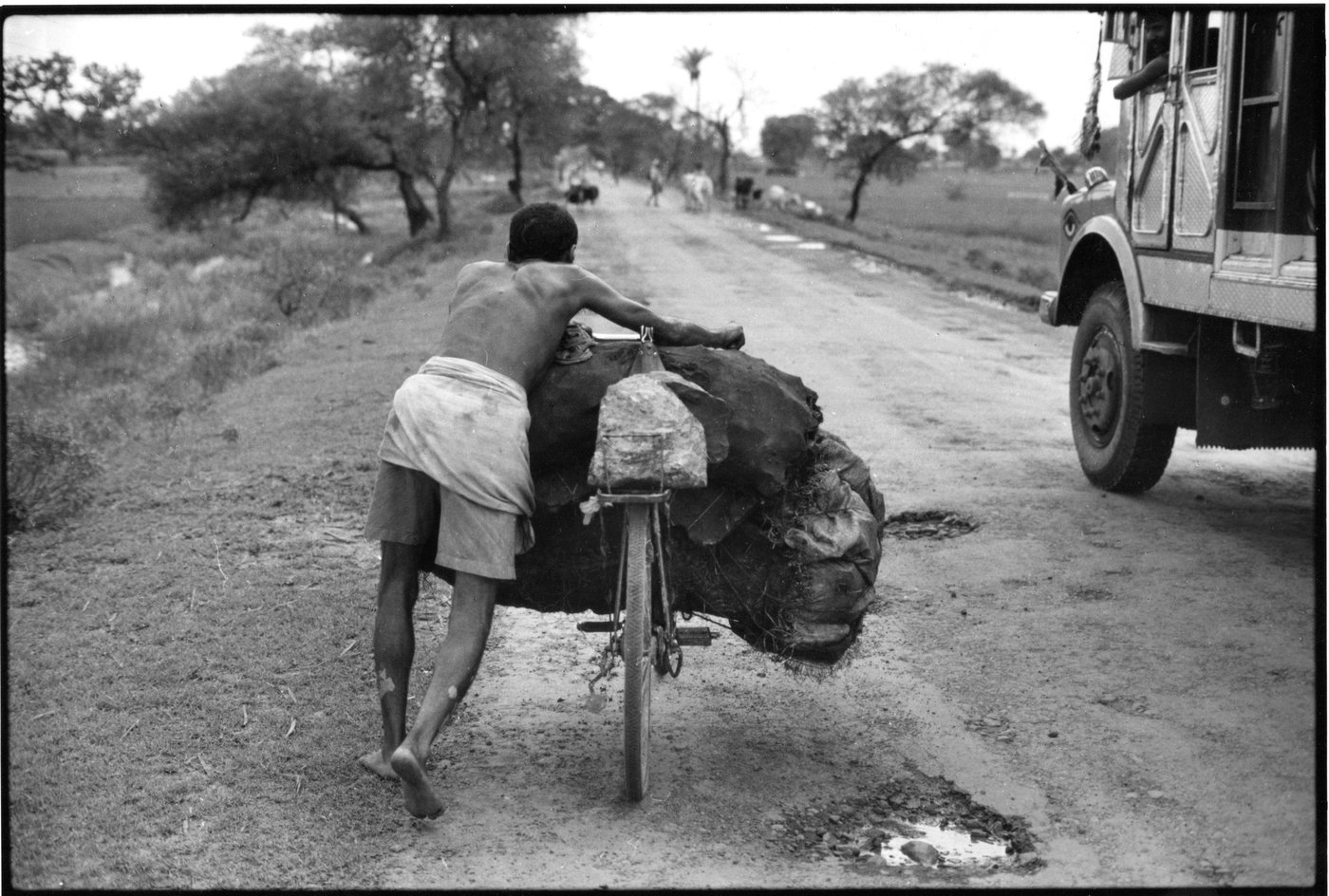 Koilawallahs cart quintals of scavenged coal from mining dumps on their modified bicycles to Godda. For this strenuous three-day walk, they earn barely a third of the minimum wage for manual labour in Bihar

Kishan Yadav pays Rs. 1,200 for a bicycle with one pedal. This odd transaction concluded, he spends Rs.200 to reinforce its bars. Then, he either removes the chain or hangs it loose and tears the seat upwards, towards the sky.

Yadav is now ready to use his bicycle. Not so much for cycling as yet – that can be difficult without a chain – but as a trolley for carrying up to 250 kilograms of coal across distances of 40 to 60 kilometres. For his hazardous labours, he earns up to Rs. 10 a day, barely a third of the minimum wage in Bihar.

Yadav will go from Lalmatiya to Godda and back, taking fully three days in walking, resting and hawking time. A more strenuous form of self-employment is hard to think up, yet nearly 3,000 families in Godda are dependent on it.

Not all the koilawallahs , or cyclewallahs as they are known, will remove one pedal or the chain, but they will reinforce the bars and tear the seat upwards. “They will learn,” says Yadav, a trifle contemptuously. “That right side pedal will break, and the chain, if not loosened, will cause obstruction.”

Only after he sells his coal can Yadav restore the pedal and chain and cycle back to Lalmatiya, where he buys his stuff. He cannot do this crushing trip more than twice a week. Sometimes, the koilawallahs journey up to Baunsi in Banka district, 60 kilometres away, or even up to Rajaun in Banka, 80 kilometres away, all the while pushing their huge loads on foot with muscle-tearing effort. Usually, the koilawallahs cart between 200 to 250 kilos, but some claim they occasionally pull even heavier loads. There are also adolescents in their early teens who drag smaller loads.

Officialdom terms their trade an “illegal” activity. Why? Because they purchase coal from scavengers who scour the waste dumps of the Rajmahal Coal Mining Project, Lalmatiya. The mountains of waste soil the project creates contain almost three per cent of low-grade coal.

“In fact,” admits a top Rajmahal project official, “were it not for the scavengers, that coal would remain unutilised in the waste dumps. And, but for the cyclewallahs , would never reach the people of Godda, mostly poor consumers, as an extremely cheap energy source. It is a national saving.”

Issues tend to get confused because there are so many unlawful activities relating to coal-mining. However, three main illegal forms stand out in the extraction and sale of coal:

As a senior Rajmahal official admits: “About 1,000 cyclewallahs function on a given day. No one manages more than two trips a week. If we calculate all the coal ‘illegally’ sold by the koilawallahs in a whole year, it won’t equal two days production at Lalmatiya.”

Starting outside Lalmatiya, I tracked the cyclewallahs along the route to Godda, 40 kilometres away. Though the distance is not much, they need an overnight halt. A physically intolerable journey at the best of times, it seemed hellish in the wretchedly sultry September weather. They moved slowly along miserable roads where they often had to push their back-breaking loads up unyielding inclines.

The koilawallahs move in lines of up to 20. The “fellow travellers” are essential because, if one of them stumbles, he can’t get started without assistance. Besides, each needs help when fording long puddles or mounting steep inclines. I watched Yadav cross one such stretch aided by his friends. He then “parked” his cycle by planting a stout stick under the sacks and went back to help the next man across. 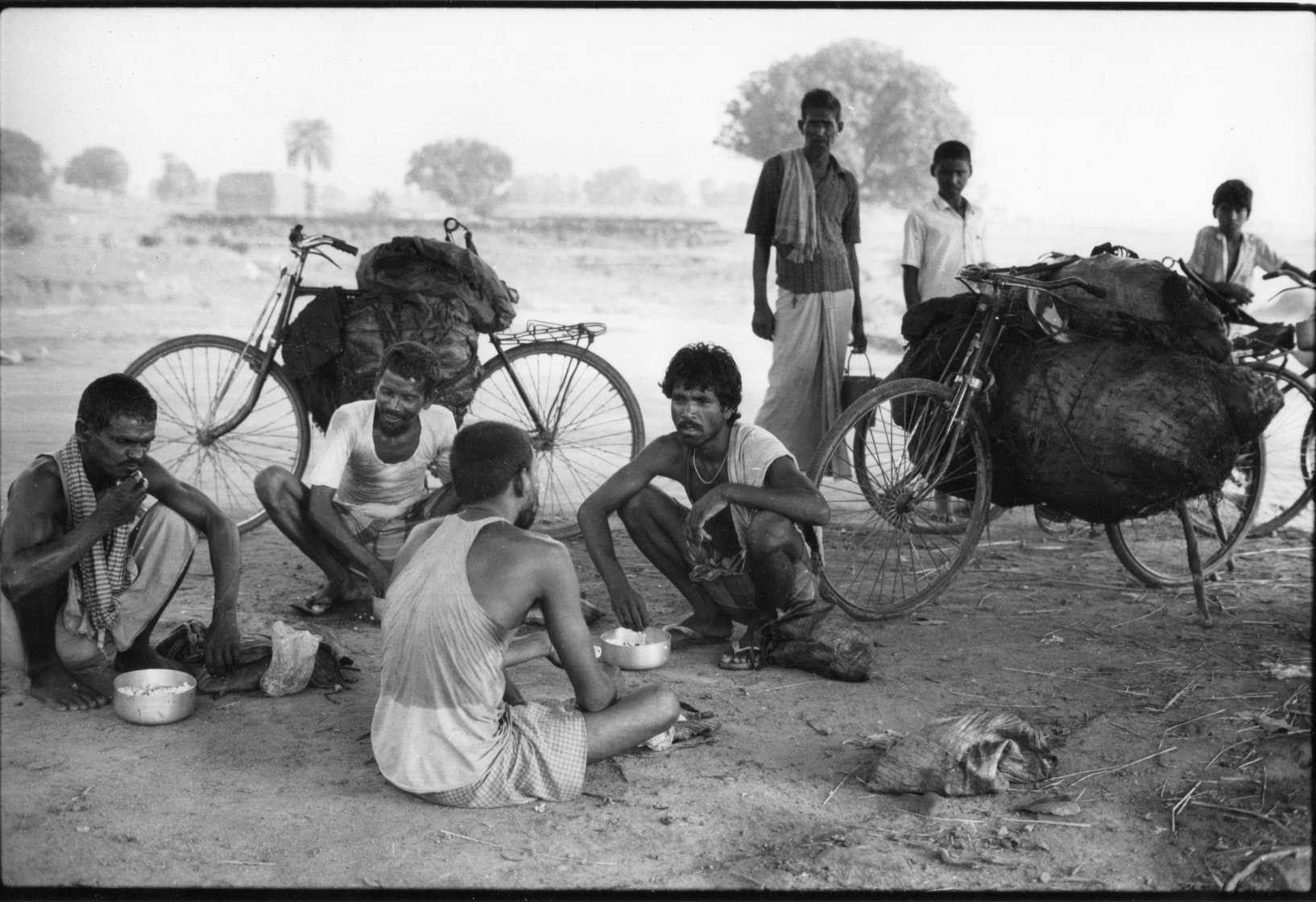 The koilawallahs carry two meals with them. Just a bit of rice with slivers of stale vegetable thrown in – and no pulses. Each will spend a further Rs. 15 on food during the three-days it requires to sell their load and make the journey both ways.

From a group that has stopped on the edge of Godda for a meal, I learn this is a multi-caste activity. Barring Brahmins and Rajputs, almost all castes found in Godda are into “re-cycling” coal. Manto Manjhi is a Dalit, travelling alongside Prahlad and Arun Sah, who are Banias. There are also Yadavs, Koeris, Santals and a host of others. Economic necessity seems to have broken down a few social barriers to some extent.

Why stick to this excruciating trade when even work on government development projects pays more? Aren’t they aware that the daily minimum wage in Bihar is now Rs. 30.50? There is derisive laughter. “That’s for the contractors,” says Manjhi. “Where will they pay us that much for working on government projects? Even for Rs. 20, we would do other work.”

The economics of their own trade is startling and a superficial look can be most misleading. When I first ran into Kishen Yadav, he was collecting Rs. 105 from a woman at her home in Godda town. That seemed a handsome enough sum for a one-shot sale. It was only after days of working with them that the costs involved in the exercise became clearer. The koilawallahs buy up to 250-300 kilos of coal for Rs. 30 at Lalmatiya. Then, they pay Rs. 5 each as rangdari (extortion money) to local thugs. Next, Rs. 10 goes as hafta (regular ‘cut’ or bribe payment) to the police. That is, Rs. 2 per cycle at five police posts between Lalmatiya and Godda. Each spends Rs. 15 on food and necessities during the three-day trip.

"Almost Rs.10-15 per trip goes on maintenance of our cycles,” says Arun Sah. “The ball-bearings wear out rapidly and we also have to change tubes every three months, sometimes even tyres.” Having spent around Rs. 75, they get about Rs. 100 to Rs. 105 for the whole load in Godda (in Patna, it could fetch upwards of Rs. 300). That leaves them with Rs. 30 – their earnings for three days. Since they can do this only twice a week, their weekly earnings will not exceed Rs. 60-70, or 8 to 10 rupees a day. They could get as much as Rs. 150 or more for their load in far off Rajaun. But that’s a hard trip to make more than once a week.

Cyclewallahs are “prime candidates for TB, severe chest pain, torn muscles, respiratory ailments and a number of other illnesses,” says Dr. P. K. Daradhiyar of Godda. He often counts them among his patients. Prahlad Sah lost a month due to illness, fairly common for the koilawallahs . He also lost a bicycle when the police decided to confiscate it.

District officials hope to create a system bringing coal to Godda town by truck. They say the cyclewallahs could then operate within town limits. The koilawallahs are sceptical, fearing this will only lead to their unique form of self-employment being scrapped. This is their survival strategy and they intend to stick to it. Even if it means re-inventing the wheel, Godda style.

Click here for P. Sainath's Talking Album on the Koillawallahs of Godda.

I first visited the district in September 1993. Godda, then, was still a district in Bihar. In 2000 it became part of the newly-formed Jharkhand state).

This story appears in the author's book 'Everybody Loves A Good Drought' (Penguin Books). A version of it originally appeared in The Times of India.