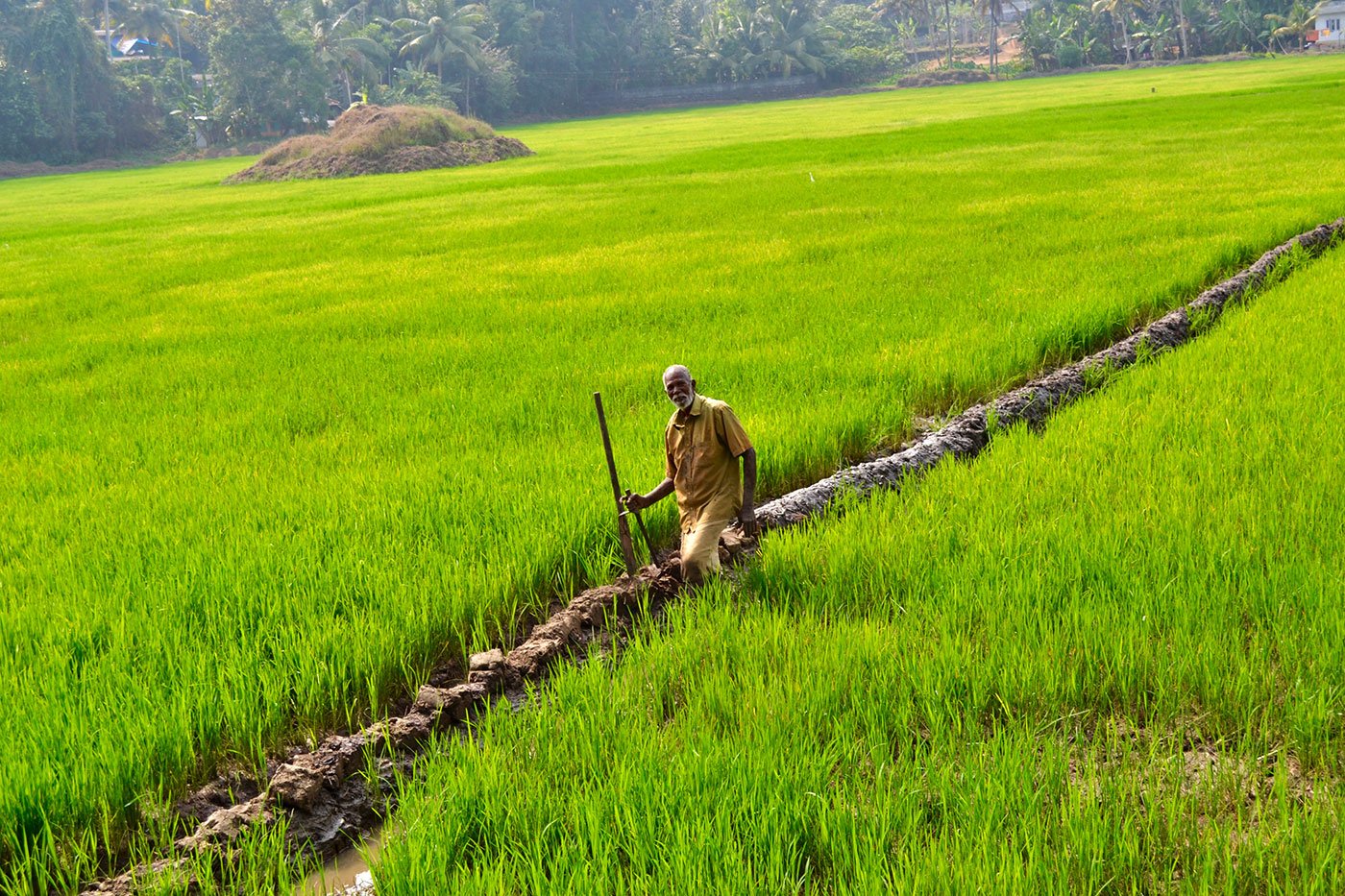 Paddy cultivation in Kerala has steadily shrunk due to many factors, including the growth of cash crops. But local governments and communities are collectively renewing the crop on land lying fallow for decades

“People laughed at us because they thought that this was too ambitious to achieve,” says  K.V Georgekutty.

It’s February and Kerala’s merciless summer is fast approaching. K.V. Georgekutty and Babu Ulahannan are resting outside their makeshift hut. A breeze blows sporadically, but the true comfort is the view ahead – 250 acres of parrot green paddy fields separated by narrow canals in the Kollad region of Panachikkadu taluk in Pallom block of Kottayam district. White birds emerge from the tall blades, black birds perch on wires across the fields.

Till a few months ago, these lush pastures were empty stretches – land lying fallow for over three decades. Babu and Georgekutty, along with Suresh Kumar, Shibu Kumar and Varghese Joseph, transformed that. “The hardest part in this process is preparing the land for cultivation. It’s gruelling work to clear the weeds, treat the soil and construct the irrigation canals around the field. Compared to regular fields, the effort to prepare fallow land is ten-fold [and requires tractors and labourers],” Babu says. He and his co-cultivators from Changanassery, a town 20 kilometres from this field, are all experienced paddy farmers. 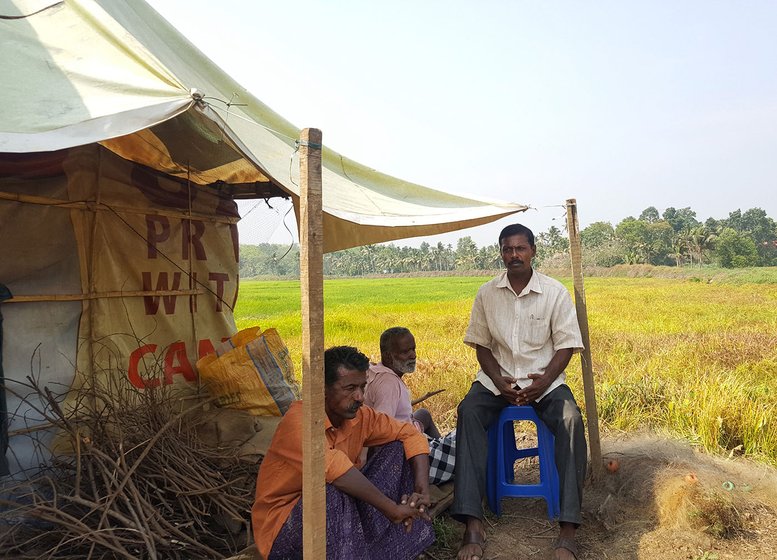 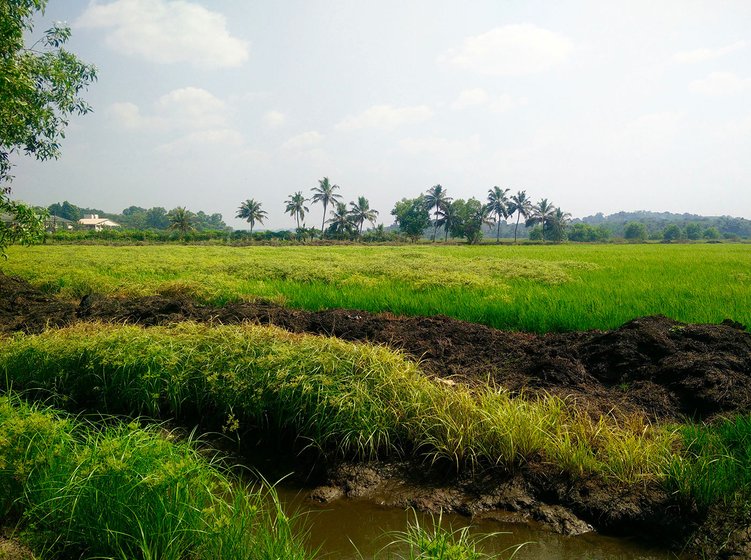 The crop’s economic viability has steadily dropped due to the growth of more profitable cash crops. Many farmlands in the state have also been turned into prime real estate plots, leaving fewer work days for farmers skilled in paddy cultivation. Cash crops now dominate the landscape – crops like rubber, pepper, coconut, cardamom, tea and coffee constituted 62 per cent of Kerala’s total cultivated area in 2015-16, according to the 2016 Economic Review .  Food crops like rice, tapioca, and pulses accounted for just 10.21 per cent of the total cultivated area in the same period.

“Cash crops compete for land in Kerala and paddy is a poor competitor. For a farmer, it is better to opt for non-paddy cultivation,” says K.P. Kannan, chairman of the Laurie Baker Centre for Habitat Studies, and former director of the Centre for Development Studies (CDS), both in Thiruvananthapuram.

'The hardest part in this process is preparing the land for cultivation. It’s gruelling work to clear the weeds, treat the soil and construct the irrigation canals around the field'

Watch video: ‘I feel so happy to see the paddy growing’

“As a result, the present production of rice is so inadequate that it cannot meet even one-fifth of the state’s requirement,” says K.K. Eswaran, a research associate at CDS. Production has declined from a peak of 13.76 lakh metric tonnes in 1972-73, notes the Economic Review ,  to 5.49 lakh metric tonnes in 2015-16.

Ten years ago, the government – after being urged by several people’s movements and activists across the state to protect wetlands and water resources – introduced the Kerala Conservation of Paddy and Wetlands Act, 2008. Under this law, reclaiming or converting paddy farms and wetlands is a non-bailable offence. In 2010, the government accelerated its efforts to create ‘fallowless panchayats’  by giving farmers incentives to cultivate on barren land.

“In the first year, the state government provides a subsidy of Rs. 30,000 per hectare, of which 25,000 is to the farmers and 5,000 is for the owner of the land as lease value,” says Georgekutty. Once the major task of readying the soil is completed in the first year, this assistance “falls to 5,800 and 1,200, respectively.”

“You need to compensate them with an amount they would otherwise get from alternative crops. Why must farmers alone take the social responsibility to care for the environment and bear the burden of cost?” adds K.P. Kannan, referring to the ecologically sustainable cultivation of paddy. 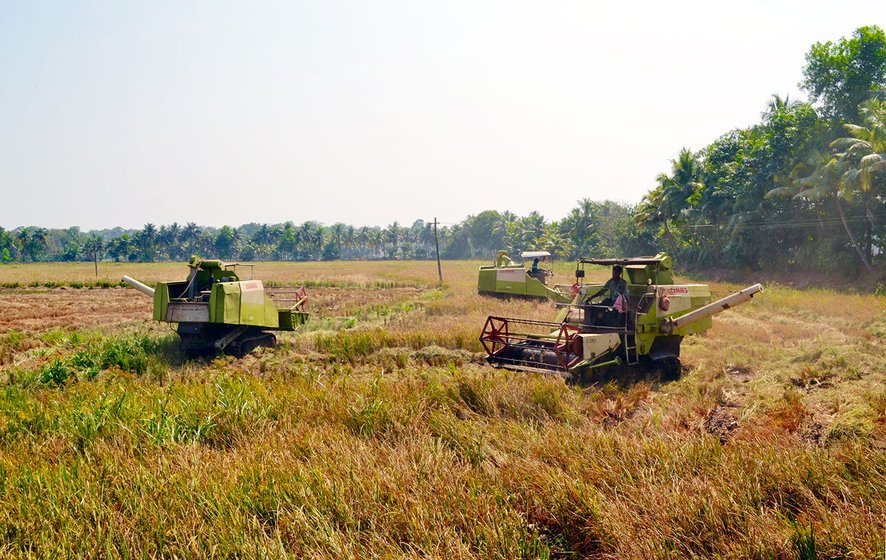 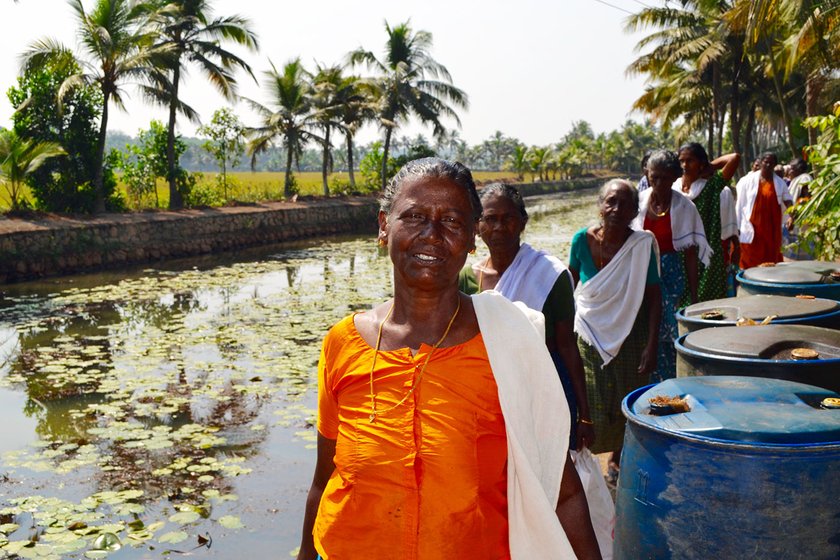 Tractors are used for harvesting on levelled ground; on the uneven and marshy parts, MGNREGA workers (right, on the paddy field in Kallara) do this hard labour

To address fears of land usurpation, this policy also encourages local panchayats to assemble farmers and owners of fallow lands, and act as a mediator to the negotiations. This is done under the supervision of the local agricultural officer.

“After the land reforms [the historic Kerala Land Reforms (Amendment) Act, 1969, which ensured the rights of the tenants] leasing is illegal in the state, but [panchayat-mediated] leasing for cultivation also has wide support,”’ says Shebin Jacob, a member of the Kollad (Panachikkadu)  panchayat, who has promoted fallow land paddy cultivation in this part of Kottayam. Local panchayat authorities go to the landowners, he says, and assure them that “you will be the owner, but they will cultivate on it.

Right now, however, the success is sporadic. “There are successful cases here and there – in Arakulam, Idukki and Kayal land [paddy land in the Kuttanad region in parts of Alappuzha and Kottayam that has UNESCO heritage status for its unique below sea level farming] because a lot of people struggled to get it done,” says Eswaran.

As they did for the field in Kollad, which speaks of the combined efforts of local governments, communities, agricultural officers and farmers.  Across the district, in 2017-18, roughly 830 hectares of  fallow land is  now covered by paddy, including the 250-acres in Kollad, states the progress report for March of the agricultural office in Kottayam. 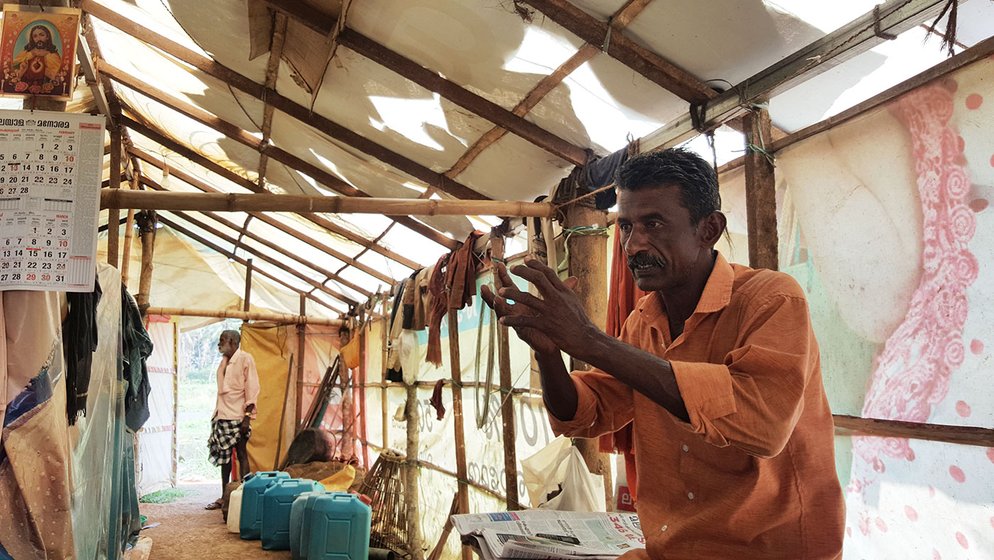 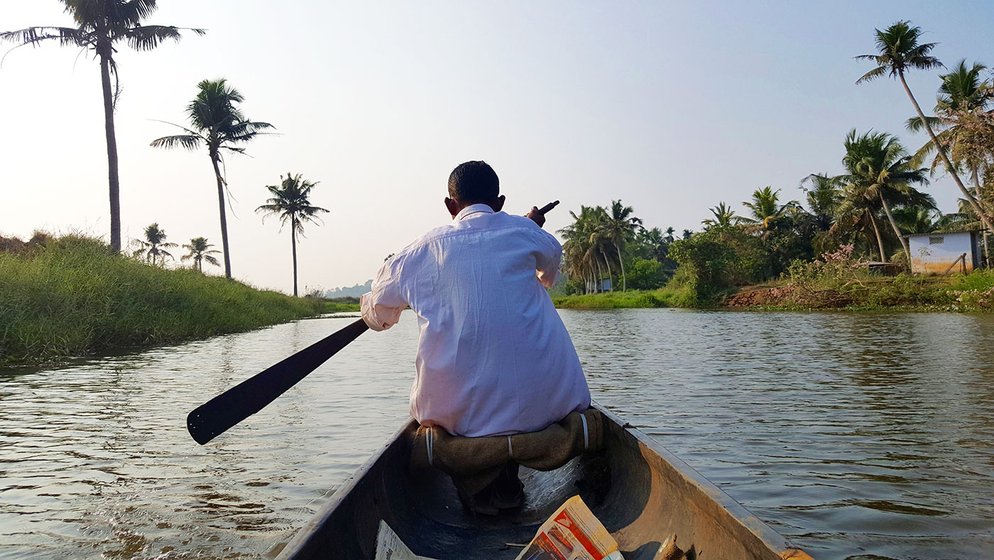 Babu Ulahannan (left) speaks of the massive work required to cultivate paddy on 250 acres of fallow land land. He traverses the field in a canoe across a stream

“We started to sow in November [2017] and after 120 days of hard work, we are here today,” says Babu as he rows the vallam (canoe) that is taking us around the fields. “If everything goes well, we estimate an output of 22 quintals of rice [per acre] and a profit of 25,000 per acre.”

Once he and his co-farmers from Changanassery got the administrative clearance to cultivate, they brought with them a known team of labourers. The state effort to promote fallow land cultivation does not address a huge agricultural problem in Kerala – a shortage of labourers.

“Labour is a big problem,” says Jose George, a farmer in Kalathukadavu village, in Meenachil taluk of Kottayam, who is co-cultivating 10 acres of paddy. Local workers are paid a daily wage of Rs. 850 (this rate varies across the district, based on negotiations); migrant workers, mostly from Bihar and West Bengal, get Rs .650. “Then there is the additional issue of local workers resisting the hiring of migrant workers,” he says.

To meet the demand for labour, the panchayat often employs MGNREGA workers from within Kerala for fallow land cultivation, at a daily wage of Rs. 260. "The [MGNREGA] workers are of great help to farmers in the initial stages of land preparation. They also create micro-irrigation canals around the fields. This considerably reduces the cost of cultivation ," says Rasia A. Salam, agricultural officer, Kottayam. “Earlier, the panchayat was unable to offer even 30 days of work, but now they get 50 to 60 days of work due to this new programme." 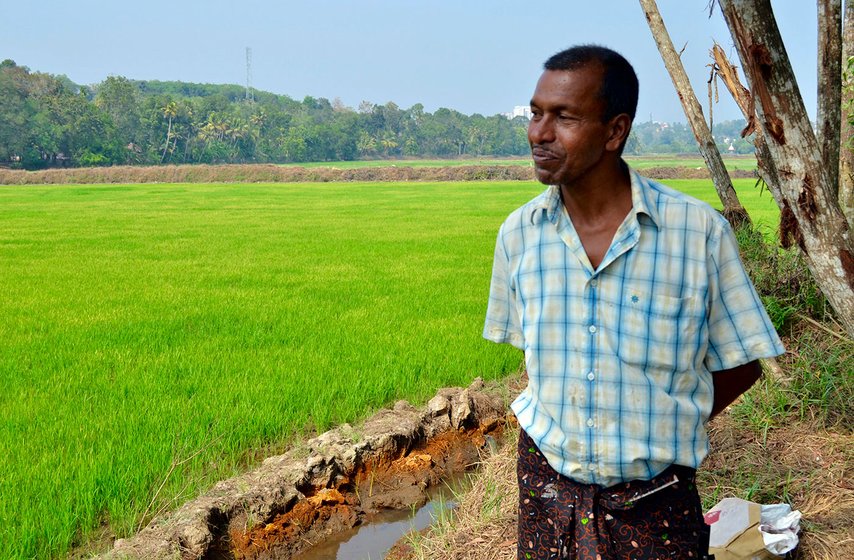 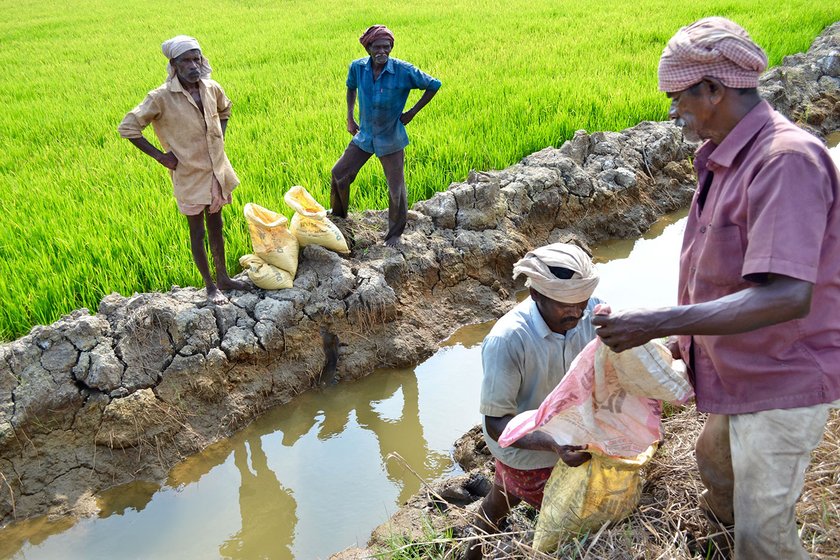 Jose George (left) at the 10-acre paddy field he is co-cultivating in Kalathukadavu village in Kottayam district. Purushottaman (right, who only gave his first name), a 75-year-old skilled farmer in Alappuzha district, also works as an agricultural labourer on Jose’s farm

Well before the government’s policies to promote paddy, the Kudumbashree collective too has done a lot to increase the crop’s cultivation. Started in 1998, this is now a network of 4.3 million women (says the collective’s website). Most of them live below the poverty line, and many are agricultural labourers with the skills to sow and harvest paddy. Kudumbashree helped them group together and approach farmers or landowners. The women work on the land themselves and get a cultivation incentive from  Kudumbashree of Rs. 9,000 per hectare. The collective now cultivates paddy on 8,300 hectares across Kerala, mainly in the central regions of Malappuram, Thrissur, Alappuzha and Kottayam districts. They process and sell this paddy, branded under the name of their regions, and have tie-ups with some retail outlets. “This adds to their income," says Rahul Krishnan, advisor on farm livelihoods, Kudumbashree.

Meanwhile, in Kallara village in  Vaikom block of  Kottayam , at a harvest festival on February 16, a group of  around 40 farmers and their families, along with agricultural officers, panchayat members and the media, have assembled to celebrate the collective transformation of 100 acres of fallow land to golden rice fields. The atmosphere is jubilant as drums beat and farmers are honoured with sashes and gifts.

Sreedharan Ambattumukil, one of the 40 farmers, happily holds the first bundle of cropped paddy; his months of hard work have produced a healthy harvest. But, like other farmers in Kallara, he is concerned about the procurement of this harvest. “They [private contractors who collect the grain for the state government) will take 100 kilos and not pay for 17 kilos. Last year though they cut just 4 kilos.” The contractors do this with all crops, not only fallow land paddy, and this is a point of conflict for many farmers.

In some places, disagreements between farmers and the agents of mill owners over the quality of the produce have also caused long delays from the time of the harvest to its procurement. “This is very disadvantageous to the farmers,” says Eswaran.

Given the multiple uncertainties, what keeps the farmer going? “Farming for us is a passion. We will do it even if we run into losses,” says Sreedharan. “The farmer will never be prosperous in this country, but neither can we be destroyed.”

Noel Benno is a former William J. Clinton fellow at the American India Foundation, and at present a student of Public Policy at the National Law School of India University, Bengaluru.

Other stories by Noel Benno