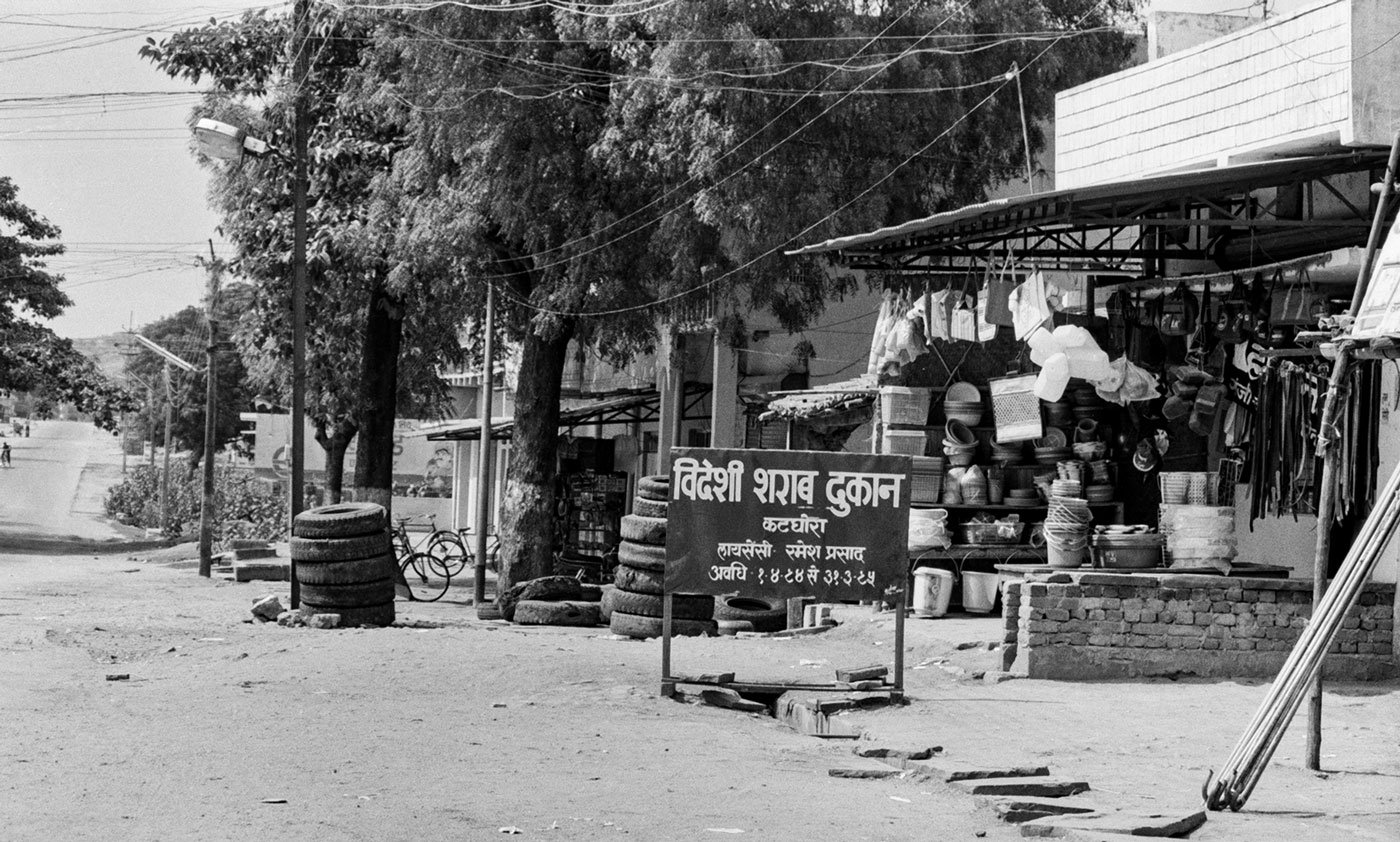 He wasn’t the owner of the shop he said, just a friend of his. A little later, he promoted himself to “a relative of the owner.” And moments after that, he was “a relative who worked in the shop.” It’s possible that if we’d persisted with that line of questioning, he might have declared himself owner.

He declined to be photographed. And would rather not have us shoot inside the shop. He was happy to have us snap the signboard outside it, though.

Videshi sharab dukan , read the board – a little away from the entrance. (Foreign liquor store, that is). Licensee: Ramesh Prasad.  This was on the edge of Katghora town in Surguja district, now in Chhattisgarh (but then in Madhya Pradesh). Our slightly tipsy interlocutor was certainly not Ramesh Prasad. We were beginning to believe that his only connection here was by way of being a big customer at this foreign liquor store.

Foreign liquor? Well, not quite. I cannot remember when I last heard the acronym IMFL. It stands for Indian Made Foreign Liquor. Back in 1994, when this picture was shot, there was a raging debate over IMFL versus desi liquor.

The IMFL genre, as I learned from the Law Insider website, “means liquor produced, manufactured or compounded in India after the manner of gin, brandy, whisky or rum imported from foreign countries and includes milk punch and other liquors consisting of or containing any such spirits, but does not include beer, wine and foreign liquor.” Note it excludes “beer, wine and foreign liquor .” 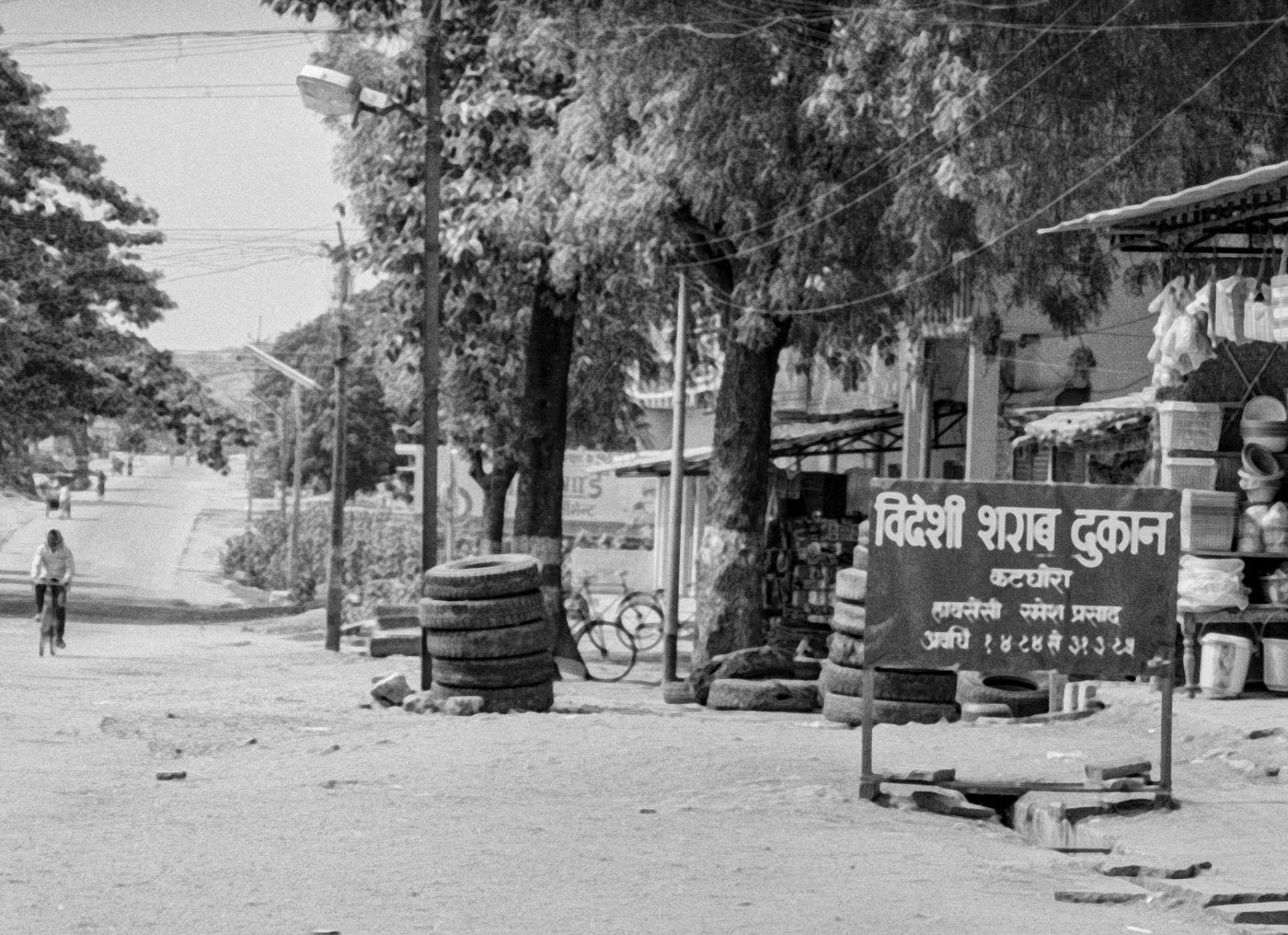 Anger among desi liquor makers back in the day was justified.Toddy, arrack, other desi stuff were periodically banned in one state or another. But IMFL was celebrated. As we stood looking at the videshi sharab dukan , I remembered what I’d seen in 1993 in Pudukkottai, Tamil Nadu – 1,700 kilometres away. There, the anti-arrack authorities I’d gone to meet were busy auctioning ‘brandy shops,’ as IMFL outlets were called in south Tamil Nadu. Arrack was a pain as it affected excise revenues from the sale of legal alcohol.

At one public meeting, officials promoting prohibition were embarrassed by a DMK activist who presented a leading revenue official with Rs. 5. This, he said, was “a tribute to your fight against the evils of drinking while promoting brandy shops.”

Back in Katghora, 1994, we realised we were getting late, and shook off our slightly sozzled, self-appointed guide who was now holding forth on the virtue of being open to foreign influences. We never got to meet v ideshi sharab dukan licensee Ramesh Prasad. We had to hit the desi highway to get to Ambikapur in under three hours.

And what the heck is the ‘proof’ in proof litres? It apparently originated centuries ago in England as a test done to check the amount or level of alcohol in the liquor. Experts say this sort of ‘proof’ as a measure of alcohol content is now mostly historical. Ah, well, Madhya Pradesh – as minister Devda might well argue – is still making history. In the same decade that Indian Made Foreign Liquor climbed 23 per cent, country liquor rose a piffling 8.2 per cent – though its total consumption figure was still over twice that of IMFL . So desi remains greater, but videshi has seen more than twice its rate of growth. Just the sort of paradox that will confound self-respecting patriots.