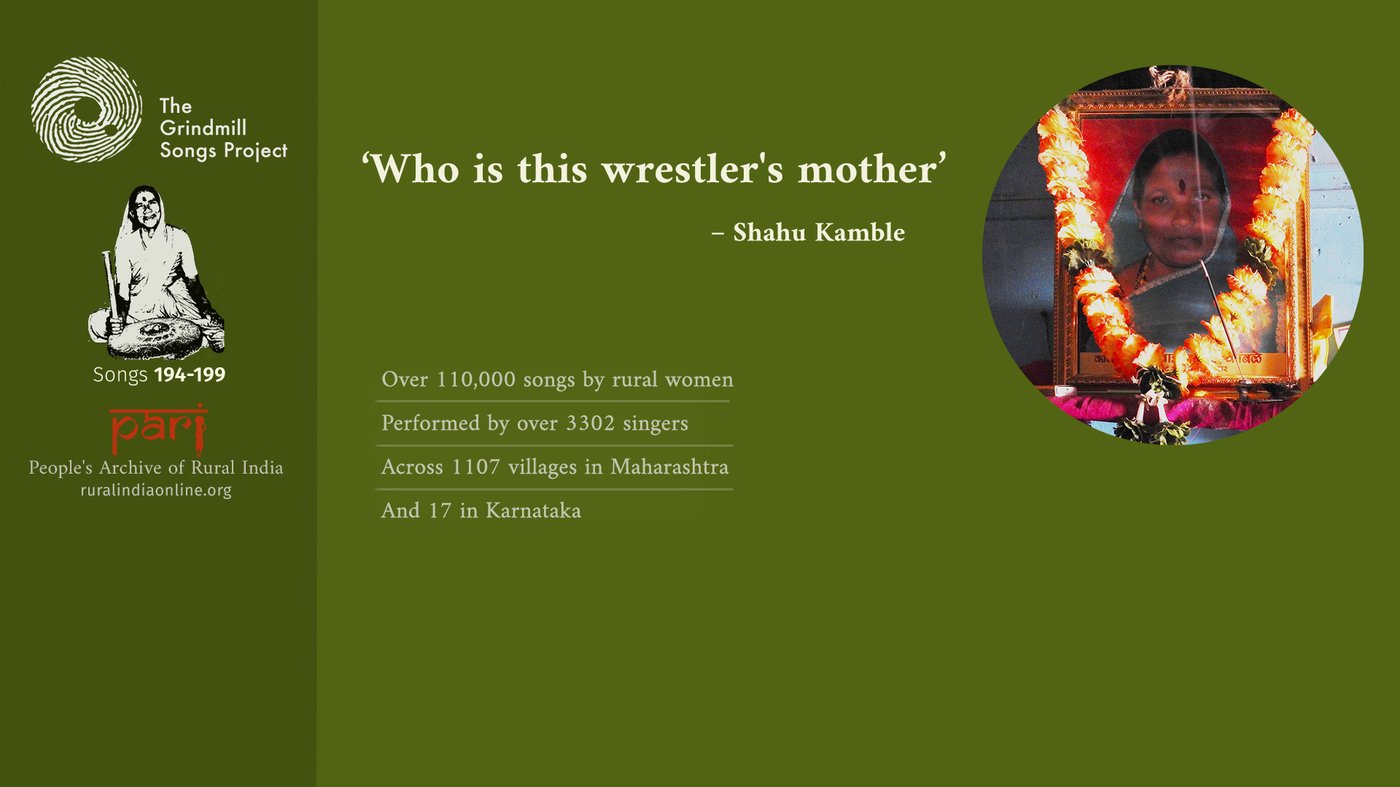 Should we credit the strength, skills and physique of wrestlers to their mothers? Yes, suggests Shahubai Kamble of Nandgaon village in Pune district, in her ovi in this instalment of the Grindmill Songs Project, singing about a wrestling match between a maternal uncle and his nephew

A young lad wrestles with a much older man. The boy wins and the older man accepts defeat. The man is the boy’s considerate maternal uncle. This is the opening ovi in a set of six sung by Shahubai Kamble of Nandgaon village in Pune district.

In the second couplet, we learn that the wrestling match is held in an open space. The boy’s mother, protective of her son, says to her brother, “Take care of your sister’s son.” In the third ovi , the match takes place in the difficult terrain of the Sahyadri hills. Friends in the audience tell each other that this doesn’t matter because both the uncle and his nephew are “master wrestlers, sons of a mother and her daughter.”

In the fourth couplet, ​ halgi (frame drums) in the audience go “tang! tang!” to cheer the wrestlers on, and friends ask each other, “Who is this wrestler’s mother?” It is interesting to note that there is no mention of the wrestlers’ fathers in these songs. The credit for the strength, skill and physique of these men is given to their mothers, who gave them birth, who nurtured them.

In the last ovi , Shahubai asks about the man singing in the fields at the edge of the village. It is her brother, she tells us, teaching her son (his nephew) to sing. 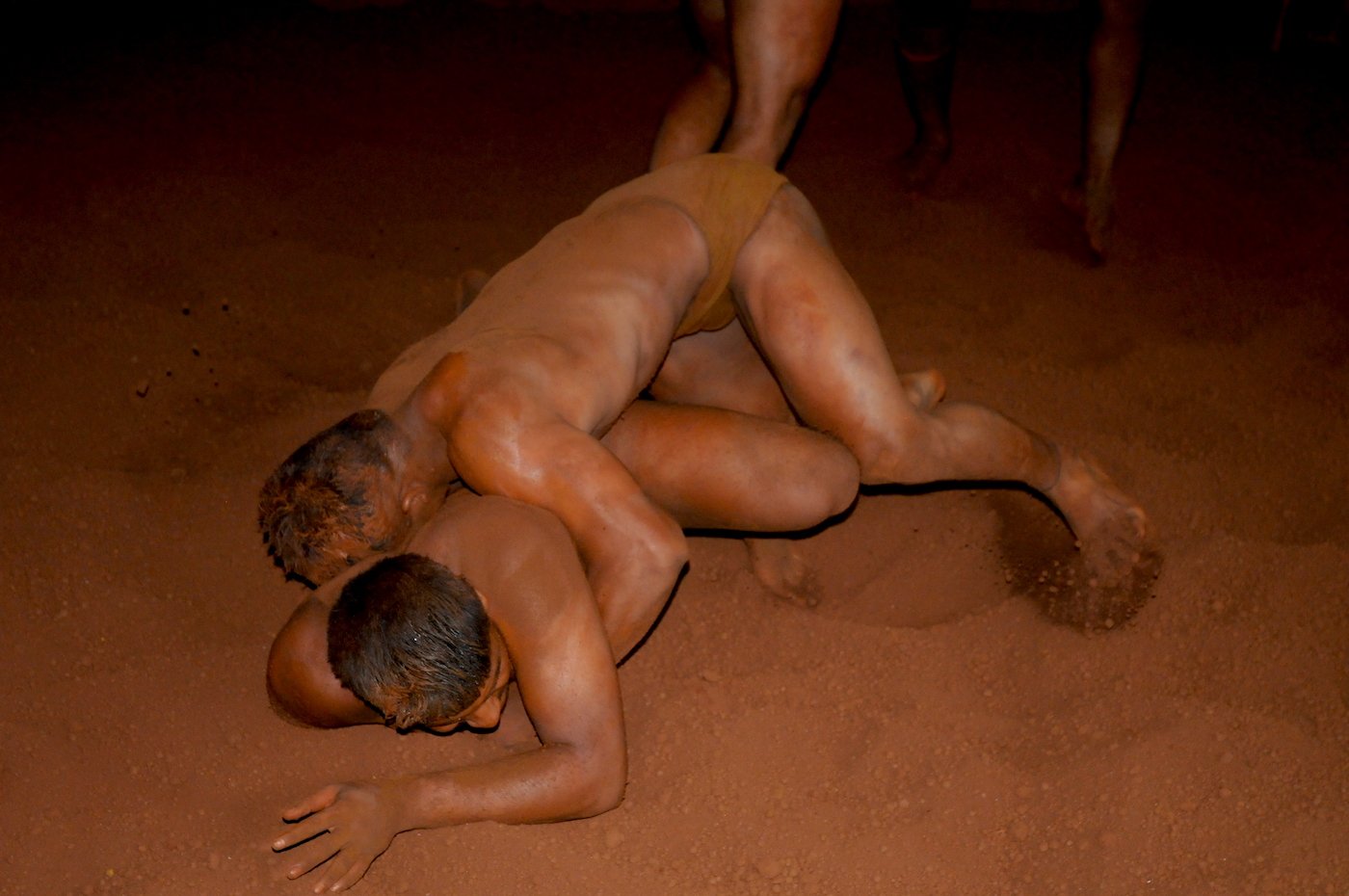 ‘These are master wrestlers, sons of a mother and her daughter,’ sings Shahubai about a match between an uncle and his nephew

At the end of the songs in the audio clip below, we hear the voice of Hema Rairkar explaining an ovi to Guy Poitevin. The two activists and scholars conceived the grindmill songs database, which they began working on in the 1980s. Rairkar and Poitevin interacted with rural women in Maharashtra, seeking to to empower them in their fight against oppression. When the women said they could best express themselves through the songs they sang at the grindmill, the activists decided to collect these songs. They travelled to rural Maharashtra and some parts of Karnataka, and wrote down over 110,000 songs.

Shahubai Kamble contributed 401 songs to the database, of which 170 were recorded on audiotapes in October 1999. They are a part of the Grindmill Songs Project now hosted on PARI. As part of this project, a small team has been visiting one or two villages every month to talk to the singers, and take photographs of and record videos with them.

Unfortunately, Shahubai passed away in August 2016. She is survived by her husband Namdev, her two sons, their wives and children, who live in Nandgaon village in Mulshi taluka of Pune district. Her melodies and poignant singing though have been captured forever. Let’s listen to them.

A wrestling match is organised between a maternal uncle and his nephew
O woman, the nephew is of a tender age; the uncle accepts defeat

The wrestling match takes place on open land
I tell you, brother, take care of your sister’s son

The uncle and nephew are wrestling on difficult hilly terrain
Friends tell each other, ‘These are master wrestlers, sons of a mother and her daughter’

O woman, halgi [frame drums] sound ‘tang! tang!’ in the wrestling arena
Friends ask each other, ‘Tell me, whose son is he? Who is this wrestler's mother?’

A wrestling match is on between uncle and nephew in front of people
The nephew is of tender age; the uncle smiles to himself

Who is this man singing in the fields at the edge of the village?
It is my brother teaching my son [his nephew] to sing