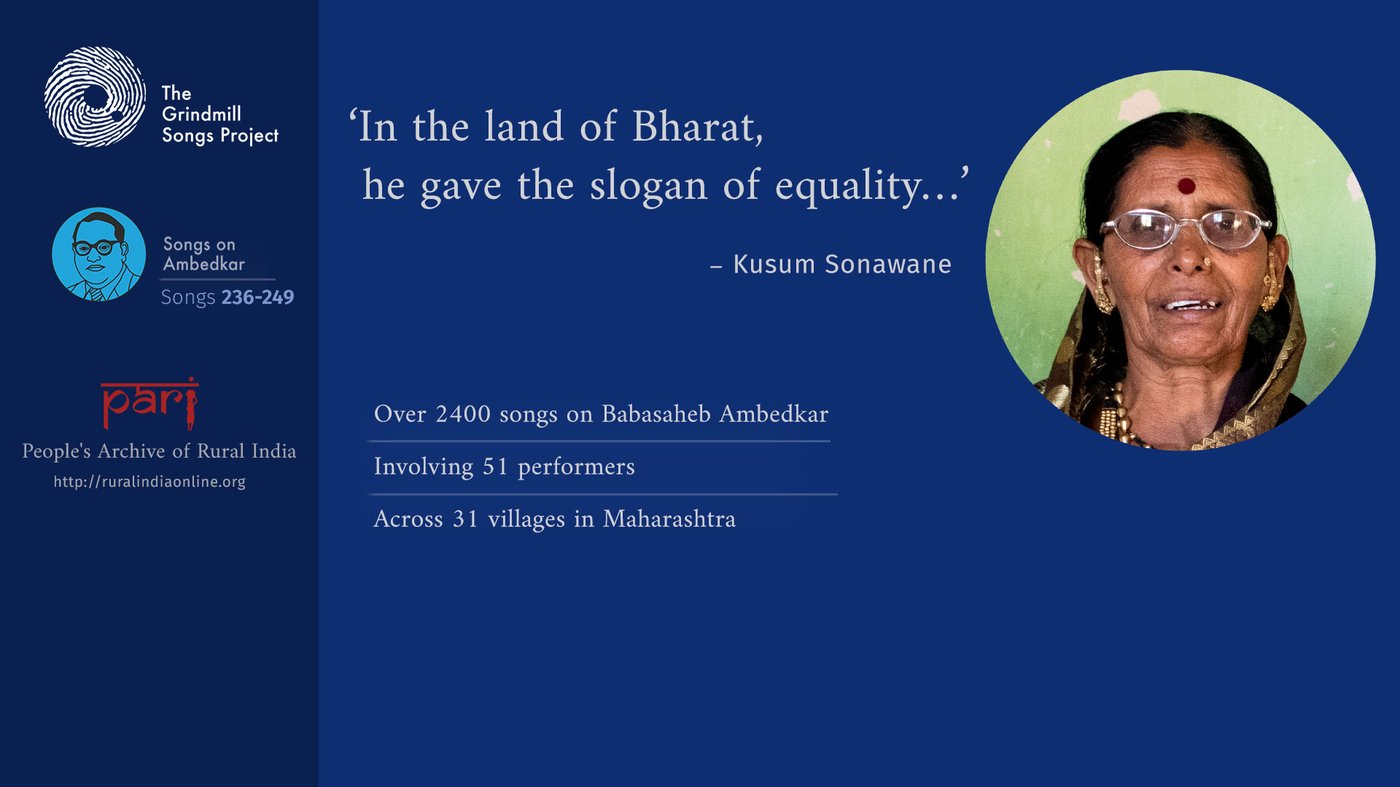 In this instalment of the Grindmill Songs Project, Kusum Sonawane and others from Mulshi taluka sing 14 ovi remembering Babasaheb Ambedkar’s struggles for equality and his efforts to dismantle the caste system

Bhimai’s son [Babasaheb Ambedkar] achieved a noble feat
From the capital Delhi, he established equality in the land

We reach Kusum Sonawane’s home in Nandgaon village of Pune district at 9 a.m. on March 25, 2018. “We’re not yet ready,” she tells us. “There’s water to be filled and the children’s morning meal to be cooked.” We say we will wait till she and the other singers are ready. We’re here to record their jatyavarchi ovi (grindmill songs).

While doing her chores, Kusumtai also points to the awards on the walls of the front room. She had received these for her work with the Garib Dongri Sanghatana, an organisation working with the rural poor in the hilly tracts of Pune district. There are also images of Jyotiba and Savitribai Phule, and a huge poster of Dr. Babasaheb Ambedkar on the walls. But what stands out is the preamble to the Constitution in Marathi – stuck with cellotape, almost near the roof.

It contains an idea – ‘Darjyachi ani sandhichi samaanta’ (‘Equality of status and opportunity’) – which is reinforced by the ovi that Kusumtai and her friends sing for us that day. They narrate Babasaheb’s many achievements – and sing of them with pride.

One of these achievments was the satyagraha that Ambedkar led on March 2, 1930 to the Kalaram temple in Nashik, demanding entry for ‘untouchables’. It would last for a month, but the temple was not opened up to Dalits.  Babasaheb continued to fight for this right till 1934 and eventually moved away from this demand because he felt that only a complete dismantling of the caste system would truly emancipate Hindu society and bring equality to all. 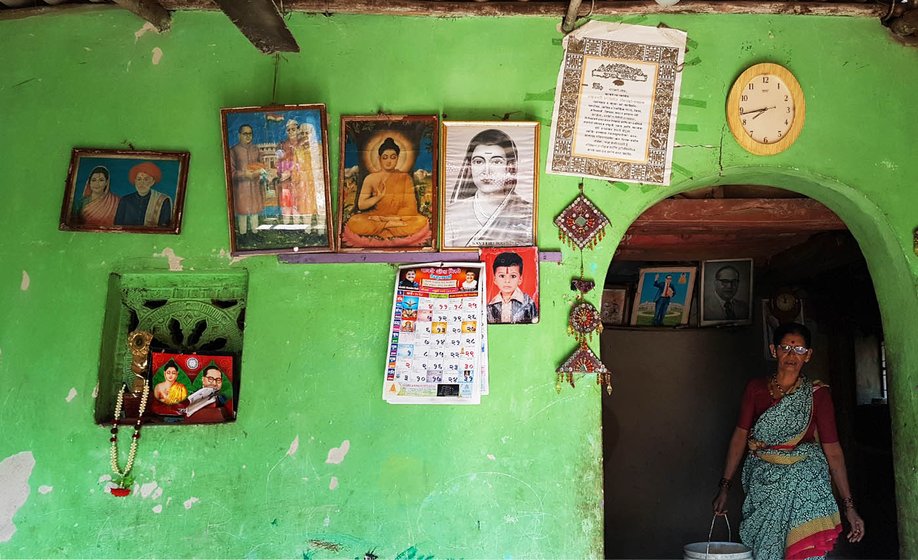 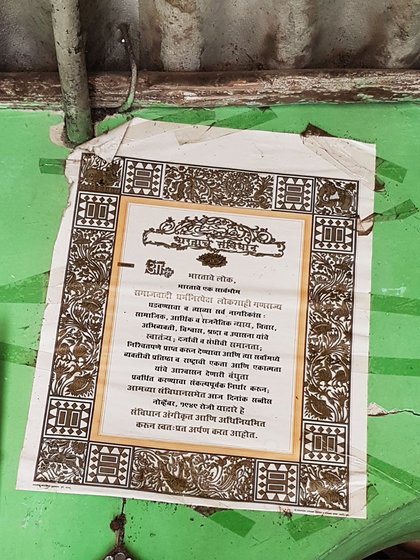 Kusumtai's home is filled with images of Ambedkar, Lord Buddha, and Savitribai and Jyotiba Phlule. A  print of the preamble to the Constitution adorns a wall

In this undelivered speech (published later as an essay), he also said that the restrictions on the movement of  ‘untouchables’ and the modest clothes and jewellery some Dalits were forced to wear even when they could afford more expensive items. Dalits were also forced to take permission from the upper castes for the kind of food they ate, and Babasaheb mentions one such case from Chakwara village in (the then) Jaipur State:

In April 1936, a man returned from a pilgrimage and invited his fellow ‘untouchables’ for dinner. Among the dishes served was ghee, which incensed the upper caste villagers so much that they attacked the guests with lathi s , destroying the dinner and forcing people to flee. An ‘untouchable’ serving and consuming ghee was seen as arrogance and an insult to the upper castes.

That’s the first of the 14 ovi presented here, in audio and video.

After fighting for their rights for years, the women say that Dalits were helpless, at their wits’ end. But Bhimraya brought them reservations, which ensured that they could get an education or a job. Reservations gave them confidence and women, too, started speaking in public. It was all because of a diamond, they say – Ramji’s son, Babasaheb Ambedkar.

In many of these couplets, Babasaheb is referred to as the son of Ramji (his father) and of Bhimai (his mother). Ramji’s son, the singers say in the fourth ovi , went to vilayat (a foreign country) for his higher studies, referring to the fact that Dr. Ambedkar earned a doctorate from Columbia University and later enrolled in the London School of Economics. In the fifth ovi , one singer tells her friend that Bhimai’s son did “a great deed at the Round Table Conference,” referring to the fact that he represented the ‘Depressed Classes’ at these conferences between 1930 and 1932.

Thus “he made a name for himself in the capital, Delhi,” says the fifth ovi. For Dalits, all of these achievements are a great source of pride, which is reflected in couplets four to ten. Babasaheb’s “noble feat [was that] he established equality in the land,” say the singers.

In the eighth ovi we learn that, in 1927, Bhimraya fought hard, “moved heaven and earth,” so Dalits could enter the Kalaram temple in Nashik. Brahmins had prohibited Dalits from entering temples, but Bhimraya, the singers say, held a satyagraha to fight for their rights to the behold the deity within. (The ovi mistakenly says that the satyagraha took place in 1927; it was held in 1930.)

Ovi s 11 to 13 are a commentary on the caste system. The singers say that the family a person is born into is not his or her fault. Sadly, we have been separated by the rigid divisions of caste. In the concluding ovi , the singers remember what Bhimraya had said to his followers – the deity in the Kalaram temple was made of stone – implying that the Hindu caste system was heartless and rigid like stone.

Listen to the 14 ovi in this audio clip:

For our rights, we were at our wits’ end, we were helpless
We got reservations, and women gave speeches in public

We didn’t have any rights when there were no reservations,
But a diamond was born, he is Ramji’s son [Babasaheb Ambedkar]

O woman, Bhimai’s [Bhim’s mother’s] son did a great deed
At the Round Table Conference; [and] he made a name for himself in the capital, Delhi

Bhimai’s son achieved a noble feat
From the capital Delhi, he established equality in the land

Ramji’s son had one unique achievement
In the land of Bharat, he gave the slogan of equality

The Kalaram temple deity [and the caste system] is made of stone
O woman, Bhimraya said in his address to the Dalits

*Notes: The singer mistakenly says the satyagraha took place at Kalaram temple in 1927 – it happened in 1930. **When Babasaheb Ambedkar led the march to the temple in Nashik,  the doors were shut by the priests to prevent ‘untouchables’ from entering. The struggle went on for a month. The actual entry was allowed only some years later. 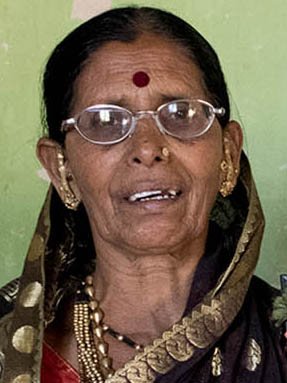 Date: This documentation (songs, photographs and video) was done on March 25, 2018