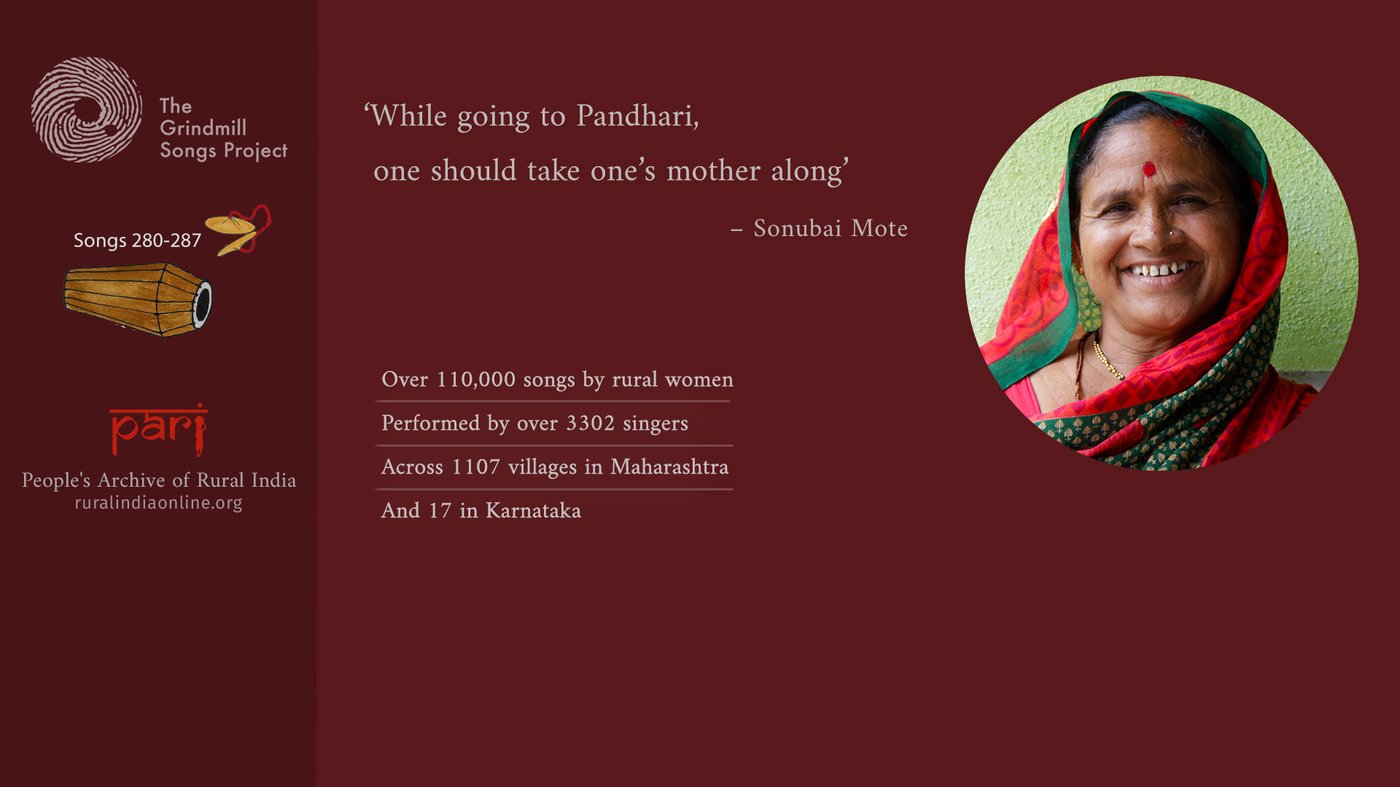 He wants her to sing a famous old ditty about a peacock dancing in a mango orchard, written for the Marathi film Devbappa (1953) by poet and lyricist G.D. Madgulkar. It’s still popular among school kids, but we’re hoping Sonubai will sing some jatyavarchi ovi or grindmill songs for us. These mostly anonymous creations have been sung by rural women in Maharashtra while grinding grain into flour at the mill in their homes for generations.

On a pleasant October morning in 2017, we meet Sonubai and her family at their home in Savindane village of Shirur taluka in Pune district. Sonubai was first recorded singing grindmill songs in December 1995, when she sang 23 ovi for the original GSP team led by the late Hema Rairkar and Guy Poitevin. (This team had collected recordings of over 110,000 songs in the 1990s; since 2017, the PARI GSP team has travelled to various villages in Maharashtra to meet the singers, photograph them and record their songs on video.) More than two decades after that first recording, Sonubai sang eight ovi for our camera in a powerful voice. 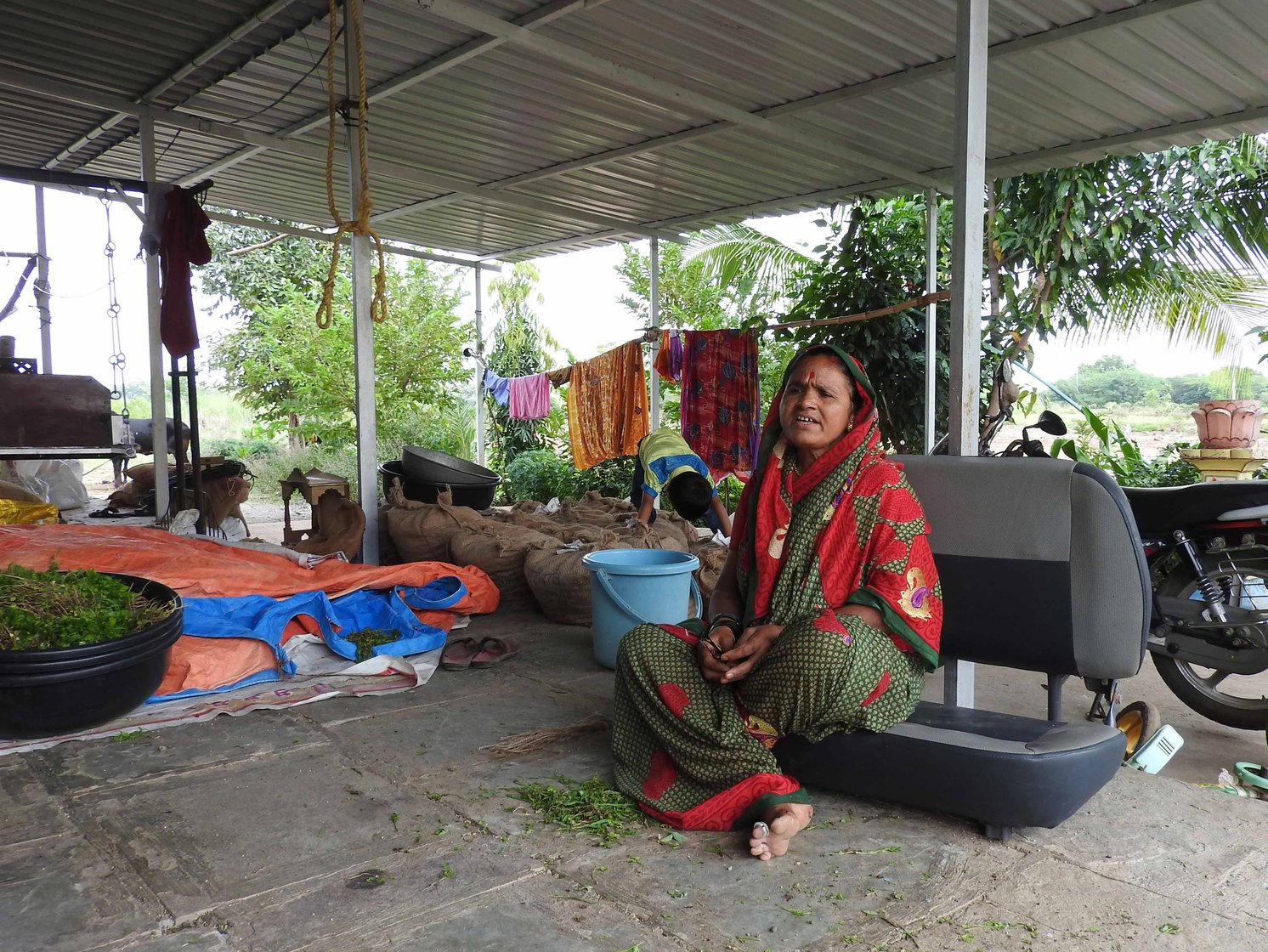 More than two decades after that first recording, Sonubai sang eight ovi for our camera in a powerful voice

Sonubai and her husband Dnyaneshwar work on their farm, and she also handles the housework. The six-acre farm is owned jointly by Dnyaneshwar and his siblings, and together they grow sugarcane, potatoes and millets. Sonubai and Dnyaneshwar, both in their 50s, have three children. Their older son (Kaustubh’s father Jayakumar, who lives with them) studied till Class 12 and runs a restaurant in the village. Their daughter is married and lives in Pune, and their younger son, a graduate, works as a journalist with a Marathi news channel.

In the courtyard of their home, aluminium rods hold up an open storage space with a tin roof –  newly harvested bajra (pearl millet) is stacked in a huge pile here under plastic sheets. Sacks of potatoes, sealed and labelled, stand in neat rows. Bunches of coriander leaves, freshly picked from the farm, fill up a plastic basin. A cow and a calf are tied to a stump in the ground and in another corner are a motorbike, a scooty and a kid’s bicycle. Near the shed are pink rose plants and fruit-laden lemon and guava trees.

Sonubai, who speaks very little, says, “I sing bhajans [devotional songs] at the village temple and at religious functions.” For us, she sings ovi about the Pandharpur wari or pilgrimage for Lord Vitthal. And not to be left out, Kaustubh sings the Nach re mora song before we leave. 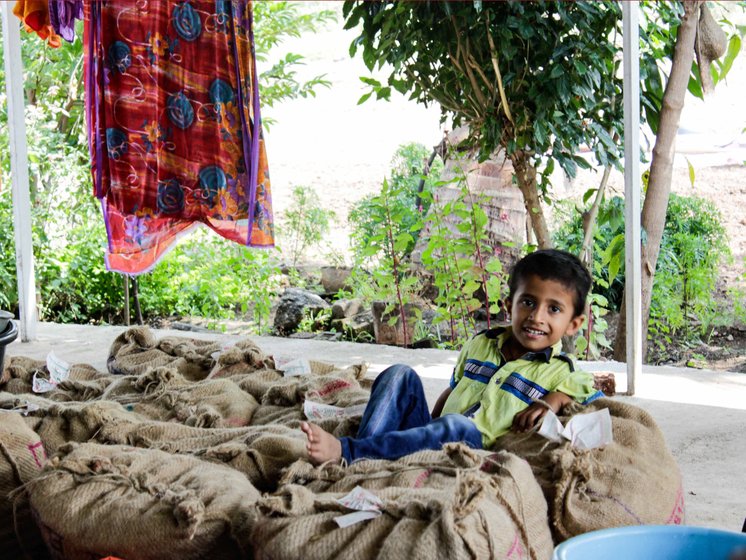 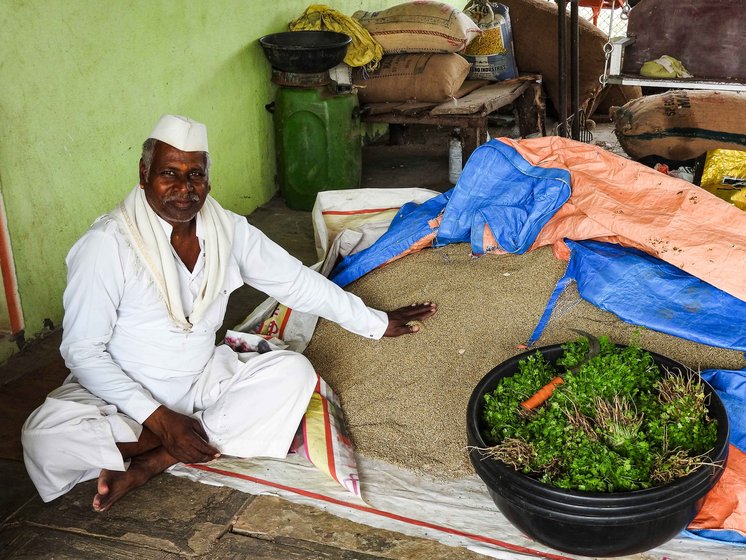 Left: Sonubai's grandson Kaustubh has a special song request. Right: She and her husband Dnyaneshwar work on their farm

Devotion to Lord Vitthal draws people from rural Maharashtra and other states to the temple in Pandharpur in Solapur district. This pilgrimage or wari was first undertaken around 800 years ago. Bhakti poets Dnyaneshwar and Namdev in the 13th century and Tukaram in the 17th century, as well as many others, went on this journey.

Each year, tens of thousands of women and men – most of them farmers, shepherds, cowherds – go on the Pandharpur wari . It’s a 21-day journey on foot taken twice in the Hindu lunar calendar year – in June-July during the month of Ashadh and in October-November during the month of Kartik. The more popular journey in June-July begins after the sowing of crops. If the rains are delayed, many farmers have to stay behind on their fields and forgo the wari . Those who go include in their prayers a good monsoon and a rich harvest. This year, the journey began on June 24 and will end in Pandharpur on July 12, with the ritual fast of Ashadhi Ekadashi.

These couplets speak of how important it is for a devotee to go to Pandharpur with family. If going alone, perhaps the love of family members will accompany him/her

A family goes to Pandharpur

Sonubai’s first two ovi for Ganpati or Lord Ganesh say that goddess Sharada (another name for goddess Saraswati) is present in his court. The six ovi that follow are about going to Pandhari or Pandharpur on a pilgrimage and taking along the entire family. Each of these ovi is for a different member of the family – mother, father, brother, sister, maternal uncle and maternal aunt. The ovi also mention that a copper kalshi or pot of water should be carried on the journey to offer water to the gods and to the jasmine, champak, tulsi and rui and other plants.

Each of these ovi has a rhyme scheme; for example, aai or mother rhymes with jai or jasmine in the third couplet. The act of watering the plants has a symbolic significance – the fragrant jasmine and champak flowers and the leaves of rui are used to make garlands for deities. And tulsi is also revered by some as the ‘selfless and devoted’ wife of Lord Vitthal.

These simple rhyming couplets speak of how important it is for a devotee of Lord Vitthal to go to Pandharpur with family. If the devotee is going alone, perhaps the love of family members will accompany him/her on the journey.

In the audio clip recorded by the original GSP team (below), Sonubai started to sing these ovi in the same fast tune that she sings them for us too. In the former though, the late Hema Rairkar said to Sonubai, “ Galaa badlaycha [Change the tune].” And so, Sonubai renders the songs in a soft and slow melody.

While going to Pandhari, one should take one’s mother along
And water the jasmine from the copper pot

While going to Pandhari, one should take one’s father along
And water the chafa * from the copper pot

While going to Pandhari, one should take one’s maternal aunt along
And water the tulsi from the copper pot

While going to Pandhari, one should take one’s sister along
And water the rohini * from the copper pot

While going to Pandhari, one should take one’s brother along
And pour water for God from the copper pot

While going to Pandhari, one should take one’s maternal uncle along
And pour water for Lord Ram from the copper pot

Note: Chafa refers to the champak or magnolia tree (Magnolia champaca) and rohini or rui is the crown plant (Calotropis gigantea). 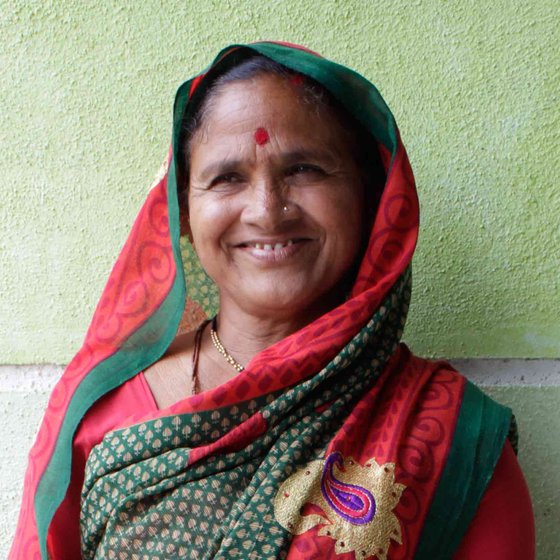