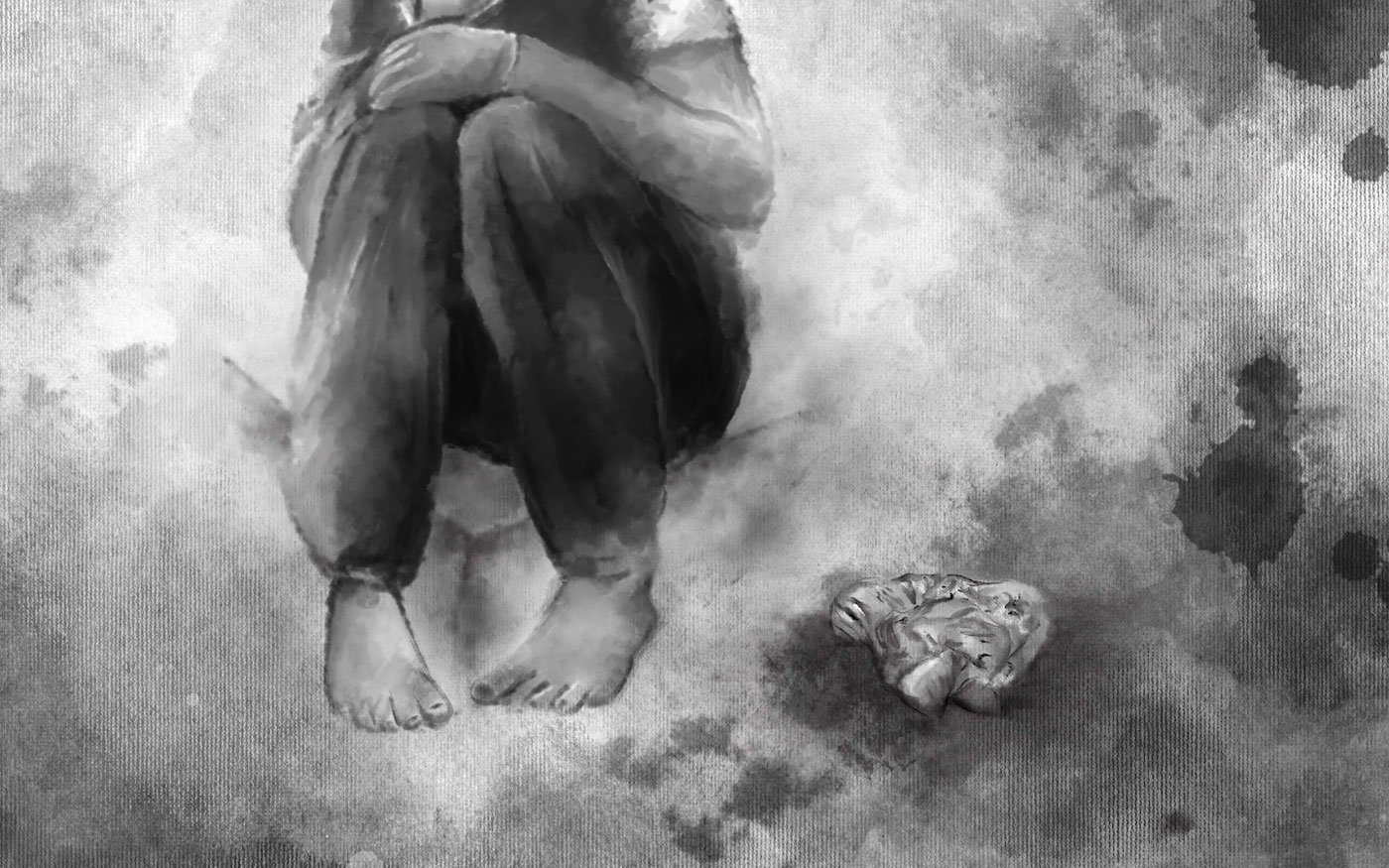 With schools shut, girls from poor families in Uttar Pradesh’s Chitrakoot district have lost access to free sanitary napkins and are turning to risky options. In UP alone, the numbers of such girls runs to millions

Phoolwatiya waits for her turn while her younger brother, 12-year-old Shankar Lal, takes his last joyride of the day on their bicycle – right up to a nearby neem tree. “I will go for a short ride today myself and come back quickly,” says the 16-year-old. “For five days from tomorrow, I won’t be able to cycle anyway. It becomes risky while using cloth,” she observes, while petting a puppy on the roadside.

Phoolwatiya (name changed) expects her menstrual cycle to begin from tomorrow. But this time – unlike in earlier months – she won’t be getting free sanitary napkins from her school. “We normally get pads there when our periods begin. But now I will use any piece of cloth I can.”

Her school in Chitrakoot district of Uttar Pradesh, like all others in the country, is closed due to the Covid-19 lockdown.

Phoolwatiya lives in Sonepur, a hamlet in Tarouha village in Karwi tehsil , with her parents and two brothers. She also has two sisters who are married and live elsewhere. She had given her Class 10 examinations and was about to re-join school after a 10-day break when the lockdown was announced on March 24. She is a student of the Rajkiya Balika Inter College in Karwi block.

“I will look for a piece of cloth not being used for anything else – and use that. I’ll wash it before using it a second time,” says Phoolwatiya. An outline of dust – probably from walking barefoot – sits on the shining fuchsia nail paint decorating the toes of her dusky feet. 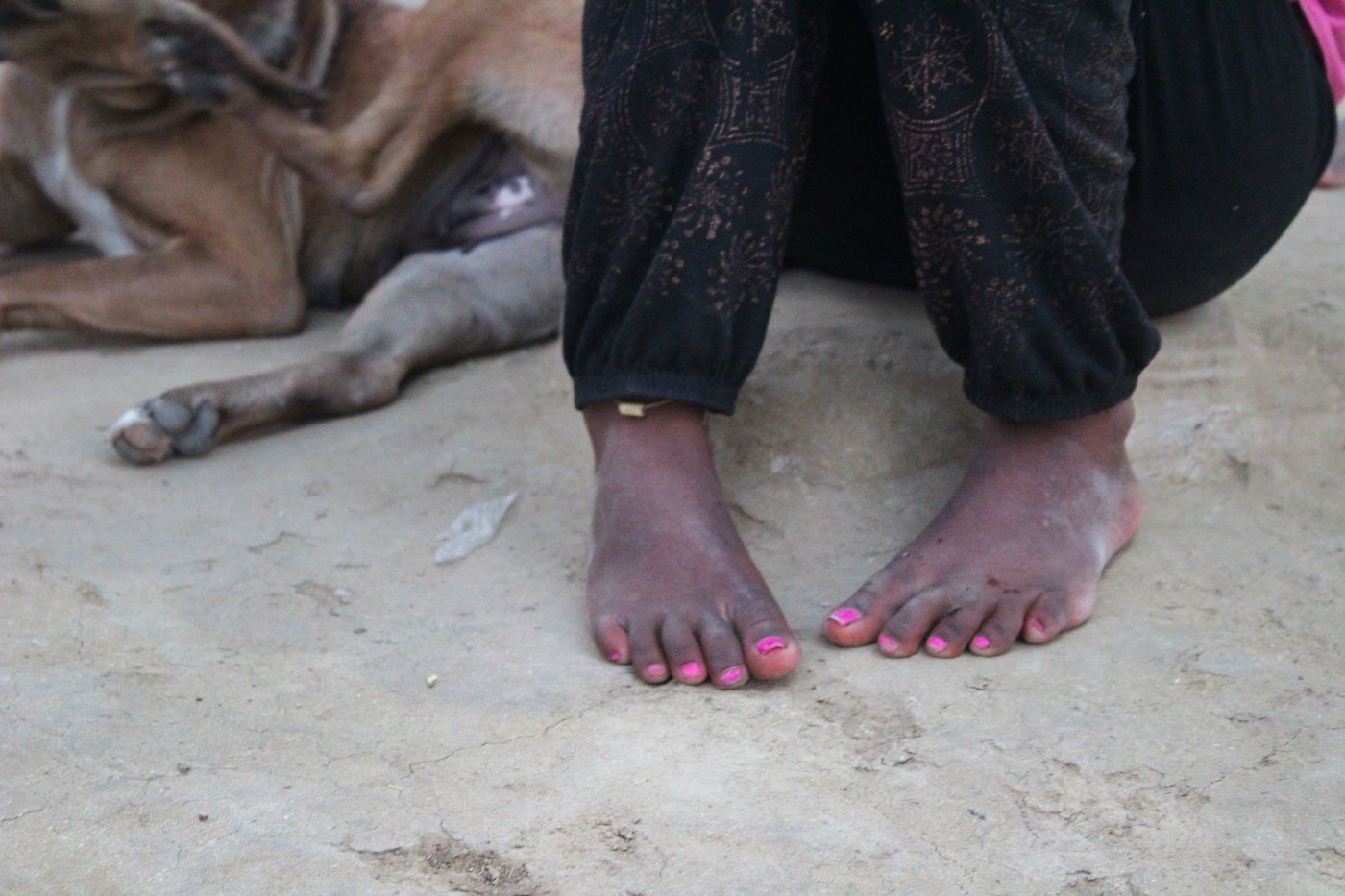 Phoolwatiya, 16, says, 'We normally get pads there [at school] when our periods begin. But now I will use any piece of cloth I can'

Phoolwatiya is not alone. Over 10 million girls like her in Uttar Pradesh are eligible for free sanitary pads – which would have been distributed though their schools. We could locate no figure on how many were actually receiving them like Phoolwatiya. But even if it were a 10th of that number, it would be over a million girls from poor families who are now unable to access free sanitary napkins.

The number of girls in Classes 6 to 12 in UP is 10.86 million, according to a report of the National Institute of Educational Planning and Administration, titled School Education in India . These numbers are from 2016-17, the last year for which data are available.

Under the Kishori Suraksha Yojana (a government of India programme covering every block in the country), girls from Classes 6 to Class 12 are eligible to receive free sanitary napkins. In Uttar Pradesh, the programme was inaugurated by then chief minister Akhilesh Yadav in 2015.

Where does she dry the cloth after washing it? “I put it somewhere inside the house where no-one will spot it. I can’t let my father or brothers see it,” says Phoolwatiya. Not drying the used and washed menstrual cloth in sunlight is a common practice among many girls and women here – as elsewhere – to hide it from the men of the house. 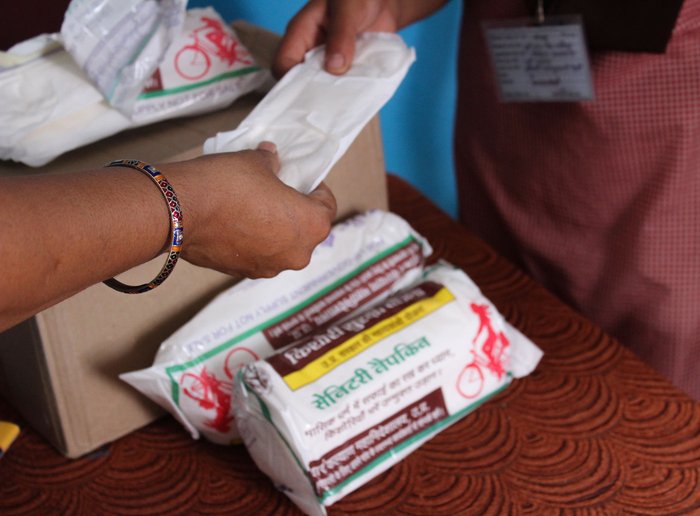 Where does she dry the cloth after washing it? 'I put it somewhere inside the house where no-one will spot it. I can’t let my father or brothers see it', says Phoolwatiya. Not drying the used and washed menstrual cloth in sunlight is a common practice

As UNICEF points out , “A lack of information about menstruation leads to damaging misconceptions and discrimination, and can cause girls to miss out on normal childhood experiences and activities.”

"Usage of soft cotton cloth as a menstrual blood absorbent is safe if it is properly clean, washed and then dried under direct sunlight. Only then can bacterial infections be kept at bay. But all of this is not taken care of in most rural areas and vaginal infections are a common problem among them [girls and young women]," says Dr. Neetu Singh, a senior gynaecologist at the Ram Manohar Lohia hospital, Lucknow. Girls like Phoolwatiya are now back to using unhygienic material instead of pads – which will probably expose them to allergies and diseases.

“We were given 3-4 packets of pads in January in our school,” says Phoolwatiya. “But those are finished now.” And she simply cannot afford to buy them on the market. She would have to spend at least Rs. 60 a month. The cheapest she can get is a pack of six for Rs. 30. She would need two packs each month.

Her father, mother and elder brother are all daily wage agricultural labourers who together make around Rs. 400 a day in normal times. “Now that’s down to Rs. 100 at best and no one wants to give us work in the fields either,” says Phoolwatiya’s mother Ram Pyari, 52, while feeding a grandson khichdi .

Alternative delivery channels don’t exist here. "We are focusing on the basic needs right now, which are ration and food. Saving lives is the only priority in this condition," Chitrakoot district magistrate Shesh Mani Pandey told us. 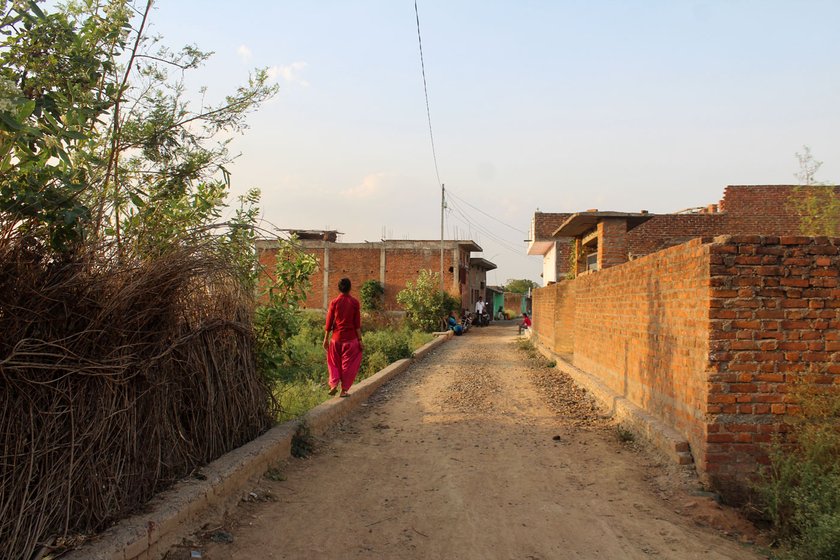 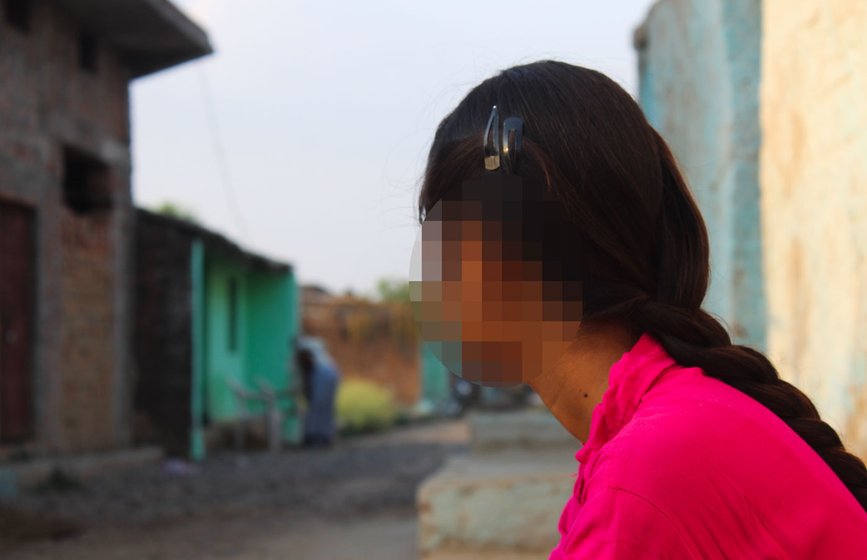 Ankita (left) and her sister Chhoti: '... we have to think twice before buying even a single packet. There are three of us, and that means Rs. 90 a month at the very least'

The National Family Health Survey ( NFHS-4 ) tells us that as many as 62 per cent of young women in the country in the 15-24 age group were still using cloth for menstrual protection in 2015-16. In Uttar Pradesh, that figure was 81 per cent.

There won’t be much to cheer about on this front when Menstrual Hygiene Day comes up on May 28.

The problem seems to be common across districts. “We received the new lot of sanitary pads just a day prior to lockdown and before we could distribute them to the girls, the school had to be closed,” says Yashodanand Kumar, principal, Upper Primary School Salauli village, in the Gosaiganj block of Lucknow district.

“I’ve always ensured the menstrual health of my students. Apart from giving them the napkins, I would hold a monthly meeting with the girls and female staff to talk about the importance of menstrual hygiene. But now the school has been closed for almost two months,” says Nirasha Singh on the phone. She is principal of the Upper Primary School Mawaiya village, in Mirzapur district. “Many of my students have no access to nearby shops where they could find a packet of pads. And needless to say, many others won’t be spending Rs 30-60 a month on it.”

Back in Chitrakoot district, Ankita Devi, 17, and her sister Chhoti, 14, (both names changed) certainly won’t be spending that amount. Living in Chitara Gokulpur village, around 22 kilometres from Phoolwatiya’s house, both teenagers have also switched to using cloth. So has another sister, older to them, who was away when I visited. Both Ankita, in Class 11 and Chhoti in Class 9, go to the same school – the Shivaji Inter College in Chitara Gokulpur. Their father, Ramesh Pahadi (name changed), works as a helper in a local government office and earns around Rs. 10,000 a month. 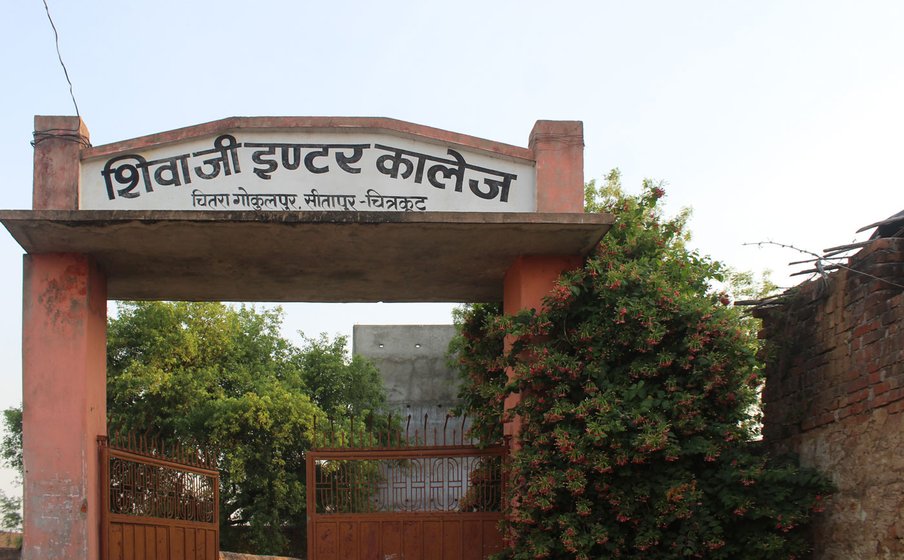 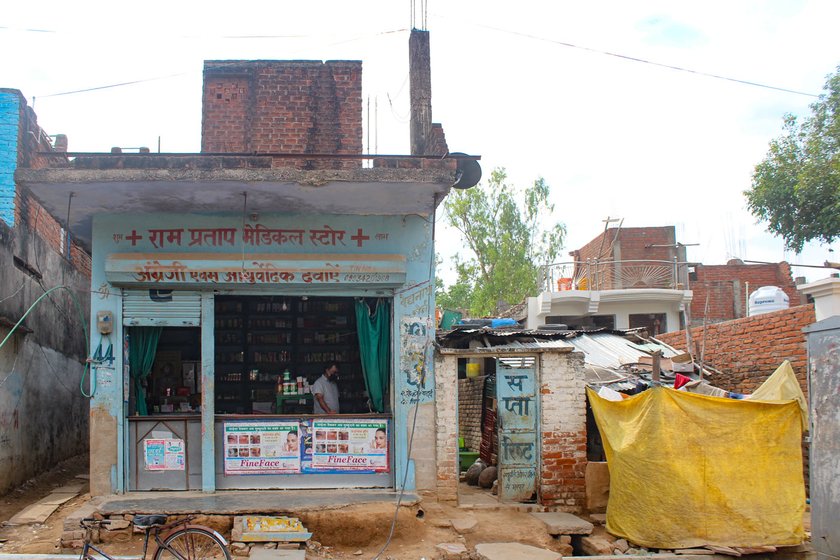 The Shivaji Inter College (let) in Chitara Gokulpur village, where Ankita and Chhoti study, is shut, cutting off their access to free sanitary napkins; these are available at a pharmacy (right) three kilometers from their house, but are unaffordable for the family

“I have no idea if we will get the salary for these two months or not,” he says. “My landlord has been calling to remind me to pay the house rent.” Ramesh is originally from Banda district of Uttar Pradesh, and migrated here for work.

Ankita says the nearest pharmacy is over three kilometres away. There is a general store, barely 300 meters from her house that does stock sanitary napkins. “But we have to think twice before buying even a single packet for Rs. 30,” says Ankita. “There are three of us, remember, and that means Rs. 90 a month at the very least.”

It is clear that most girls here do not have the money to buy pads. “There has not been any rise in sale of sanitary pads after the lockdown,” says Ram Barsaiya, who I spoke to at the pharmacy he runs in Sitapur town in Chitrakoot. And that seems to be the picture elsewhere, too.

Ankita sat for her high school examinations in March. “They went really well. I want to choose the biology stream in Class 11. In fact, I’d asked a few seniors for their old biology textbooks, but then the schools closed down,” she says.

Why biology? “ Ladkiyon aur mahilaaon ka ilaaj karungi [I want to help girls and women],” she giggles. “But I have no idea yet how to proceed on that.”