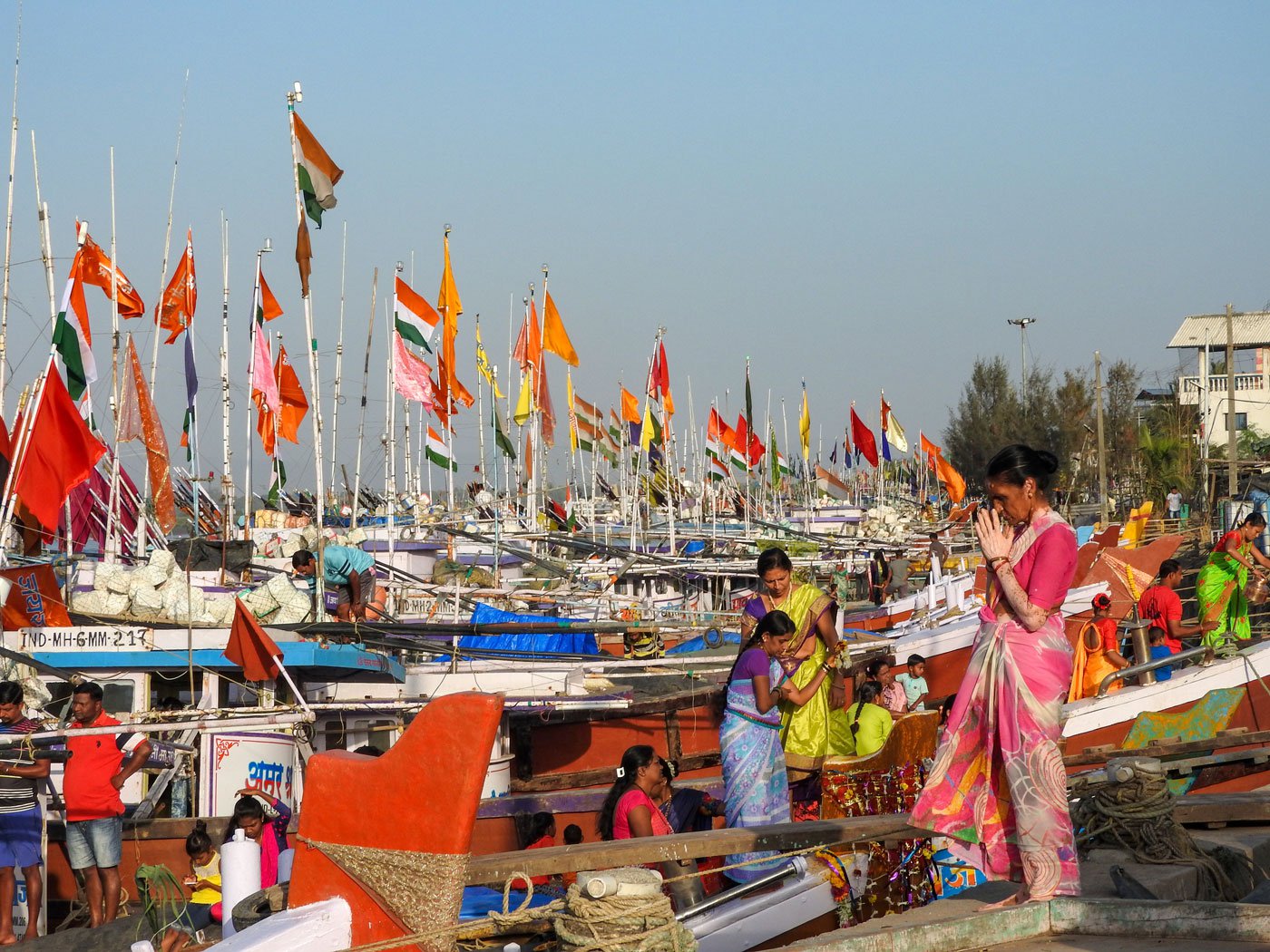 In Satpati: ‘No fish. So what will I sell now?’

On International Day of Rural Women, this story from Maharashtra's Satpati village highlights how, with a drop in fish catch and boats, fisherwomen here are working harder or shifting to assembly line work

Meena Meher’s days are busy. At 4 a.m. she reaches the wholesale market in her village, Satpati, to auction fish for boat owners. Back home by around 9 a.m., she cures fish with salt and stores it for drying in thermocol boxes in her backyard, to be sold after a week or two. In the evenings, she takes a bus or shared autorickshaw to the retail market in Palghar, some 12 kilometres away, to sell dry fish. If any stock remains, she tries to sell it in the evening retail market in Satpati.

But the boats she auctions for are becoming fewer, the quantity of fish she dries is reducing too. “No fish. So what will I sell now?” asks 58-year-old Meena, who belongs to the Koli community (listed as an OBC). So she has diversified – after the monsoon, she purchases fresh fish from boat owners or traders at the Satpati wholesale market, and sells that to try and earn enough. (She does not however tell us any details about her income.)

To make up for the family's income shortfall, her husband Ulhas Meher, 63, is working more too. He continues to occasionally go out on ONGC survey boats as a labourer and sample collector, but has extended his work on big fishing boats in Mumbai from around two months of the year to 4-6 months.

Their coastal village, Satpati, in Maharashtra’s Palghar district, is in what’s been called a ‘Golden Belt’, its seabed recognised for fish breeding and for the famous bombil (Bombay duck). But the bombil catch is decreasing – from a record high of 40,065 tons in 1979 in the Satpati-Dahanu zone, the state produced only 16,576 tons in 2018. 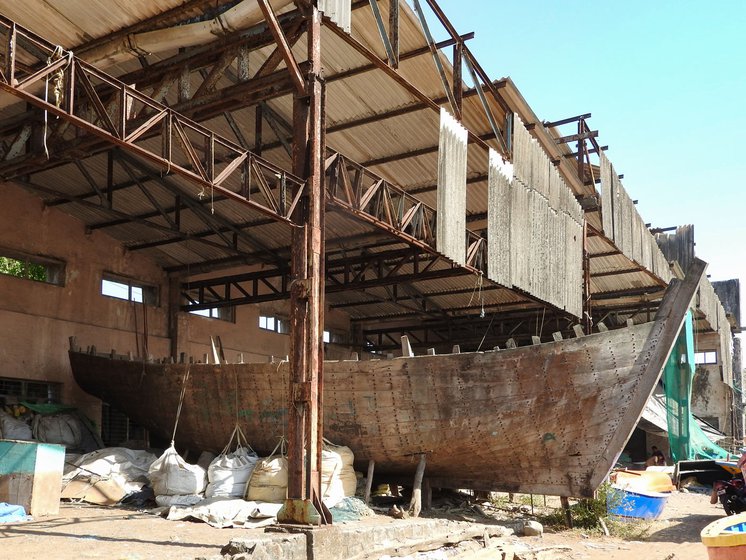 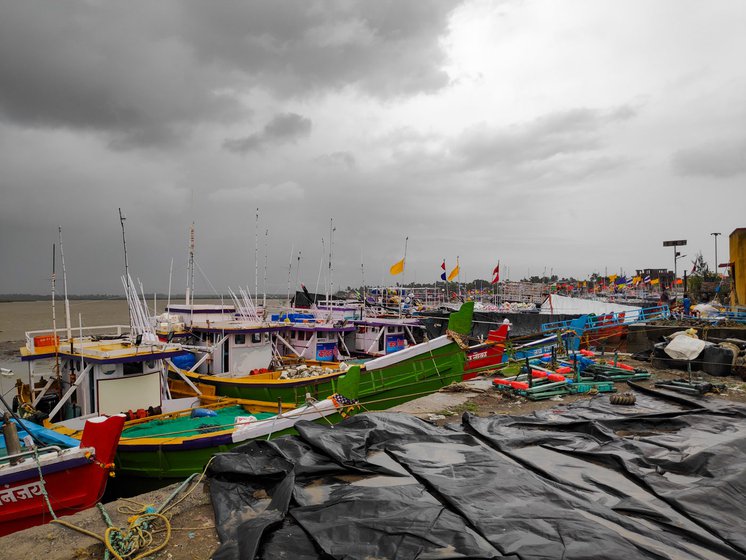 Left: The first mechanised boat in Satpati built at the yard of the Satpati Machhimar Vividh Karyakari Sahakari Sanstha, established in 1944. Right: But this ‘Golden Belt’, its seabed recognised for fish breeding, is sustaining fewer and fewer boats now

The reasons are many – an increase in industrial pollution, overfishing by trawlers and purse seiners (large nets used to capture dense shoals, including smaller fish, which halts their growth).

“Trawlers are not allowed to enter our ocean, but no one stops them,” Meena says. “Fishing was a community occupation, but now anyone can buy a boat. These big boats kill the eggs and small fish, leaving us with nothing.”

For long, Meena and other auctioneers have been called by local boat owners whenever there is fish to sell – but now there is no guarantee like before that the boats will come back with a full load of bombil and silver pomfret, along with smaller fish like mushi , wam and others. Meena now auctions for only two boats – down from up to eight until around a decade ago. Many boat owners here have stopped fishing.

“In the 1980s, there were 30-35 boats fishing in Satpati [for bombil ], but this number reduced to 12 [by mid-2019],” confirms Narendra Patil, president of the National Fishworkers Forum and former chairman of the Satpati Fishermen Sarvodaya Cooperative Society. 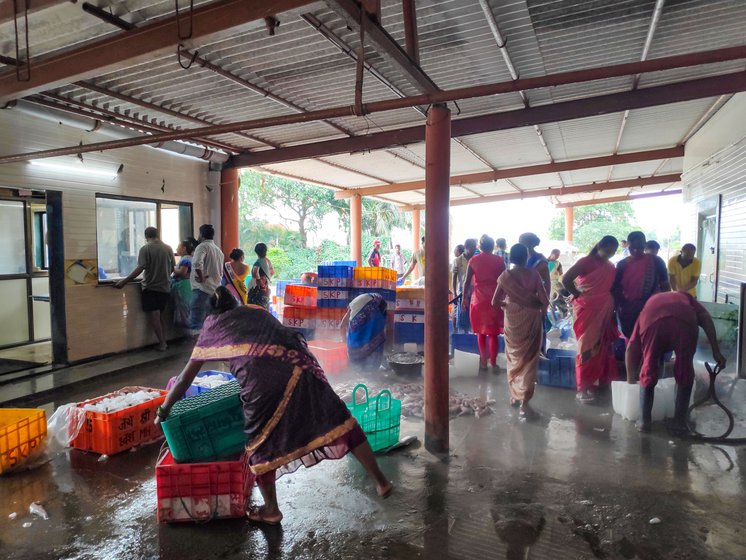 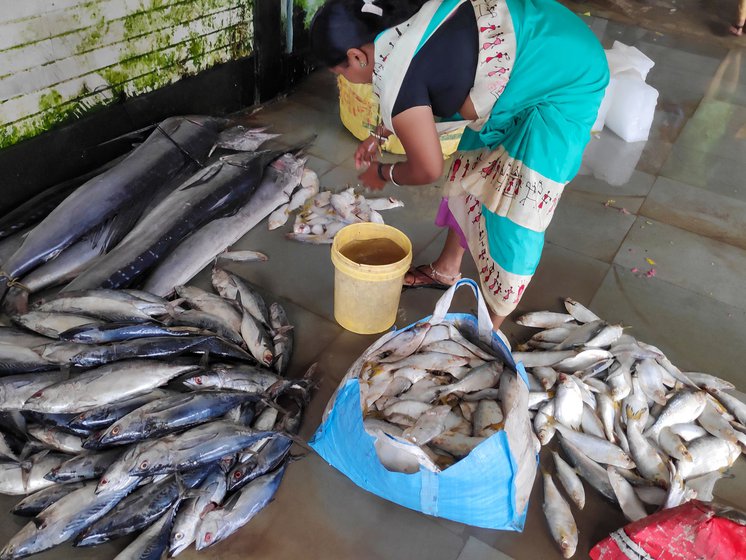 At the cooperative society factory (left) buying ice to pack and store the fish (right): Satpati’s fisherwomen say this is the only support they receive from the co-ops

The entire fishing community in Satpati – the gram panchayat and cooperative societies estimate the population here is now  35,000 (up from the 17,032 listed in Census 2011) –  is facing the impact of this decline. A fisheries primary school (with a regular academic curriculum) set up in 1950 by the state government and transferred to the zilla parishad in 2002, is in decline. Similarly, a marine fisheries training centre offering specialised course, set up in 1954, is no longer operational. Only two fisheries cooperative societies remain, and function as intermediaries between boat owners and fish exporters, and as a source of loans, subsidies on diesel and other services for fishermen and boat owners.

But Satpati’s fisherwomen say they have received no support from either the government or the cooperative societies – which offer them only ice and cold storage space at nominal rates.

“The government should give every fisherwoman at least Rs. 10,000 for our business. We don’t have money to buy fish to sell,” says 50-year-old Anamika Patil. In the past, women here would usually sell fish caught by family members, but now many have to purchase it from traders – and that requires credit or capital which they don’t possess.

Some have taken loans of Rs. 20,000-Rs. 30,000 from private lenders. Institutional borrowing is not an option “because we have to mortgage our jewellery or house or land,” says Anamika, who has taken a Rs. 50,000 loan from a boat owner. 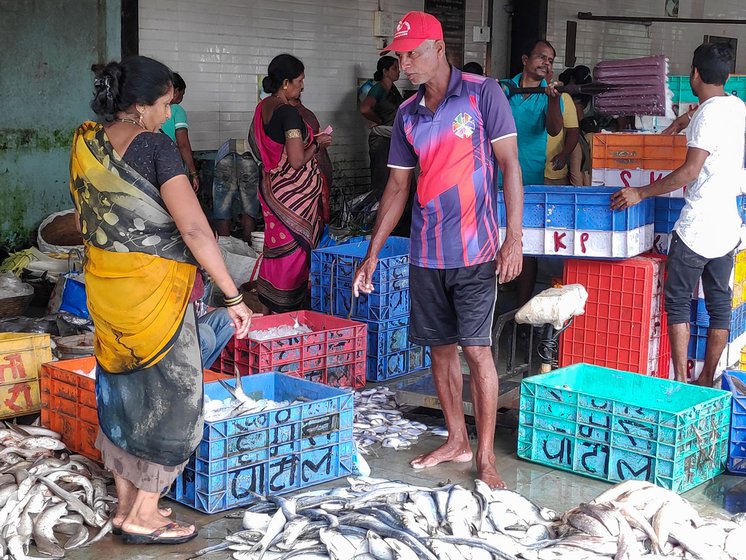 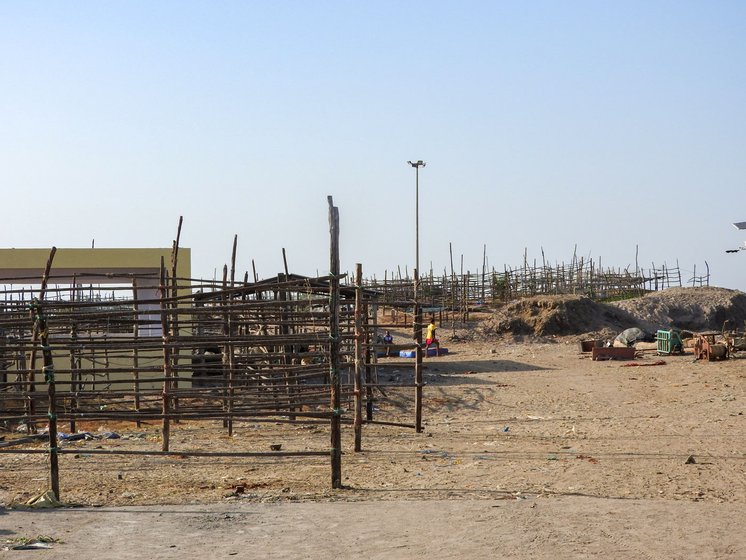 Left: Negotiating wages with a worker to pack the fish stock. Right: The Bombay duck stock though, dried on these structures, is dimnishing

Other fisherwomen have moved out of the trade — wholly or for a portion of their work-day. “With the fish stock reducing, the women engaged in drying Bombay duck have had to adapt. They are now going to Palghar for jobs or for any work in the MIDC [Maharashtra Industrial Development Corporation] complex,” says Ketan Patil, chairman of the Satpati Fishermen Sarvodaya Cooperative Society.

“Satpati used to be filled with bombil , we would sleep outside because our houses were full of fish stock. Once the catch started decreasing, it became very difficult [to earn enough] and this is when we switched to other jobs,” says Smita Tare, who has been working at a pharmaceuticals company in Palghar for around 15 years, doing assembly line packaging tasks. For a 10-hour a day shift, six days a week, she earns roughly Rs. 8,000 a month. Her husband too does not fish anymore, but plays the drum in a band during weddings and other events in Palghar or other places.

Palghar town is around 15 kilometres away. In the mornings now, a line of women stand at the local bus stop waiting to go to work.

Meena’s daughter-in-law Shubhangi, 32, too started working in a Palghar appliances unit in February 2020, where she packs coolers, mixers and other items, earning Rs. 240 for a 10-hour shift, or Rs. 320 for 12 hours, with a weekly off every Friday. (Shubhangi’s husband Prajyot, 34, helps Meena with the fish processing, and works at the fisheries cooperative society, though there are fears about losing this permanent job because the cooperatives too are struggling.) 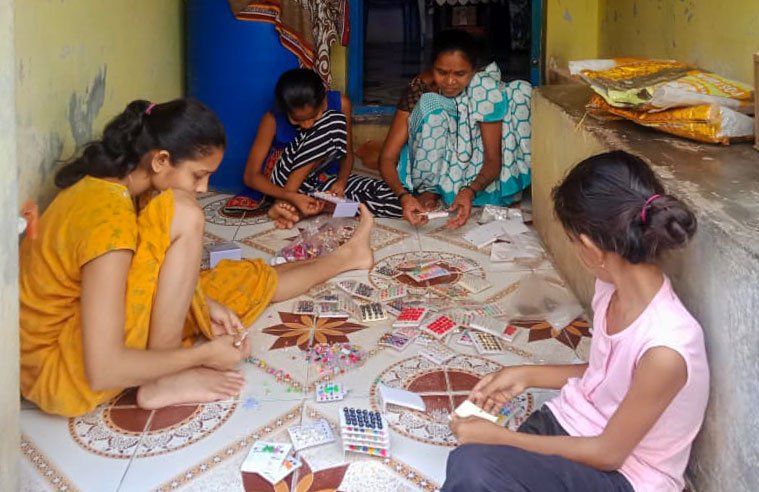 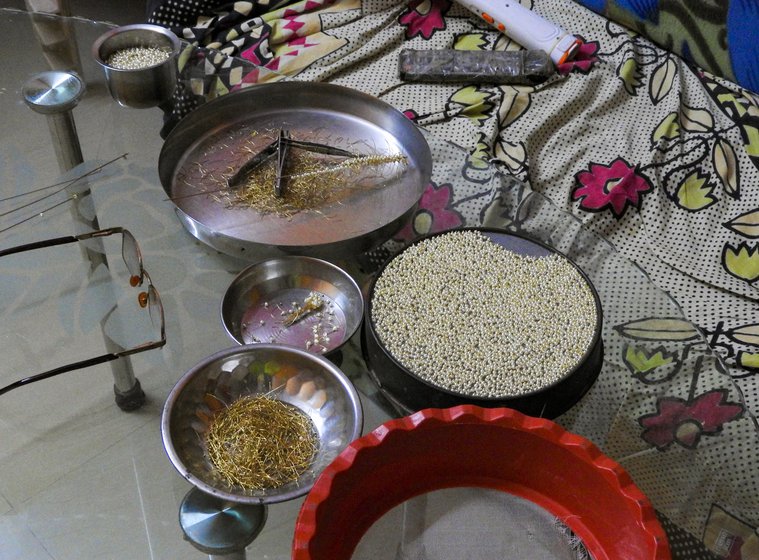 Left: Many women in Satpati have moved out of the fishing trade; while some are at assembly line jobs in Palghar, others do piece rate jewellery work. Left: The hours Meena spends doing bead work strains her eyes

Meena herself now spends 2-3 hours every day with a plate of white beads, golden coloured metal string, a big circular sieve, a nail cutter and her spectacles. Her task is to pass the string through the beads and make a closed hook. She earns, from a woman in the village who gives out this work, Rs. 200-250 for 250 grams of finished beads – which can take a week to complete. From this amount, she spends Rs. 100 to buy the raw material again.

For Bharati Meher, 43, whose family owns a boat, the decision to join a cosmetics company was made in mid-2019 after income in the fishing trade began falling. Until then, in addition to auctioning and selling fish, Bharati and her mother-in-law would, like Meena, make artificial jewellery.

While many in Satpati have moved on to other livelihoods, a sense of a time gone by prevails in conversations. “After some years, we will have to draw and show our kids what a pomfret or bombil looks like – there will be none available here,” says Chandrakant Naik, a retired BEST driver who now goes fishing on a small boat owned by his nephew.

Still, many others are sure that nostalgia cannot convince them to stay on in fishing. “I don’t let my kids enter the boat. Small [fishing-related] tasks are okay, but I don’t take them on the boat,” says 51-year-old Jitendra Tamore, who inherited a vessel from his father. The family also owns a fishing net shop in Satpati, which helps them stay afloat. “We were able to educate our sons [20 and 17 years old] only because of the net business,” adds his wife, 49-year-old Juhi Tamore. “But the way our life is going on, we don't want them to enter the fishing business at any cost.”

Some of the interviews for this story were done in 2019.

Cover photo: During the Holi festival, on March 9, 2020, women in Satpati praying to the sea god for a prosperous season and safety for their men when they are out at sea. The b oats are decorated and worshipped too for the festival.
#purse-seiners #Koli-women #bombil #Satpati-Fishermen-Sarvodaya-Cooperative-Society #piece-rate-work #Bombay-duck #fish-auctioneers #assembly-line-jobs #Golden-Belt #trawlers
Ishita Patil

Ishita Patil is a Research Associate at the National Institute of Advanced Studies, Bengaluru.

Nitya Rao is Professor, Gender and Development, University of East Anglia, Norwich, UK. She has worked extensively as a researcher, teacher and advocate in the field of women’s rights, employment and education for over three decades.