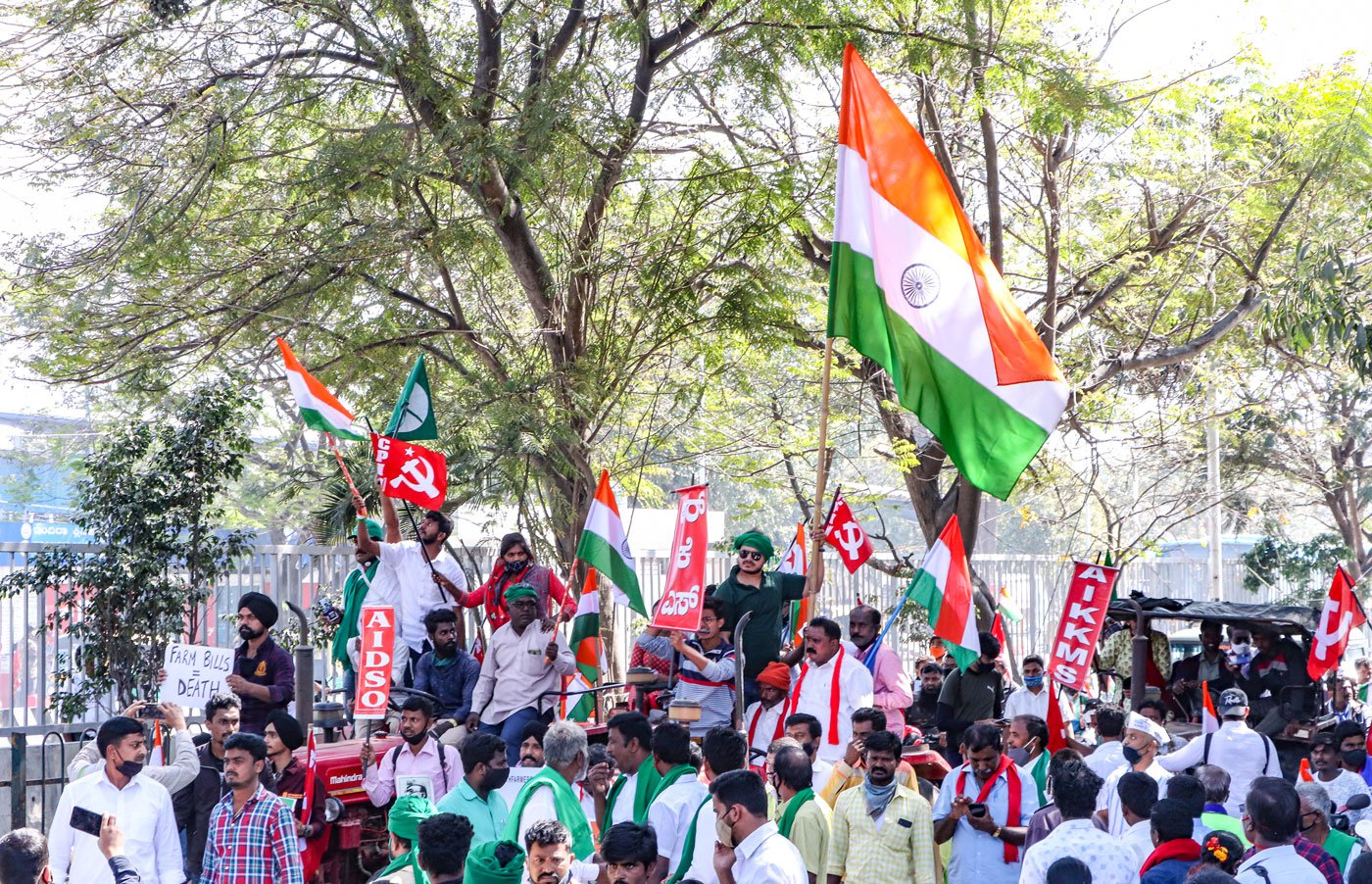 Farmers from north Karnataka arrived by trains and buses in Bengaluru on Republic Day, to support the Delhi tractor parade and reiterate their resistance to corporate-centred farm policies

“This government does not care about farmers. It is on the side of the big companies. The APMC is also being given to them. Why are they helping them and not farmers?” asked Shanta Kamble, an agricultural labourer from Belagavi taluk of Belagavi district in north Karnataka.

Sitting on a road divider near Bengaluru City railway station, in the Majestic locality in the central part of the city, she was listening to the cries of ‘ Kendra sarkara dhikkara ’ (We condemn the central government) ringing out around her at noon.

Shanta, 50, had reached Bengaluru by bus on the morning of January 26 to take part in the farmers’ Republic Day protest rally. That morning, farmers and farm workers from all over Karnataka were arriving in Majestic by trains and buses to go to Freedom Park – two kilometres away – and attend a meeting to support the tractor parade of farmers protesting in Delhi against the three new farm laws.

Back home, Shanta earns Rs. 280 for a day’s work, planting crops like potato, pulses and groundnut, and weeding farmland. She takes up MGNREGA jobs when there is no farm work. Her sons, who are 28 and 25 years old, do construction work available under MGNREGA.

“We didn’t have proper food or water during the [Covid-19] lockdown,” she said. The government is never concerned about us.”

A group of farmers in the parking area of the railway station were shouting, “We want APMC. The new laws must go.” 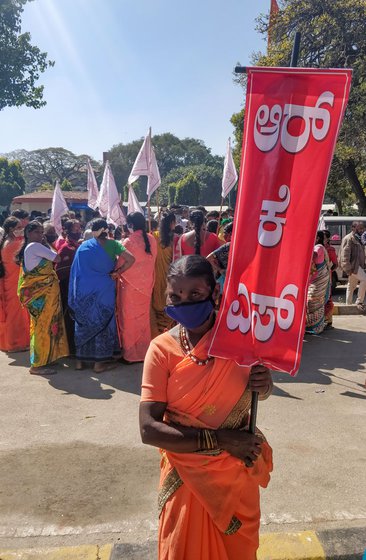 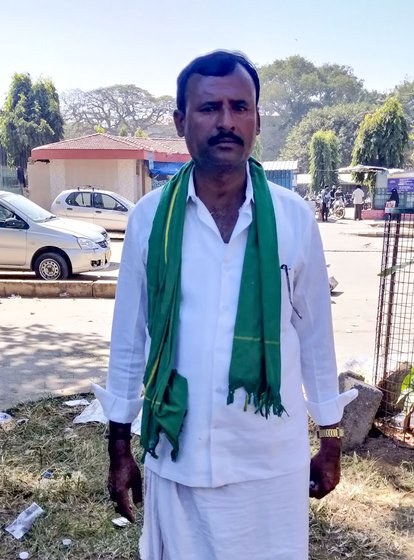 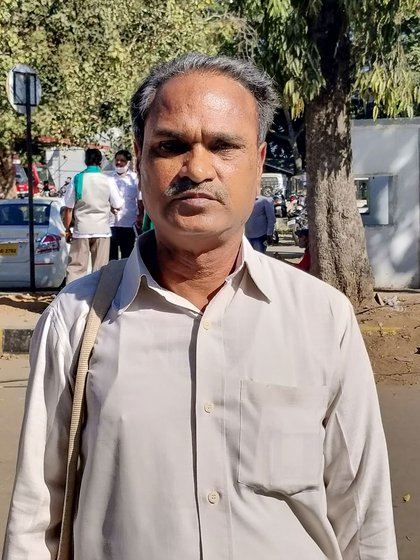 Last year, the government-run APMC (Agriculture Produce Marketing Committee), had helped 50-year-old Krishna Murthy. Due to erratic rains, the farmer from Banapura village in Ballari taluk , Ballari district, had lost a portion of his crops — cotton, maize, ragi , coriander and tur . He took what was left on his 50-acre farmland and sold it at the APMC. “A lot of money goes into farming,” said Murthy. “We spend almost a lakh [of rupees] per acre and earn back only half of what we spend.”

The three farm laws that have united farmers all over India are The Farmers’ Produce Trade and Commerce (Promotion and Facilitation) Act, 2020 ; The Farmers (Empowerment and Protection) Agreement on Price Assurance and Farm Services Act, 2020 ; and The Essential Commodities (Amendment) Act, 2020 . They were first passed as ordinances on June 5, 2020, then introduced as farm bills in Parliament on September 14 and hastened into Acts by the present government on the 20th of that month.

The farmers see these laws as devastating to their livelihoods because they will expand the space for large corporates to have even greater power over farmers and farming. The laws also undermine the main forms of support to the cultivator, including the minimum support price (MSP), the agricultural produce marketing committees (APMC), state procurement and more. They have also been criticised as affecting every Indian as they disable the right to legal recourse of all citizens, undermining Article 32 of the Indian Constitution.

‘ Oppodilla! Oppodila! ’ (We won’t accept it) chorused the farmers in Bengaluru.

“We demand the immediate repeal of the three draconian farm laws,” said P. Gopal, state secretary of the Karnataka Rajya Raitha Sangha (KRRS). “Nearly 25 to 30 organisations in the state are participating in these protests. More than 50,000 farmers and workers are coming from all over Karnataka. The central government’s claim that only Punjab and Haryana farmers are protesting is completely wrong,” he added. 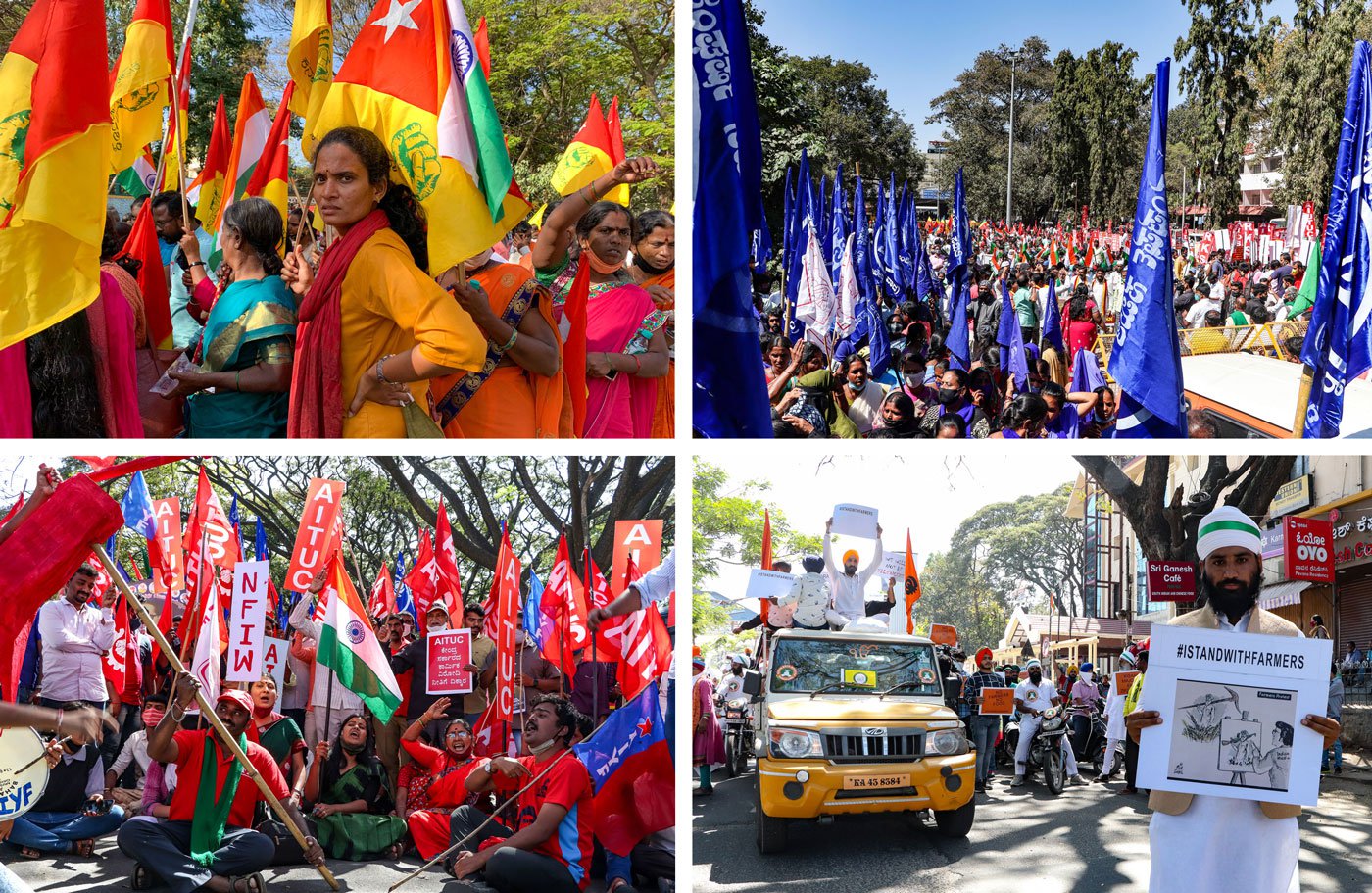 About 30 organisations are said to have participated in the Republic Day farmers' rally in Bengaluru. Students and workers were there too

“The government is against the farmers. Even here, in Karnataka, Chief Minister B.S. Yediyurappa is clearly with the corporates. He amended the Land Reforms Act [in 2020] in favour of big companies and unilaterally introduced the cow slaughter bill,” said Gopal.

Standing with a group of women outside the railway station was A. Mamata, a 36-year-old farmer from Shiggaon taluk in Haveri district. She grows cotton, ragi and groundnuts on her nine-acre farmland. “We don’t want corporate mandis . The government should instead make APMCs stronger and eliminate middlemen. They should introduce efficient ways of purchasing crops directly from the farmers,” she said.

Around her, the crowd chanted, “The new laws are for Adani, Ambani.”

In a corner of the railway station’s parking area, the travelling protestors were being offered hot food in paper plates. Members of the Karnataka Mangalamukhi Foundation (KMF), a statewide organisation of transgender persons, had prepared steaming rice pulao . “It is our duty. We have been brought up on the food cultivated by farmers. We are eating the rice grown by them,” said Arundhati G. Hegde, general secretary of KMF.

The KMF owns five acres of land in Tarikere taluk , Chikkamagaluru district, where the organisation cultivates paddy, ragi and groundnuts. “We all come from farmer families. So we know how important this protest is. We are here doing our part in this struggle,” said Arundhati. 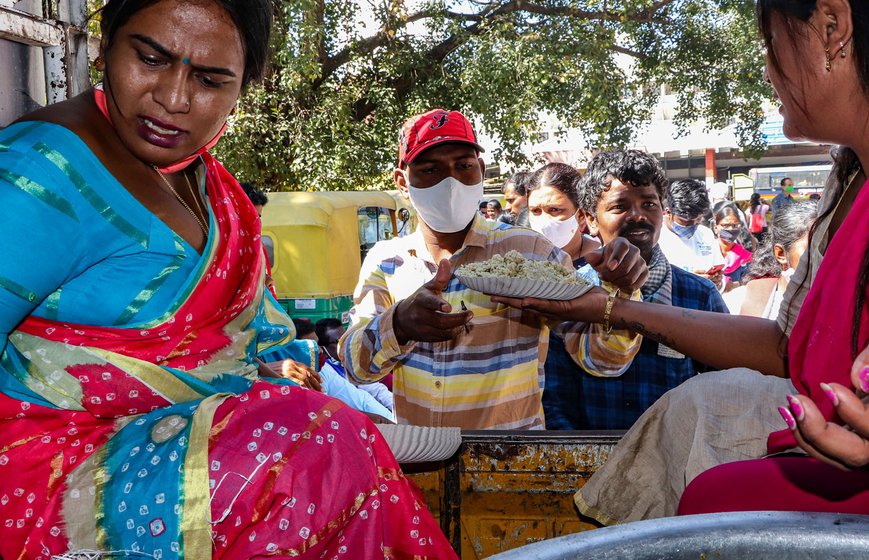 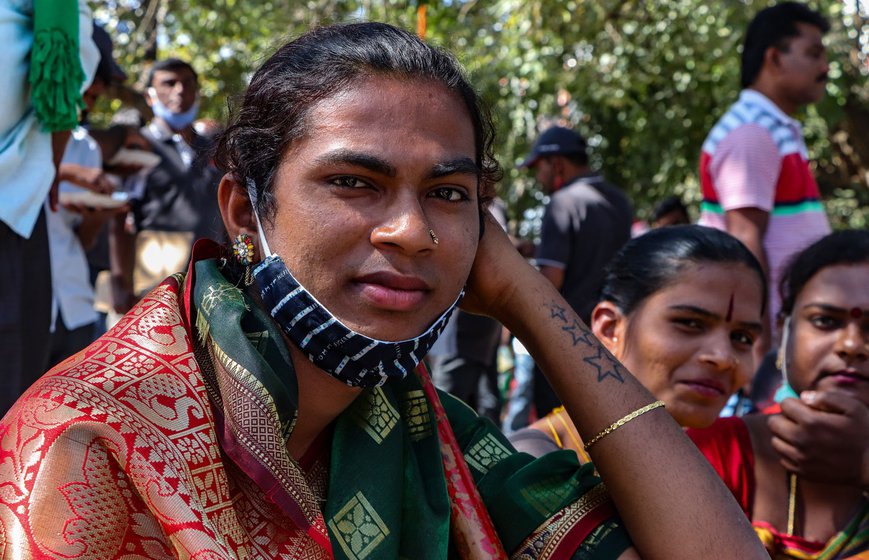 At Bengaluru railway station, Arundhati G. Hegde (in pink saree ) and other members of Karnataka Mangalamukhi Foundation, a collective of transgender persons, served steaming rice pulao to the travelling protestors

But by 1 p.m. on January 26, the police barricaded the Majestic area and prevented the protestors from proceeding to Freedom Park for the meeting.

“The state government is against these democratic protests. It is using the police to curb dissent,” said KRRS leader Gopal, adding that even students and workers from all over the state had come to the city to express their solidarity.

The extreme measures angered Ganga Dhanwarkar, a farmer from Ballari. “We aren’t fools to have left our homes, families and farms and come here to protest without any reason. More than 150 farmers have died in the protests in Delhi. They have been there in the biting cold, living on the streets with their children in tents.”

The reason to protest, she said, was because “These laws are not for the people, the farmers or workers. They are only for the companies.”

Arkatapa Basu is a freelance journalist based in Kolkata, West Bengal.

Other stories by Arkatapa Basu