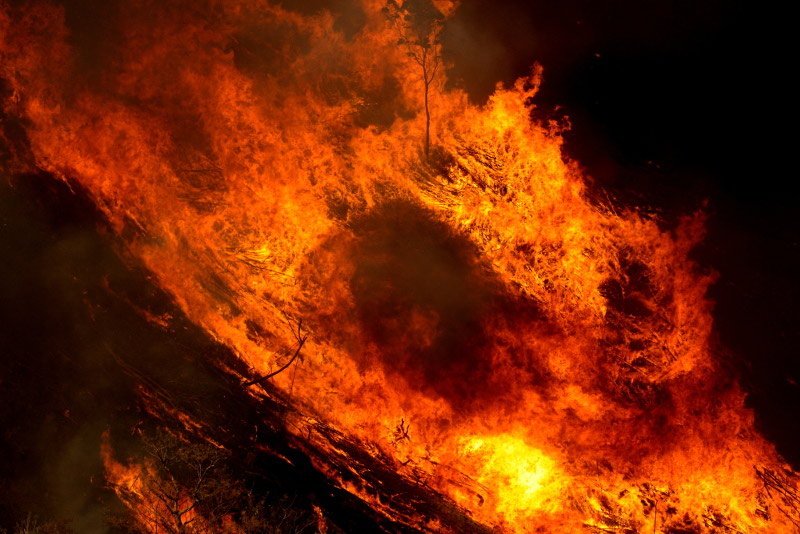 In March, the mountains of Mizoram come alive with the dance of the bamboos

March 15, 2014: Today, farmers of the Serhmun village would start a fire on the hills near Tuilut, to meet a deadline set by the state government. We were in Damparengpui, a remote village in Western Mizoram, from where we wanted Lal Sanga to take us in his autorickshaw up the bumpy, winding hill road to Tuilut.

“Do you really want to go all the way to see that ?” he asked. It would turn out to be the loudest, hottest, most spectacular fire that I had witnessed at close range. A deliberate fire that would reduce to ashes what had been, until some weeks ago, a dense bamboo forest. And yet, the fire did not signify destruction as much as it did a new beginning.

From the skies of Mizoram, the hills look like a green patchwork carpet, broken by small openings. The bamboo forests sway in light greens and fading yellows, amidst straw-coloured fields of cut bamboo drying in the sun and more verdant strips with tall trees along ridges and ravines.

In the month of March, spectacular fires erupt over agricultural fields across the hills of Mizoram. The fires punctuate the vast landscape where farmers had cut down bamboo and forest vegetation to dry them out in the sun for weeks before the burn.

The windows of a bamboo hut, perched on the slopes of a steep hill near Tuilut, offer a view of fields, fallows, forests, and the valley of the Sengmatawk Lui ( lui means river in the vernacular Mizo tawng ). All around, the forests lie in various stages of regeneration, marking the fields of the past, the present, and the future.

This remarkable landscape mosaic is a result of the dominant farming system practiced in these hill tracts: the rotational system of shifting agriculture, locally known as lo or more widely referred to as jhum across northeast India.

At around half past two, six farmers walk briskly past the hut, down the slope, towards a large field of dry bamboo on another slope across the valley. I ask if we can take photographs of the fire; they accede without breaking their stride, in a hurry to get started.

They reach the field and fan out along the base. Timing is crucial, so the farmers shout to each other to coordinate their movements. They torch the dry vegetation at several points using matches and faggots. The fires catch immediately and grow rapidly. The flames lick their way in as roiling gusts, scudding across the fields of tinder-dry vegetation, while the men back away to a safe distance. Higher up on another steep slope, a lone farmer sets his smaller two-hectare field on fire.

The parched bamboo culms crackle and burst in sputtering explosions, and a distant thunder of the conflagration carries over the hills.

Plumes of smoke billow over the landscape, sending ash and scorched leaves sailing in the wind. (Neighbouring villages may know of jhum from the descending ash, even if they cannot see the fire.) At the height of the blaze, all the way across on the opposite slope, we are buffeted by the wind and heat. It looks as if the great fire will consume everything in its path. And then, suddenly, the fire dies almost as quickly as it began. The two-hectare field burns in less than fifteen minutes; the larger field, over ten times as big, takes about an hour.

As the fire subsides, the funereal colours and thunder give way to an ash grey soil and to the silence of smoke rising from the earth.

These ephemeral fires open up a few hectares of fields and enrich the soil with ash. The fire, which is usually set to burn the fields from one demarcated edge to the other or work its way inwards as a ring, generally remains well contained. When it escapes as ground fire, it is often due to surrounding land-use changes.

Monoculture plantations that were absent two decades ago (oil palm, rubber) or were more limited in area (teak) increasingly occupy or abut traditional jhum lands. While bamboo forests retain their greenery even at the peak of the dry season, the teak plantations turn bare and brown.

A few weeks after the fires, with the onset of pre-monsoon rains and thundershowers, the farmers will plant another season of crops. In each small field, they will cultivate around two-dozen varieties of crops including rice, vegetables, tubers, bananas, chillies, and cash crops.

After the harvest, the spent fields will be left to rest and farmers will move to clear a new site for the following year. In the rested fields, soil and vegetation recover naturally as the forest of bamboos rises again. The farmers will return to the site to restart the cycle of cultivation once the forest has taken a few years to regenerate.

With no external inputs such as chemical fertilisers or pesticides, jhum continues to remain an entirely organic system of multi-cropping, arguably a better form of land-use than the intensive monoculture plantations being promoted by state and industrial interests in Mizoram. Still, the decks are stacked against jhum, regarded as a primitive and destructive agricultural practice; at least partly due to the sheer visual impact of seeing forests cut and burnt in such spectacular fires. Sadly, this is too narrow a perspective.

As we leave Tuilut in the evening, I look back at the burnt slope, the green forests, and the Sengmatawk Lui flowing into the valley. To gain an appreciation of jhum , one needs to look beyond the burn and see the years of rapid regeneration that bring back dense bamboo forests to rested fields. More important, perhaps, one needs to learn to see the diverse landscape mosaic of fields, fallows and forests, as the farmer does, through the windows of the bamboo hut.

In the jhum landscape of the Lushai hills of Mizoram, the dominant bamboo is Mautak (Melocanna baccifera), a species that regenerates rapidly in rested fields and is crucial to the sustenance of the jhum system. Over 7,000 sq km, about a third of Mizoram, is swathed in bamboo forests, much of which is created and maintained by this practice of shifting agriculture or jhum.

Almost everywhere one looks in Mizoram, one sees bamboos.

Houses made of bamboo perch on the steep slopes. Baskets and beds made from bamboo adorn the interiors, along with bamboo kitchen implements and pipes, bamboo walls, floors, ceilings, and mats—everything from sieves and lunch boxes to furniture and fish traps are made using bamboo.

Here, even the cradles are made of bamboo, as are the coffins.

Bamboo vinegar is made as a byproduct of bamboo charcoal production. Bamboo coffins are promoted as a more affordable and accessible alternative to wooden coffins in this predominantly Christian state.

On the first Friday of March, the people of Mizoram celebrate the spring festival of Chapchar Kut in which the cheraw bamboo dance occupies centre stage. The festival marks the period when the slash lies drying on the slopes prior to the onset of the next season of cultivation.

On the morning of Chapchar Kut , it is bright and sunny over the open grounds of the Assam Rifles Stadium in Aizawl. As the crowd pours in through the gates from the traffic-choked road outside and fills the stands, young Mizo men and women carry stacks of long green bamboo culms onto the grounds. Like many in the audience, they wear traditional dresses of bright red, green, black and white, striped and hatched with curiously bamboo-like designs. The boys wear dark cloth headbands patterned with perpendicular crossing stripes, and the girls wear bamboo-weave headbands topped by a ring of brilliant red plumes.

The culms are placed on the ground in sets of ten. Eight boys crouch at the feet of the eight dancing girls to beat the culms to the rhythm of the dance. The stadium brims with bustling, noisy crowds of people, and hawkers peddle their wares, which range from betel leaf to cotton candy. As the cheraw performance begins, the entire arena comes alive.

To the clap and beat of the bamboo, to the rhythm of drum and gong, the girls dance with grace and flourish. The dancers’ feet move between the clapped bamboo culms as they step and turn and toss.

The cheraw performance, with its dancers stepping in and out of the moving culms within the bounds of the bamboo, seems to symbolise the practice of lo —the enduring dance of the bamboos on the mountains of Mizoram.