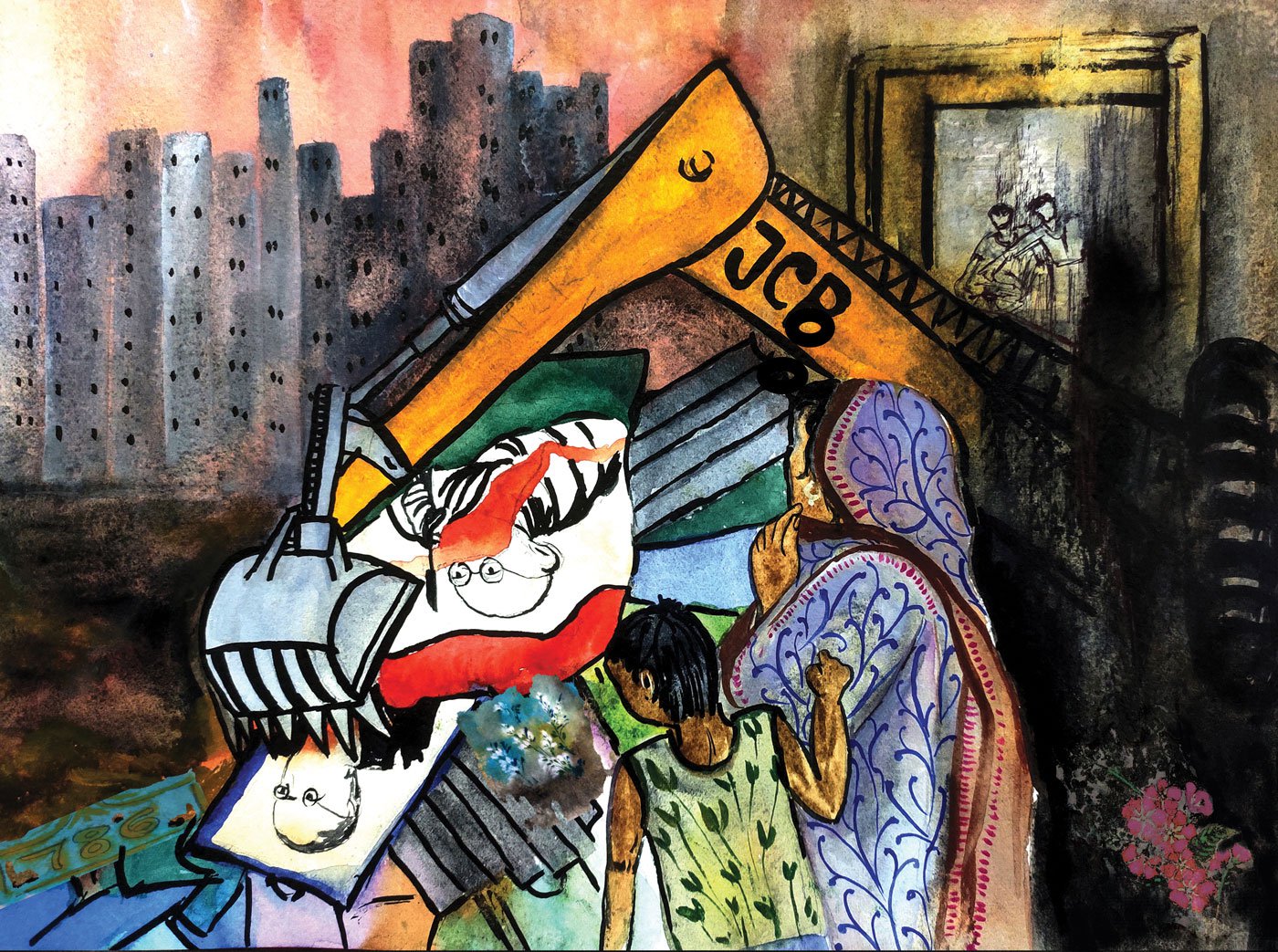 Between bulldozer blades: flowers and hope

Her life lay shredded by a bulldozer. As if the riots a few days ago had not done enough. But the wild flowers, she knows, will grow like hope from the vicious claws of these machines. A poem

She stood empty-handed on the pavement. A monument of grief. She was no longer trying to retrieve anything from their vicious claws. She couldn’t keep the numbers steady in her head and so had stopped counting her losses. From disbelief to fear to rage to resistance to utter despair to numbness – she had traversed many states in a matter of minutes. Now she was just watching the mayhem like many others on both sides of the street. Eyes welling up with almost frozen tears and a choking lump of pain in her throat. Her life lay shredded at the feet of a bulldozer. As if the riots a few days ago had not done enough.

Nazma knew times were changing for a while now. Not just the way Rashmi looked at her when she went to ask for some starter from her to set curds. Nor was it about a nightmare that visited her regularly since she joined the women protesting at Shaheen Bagh, and found herself standing all alone on a small piece of land surrounded by deep trenches. What was changing was also inside her, how she felt about things, herself, her girls, her country. She was afraid.

Though being robbed of what they thought was their own was not the first time in the history of the family. She was sure Dadi knew this feeling, tailgated by communal rioters carrying flames of hatred. A little finger tugged at her chunni . She turned around and was greeted with a helpless smile. That is when her thoughts turned wild again…

Heavy, ruthless blades
haul and push debris away,
excavate ghosts of history,
demolish mosques, minarets.
They can even uproot an old banyan,
nests and aerial roots and all.
Make way for bullet trains,
remove stumps and boulders,
clear battlefield obstacles,
prepare firing positions.
Iron claws of sharp rippers
break down dense, resistant grounds.
They know how to crush, clear, and level things up.

But when you are done with all of it
You still have to deal with these pollinators
fiery, potent, soft, love-filled
falling out of books
sliding off tongues.
You don't need bulldozers
to tear those defiant books
or to rip the loose tongues off.

But what to do with them,
escaping on the back of chance winds,
riding on the wings of birds and bees,
sliding on river waters,
diving underneath the lines of a poem
pollinating without restraint
here, there, everywhere?