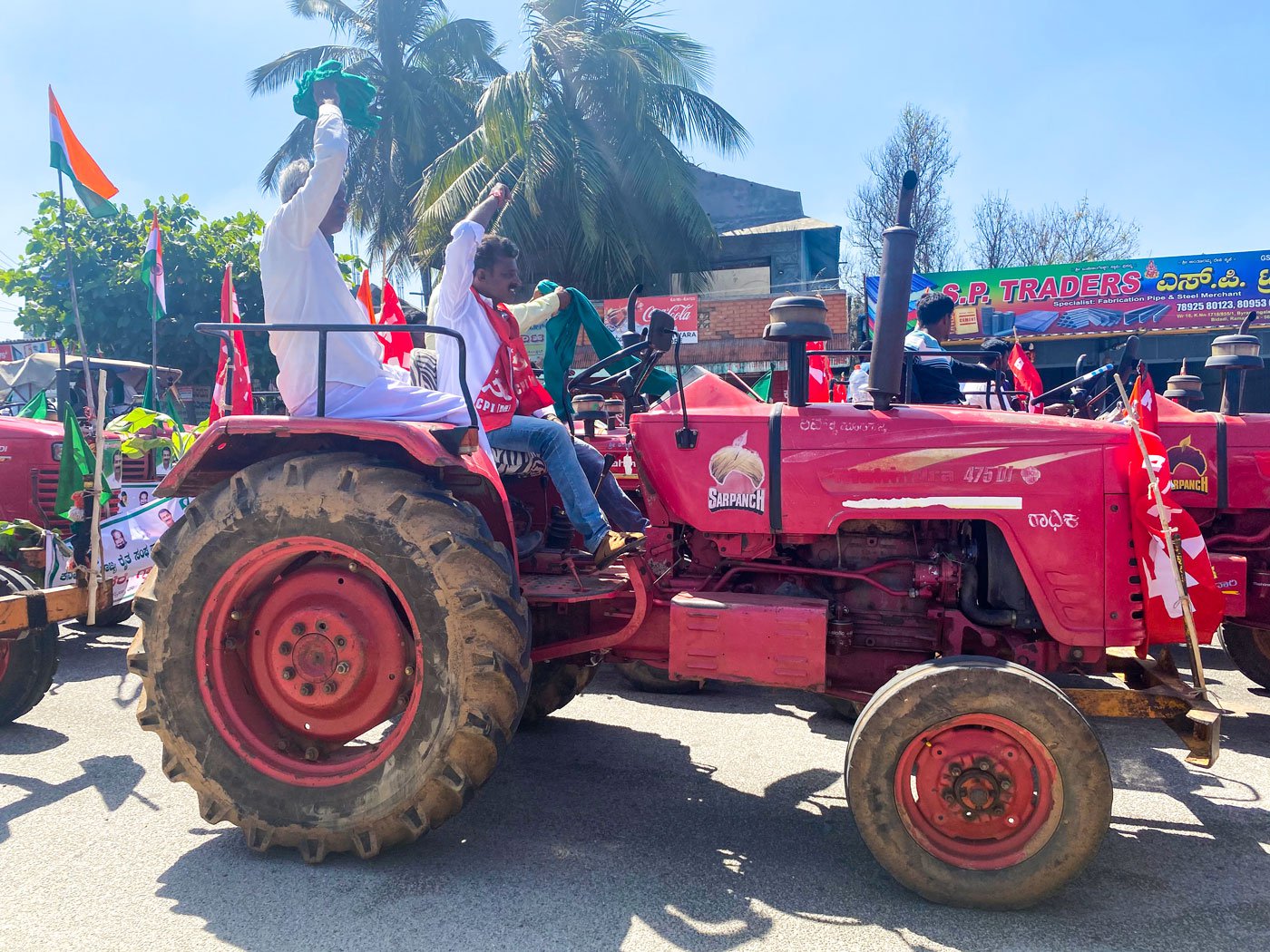 ‘A day will come when there will be no farmer’

The new farms laws impact farmers all over India, say farmers from across Karnataka. Many of them joined the tractor rally in Bengaluru on Republic Day to support the farmers' parade in Delhi

“There’s going to be no MSP, they will slowly shut down APMCs and they’re privatising electricity. We have every reason to worry,” said a distraught D. Mallikarjunappa, a farmer from Karnataka’s Shivamogga district.

Mallikarjunappa, 61, had come to Bengaluru on January 25 from Huluginakoppa village to join the farmers’ Republic Day tractor parade there the next day. He had travelled about 350 kilometres from his village in Shikarpur taluk . “Instead of listening to the big companies, they [the central government] should reform the APMCs so that we get the right price,” he said.

The new farm laws have added to his worries – they will undermine the minimum support price (MSP) and the agricultural produce marketing committees (APMC) that guaranteed the farmers procurement of their food grains.

Mallikarjunappa cultivates paddy in 3-4 acres of his 12-acre land. He grows arecanut in the rest. “The arecanut yield was poor last year, and I didn’t get much paddy either,” he said. “I have to pay back bank loans of 12 lakh rupees. They [the state government] said they would waive the loan. But the banks are still sending me many notices and warning me about penalties. I am worried about all that too,” he added, anger rising in his voice.

Farmers like Mallikarjunappa, from far away districts of Karnataka, arrived in Bengaluru a day before the parade. But farmers from Mandya, Ramanagara, Tumkur and other nearby districts started assembling on the outskirts of Bengaluru city at 9 a.m. on January 26 in tractors, cars and buses. They were to reach Freedom Park in Gandhi Nagar area in central Bengaluru, at around noon, and join the protest supporting the farmers’ tractor parade in Delhi. The Republic Day parade in the national capital was organised by the farmers protesting against the three new farm laws at Delhi’s borders since November 26. 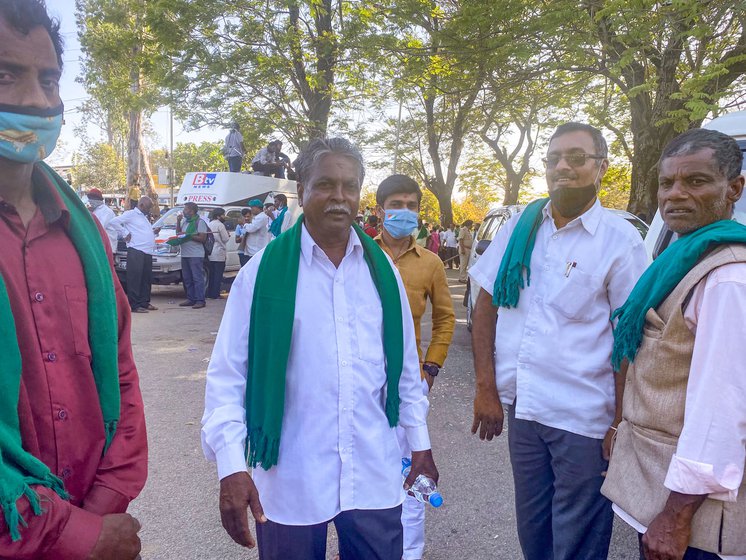 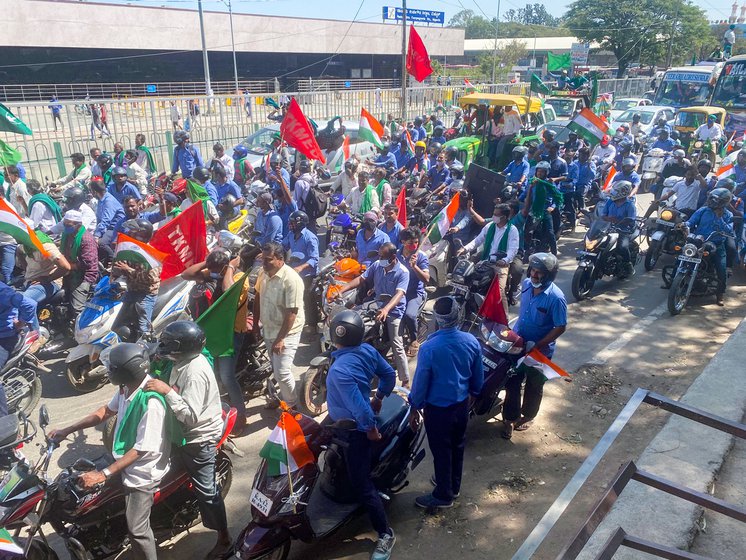 Left: D. Mallikarjunappa (centre), a farmer from Shivamogga. Right: Groups from across Karnataka reached Bengaluru for the protest rally

The laws that the farmers are protesting against are: The Farmers’ Produce Trade and Commerce (Promotion and Facilitation) Act, 2020 ; The Farmers (Empowerment and Protection) Agreement on Price Assurance and Farm Services Act, 2020 ; and The Essential Commodities (Amendment) Act, 2020 . They were first passed as ordinances on June 5, 2020, then introduced as farm bills in Parliament on September 14 and hastened into Acts by the present government on the 20th of that month.

The farmers see these laws as devastating to their livelihoods because they will expand the space for large corporates to have even greater power over farmers and farming. They also undermine the main forms of support to the cultivator, including the MSP, APMCs, state procurement and more. The laws have also been criticised as affecting every Indian as they disable the right to legal recourse of all citizens, undermining Article 32 of the Indian Constitution.

T.C. Vasantha joined the protestors at Bidadi town near Bengaluru. She and her sister, Putta Channamma, both farmers, came from Maddur taluk in Mandya district to participate in the protest. In K.M. Doddi, their village, Vasantha and her husband, K.B. Ningegowda, cultivate paddy, ragi and jowar on two acres of land. Their family of four – they have a 23-year-old son, a nursing student, and a 19-year-old daughter studying social work – mainly depends on their income from farming. Vasantha and her husband also take up MGNREGA work for 100 days in a year.

“The new farm laws will only benefit companies, just like the Land Act,” said Vasantha, referring to the Karnataka Land Reforms (Amendment) Act, 2020, which removed restrictions on non-farmers from buying and selling agricultural land. Fearing a corporate takeover of farmlands, farmers in Karnataka have been demanding that the state government take back the law.

“They [government] keep saying farmers are annadaata [food-providers], but they keep harassing us. Both [Prime Minister] Modi and [Chief Minister] Yediyurappa are torturing farmers. Yediyurappa amended the Land Act here. He should drop it and make a promise to the farmers. Hundreds are coming in their tractors today, and we aren’t scared,” said Vasantha. 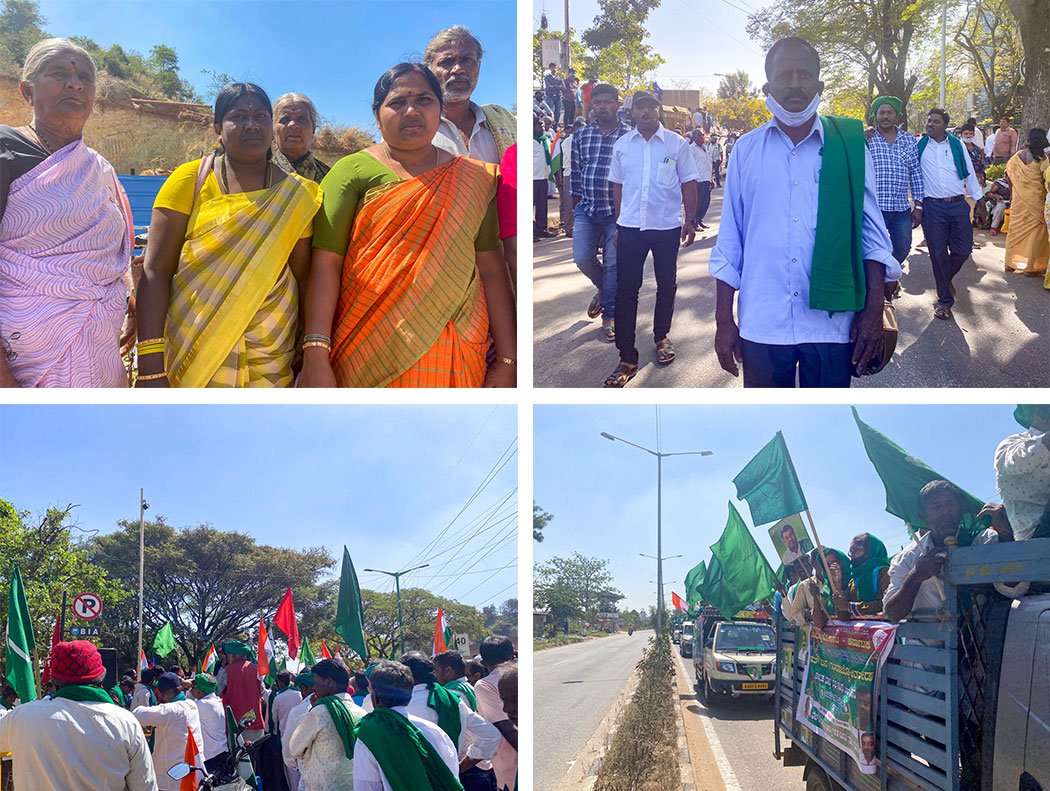 Karnataka’s farmers have been protesting longer than the farmers of Punjab and Haryana, said Badagalpura Nagendra, a leader of the Karnataka Rajya Raitha Sangha (KRRS), a farmers’ organisation. “We first started protesting in May 2020 against the Land Act, and we have been raising our voice against the three new farm laws brought in by the central government.” In Bengaluru, the KRRS was one of the main organisers of the rally on Republic Day. The organisation had planned to bring in 2,000 tractors from across the state. “But the police only agreed to allow 125,” said the farm leader.

The new farm laws will make it more difficult for farmers to earn an income, said R.S. Amaresh, a 65-year-old farmer from Renukapura village in Challakere taluk of Chitradurga district. “It is very difficult to survive as a farmer. There is no value for our crop. We have given up hope on agriculture. If it continues like this, a day will come when there will be no farmer.”

Amaresh didn’t want his children to become farmers, so he made sure they took up other occupations. “I have educated both my children so they won’t have to depend on farming. Our production cost is very high. Three labourers work in my fields, and I pay each Rs. 500 [per day]. My income is never sufficient,” he said. His 28-year-old son is a student of chartered accountancy and his 20-year-old daughter is doing her MSc.

At Byramangala Cross in Bidadi, Gajendra Rao was one of the first protestors to arrive on January 26. Gajendra isn’t a farmer. He is a cab driver and an activist associated with Karnataka Janashakti, a rights group in the state.“I’m here at the protest to fight for my food,” he said. “The government stores grains with the FCI [Food Corporation of India] now. This system will change slowly. We are going in that direction. Food prices will definitely go up as the system will be controlled by the corporates and not the government. I have every right to protest,” he said. 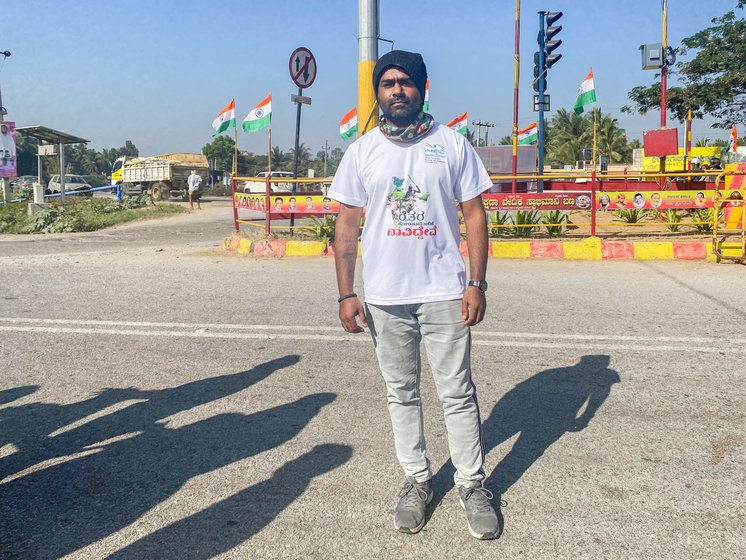 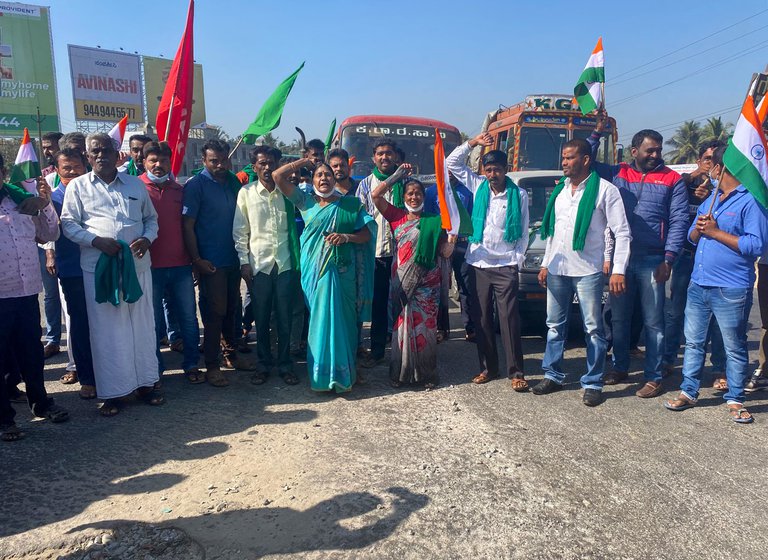 Gajendra’s grandfather owned a farm in Udupi district. “But we lost it because of a family dispute. My father came to Bengaluru around 40 years ago and started a restaurant. I drive cabs in the city now,” he said.

All the three farm laws will impact farmers across India, added Nagendra, the KRRS leader. “There will be an impact on the MSP in Karnataka also. There were some restrictions on procurement in [the Karnataka] APMC Act of 1966. The new Act will only promote private markets and companies. The farm laws are actually against the people of rural India.”

The laws will make the farmers’ situation more complicated, believes Amaresh. “The government should look at our production costs and allow a margin as profit, and accordingly fix the MSP. They are harming farmers by bringing these laws. The large companies will use their tactics and pay us even less,” he said.

But Vasantha is determined not to let that happen. “For the hard work we put in, we should get 50,000 to a lakh of rupees for each acre, but we are not getting anything,” she said, and added: “Not just one month, we will fight for one year if needed.”

Tamanna Naseer is a freelance journalist based in Bengaluru.

Other stories by Tamanna Naseer