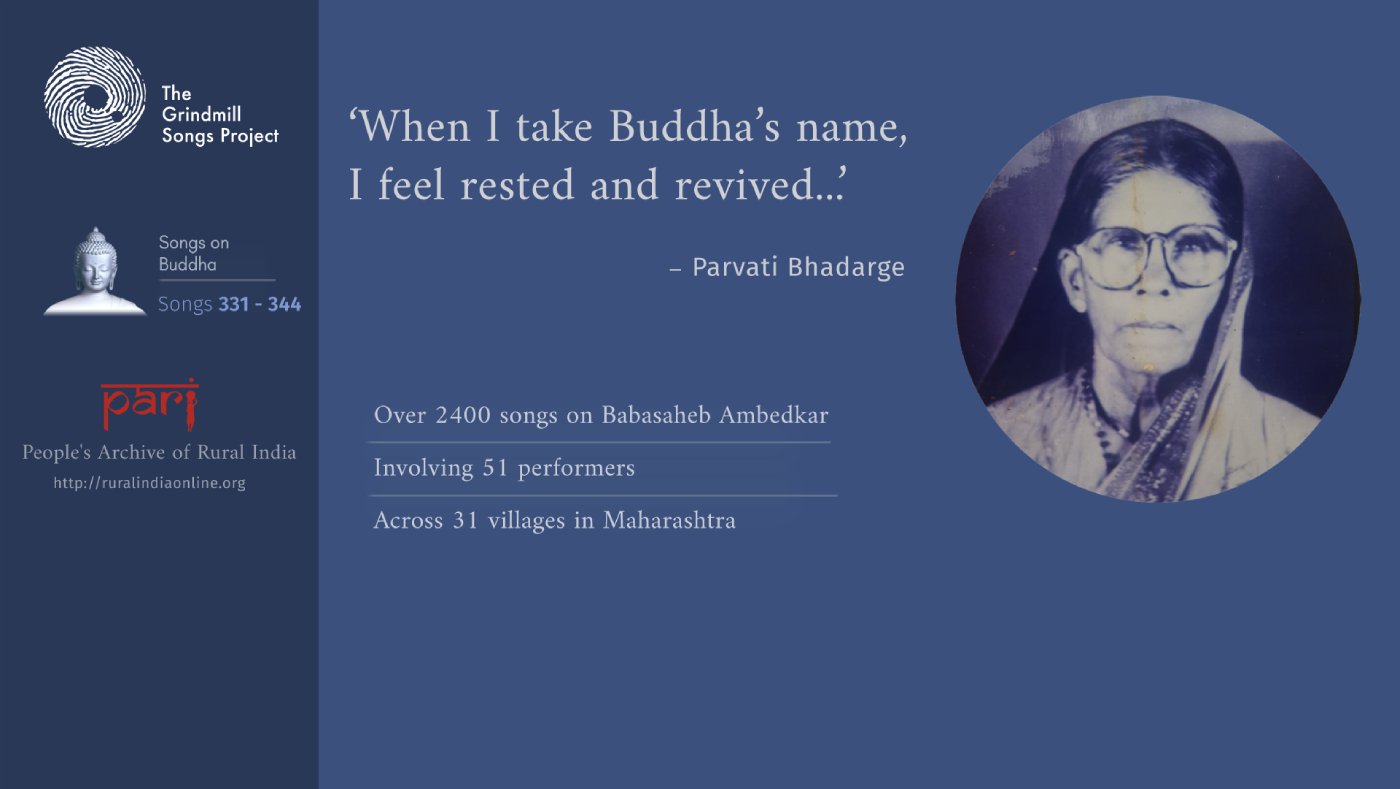 A billion salutations to Gautam Buddha

Two mothers and their daughters, from Majalgaon in Beed district, sing in devotion to Gautam Buddha. Their songs highlight his presence in people's daily lives, and how he leads his followers through his teachings

It is Buddha Purnima today, May 26, but there haven't been any public festivities to mark the birth of Gautam Buddha this year. “Now with the corona everywhere, we can’t have big celebrations for anything,” says 75-year-old Radha Borhade from Savargaon village in Maharashtra’s Beed district.

“We will pray at home and make kheer as a special treat for the children.” The Covid-19 pandemic and lockdown prevented public celebrations of Buddha Purnima in 2020, and again this year, says Radhabai with some disappointment in her voice, speaking to me over the phone.

In April 2017, when the PARI team visited Beed’s Majalgaon taluka to meet singers of the Grindmill Songs Project (GSP), we were sent to Radhabai in Savargaon. The village is about 12 kilometres away from Majalgaon village, in the same taluka . Later, PARI published some of her songs, which had been recorded by the original GSP team. Her ovi presented in ‘ Even one lakh songs are not enough for our Bhimrao ,’ celebrate Dr. Babasaheb Ambedkar and the importance he gave to education, unity and self-respect.

In ‘ Songs of Majalgaon, memories of Mhow ,’ Radhabai and others, who belong to the Nau Bauddha community (formerly Dalits), express gratitude to Dr. Ambedkar for the new identity his Navayana Buddhism gave them to counter caste-based oppression. In ‘ Songs of gratitude, chants of celebration ,’ Radhabai sings about Buddha’s teachings and how Buddhism emerged for the welfare of Dalits and to remove the stigma of untouchability.

When we visited Majalgaon, it was to meet the ovi singers Kamal Salve (Radhabai’s daughter) and Rangu Potbhare. But they were away visiting relatives. We could not meet Parvati Bhadarge, Rangubai’s mother, as she had died a few years ago. 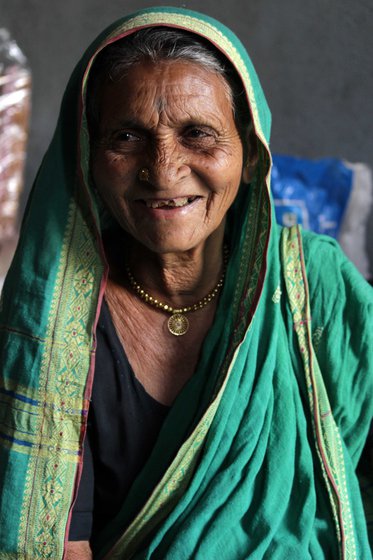 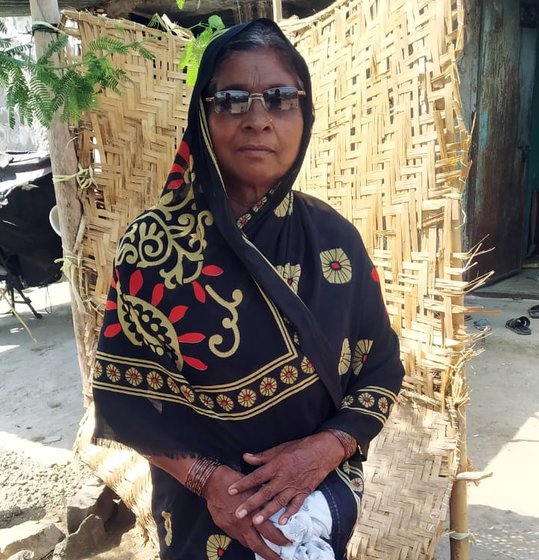 Kamalbai, in her 60s now and living in Bhatwadgaon village, about seven kilometres from Savargaon, tells me, “Yes, I sang some of the grindmill songs about Buddha many years ago, but I don’t remember much now. My mother knows them all.”

This instalment of Grindmill Songs Project, brings together two sets of ovi . The first has five songs of devotion to the Buddha, sung by Radhabai, Kamalbai and Rangubai. In the second set, Parvatibai sings nine couplets dedicated to the Buddha. The songs explain his presence in the daily lives of people, from the time one wakes in the morning. The original PARI GSP team had recorded all these songs in Majalgaon in 1996.

In the first group of couplets, presented by the three singers mentioned above, the narrator says that she dedicates her life to Buddhism. She surrenders herself to the three jewels of Buddhism – Buddha, Dhamma (Buddha’s teachings) and Sangha (community of Buddha’s followers). She vows to live honourably and follow the principles of panchasheel , Buddha’s five ethical precepts, which teach about not harming others.

The narrator also promises to adhere to ashtasheel , the Eightfold Path of good conduct, and read Mahamangala Gatha, a philosophical text that helps a person control their desire and anger. In the last song, the singer remembers the verses of Narasinh Gatha, and offers a “billion salutations” to Lord Buddha.


My first ovi , I dedicate to Bhagwan Buddha
I will surrender myself to the Buddha, Dhamma, Sangha

My second ovi , I surrender to the Buddha’s panchasheel and trisharan
Until my last breath, I will guard my honour and good conduct

My fourth ovi is for the Mahamangala Gatha
I will purify the mind, and free myself from desire and anger 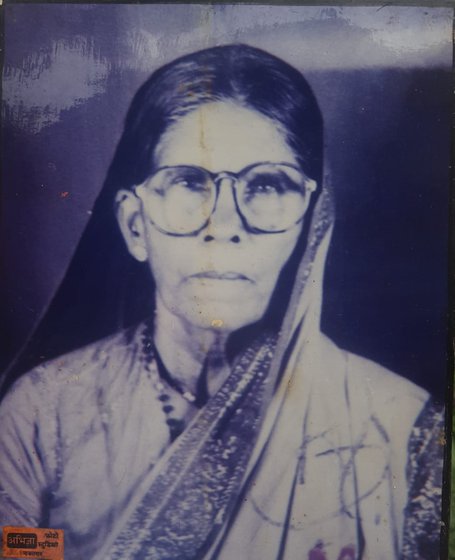 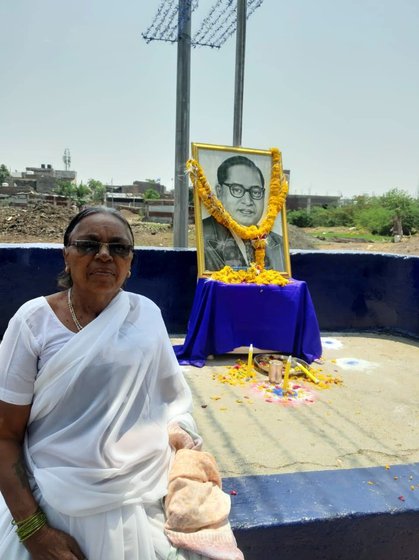 Parvati Bhadarge, who died about 10 years ago, sang the second group of songs presented here. She was fond of singing jatyavachya ovya (grindmill songs), says her daughter Rangubai, in her 70s now. “She used to tell me, ‘You should also sing with me, it is good exercise for your throat and you will always remember the songs’.”

“But I used the grindmill for only some years after marriage, to make jowar or wheat flour,” adds Rangubai, talking over the phone. Mechanised mills came to Majalgaon about 25 years ago and changed the practice of grinding at home, and the singing gradually stopped.

The first of these nine ovi refers to the time when the singer begins her day at dawn, being led by Buddha, the son of an emperor. The couplet implies that people have moved from darkness into light, by holding his hand. In the songs that follow, the singer tells us that Buddha’s name and his teachings bring sweetness in their lives; they make her feel rested and revive her.

When she sweeps the yard in the morning, the narrator experiences the presence of Gautam Buddha. And while sprinkling water and milk to settle the dust in the yard, she feels as if she’s his sister or a niece. Accepting Buddhism, she says, is like living in Buddha’s home.

Listen to the nine ovi sung by Parvati Bhadarge


Early at dawn, I hold Gautam Buddha’s fingers
He was born to an emperor

Early in the morning, you should first take Buddha’s name
And only then step on Mother Earth

The name, Buddha Dhamma, is like a lump of sugar
When I take Buddha’s name, I feel rested and revived

The name of Buddha Bhagwanta is like a lump of sugar
On taking Buddha’s name, my tongue tastes sweet

O woman, early at dawn, I sweep the courtyard standing
Along with my husband I see Gautam Buddha

O woman, early at dawn, I sweep the courtyard with ease
Along with my husband I see Gautam Buddha

Occupations : Radha Borhade worked as a farm labourer; she runs a small grocery shop in Savargaon now. Kamal Salve is a homemaker. Rangu Potbhare worked on her family farm for some years. Parvati Bhadarge was a farmer and farm labourer