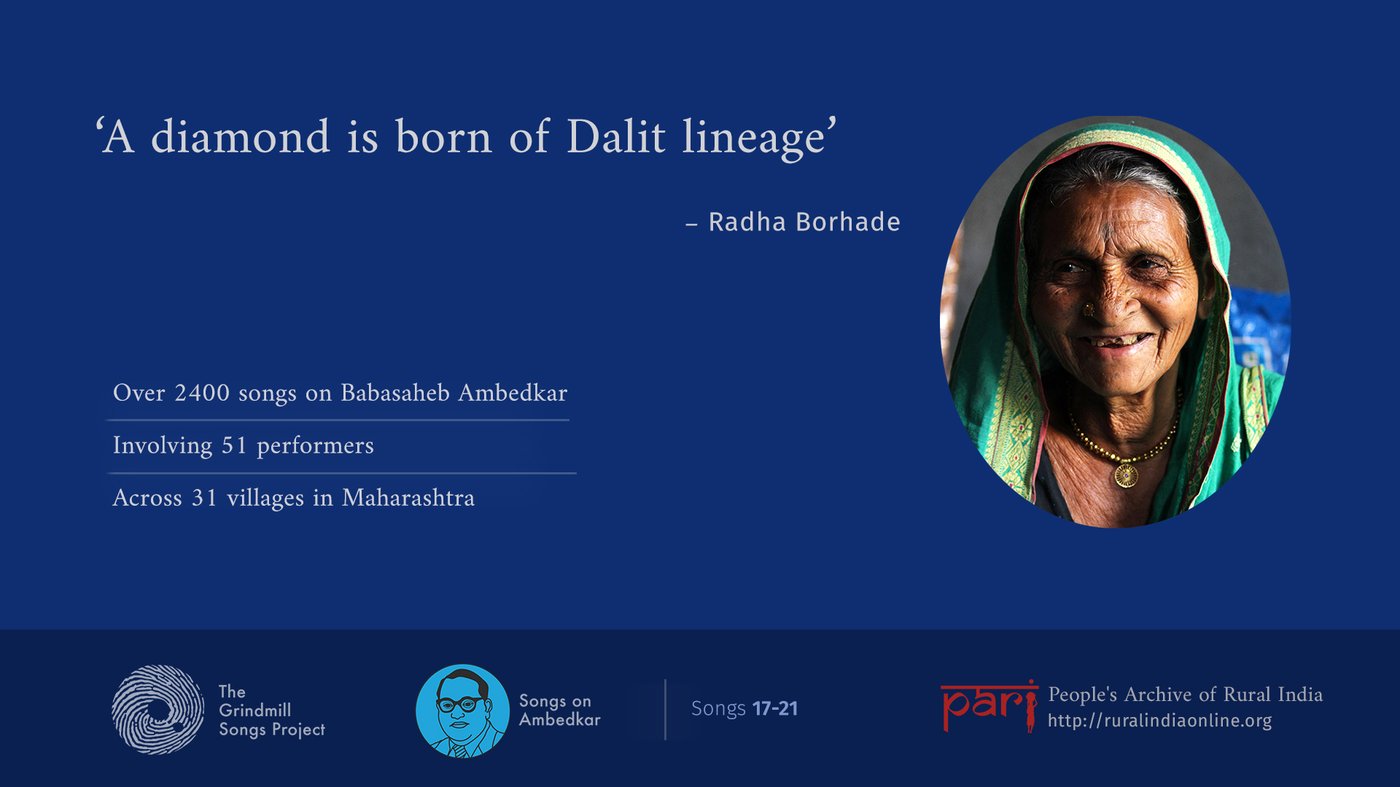 Songs of gratitude, chants of celebration

For the birth anniversary of Babasaheb Ambedkar on April 14, and as a part of PARI’s Grindmill Songs Project, this month we will feature couplets on Dr. Ambedkar and caste issues. In the first of this series, Radhabai Borhade of Savargaon sings five ovi on Buddha, Bhimrao, dhamma, sangha and Ramabai

Exactly 21 years separate the audio and video clips featured here. The ovi that Radha Borhade sings were recorded on April 2, 1996.  Coincidentally on the same date, April 2 this year, we visited her again and filmed her while singing.

Radhabai, now around 70, could not remember the songs she sang two decades ago, but the melodies came back to her when we recited a few couplets. She was sure she would remember more if she read the transcripts of her songs from 1996, and says she will then sing them all again. (She had learned to read and write at an adult literacy class in the village).

Watch video: Radhabai sings a grindmill song recollected from the past

In 1997, Radhabai lived in Bhim Nagar basti of Majalgaon village. She now lives in Savargaon village in the same taluka in Beed district, and runs a small grocery shop. She has four daughters; all of them are married.

In Majalgaon, she lived with her husband Khandu Borhade. They worked as agricultural labourers; Radhabai’s task was to do the weeding. At times, she would winnow or clean grain in the Mondha market, sometimes she worked as a cleaner and sweeper in the larger village houses.

But as she and her husband aged, work became scarce. So, 12 years ago, they moved to Savargaon to live with Khandu’s brother and his family, and set up a small grocery shop. Both the brothers have since died and Radhabai lives with her sister-in-law and her son, Rajubai and Madhukar.

Bhim Nagar hamlet in Majalgaon, a taluka village, has a predominantly Dalit population. For the Grindmill Songs Project, it has been a wellspring of ovi about Babasaheb Ambedkar, the revered national leader and statesman, voice of the oppressed and the marginalised, and architect of India’s Constitution. To observe his birth anniversary on April 14, PARI will feature grindmill songs about Dr. Ambedkar and caste issues throughout this month. 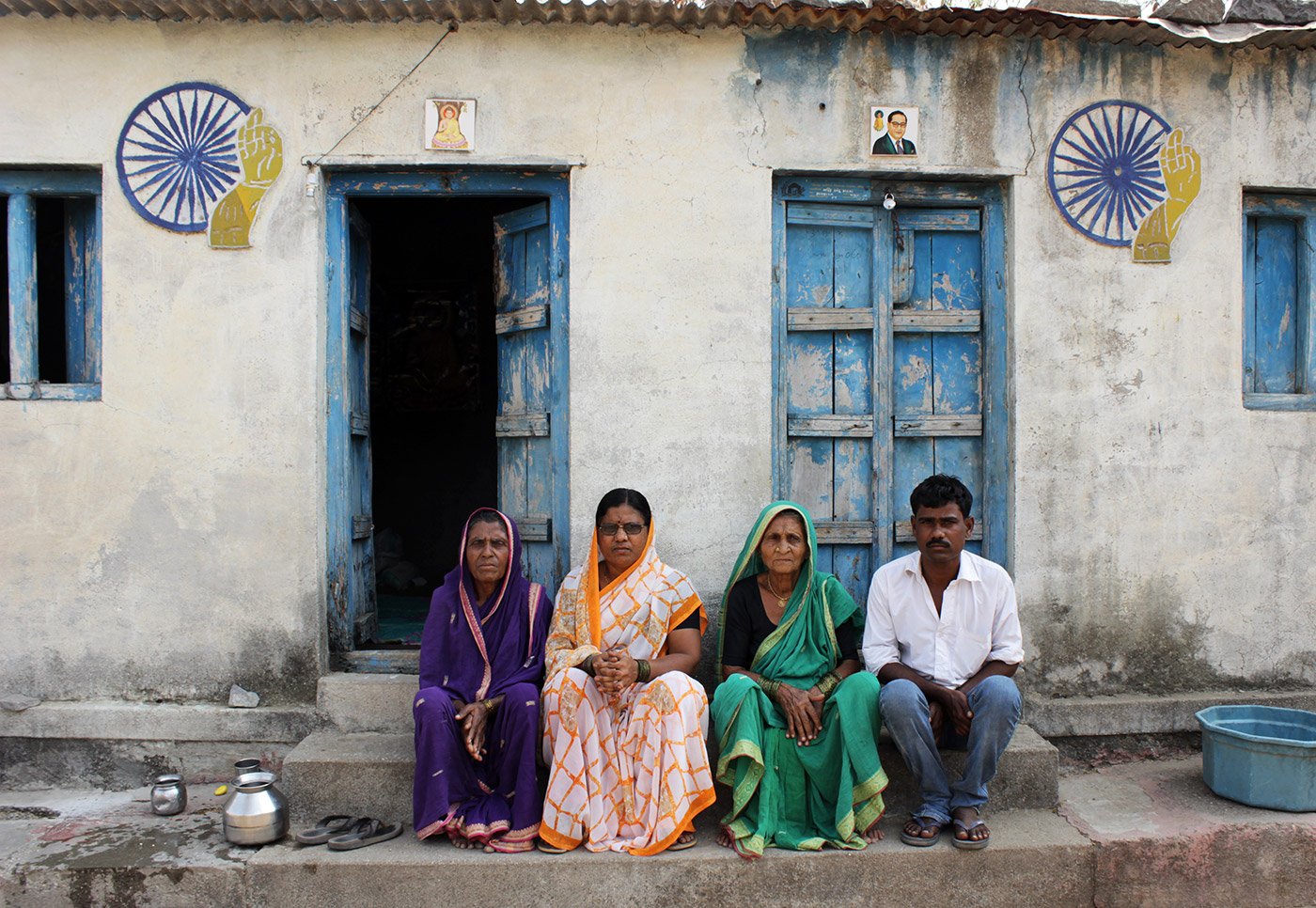 Sitting outside their home in Savargaon village: Radhabai with her sister in law Rajubai (first from left), her daughter Lalitabai Khalge , and Rajubai's son Madhukar

In the first of this series, Radha Borhade sings five couplets, each on a different theme. The first ovi is dedicated to Lord Buddha, who, the song tells us, brought Buddhism into this world for the welfare of Dalits, to help them remove the stigma of untouchability.

The second ovi is for Bhimrao Ambedkar, who inspired Dalits and guided them in ways to counter caste-based oppression.

The third couplet is dedicated to the Buddhist religion and way of life. The singer tells us that this dhamma (religion or dharma) will protect and safeguard the world.

In the fourth verse, the singer pays homage to the sangha , the community of Buddhist monks. She vows to follow the principles of panchsheel , the five basic elements of good conduct that can prevent causing harm to others.

Radha Borhade dedicates the fifth ovi to Ramabai Ambedkar. She worships  Bhimrao Ambedkar’s wife, and says she was a revered mother who lived among the Dalits.

My fifth verse is to worship Ramabai
Respected,  blessed mother, who lived among us 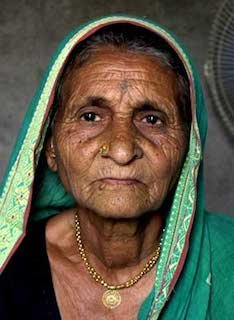 Date: These details were recorded on April 2, 1996