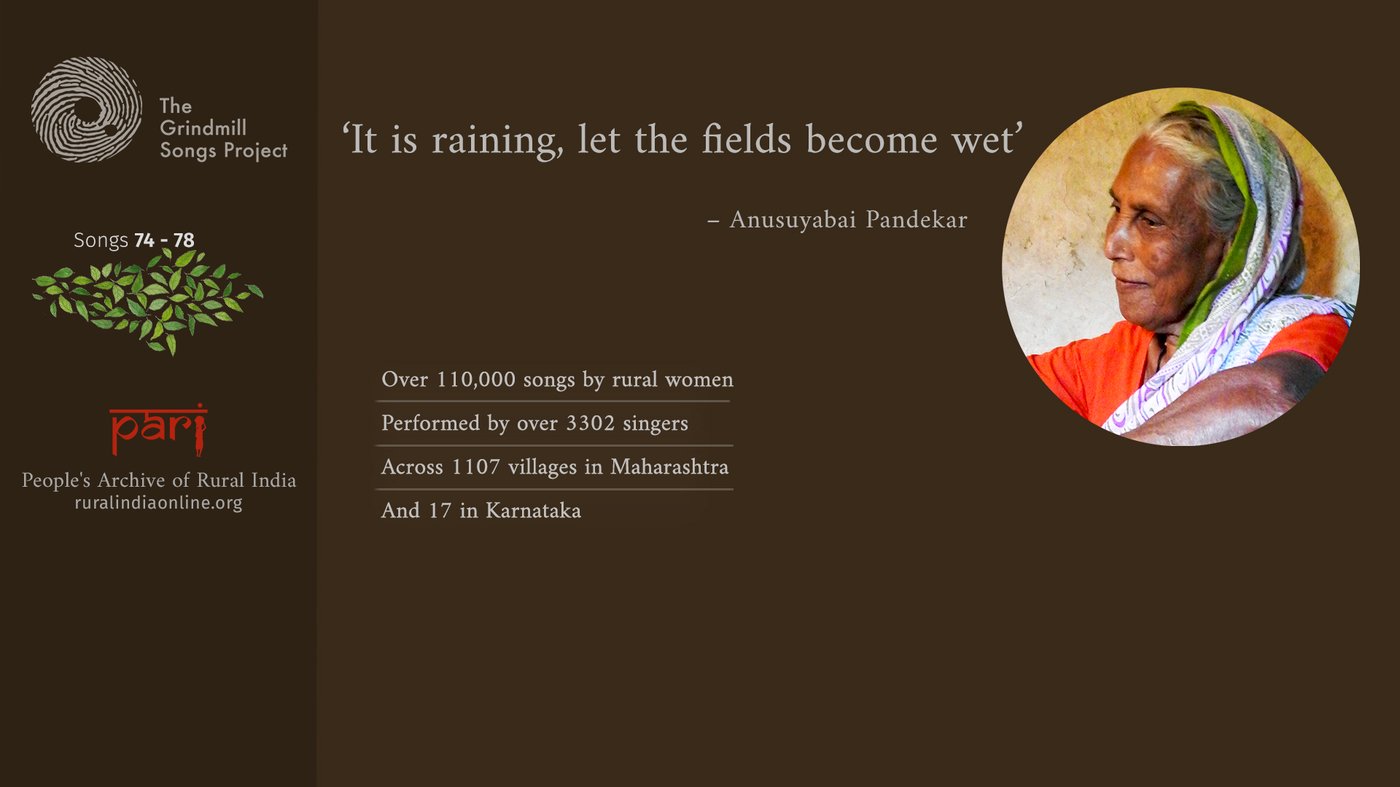 The extraordinary colour of rain

Rain songs from the field, as recalled and sung by Anusuyabai Pandekar and her daughter-in-law Manda from Lawarde village in Pune district. Recorded in April 2017 for this edition of the Grindmill Songs Project

Anusuyabai smiled when we reminded her about the many ovi she sang more than 20 years ago, and said, “Oh those days… it is all changed now.” She wiped her moist eyes with her saree. She was younger then and is now 70 and a widow. The team that started the Grindmill Songs Project had visited Lawarde, her village in Mulshi taluka of Pune district, on January 6, 1996, and recorded ovi (couplets) sung by women, including Anusuyabai.

That database of grindmill songs contains over 110,000 ovi. The project is now hosted by PARI, and revisiting the villages to meet the singers, take photographs and record videos is a part of the continuing project.

In the database, 45 couplets are attributed to Anusuyabai Pandekar. Only nine of these, on Sita’s life as narrated in the epic Ramayana , were audio recorded by the Grindmill Songs Project team in 1996. There are other verses with transcripts, but no audio clips covering such topics as a mother’s concern for her son, women’s lives, labour and social identity, Lord Krishna and Maruti. PARI hopes to record and publish audio clips for these too, over time.

We visited Lawarde on April 30, 2017, and recorded a video of rain songs by Anusuyabai.  Her daughter-in-law Manda joined in and led the singing – she also sings at weddings in the village, including during the haldi ceremony, for which turmeric is ground at the grindmill while singing ovi . 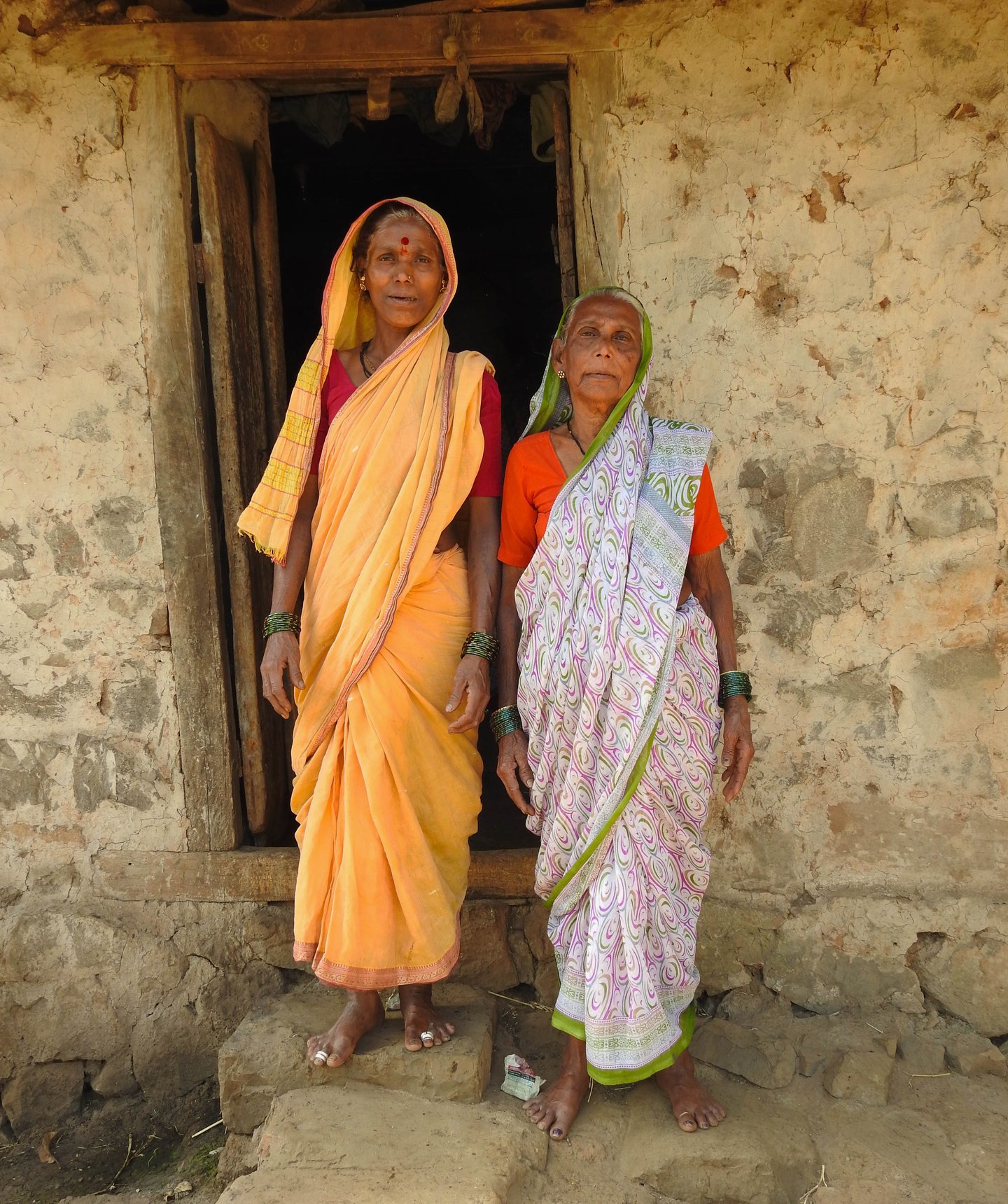 The video contains five couplets on rain, but with an interesting additional four lines repeated after each line towards the end. This four-line verse is sung as the galaa [tune] with a distinct rhythm that contains recurring words like ‘ vali, vali’ (wet) and ‘ nyara, nyara’ (appealing/ enchanting).

Manda and Anusuyabai begin with a popular verse sung by 97 women in the grindmills database – an ovi that compares a brother and sister to the Mriga and Rohini nakshatras (constellations). (Read more about this ovi in The farmer and the rain song ).

In the second verse, they say that the heavy rainfall is making the soil wet; the women carry baskets of bhakri made of millet flour for their men working in the fields.

In the third ovi , the singer says she wants the rain to make the fields wet, and sings that the farmer stands behind the plough ready to sow. The farmer is implicitly compared to a man standing by to marry his bride. Sowing, it implies, is as auspicious as a marriage.

In the fourth song, she tells us that her son is cultivating the field and sowing wheat with the drill-plough. In the fifth verse, the ploughman is working under the jasmine tree while pre-monsoon showers are beating down on the fields.

Four lines are repeated after each line of the fourth and fifth song. In this recurring verse, the singers narrate an event that occurs every year in Maharashtra in June/July. When it rains, the pathways become wet and the palkhi (palanquin) arrives. It contains the silver clogs of the poet-saints Dnyaneshwar and Tukaram, symbolising them in their absence. Devotees worship these sandals, which are taken on an annual journey, the vari (pilgrimage) to Pandharpur in Maharashtra. As the palanquins pass through villages and towns, people gather around to offer turmeric and vermillion.

There is a potent sense of piety and divinity in this extraordinary annual event – these recurring lines of the verse speak of a unique atmosphere that acquires a special colour. And while the vari is in progress (with hundreds of thousands of people walking towards Pandharpur), Lord Vitthal, the song says, is dressed in a brocade wrap that suits him well (and is ready to welcome the devotees).

Sister’s cradle rocks before the brother’s

It is raining heavily, let the soil become wet
Women are going to the field, with baskets of bhakri

It is raining, let the fields become wet
The farmer stands behind and works with the drill-plough

It has rained, it is raining continuously for long
My son is cultivating the field, sowing wheat with the drill-plough

The pre-monsoon rain is beating down on the fields
Under the jasmine tree, the ploughman is working with the drill-plough

Note: God refers to Lord Vitthal in Pandhapur. ‘Enchanting colour’ refers to the atmosphere created by the combination of all that is mentioned in the verse 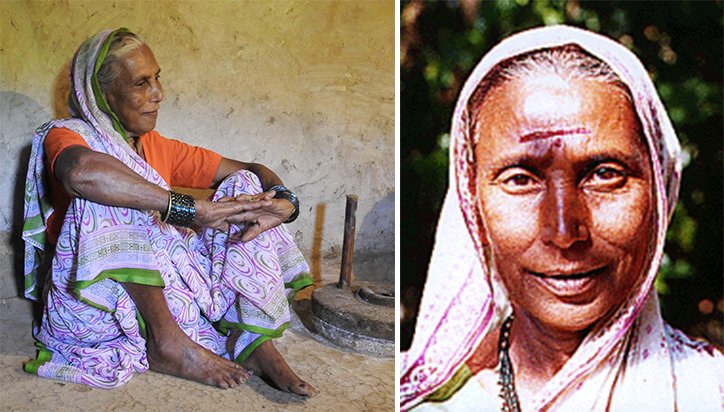 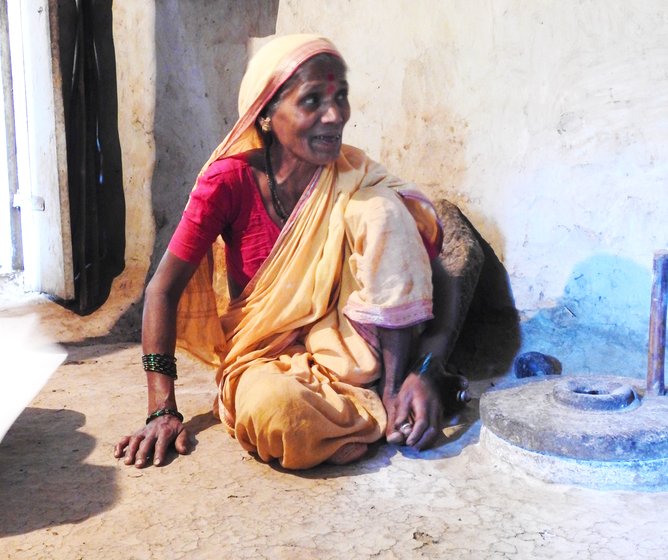 Date: The information about Anusuya Pandekar was first recorded on January 6, 1996.  The video and photographs of Anusuya and Manda Pandekar were shot on April 30, 2017.