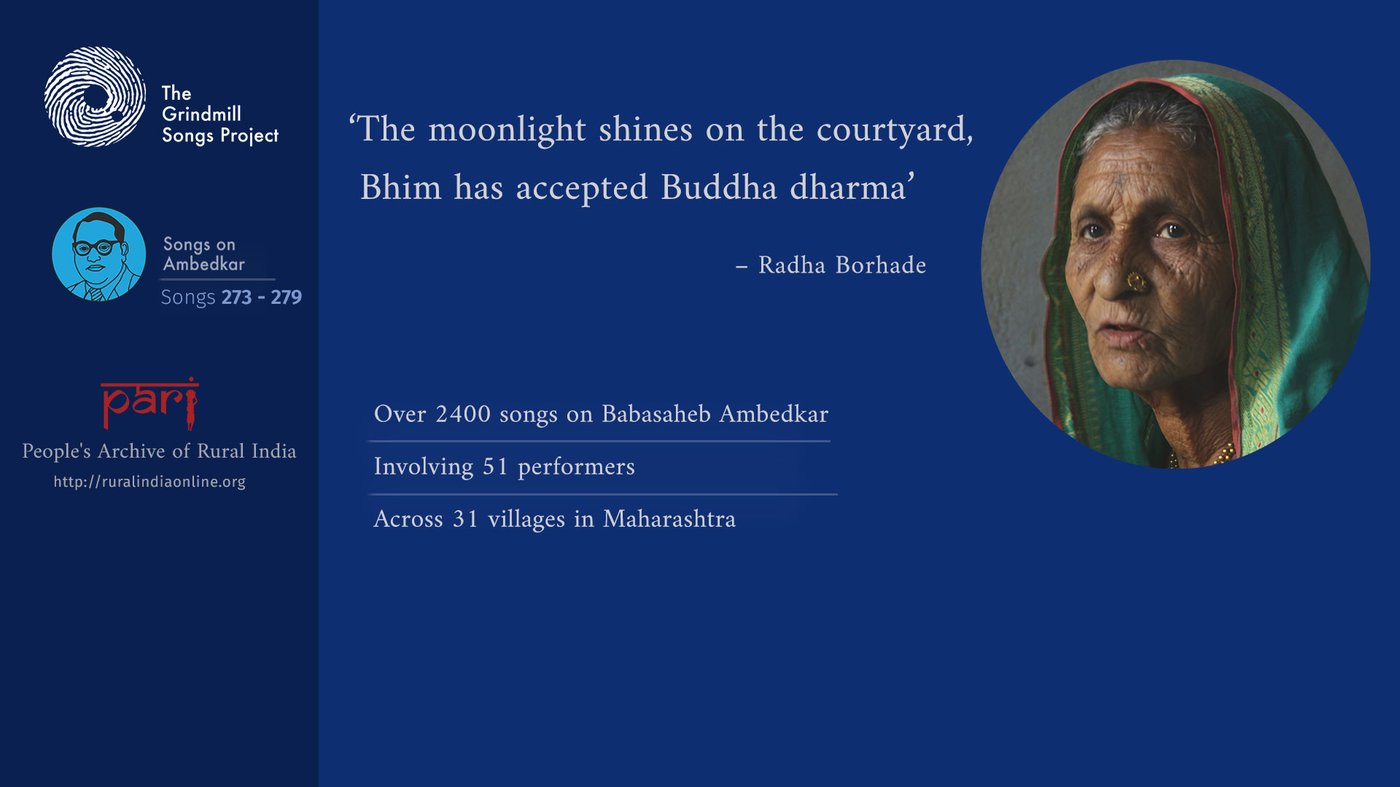 Marking a different milestone on Dussehra

In 1956, on Dussehra day, Dr. Ambedkar publicly rejected the Hindu faith. Radhabai Borhade and Walhabai Takankhar sing about this landmark event and of Buddha’s renunciation, for the Grindmill Songs Project

“I am very interested in the story of Babasaheb Ambedkar and Buddhist scriptures,” says Radhabai, a farm labourer for many years who ran a small grocery shop when we met her in April 2017.

We were visiting Majalgaon village in Beed district to meet singers who had contributed ovi to the grindmill songs database over two decades ago. (See Songs of Majalgaon, memories of Mhow .) Radhabai lived in Bhim Nagar, the village’s Dalit hamlet, but just a few months before our visit she had moved to nearby Savargaon in Majalgaon taluka to live with her sister-in-law after her husband died.

Walhabai Takankhar, a homemaker, told us  “My brother was very influenced by Babasaheb Ambedkar’s teachings and he works for the Dalit cause…”

Radhabai's  husband “was not interested in all this,” but, Radhabai says, “he  encouraged me to travel. So  I went to Aurangabad to see the [Buddhist] sculptures at Ajanta and Ellora caves, to Babasaheb’s birthplace in Mhow, and to Deeksha Bhoomi in Nagpur.”

Every year, on Vijayadashami, the last day of the festival of Dussehra, tens of thousands of Dalits from across the country travel to Deeksha Bhoomi in Nagpur. The festival marks the end of the nine days of Navratri and the 10th day celebrates the victory of good over evil, when Goddess Durga triumphs over the demon Mahishasur. In the Mahabharata , it is said that Arjuna defeated the Kauravas on this day. In the Ramayana , it was on this day that Lord Rama killed Ravana. 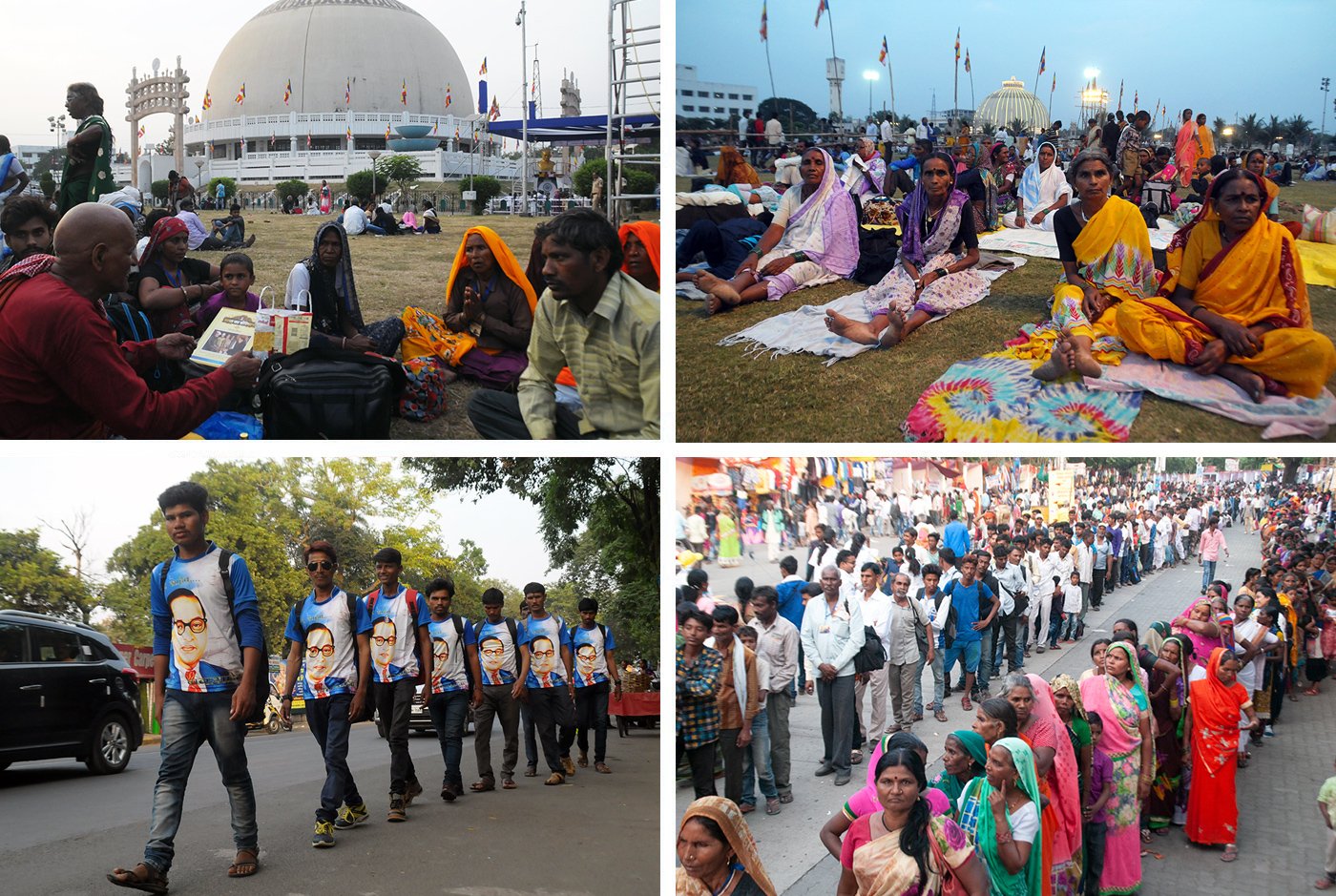 On Dussehra every year, tens of thousands of Dalits from across the country travel to Deeksha Bhoomi in Nagpur to commemorate the day Dr. Ambedkar rejected Hinduism and converted to Buddhism. The day marks a fight against social evil, a symbolic assertion of justice

But Dalits gather in Nagpur to remember another significant victory – not a mythological war but a milestone in Indian history.  In Nagpur, on October 14, 1956, Babasaheb Ambedkar and lakhs of others converted to Buddhism. It’s a day for the community to remember Dr. Ambedkar’s fight against the discrimination of Dalits.

In Annihilation of Caste (1936), Babasaheb said, “Caste is the natural outcome of certain religious beliefs which have the sanction of the s hastras [Hindu scriptures].”

On the breaking away from these beliefs, he said: “What matters is how the shastras have been understood by the people. You must take the stand that Buddha took. You must take the stand which Guru Nanak took. You must not only discard the shastras , you must deny their authority, as did Buddha and Nanak. You must have the courage to tell the Hindus that what is wrong with them in their religion – the religion which has produced in them this notion of the sacredness of caste. Will you show that courage?”

Radhabai Borhade and Walhabai Takankhar sing seven ovi about the lives of Gautam Buddha and Dr. Ambedkar. The first two songs refer to Buddha’s renunciation of his palace, wealth and material life. In the first ovi , Radhabai sings of Gautam, who has gone into the forest even though there is a golden plough in his father Siddhudhana’s fields. In the second ovi , Buddha’s mother Mayavati says she is unhappy because her son has left his wife. 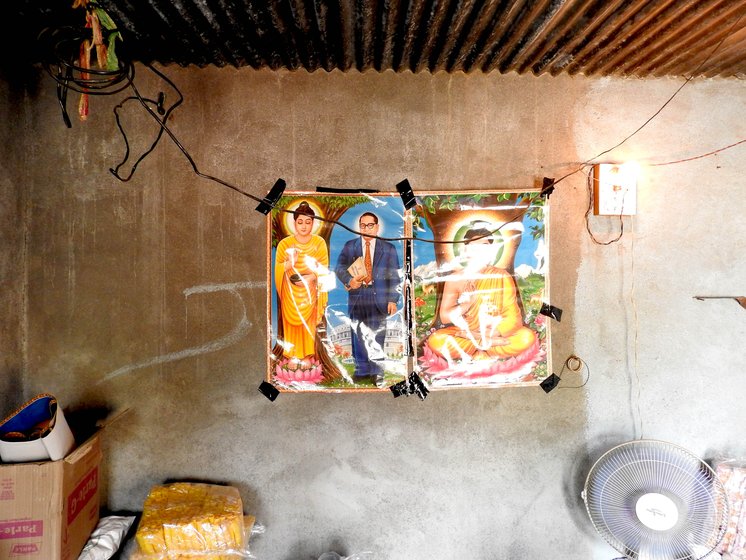 In Radhabai Borhade's home, posters of Buddha and Babasaheb speak of her reverence

Songs 3-7 are about Dr. Bhimrao Ambedkar and his fight against caste discrimination. In the third song, Radhabai sings of Bhim, who has accepted Buddha dharma or Buddhism. She compares his rejection of the Hindu faith and the caste system with lighting up the dark – it is a full moon night, she says, and the moonlight shines in the courtyard.

In the fourth ovi , the singers tell us that an armoured tank has arrived; it has a mirror. But Bhim is not afraid and he hoists the (symbolic) flag. This ovi has a deeper meaning: the tank symbolises Babasaheb’s convictions and values, the very basis of his struggle. These values, it is implied, have the strength to protect and preserve humanity. The mirror on the tank is a symbolic device that reflects the reality of caste discrimination. But Bhim – Dr. Ambedkar – is not afraid of anyone. He wins the intellectual battle and hoists the flag of victory. No one can stop him from winning this fight is the ovi ’s underlying message.

This same thought – fighting discrimination and breaking caste barriers – continues in the next three couplets. The fifth ovi tells us that a gun carriage has the reins ( kasra) of a bull and Bhimrao’s father-in-law ( sasra ) is a Brahmin. This refers to the fact that Bhimrao’s second wife, Savita, was born into a Brahmin family.

The singers address the sixth and seventh ovi to Savita Ambedkar – they sing of a curl in her hair and a ribbon in her plait. She marries a 'besotted' Bhimrao, a Dalit, instead of a man from her own caste. And he takes her to the capital city Delhi, where he works – seen as an act of privilege.

Collectively, these couplets speak of caste hierarchy and the demand for equality, and resonate with a people exploited and oppressed for centuries.

O woman, a golden plough lies in Siddhudhan’s fields
And Gautam [Buddha] has gone to the forest

Mother Mayavati says: I am not feeling happy today
O woman, Gautam Buddha has relinquished the company of his wife

Here comes the armoured tank, the tank has mirrors
Bhim is not scared of anyone, he does not hesitate from hoisting the flag

The gun carriage is here, it has reins of a bullock
A Brahmin is Bhim’s father-in-law

O Brahmin girl, you have a rag [ribbon] tied to your plait
Bhim is besotted with you, and took you to Delhi

O Brahmin’s daughter, you have a curl in your hair
Instead of a Brahmin man, you married Bhim 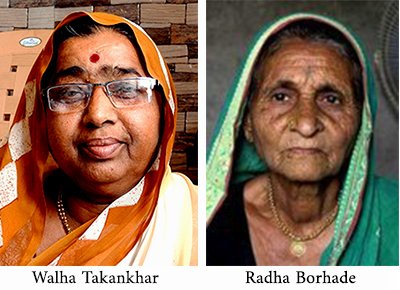