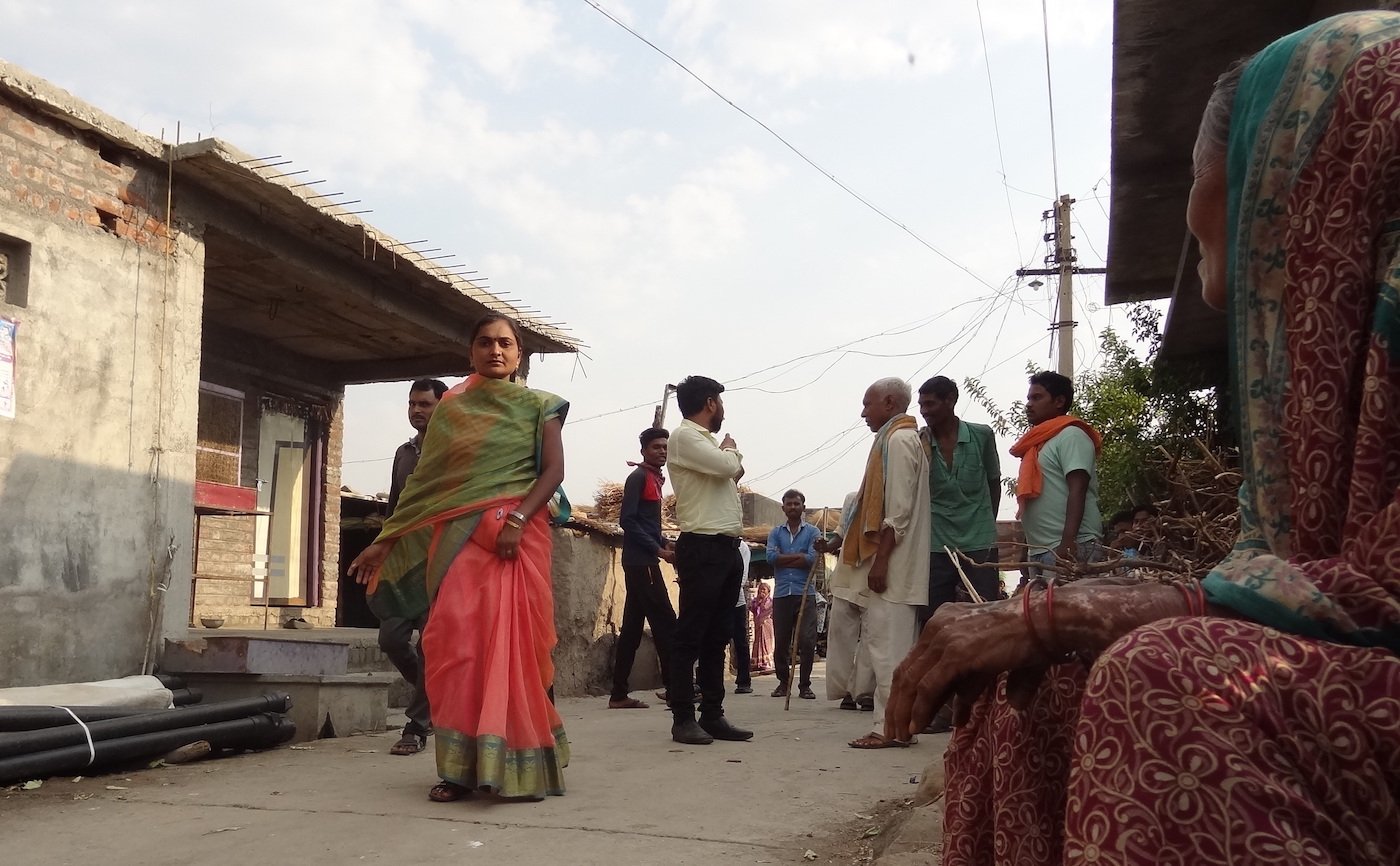 Vaishali Yede, a farm labourer and anganwadi worker, whose husband committed suicide in 2011, is contesting the 2019 Lok Sabha elections from eastern Maharashtra against political heavyweights

Vaishali Yede walks briskly through the lanes of her village, greeting people with a smile and urging them to back her. “ Mi tumchich mulgi aho [I am your daughter],” she tells them in the local Varhadi dialect, with folded hands.

She is pleased with the attention she’s getting, but her request – “ mahyavar laksh asudya ji ” [keep me in your prayers and thoughts]” – is also a plea to the people to not forget farm widows, and their emotional and financial trauma after their husbands’ suicides.

Once in a while, 28-year-old Vaishali bends down to touch the feet of elders. Shakes hands with young girls. And waves at women fetching water at a hand-pump. She then gets into a waiting car, one of the six-seven modest vehicles in her caravan, and leaves for the next village to continue canvassing in the blistering 42 degrees heat.

Vaishali is contesting the 2019 Lok Sabha elections from the Yavatmal-Washim constituency in eastern Maharashtra.  Around 17.5 lakh voters will cast their ballots here on April 11. Vaishali is the nominee of the Prahar Janshakti Paksha, a local political party led by Omprakash (Bachchu) Kadu, a 48-year-old Independent MLA from Achalpur in Amravati district. His party is slowly gaining popularity in Vidarbha and improving its footprint by focussing on the issues of farmers and farm labourers. 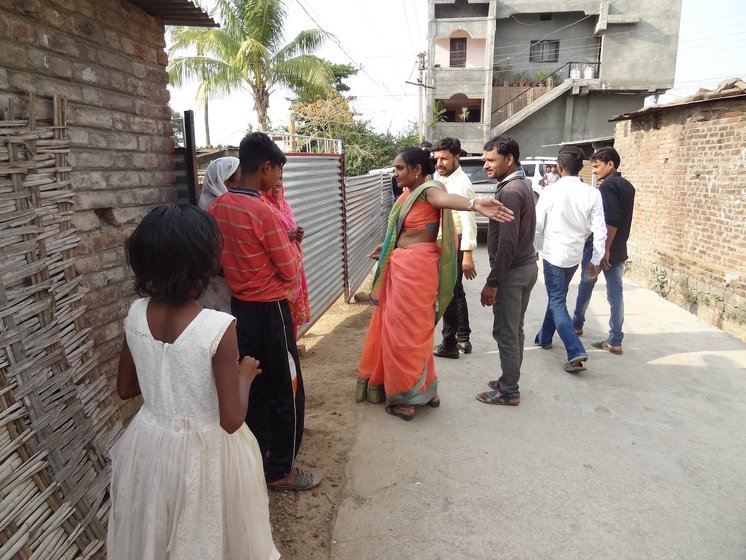 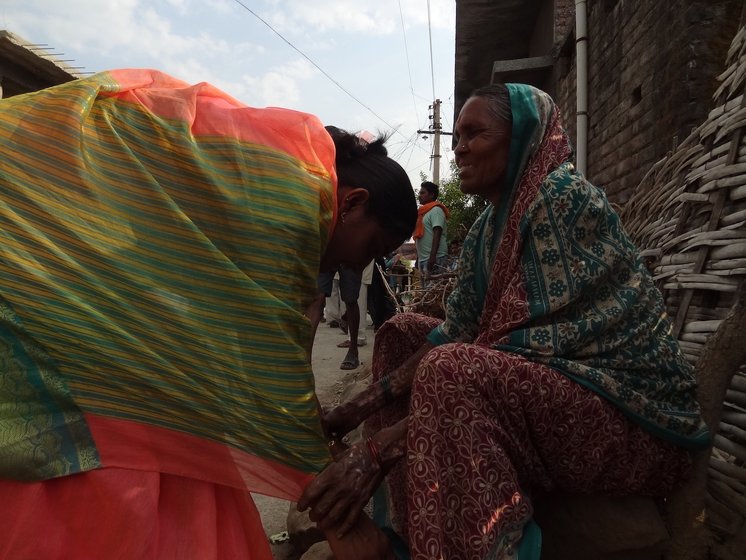 Vaishali, the nominee of the Prahar Janshakti Paksha, a local political party, is campaigning in Yavatmal-Washim, which will vote on April 11

For almost two decades, Yavatmal has been the epicentre of Vidarbha farm suicides in the wake of a deepening agrarian distress. Hundreds of cotton and soyabean farmers have committed suicide in this district due to growing indebtedness, declining incomes, and a stagnant rural economy, among other reasons.

“Today we did Ralegaon,” Vaishali says, “tomorrow we are off to Washim.” It’s impossible, she says, to visit the estimated  2,000 villages and towns of the constituency, so she’s holding public meetings at a few places.

Vaishali was barely 18 when she got married to Sudhakar Yede in 2009, and 20 when her husband died. He was a three-acre dryland farmer who mainly cultivated cotton and soyabean in Rajur, a village in Yavatmal’s Kalamb tehsil , around 20 kilometres from her own village, Dongarkharda, in the same tehsil. He killed himself on 2 October 2011. Vaishali was at her parent’s home. Her second child, Janhavi, was just born and her son Kunal was a year-and-a-half old. “The news came that evening that my husband had consumed poison and died,” she remembers. “He left us, just like that, without even thinking about me or our children.” What prompted him to kill himself isn’t clear, she says, he had loans, the crop that year had failed…

Watch video: ‘If I am elected, I will present the issues of the poor people and farmers in Parliament’

The tragedy went mostly unnoticed amid the scores of other stories of distress, suicide and sorrow in Yavatmal. Last year, Vaishali was asked to act in a path-breaking play called Terava (the 13th day ritual) written by noted Nagpur playwright and senior journalist Shyam Pethkar. He came across her through a pan-Vidarbha organisation that works with farm widows. The play asks –‘what would you tell your husband if he were to come to life today?’ – and the question evolves into a layered plot. Pethkar brings to life the stories of farm widows – all enacted by real farm widows from different parts of Vidarbha.

Then, in January 2019, Vaishali was invited to inaugurate a Yavatmal literary meet after the local organisers of the event retracted the invitation to author Nayantara Sahgal, who was originally scheduled to inaugurate the festival. This made her a recognisable name.

Yavatmal-Washim  is the only Lok Sabha seat for which the Prahar Janshakti Paksha  has fielded a candidate, says Kadu, who has a growing following in rural Vidarbha. “Farmers from all over the state are sending us donations for Vaishali tai ’s campaign,” he adds.

Kadu and his brigade have been leading her campaign, invoking farmers’ issues – from crops pricing to political neglect, and the devastating farm suicides. In 2017, his Prahar party had swept the municipal council polls in Pandharkaoda in south Yavatmal, winning 17 of the 19 seats, and sidelined the Bharatiya Janata Party as well as the Congress.

The other contestants are formidable: four-term Member of Parliament Bhavana Gawali of the Shiv Sena, and the deputy chairman of the Maharashtra Legislative Council, Manikrao Thakre, of the Congress

By fielding Vaishali, the party front is aiming to create space for itself in the village panchayats , nagar panchayats and z illa parishads in both Yavatmal and Washim. The number of votes Vaishali draws, the booths where she gets votes, will indicate if people are ready to support the party, and who they should field as candidates for local body polls.

“I did not want to do this,” says Vaihslai, “but when Bachchu bhau told us that the farmers’ suicides aren’t abating and that I must contest in the polls to raise the issues of farmers, I decided to take the plunge,” she says. “I am not into elections for politics, but for social work.”

In her speeches during the rallies and corner meetings, Vaishali has been appealing to farmers to elect her to Parliament so that she can raise their issues, such as fair prices for crops and fair wages to women farm labourers, as well as the concerns of farm widows and families. These concerns, she says include alcoholism in farming communities. So she wants like to ban liquor in Yavatmal. Prohibition, Vaishali says, is crucial if women are to be saved hardships and violence.  And among her top priorities, she adds, will be the rehabilitation of young girls from Adivasi communities who have been sexually exploited and abandoned by men (several such cases have been reported locally).

The other contestants are formidable: four-term Member of Parliament Bhavana Gawali of the Shiv Sena is seeking a re-election. She is challenged mainly by the deputy chairman of the Maharashtra Legislative Council, Manikrao Thakre, of the Congress party, who is also a former president of the Maharashtra Pradesh Congress Committee. 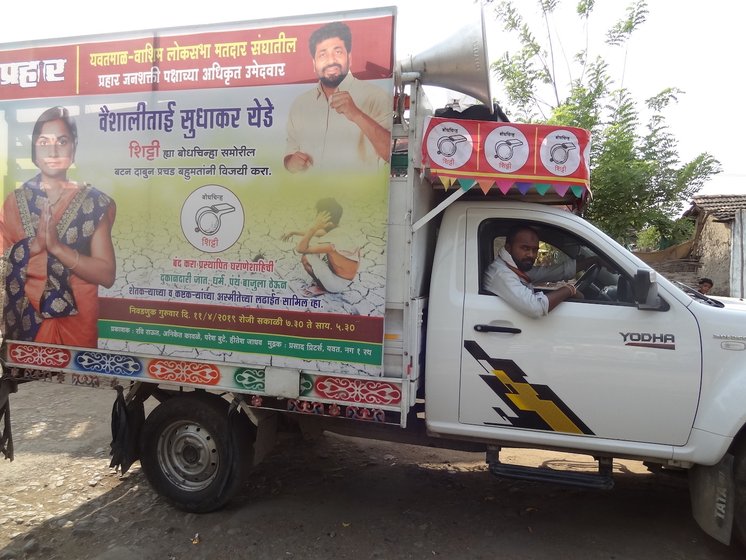 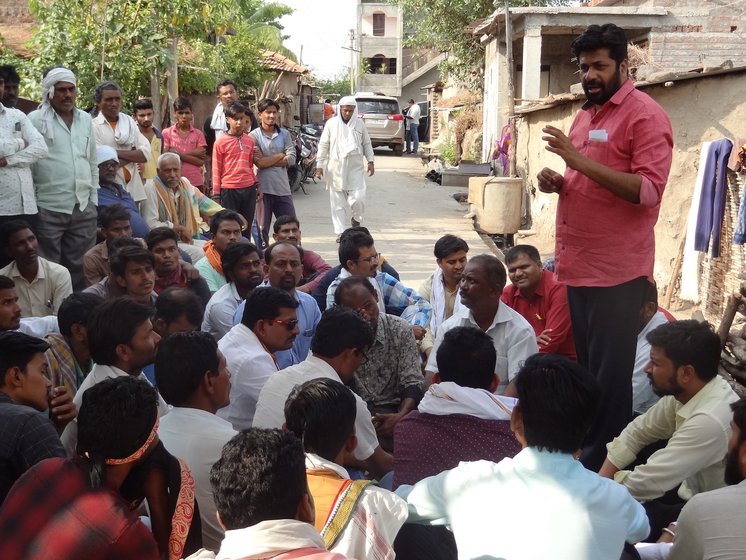 Omprakash (Bachchu) Kadu (right, addressing the crowd), an Independent MLA from Amravati, urged Vaishali to contest. His Paksha is gaining popularity in Vidarbha by focussing on agrarian issues

“You will elect these big leaders and they will forget you,” Kadu tells the assembled villagers during a brief halt in Dongarkharda, “but if you back your own daughter, she’ll work for you round the clock.”

Vaishali works as a farm labourer in the morning, an assistant at the Rajur village anganwadi in the afternoon, and in the evening stitches on her sewing machine for a little extra income. She earns a total of around Rs. 7,000-8,000 a month. “The last nine years have been full of struggle,” says her elder brother Sanjay, who’s her main support now.

Vaishali’s in-laws, the Yedes, are a large family in Rajur. About 50 houses in all, says her uncle-in-law Manik Yede. Vaishali’s parents' family is landless. Her father, Manikrao Dhote, is a mason and mother Chandrakala is a farm labourer. Sanjay and a younger brother Vinod are itinerant labourers. The Dhotes own a small decrepit house in Dongarkharda, partitioned in two halves – in one room Sanjay lives with his wife and a son, the other is for Vaishali’s parents, Vinod, and her now nine-year-old son. Vaishali and her daughter, who is in Class 1 at school, live with her mother-in-law Panchfula Sheshrao Yede in Rajur.

“It was beyond our imagination to see Vaishali as a candidate,” her father says. “I am sure she will get good votes; the farmers will vote for her.” 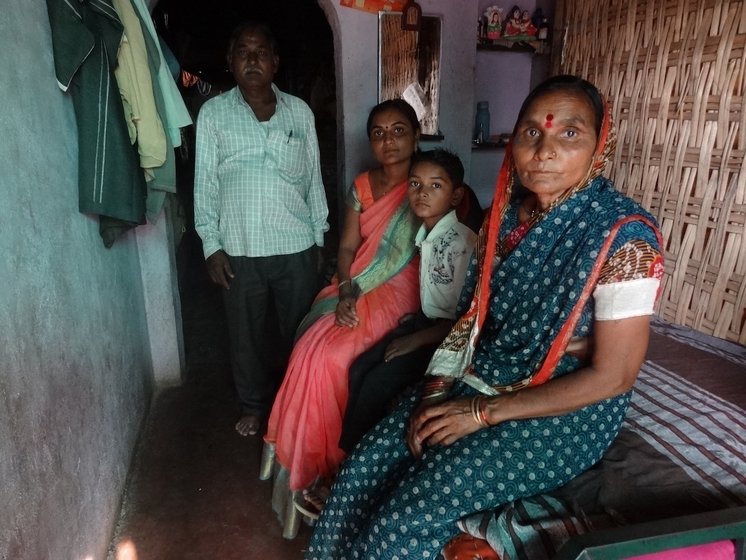 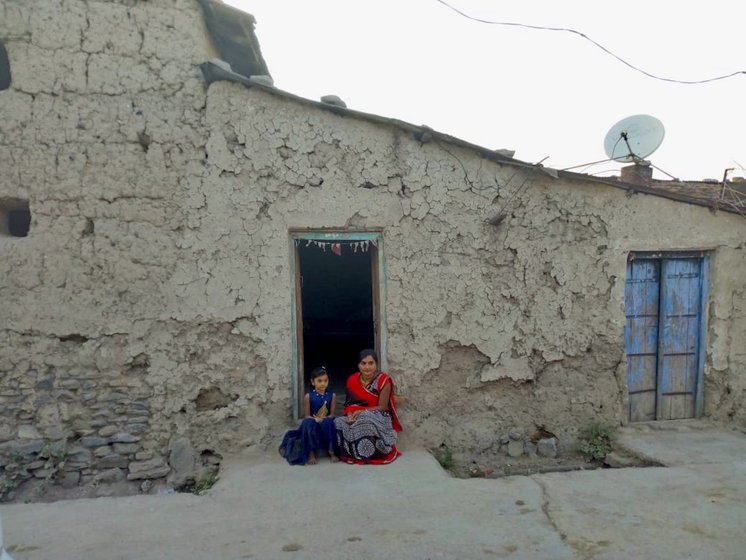 Left: Vaishali with her son Kunal, and parents Manikrao and Chandrakala Dhote at their modest home in Dongarkharda, Yavatmal. Right: With her daughter Janhavi at her in-laws house in Rajur village

But her candidature has put many in a bind. “My dilemma is peculiar,” says Nischal Thakre, the 30-year-old sarpanch of Dongarkharda. Should he go with emotions and campaign for Vaishali because she is from the village, or pragmatically  look at the larger development goals of his village – including roads, water supply and irrigation. “Because when I will seek my own re-election my villagers will ask me what I did for my village,” he says. He is hinting that the dominant candidate might win the Yavatmal-Washim Lok Sabha seat – and  that could influence the outcome of the Vidhan Sabha elections due in six months in Maharashtra and then the local body polls. “If you are sailing with the flow,” he adds, “it is easier for us to get funds for village development.”

Thakre is close to local leaders of the BJP-Shiv Sena, but can’t ignore the fact that Vaishali belongs to his own sub-caste of the Kunbi community– the Khaire Kunbis – that is dominant in this belt of Yavatmal district.

In the battle of the big and well-entrenched, Vaishali has neither money nor might. After the elections, she says, maybe she will have to return to her life of constant labour. But right now she is going to make every effort to reach out to the people in her constituency. Farmers’ problems won’t be addressed unless someone from among the farming community speaks for them, she says. “Who else knows the problems of farmers and women better than I do? If I get elected, I will raise the problems of my own people in the Sansad.”