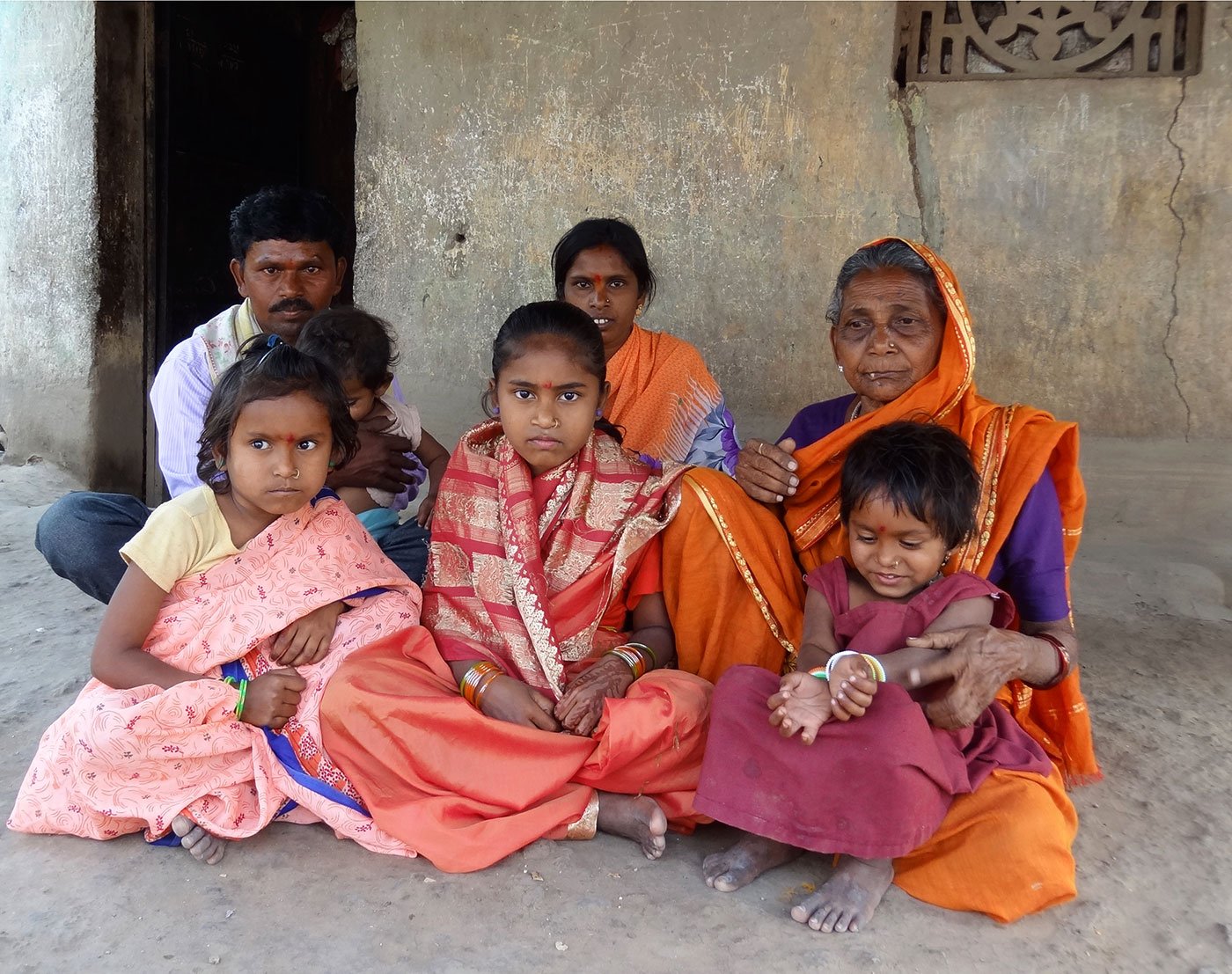 Fumes and fear in Yavatmal

This time, it was pesticide deaths of a different kind: poisoning by inadvertent inhalation. With the pink bollworm back and Bt-cotton’s failure, Vidarbha’s crisis deepens

From July to November 2017, the cotton growing districts of Vidarbha, mainly Yavatmal, saw a sudden spike in people coming to hospitals complaining of nervousness, dizziness, visual impairment and stomach aches. All were cotton farmers or labourers who had been contact-poisoned while spraying insecticides in their fields. At least 50 died, over 1,000 became sick, some for months.

In this second story in a three-part series, PARI looks at what has happened in the region and what the Special Investigation Team constituted by the Maharashtra government found.

Thereafter, we will explore the bigger story of why Vidarbha consumes so much pesticide. And why Bt-cotton – a genetically modified variety that claimed in-built resistance to bollworm – seems to have cracked under the attack of the old pest. The pink bollworm is back with a vengeance – causing widespread devastation.

Sanjay Bhorkhade is still to recover from the shock and fear of contact poisoning. “I almost lost my sight. I survived,” he says. “I still feel irritation in my eyes, and I feel fatigued.”

An Adivasi from the Andh community, 35-year-old Sanjay has been a farm labourer for over 15 years; he does not own any land himself. In all these years, he says, he had never seen such lethal effects of the chemicals he has been spraying.

The day he became sick, he had sprayed for 5-6 hours. This was in October 2017 when, on and off for a week, Sanjay sprayed a cocktail of pesticides on the 10-acre cotton farm in his village where he works on an annual contract. In this part of the country this system is called saldari . It fetches Sanjay an annual income of Rs. 70,000. Sanjay lives in Chikhali (Kanhoba) village in Yavatmal’s Ner tehsil . Of the village’s roughly 1,600 people, around 11 per cent are from the Andh and other Scheduled Tribe communities. 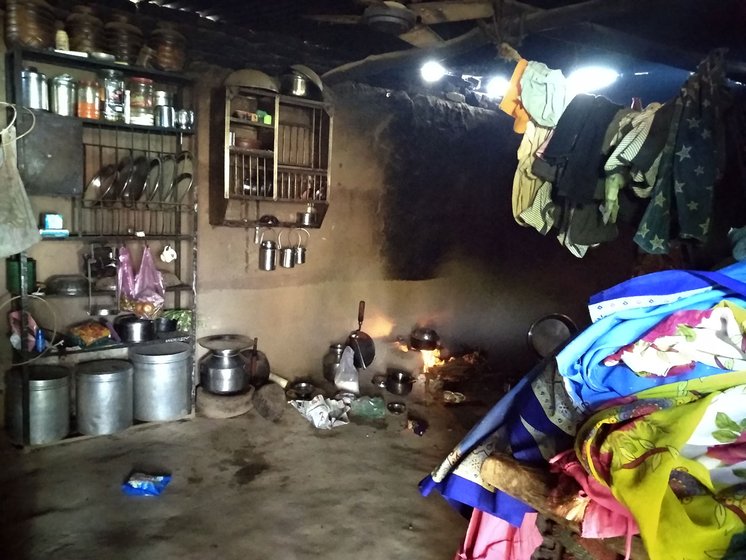 “I had been hearing about pesticide sickness and deaths from women in the village,” his wife Tulsa says. When Sanjay became sick too, Tulsa was terrified that he might lose his eyes. The days he spent in hospital were very difficult for the family. “It was my good destiny that he came back safe,” she says. “Otherwise how would I raise my children?”

Sanjay is the only income-earner in a family (featured in the cover image of this story) that includes Tulsa, their three daughters and a son, and his old mother. They live in a hut made of wooden poles, mud walls and a thatched roof. It’s inside are sparse – a few utensils, a cot – but full of the big smiles of their children.

Sanjay is nervous about recalling the disastrous episode that killed around 50 farmers and agricultural labourers in the western Vidarbha cotton belt, most of them in Yavatmal district. (See Lethal pests, deadly sprays ) They died due to accidental contact or inhalation poisoning between September and November 2017. Around 1,000 farmers and farm labourers became sick for months. (These numbers were collated by the state government from public and private hospitals.)

In a region notorious for farm suicides, this was pesticide poisoning of a very different kind.

“We had almost completed spraying on the farm one evening like we did every year,” recounts farmer and village sarpanch , Uddhavrao Bhalerao, on whose farm Sanjay works. Around 5 that evening, Sanjay came to his employer’s house with swollen eyes. Uddhavrao immediately took him on his motorbike to Arni town around 10 kilometres away. And from there to the Yavatmal District Government Hospital, another 40 kilometres away. “We had been hearing about the pesticide poisoning, but never thought it would come to haunt us,” Uddhavrao says. The entire hospital, he recalls, was full of farmers suffering from the effects of accidental poisoning.

It was a strange and shocking episode. “We used the same chemicals that we have been using for many years – non-localised plant poison and a couple of direct-action chemicals.”  The only difference this time, Bhalerao says, was the extreme humidity and robust growth of the cotton plants.

When I visited Chikhali Kanhoba in January, the farmers were still stunned by the lethal attack by multiple pests, including the pink bollworm, starting from July 2017. And the farm labourers were reeling from the aftershocks of accidentally inhaling the toxic fumes of a mix of insecticides.

Five workers in the village became sick during September-October, after spraying on the cotton plants that had grown unusually tall, thick and bushy. Four of them, including Sanjay, survived. But Dnyaneshwar Tale, 45, a marginal farmer from the Andh community, lost the battle after staying in hospital for over two months. He was first taken to the sub-district hospital in Arni on October 1, 2017. The next day, he was brought to the Yavatmal District Government Hospital. A month there and the hospital referred him to the Government Medical College and Hospital in Nagpur, where he died. 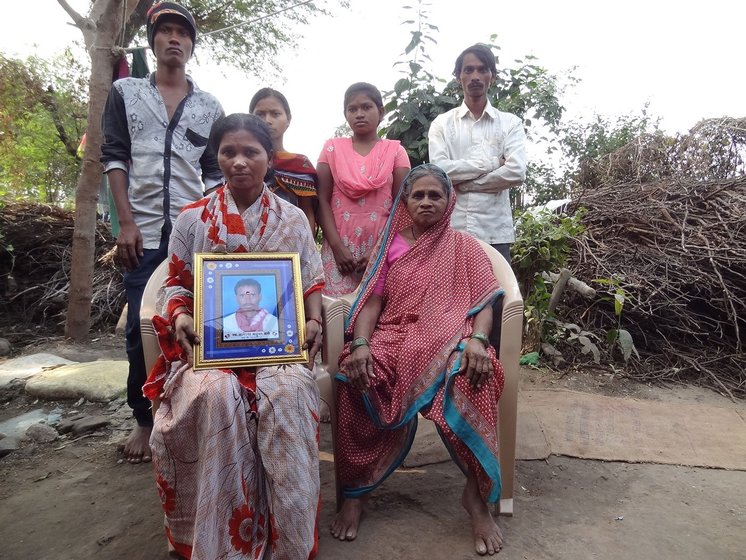 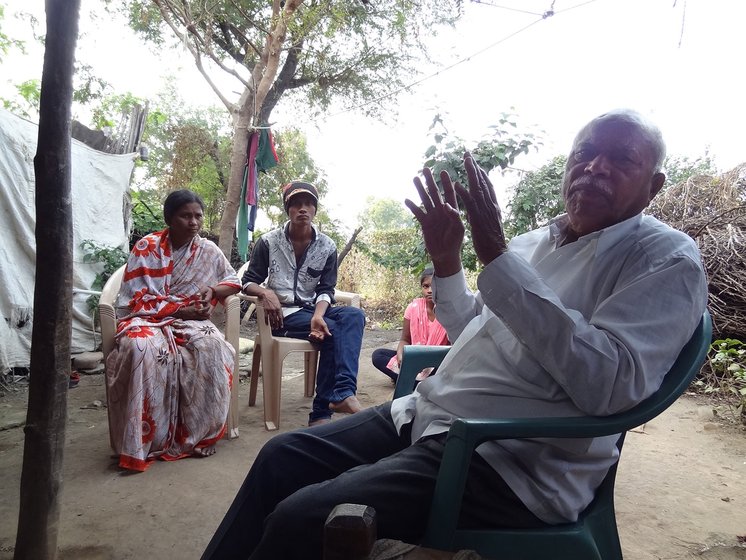 Left: The Tale family with a photograph of Dnyaneshwar. Right: Village s arpanch and land owner Uddhavrao Bhalerao at the Tale family home

“He would improve for a day and then slip back into a serious condition. We thought he would survive, but he did not,” says his youngest brother Gajanan, a farm labourer, who stayed with his brother in the hospital all through. Another sibling, Bandu, was also hospitalised with temporary visual impairment; he survived the toxic inhalation.

Dnyaneshwar’s complaints, like Sanjay’s, began with irritation in the eyes – and then spread. The insecticides left his immune system and vital organs irreparably damaged, and infections took over, the medical records show. The cause of his death, officially, was ‘septicaemia’.

His three children are now struggling with their education – and with the loss of their father. Komal, 19, is in Class 12, Kailash, 17, in Class 10, and the youngest, Sheetal, 15, is in Class 9, all studying in Arni town. What he could not do, Dnyaneshwar wanted for his children – go to school, become educated, prosper.

His widow Anita works as a farm labourer. His elderly mother Chandrakala has spent a lifetime toiling on others’ farms. “The entire village raised collections to support us,” says Anita, “but we also had to sell off whatever little gold we had, and borrowed Rs. 60-65,000 [from neighbours and relatives] for his treatment and other costs.” 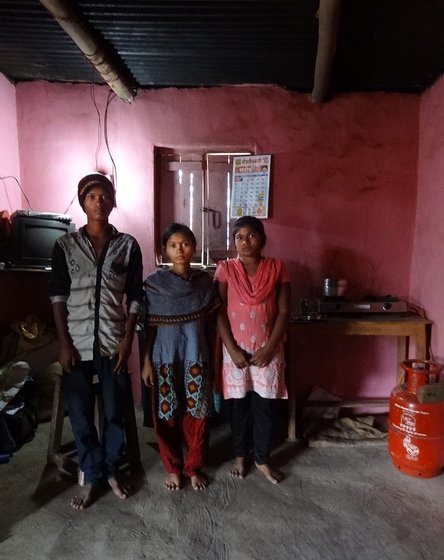 Dynaneshwar Tale wanted his children, Kailash, Komal and Sheetal, to get an education and prosper

“The September-November period was one of the most challenging times for our village,” says Bhalerao, who is highly respected in Chikhali Kanhoba. “We managed to save four, but could not save Dnyaneshwar.”

This challenging period had initially promised to be a good cotton year (July 2017-March 2018), but turned out to be one of the most devastating, with ferocious pest attacks. On Bhalerao’s farm too, an old pest – the pink bollworm – has returned after decades. The worm was last seen in the 1980s. In the 1990s, the use of synthetic pyrethroids, and the arrival of Bt-cotton after 2001, provided resistance to this pest. But now it has become immune to both, the pesticides and Bt. ( More on this in another series .)

A Special Investigation Team (SIT) constituted by the government of Maharashtra in October 2017, to probe the poisoning episode and suggest remedial steps to avert such disasters in the future, has submitted its report. Among other measures, it recommends banning monocrotophos, a popular but hazardous insecticide. (See SIT report: pest attack unprecedented, ferocious )

Bhalerao says the disaster will have huge consequences for the local farm economy. His cotton yield fell by at least 50 per cent this year – from 12-15 quintals on every acre of his 8-acre farm, irrigated by a dug well, to barely 5-6 quintals in 2017-18. On top of it, the quality of the cotton suffered due to the infestation. With low yields, less money flows into the local economy. A restricted money flow means lower wages or lesser work for farm labourers. Unless the government then generates work through MGNREGA-like schemes, this has a bearing on purchases, weddings, spending on infrastructure and other expenses – and an already-modest village economy shrinks further.

Additionally, Bhalerao says the deaths and hospitalisation will impact the relations between farm owners and farm labourers for years. The spraying of pesticides – a crucial task in the production process – is mostly done by labourers, who are now fearful of spraying. Even as the poisoning disaster was unfolding in Yavatmal, many farmers found it difficult to persuade labourers to do this work. With the spraying on hold, the pests intensified, further affecting yields.

“We will now have to win back the trust and faith of our farm helpers," Bhalerao says. "We will face the financial loss, but what about the loss of life? We were fortunate that we could save four lives, but we could not save Dnyaneshwar…”

Sanjay, also saddened that Dnyaneshwar did not survive, says, “One good thing was that it brought us together as a community in the crisis.” Everyone in the village stood by each other during that difficult hour. The landowners too provided money and moral support to the families of farm labourers. Sanjay is yet to return to work, and Bhalerao hasn’t insisted he restart. But his confidence is shaken, and he’s not sure if he will work on the farm again, let alone spray insecticides again. Or, he vows, “Next year I will take full precautions before I do the spraying.”