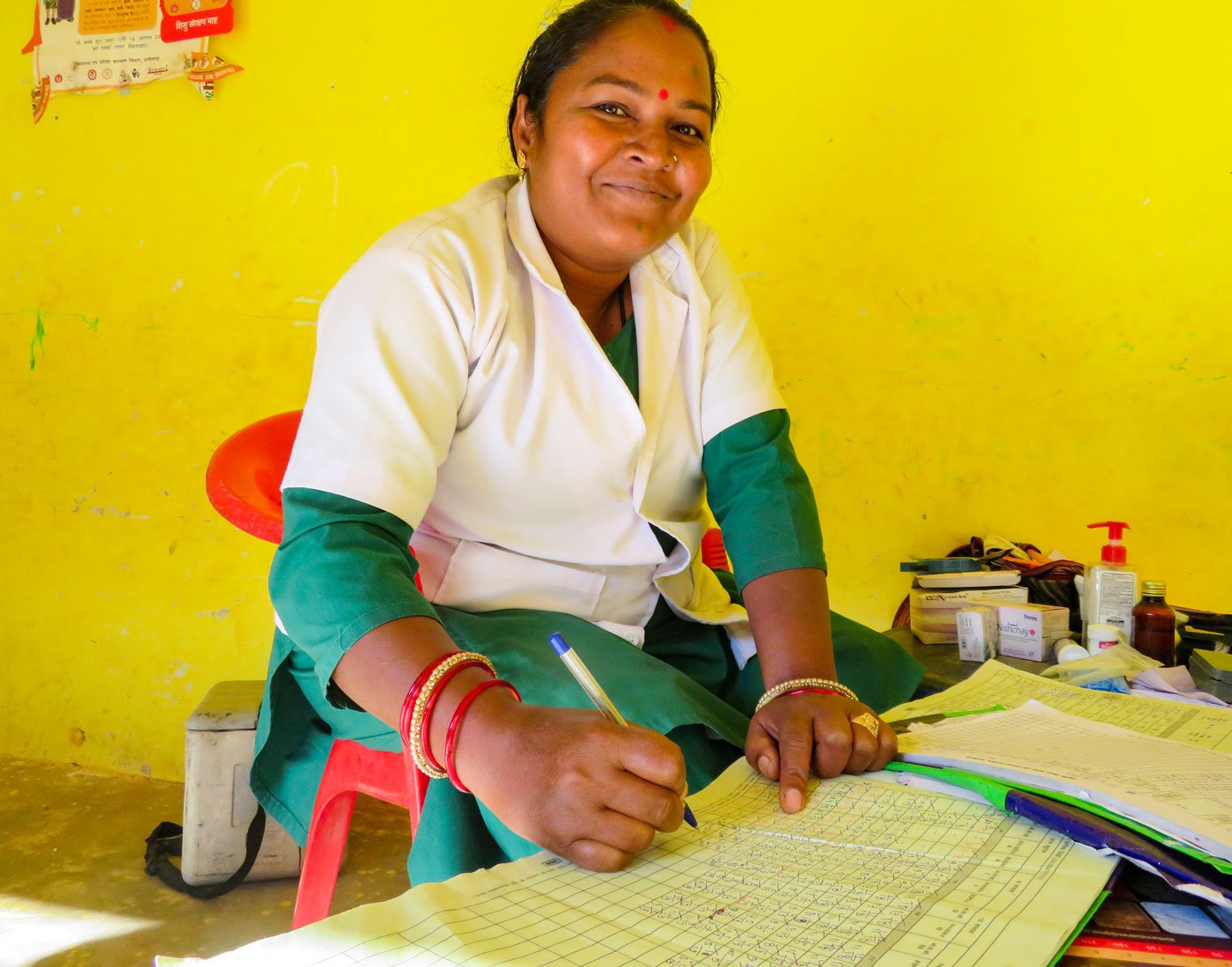 ‘Without RHOs we are helpless and hopeless’

As a senior rural health officer in an Adivasi belt of Chhattisgarh’s Narayanpur district, Urmila Dugga’s list of tasks is long – and it’s RHOs like her on the ground who keep the public healthcare system running

“You must always take them with something sweet like honey or jaggery,” says Urmila Dugga, rural health officer, watching Suhani, three years old, lying listless in her grandmother’s lap.

It takes the combined skill and loving persuasion of three women – the child’s maternal grandmother, another rural health officer (RHO) Savitri Nayak, and Manki Kachlan, the mitanin (ASHA worker) – to get the bitter malaria pills down the toddler’s throat.

Supervising the process, 39-year-old Urmila, the senior RHO, notes down the details of the case in a large register amid sounds of children playing in the compound in front of her. Her makeshift clinic is a partially covered verandah of an anganwadi in Naumunjmeta village of Chhattisgarh’s Narayanpur district.

On every second Tuesday of the month, the anganwadi doubles up as an outpatient clinic – with kids busy learning their alphabets while mothers, infants and others line up outside for check-ups. Urmila and her team of health workers arrive around 10 a.m., unpack their registers and bags with testing and vaccination equipment, shift a table and bench into the verandah, and get ready to meet their patients.

Suhani’s rapid diagnostic test (RDT) done that day is one of the roughly 400 malaria tests that Urmila and her colleagues, including RHO Savitri Nayak, 35, conduct in a year in the six villages in Narayanpur block that they are in charge of.

“Malaria is one of our biggest health problems,” says Dr. Anand Ram Gota, the chief medical health officer for Narayanpur district. “It affects the blood cells and the liver causing anaemia, and in turn leads to poor physical stamina. So wages also get impacted. Children are born with low birth weight and so the cycle continues.” 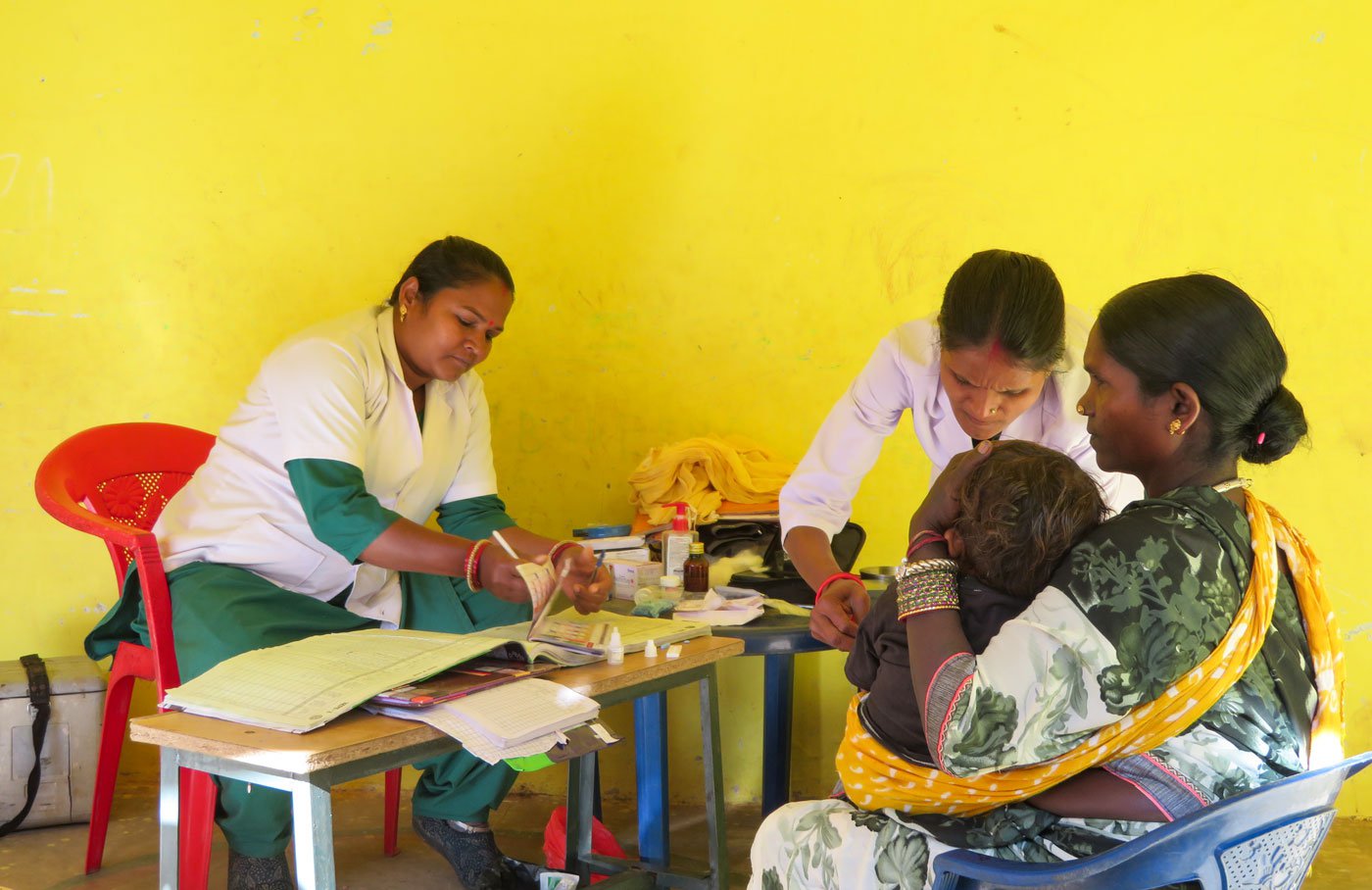 At a makeshift clinic in an anganwadi , Urmila Dugga notes down the details of a malaria case, after one of the roughly 400 malaria tests that she and her colleagues conduct in a year in six villages in Narayanpur block

In 2020, Chhattisgarh recorded 18 deaths from malaria – the highest in any state in the country; Maharashtra was second with 10 deaths. The National Vector Borne Disease Control Programme notes that 80 per cent of malaria cases are seen in ‘tribal, hilly, difficult and inaccessible areas’.

Later, Urmila will fill in the case details for the second time in large registers at the sub health centre (SHC) in Halamimunmeta – one of 64 such centres in Narayanpur district. Updating the registers takes nearly three hours of her day – it has to be done for every test, multiple immunisations, ante-natal and post-natal check-ups, malaria and tuberculosis checks and first-aid for fevers, aches and pains.

Urmila is also an auxiliary nurse midwife (ANM), having done a two-year training for that. As RHO, she attends further training camps for 1 to 3 days each about five times a year, organised by the state Directorate of Health and Family Welfare.

Male RHOs are trained as multi-purpose health workers for only one year. “It’s not correct,” Urmila says. “We do the same work, so the training [as qualification] should be the same. And why is that I am called ‘sister’ by patients, but the male RHO is called ‘doctor sahib ’? You should mention this in your story!” 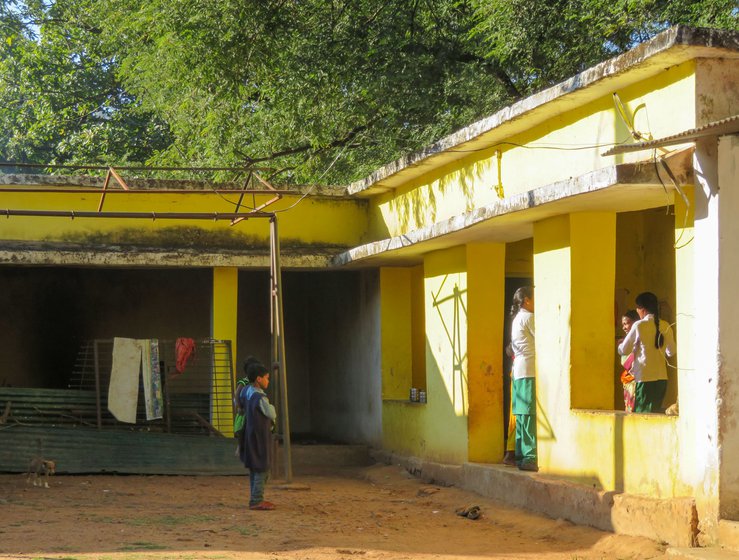 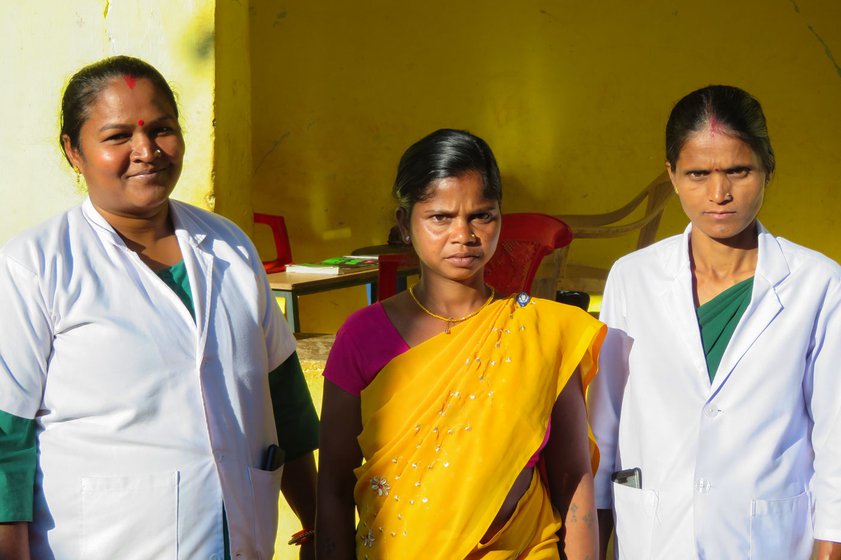 Once a month the Naumunjmeta school doubles up as an outpatient clinic for Urmila, Manki (middle), Savitri Nayak and other healthcare workers

By now, the children are back in their classes, reciting the alphabets. Seeing Suhani settled into a nap after her medicine, Urmila turns to the grandmother for a quick chat and some tips about malaria treatment and nutrition in Gondi. In Narayanpur district, 78 per cent of the residents belong to the Gond community.

“I am one of them [Gond]. I can speak Gondi, Halbi, Chhattisgarhi and Hindi. I need to, in order to communicate effectively,” Urmila says. “I have a little problem speaking English, but I can understand.”

These interactions with people are what she likes most about her job. “I like the part where I meet people and visit them in their homes,” she says. ‘I meet 20 to 60 people every day. I like to listen to their concerns and learn about their lives. I don’t lecture, or at least I don’t think so!” she says, laughing.

It’s past 1 p.m. and Urmila pulls out her tiffin with the roti and the seasonal green leafy vegetable curry she made that morning. She is in a hurry to finish lunch so that her team can get on the road for home visits. Urmila covers roughly 30 kilometres every day on her gearless scooter, with Savitri (who is from the Halbi Adivasi community) riding pillion. Most of their journeys between villages are through dense forest and they say it is safer in twos.

Moving about thus, in the course of their work Urmila and her team attend to the healthcare needs of around 2,500 people across six villages within a 10 to 16 kilometres radius. Most of the 390 households they visit are Gond and Halbi Adivasis, while a few families belong to Dalit communities. 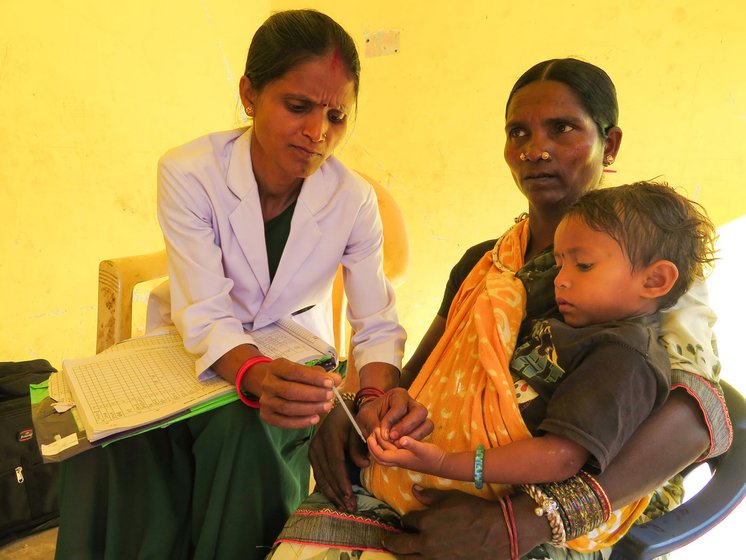 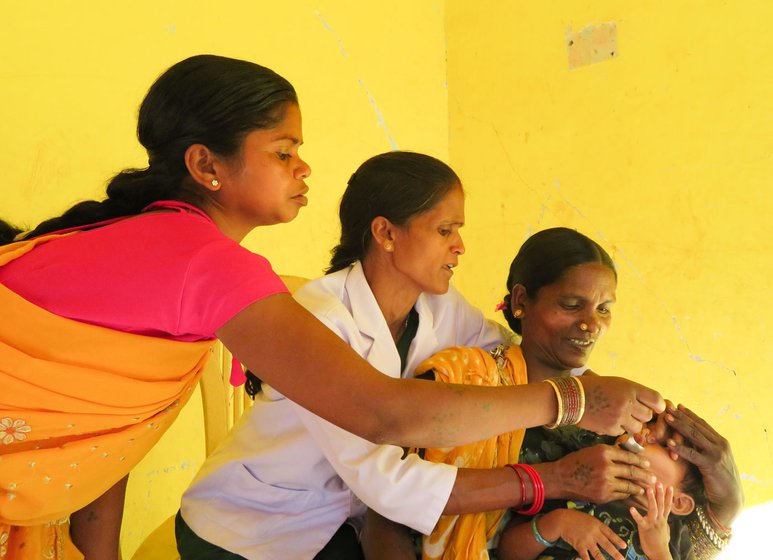 Their monthly visits, known as ‘gramin swasthya swachhta aahar diwas ’ (village health, sanitation and nutrition day), are held on one fixed day of the month in different areas. On this day, Urmila and her colleagues (a male and female RHO) check the groundwork done for many of 28 national programmes, including immunisations, birth registrations and maternal healthcare.

It’s a long list of tasks – Urmila and other RHOs are the executors on the ground of the public healthcare system, on whom rests the structure of supervisors, sector doctors, block medical officer and a chief medical officer in every district.

“RHOs are frontline health workers, they are the face of the health system. Without them we are helpless and hopeless,” says Dr. Gota, the CMO. Narayanpur district’s 74 female and 66 male RHOs, he adds, “keep an eye on child and maternal health, on mental health, tuberculosis, leprosy and anaemia. Their job never stops.”

A few days later, at Malechur village’s ‘health, sanitation and nutrition day’, roughly 16 kilometres from Halminunmeta, Urmila offers advise to around 15 women, most of them with young children.

Among those waiting is Phulkuwar Karanga, who is from the Ganda community (listed as Scheduled Caste in Chhattisgarh). A few days go, when Urmila was on a field visit here, Phulkuwar had told her about feeling weak and fatigued. Surmising that she is anaemic, Urmila had advised her iron tablets and she has come to pick them up. It’s around 2 p.m. and she is the last patient for the day. 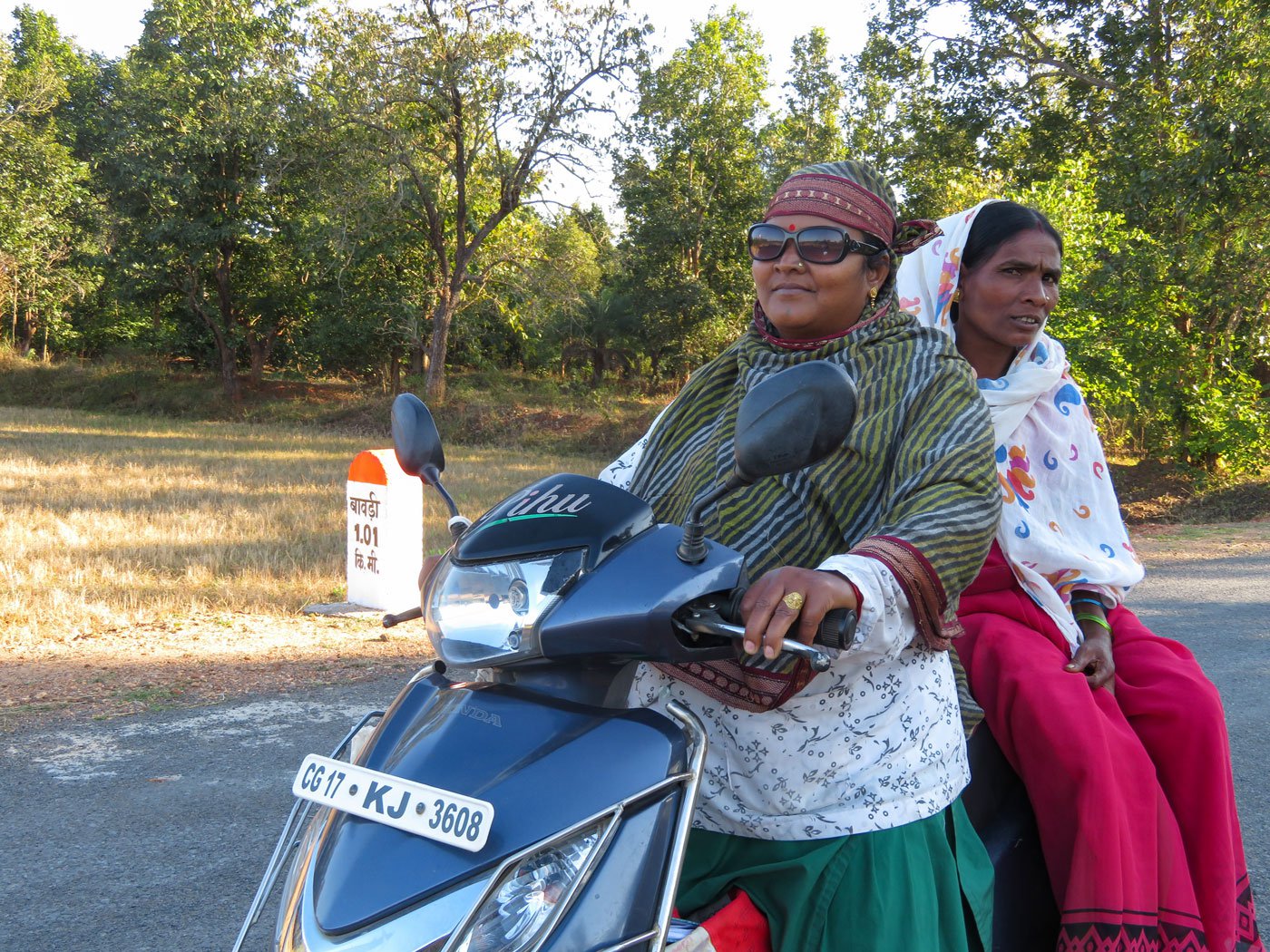 Urmila covers roughly 30 kms every day on her gearless scooter, with Savitri riding pillion. Most of their journeys between villages are through dense forest and they say it is safer in twos

Urmila says that addressing this condition in young girls before they get married is not easy. “Girls are married at 16 or 17 and they come see us only after they have missed a few periods and are most likely pregnant. I miss out on giving them necessary pre-natal supplements like iron and folic acid,” she says, writing the last few details in her registers.

Dispensing contraception advice is another big part of Urmila’s job, and one she wishes could have more impact. “I never see them before they get married so there is no time to speak about spacing or delaying pregnancy,” she says. So Urmila tries to visit at least one school a month to speak to young girls, and tries to engage older women and advise them in the hope that they will pass on some information to the younger ones when they go to fill water, collect fodder or meet informally.

Phulkuwar, now 52, was one of the first women – when Urmila was starting out as an RHO in 2006 – to agree to a tubal ligation. She had given birth to four boys and one girl in 10 years. She wanted to stop getting pregnant, knowing how her growing family would put pressure on the few bighas they own. “From arranging for my operation to taking me to the district hospital in Narayanpur, Urmila was there throughout. She stayed with me and brought me back the next day,” she recalls.

The bond between the two women held and when Phulkuwar’s sons got married and after their first child was born, she brought both her daughters-in-law to Urmila who explained the value of spacing their next pregnancies.

“I got pregnant every two years, and I know the toll it takes,” Phulkuwar says, as she tucks the iron tablets in a small pouch at her waist, adjusts her saree and gets ready to leave. Both her daughters-in law are fitted with copper-Ts, and both waited for 3 to 6 years before getting pregnant again. 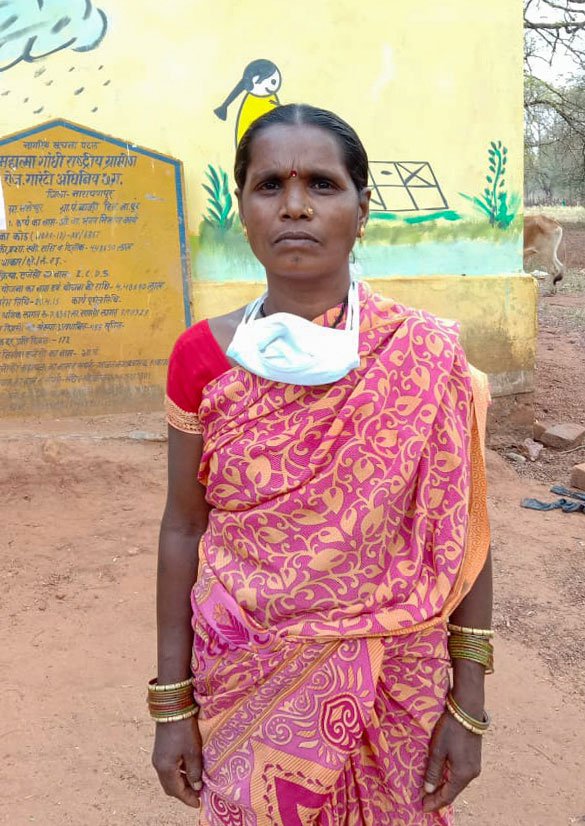 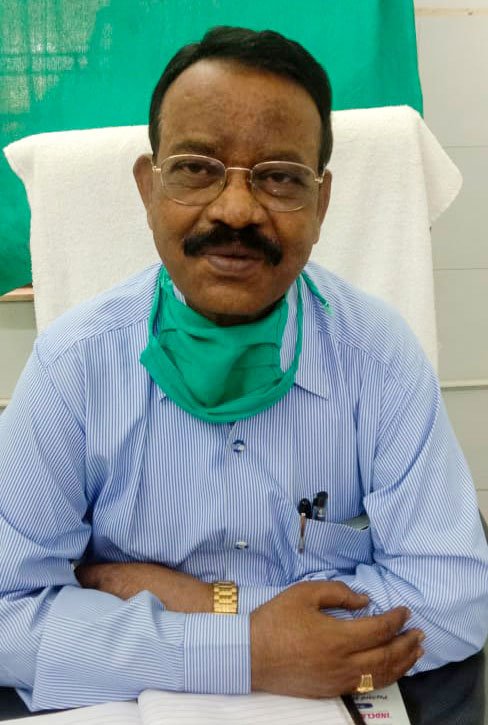 Left: Phulkuwar Karanga says, 'I got pregnant every two years, and I know the toll it takes'. Right: Dr. Anand Ram Gota says, 'RHOs are frontline health workers, they are the face of the health system'

In a year, Urmila sees at least three instances of unwanted pregnancies among unmarried girls who are 18 or younger. Most of them are brought in by their mothers and are keen to abort. The abortions are usually done in the district hospital. Urmila says they play ‘ lukka chhuppi’ (hide-and-seek) with her about their condition. “They angrily dismiss my diagnosis of pregnancy and go to the siraha [local healer], or they visit temples and pray to ‘restart’ their menstruation,” she says. NFHS-4 notes that 45 per cent of abortions in the state were performed at home.

The RHO reserves her most scathing comments for the men she never sees. “They rarely show their faces here [at the SHC]. Men think pregnancy is a woman’s problem. A few men will go in for a vasectomy but they generally leave it to women. They [husbands] depute their wives to procure even condoms from the sub-centre!”

In a year, Urmila estimates, maybe one man in her work area undergoes a vasectomy. “This year [2020] not one man in my village went for it,” she adds. “We can only advise, we can’t force, but hopefully in the future more will come forward.”

Her long work day that began before 10 a.m. is drawing to a close at about 5 in the evening. She returns to her home in Halamimunmeta at around the same time as her husband, 40-year-old Kanhaiya Lal Dugga, a policeman. Then it is time to sit with their six-year-old daughter Palak to supervise homework and to do some housework.

Growing up, Urmila knew she wanted to do something for her people and says she loves her work though it is demanding. “This work brings me a lot of respect. I can go into any village and people will welcome me into their homes and listen to me. This is my job,” she says.