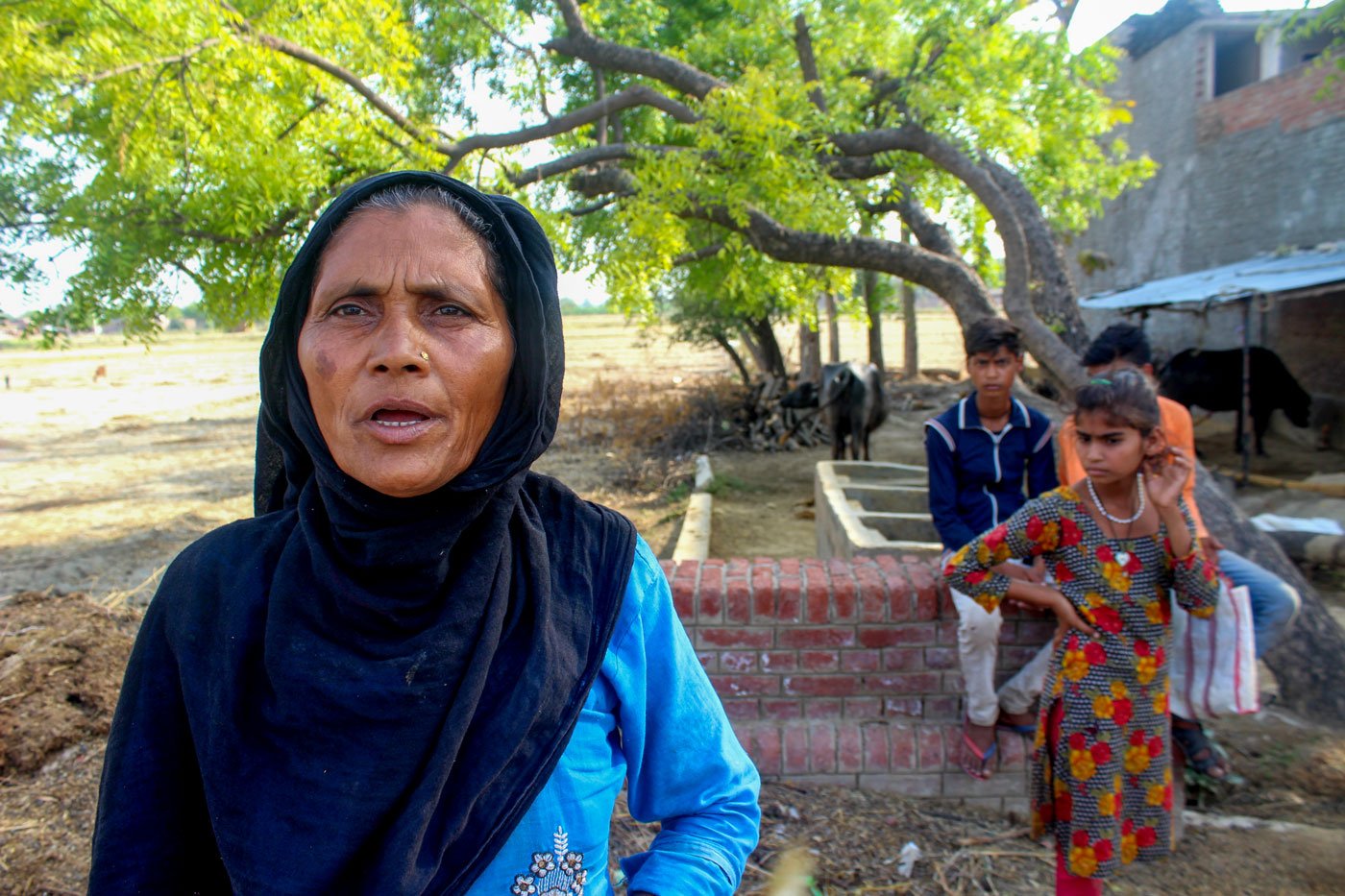 In UP, Covid-19 survivors, including returning migrants, struggle with costly treatment, dirty quarantine centres, social stigma, even religious discrimination. Many long to go back to their host towns

For over a month now, Nisha Yadav has walked that extra mile for her family’s rations. Their neighbourhood kirana store won’t sell them any groceries. “Ever since Papa was hospitalised, Rajanwala [the grocery store owner] doesn’t let us into his shop,” she says.

“My father tested positive for Covid-19 in late June, but has recovered fully,” adds Nisha. “The rest of us maintained the two-week self-isolation period. Though Papa recovered over a month ago, the store owner still says that we’d be spreading the virus if we enter his shop. So now one of us has to walk through knee-deep muddy water in these rains and floods to pick up groceries from relatives who live nearly one mile away.”

Nisha, 24, who dropped out of school after completing Class 11 six years ago, lives in Sohsa Mathiya village of Hata block in Uttar Pradesh’s Kushinagar district. Barely 60 kilometres from Gorakhpur town, her village has been badly hit by the monsoon and floods.

“Our bua-fufa [aunt-uncle] buy the provisions for us and we pay them later.” Even as she’s speaking, Nisha is folding the bottom of her salwar 3 three or four times – she’s going to be walking through the flood waters to their home. Her family has run out of sugar for the evening tea. 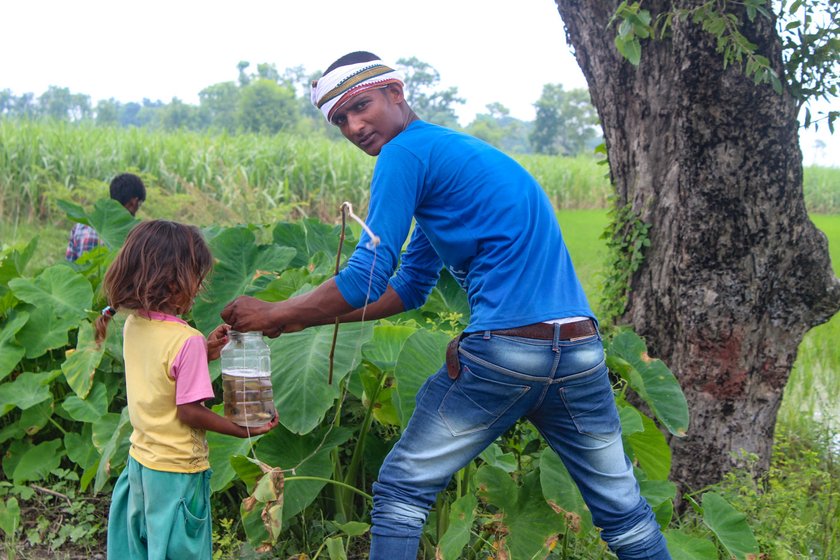 'We don't think of studying as a priority anymore', says Anurag Yadav

Nisha is the eldest child of Brajkishore Yadav, 47, the only earning member of the family, who returned from Delhi in June. In the capital, he worked in a jeans-making factory, making around Rs. 20,000 a month. Nisha’s mother died six years ago of a snakebite. Since then, she has been taking care of her two younger brothers. Priyanshu, 14, is in Class 8 and Anurag, 20, is in his second year BA.

Both are struggling now with the lockdown. In a family unsure of having two meals a day, there’s little chance of their owning a smartphone and accessing an online education. Their migrant labourer father has an ordinary cellphone. Neither boy could pay the fees for their upcoming new sessions.

"We won't study this year. We don't think of that as a priority anymore. Maybe, next year, we will," Anurag says.

“Papa returned in late June and got tested at the school used as a quarantine centre for returning migrants. That was a quick [rapid antigen] test and it read positive, so he was detained there. A week later, on the more elaborate [RT-PCR – reverse transcription-polymerase chain reaction] test, he recorded negative. So he was released early, on July 2. He is fine, but we still suffer the stigma.”

“I had to pay 4,000 rupees to a truck driver, to come to Gorakhpur from Delhi,” says Brajkishore. “Then 1,000 rupees to the Bolero- walla who got me here to my village. That came from the 10,000 rupees I had borrowed from friends in Delhi. I needed that as the children have been eating only dal-roti or namak-chawal. But I was left with just 5,000 and that too has gone due to this corona disease. The medicines cost a lot. I also spent 500 rupees to return home by an autorickshaw after being discharged. And I have no work now.

“Tell me, when can I go back to Delhi?” he asks. “Here, instead of helping and supporting us, the neighbours and shopkeepers boycott us. How am I at fault?”

“There are no big factories in this district or nearby, else we would not go so far from the family and suffer like this," says Brajkishore.

Sooraj Kumar Prajapati has been drinking less water than usual for some days now. He fears that even when cured of Covid-19, he might contract other diseases because of the unhygienic conditions of his quarantine centre. “The water is unfit to drink. The sink and taps are covered in paan-gutkha spit. If you see that, you would prefer staying thirsty to drinking here,” he says.

‘Here’ is the St. Thomas School in Khalilabad block of Uttar Pradesh’s Sant Kabir Nagar district, where Sooraj is quarantined after testing positive for Covid-19 at a government medical camp. The 20-year-old second year BA student got himself tested when he began coughing a lot.

“My parents, two brothers and a sister, all live in Khalilabad town. [His siblings, all younger to him, study in government schools.] My father sells chai-pakoda at the chauraha – earning very little these past few months,” says Sooraj. “Nobody has been on the roads – so who would buy? Some sales began in July, but that’s very limited. Saturdays and Sundays are anyway closed [for non-essential businesses, by government order] due to the lockdown. I can’t ask my father to send me bottled mineral water every day.” 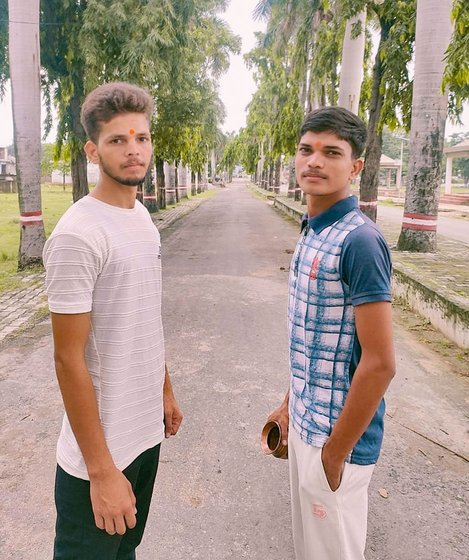 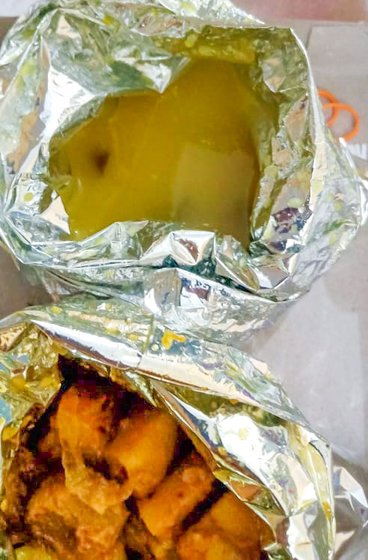 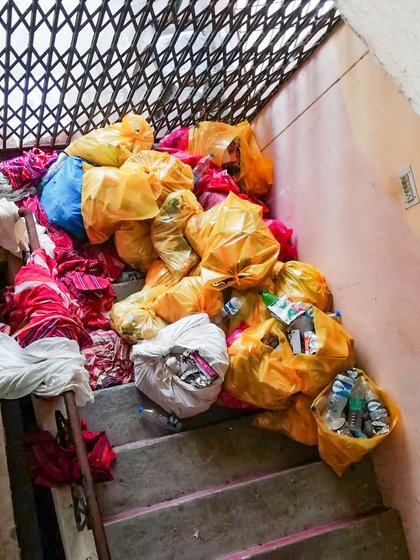 Sooraj Prajapati (left), in happier times. Now, he says, 'Food is not a problem here [at the government medical centre], but cleanliness definitely is'

Sooraj and some 80 others were quarantined in the school after testing positive for Covid-19 in ‘quick’ [rapid antigen] tests. He shares a room of around 25 feet by 11 feet with seven others.

“We get chai with bread pakora for breakfast at 7 a.m. and then dal-roti or chawal at lunch at 1 p.m. in the afternoon. We start feeling hungry much earlier, though – we’re young boys, after all, you see,” he giggles. “Again, in the evening we get chai and [a dal-roti] dinner at 7 p.m. Food is not a problem here, but cleanliness definitely is.”

There are piles of garbage outside almost every room of the school. Boxes of the food given to inmates, leftovers and waste, disposable cups in which they get kadha (water boiled with herbs-spices) and chai , all along the corridors. “I have not seen anyone doing jhaadu even once in these past eight days. We hold our noses while using the dirty toilet – there is only one in the entire quarantine centre with 5-6 urinals. The women's toilet is locked as there are no women here. Sometimes I feel pukish.

“We complain in vain to the attendants, but fear offending them. What if they stop giving us food because we speak out? I guess jails must be like this. Only, we have committed no crimes,” says Sooraj.

An angry Iddan stood outside her home in Ghatampur block of Kanpur district, waving medical reports showing she had tested negative for Covid-19.

She had returned to her home here in Padri Lalpur hamlet from Surat in Gujarat, with her husband, who is in his 50s, and their 30-year-old son, on April 27. She has not earned a rupee since then. “The return journey [around 1,200 km, across two nights and three days] was bad, 45 people packed into an uncovered truck, but coming back was our worst decision,” she says. “We had been in Surat nine years, working at a thread factory there.” They had left UP because they earned so little as farm labourers here.

She is standing outside a light-blue house whose external walls had probably never seen any plaster coating. A few children have gathered around us, drawn by Iddan’s animated, even agitated, tone. 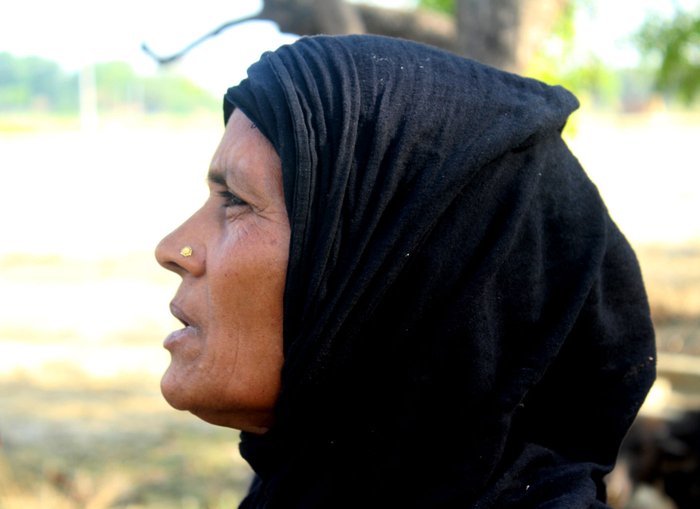 An angry Iddan waves her medical reports outside her home

'We are Muslims,' she [Iddan] says. 'And so we are being turned away. Others who are not of our religion are finding work. Recently, my son was refused service at a barbershop. He was told ‘you people’ all carry the coronavirus'

“Here, for farm work this season, we’d at best get 175-200 rupees on good days. But that work does not happen 365 days. That is why we had moved to Surat years ago – when wages here were even lower.”

A confident woman, in her mid-50s, she says she has no last name. “Iddan is all I write on my documents.”

Her husband, who she didn’t want to name, was declared Covid-19 positive after mandatory tests on returning migrants at a government camp in the first week of May. “Life has been hell since then,” she says.

“His getting the virus was stressful, but the real problem began after he recovered. When my son and husband sought work as farm labourers, they got bullied by landowners who accused them of spreading the virus. One maalik warned me not to even step on to his fields and then told other landowners also not give us any work.

“We are Muslims,” she says. “And so we are being turned away. Others who are not of our religion are finding work. Recently, my son was refused service at a barbershop. He was told ‘you people’ all carry the coronavirus.”

Iddan’s husband tested again for the virus at a government camp towards the end of May and was found negative this time. She holds out a document – “See, you read the names, I can’t read English. But I know the doctors say we are all healthy now. Why this discrimination then?”

Iddan has taken a loan of Rs. 20,000 from her sister-in-law to survive these tough times. “She married into a better-off family. But I’ve no idea when we can repay her. Maybe once we go back to work at the thread factory...”

Iddan just can’t wait to go back to Surat.